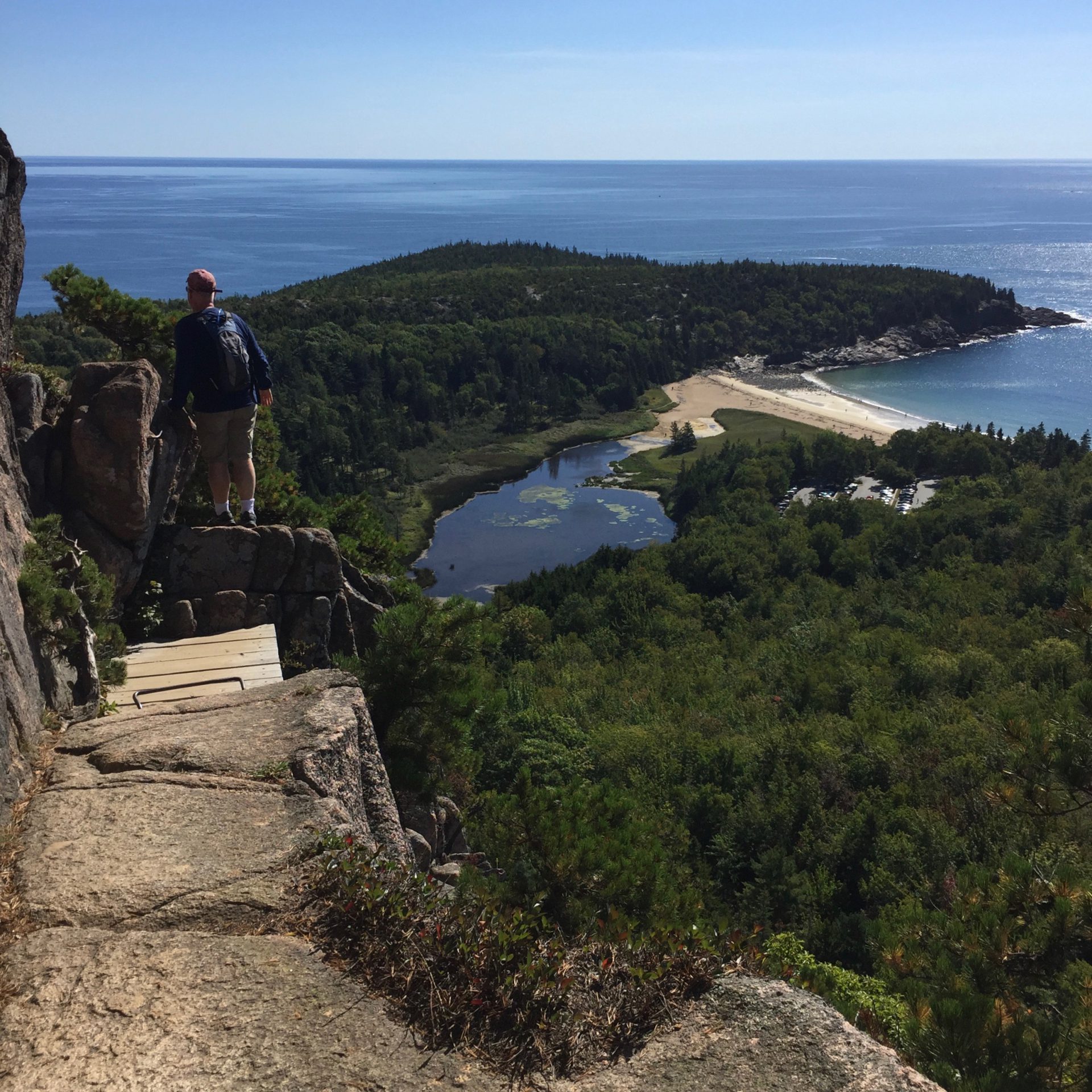 the early part of our second week at acadia was pretty chill. not too much to report. on wednesday, though, derek’s parents rolled into town. the kids were SOOOOO excited. after they were settled in, the kids had transferred the entire contents of our trailer into their cabin, and an epic sleepover began.

derek and i stopped by for some breakfast the next morning, but then we had a few hours to ourselves. it was beautiful and i had been pining for a more treacherous hike. it’s hard to be in these beautiful places but limited to kid friendly activities. so, after some research and planning for time constraints, we settled on the bee hive trail. it’s a 1.5 mile loop that goes straight up (well zig zags up) the side of a beehive shaped mountain, complete with ladders and bridges and general danger of falling to one’s death.

this was the view from the parking lot.

after a short little hike from the road, you come to a fork. turn right and you’re heading up the rock face. go left and take a still-pretty-strenuous, but less dangerous trail around the back and to the top. derek went straight and planned to meet me at the top. i went right and hoped he was correct.

the views, when i could safely stop to enjoy them, were amazing. my pics do not do them any justice.

the first obstacle. this grate. there was a 15 foot or so drop beneath it. the rock face on the left angled out, so it was a little awkward, but good “practice” for what was to come.

i stopped for some selfies, to try to document the beauty and the danger.

there were lots of ladders and iron rungs to hold onto when there was climbing involved.

down below, derek waited long enough to take a picture of me starting the journey up. i’m in the green shirt on the bottom. you can see other folks dotting the rock face on various other points on the trail.

back to my vantage point. more views and cliffs.

another selfie. i’m decidedly more tired. and terrified. i think it shows.

derek used the “find my friends” app to see my location. we thought it was amusing.

this was probably one of the scarier parts. the little bridge messed with your head and turning that corner into the unknown was slightly terrifying.

another cliff’s edge view. that’s sand beach down there, which i’ve blogged about before.

most of the way up, i was near another couple and we started chatting a bit. they were very sweet and offered to take this pic while we rested up in a safe spot. 🙂

panorama of the view from the safe spot.

from there, it was mostly climbing ladders and rock scrambles to get to the top. i didn’t stop for pics for safety reasons. ;). at the top, derek was waiting for me, as planned.

we took some commemorative pictures.

and tons of pics of the view.

the walk down was a lot easier. sort of. i was a little jelly legged from the climb up. and my shredded knees were aching a bit. going down is hard on them. so i managed to roll my ankle. good times. anyhow. we made it back to where the trail had split. joked about heading back up. and derek took this pic of the warning sign.

and one last pic for old times sake.

and one last selfie. i lived!!

i would definitely do this again. the scariest part turned out to be the unknown. anywhere dangerous had rungs. and it was shorter than i thought it would be. it’s definitely no place for kids that are my kids’ ages. or for folks with a fear of heights, i suppose.

anyhow. we raced back to the camper. showered. and met up with the grandlidboms and the lidkids for the next adventure…