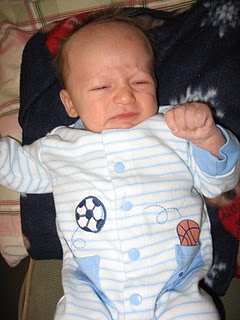 So, the boy cried today.
All day.
While he was getting changed.
While I drove.
While he ate.
So, I figured, I might as well give him a bath, since he was going to cry anyways. He didn’t cry for the bath. I don’t get it.

He only slept from 1pm until 2:30 and then again from 5:30 until 7:30. That would be 3.5 hours since 6:15 am, when he woke up. Of course, there were a few minutes here and there, but the second I would lie him down, the sleeping would end, and the crying would begin.
There hasn’t been a day where I have counted down the minutes until Derek got home like I did today.

Derek’s walking with him now. I don’t know if we’ve just already spoiled him, or if he’s just a not-so-content baby. He has to be entertained every waking moment of his life. There’s no sitting still and holding him. And there’s certainly no putting him in a swing or lying him under a mobile and letting him gaze away. He’s definitely difficult.

The boy is the hardest thing I’ve ever had to do in my entire life.