Isaac finally went to sleep last night around 11 or 12. I don’t know exactly, because I was in bed, while Derek was on duty. He woke up around 1, and I took over. He ate and slept until about 5. I fed him again and he sort of slept until 7. He stirred often and had to be patted back to sleep.
Now he just ate a big breakfast. That’s another thing we’ve been battling with – he likes to eat an ounce, cry, get changed, cry, eat another ounce, doze off, wake up, cry, eat another ounce, etc… So, hopefully, this is a sign that we can get him back on to bigger, more structured meals – instead of being a grazer. But, the best news of all, is after he ate, Derek put him in his swing and he sat and watched the spinning fish and then fell asleep! He’s been sleeping for about a half an hour and it’s so so so so nice and peaceful. I’ll enjoy it while it lasts…. 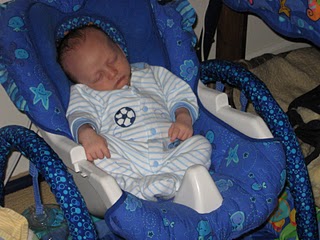