We had Isaac’s birthday party last night. It went pretty well. It was all of his NC family. He wasn’t really interested in very much of the birthday type activities. He mostly just wanted to play with Caison.

He sat totally still during “Happy Birthday to You” and then tried to exstiguish the candle using his fingers. Actually eating the cake was another story. He wasn’t interested in the least. He was obsessed with Caison’s sippy cup, so we finally had to get him out and give him a sippy cup of his own (which is funny, because he normally balks at a sippy cup). Anyhow, here’s one of the many unhappy cake shots: 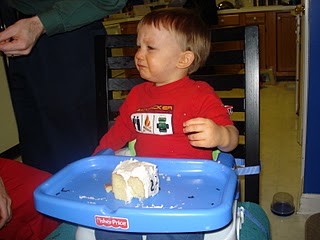 Dinner went much better. The boy ate a TON. He even ate some noodles and sauce. Probably about 10 rotinis. He’s not a big fan of grownup food. He likes his smashed peas, that’s for sure! 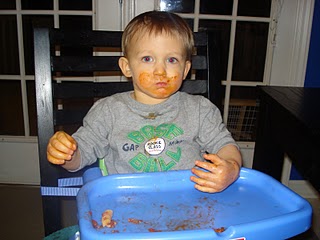 He also wasn’t too thrilled about opening presents. He did enjoy is Little People Ark, but even more than that, he liked the card that came with it, complete with things to try to rip off: 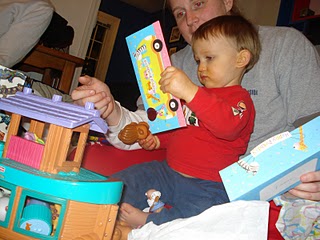 And this was the toy of the night. It’s a nice (noisy) little car, and boy does he love to push around cars! 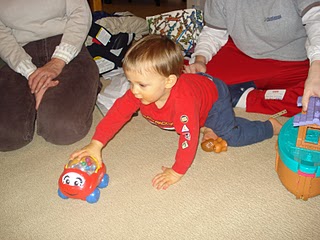 I don’t have time to do it right now, because the little one is banging frantically on his crib, ready to get up, but check back soon at our picasa site and hopefully I’ll have more pictures of Isaac’s big day.