I don’t know if I’ve made any mention at all about Isaac’s recent allergy escapades, so I’ll try to sum it all up here.

About a month and a half ago, Isaac broke out in hives. We went to the doc. He prescribed Zyrtec. They went away. He went off the Zyrtec. All was good for a week or so. Then he broke out again. The Zyrtec didn’t work. Back to the doc. He prescribed Allegra and an Epi Pen in case of emergency. He also set us up with an allergist. The Allegra kind of works. He still gets some occasional blotches. And we forgot to give him his dose on the trip home from NY and he completely broke out the next day. But, now, he’s been off the Allegra for a week, b/c we have the allergist appointment today and he seems no worse than when he was on it (occasional spots).

Throughout this, I’ve tried cutting back on the foods that he eats, to point of only eating baby food that he was eating at 12 months. We changed sunblocks. I used Johnson and Johnson soap only…. All with no visible result. Except for: I stopped giving him his vitamin and I think that may have been a significant part of the culprit.

Anyhoo… we’re off to the allergist at 10:15 and hopefully we’ll get some answers. Until then, here’s some pics of the boy, after two seperate breakouts: 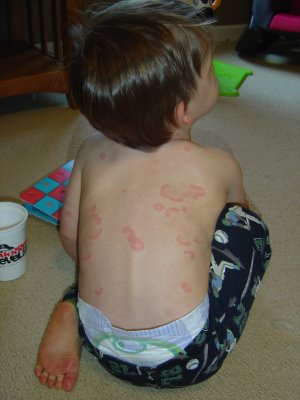 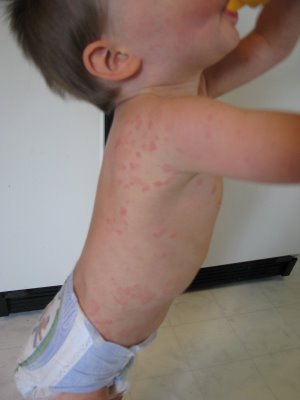