our departure from mount rainier marked a crazy whirlwind week of travel, taking us from rainier to salt lake city by the end of the week. our first stop on the itinerary was a two day visit to mount st. helens.

the travel day from rainier to mount st. helens wasn’t too long, but the day was sort of overcast and foggy (as it seems to often be in the pacific northwest). so, we stopped in at a visitor center, to learn a bit about the history and geology of the area and get our bearings for possible activities. there was a pretty cool exhibit, detailing the 1980 explosion of this giant volcano. first up, going inside the volcano. 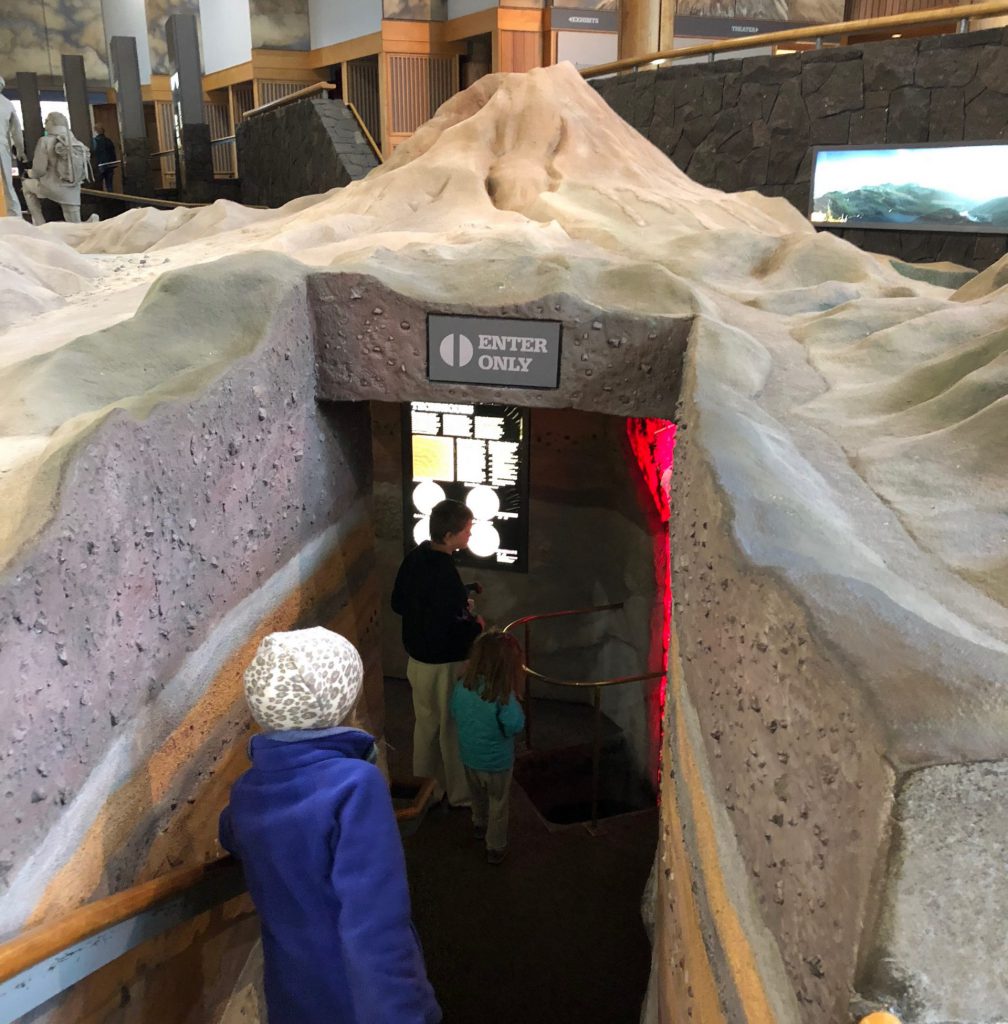 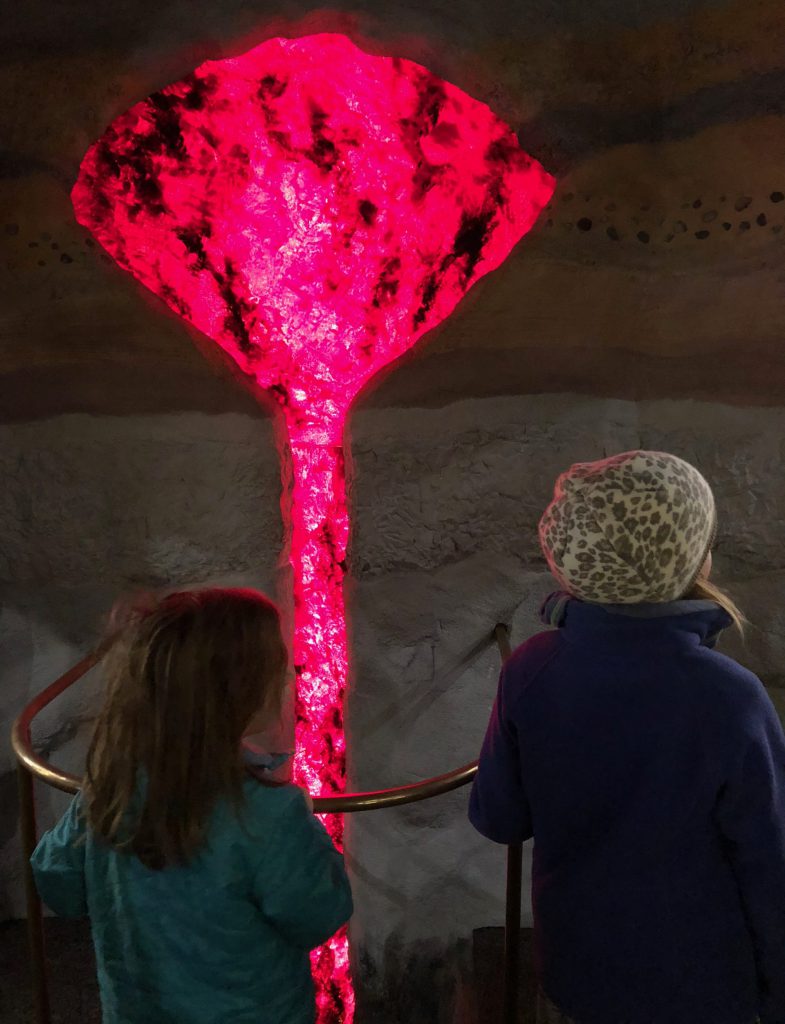 we read the timeline of the days before the explosion and then about the aftermath. 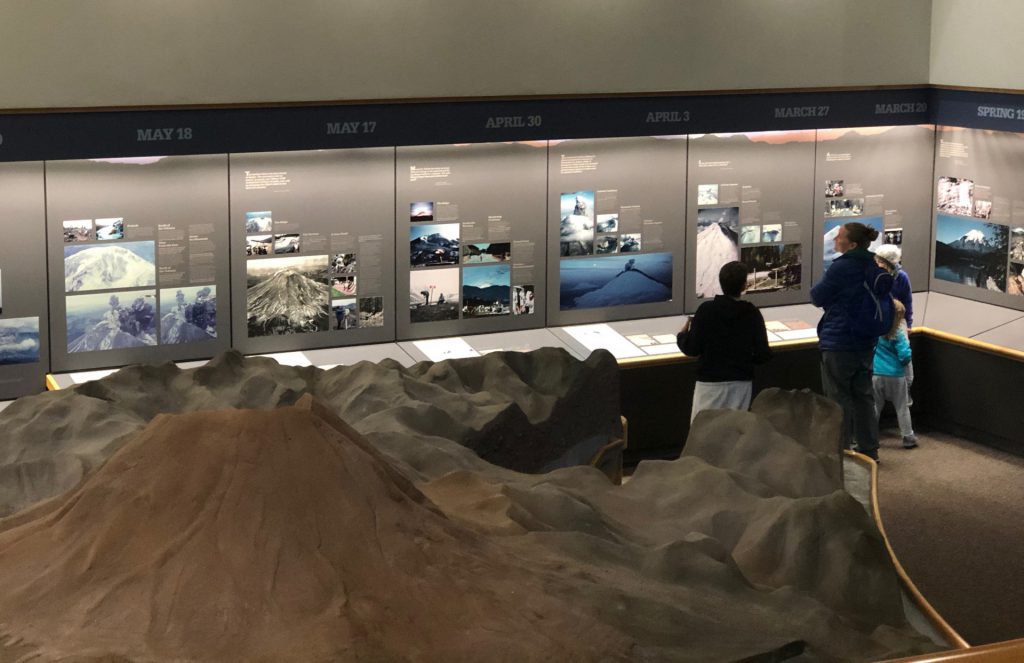 layers of soil and rock.

even though it was technically a washington state park, there was a junior ranger book and badge that the kids worked hard on (and got really frustrated with). 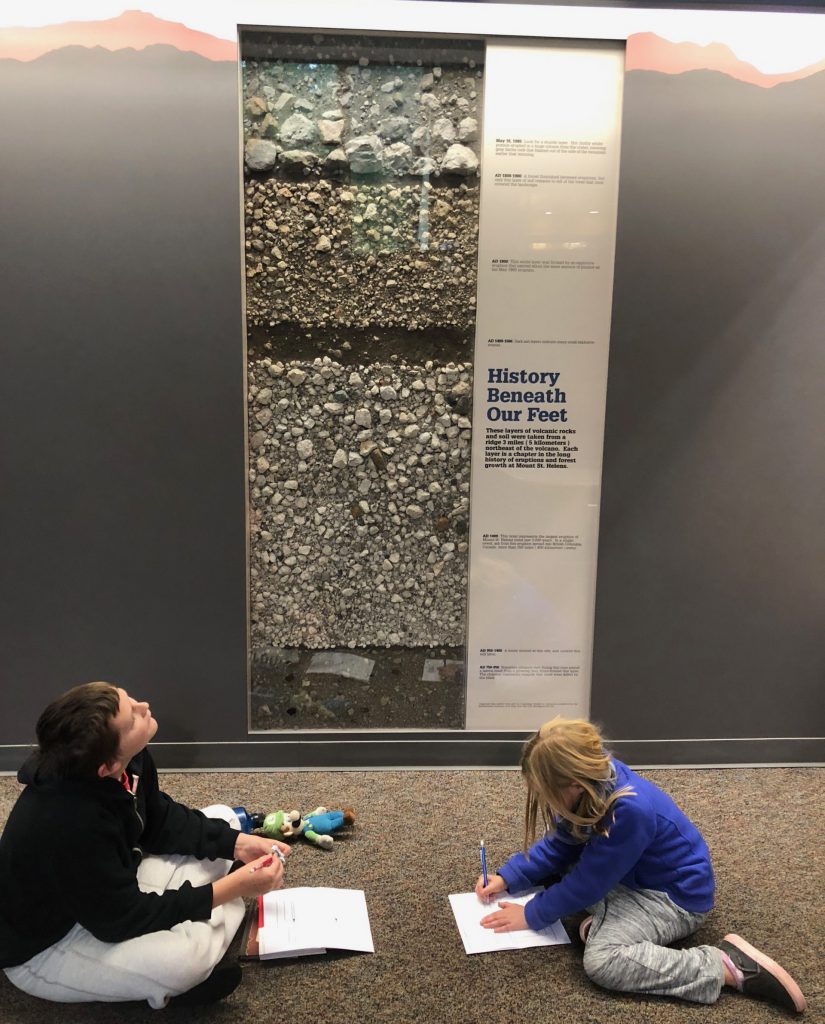 despite the frustrations, the book was eventually completed, and badges were obtained. 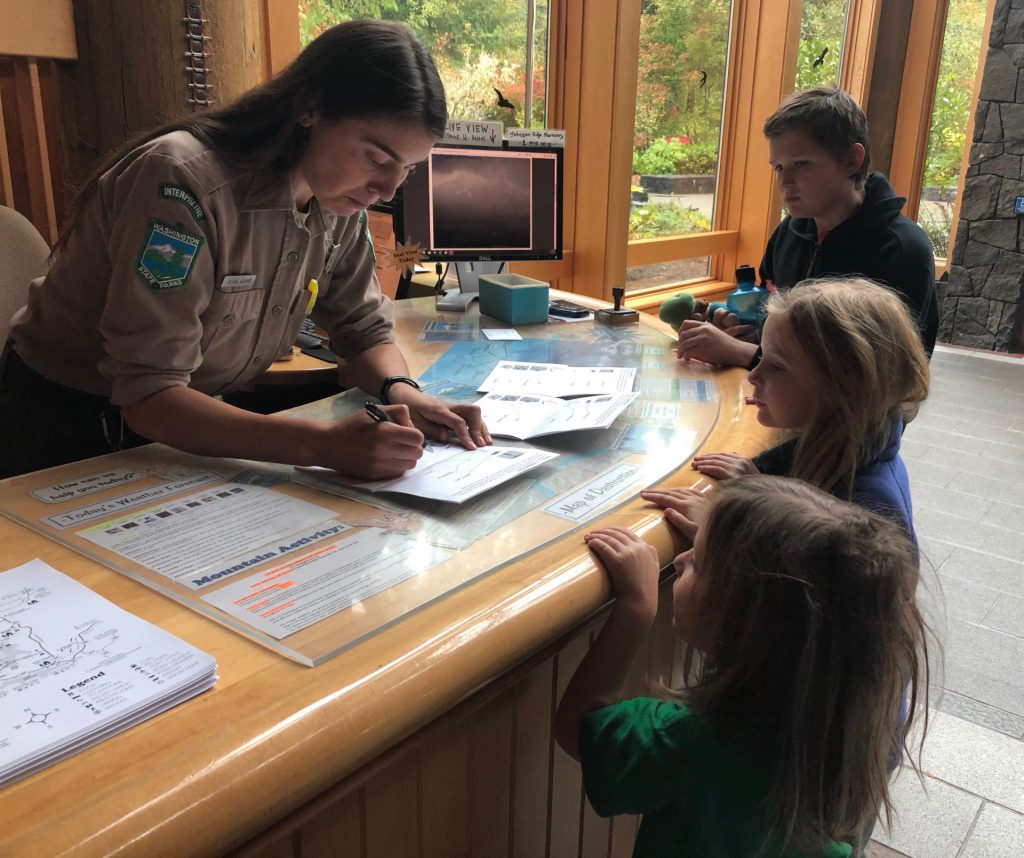 that evening, i made the executive decision to try a keto pumpkin cookie recipe. anna, as always, was my faithful sous chef. 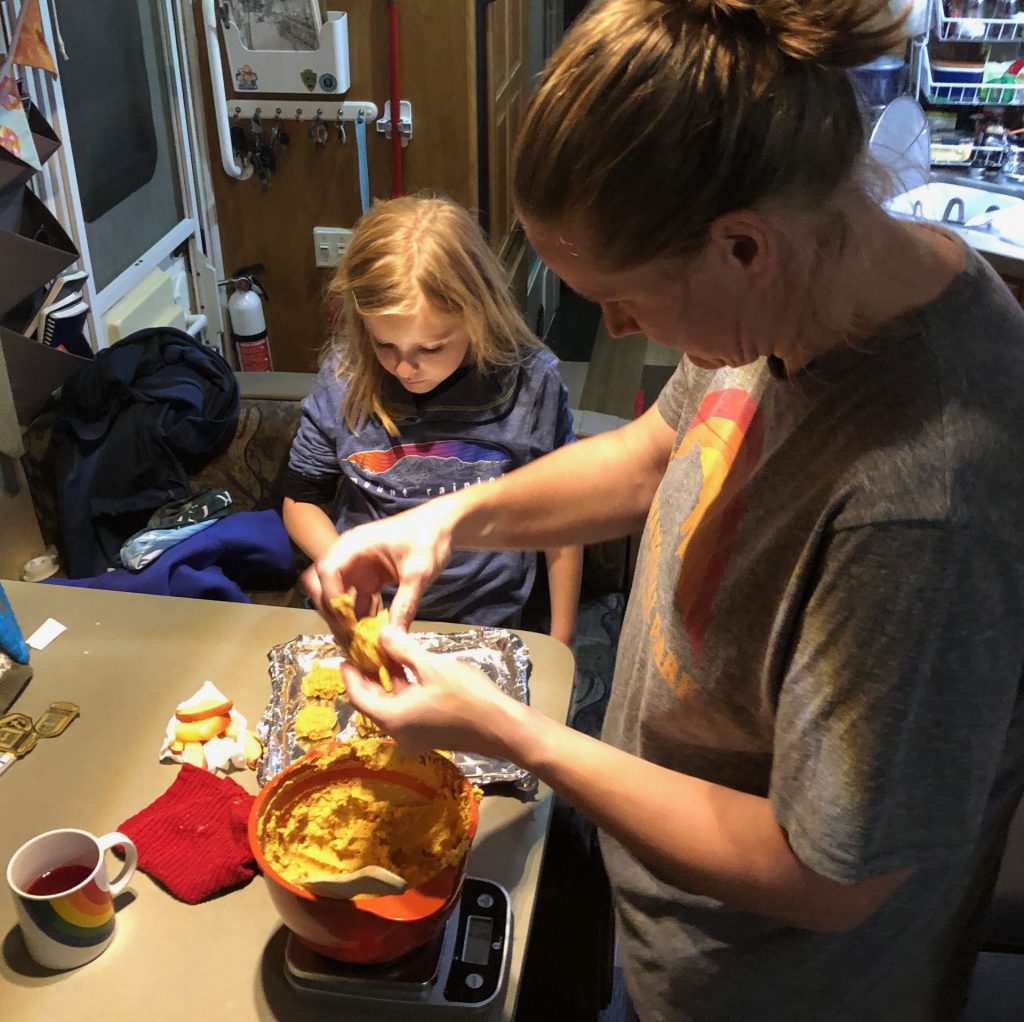 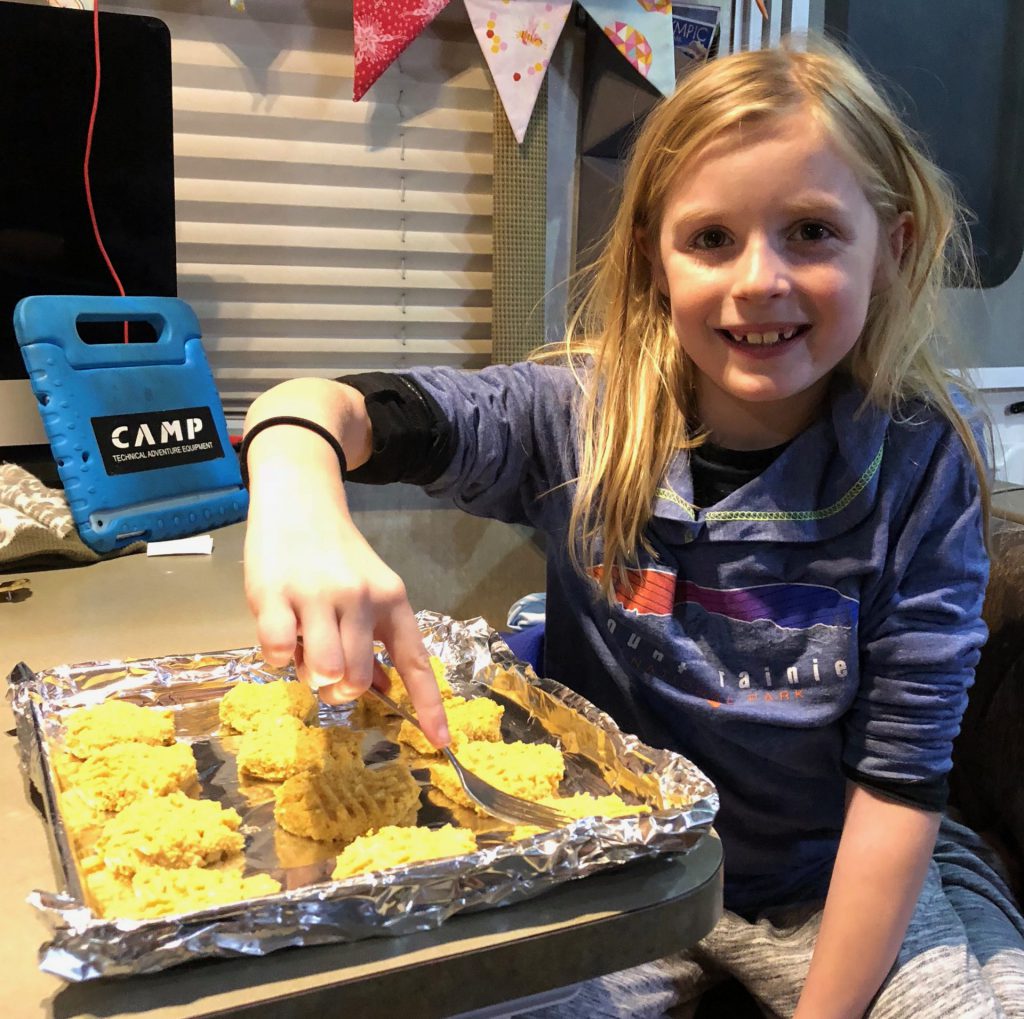 the cookies were tasty. but fell apart in crumbles at the slightest touch. i think we put too much pumpkin in them, but whatever. they all got eaten, gladly, but the residents of this camper. 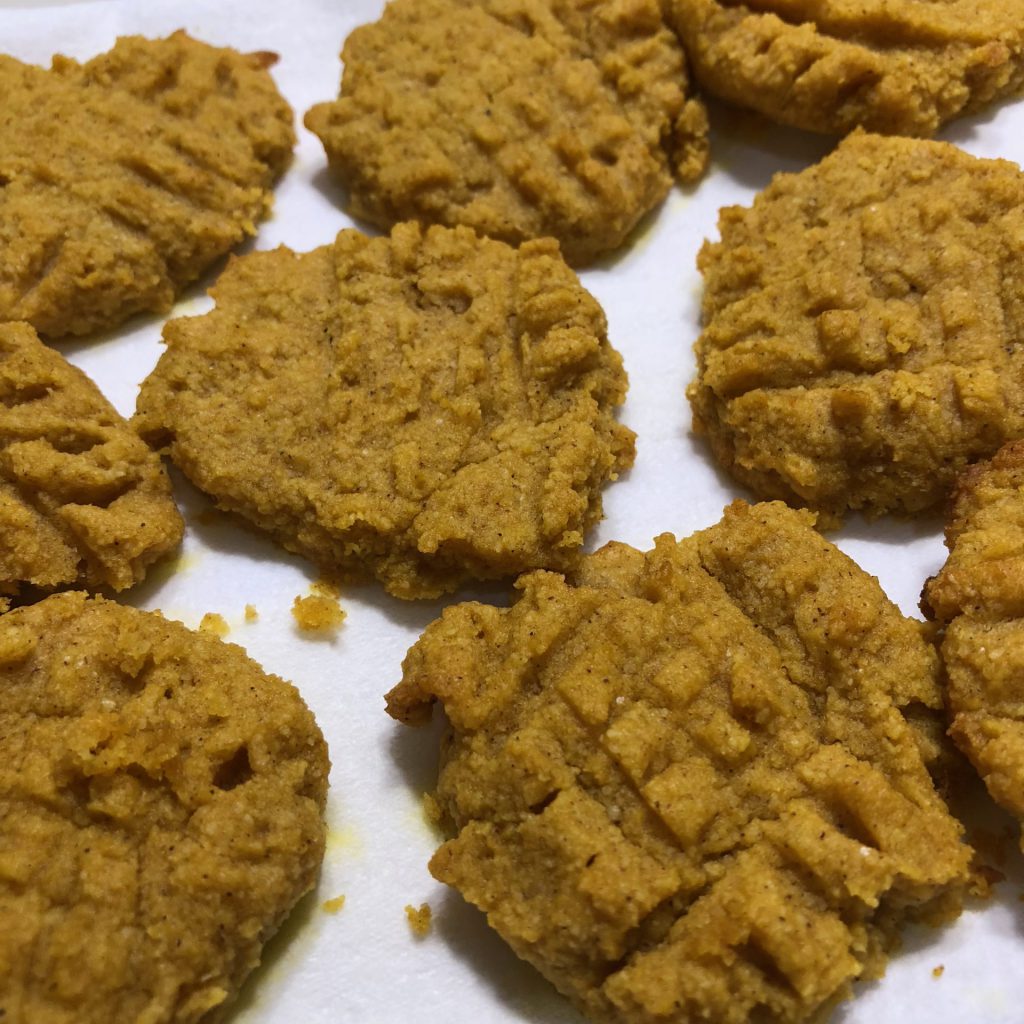 on our second day, even though the weather was looking not very promising, we drove up to the mount st. helens observatory, in the hopes that at some point, the clouds would part and we would get a glimpse of the remaining crumbles of the mountain. upon arrival, this was the scene. 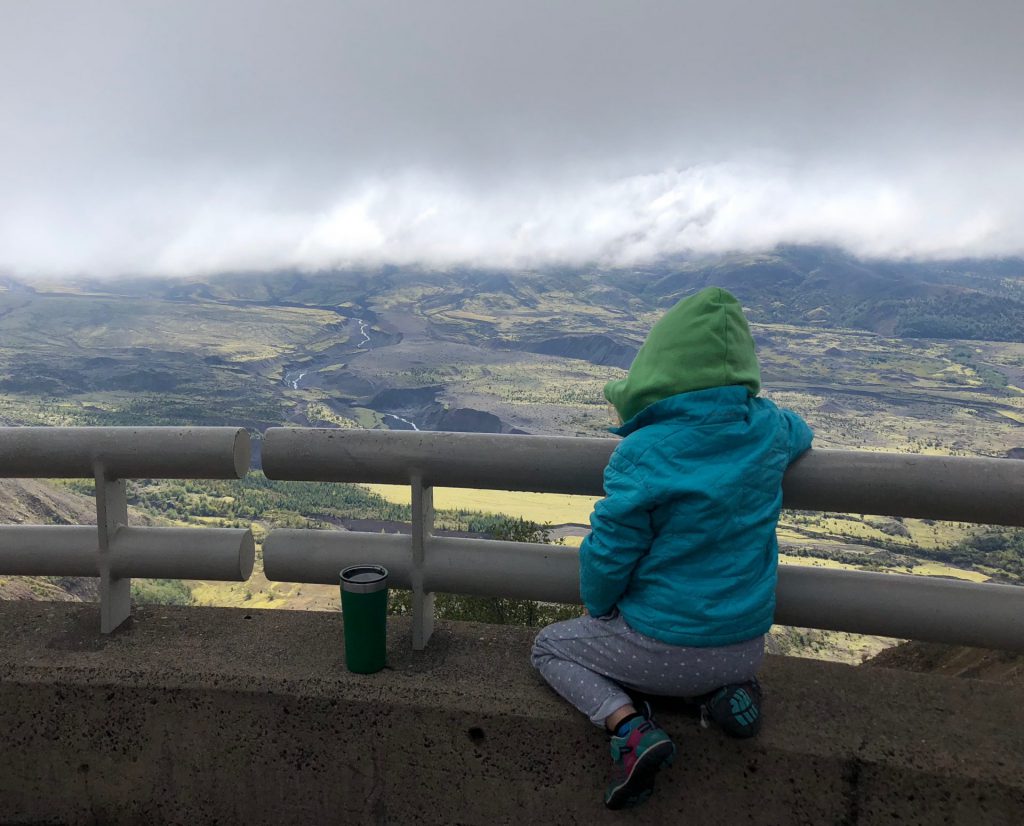 so, we went inside, picked up yet another (different and better) ranger book, and started checking out exhibits. hazel’s favorite was this magnet thing.

we were wandering around, we noticed the top of the mountain peeking out, so we ran outside to check it out. so exciting. 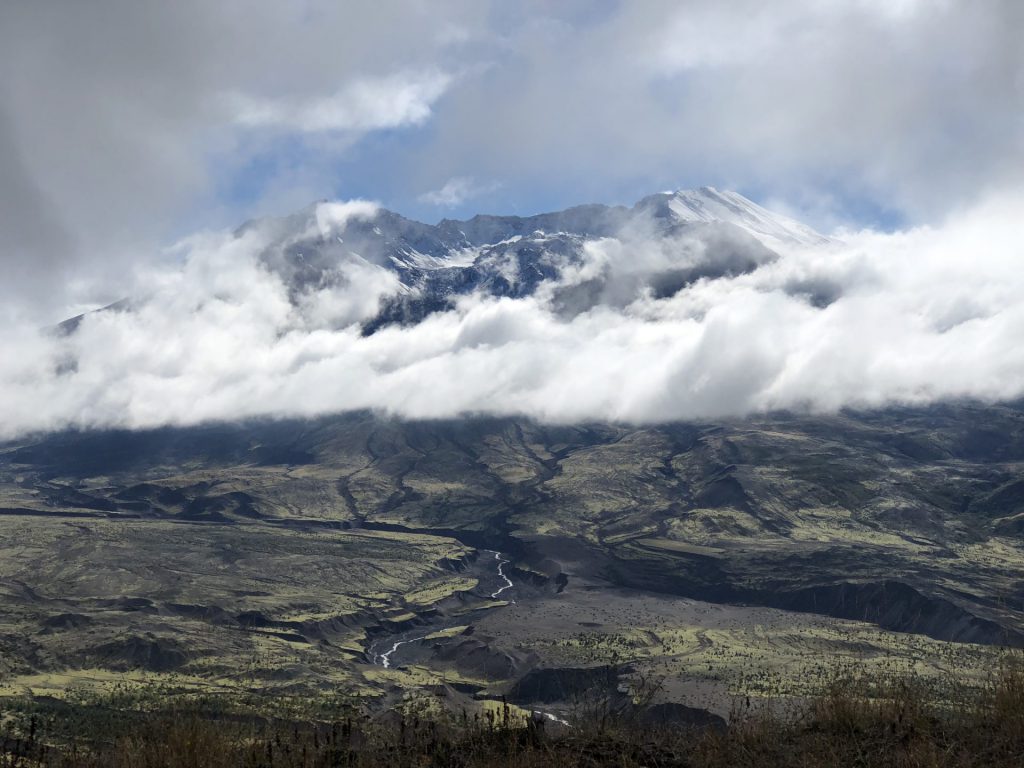 in a flash, it was covered back up, so we wandered back inside, to keep investigating the museum. 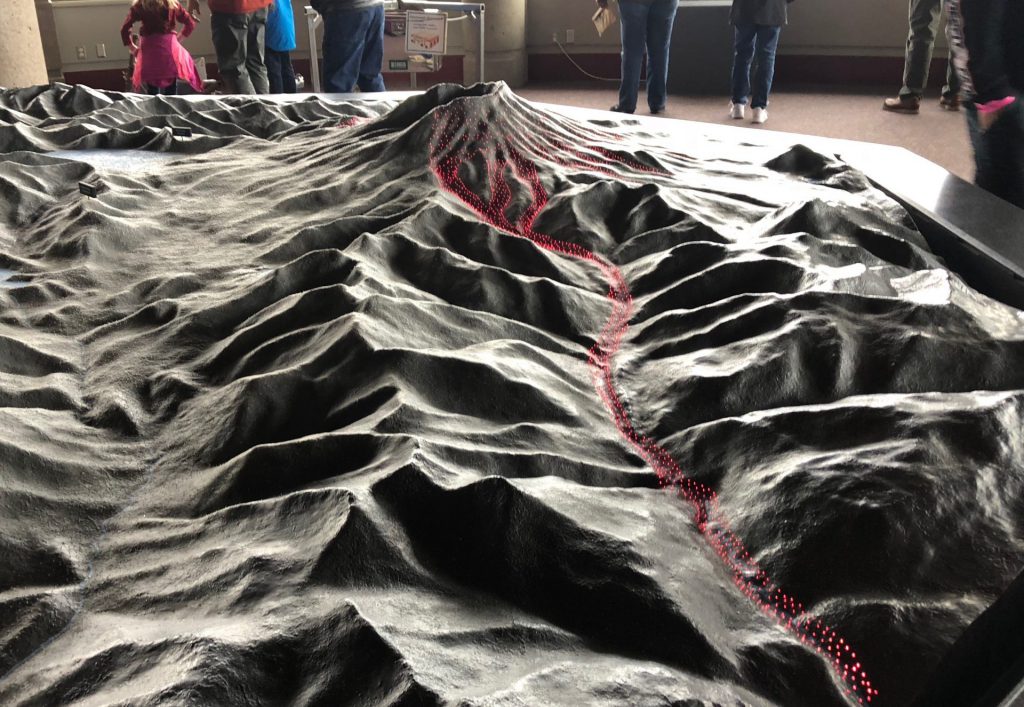 we watched both videos, one about the actual explosion and one about the growth in the area every since. they were both pretty great, but we especially liked the one about the explosion. it had a lot of cgi effects, mixed with actual footage, making it seem like we were actually there. we also attended a ranger program, where we learned that the water in the rivers got so hot, that fish were jumping out of it, in an attempt to escape. (spoiler alert: they died. but new fish eventually made it back to the area). anyways. this ranger book was much less stressful and the kiddos scored yet another badge and are now full fledged mount st. helens experts. 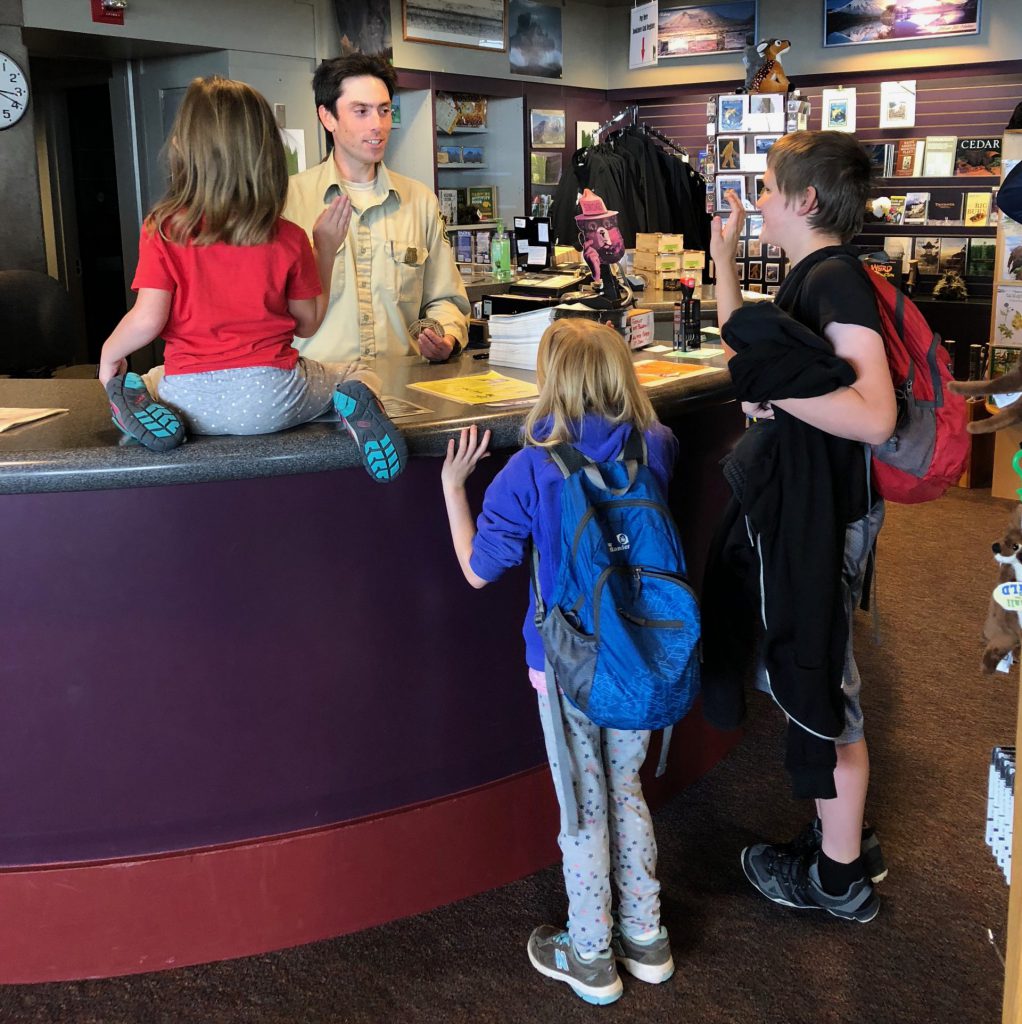 just as we finished the badges, hazel started jumping up and down and pointing outside, where the clouds were parting and the mountain was coming into view. we ran outside again, to check it out. 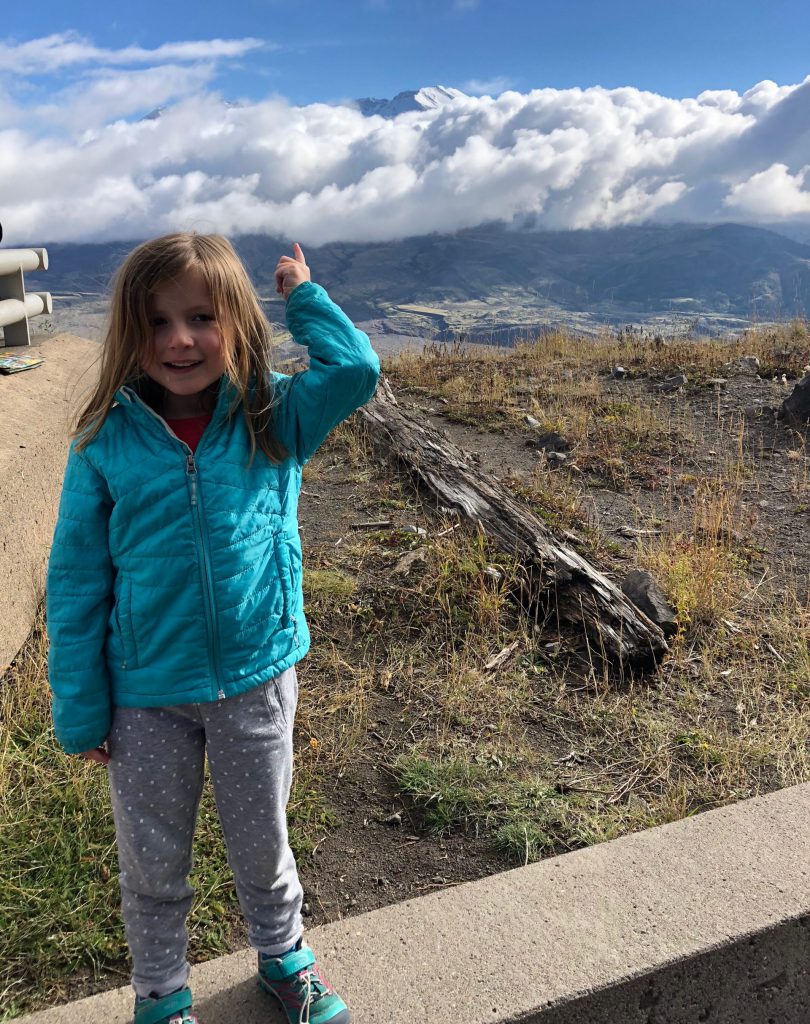 we decided to walk up to a higher overlook, to see if the views were any better. they were. 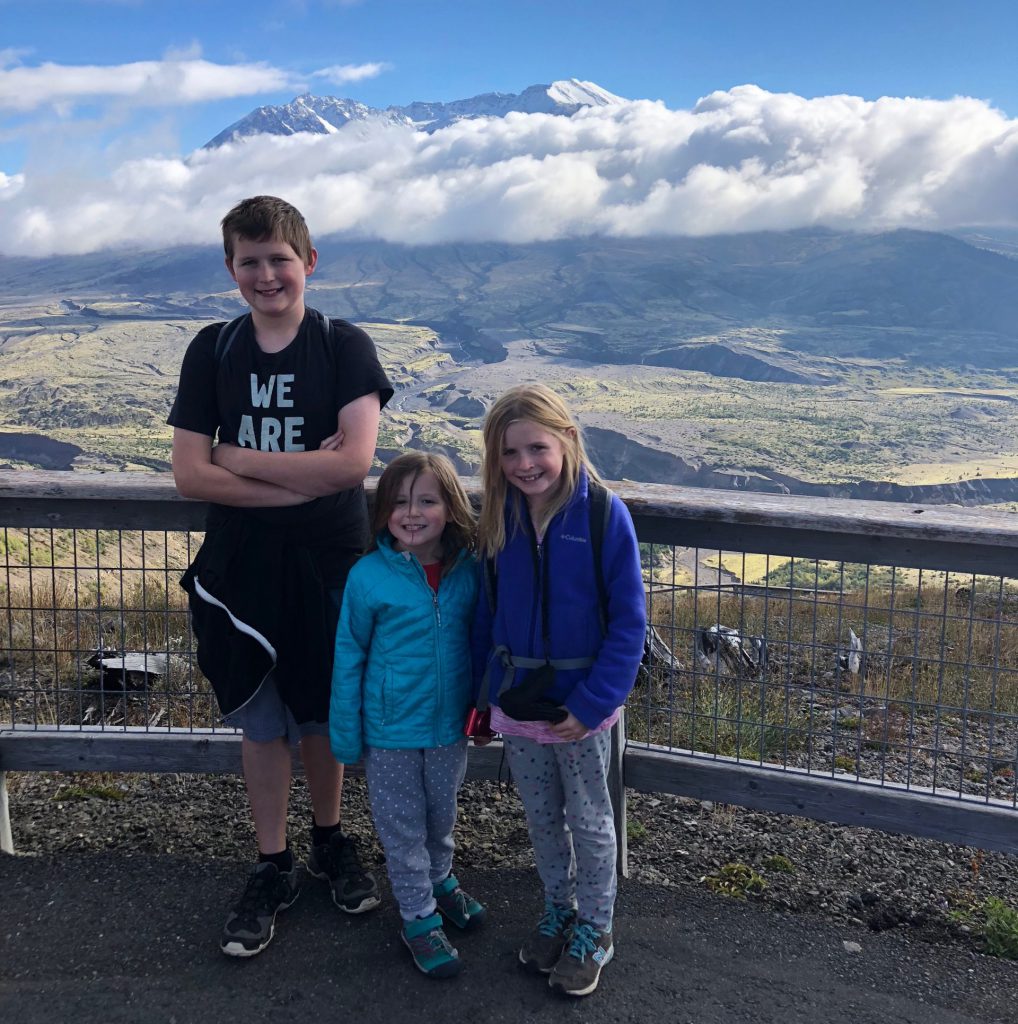 and then, we figured we had seen all there was to see on this day, and started to head back to the car. 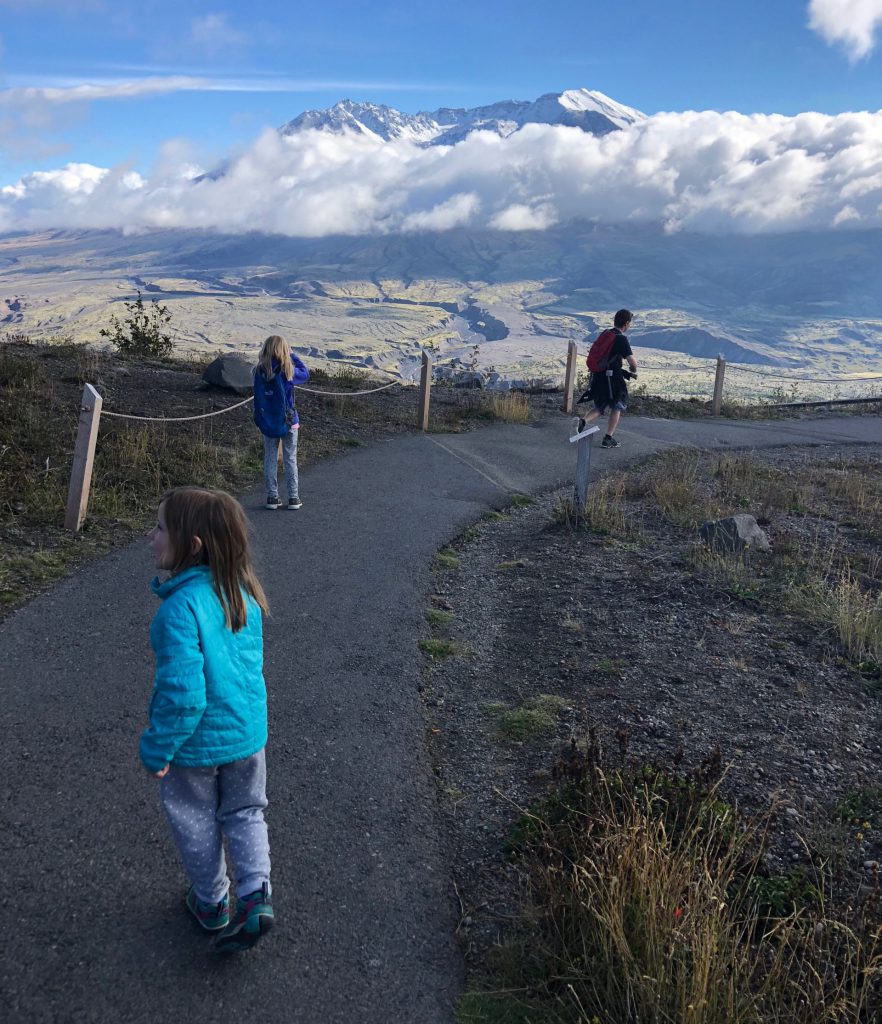 driving home, there was a great overlook that we didn’t notice in the white out on the way up, so we pulled over for what would be the best views of the day…

so. our mount st. helens time was a raving success. well. a success anyways. and sparked a new interest in volcanoes for theannababy, who has been reading up on them every since. back at camp, we packed it all up and prepared for a LONG travel day to our next destination (crater lake). even though the trip was long, we still had to kill some time so we didn’t beat derek to the campground, so we made plans to meet up with my cousin in vancouver again.

she took us out to a hole in the wall diner with her fam. the place was pretty fantastic, even if i had to steer clear of all the delicious looking carbohydrates. 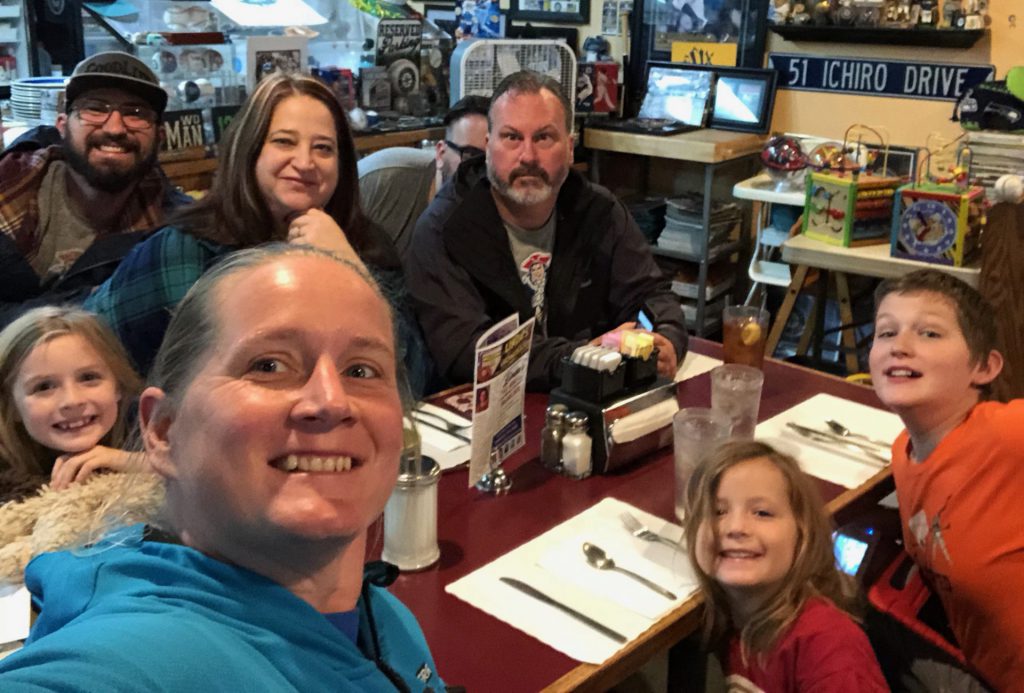 how do you know it was a hole in the wall? this floppy guy outside and an upside down sign, of course. 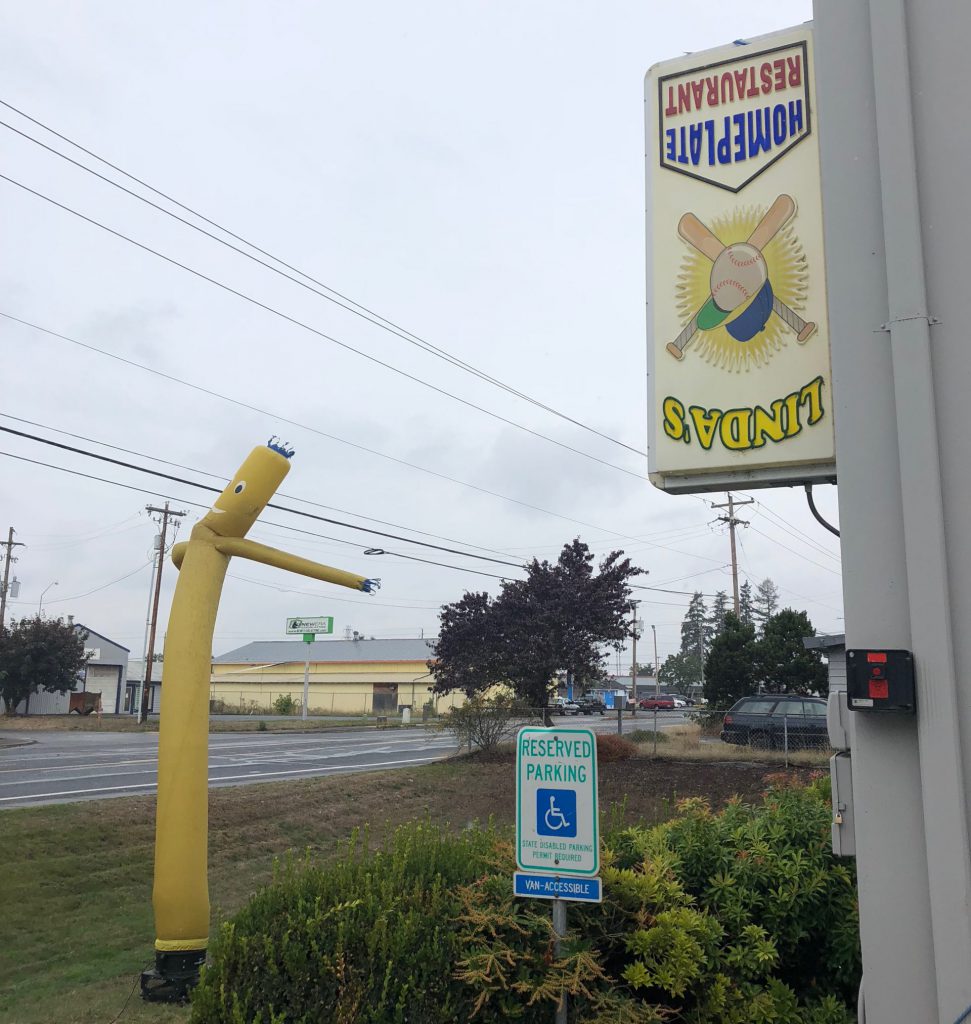 we went back to her house for a bit. watched the bills game. made a quick run to costco. and then hopped back in the car to finish the LOOOONG drive.

as i was driving, i remembered from on our way up, that in springfield, there’s a simpsons mural, so i knew we had to make an ever so slight detour to take a look. my kids aren’t really simpsons fans, but i grew up on the show, so they obliged me and took a pic. the mural is a nod by matt groening, acknowledging that springfield oregon is the “real springfield” that the cartoon calls home. 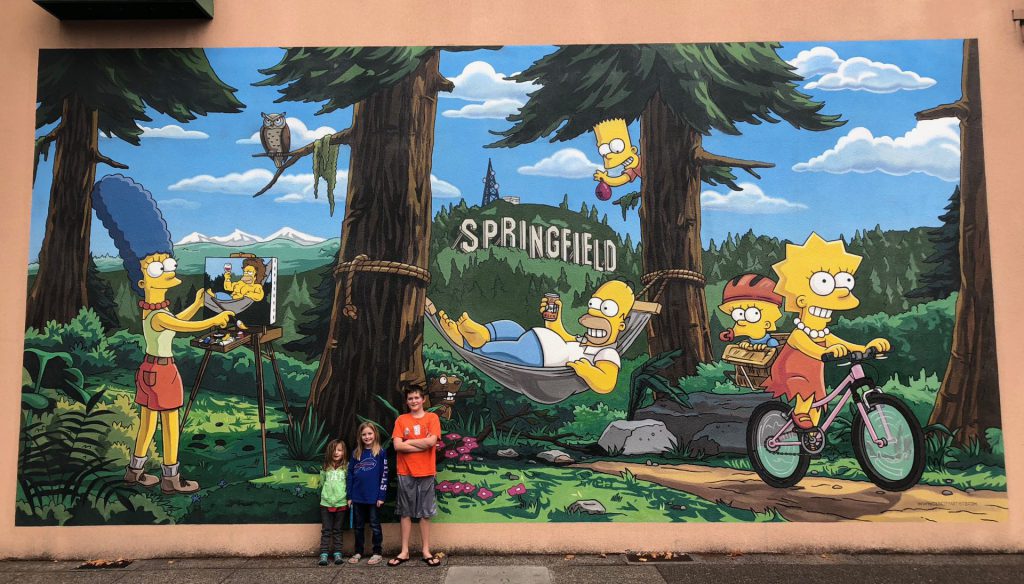 soooooooo. finally, we got back on the road. and like 3 hours later found ourselves at crater lake….
stay tuned for details.