so, the boy awakened early from his nap today and started whining. i wanted him to go back to sleep, so i waited a little bit to see if he would, before i finally went in to get him.

upon opening the door, this is the scene i was witness to: 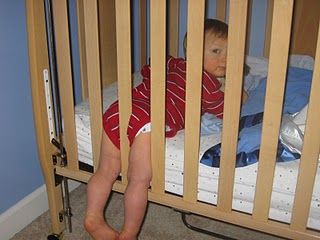 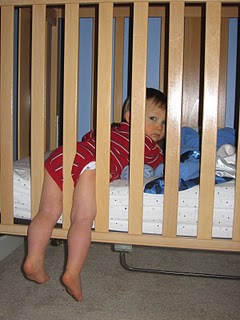 he’s been sticking his legs and arms out the gaps between the slats quite often lately. i didn’t know if he’d get stuck or not, because he seemed pretty in control of the situations that i’ve observed. this, however, was a different case. he was stuck. he wasn’t really mad about it. just mildly annoyed. he even let me run and get the camera and snap these pictures.

i just hope that it’s not a pattern that he’s going to take part in… legs stuck, short naps… crabby boy.