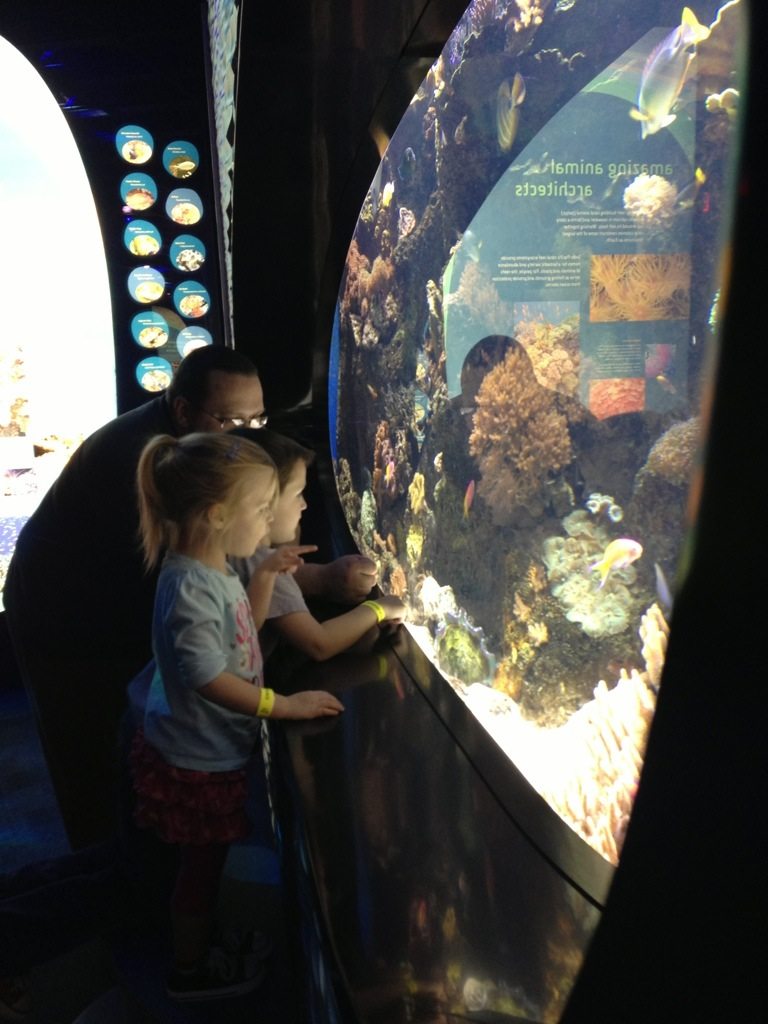 with no pressing engagements or cakes or other such things to suck up our time this weekend, we decided to head south the the queen city of charlotte north carolina to check out the discovery place museum and possibly ikea. we’ve never been with our own kids, but i went with jake about 7 or 8 years ago…

they jumped right in. anna building with me. 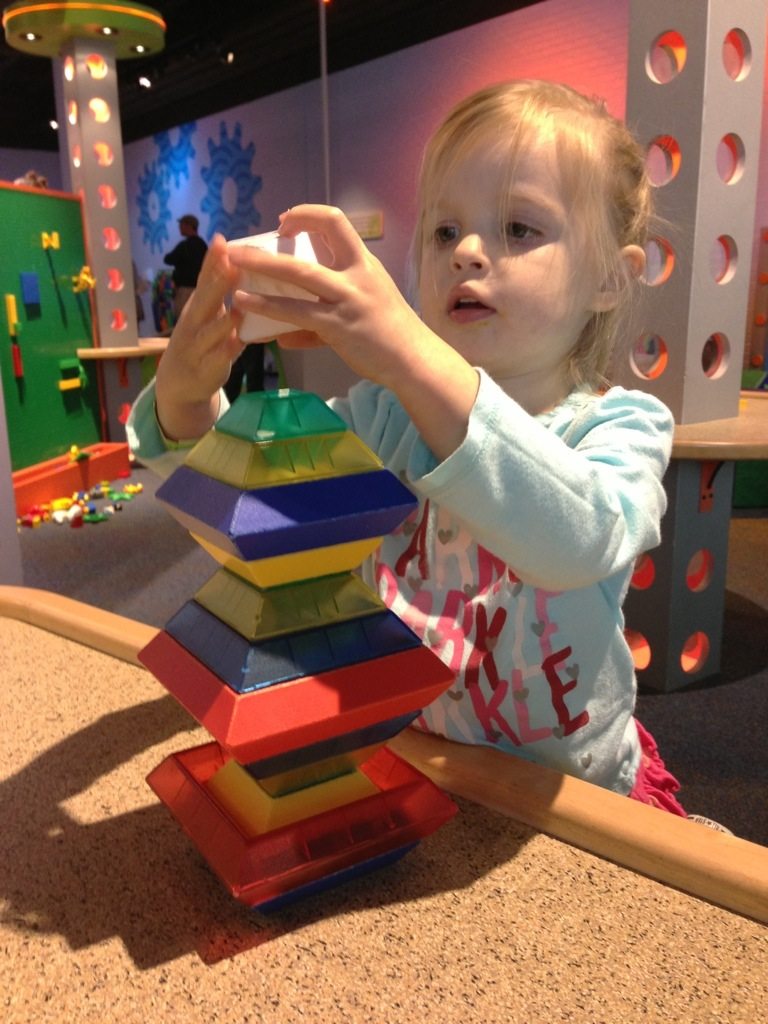 and ike with his dad. 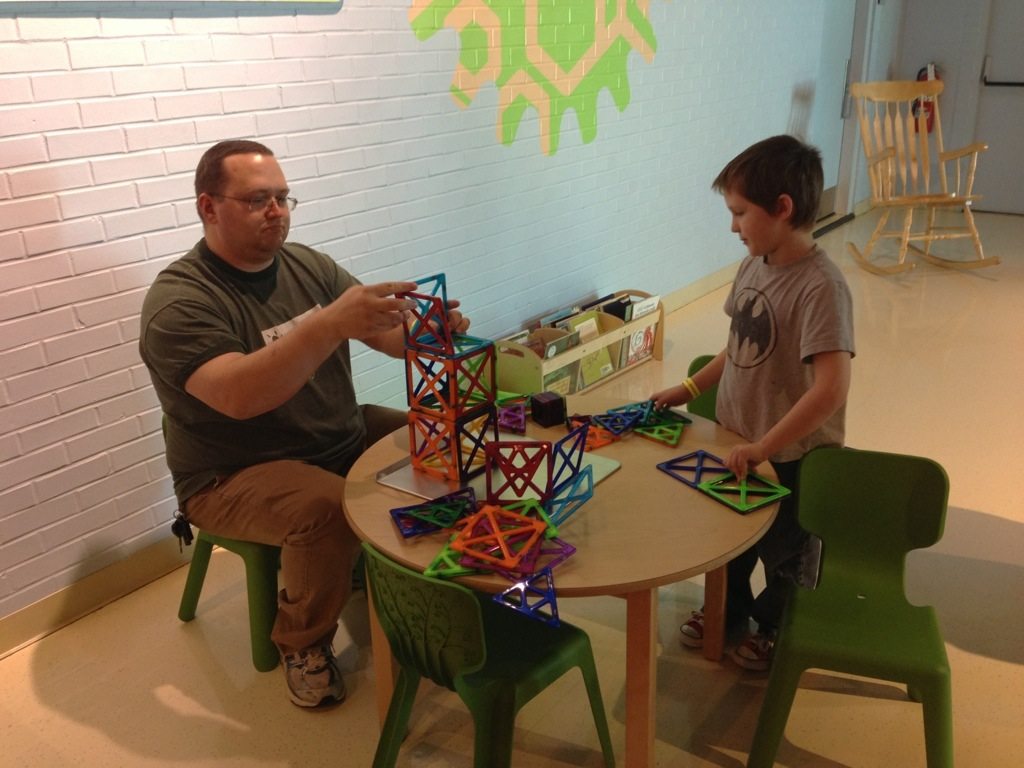 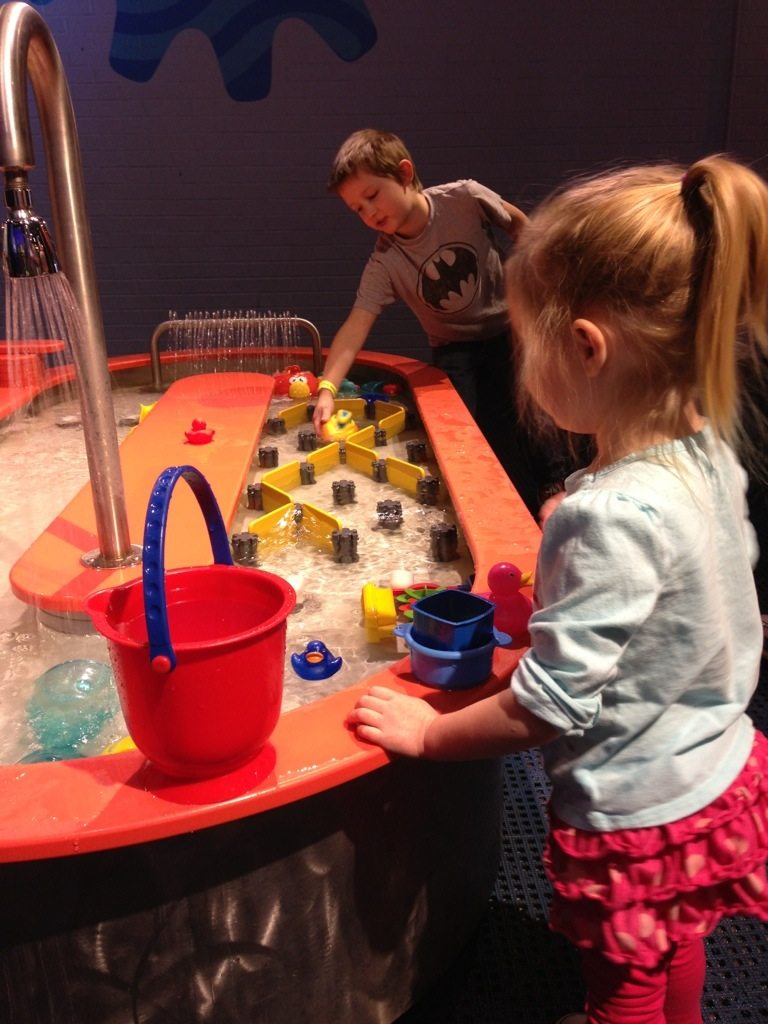 so many possibilities for getting wet before we even really got our day started. 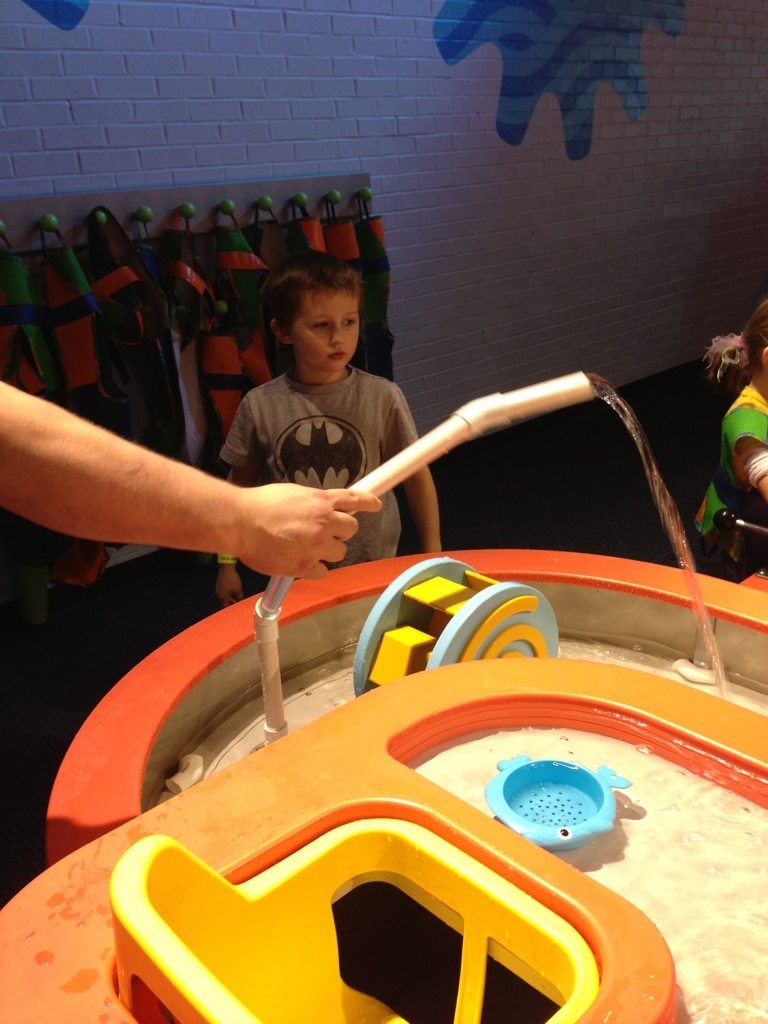 anna and i wandered off into the rainforest area while derek and isaac looked in microscopes and magnified their hands until they could really and fully understand how dirty and grubby they are. 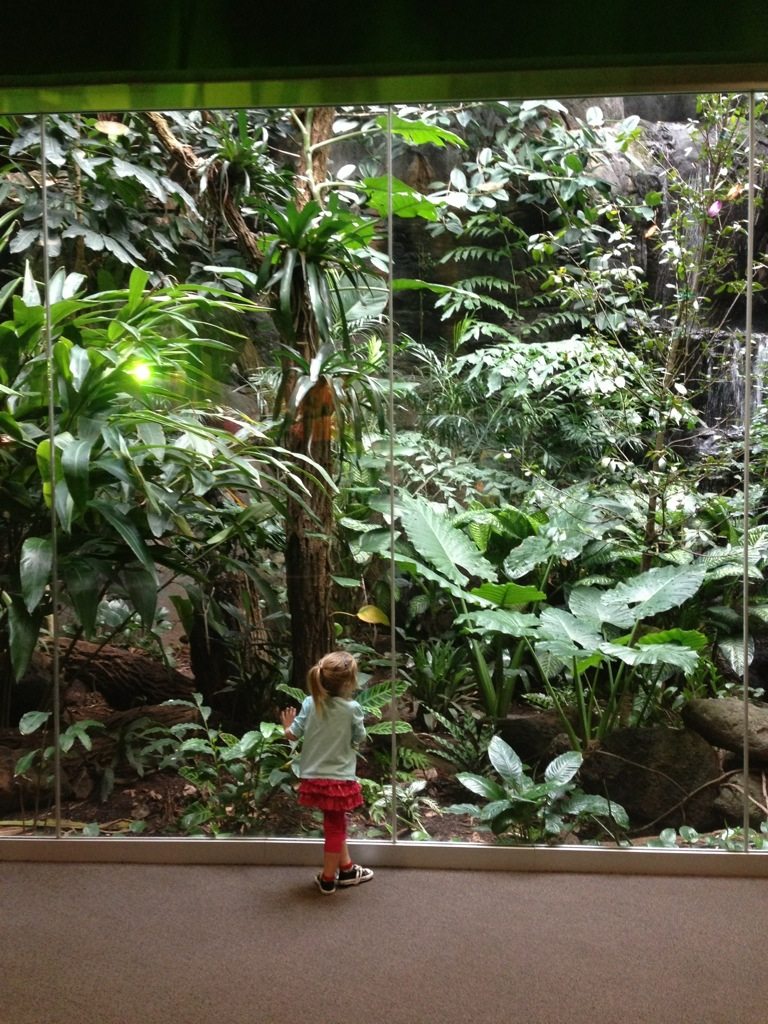 lots of pretty fish to look at…

the jellyfish were supercool. and in a black light. so this is the best pic my phone could get. 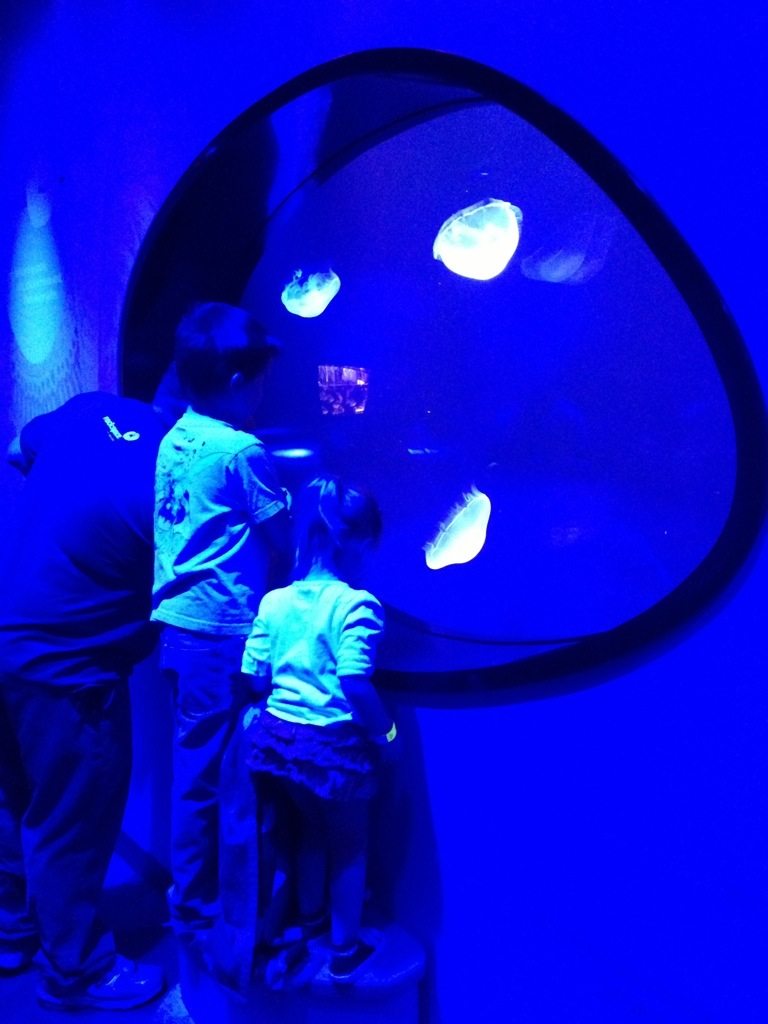 disclaimer: after this, my pictures were shoddy. the kids were on the move a lot. and the lighting was dungeon-like. 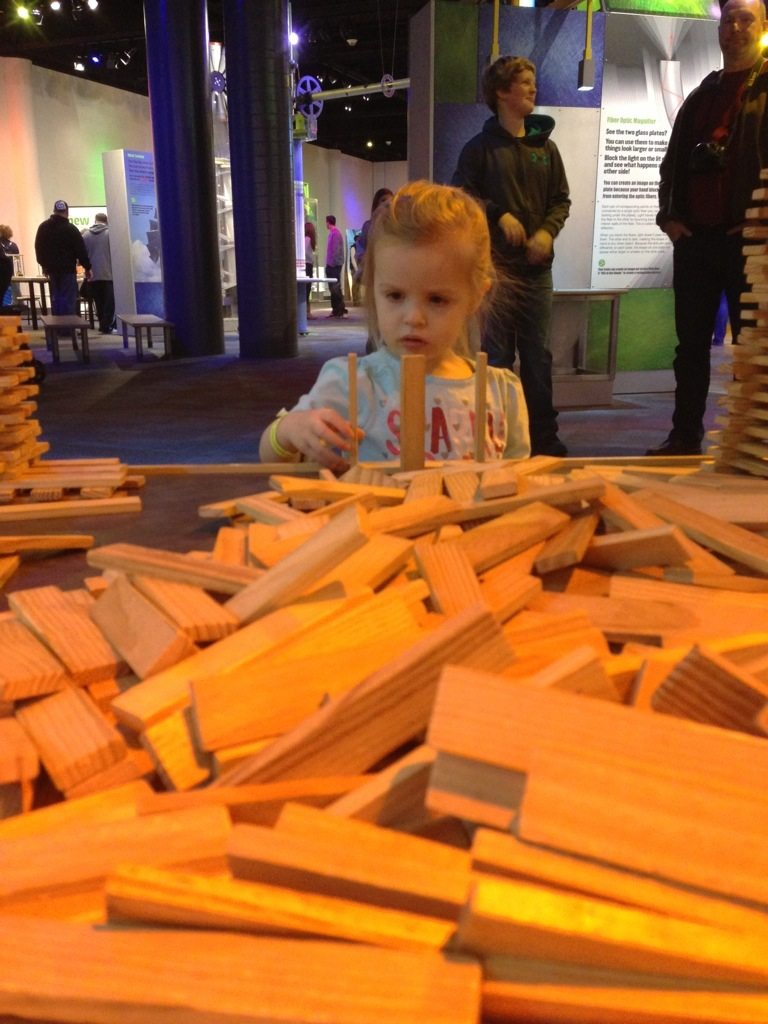 giant tall tower (that was half constructed when we arrived). 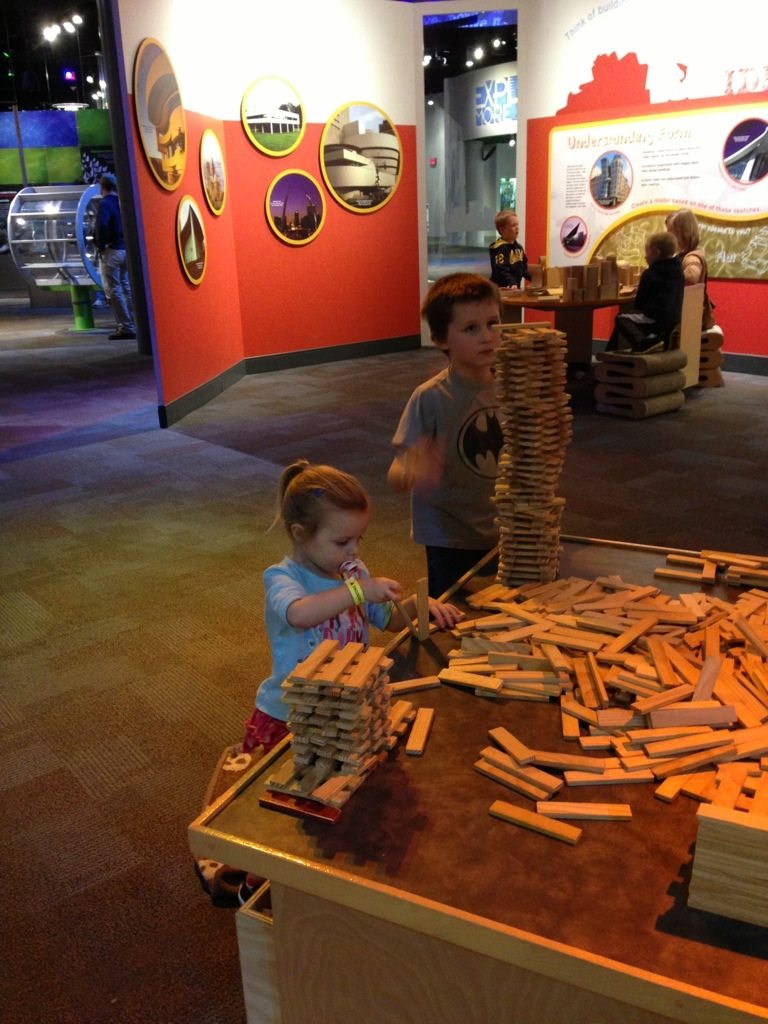 isaac pulled himself up using the “hard” and “harder” pulley system. “hardest” was just a little too much for him. he’s a pretty strong fellow. 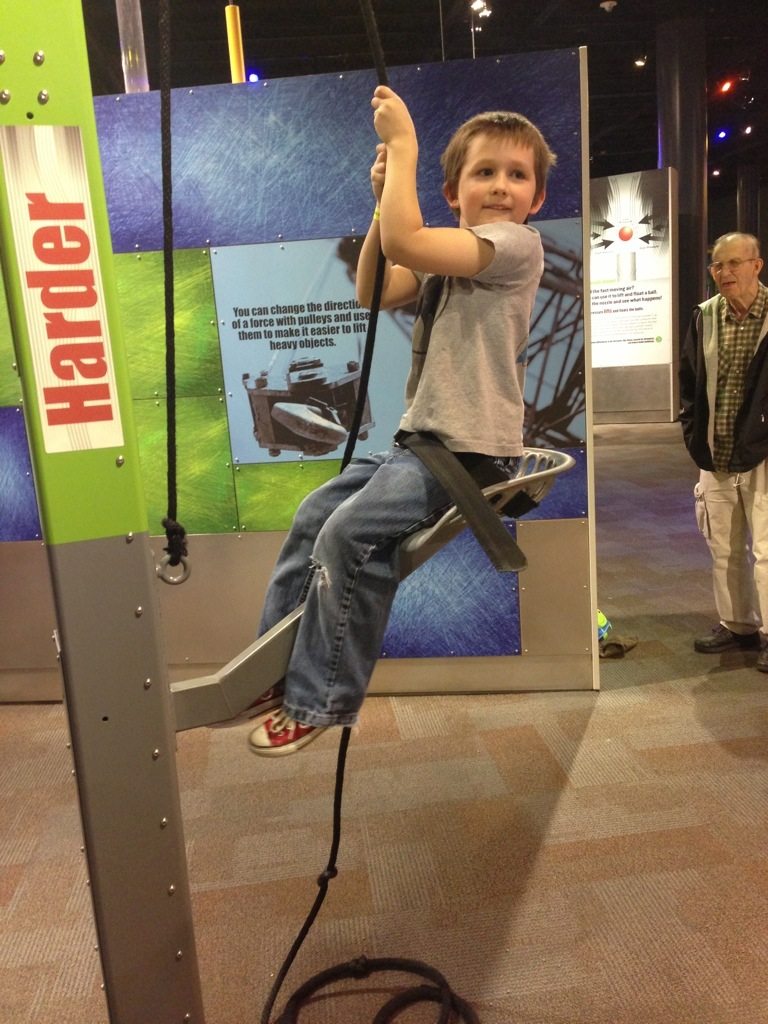 upstairs, back in the rain forest, there was a little rope bridge that the kids could traverse, and channel their inner indiana jones. except for the part where they don’t know who that is. 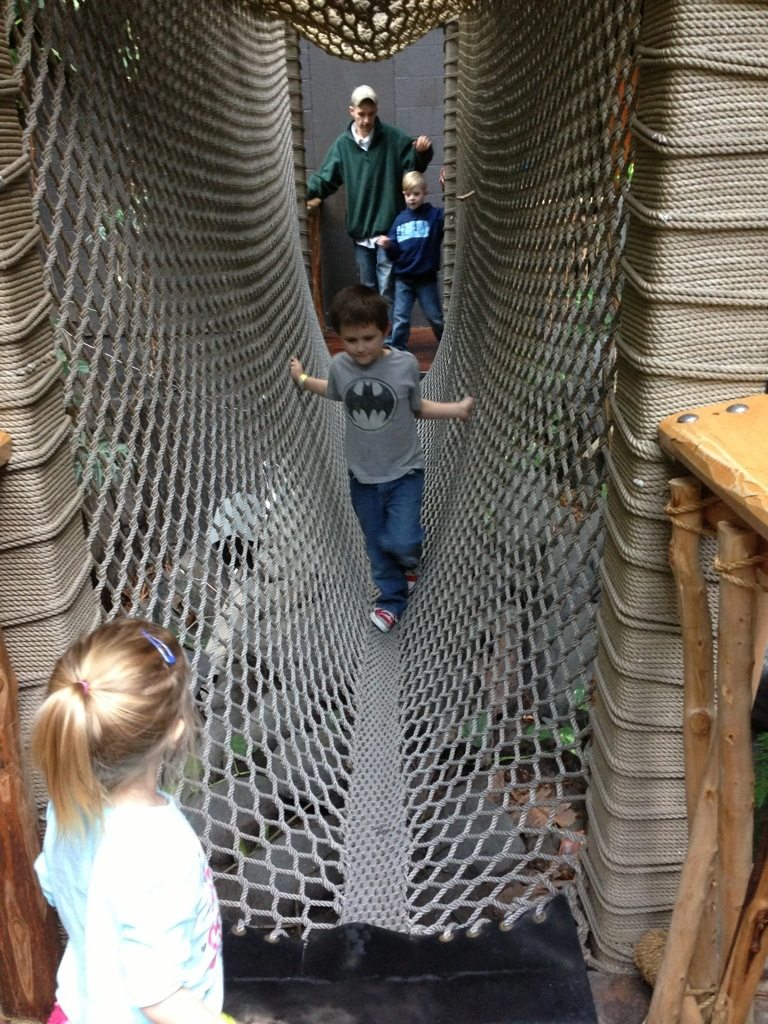 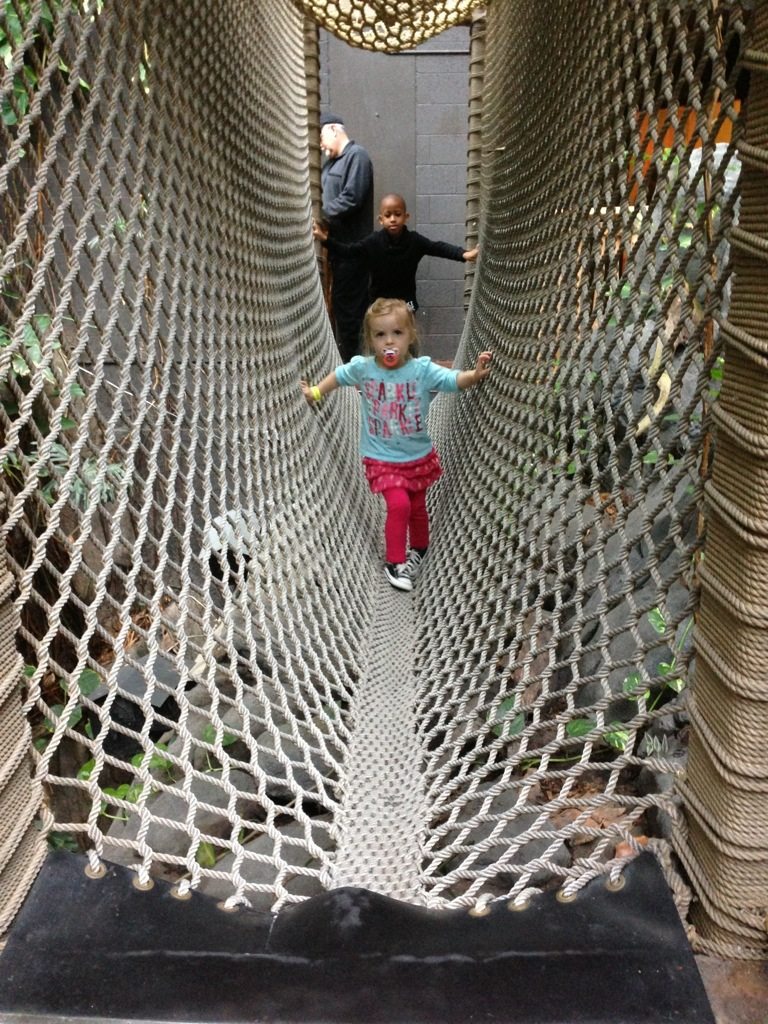 more fun with pulleys and other various scientific properties. 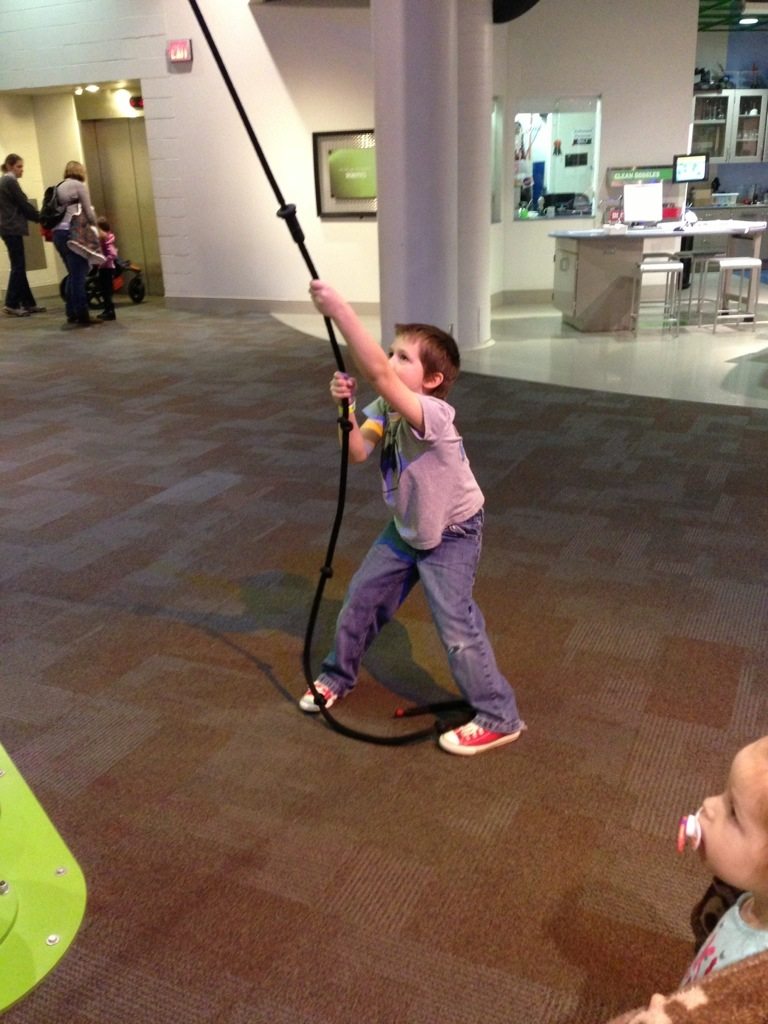 the museum was not quite as cool as i remember it. i even went back to look at pictures of when we went with jake and verified that it was not as cool. oh well. we did get to watch the little prince in 3d imax which both kids seem to think was pretty cool.

after the museum, we decided we might, in fact, be up for a trip to nearby ikea. we were just going to get ideas for ike’s bedroom. (he still sleeps on an old queen mattress on the floor, which is actually pretty cool, but i was thinking he was ready for an actual bed).

we did get ideas. such great ideas that we decided to buy the bed on the spot. and a bunch of other stuff. and a one dollar cinnamon roll. 🙂

the kids were champs. i was pleasantly surprised. here they are, guarding our merch (and eating an ice cream cone), while derek perused the various swedish grocery items. they both fell asleep pretty much before we left the parking lot. 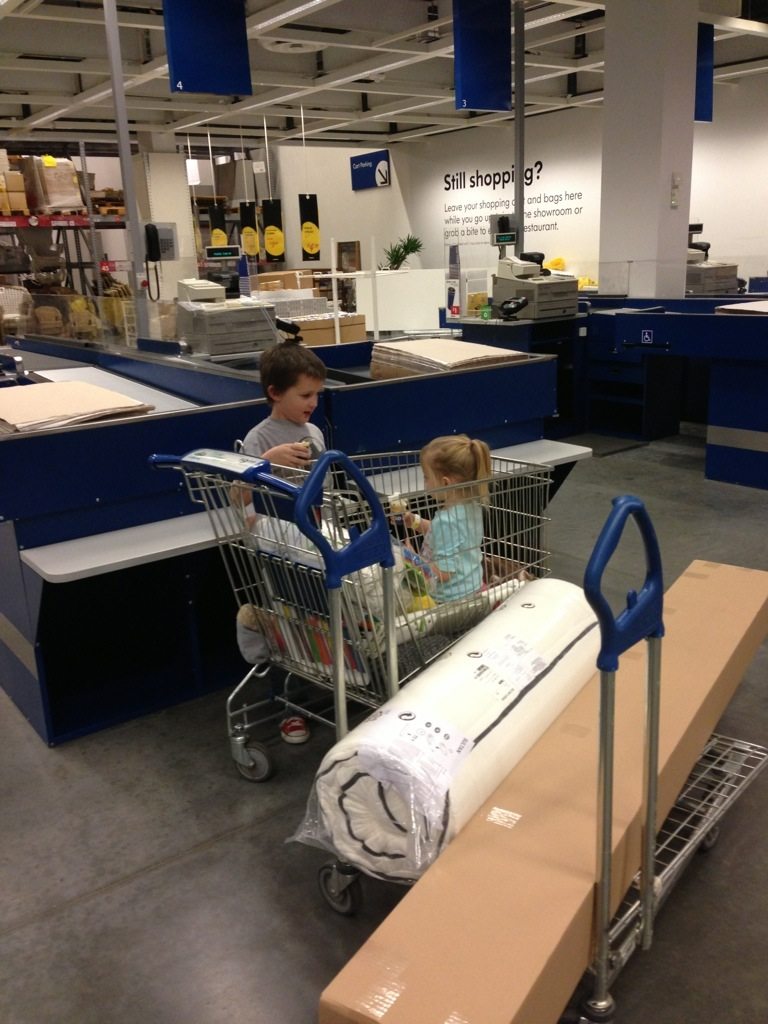 i scored two precut 3 yard pieces of this fun kids fabric for $4 each. 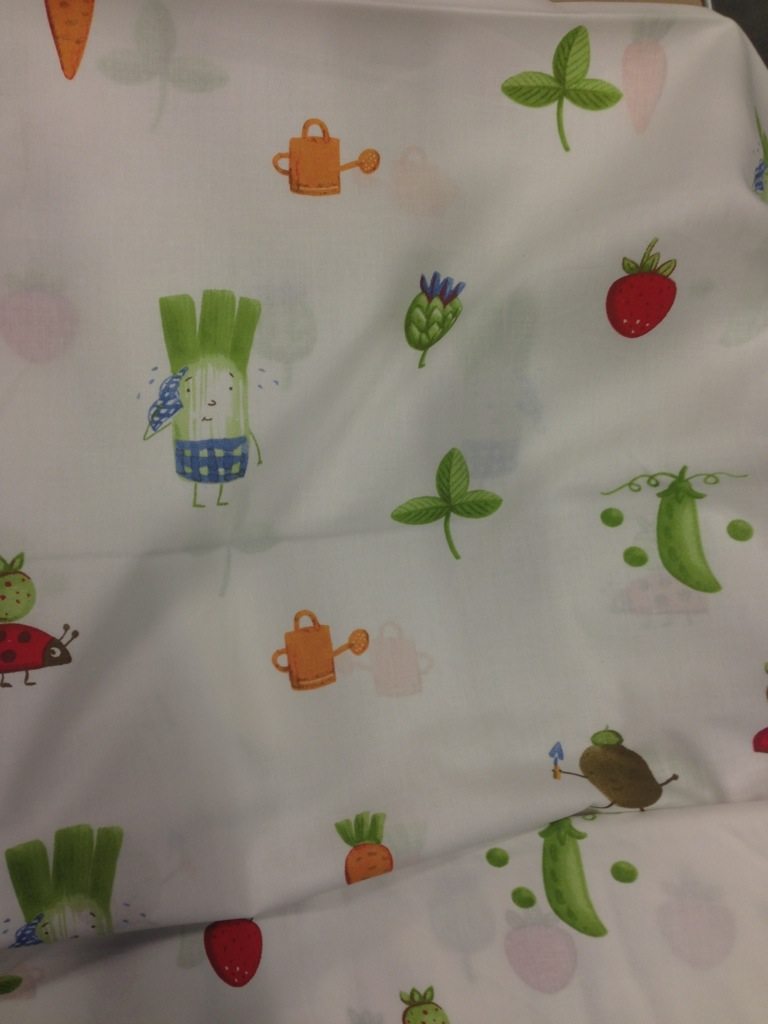 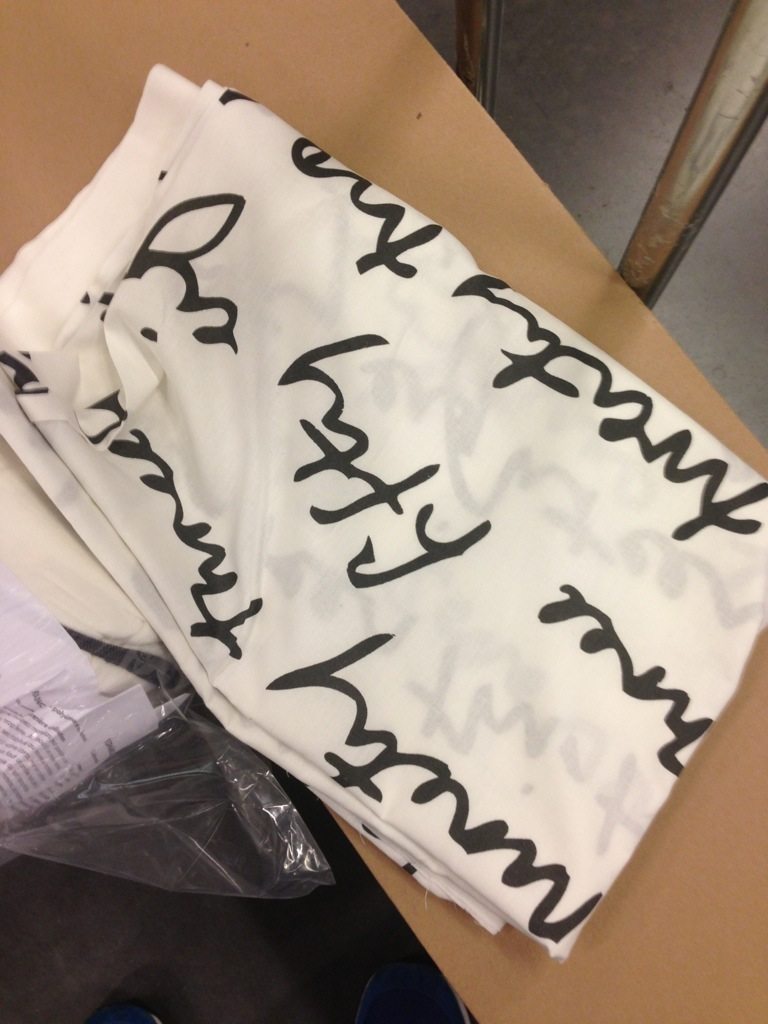 so, then, yesterday, derek assembled isaac’s new bed. lucy is not a fan. she liked the previous set up. 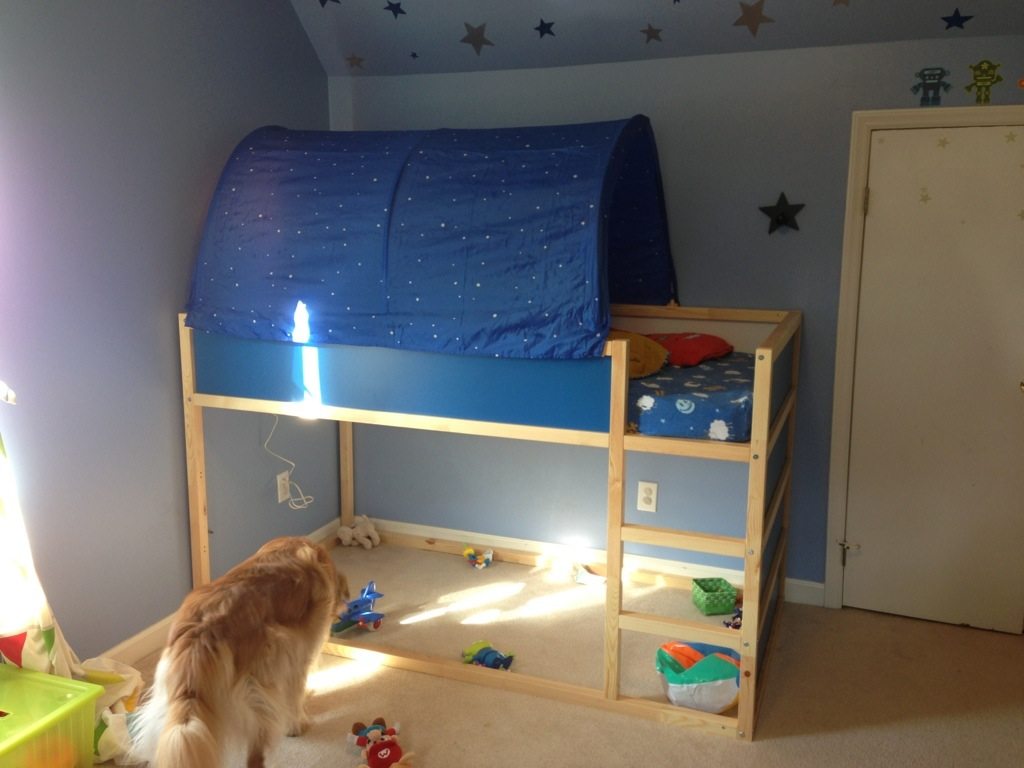 of course, we bought the moon lamp to go with it. isaac has been reading up a storm. and anna will gladly be the recipient of all this moonlit reading. 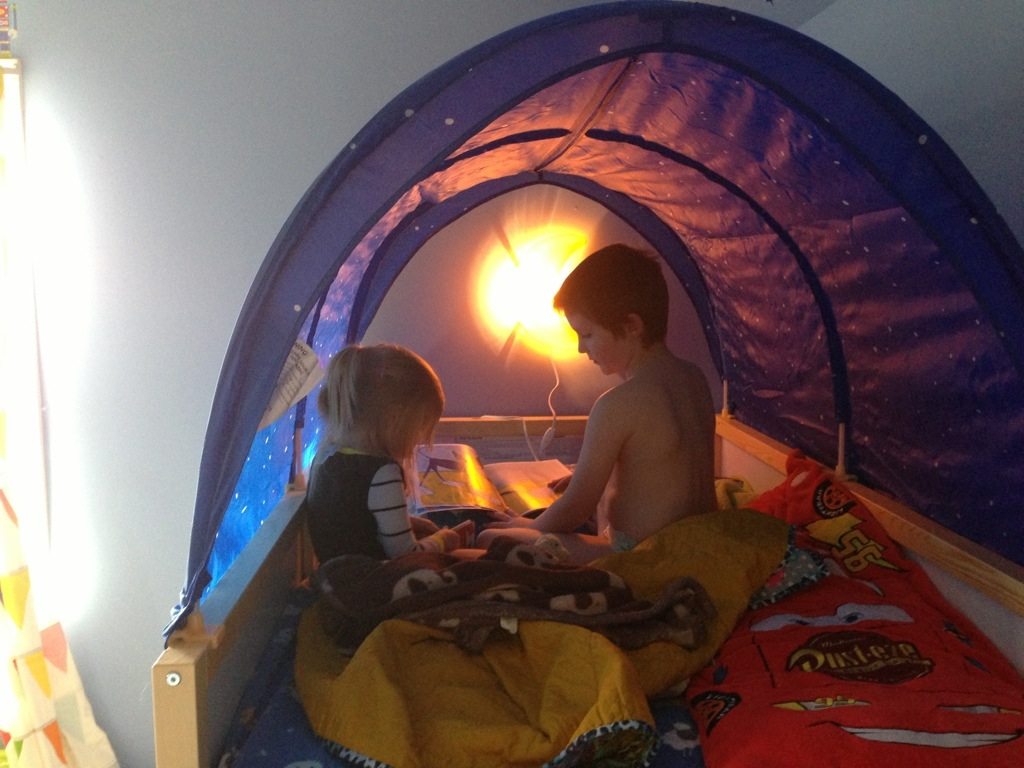 anyhooooo…
that was our fabulous charlotte saturday. and follow up sunday. the end.