for the last couple of weeks, we have been learning about bees for science. we’ve read books, watched videos, watched the bee movie, wrote a bee book, made a bee craft and finished off the study with a trip to our favorite local beekeeper, mark duncan. (he’s a friend of ours from church and he and his wife have two girls almost exactly the same age as our two girls. so, a fieldtrip-playdate-lunchdate-funday was planned.)

the bee craft doubled as the bee book cover. 🙂 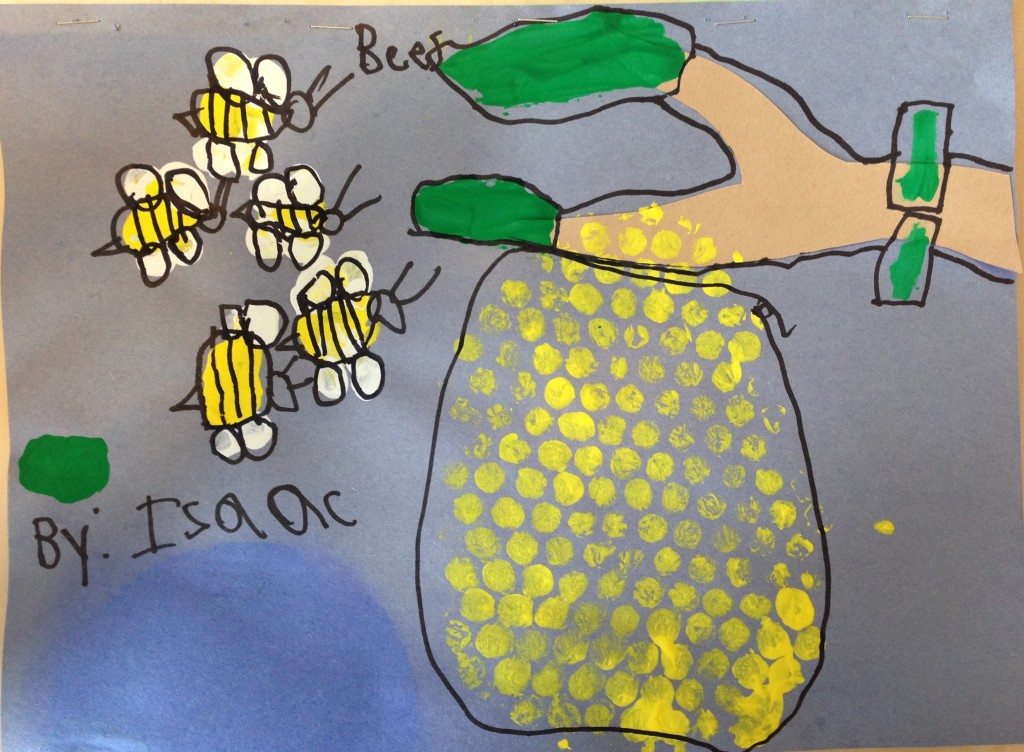 we tracked down a child size bee suit via some other friends who keep bees and/or know other folks who keep bees. it was a perfect fit. 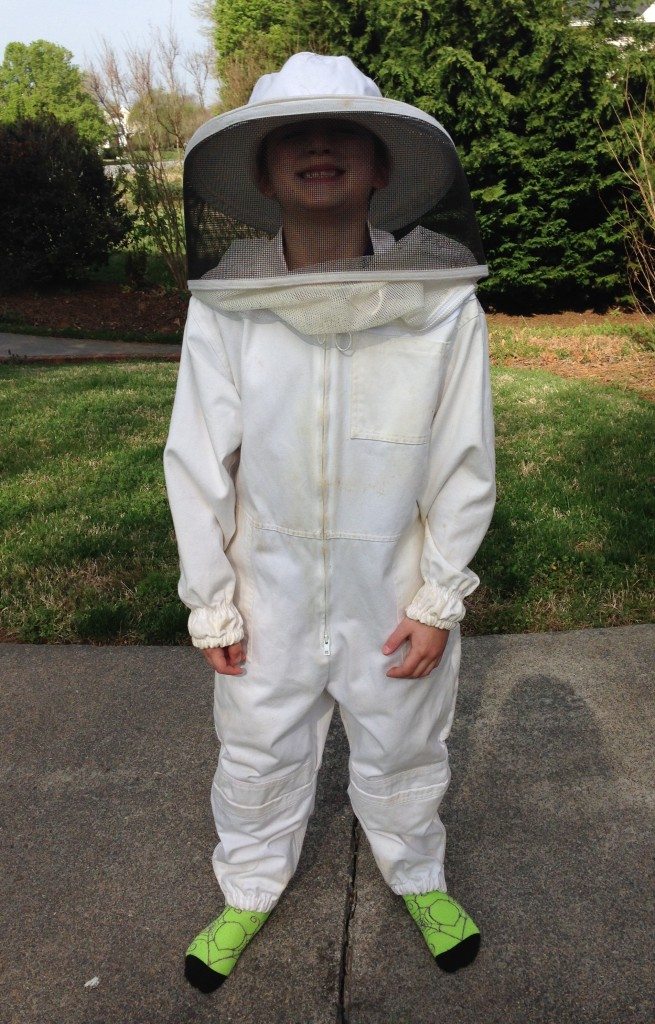 isaac wore it all morning and in the car on the way. while i was about 97% sure he was going to completely freak out when it came time to actually see the bees, his excitement to wear the suit gave me hope. 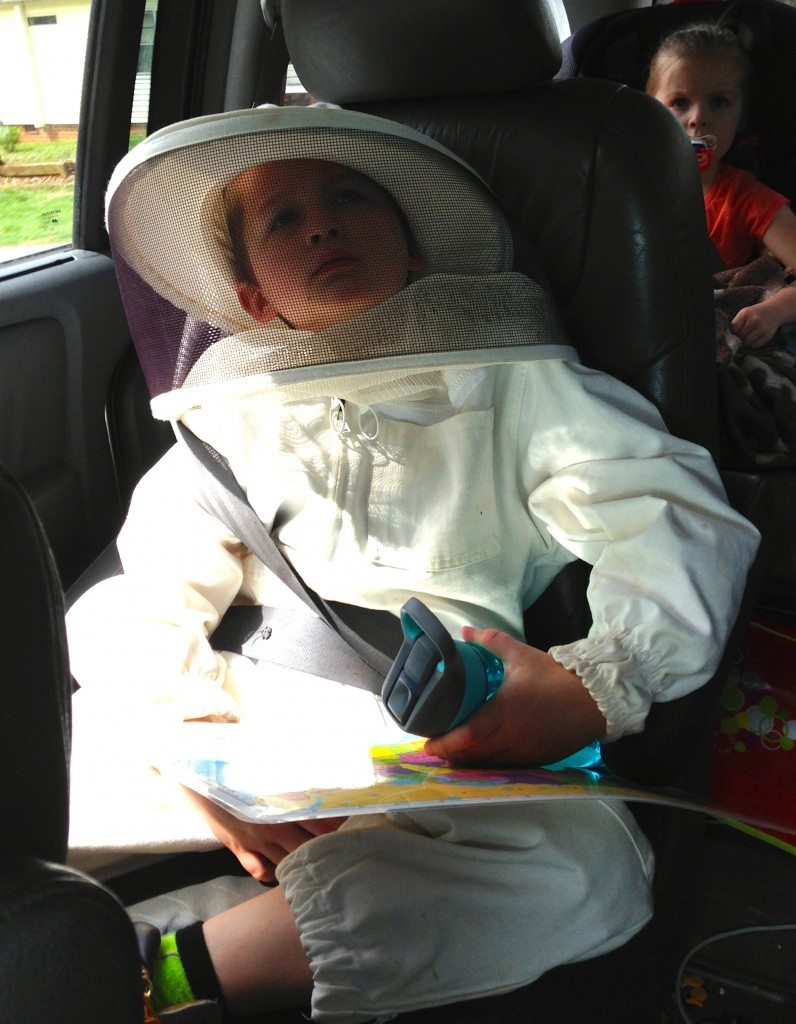 after lunch (sans suit), mark showed isaac some cool stuff about bees. i think isaac was mostly concerned with making sure anna saw a princess placemat that was on the table, but he did retain a bit of knowledge about how long queen bees take to grow. 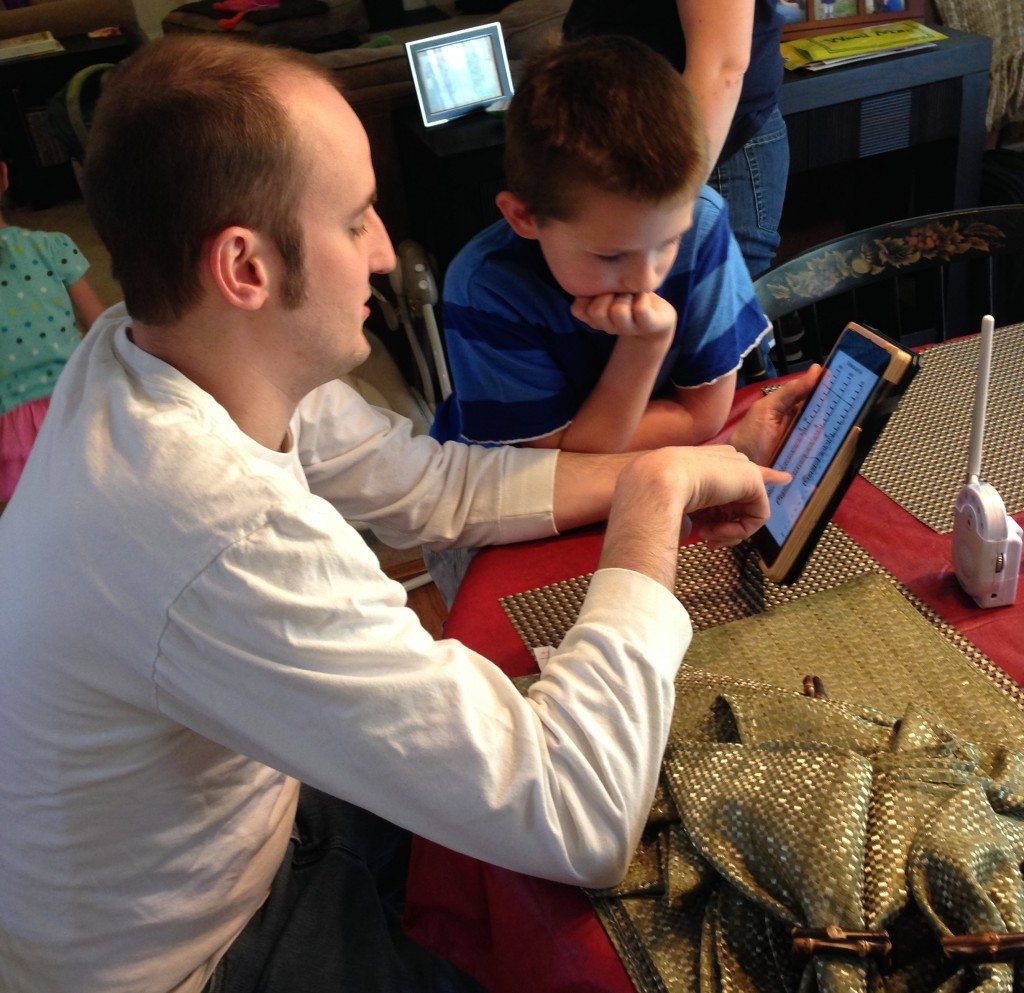 then, after a slight mini meltdown, we suited up. mark duct taped any and all possible openings on isaac’s suit, so he would feel completely secure. he explained all the tools and answered all questions. 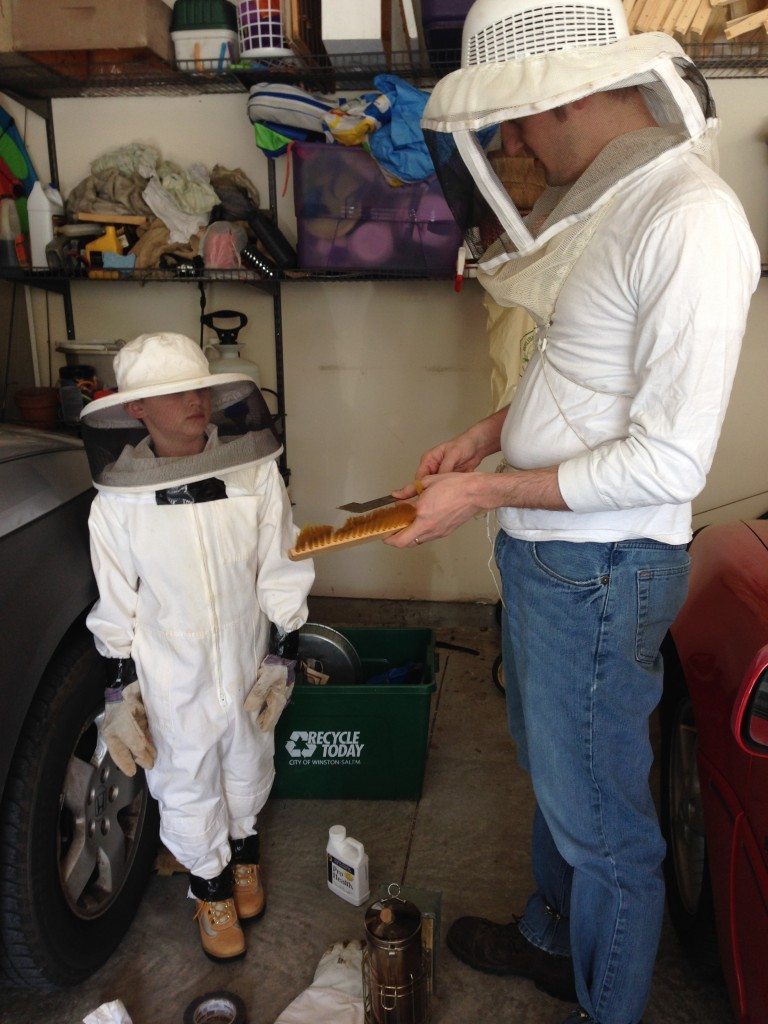 we headed up the hill to the hives. there were three. one empty, one new one that was waiting for a queen to hatch. and one old established one. mark explained everything that would happen, and isaac was surprisingly on board. 🙂 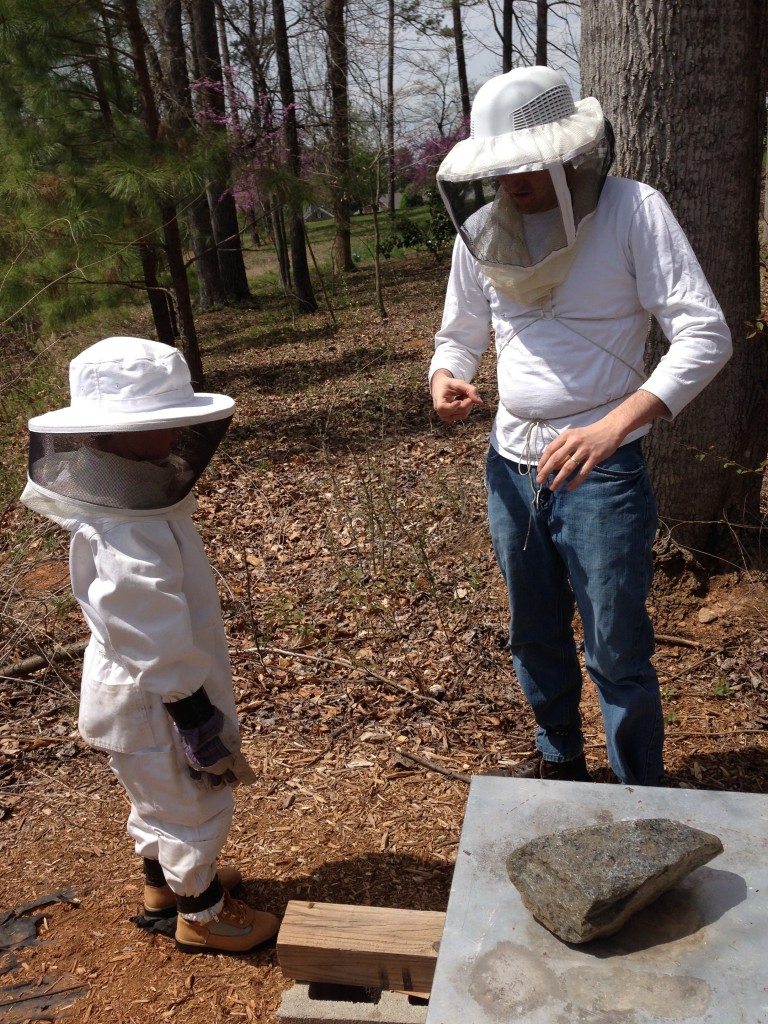 first things first. the smoker. here’s where the bee movie was slightly inaccurate and a little educating had to take place. (it doesn’t hurt the bees, it makes them think there’s a fire and they might have to move, so they are less interested in stinging folks and more interested in getting ready for the move). isaac felt secure being in charge of the smoker. 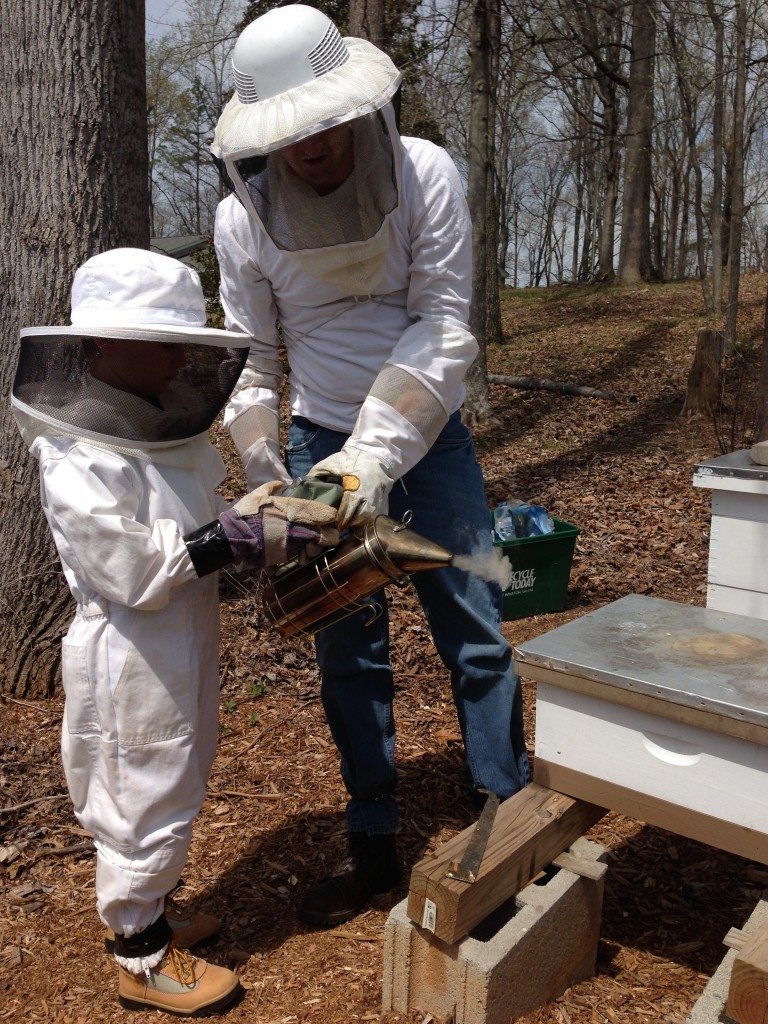 we looked at the empty hive first, to help with nerves and learn about the hive without it being coated in bee business. 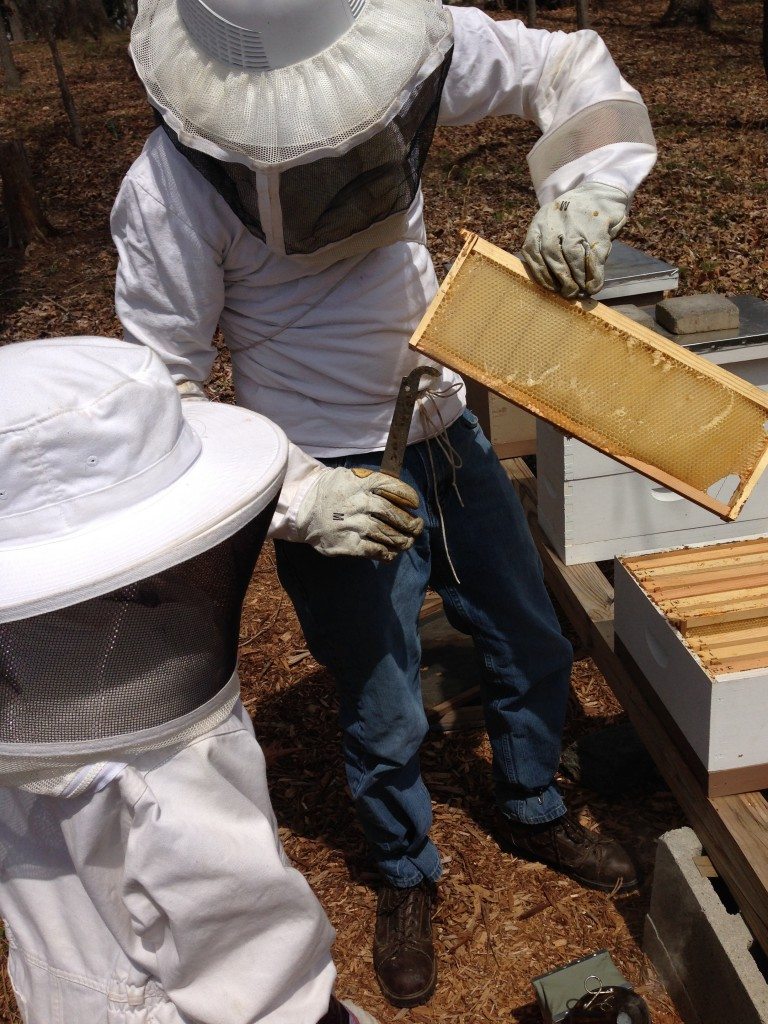 onto the new hive. isaac handled the smoking task. 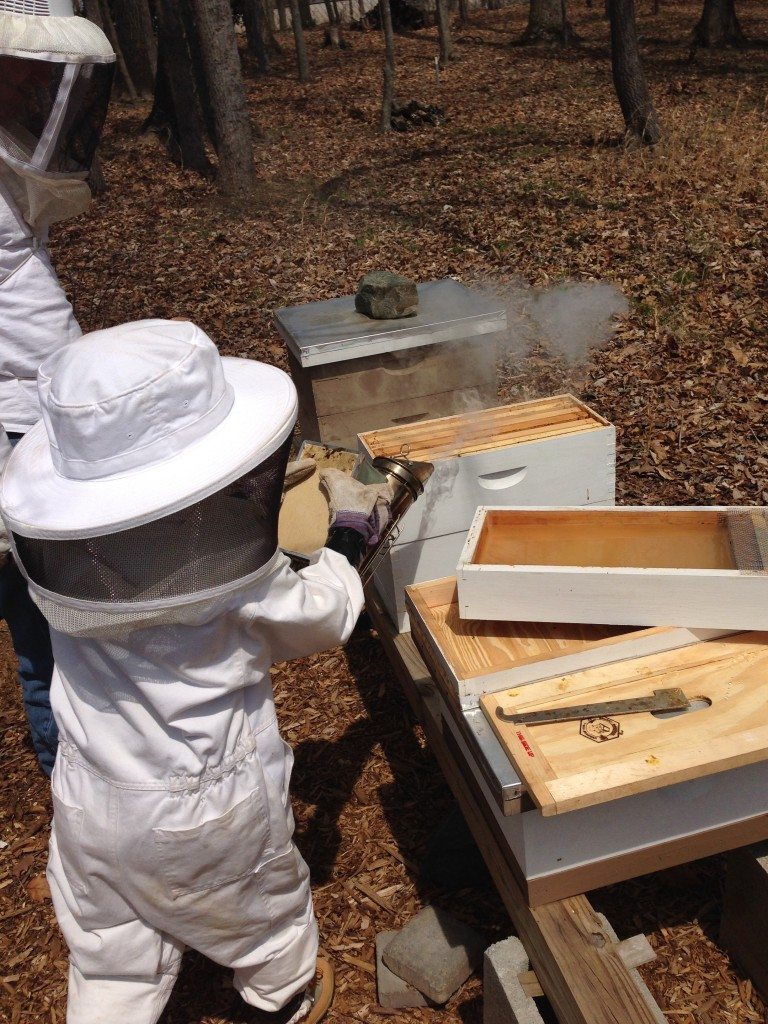 mark showed us the different cells, with larvae and honey. and we got to see two queen cells. interesting fact. the bees usually choose which queen they like best and help her hatch(?) first. her first duty, flying around to find the other queen cells to sting them and kill the other possible queens. 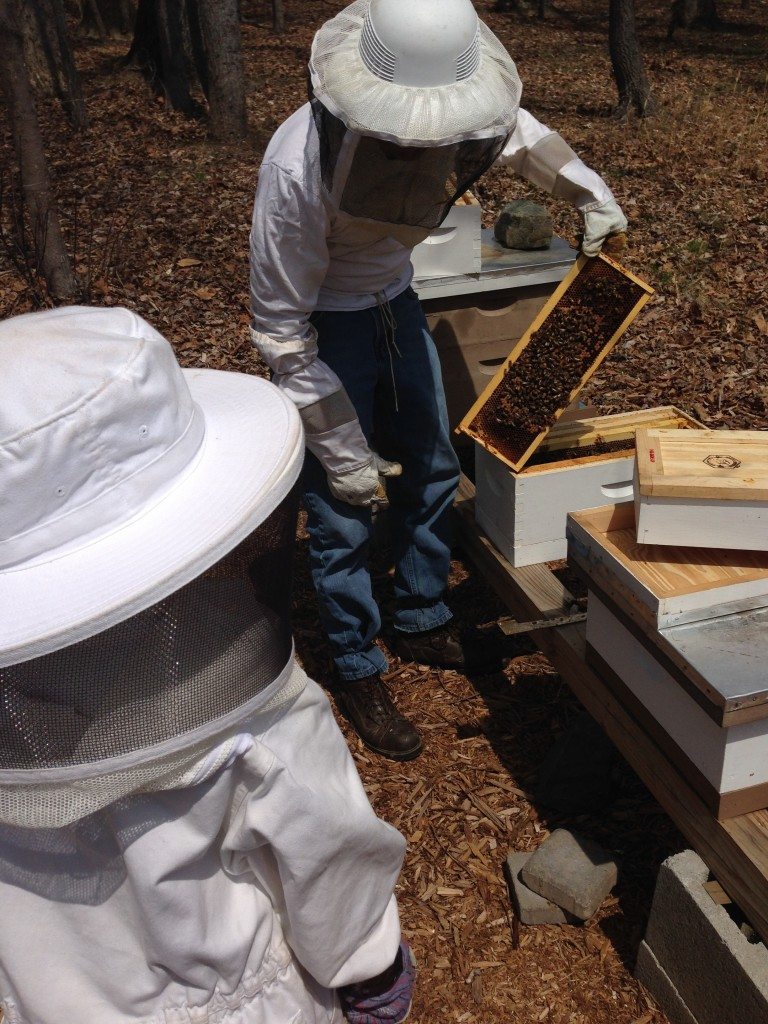 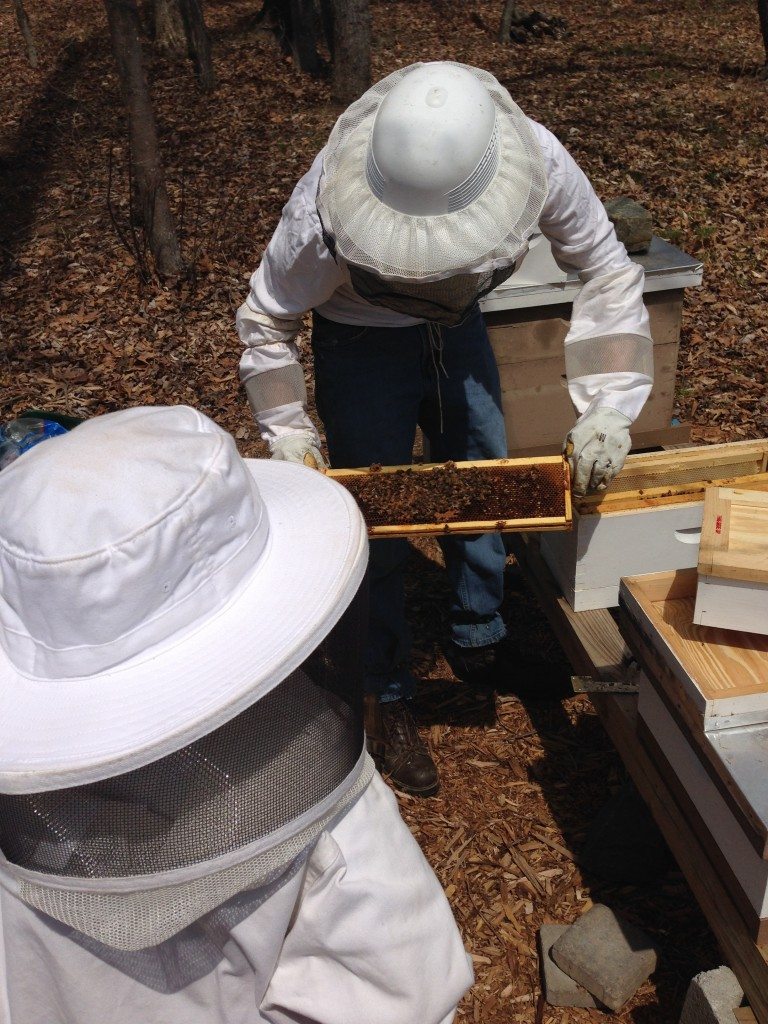 then, we moved onto the big hive. isaac was getting a little nervous at this point. i think he felt he had pressed his luck enough. 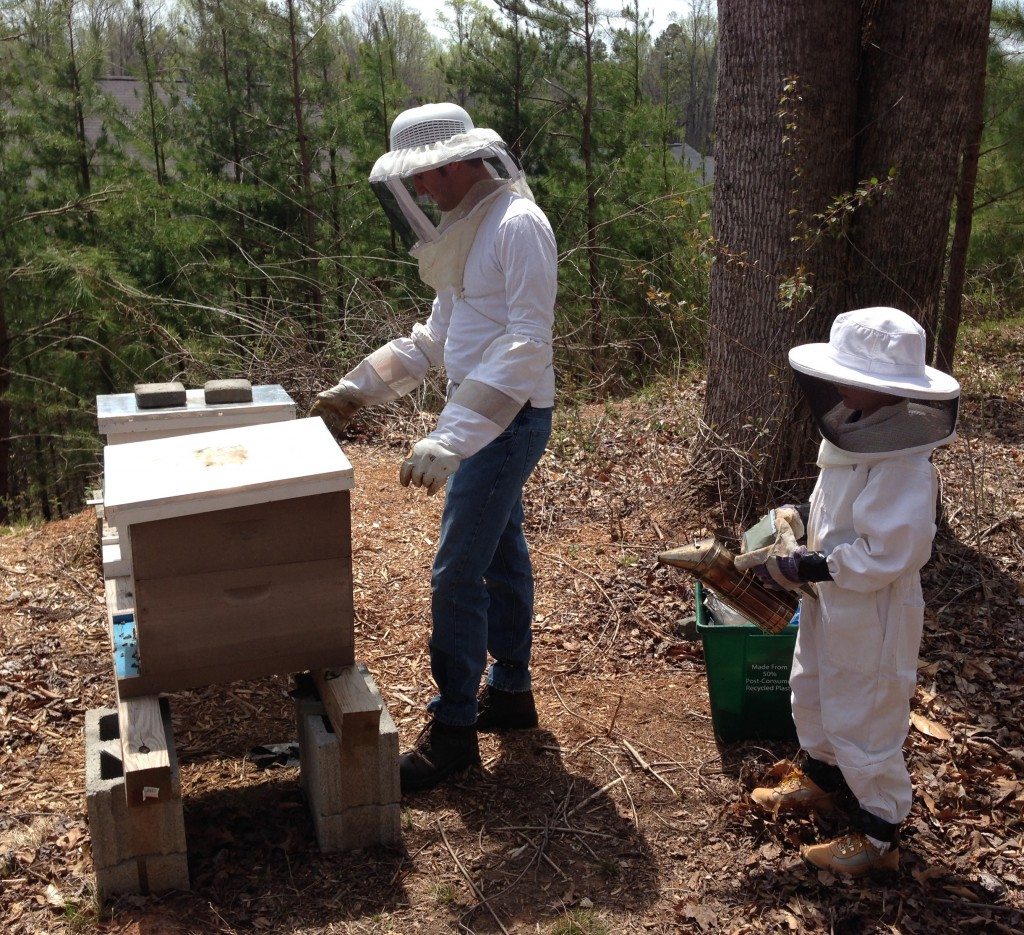 the big hive was so much busier. we saw all the pollen (and tried to smell it, but someone was gratuitously using the smoker, so we mostly just smelled smoke). there was so much honey. we saw that some was capped and finished and others were still open for the bees to work on. mark tried to show some larvae, but it required getting a little closer than isaac was comfortable with. (same thing with seeing the pollen baskets on their legs). 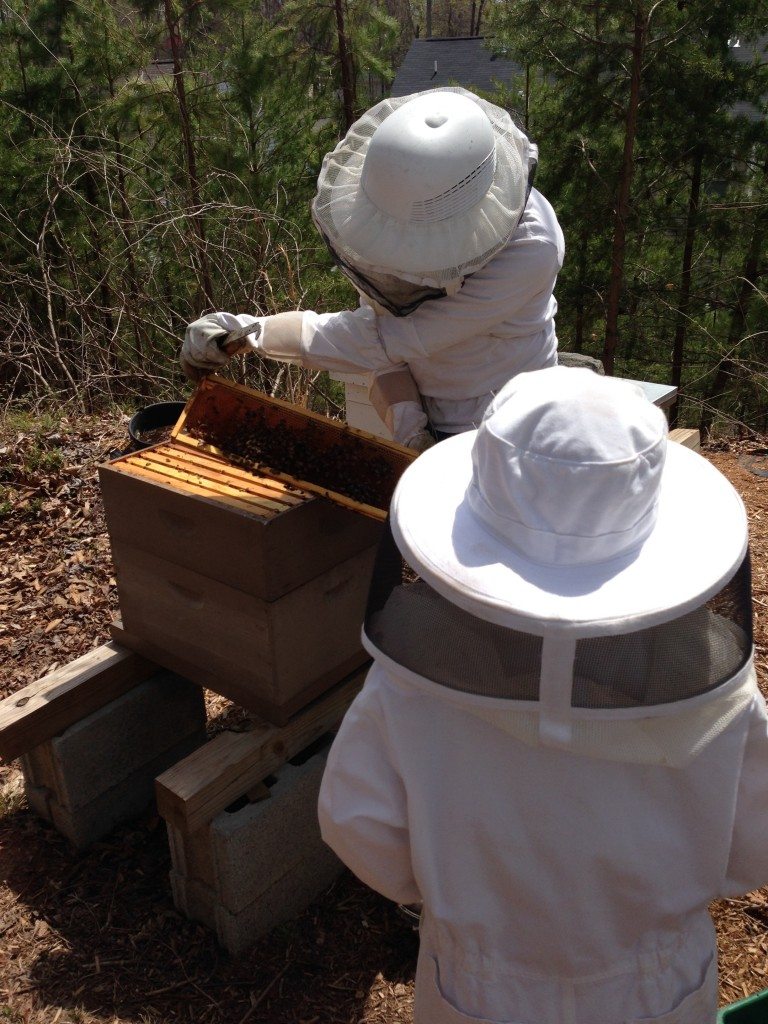 the smoker. in action. 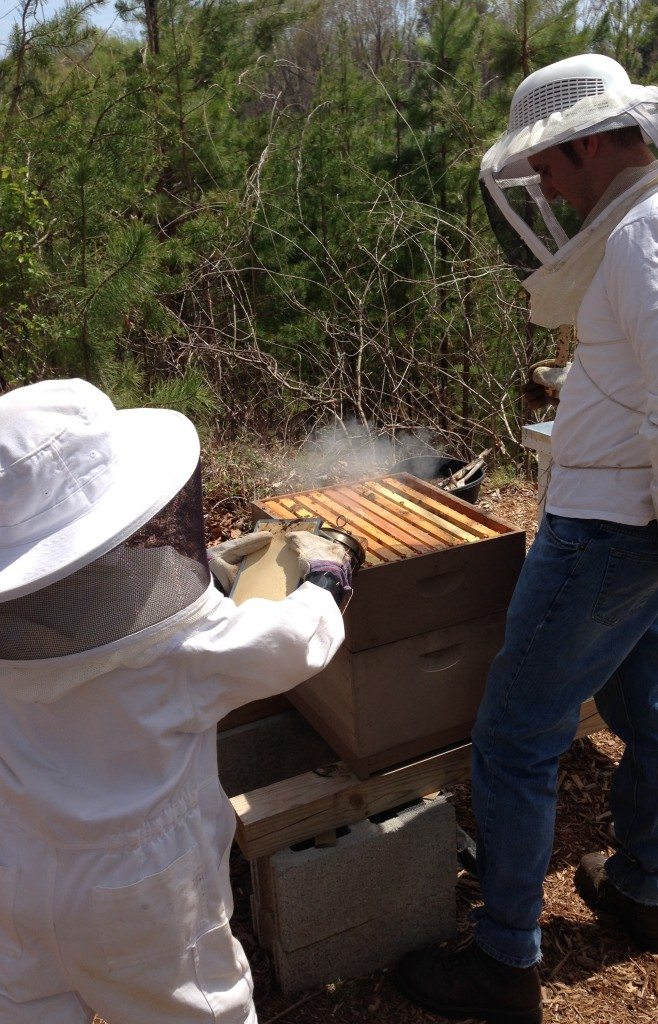 anyhooo…. all went great. i was very pleasantly surprised with how well isaac did. and a big shout out to mark and his family. he was so great at explaining everything and making isaac comfortable. it was a great field trip. and thanks to allison, for managing all of the girls, so i could tag along. 🙂

lastly, here’s the baby girls on their first play date. 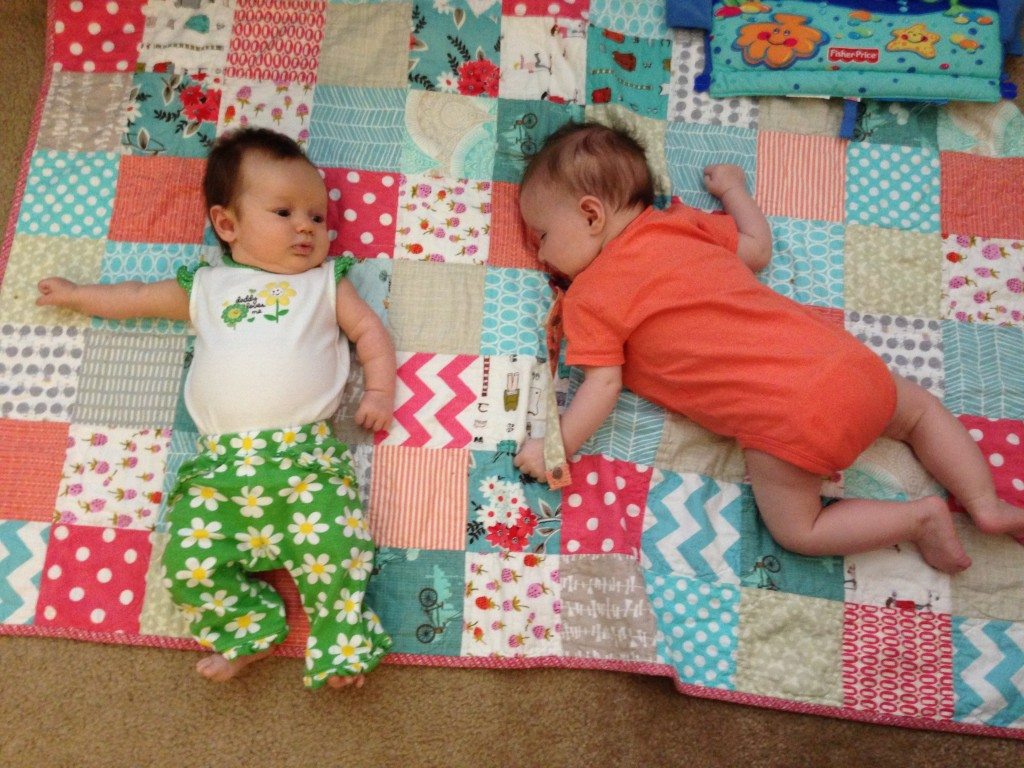