for our first grand adventure in the state of arizona, we chose the desert botanical garden in phoenix. the lidkids actually voted for it, out of all the options presented to them. we definitely like cactuses in this family.

on the stroll in, i took this shot, to showcase our first usage of the trio of backpacks my mom got for the kids. 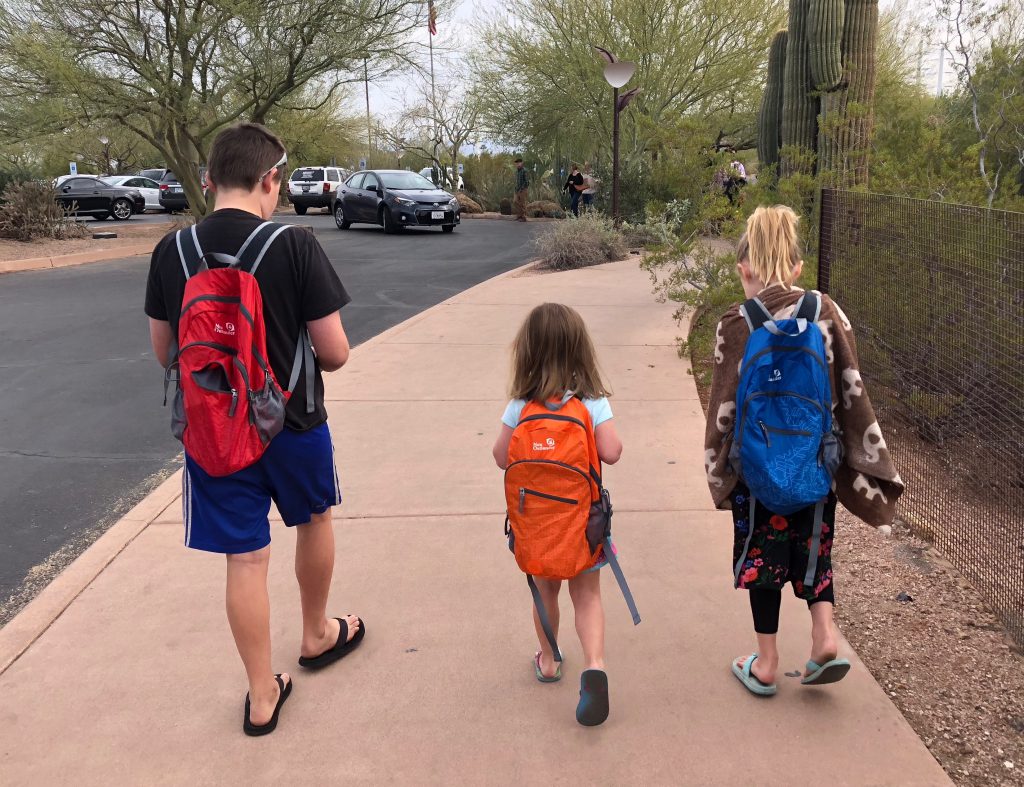 we stopped at this cool wall of cacti, where a not so delightful staff member told the kids not to touch the cactuses because they might poke them. um. duh? 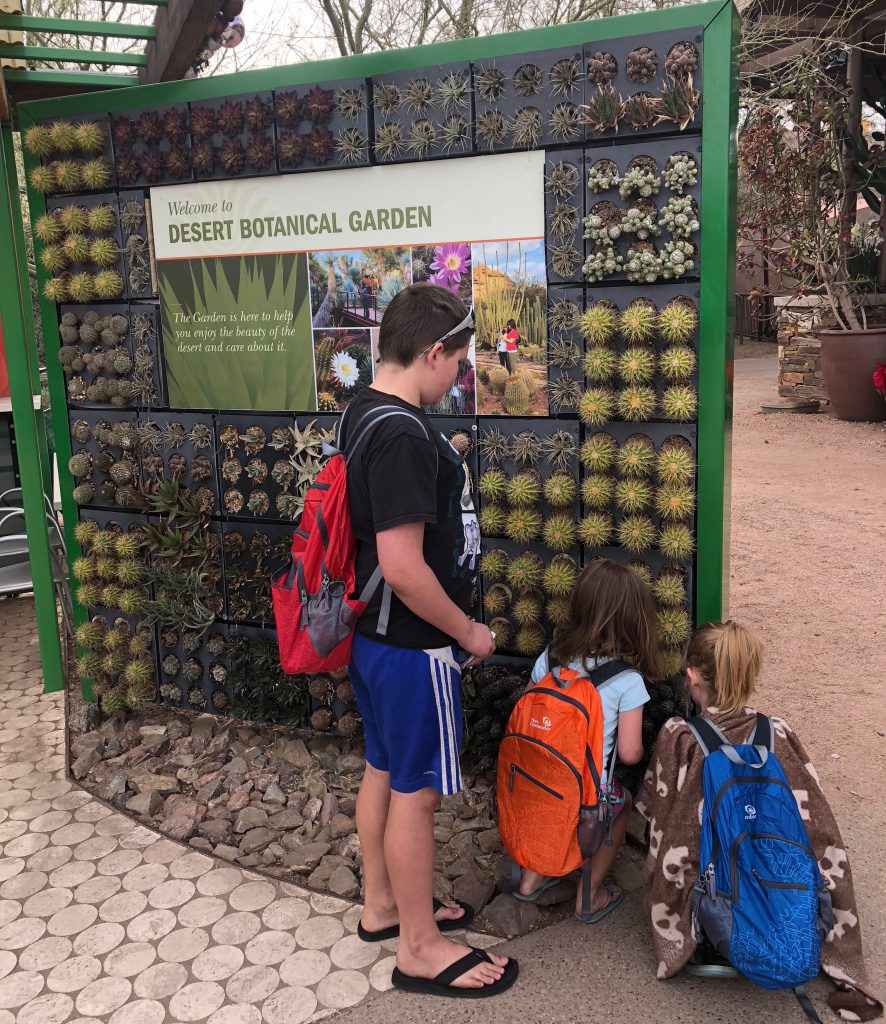 official first commemorative pic. with a weird head art piece, the first of many scattered throughout the garden. 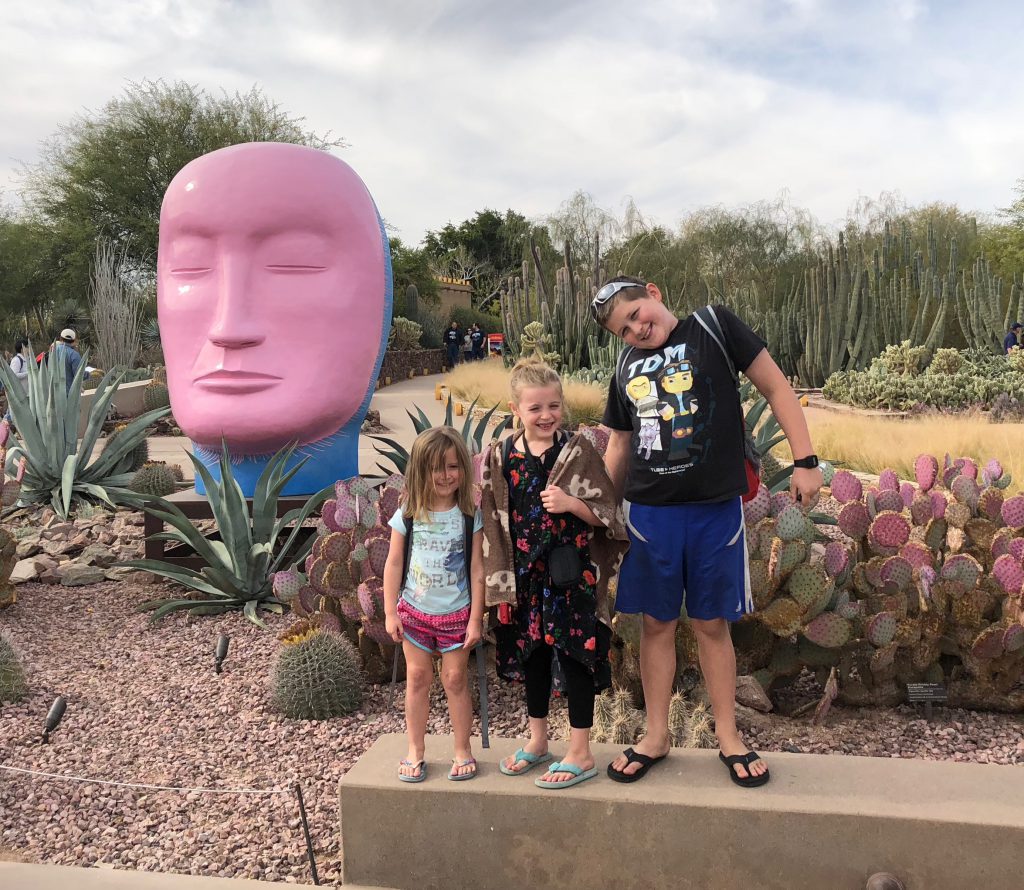 we were fans of the organ pipe cactus, which are only found closer to mexico (they have their own national monument, off the beaten path, that we passed over). 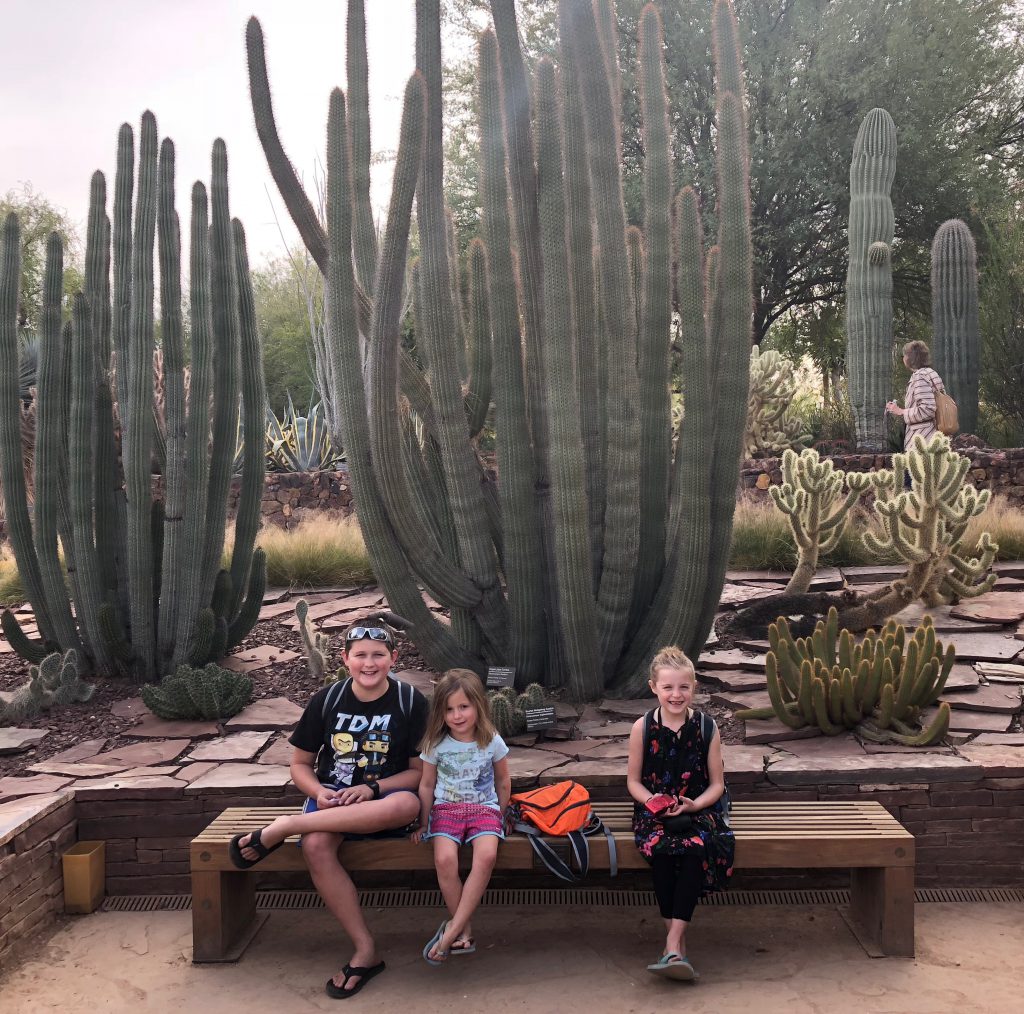 once we were inside, no one could tell us not to touch the spikes. 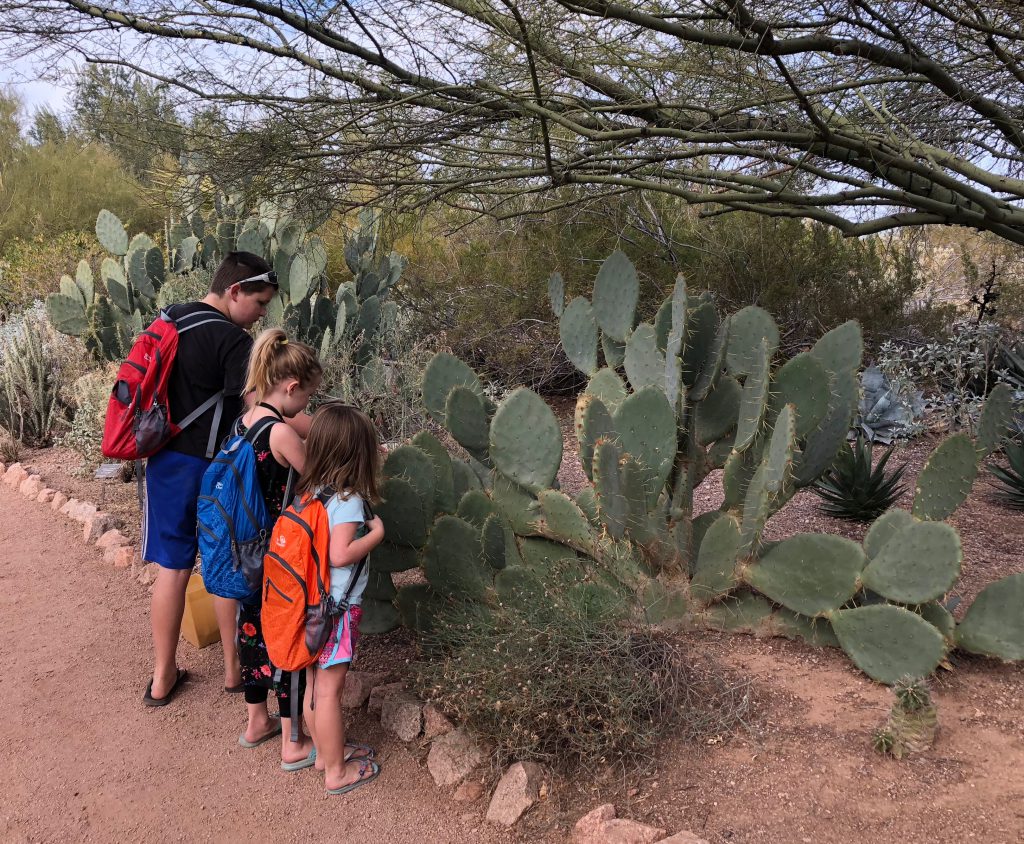 we finally got some up close encounters with the iconic saguaro cactus. 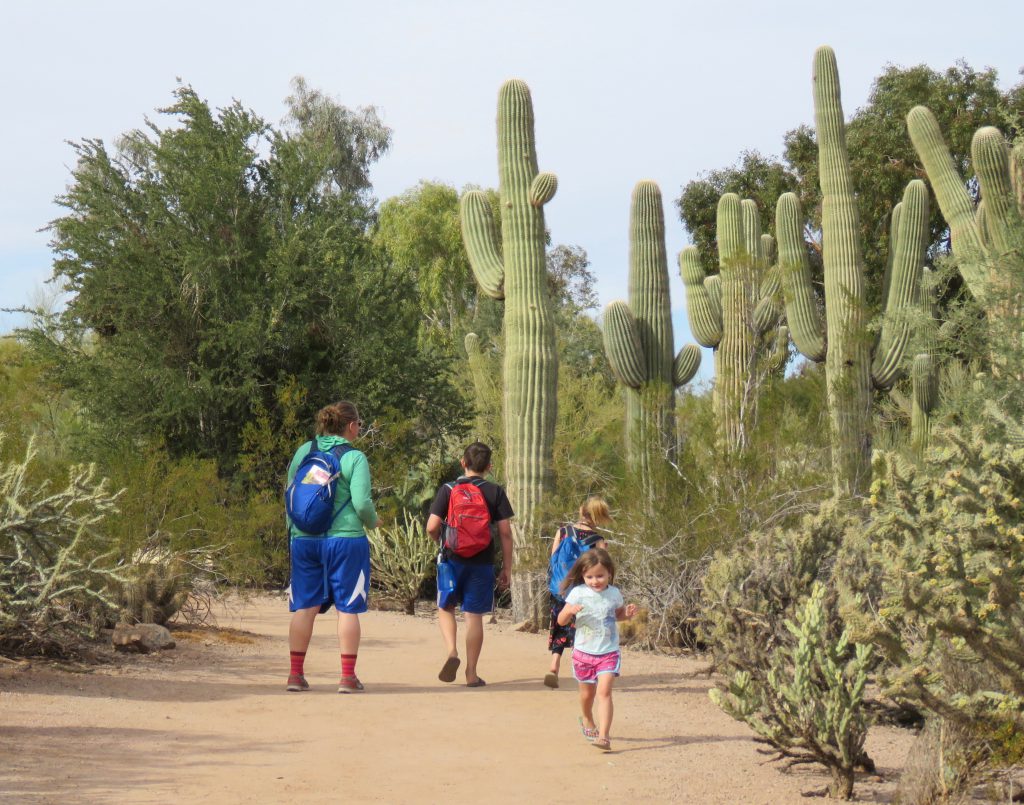 and derek even managed to be captured on camera. 🙂 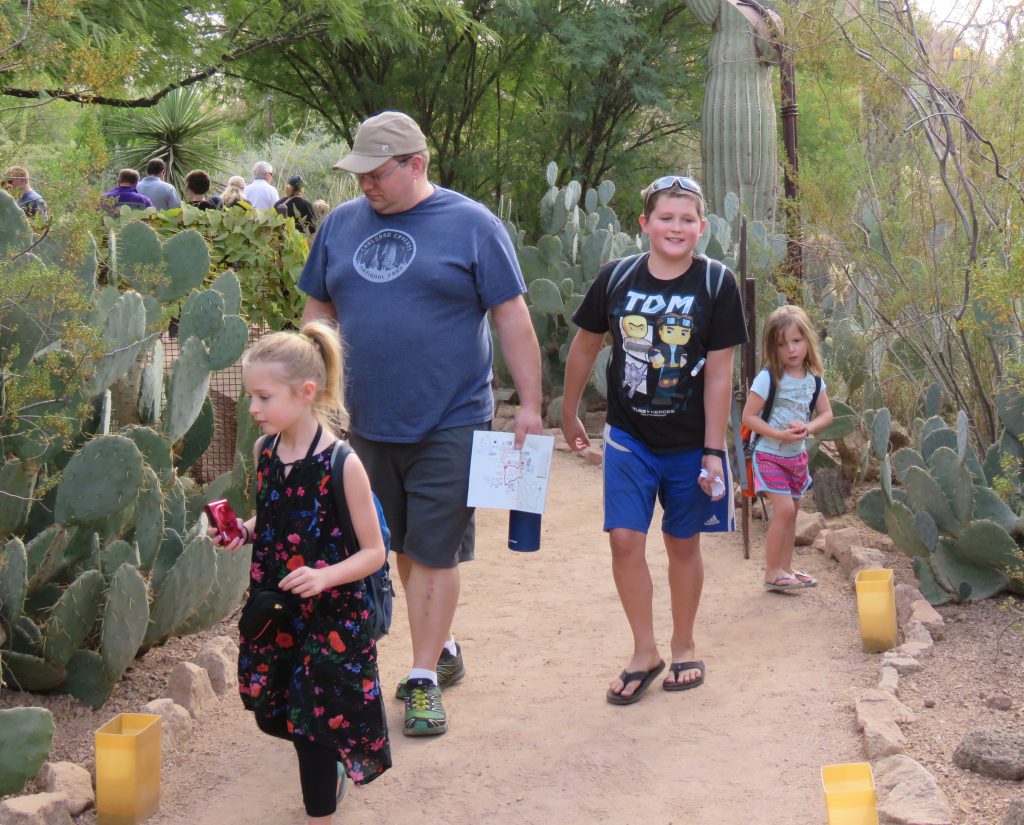 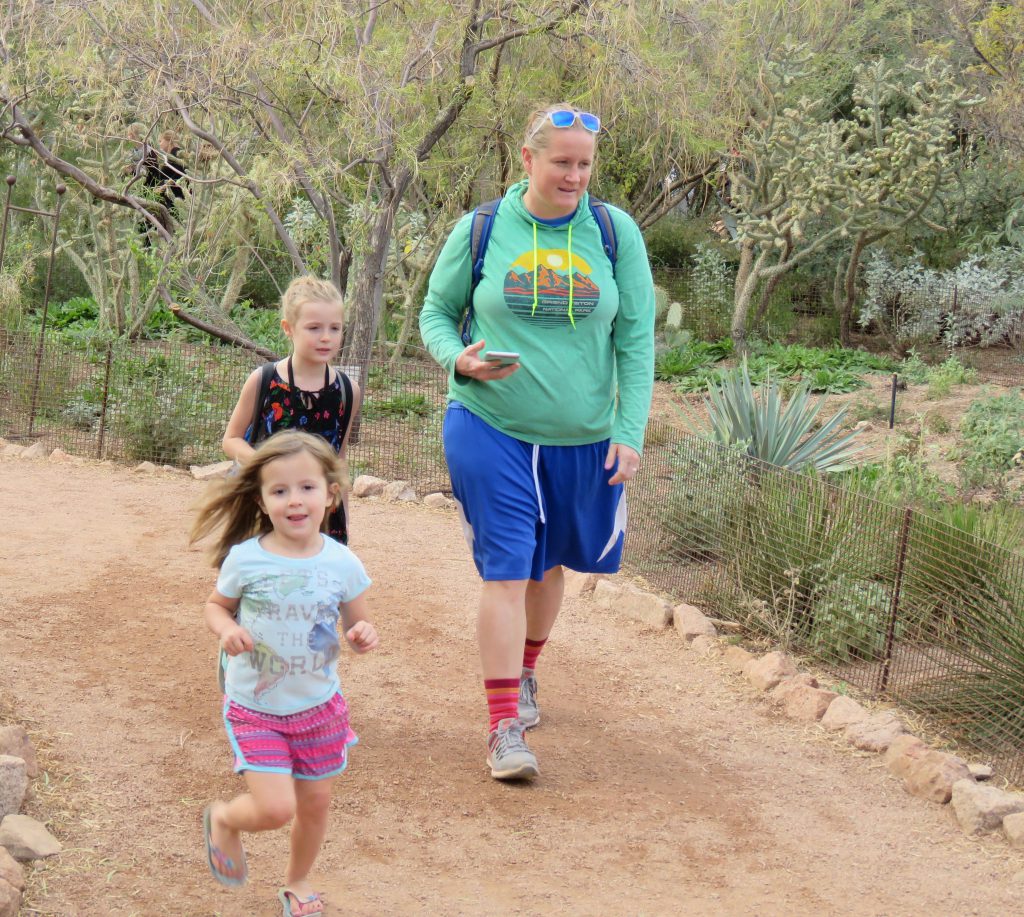 one of our favorites was the bunny ear cactus, with soft fuzzy spots in the spot where spiky spines are normally found. 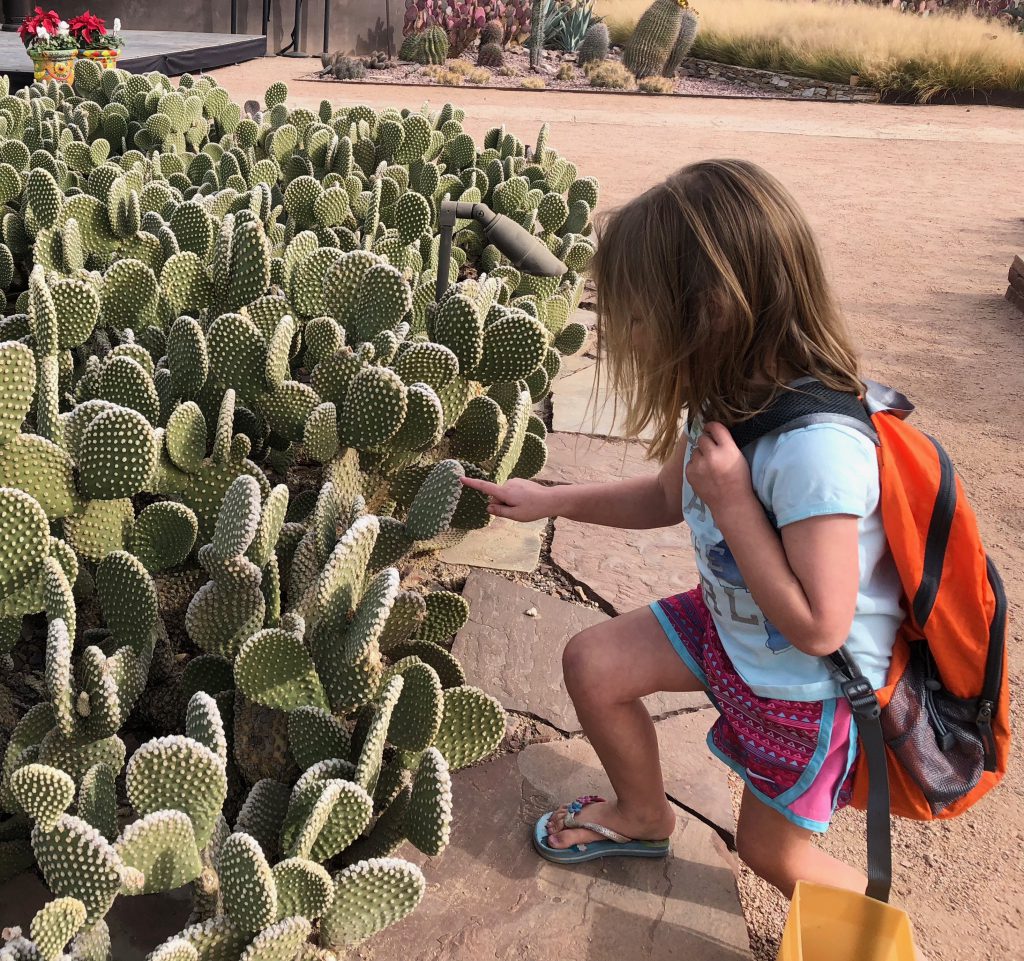 there were all sorts of new fun cactus varieties to admire, some that made us imagine the horror of running into them on a hike in the wilderness. 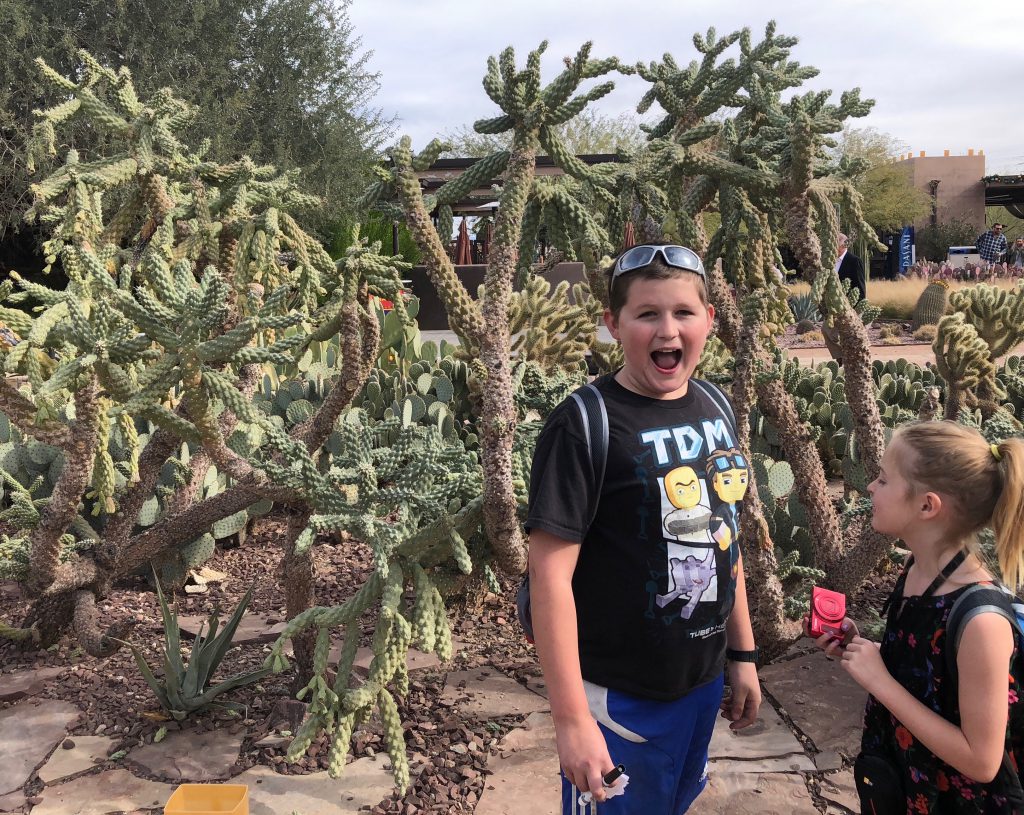 bird on a cactus. 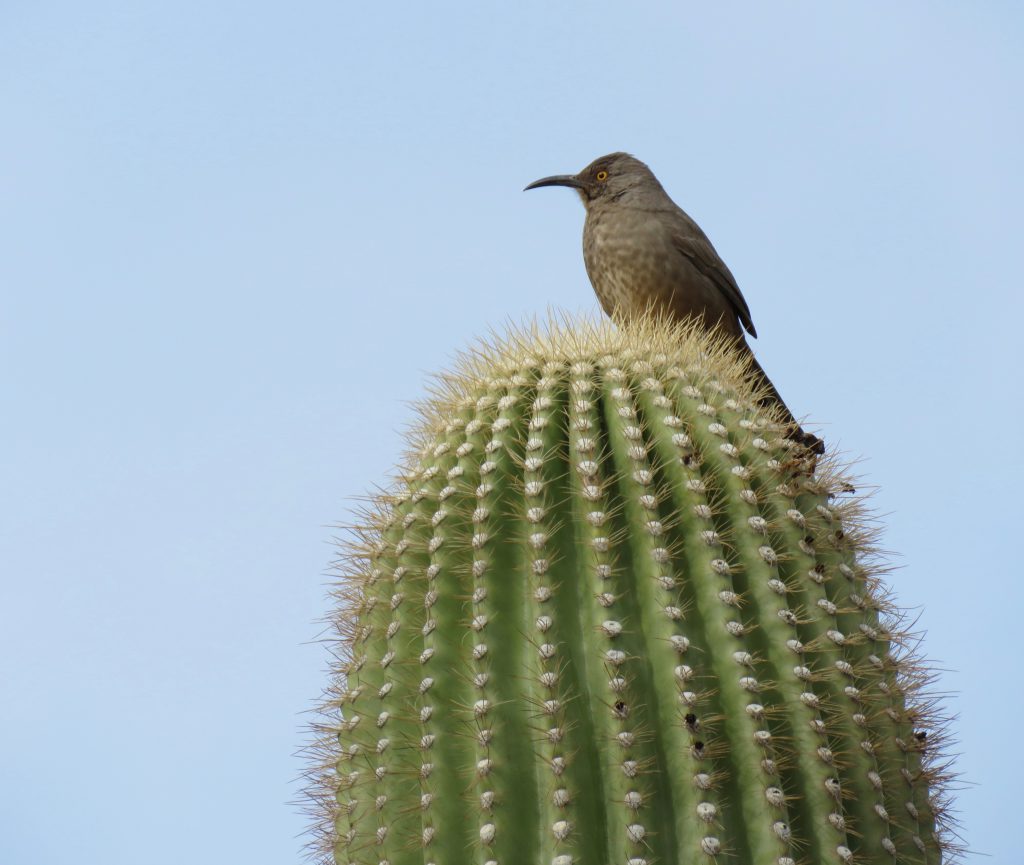 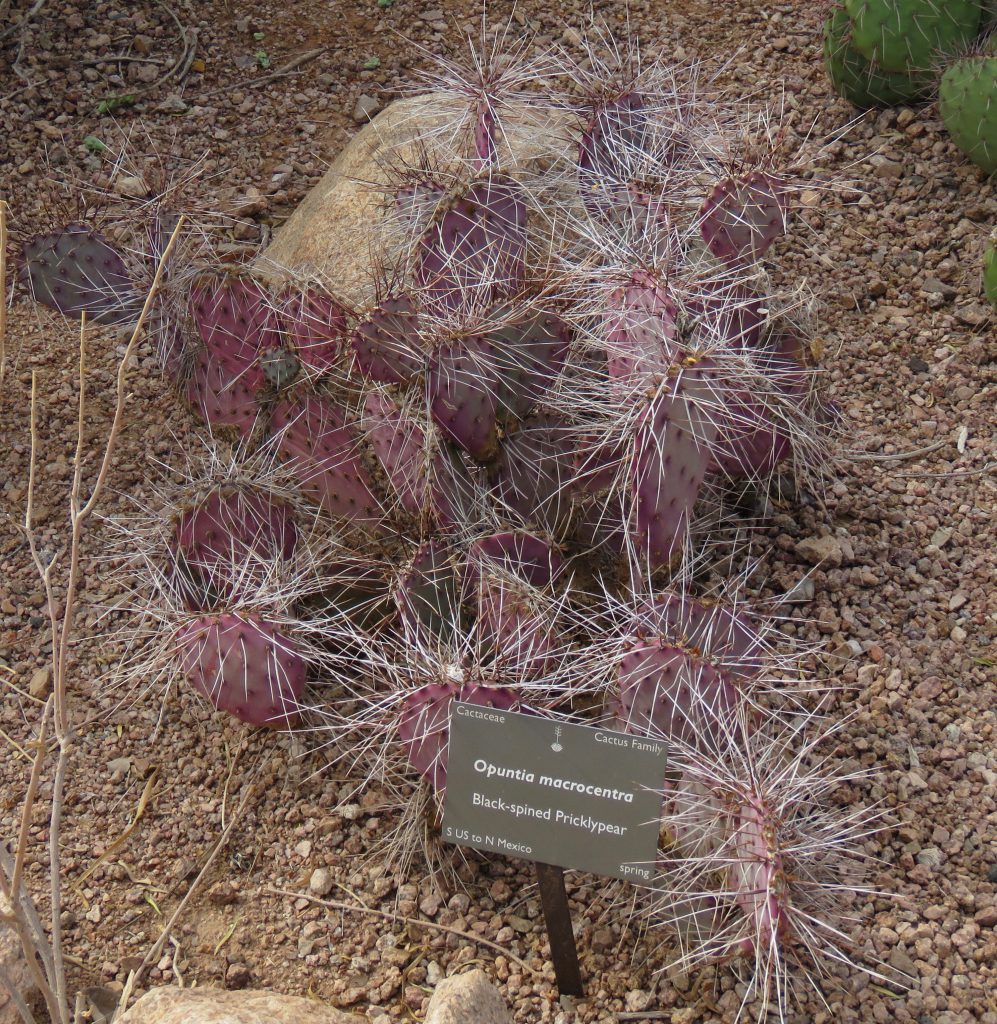 aloe, maybe? i can’t remember anymore. (if you haven’t noticed, i’m way behind in my blog postings). 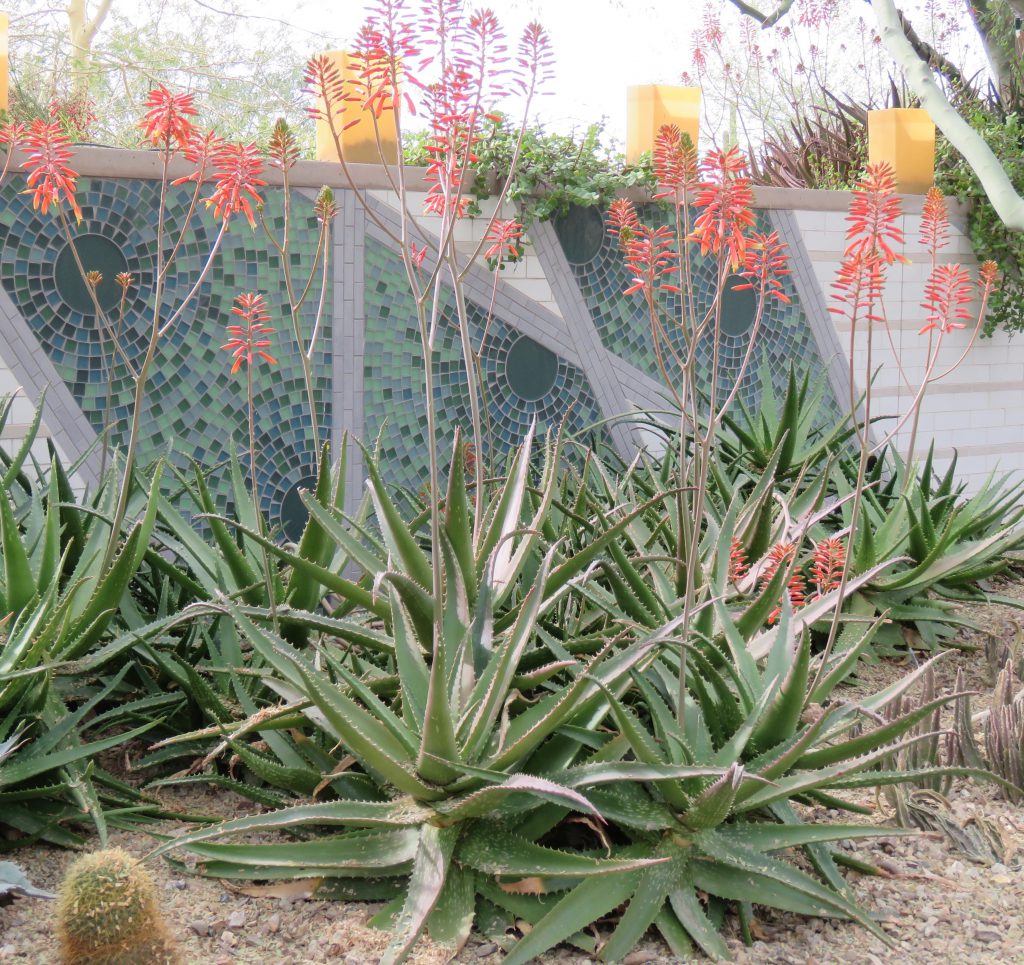 up close of the aforementioned bunny ear cactus. 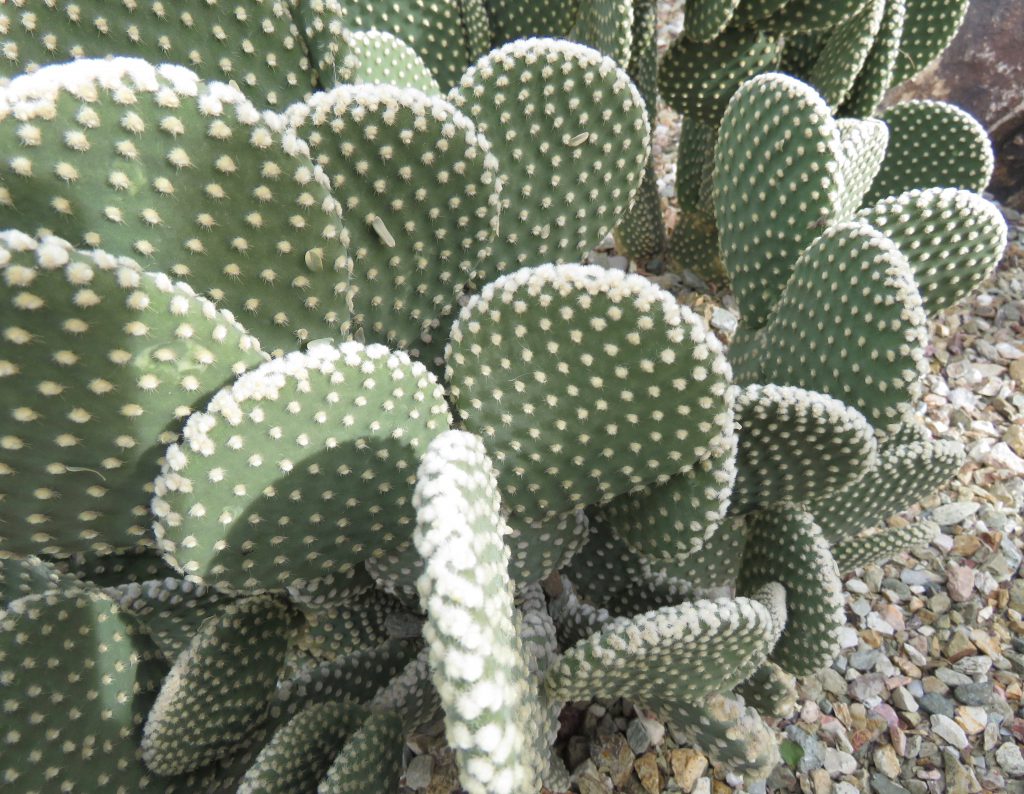 this guy reminded us of an octupus. 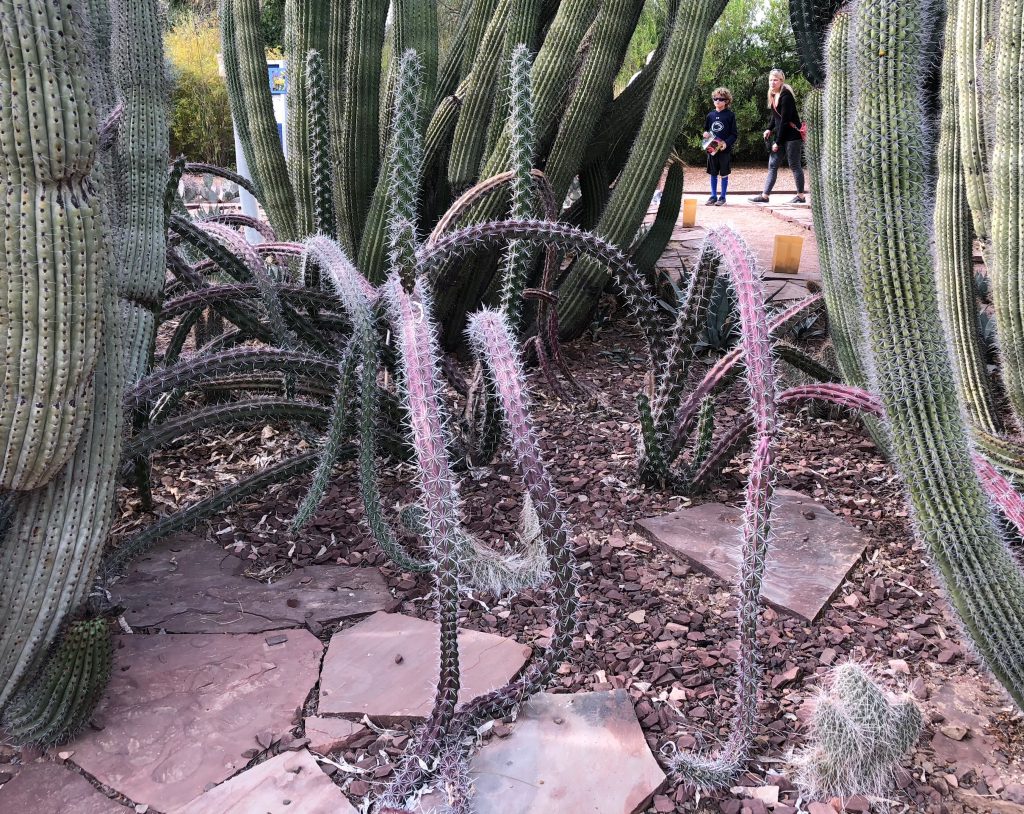 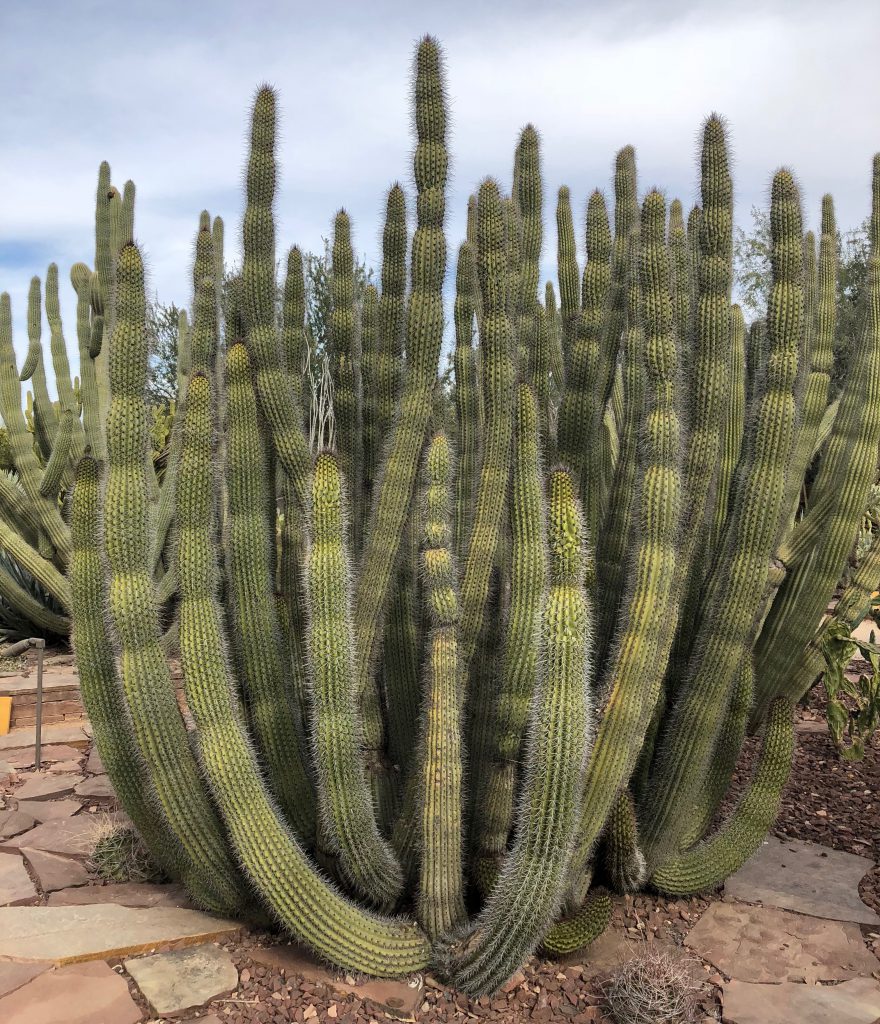 bee on a flower. (there was a dedicated “bee” and “hummingbird” section. thankfully, the bees were a little lethargic and scarce in the bee section and no one ran away screaming and we got some pretty great photos. the hummingbirds were a little more lively and hard to capture.) 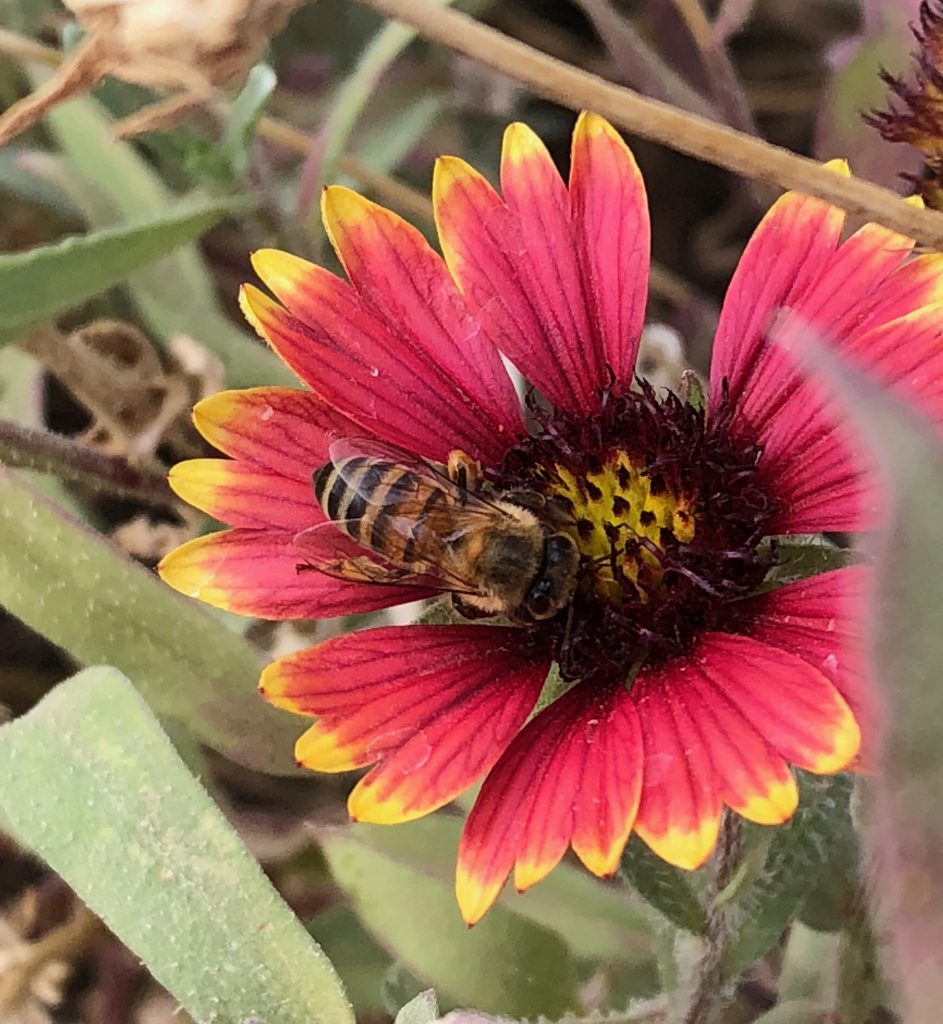 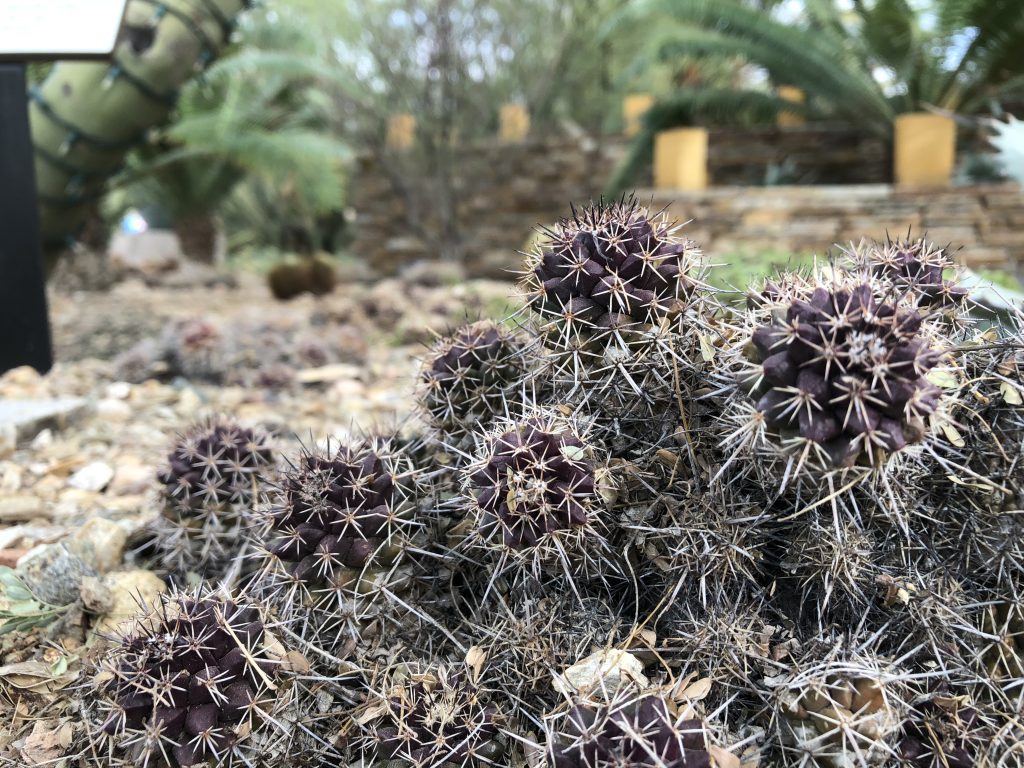 another favorite. the old man cactus. it had long soft overgrown “fur” all over it. 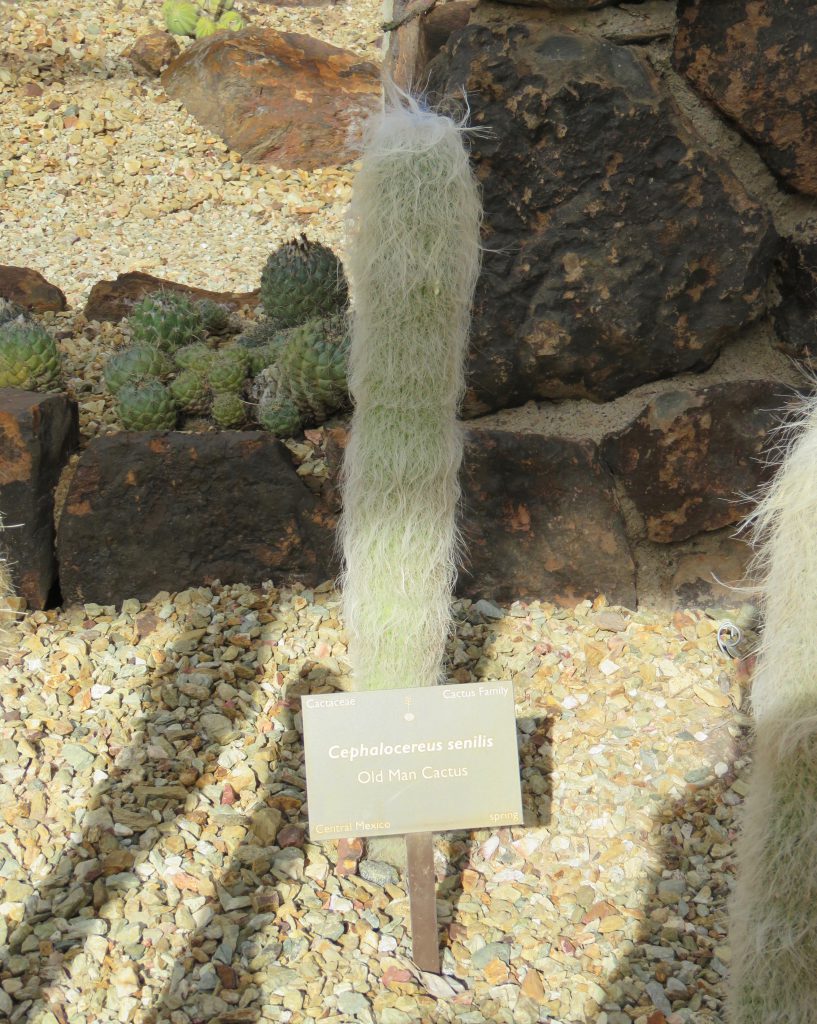 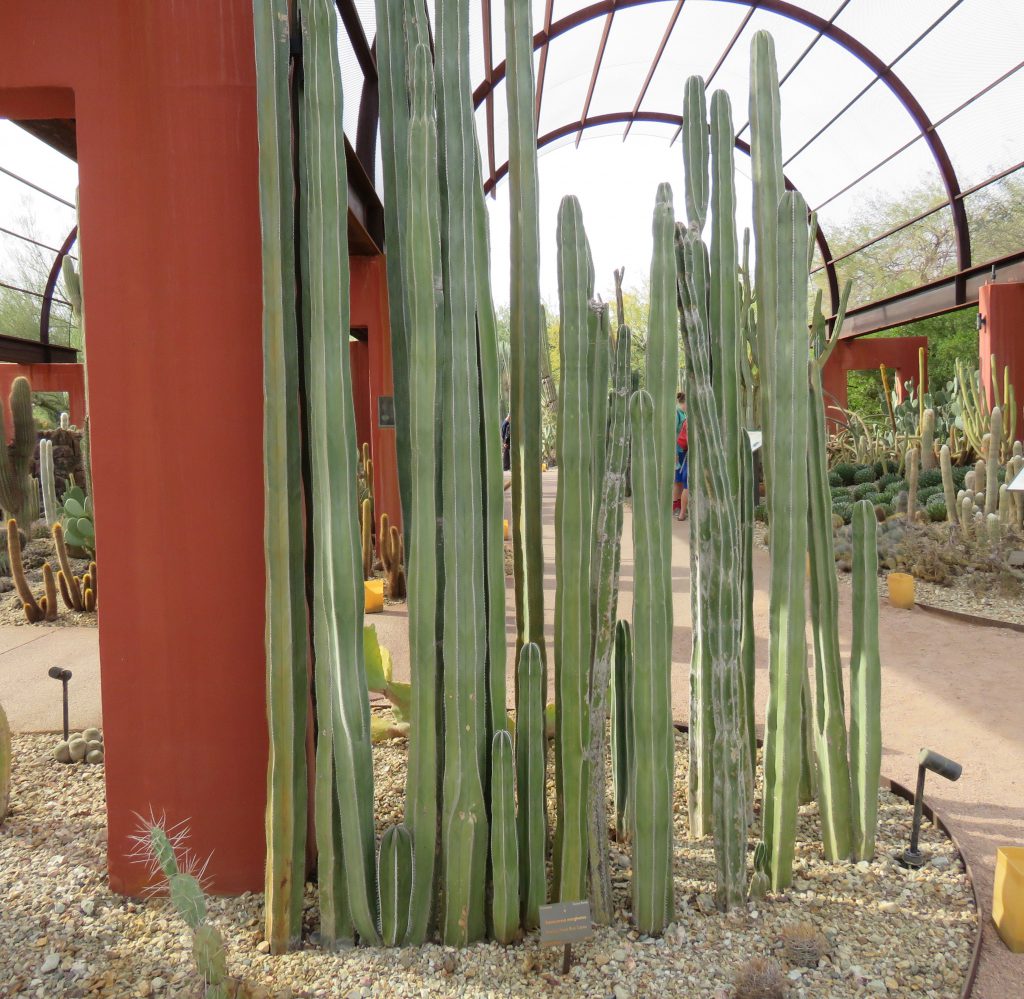 saguaro profiles. these things are so massive and cool. 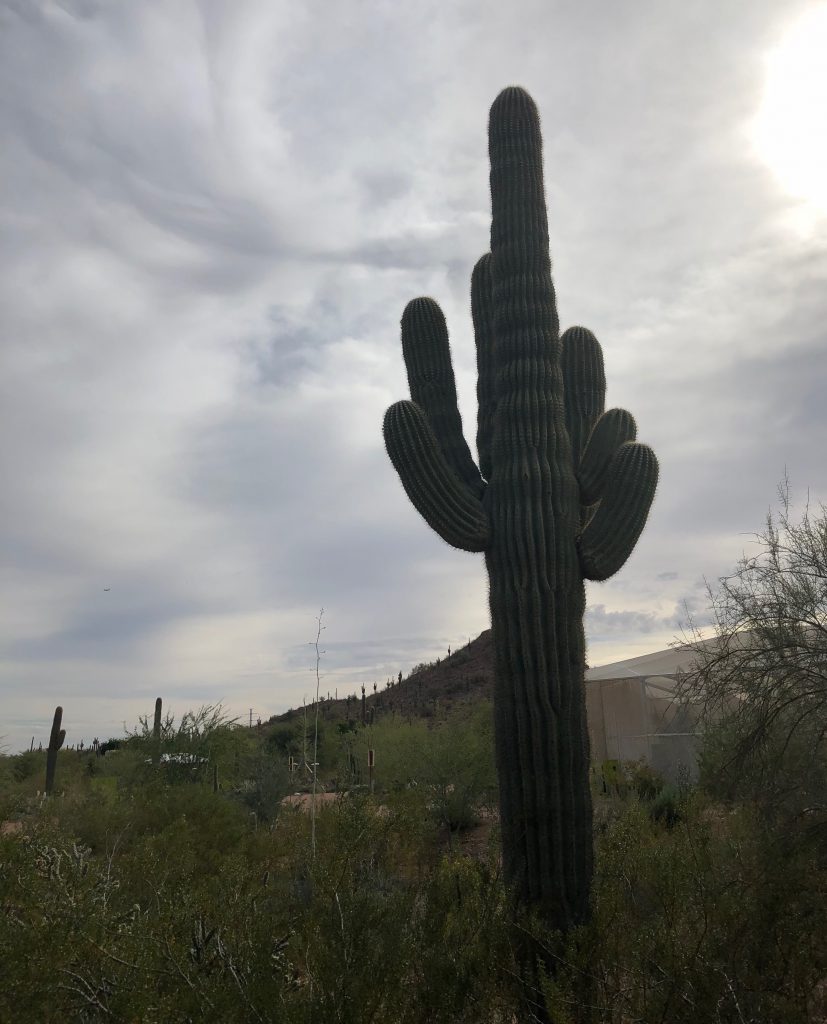 cristate, or crested saguaro, cause unknown. 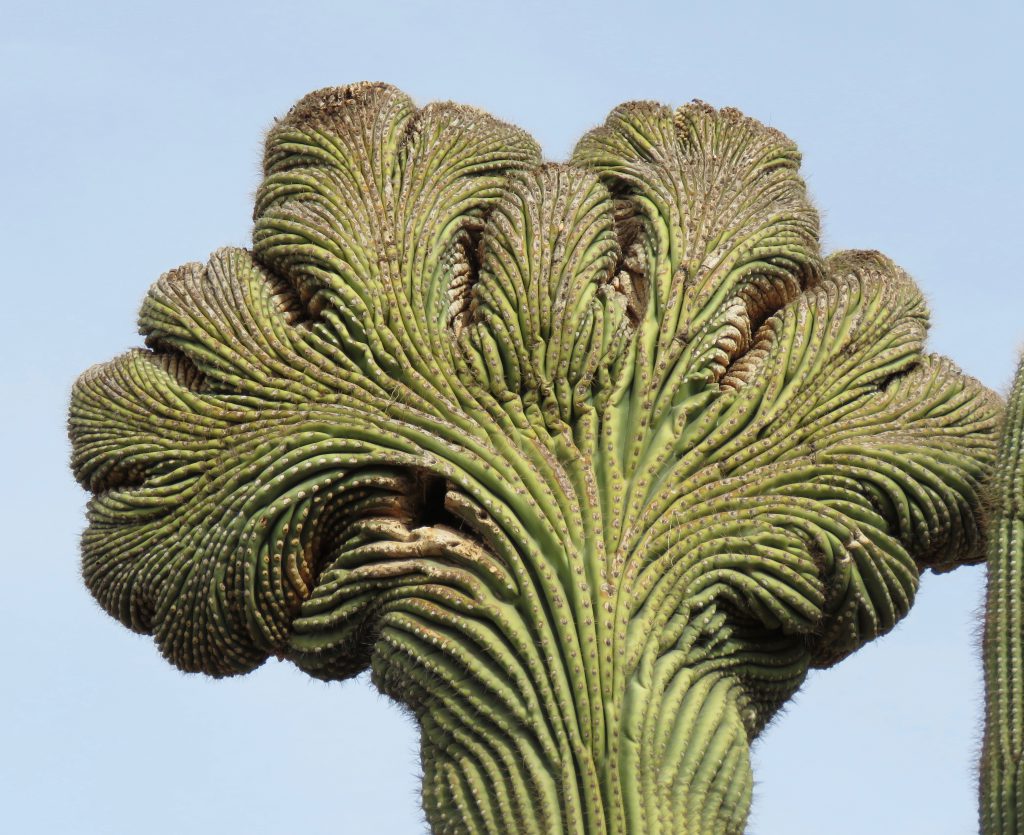 remember i told you about the weird art scattered around in the garden? well, here’s some of it. 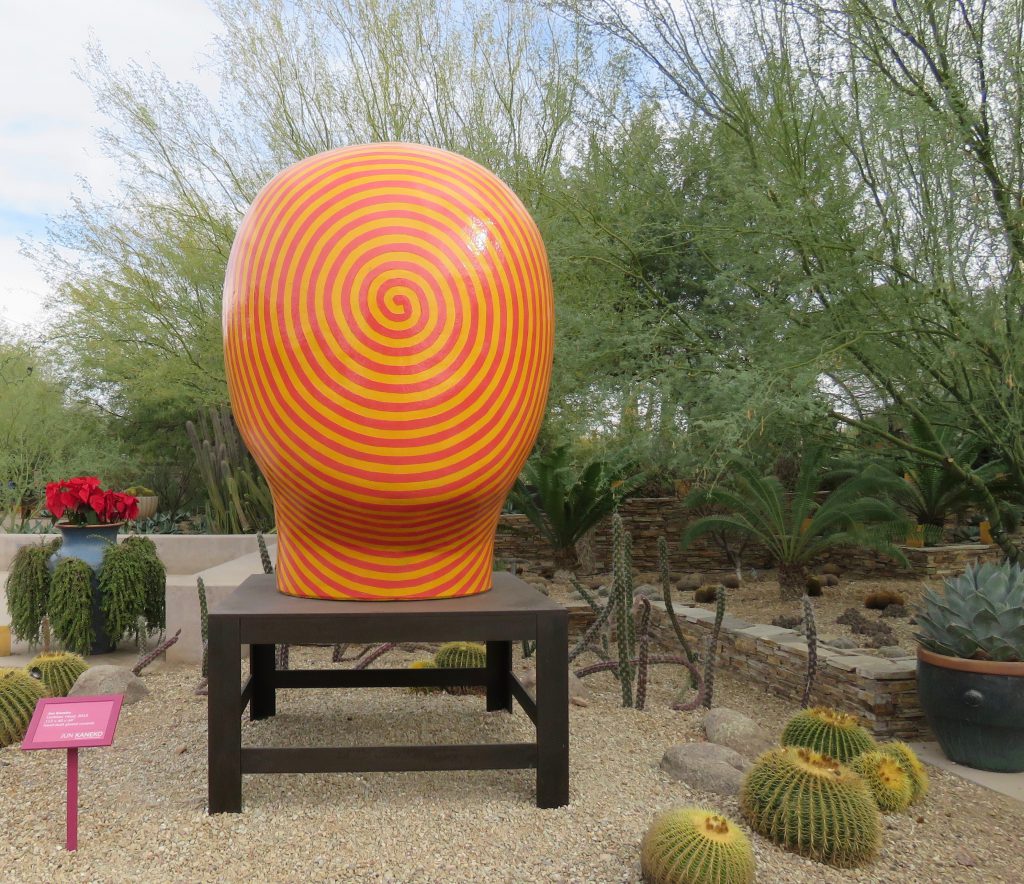 hazel was sort of obsessed with these bear/pigs(?). mostly their butts, because she’s four. 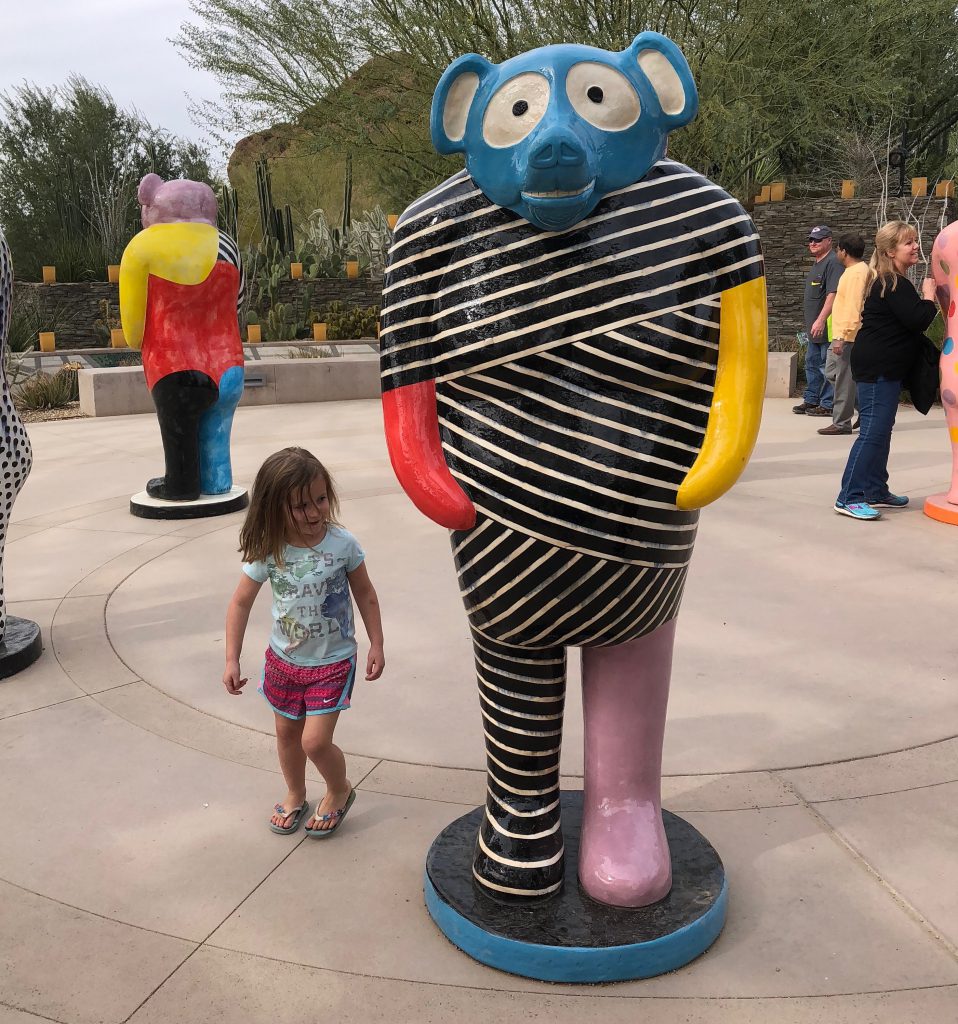 we picked out our favorite. 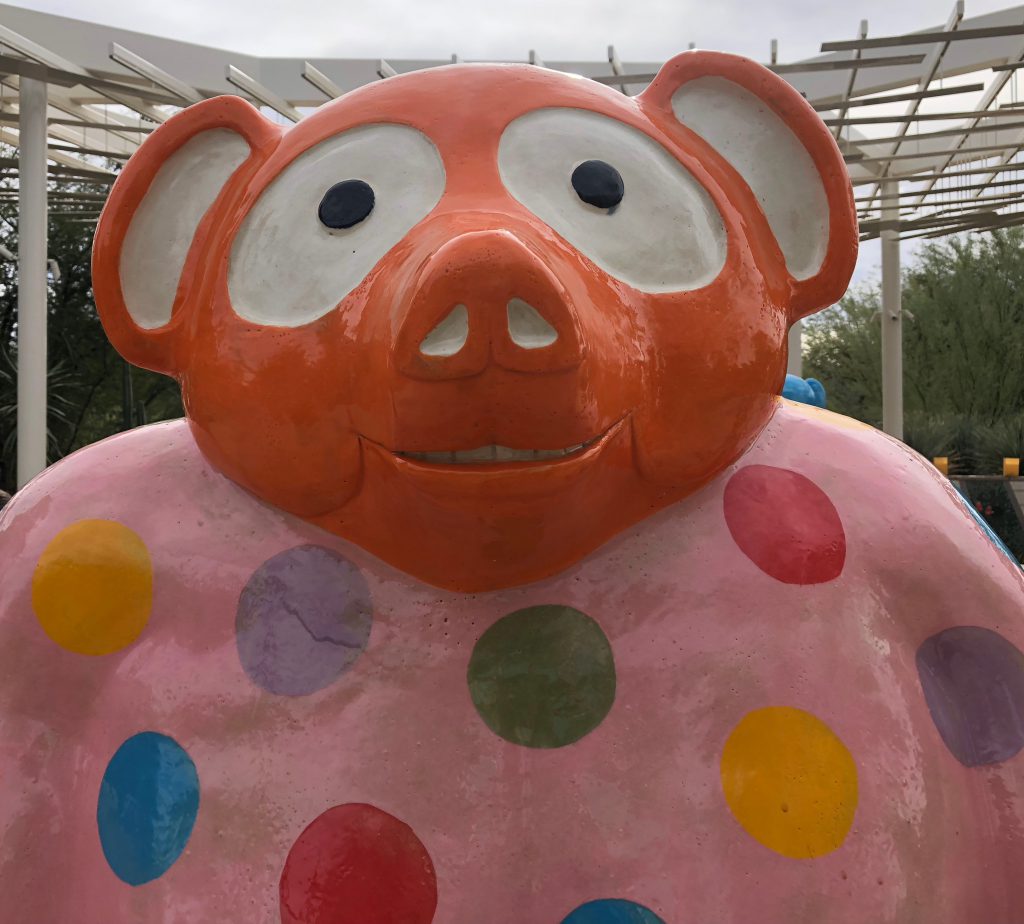 on one loop of the trail, we got a little history lesson about some native folks in the desert, and how they would have constructed living areas out of natural resources. but mostly it was fun to run in the huts. 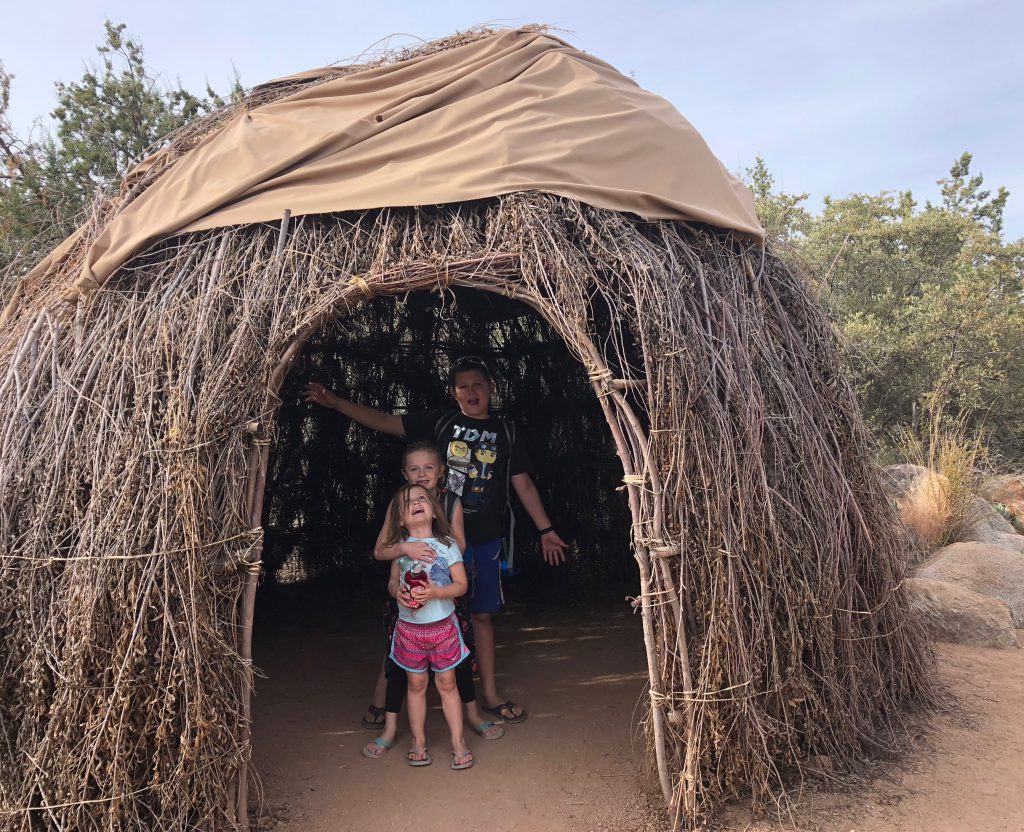 i wish i could say i paid better attention to the information signs, but i didn’t. 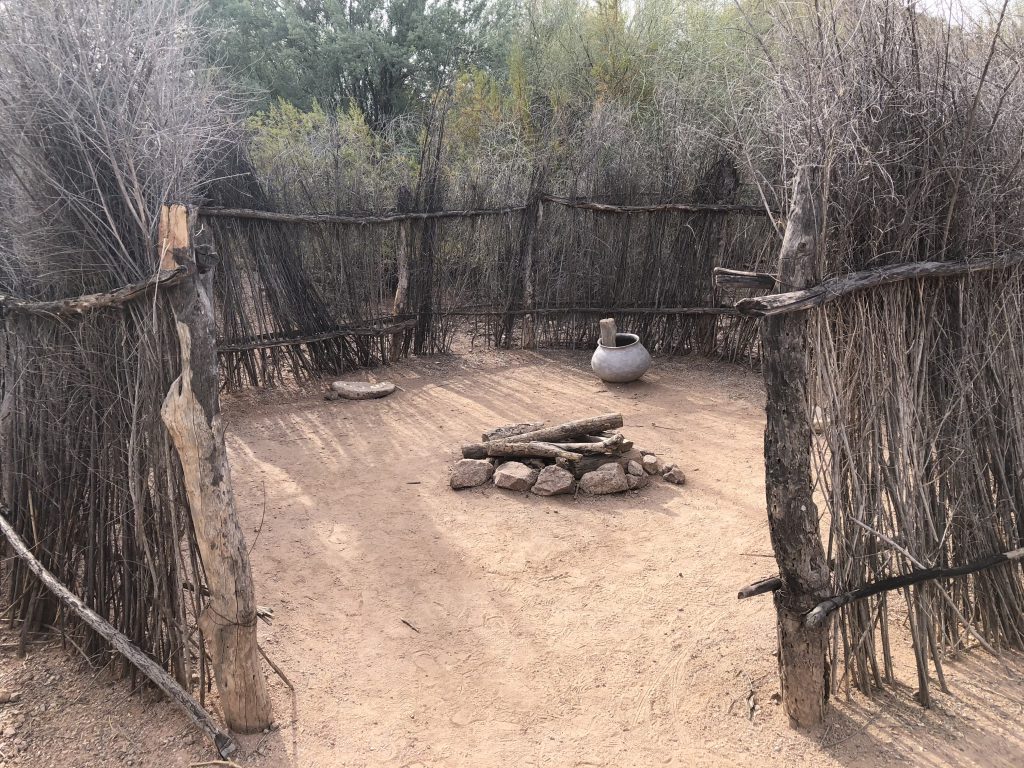 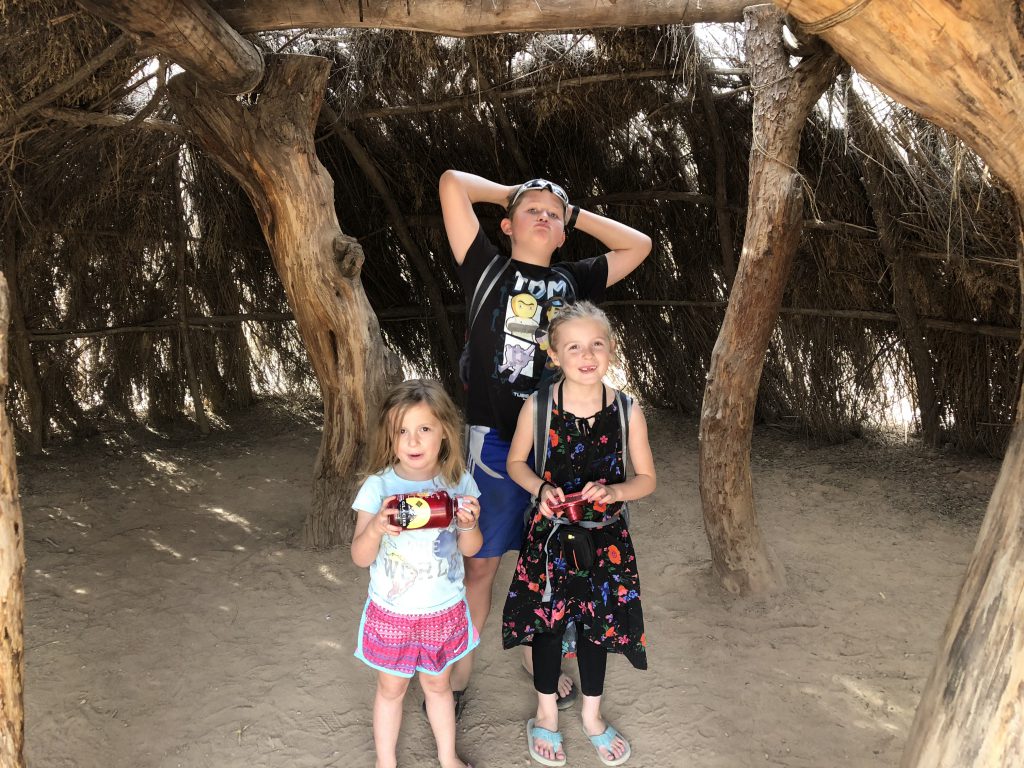 before we left, we made sure to get some selfies with a massive saguaro near the path. 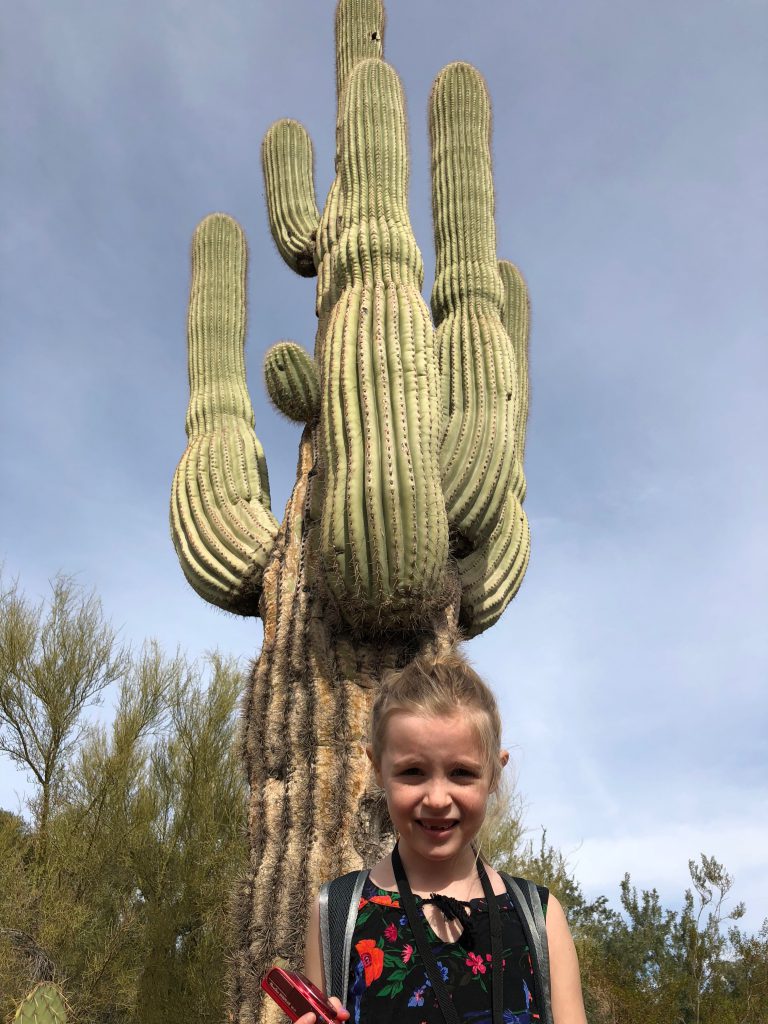 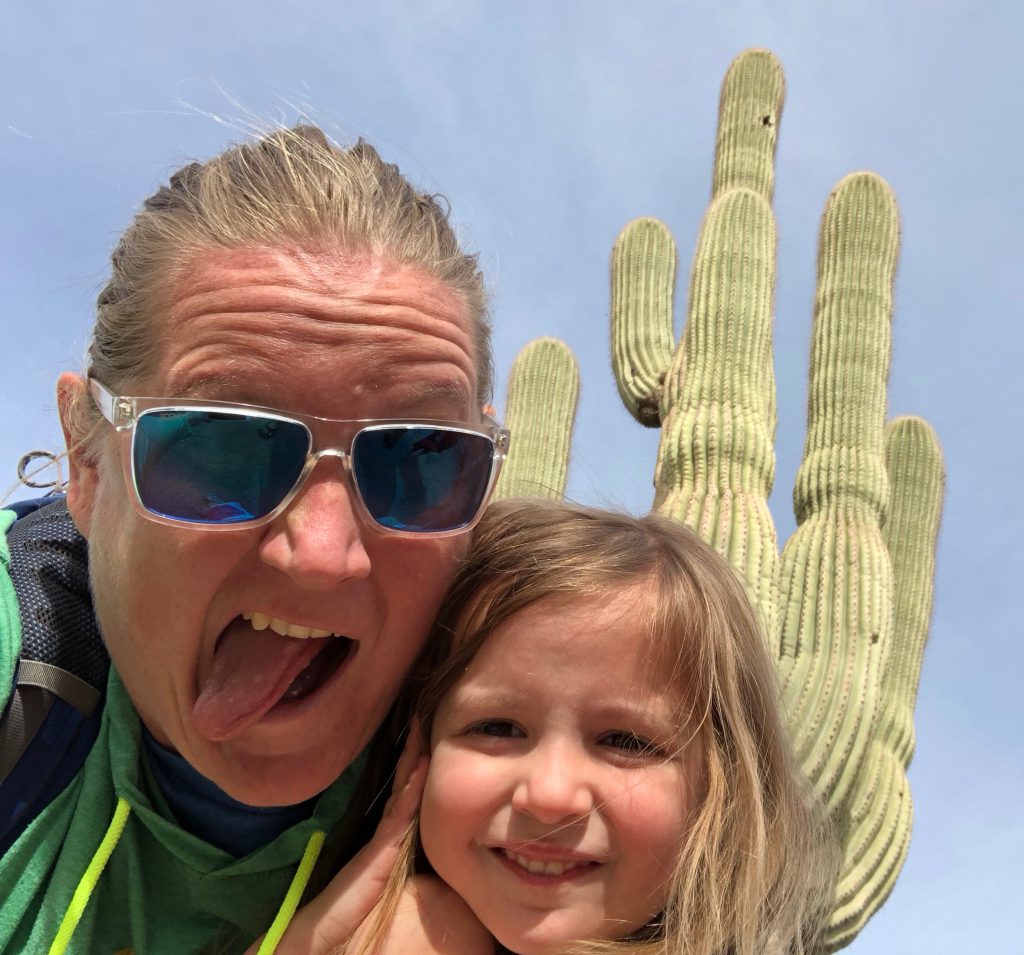 then, like always, we hit up the gift shop and spent waaaay too much money commemorating our visit.
we were pretty pleased with our visit. the lidkids all seem to prefer cactuses over boring flowers anyday. and it was a good introduction to the desert landscape we would be spending the next few week exploring….