way back when we were making our way up the coast, we had plans to go to crater lake national park, but we canceled them at literally the last minute, because of wildfires and smoke and the worry that it would be a pretty big letdown. then, when we were making plans to get back to the southwest (and warmth), we decided to have a pretty crazy week of travel and detours and epic stops, including another attempt at crater lake.

we arrived pretty late at night, after a long drive from mount st. helens and a few stops. but the next day, derek was off, and we were up and at ’em, ready to take on crater lake. unfortunately, the weather didn’t cooperate with our plan, and we were greeted with overcast and foggy skies. so, we did the visitor center thing. and worked on ranger books. and tried to wait it out. to no avail. there was this pretty cool rainbow, arching over a barely visible wizard island, though. 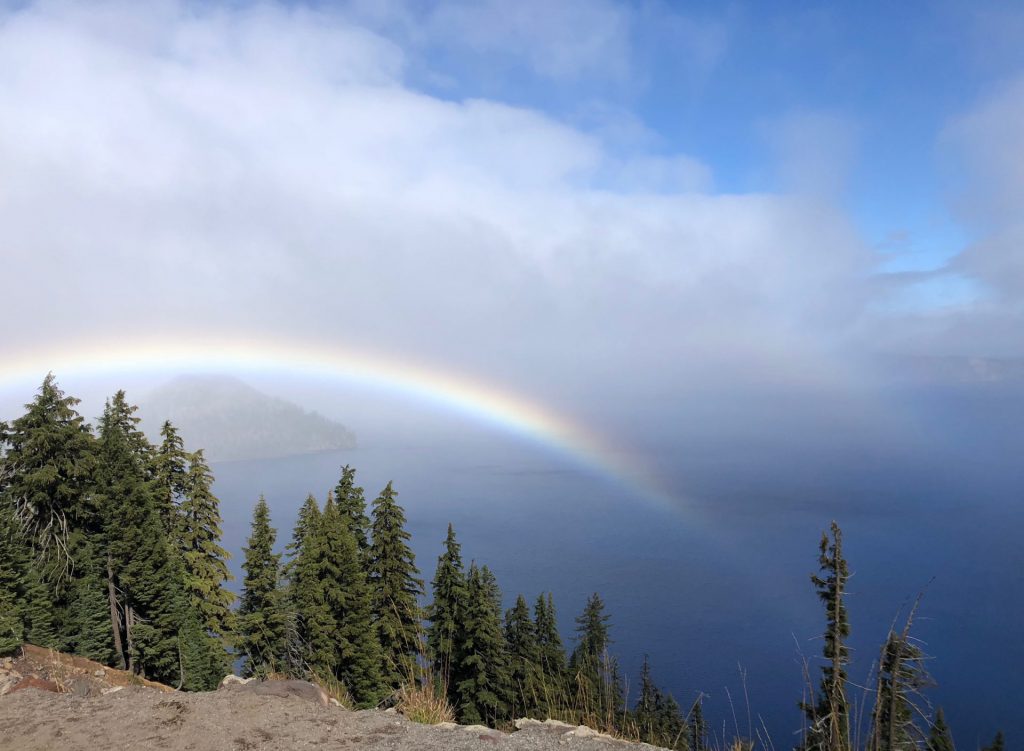 we took a drive around the rim of the caldera, thinking that maybe we would do the hike down to the water, but it was actually raining at the trailhead. and it was really cold. so, we skipped it and kept going. we did reach one overlook, where we at least got a glimpse of the ultra blue (appearing) waters of the lake. 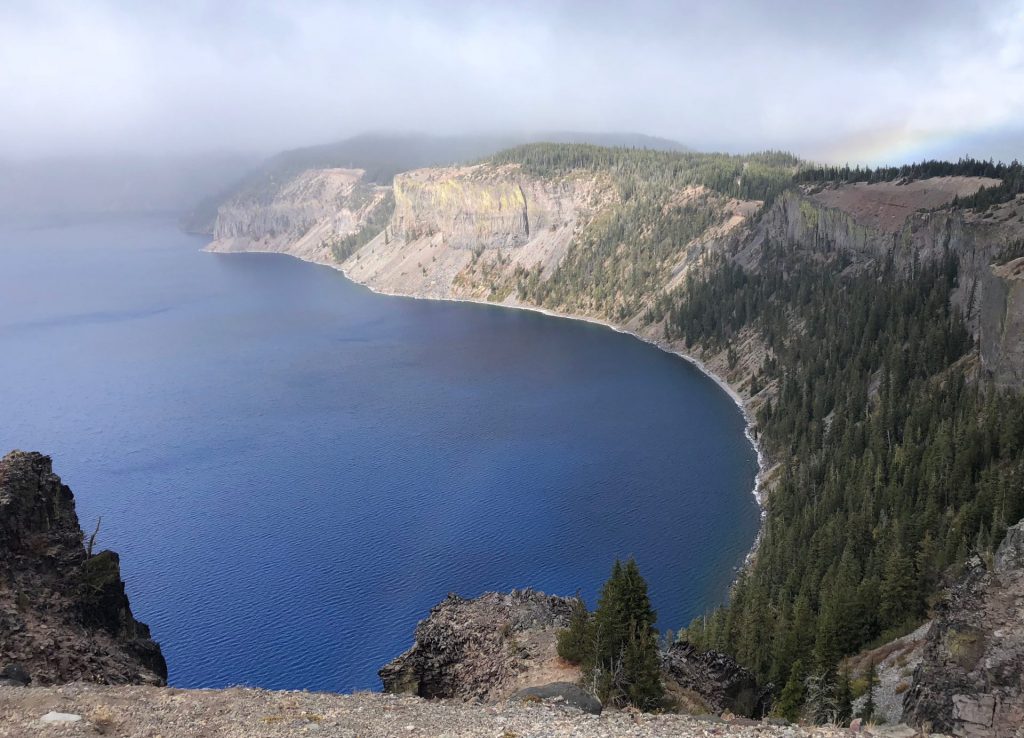 we also pulled over to take a quick look at “phantom ship”, a rock formation that sticks up out of the water, giving a slight appearance of a ghost pirate ship, or whatever. 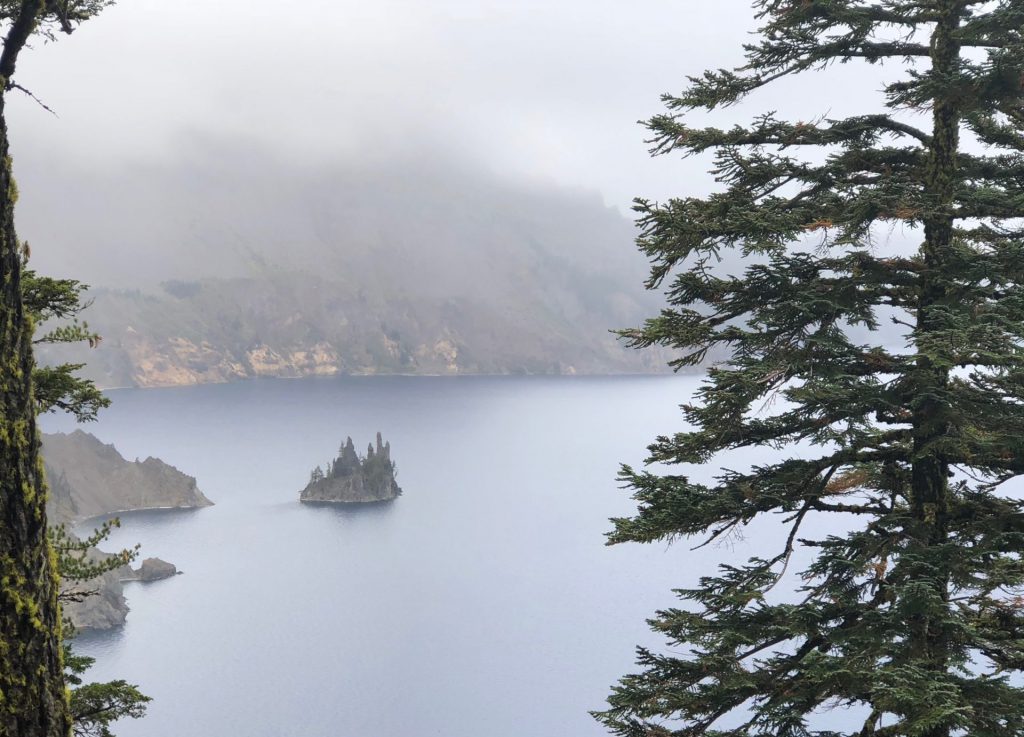 as we drove, the kiddos finished up their ranger books, and on the way out, we did the official junior ranger business, just in case we didn’t make it back to the park. 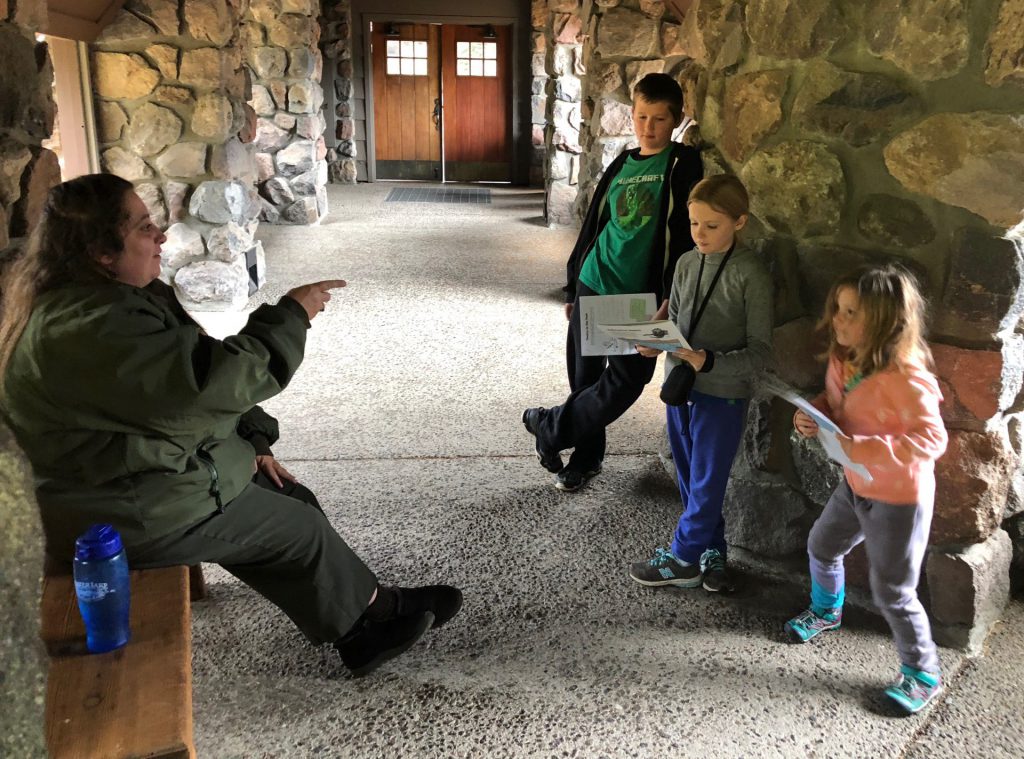 the next day, we did some school. hung around the site. and watched the weather intently. we also reloaded the crater lake webcam obsessively, and when derek finished work at 2, we loaded up and raced back into the park, hoping to get a better look this time, and we were not disappointed. 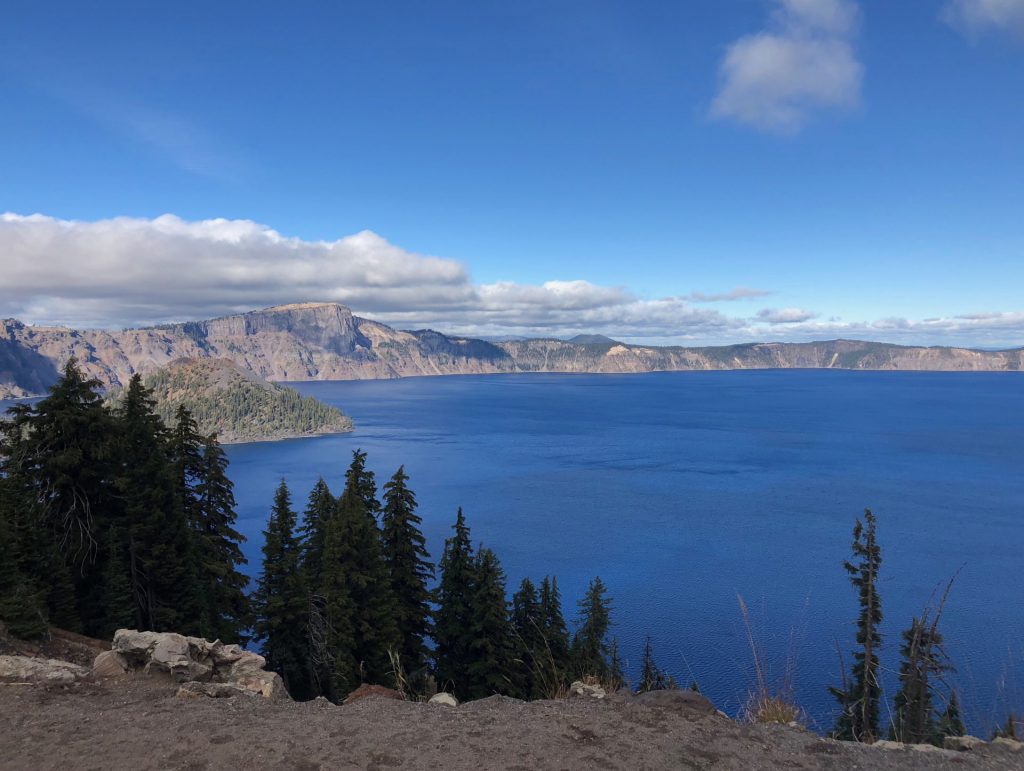 our resident photographer in training got right to work. 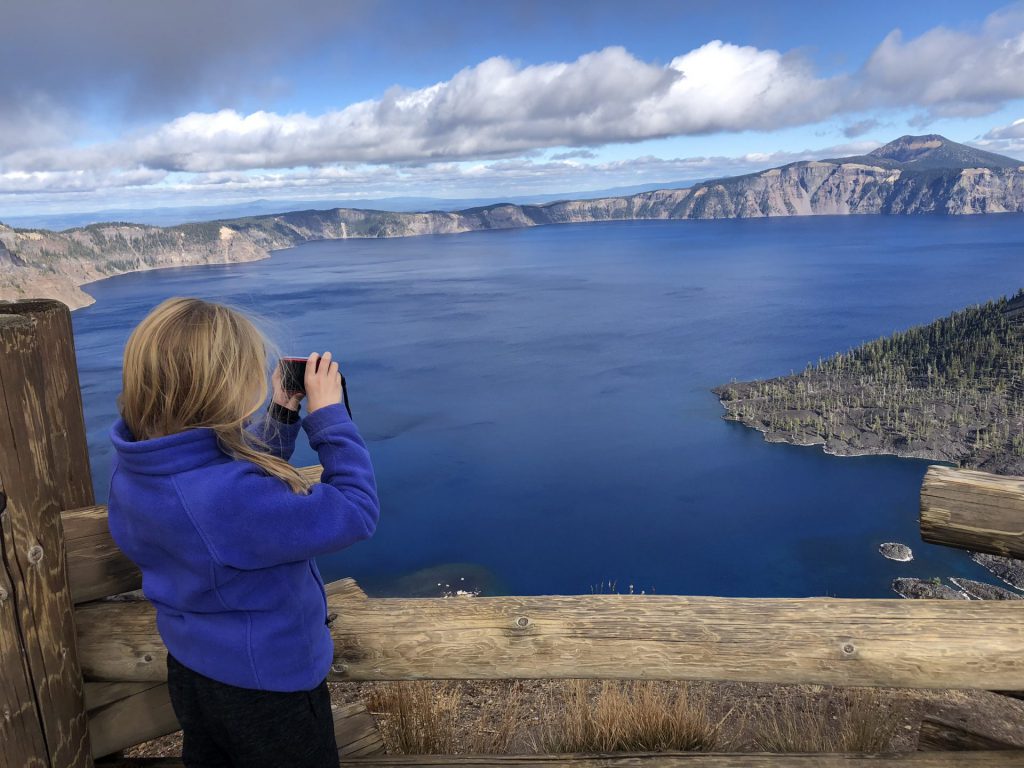 so. a quick bit about crater lake… it was formed when 7,700 years ago, mount mazama erupted and then collapsed into itself. the giant crater then began to fill (over an estimated 700 or so years) with melted snow and rain water, creating one of the purest and clearest lakes in the world. it’s also the deepest in the united states, at 1,949 ft. the blue color is owed to the absorption of all of other colors of light rays, in the deep, clear waters, with only the blue left to bounce around and back out. 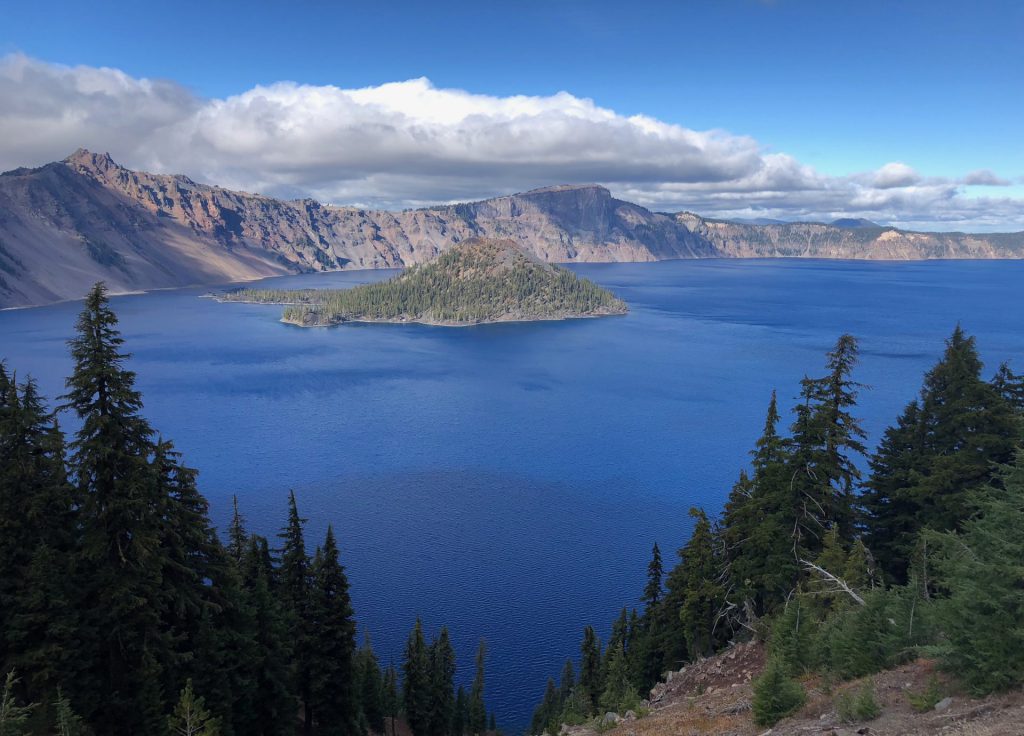 and now. some family photos. kids only. 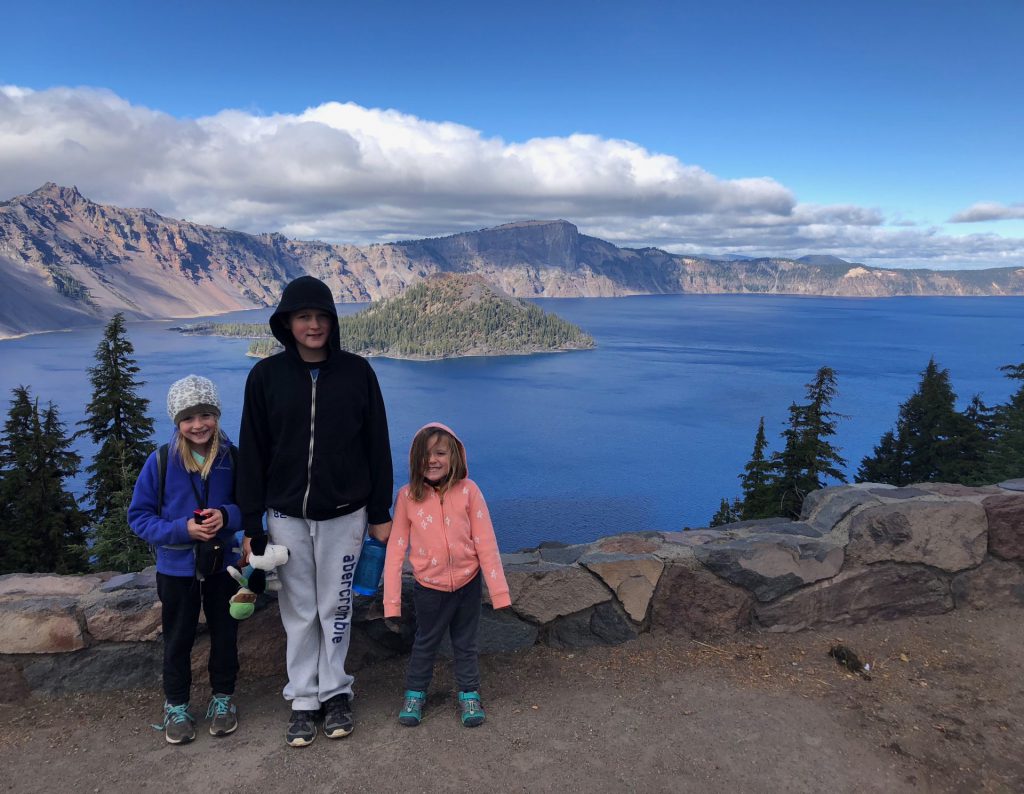 mom and kids and goofy faces. 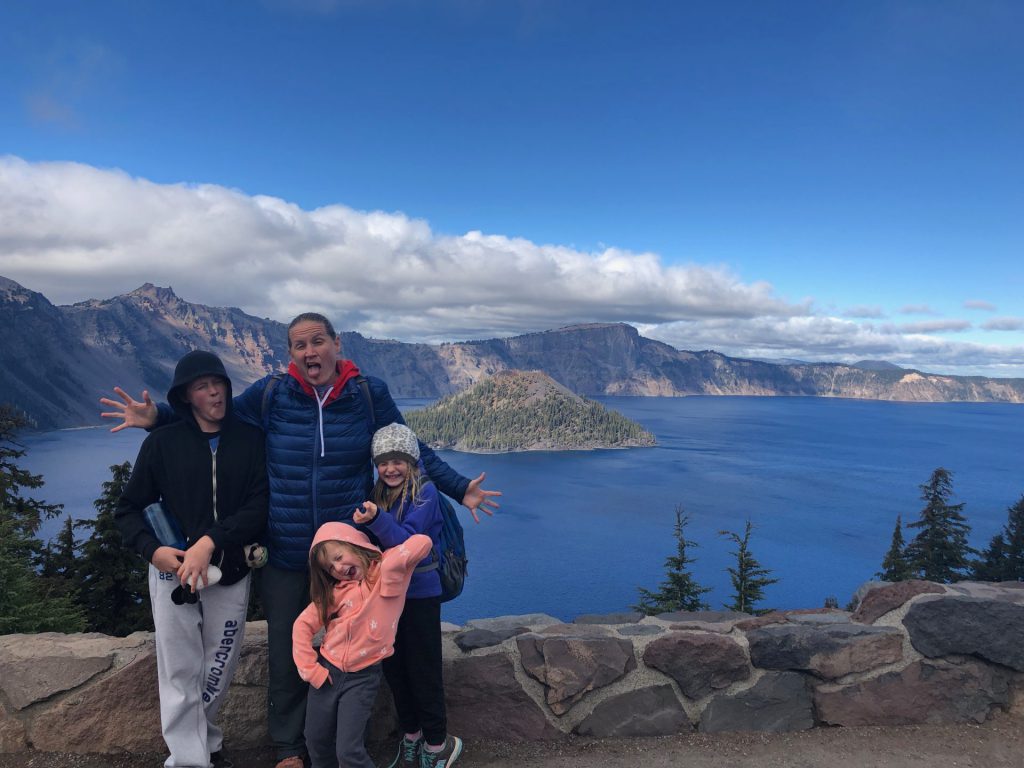 and. all of us. normal faces. 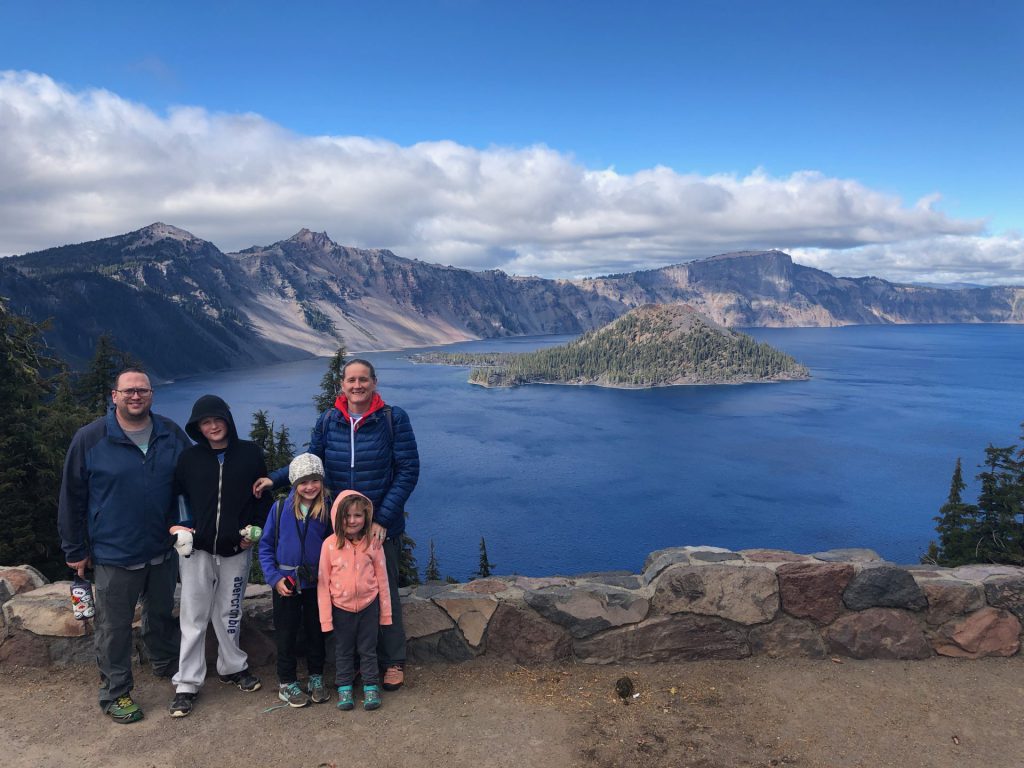 we walked along the rim trail for just a bit, trying to get the best view. 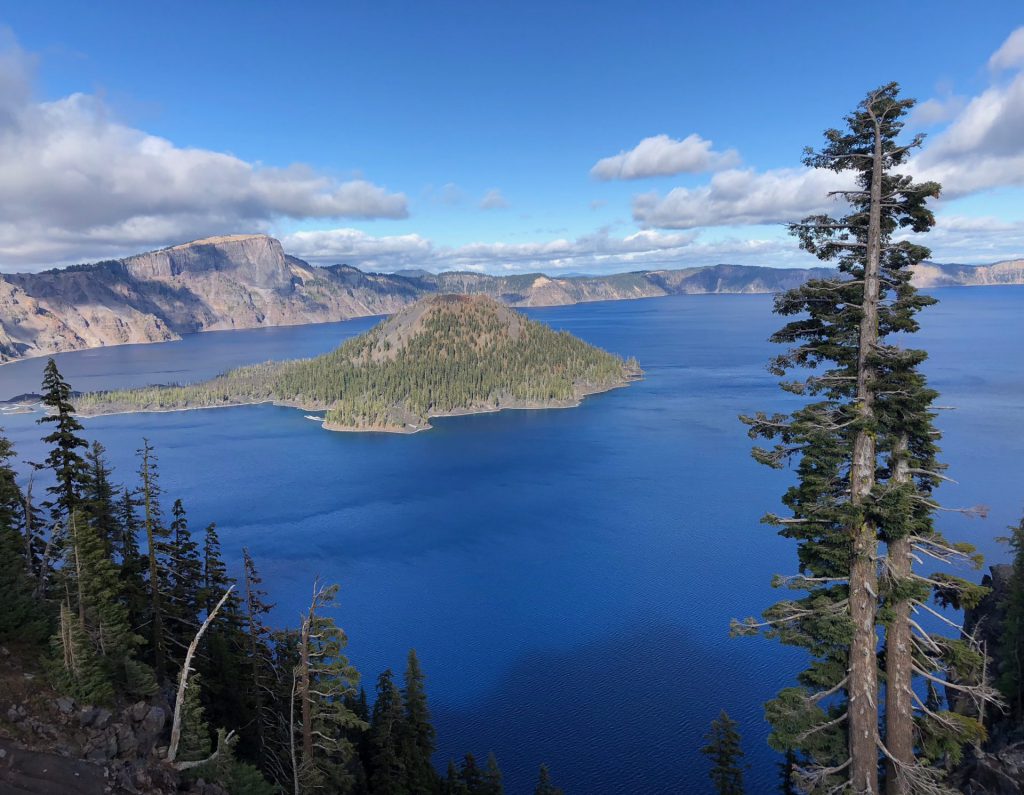 then we made the executive decision to drive over to the watchman overlook, just to see what things looked like from there. its the closest view of wizard island, which is actually a new volcano, growing up out of the bottom of the crater. 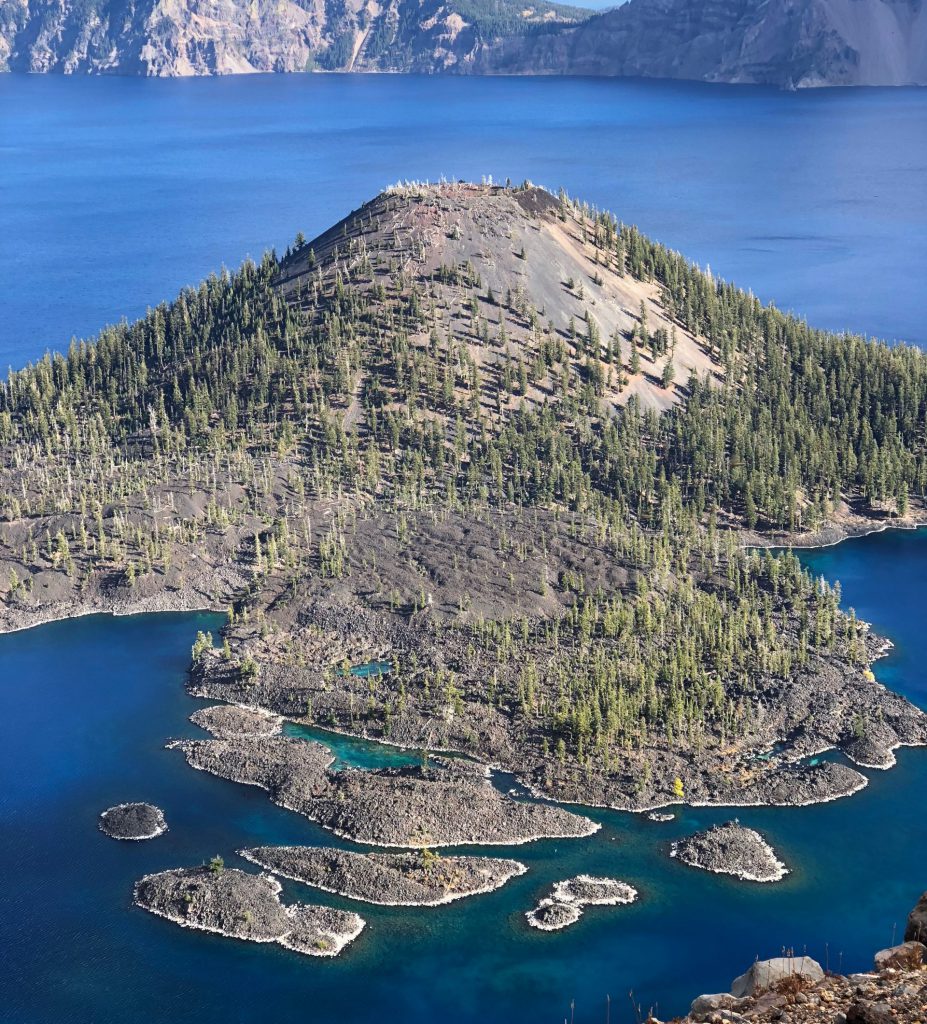 we had promised the kids that all we were going to do was go to overlooks and take pics. that there would be no hiking. but, when we looked up the hike to the watchman fire tower from the parking lot and it was only 1.6 miles and 400 feet elevation change, we bribed all tiny parties and off we went. 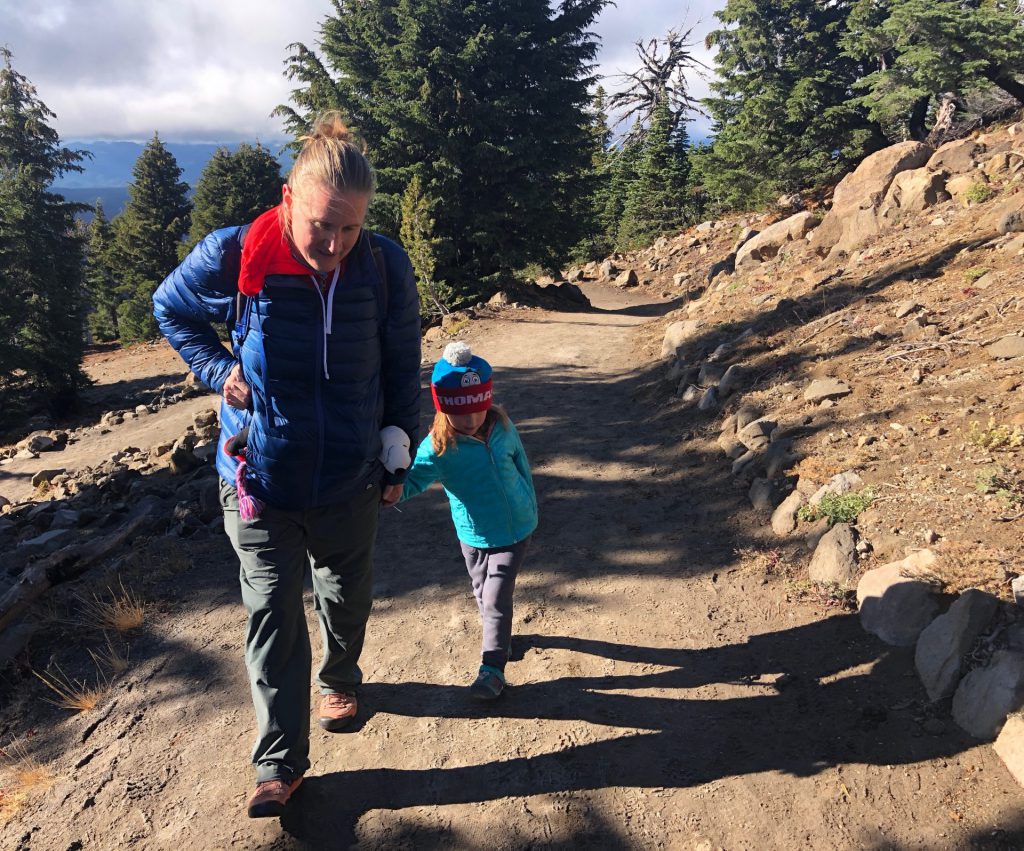 it was pretty cold and not all the beautiful on the way up. and it was a lot of switchbacks. but, the reward at the top was a pretty amazing view of the lake. 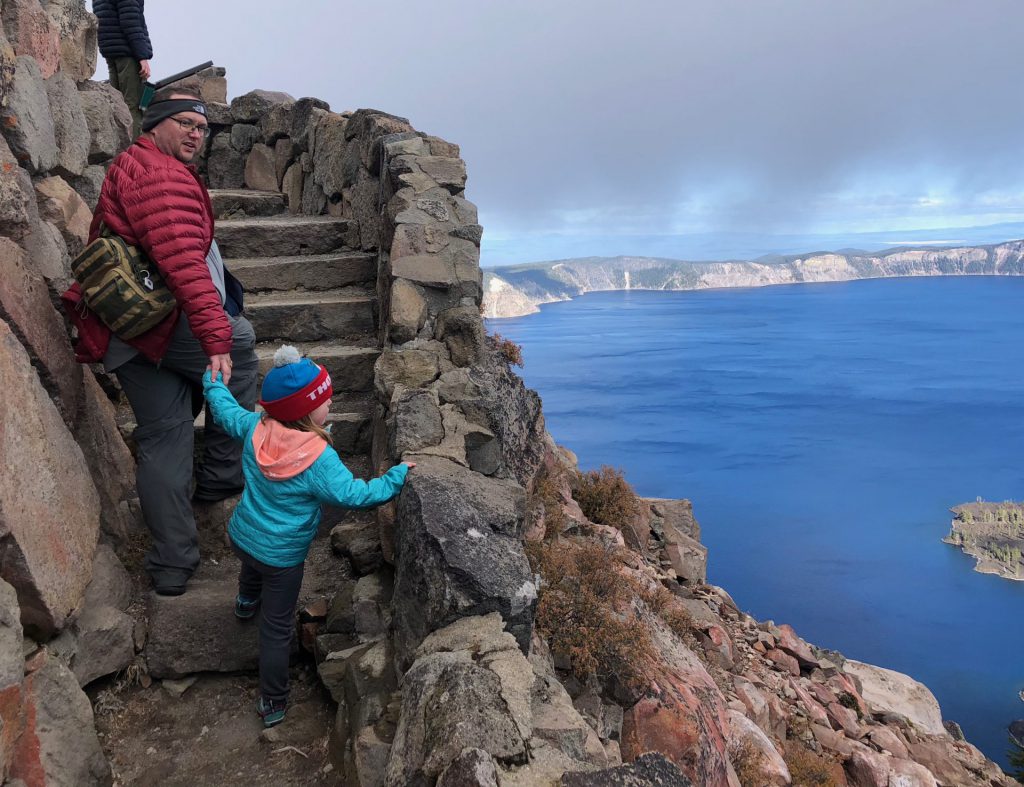 we attempted a family photo, but the sun was in everyone’s eyes, so this was as good as it would get. 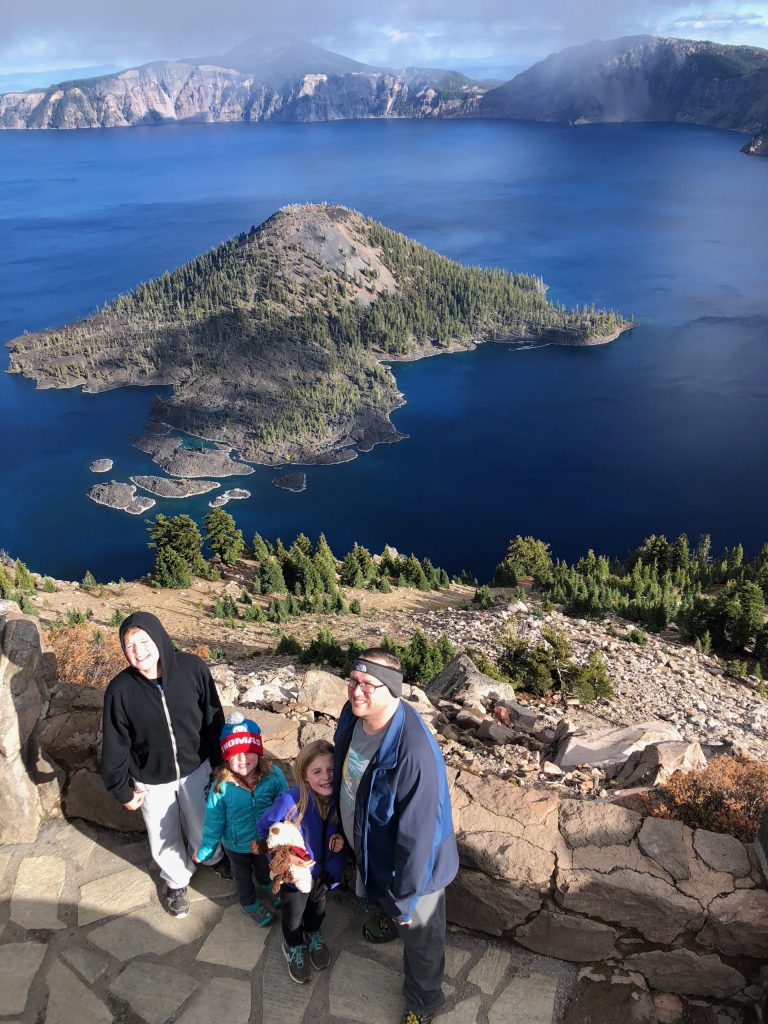 i’m so thankful that we made the trip back up and that the kids agreed to hike to the fire tower, because the lake was stunning. 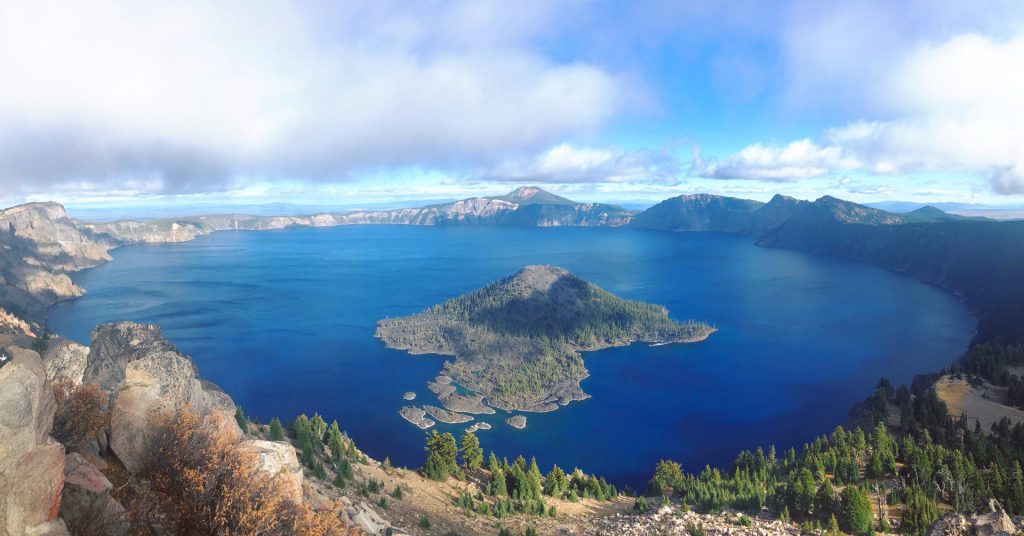 see how happy i am? 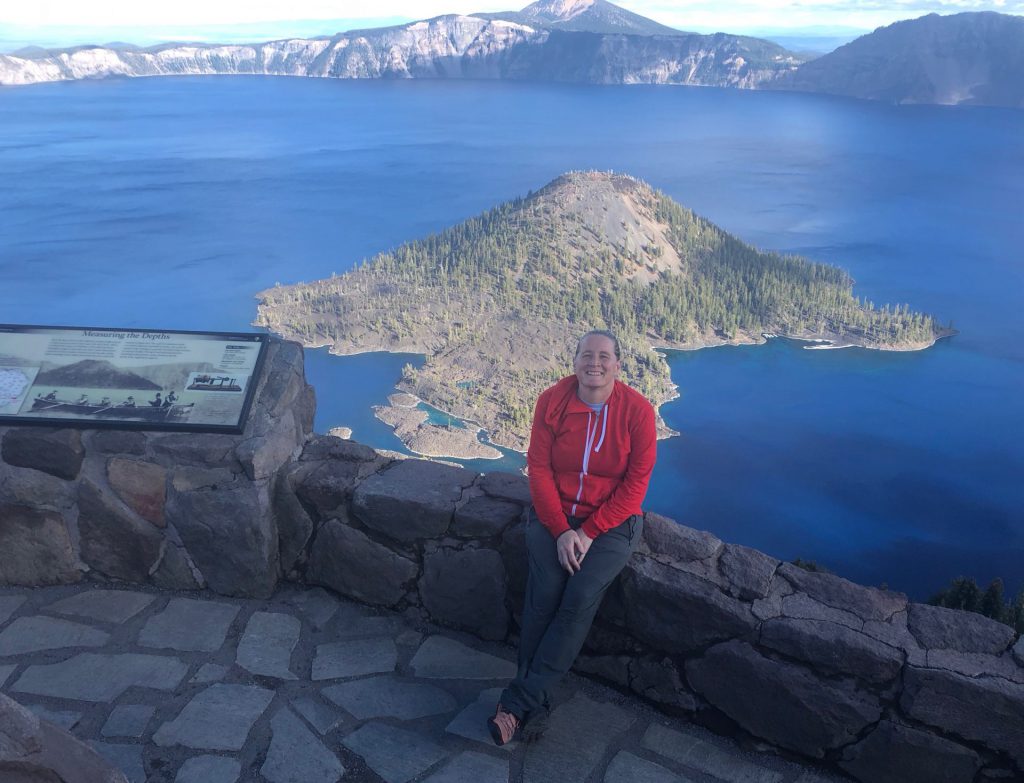 and one last parting shot of the crazelnut. 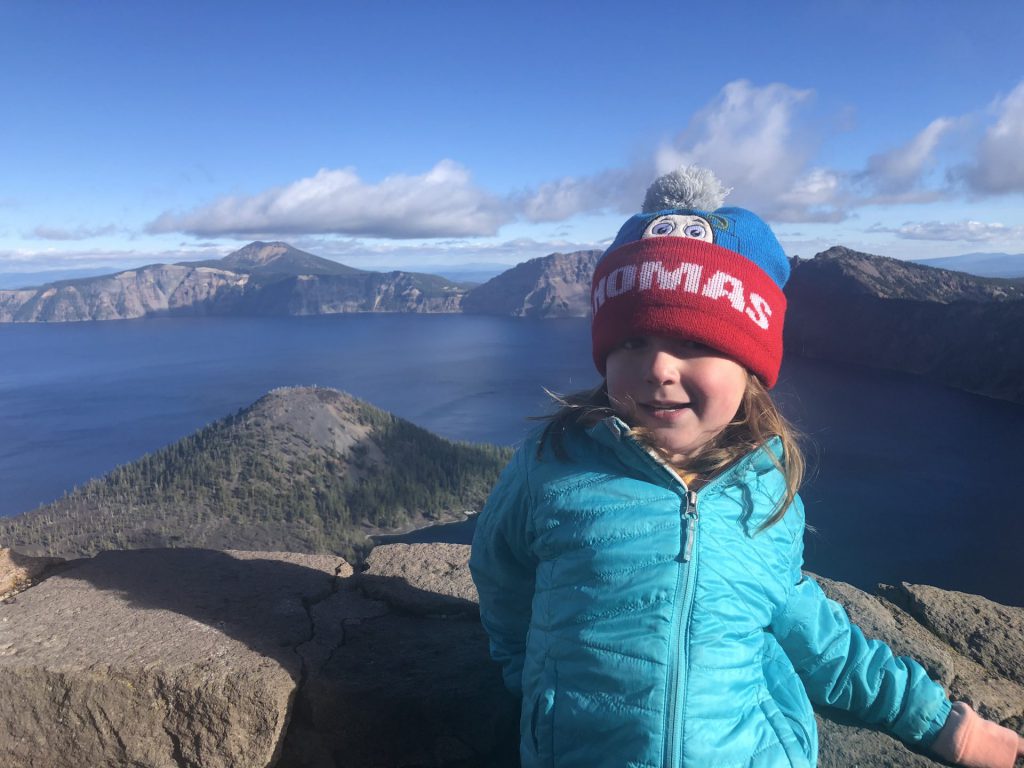 so, our crater lake visit was redeemed. the day before, when it was rainy and overcast, i was pretty bummed. now i felt like it could be sufficiently checked off our national park list. oh. and. this was our 30th national park. out of 60 total. so we are halfway done. but i’m not sure those hawaii and alaska national parks will be checked off anytime soon. 🙂