on friday, derek had to actually work for his actual employer, so i had to find an activity i could handle on my own with the lidkids. we decided that i would leave hazel (to watch movies, play ipad, and generally continue to recover a bit from being sick) and take the older lidkids to the hot springs. it wasn’t too far of a drive and it’s more of a leisurely stroll than a hike. 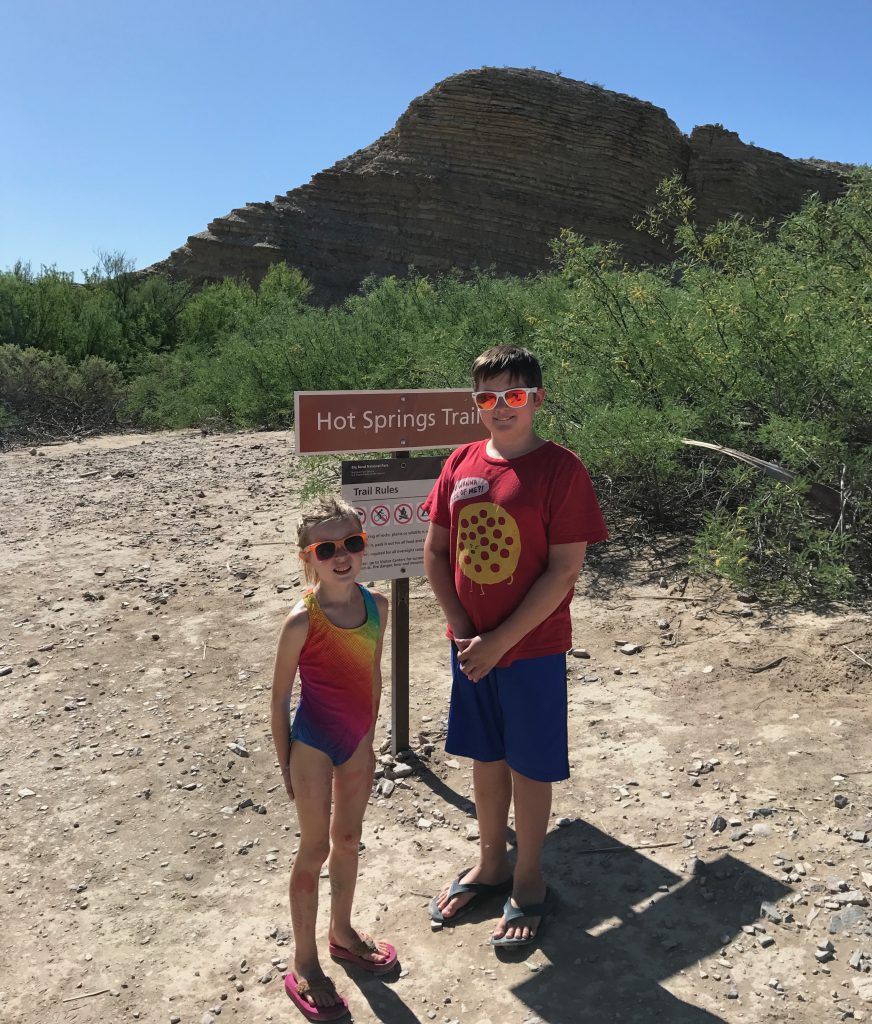 the hot springs are part of another little community that used to live in the big bend region. there are old buildings that used to be stores and hotels. the dates that they “closed” are suspiciously around the same time that big bend became a national park. 🙁 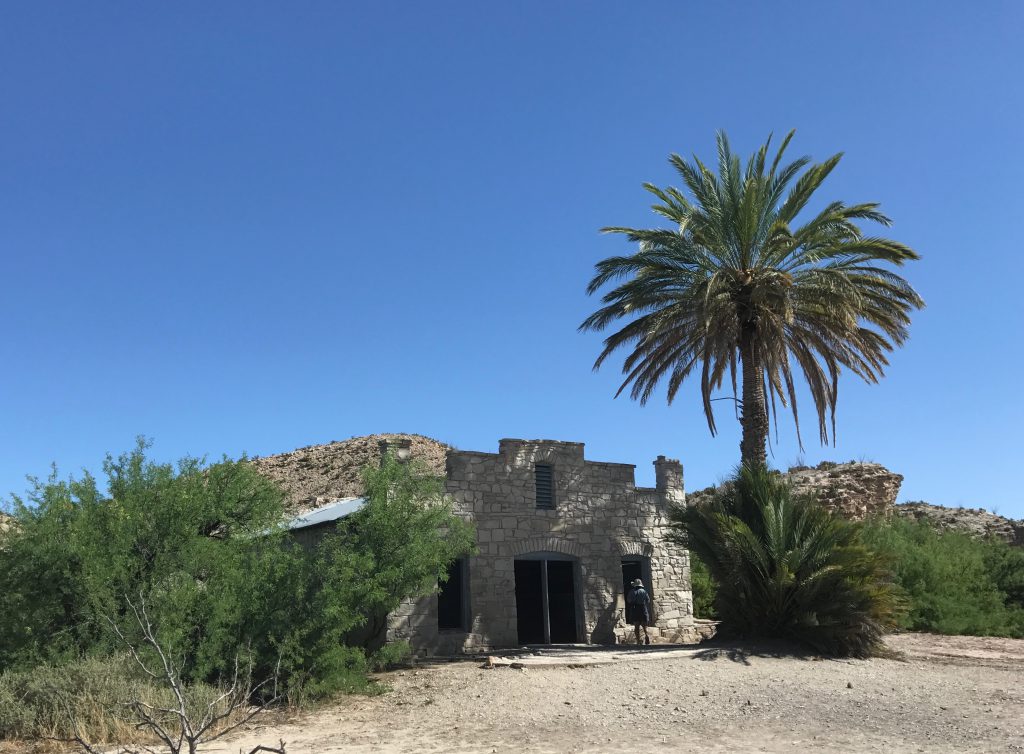 the stroll was less than 1/4 mile and nice and flat and smooth. 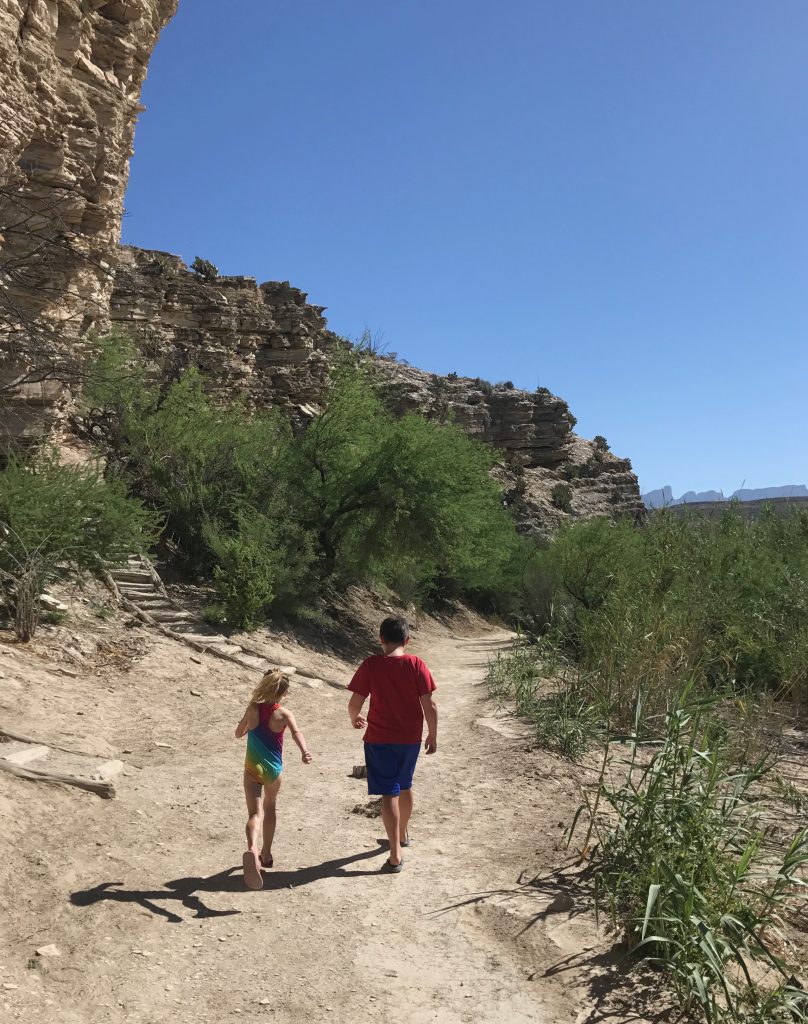 when we got there, the place was packed. a rio grande guided canoe trip had stopped off for a bit of a soak, so they had filled up the place. the water was scorching. anna didn’t mind. 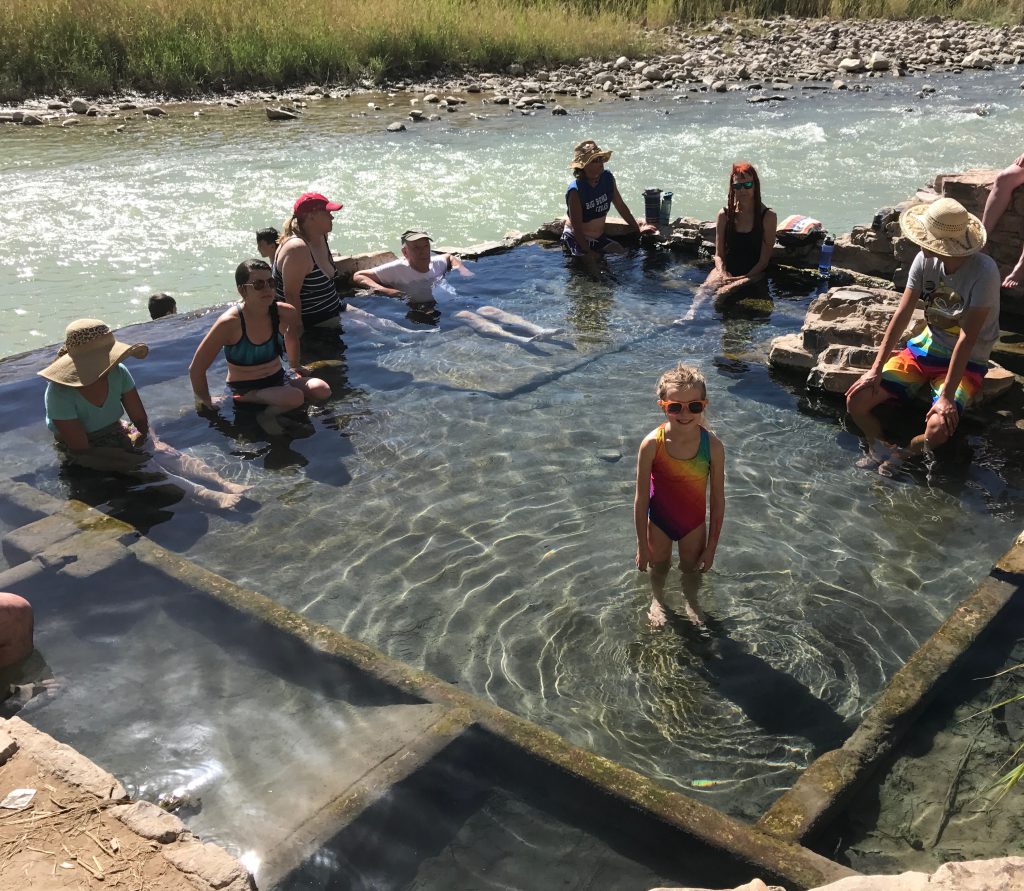 isaac was less sure. 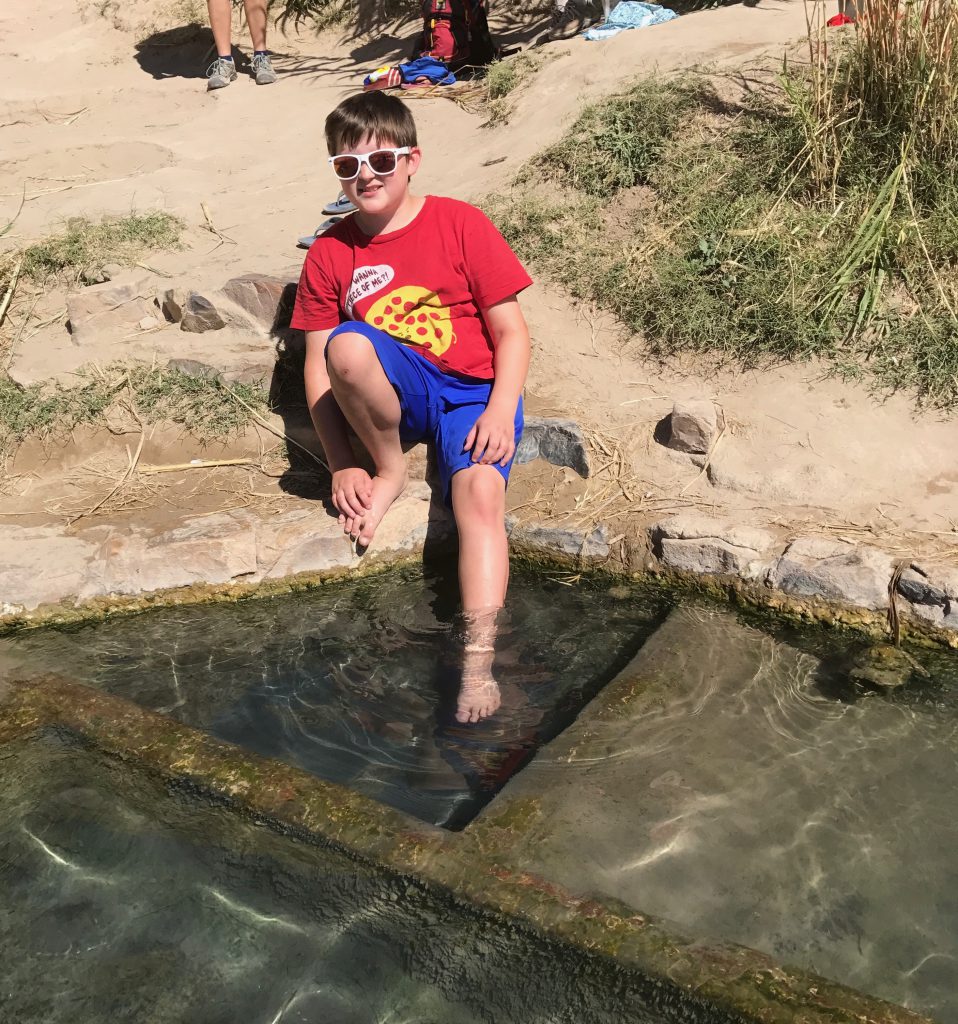 anna was right at home in the warm, knee deep water. 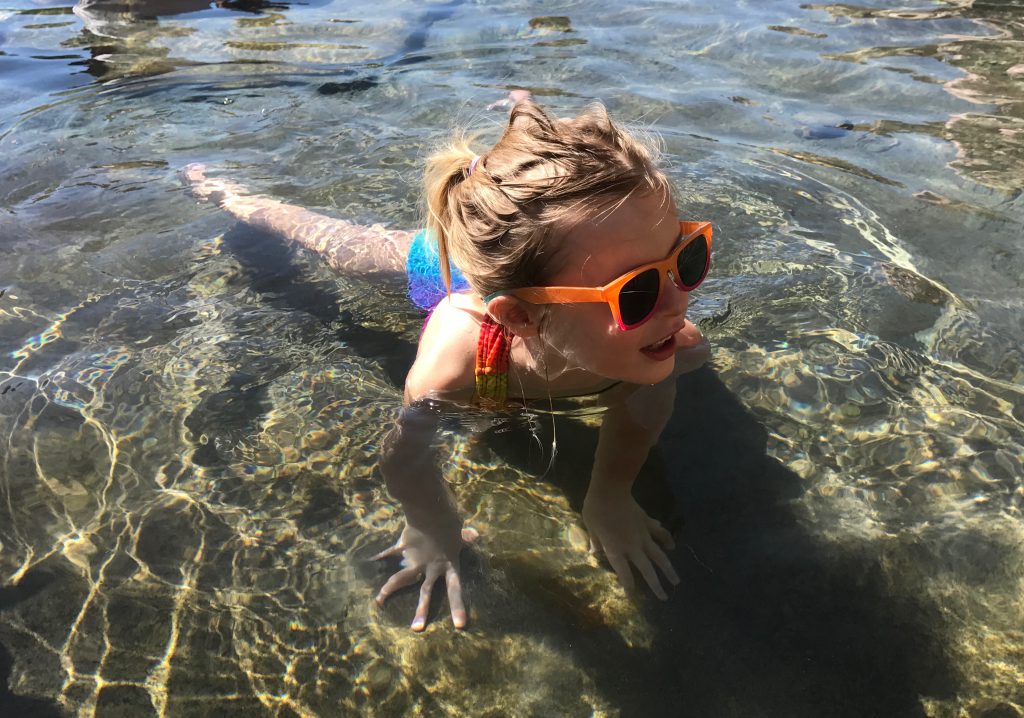 sitting on the ledge that the water flows over into the rio grande. 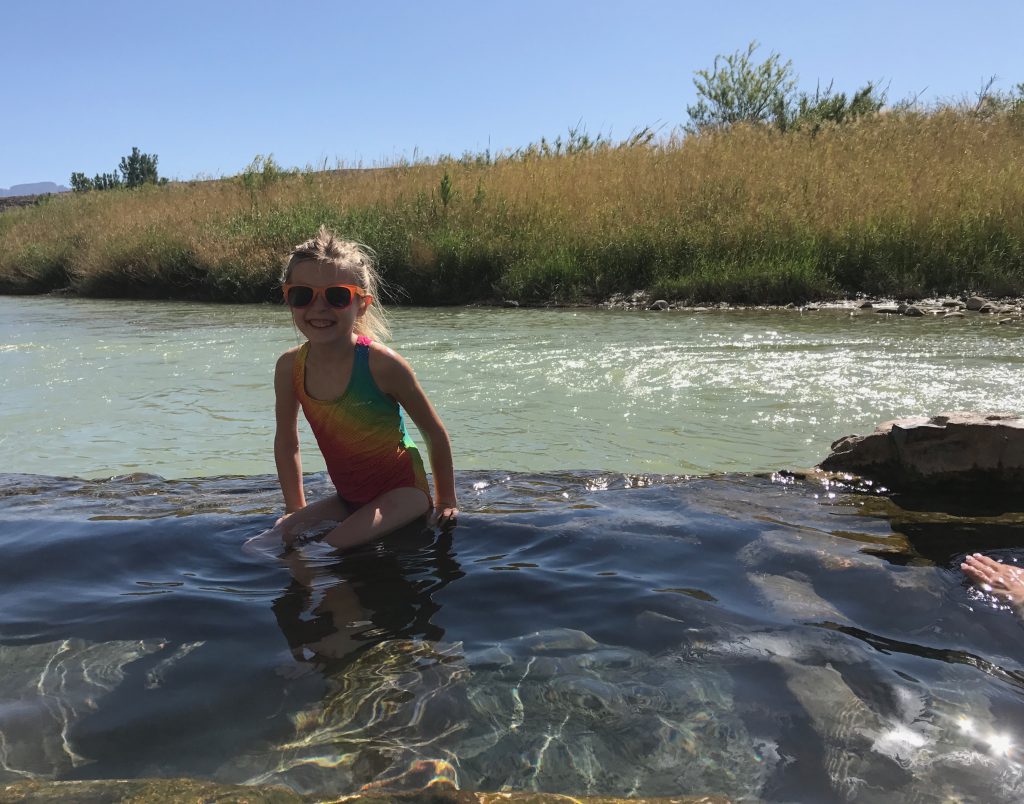 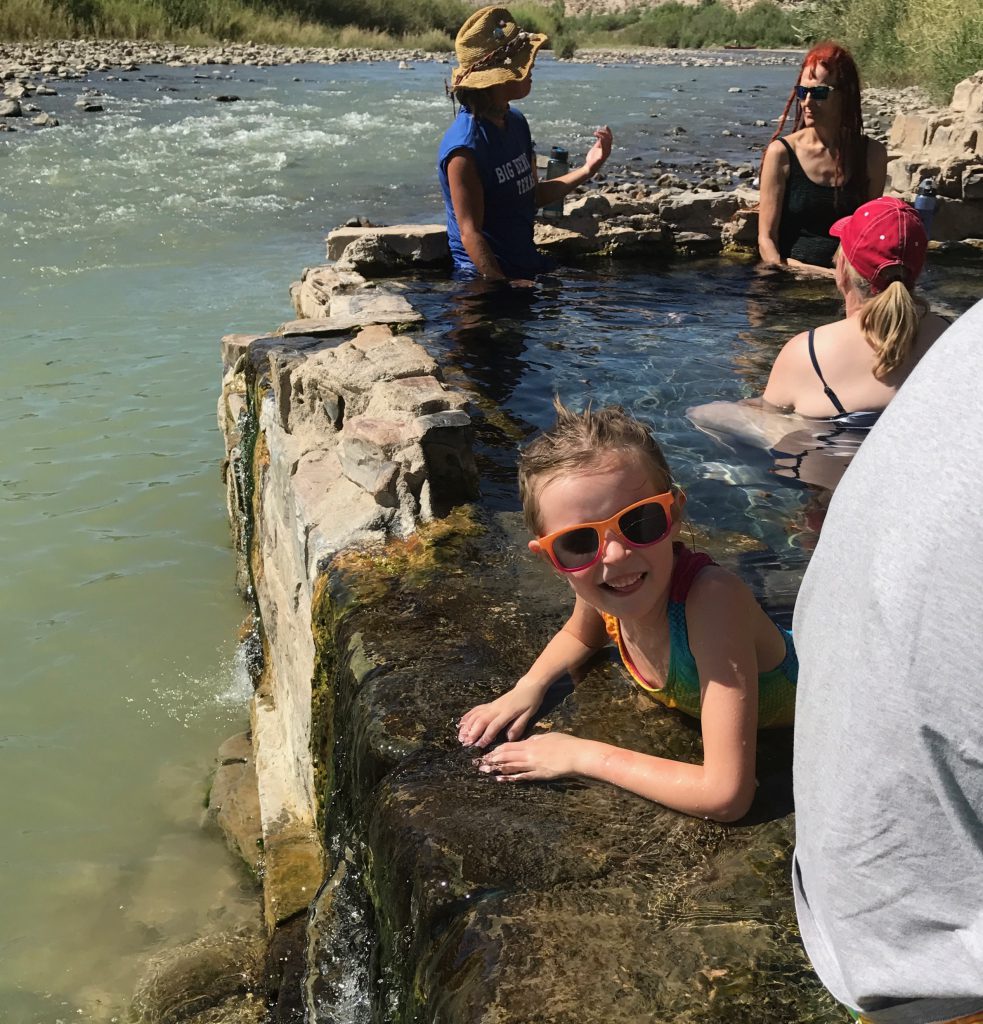 the boy humored me for a pic. 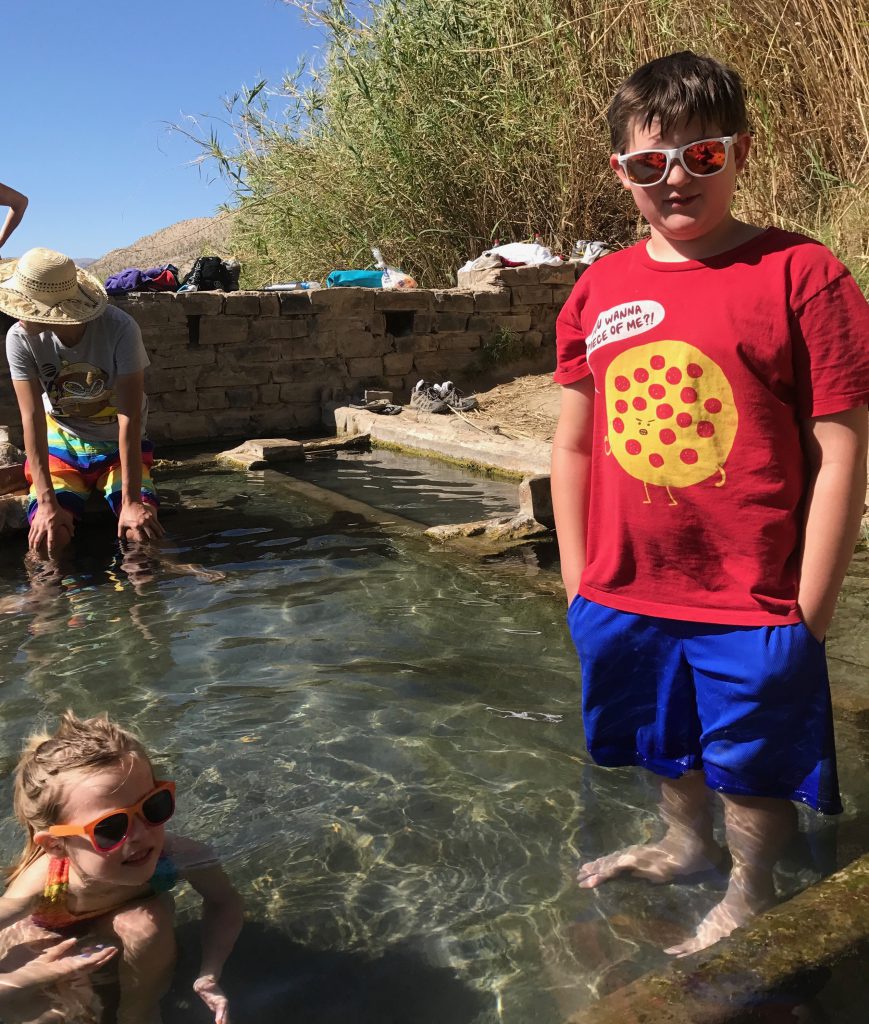 but he was more interested in the colder rapids of the river. 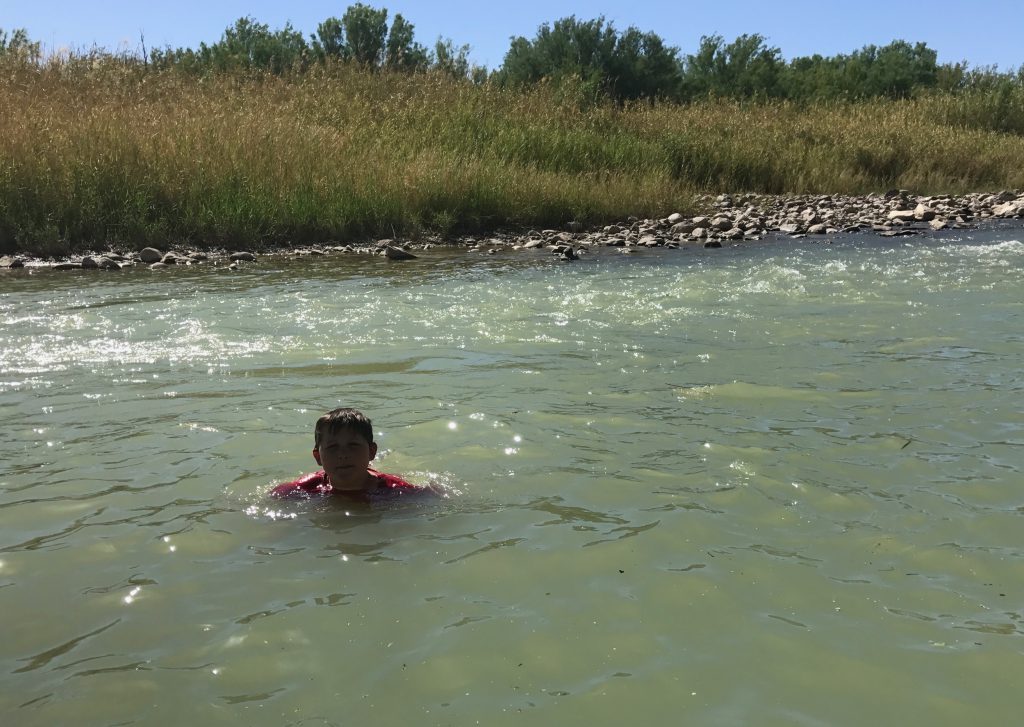 the rapids current ran through the middle of the river. the sides were relatively still. so he would wade up to the top of the rapids, jump over into them and then coast down through the river to the end. 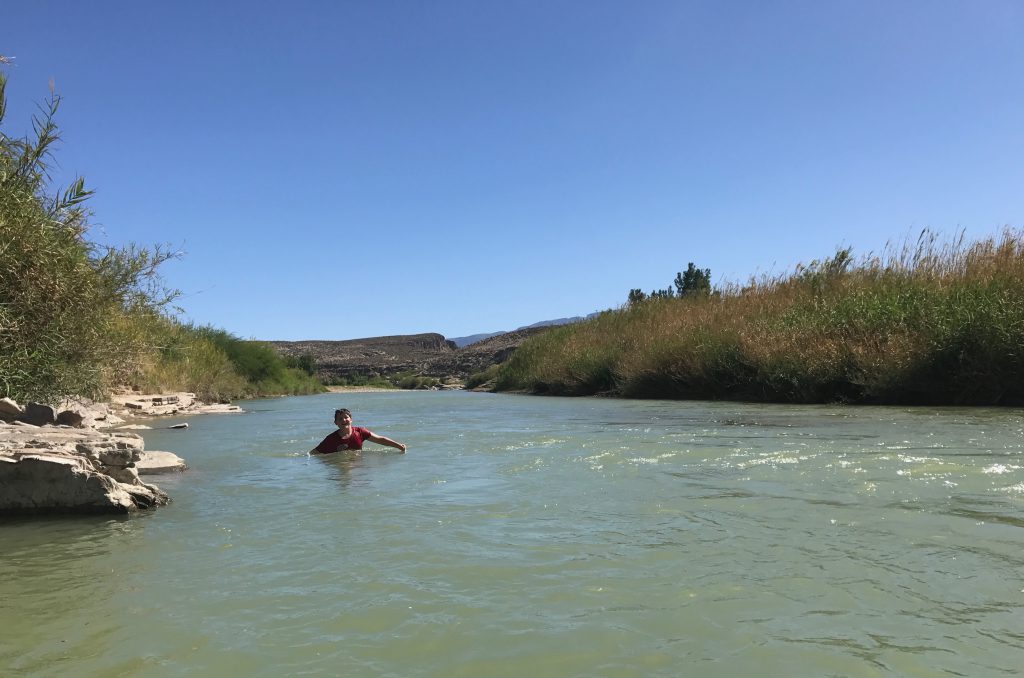 he was in heaven. 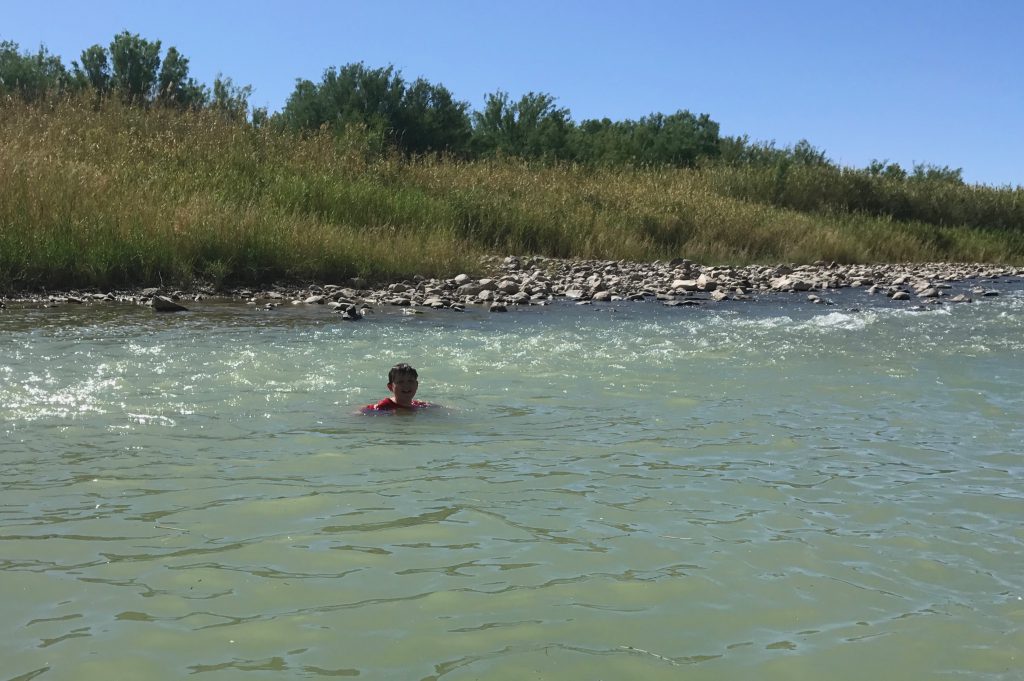 anna eventually agreed to test out the cooler waters of the rio grande. it was a bit tricky getting over the wall of the side of the springs into the river, but we became old pros in no time. 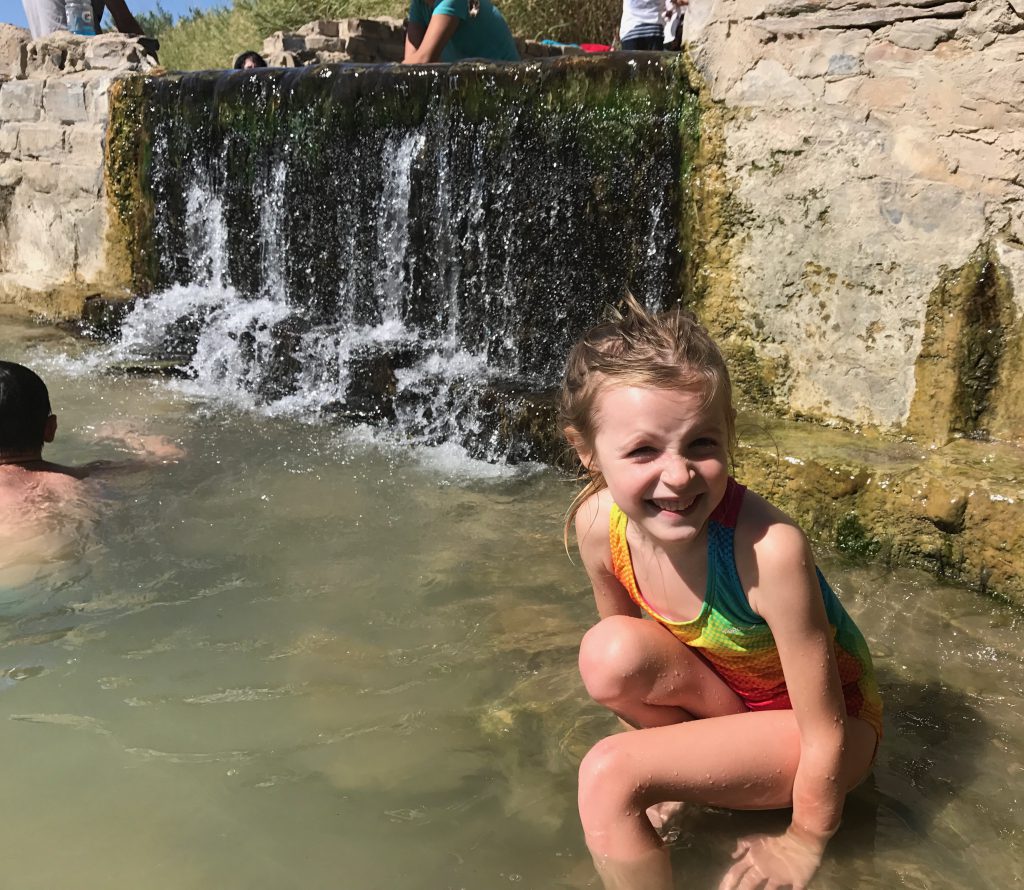 i carefully waded out with my iphone into international waters to get this shot. 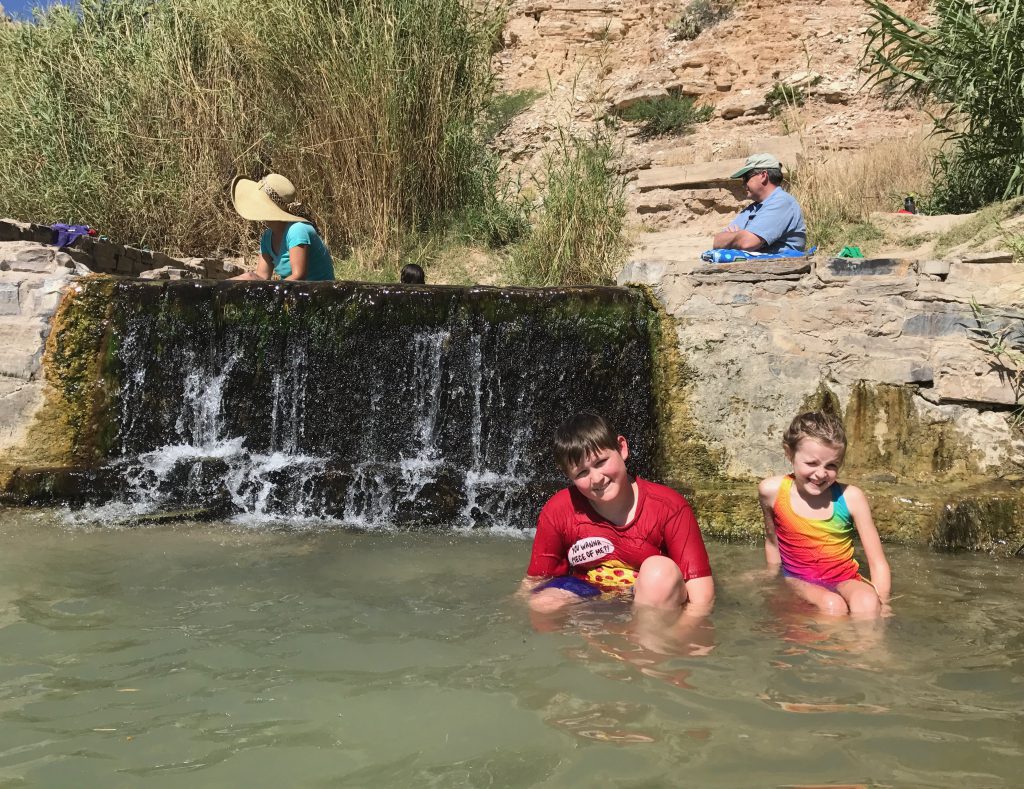 once again, isaac crossed over to mexico. just because. 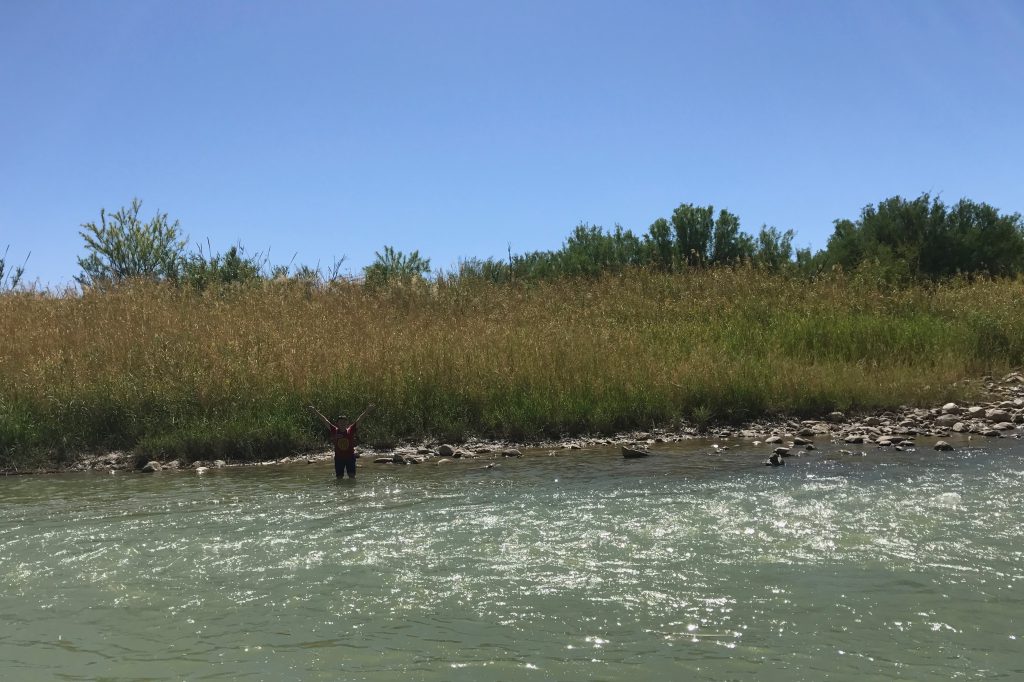 while he mostly played in the river, anna was in and out. hot springs, river, hot springs river. when everyone eventually cleared out, i tried to get a few shots with the hot springs to ourselves. 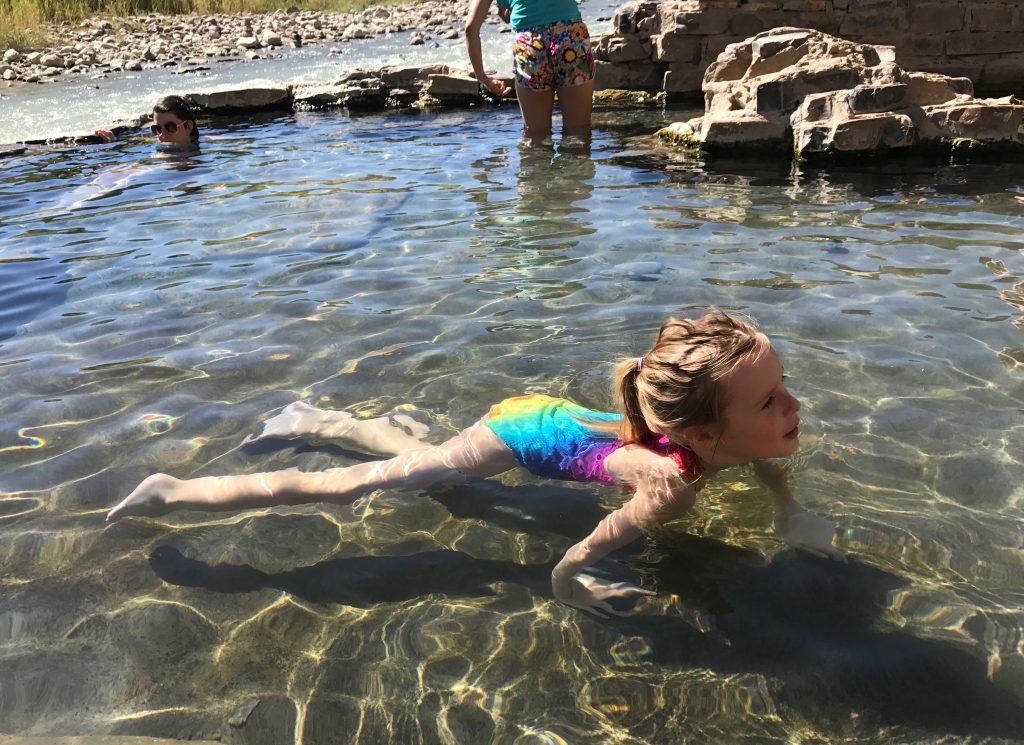 there were some mexican dudes walking along the bank on the other side, lifting up rocks and making their way towards us. i’m very curious what that was all about. but look how cute anna is. 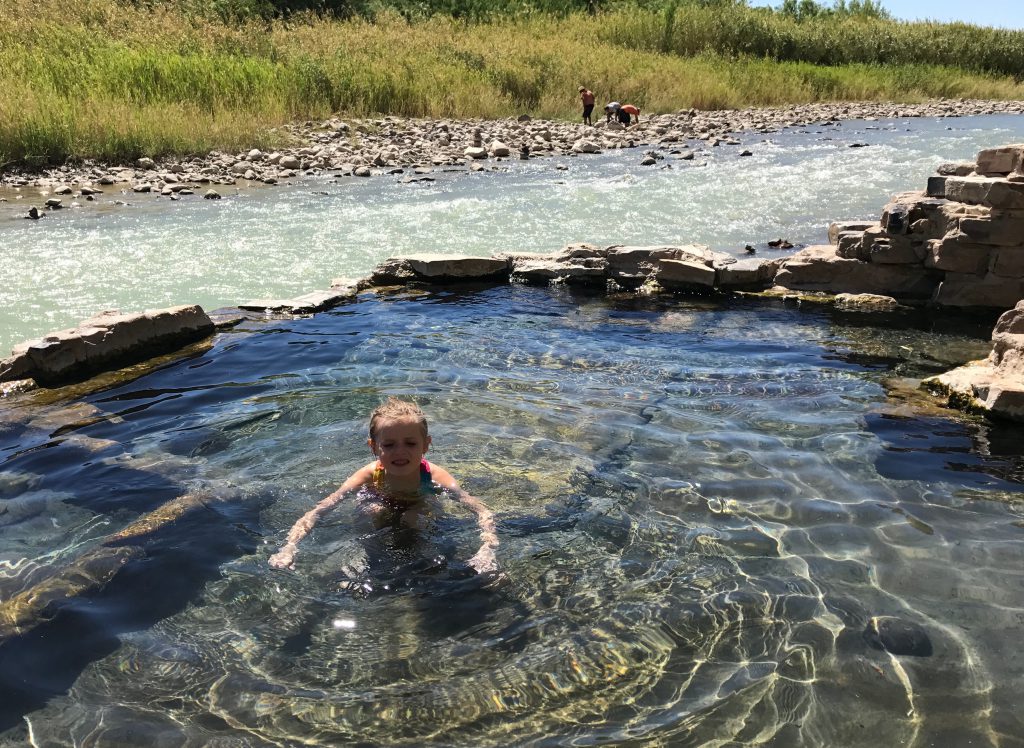 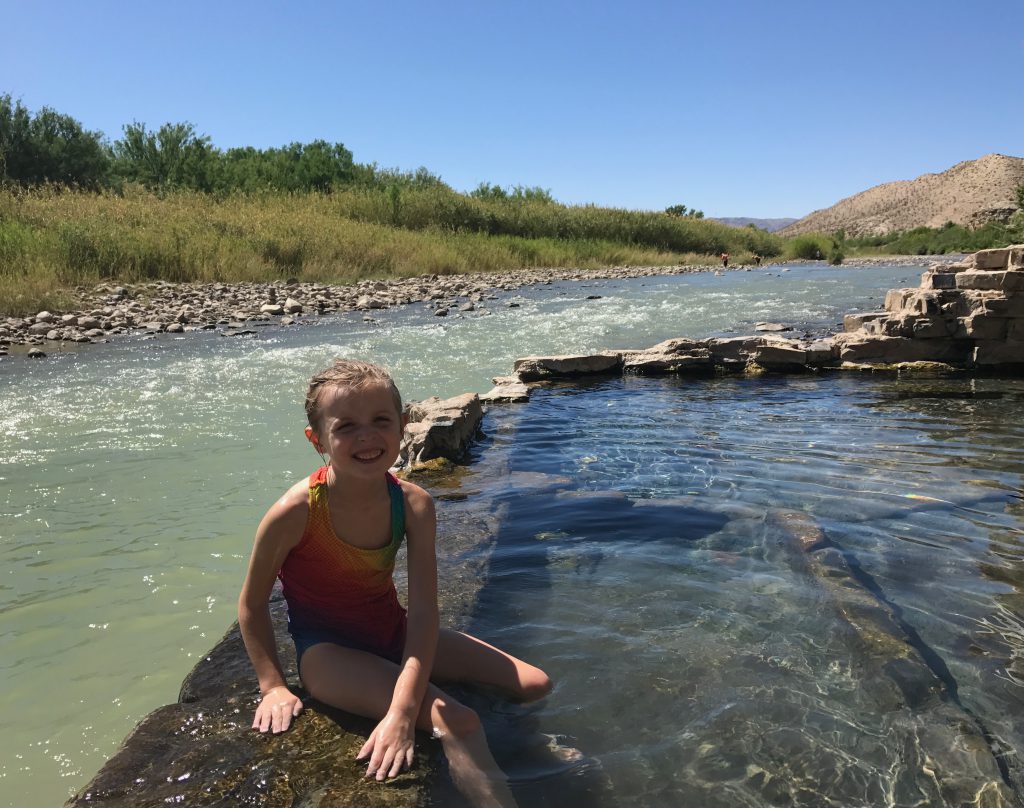 isaac finally got cold enough to join us. 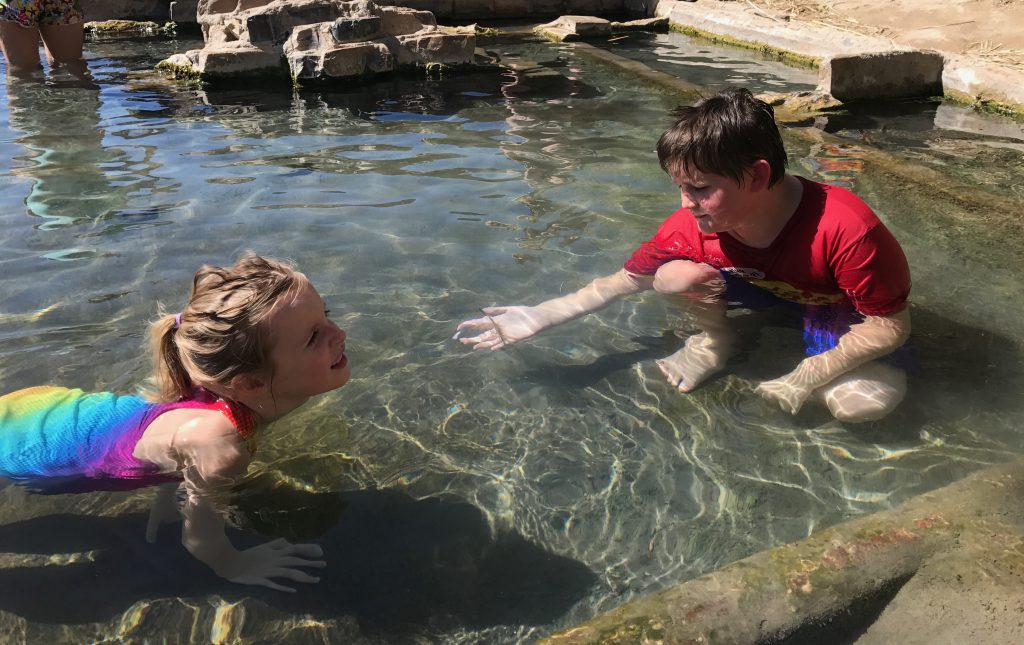 but it was short lived. soon he was dressed and ready to go. 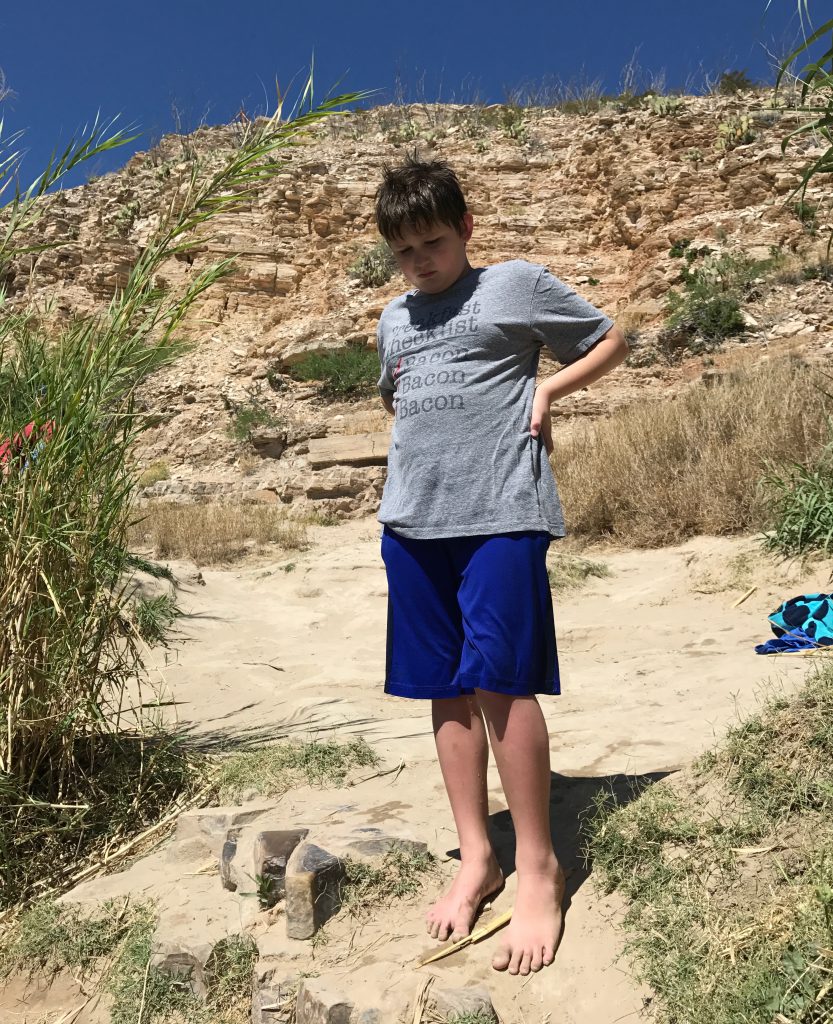 and when isaac is ready to go, he makes sure everyone knows it. and it was getting hot and anna’s fingers were turning into raisins. so, we called it a day…

on the way out, we stopped to check out some ancient pictographs in some rocks near the springs. 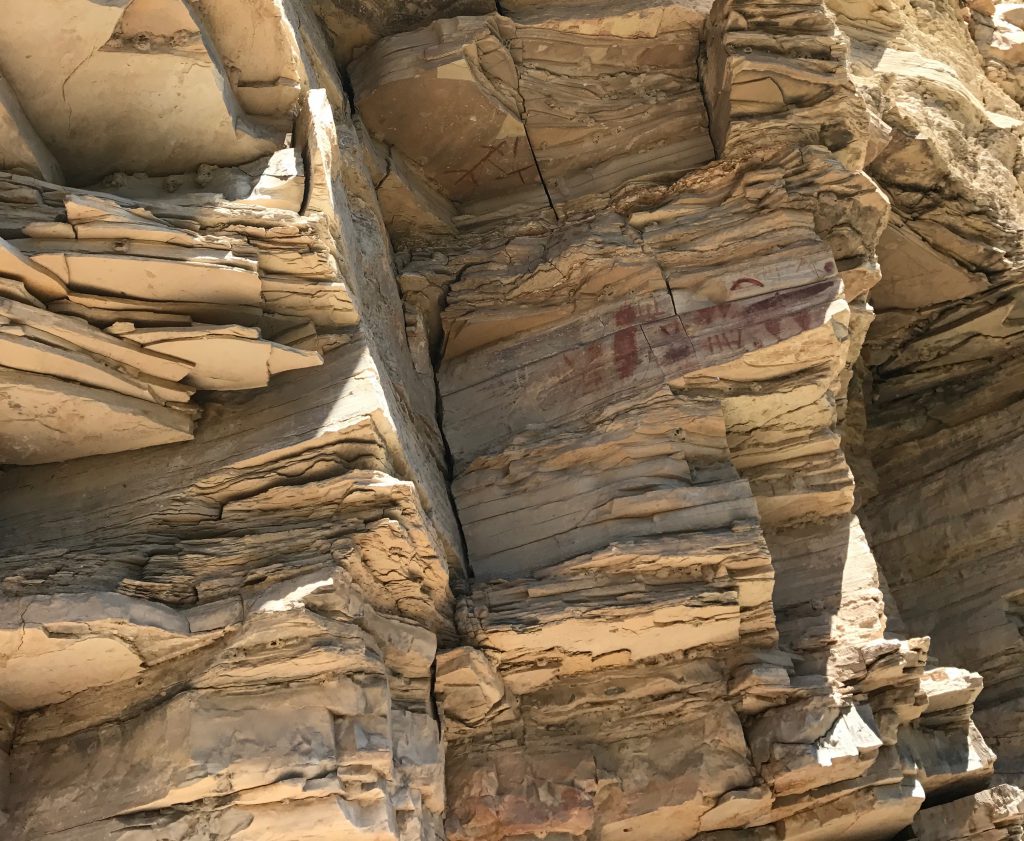 there was another little craft kiosk set up in the picnic area near the hot springs. i didn’t have any money, or else i would have totally snagged one of the cool scorpions. 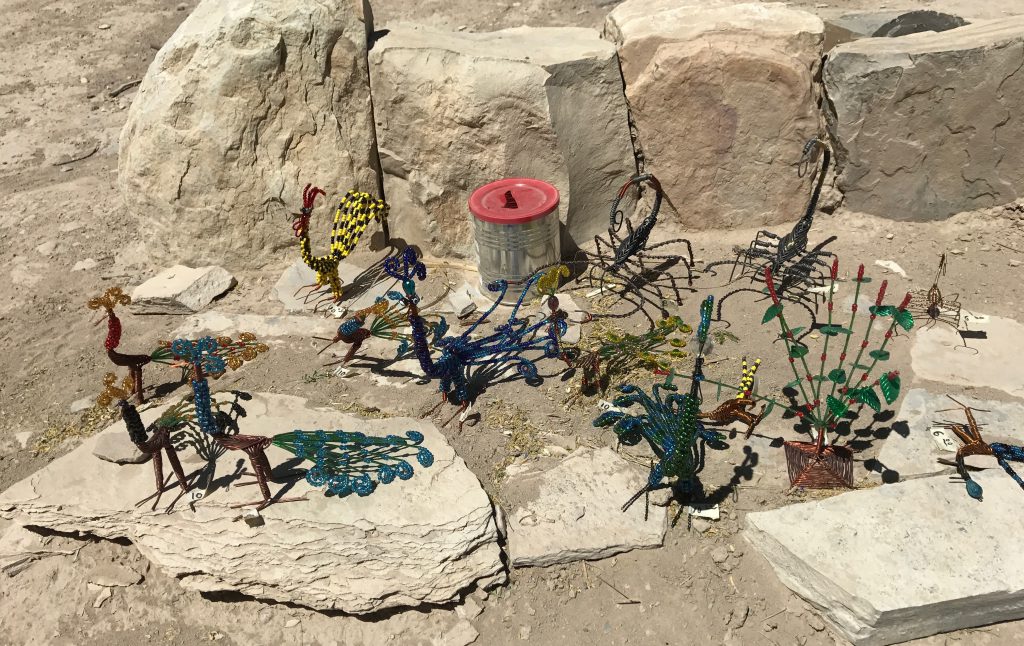 on our way home, i stopped in the middle of a tunnel that we had passed through several times, to take a picture of the landscape on the other side. that dumb rogue biker ruined my perfect shot. 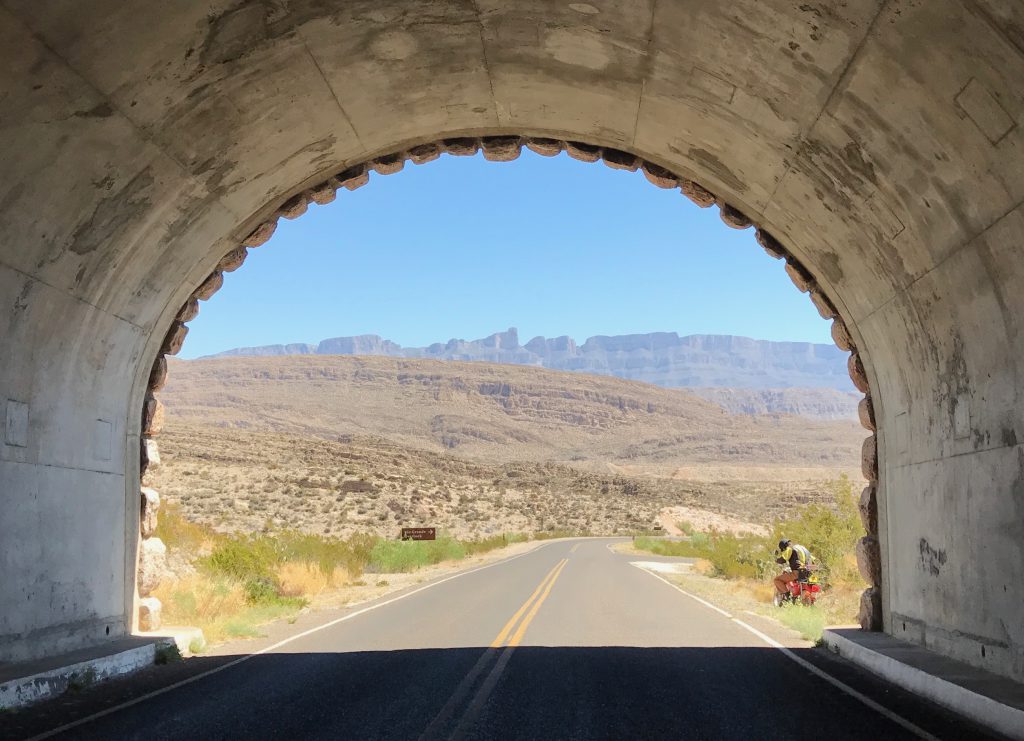 anyhow. the kids loved this place. it was their favorite. and with one more day left, it was the place they chose to go back to for our last hurrah… but that’s for another post…