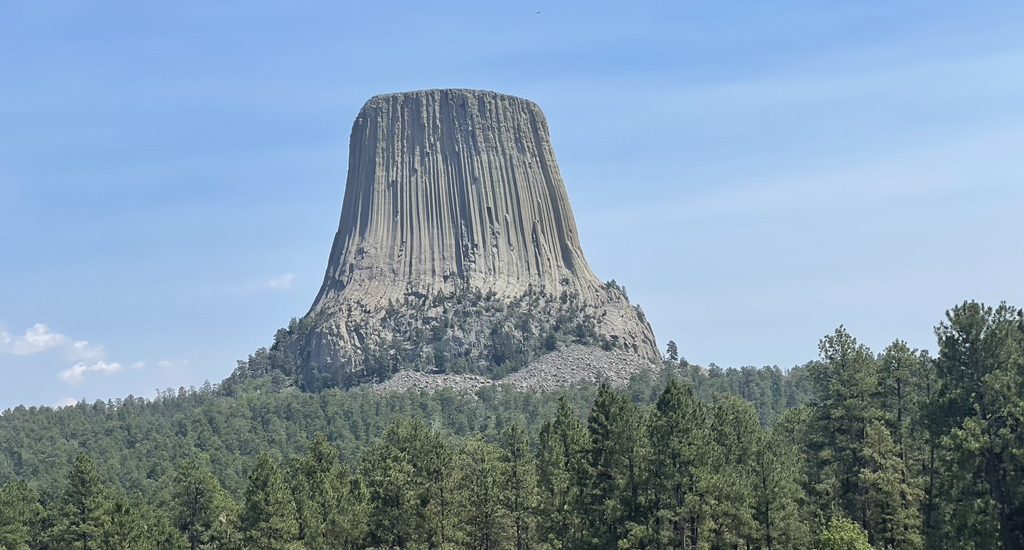 the journey to devils tower national monument passes through the tiny, little, stupid, pointless, sad town of moorcroft, just off the highway. i’m normally pretty good about observing speed limits in these sorts of situations because i know about the racket these small towns cops like to run, but i must have missed a sign somewhere and suddenly there were flashing lights in my rear view.
officer miller had a mouth full of tobacco stained teeth and i tried to be nice thinking that maybe i could avoid the worst, but he had other plans, a speeding ticket with a court date in a month. of course i won’t be here in a month, no one will, because the only reason i was passing through this lame town is to get to a one hit wonder national park. anyways, i was pretty frustrated, but i’m taking solace in the fact that this guy gets dressed up everyday to pretend to go fight crime but his whole job is a big fat racket and he’s a glorified meter maid. maybe i’m still bitter. (a quick google of moorcroft confirms that this is indeed a well known speed trap. i should have known better.)

anyways. time to set that tiny little annoyance to the side. forty or so minutes later i was at devils tower national monument. (in a long line of other people who had just arrived at the same time). eventually we were processed on through and off to our campsite. it’s first come first serve, and we were a little worried, but there were a ton of sites left, and we scored one with a pretty great view.

derek had to get some work done, so the kids and i went over to the visitor center to get info and a junior ranger book (and a badge, both located in a “help yourself” bin out front). then we went back to wait for derek to get off work so we could go on the hike around the tower.

it was pretty short. but with lots of places to stop and scramble and climb. we took it leisurely.

the tower is pretty cool. i think there’s a few magma themed theories on why this random rock formation sticks straight out of the ground in the middle of a bunch of prairie, but i don’t think anyone knows for sure.

there also happened to be a prairie dog town nearby. we are fans.

at night, we drove over to a sunset friendly location, but the conditions did not cooperate, so the best i got was this pre-sunset pink sky photo.

so, there’s not much more to devil’s tower national monument. we spent one night (snuggling the doofy dog) and then left the next morning.

on our way out, we stopped by this monument near our campground. the kids didn’t even get out of the car. i snapped some photos and we were off. devils tower is checked off and we were on to the next adventure!