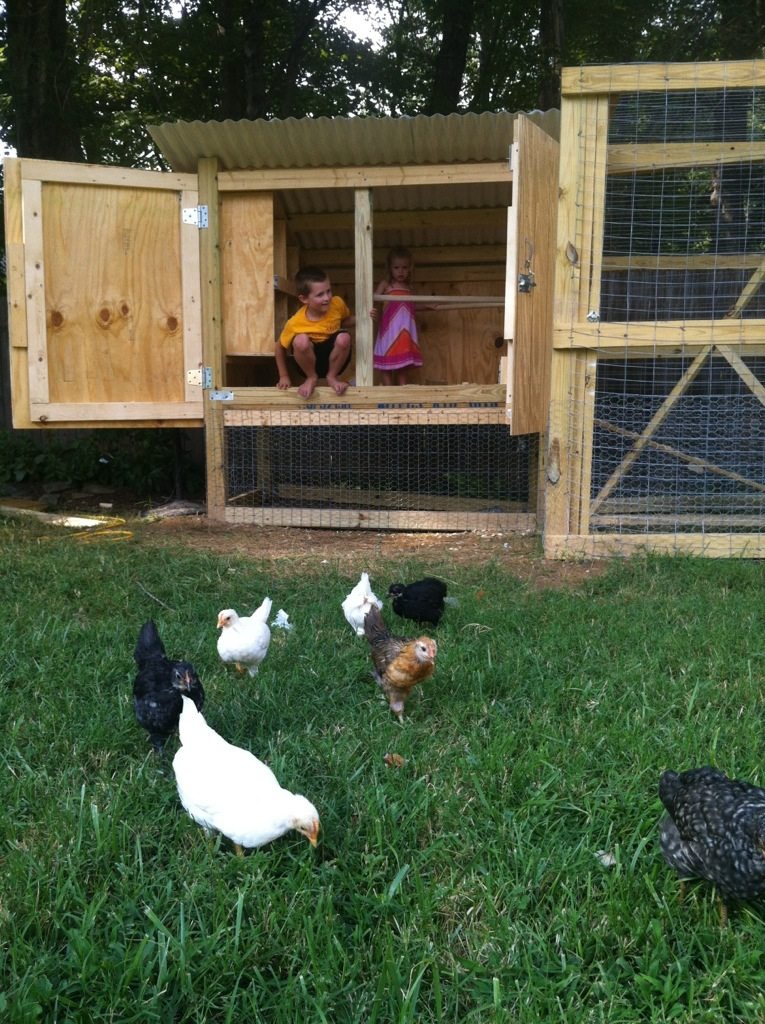 the coop has been done for awhile and the chickens moved in permanently earlier this month. lucy terrorizes them in their coop/run, chasing them from one side to the other.

anna enjoys playing in the coop.

and anna likes having them contained so she can catch them easily.

we let them out a lot. when they were smaller (i know. just a few weeks ago, they were considerably smaller), they kept finding the smallest little holes to get out of the yard. then they would just chirp at me from the other side of the fence. i have hopped more fences in the last few weeks than i have in the previous 15 years. then, the most annoying thing is, when i hop the fence to rescue them, they run away from me. me. the person who feeds them. lets them out in the morning. puts them up at night. gives them treats. plays with them. and so on. dummies.

see that snooping little dog head in the bottom left? she just seems interested, but not really dangerous, right? well, that’s not the case.

we have been taking turns letting the chickens have the full run of the yard and then lucy, since it was obvious that she got a little too excited whenever the chickens were out and about. she has had one in her mouth on more than one occasion. but, we had hopes that she would eventually learn that chickens were boring and leave them alone.

in the slight chaos of my family being in town, we lost track of lucy for a split second and before we knew it, she had taken out two chickens. it was pretty sad. we knew that she’d be a risk, and that we would probably lose a chicken or two along the way, but it was still sad.

so, now we have a little routine, where we let lucy out for awhile in the morning. then, the chickens get to come out for most of the day and lucy gets to hang in the front yard on a leash for a bit here and there. when i catch the chickens chilling in the coop on their own, i run out and shut it up for lucy to get another turn in the yard. and then i give the chickens a bunch of treats because i feel bad that lucy killed two of their friends. 🙂

one of my favorite things to see them do is play in the garden. my tomatoes are almost done and the eggplant is all gone, so they just pick at the leftovers and take dirt baths.