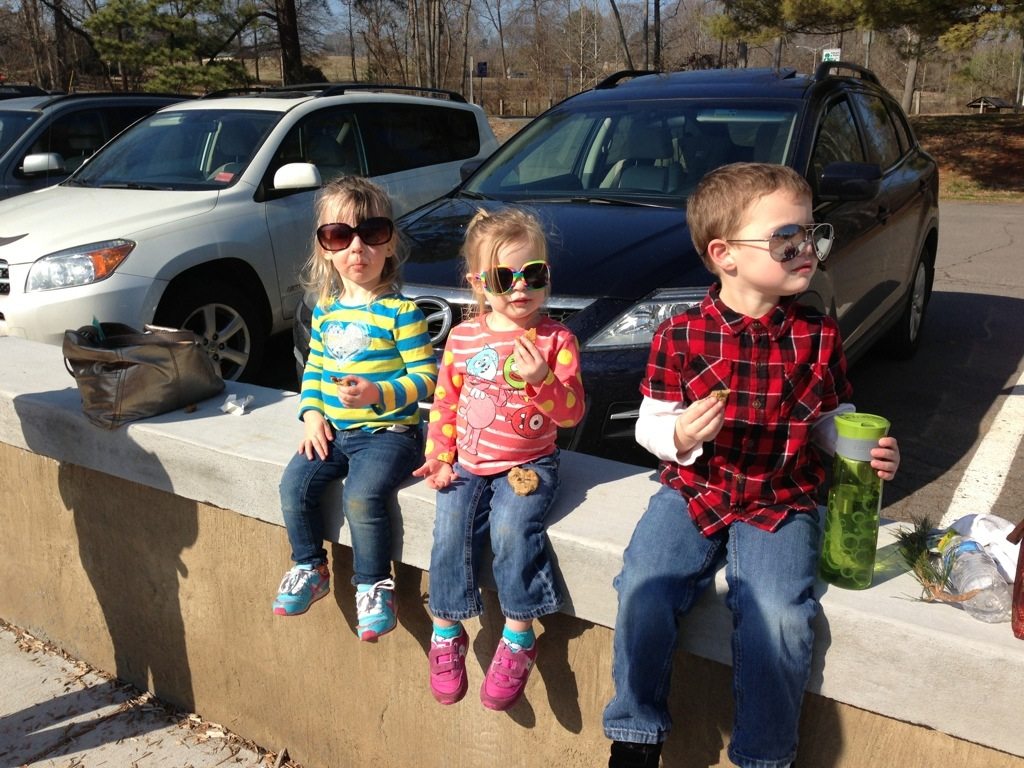 i think all of our chickens are finally laying. including the easter eggers (americaunas), who lay greenish-blue eggs.

anna still loves yo gabba gabba. mostly brobee. as evidenced by this picture.

heather and her girls came over to play the other day. livy loves our chickens.

anna is pretty crabby lately. we see this face quite often. she was screaming because i was taking a picture of her. she also screams when derek talks to her first thing in the morning. delightful.

last tuesday, ike was off school, but our afterschool pal wasn’t, so when i picked him up, we went to chick-fil-a. naturally. 🙂 and got ice cream… anna:

i “won” some foofa vans for anna on ebay. they are her new favorites. i like that they are slip-on so she can get totally ready all by herself. she can do velcro too, but sometimes the tongues give her some trouble.

the night before isaac’s sleepover, the school announced they were dismissing early because of predicted inclement weather. it was nasty and icy, but first, some pretty snowflakes fluttered down and we took pics.

then. we had the birthday sleepover, as documented in a previous post. and headed to livy’s birthday party.

the kids each made their own pizza. super cute. anna piled it on high.

isaac just put cheese on his. no sauce. no toppings.

the next morning, i got to work on ezra’s cake. since anna had missed out on all of ike’s birthday sleepover festivities and cake consumption, i enlisted her help as the initial frosting removal technician.

isaac is currently in love with legos. he got this sweet construction set from livy and maya (and probably mostly their parents) and put it all together himself. he’s getting big and smart.

anna and her bears.

yesterday. it was 72. degrees. and we went to the park with some friends. for hours. so much fun. anna and shira played well in the open space. (sometimes in closed environments, they are arch enemies).

this guy loved the park. he fell asleep when we went on our long run to pick up ike, get gas and then wait for his sister in her pickup line. then he insisted he was just pretending to sleep.

soon, emmett will be running around with the kids. for now, he just looked on. and was cute. 🙂

the park bathroom was closed. there was a port-a-potty. anna is terrified to use it. i don’t blame her. she could fold right up in half and slip right down into that hole. not to mention the obvious disgustingness of a port-a-potty. anyhooooo. we roll with a potty in our car at all times, so when she took a potty break, i took a picture. :).

all the cool kids.

when we got home, we went out to collect eggs. the warm weather must have made our chickens happy, because we found 9 eggs. we have 10 chickens, so that’s a pretty good take. they lay every 25ish hours. so we figure we’ll get 8-10 a day when they are in full force.