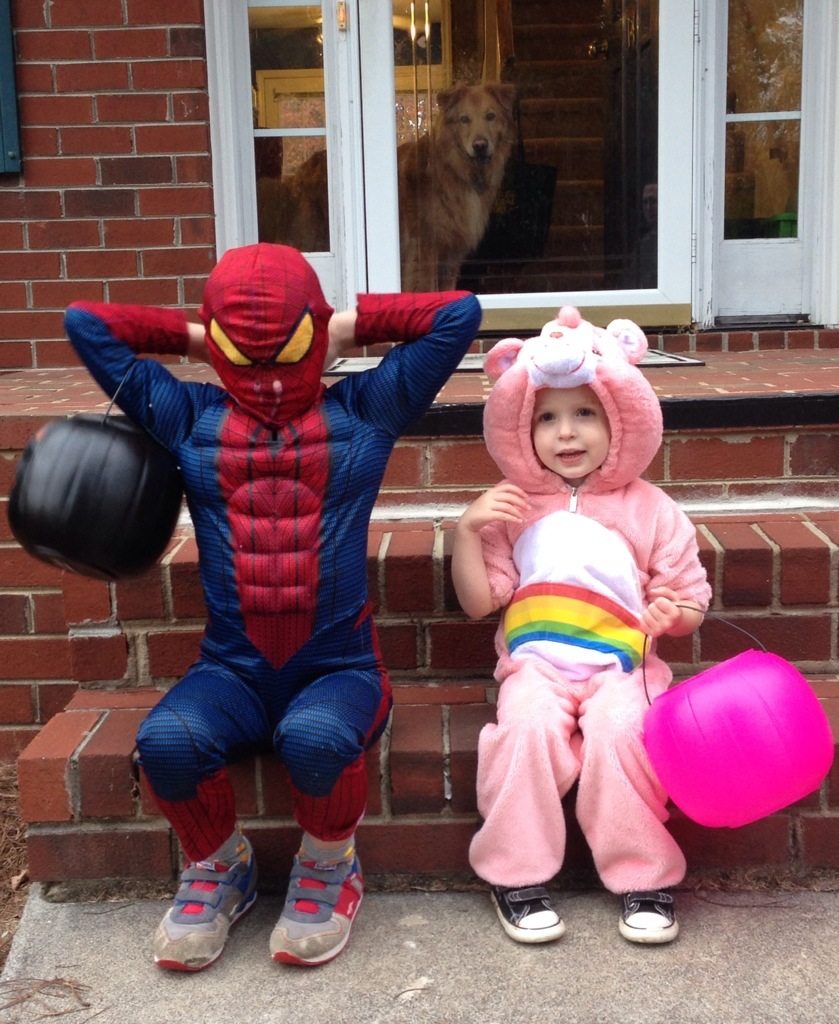 thursday was halloween. in case you missed it.

isaac had a party at school to celebrate. well, not a party. a “special snack”. because they are allowed only two official parties in the year. so, i think they save them for the “winter break” and end of year. anyhooo… we (some moms) rolled in with cookies to decorate, lots of snacks and treats, and some games. 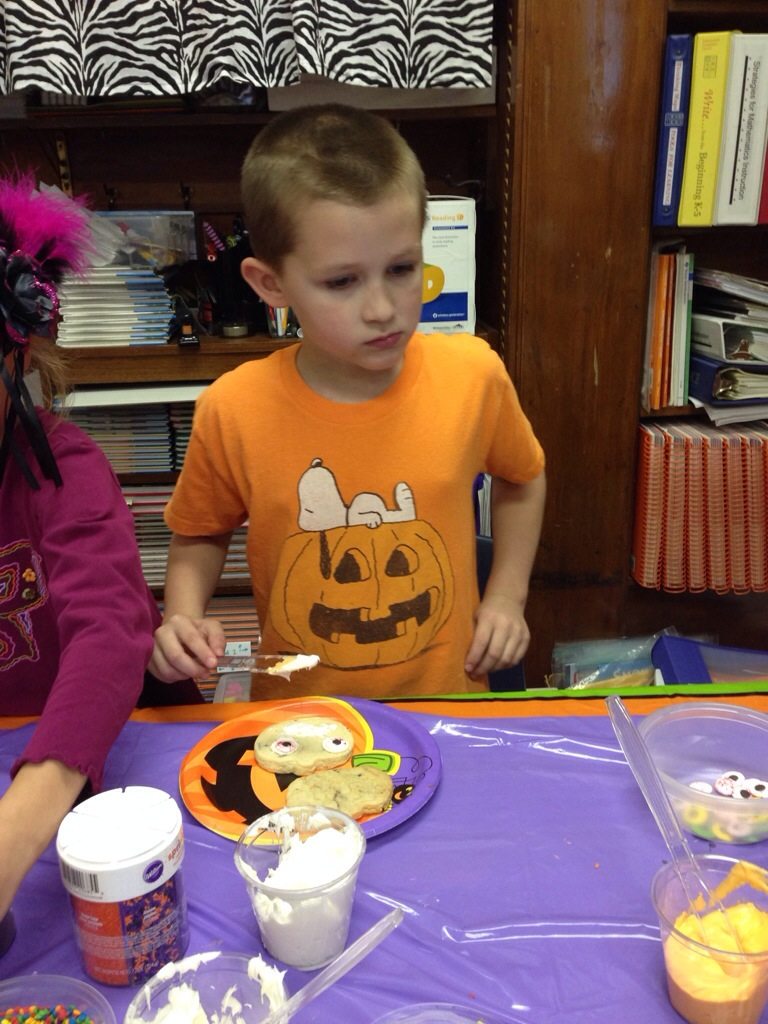 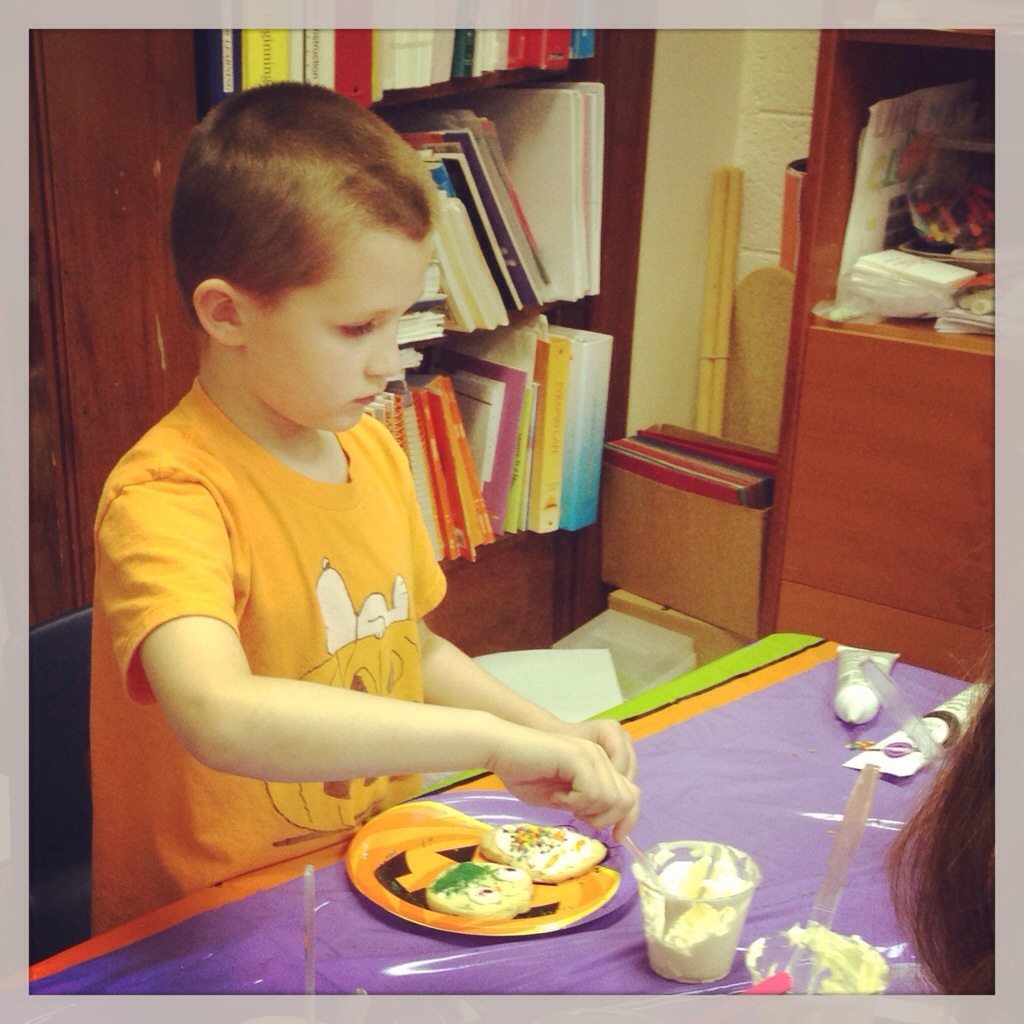 after he was successfully sugared up, i brought him home, where both kids waited impatiently for the acceptable time to begin trick or treating. it was a long afternoon, i assure you. finally, after dinner, they costumed up, isaac as spiderman and anna as a care bear. cheer bear to be exact. which is humorous, because she’s the opposite of cheerful. but she is cute. lucy wishes she was invited. 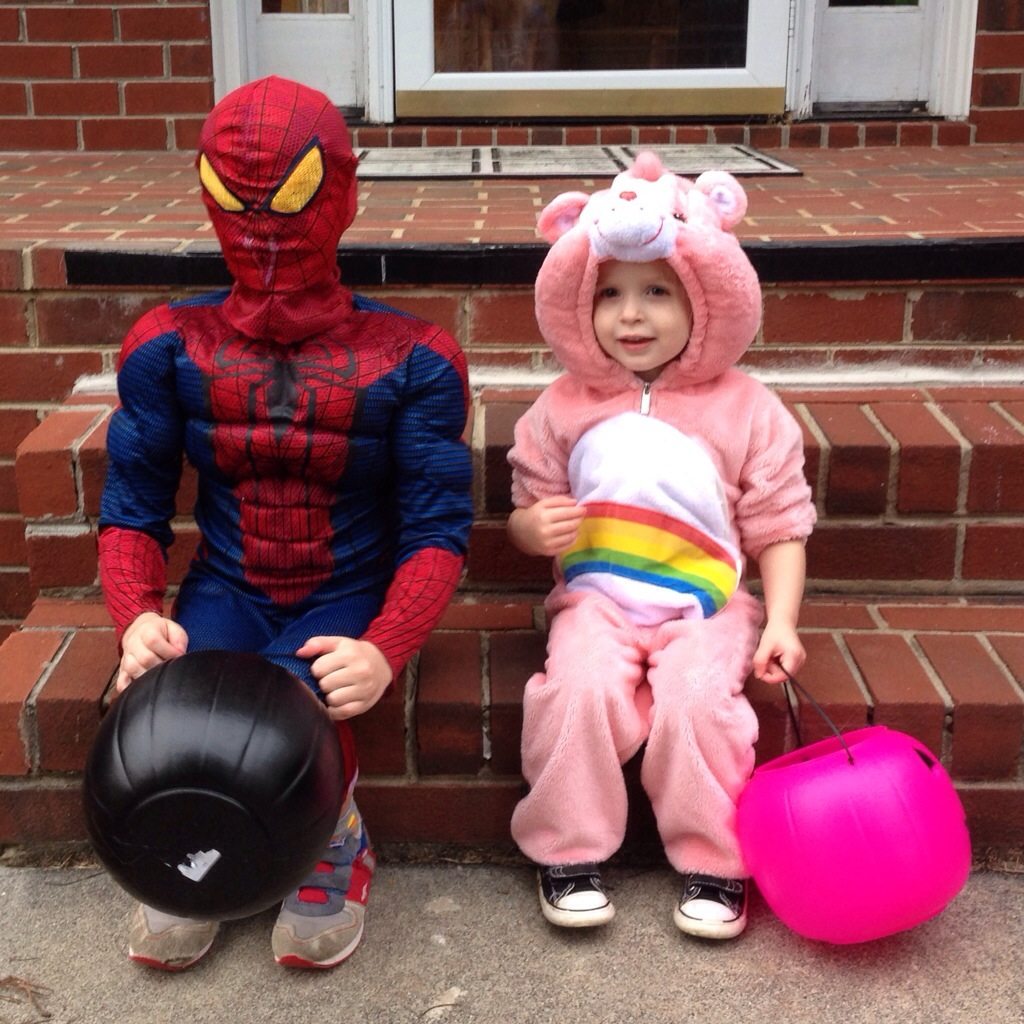 since it was still light out and there were no trick or treaters already crawling our streets, we loaded up and went to a trunk or treat at a church nearby. just as we parked, a tractor showed up to drive us right up to the first trunk… a pleasant surprise. 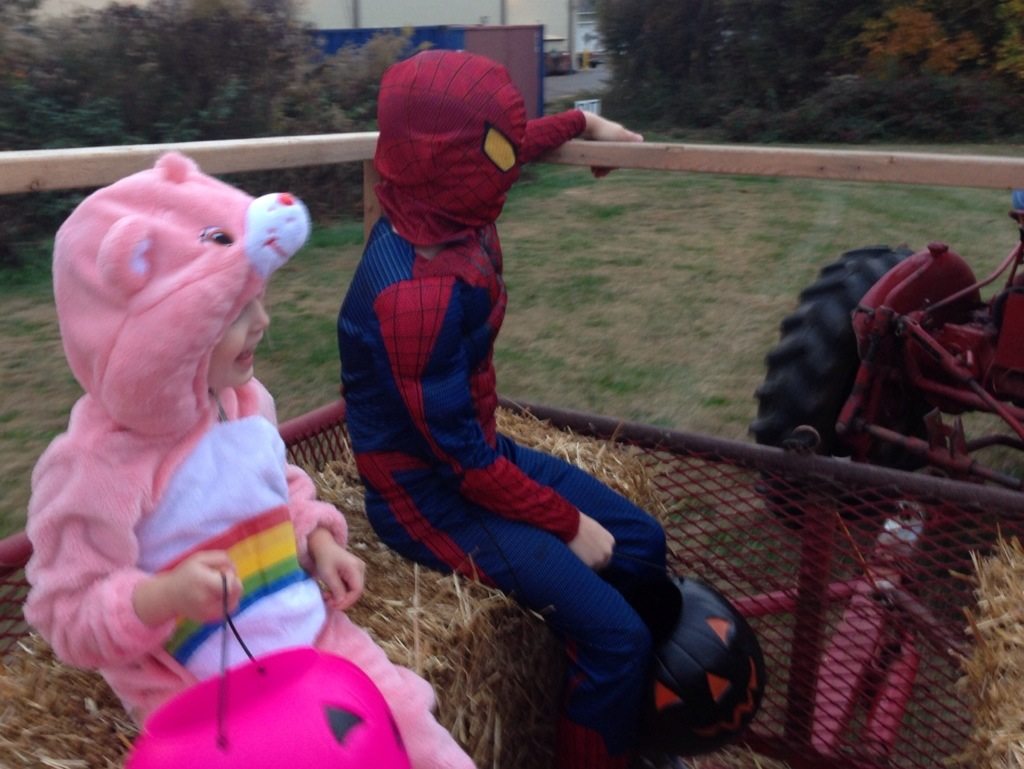 despite studying up with “it’s the great pumpkin, charlie brown” numerous times, anna was still a little unsure about this whole asking strangers for candy thing. especially the ones that had elaborate costumes and decorations on their cars. but, she followed her older, more experienced at halloween brother and scored a pretty good pile of loot. 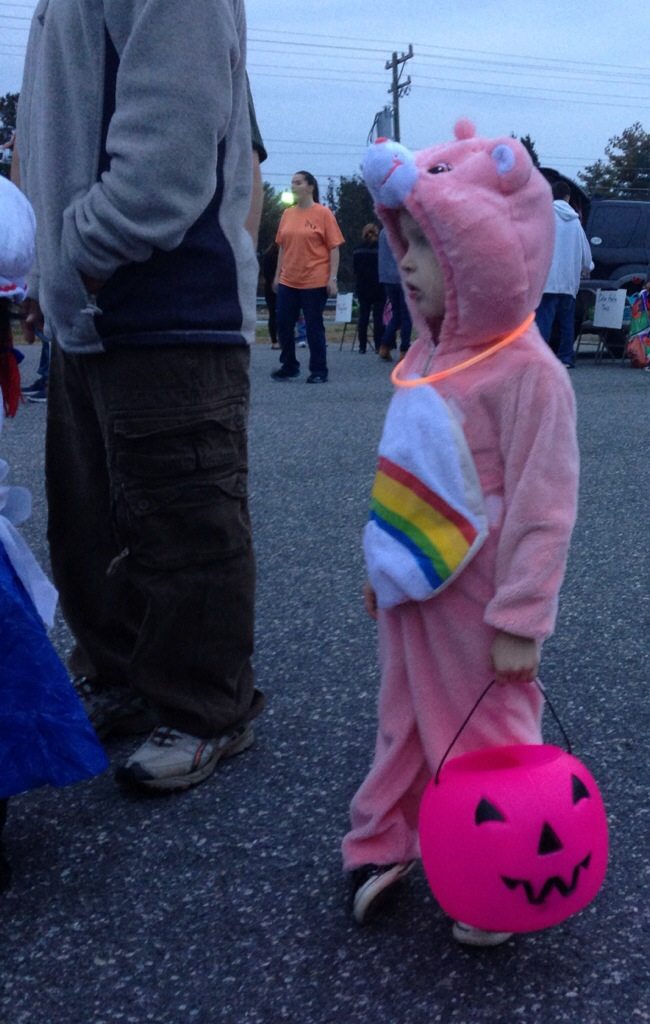 when we came back home, our neighborhood was filled with trick or treaters, so we loaded up a wagon and hit the streets. we didn’t get very far. the kids tired out fast. isaacs mask was hot and sweaty and he couldn’t see. and kept falling. and anna just rode in the wagon and ate her candy, with no interest in acquiring more. so, we came home pretty early, de-costumed, and the kids handed out candy to the last of the trick or treaters. 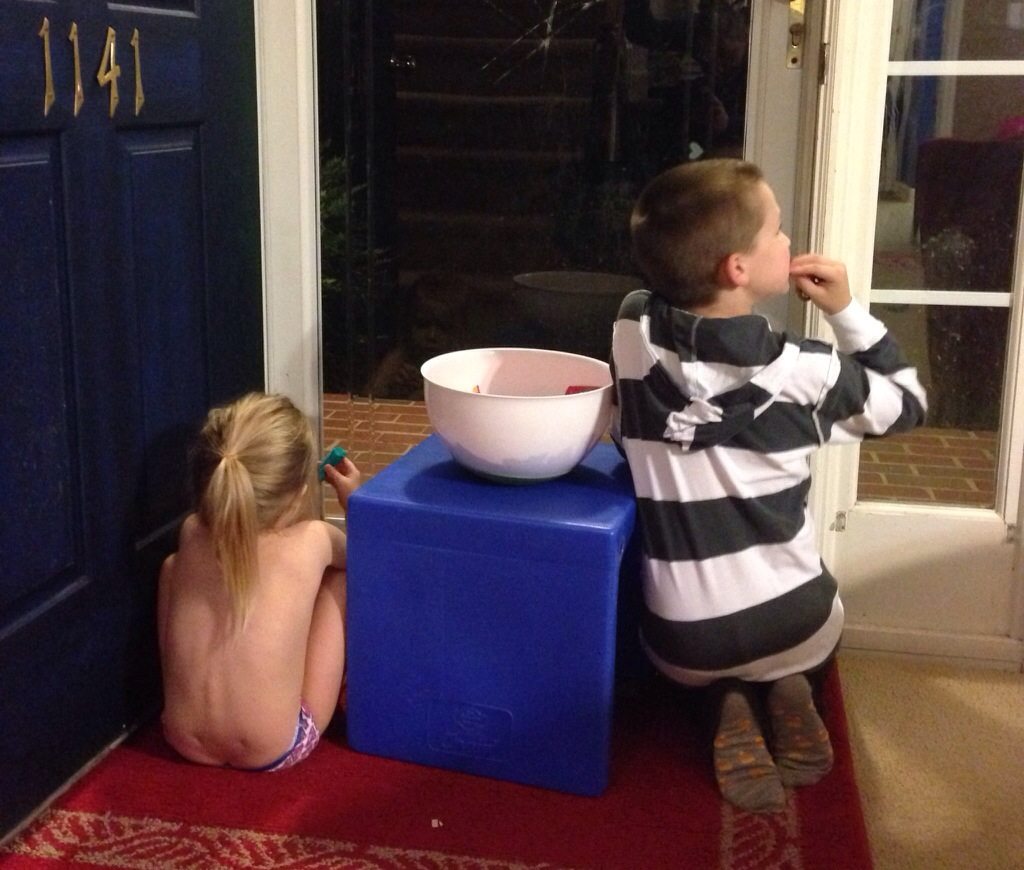 then, they filled up on candy, watched the great pumpkin one last time for this year and went to bed. when they woke up, they immediately asked for candy. i miss the old days, with the terrible memories and all, when we could just hide the candy away and all would be forgotten. silly growing kids.