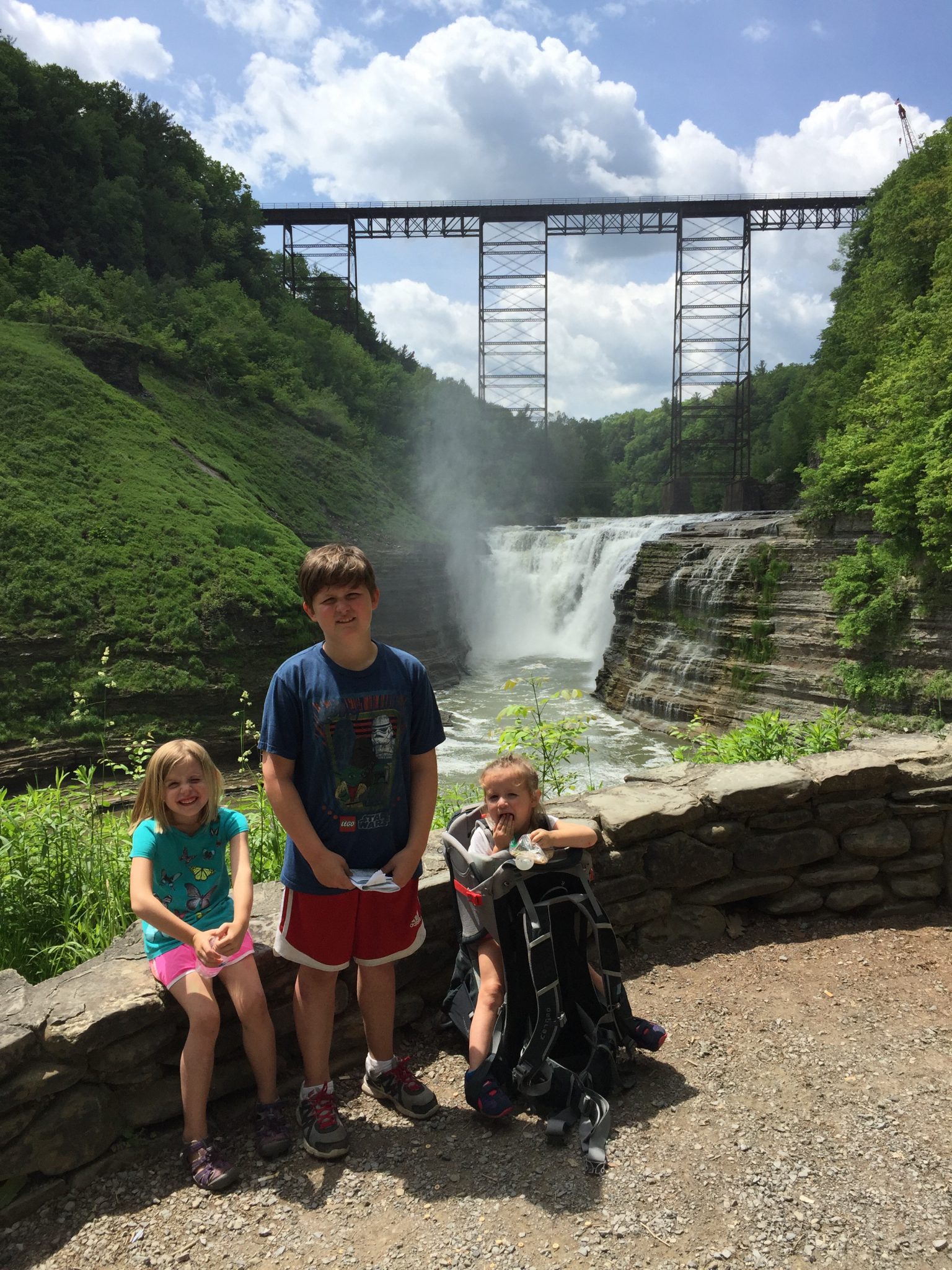 so, on memorial day, we packed up and left my mom’s and headed to letchworth state park. it’s only about 35 minutes or so from batavia, so it was a pleasant commute. we’ve been pretty busy exploring so far, and i have been forced to take an excessive amount of picture due to the majestic scenery and cute kids, so this is a rather long post full of pictures.

on the way in. it’s a bit surreal that between here and the blueish horizon is a massive gorge.

our first site was terrible. we couldn’t get level. so, we drove around to look for a new place, while derek checked availabilities online. we finally found a better spot, but the kids were very much over sitting in the car at this point, so while derek set us up at camp, we hit up the playground.

on our first full day, the kids and i headed out to check out the overlooks and scenery.

on our way to the middle falls, we stopped to pose with a tiny little stream flowing down across the path.

the middle falls. and the crazel.

on our walk from the middle falls to the car, anna plucked a colorful bouquet of tiny wildflowers.

the upper falls. isaac said “take a picture of me looking through this” — even though we hadn’t paid money to make it work.

three lid kiddos and the upper falls and train trestle.

on our way back to the site, we stopped at “inspiration point”, where you can see up the river to the middle and upper falls and the train trestle. the pics don’t do it justice.

back at camp, derek performed his duties as grill master.

after dinner, we went exploring on our bikes. the kids are getting pretty good with trails. isaac struggles a bit with his new bike because it’s still a little too big (and too much bike). and poor anna, with no gears, has to work hard to get up hills.

meanwhile, i have this little passenger bumping along behind me. she loves it.

anna has become a great reader and loves to read to hazel at bedtime. hazel doesn’t seem to mind.

the next day, we decided to check out the “wolf creek” area of the park. it’s a creek that comes from silver lake nearby (which, incidentally, is where i went to summer camp as a youngster), and flows into the genesee river, via a slightly terrifying waterfall. again, the pictures don’t do it justice.

further upstream, the water just barely trickles by, so we hopped out to do some exploring.

we flipped over a bunch of rocks to check out some wildlife, and of course anna, the animal lover, was the first to find a salamander.

this is next to the bridge overlooking the falls. it looks so innocent, but drops of fast and long. you can see the edge behind the kids and then see how deep the gorge is by looking at the trees in the distance. kind of nerve racking with a crazy 2.5 year old running about.

the next day was super rainy and blah. there was a lot of screen time. after dinner, the weather had cleared up, so derek finally escaped the campsite with us to go sightseeing.

upper falls, from the top. (the kids and i didn’t venture up this far the first time).

and derek took this from where he was in the previous pic.

a train passed by while we were up there. so that was pretty sweet.

on friday, i decided that we would go tour the mount morris dam. we had to go up and out of the park and then back down the other side of the river to get to the dam area. it was just us and another older couple. we walked out onto the top of the dam. here’s isaac looking downstream.

and the girls. still looking downstream.

a pic with the dam wall, before we headed down inside it. i wasn’t allowed to take any pics inside, for security purposes. or whatever.

inside, we saw the hydraulic “heart” of the dam. and two big pumps that lower the gates. and we looked up and down creepy, narrow, steep staircases that go up to the top and under the river bed. we learned about water seeping into the dam. and that the concrete is still drying after 60 years. it was pretty cool, for me at least, and maybe ike a little.

back at the top, isaac got a mini lesson about one of the times the genesee river flooded. the guide/ranger is showing him the water level that the river reached.

there was a little visitor center, where we did a bit of reading about how the dam was built, but the kids mostly just wanted to play on the playground. while they did that, i strolled over to get this pic of the dam. (there was a big field trip group, so they never noticed i was gone). that tiny car, next to the tower on the near side of the dam is where we were when i took all the previous pics. the elevator that took us down under is in that tower.

after our big learning experience, we stopped for pizza (and a chicken finger sub) at “the leaning tower of pizza” in mount morris.

on our way back to the campsite, i made the kids humor me for one more pic. we stopped at the dam overlook from the northwest side of the river and there was a giant chair for whatever reason.

the view of the dam on “our” side of the park. (most of the stuff to do it on one side. our side. the campsite. the overlooks. the park road. the visitor centers. etc).

another overlook. i was on my own for this one. the kids waited in the car. i guess gorges are not as exciting for them.

on friday night, we had a campfire. and roasted marshmallows.

we even put up the tent and the kids and i attempted to sleep in the tent for the night. hazel only made it for about 30 minutes. isaac got up at sometime in the night and went to bed because it was too cold.

this little bundle of blankets with a head was the only one to make it until the morning. 🙂

anyhow, this is my stopping point.
we had a little family outing yesterday that i’ll blog about later.
it’s rainy and blah today so i might have to surrender the computer screen for movie watching soon….