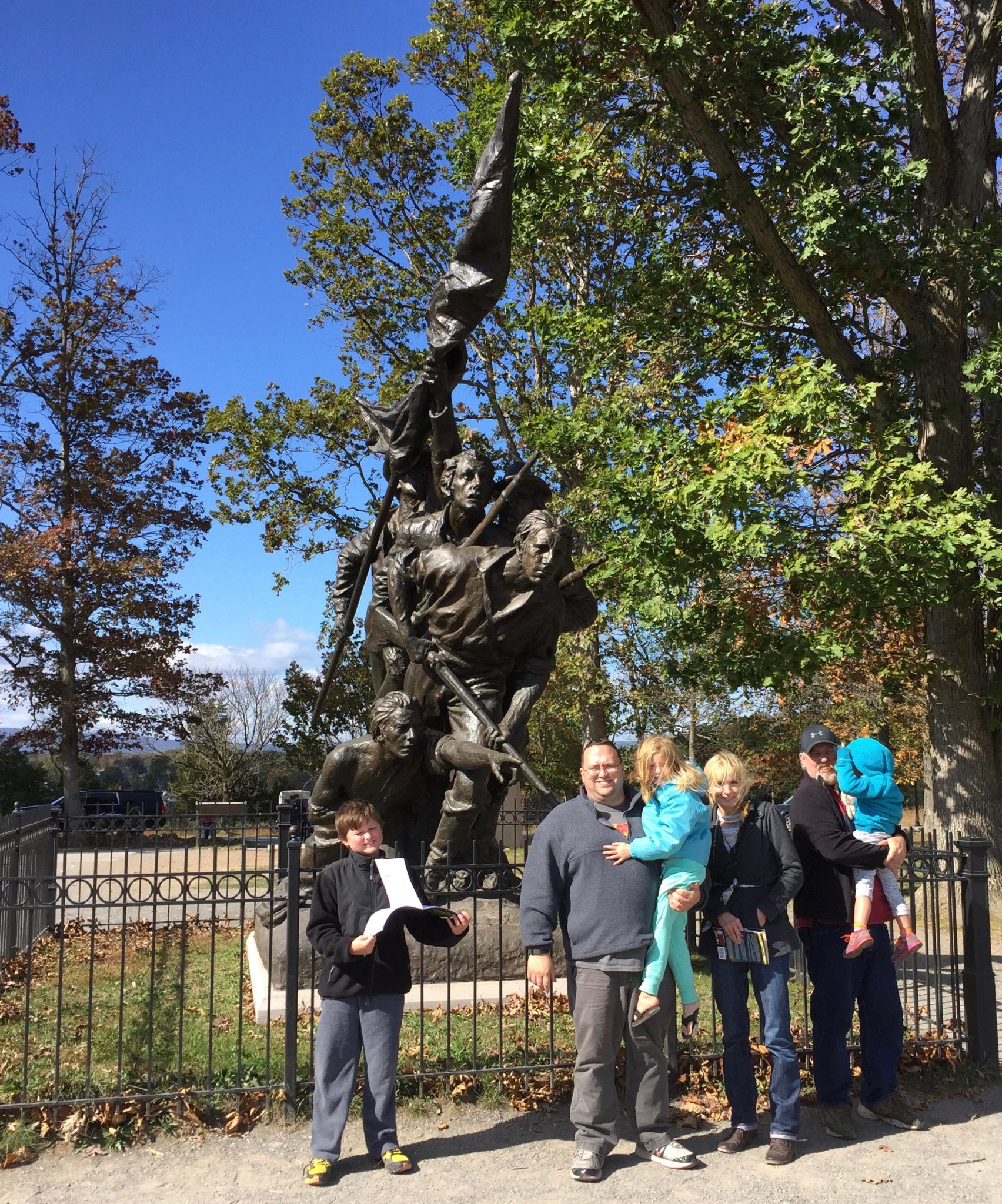 on thursday, my mom and stepdad rolled into town for a quick little visit. yesterday (saturday), we all packed into the minivan like sardines and drove to gettysburg to get some civil war knowledge in our brains.

so, it was really cold and really really windy. hazel had a fail proof solution. 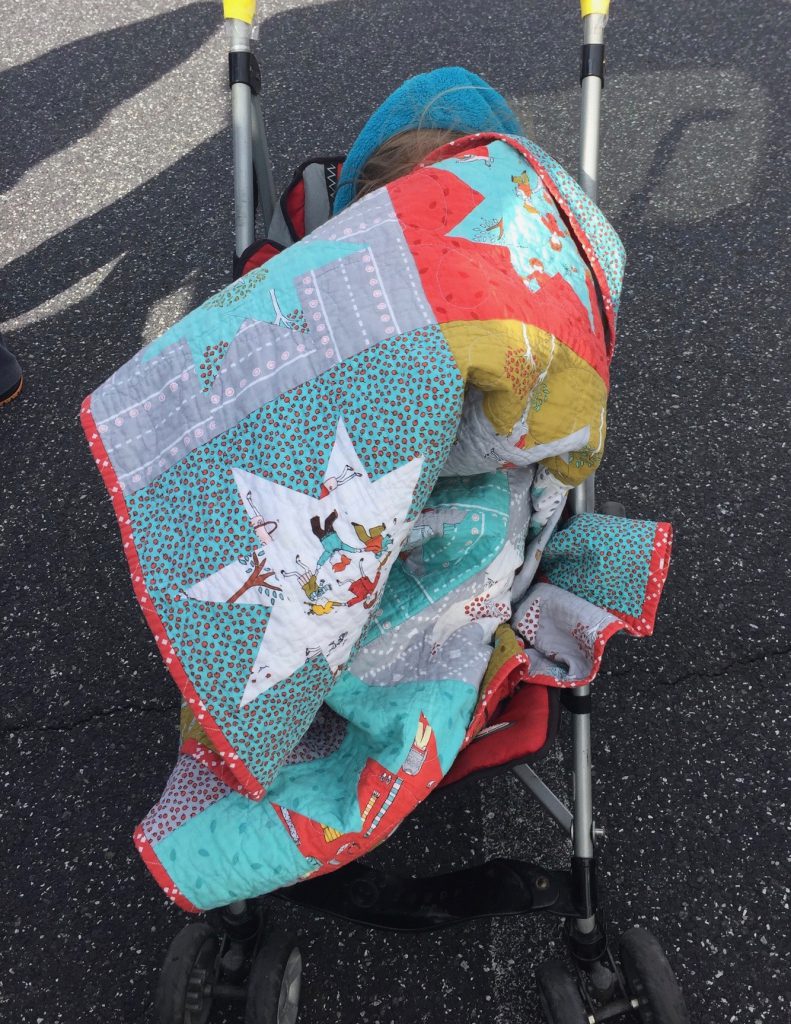 derek is mad at me for ruining his “walking into the visitor center” selfie. 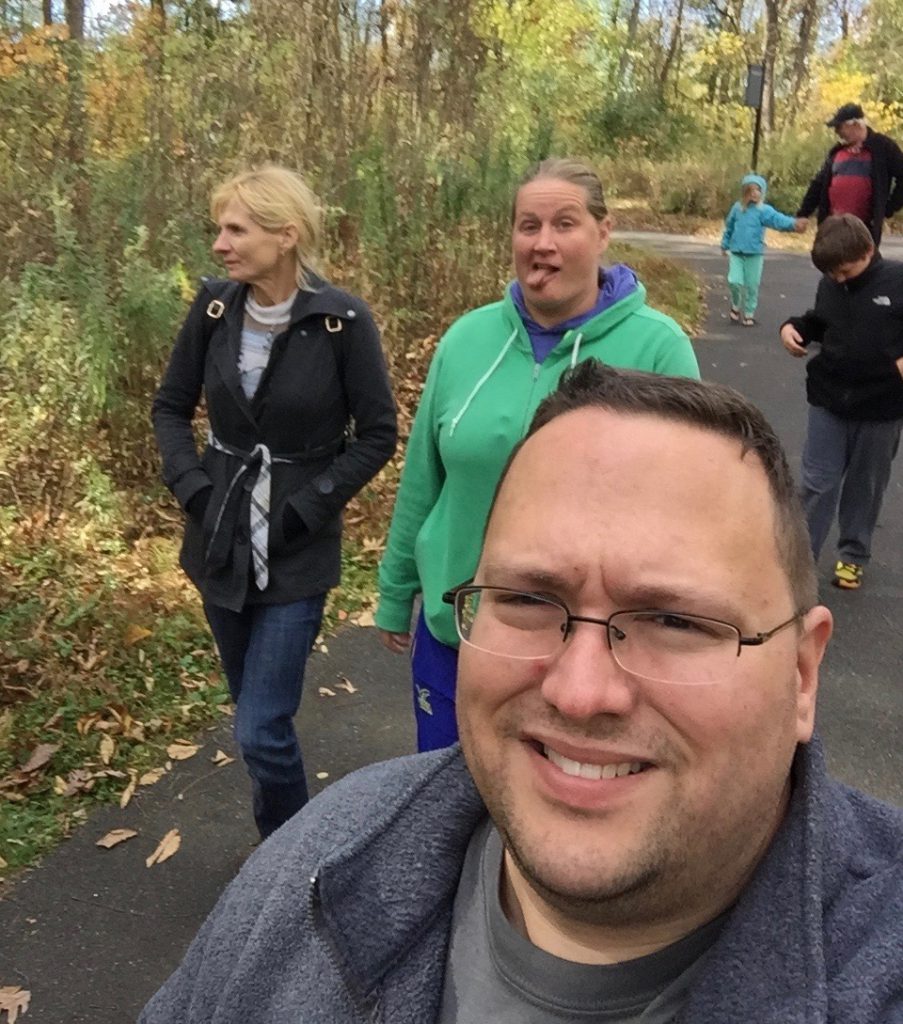 we opted for a car audio tour of the park. gettysburg national military park basically surrounds the town of gettysburg, so there’s a lot of distance to travel when talking about the three day battle of gettysburg. between the stops, the magical voice on the cd told the story of how the battles went down. and at each stop, it would point out different landmarks and monuments and explain their significance. i recommend it if you ever find yourself there.

cannon. first of many. 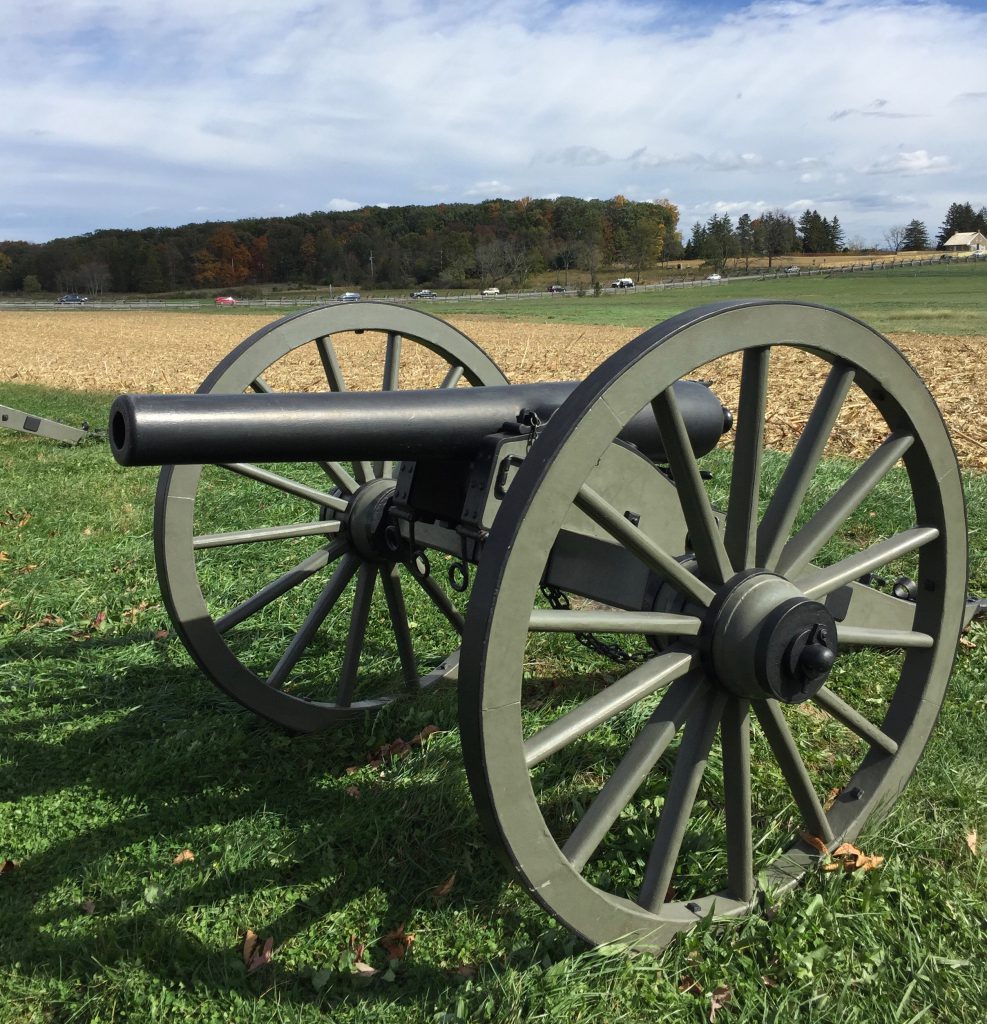 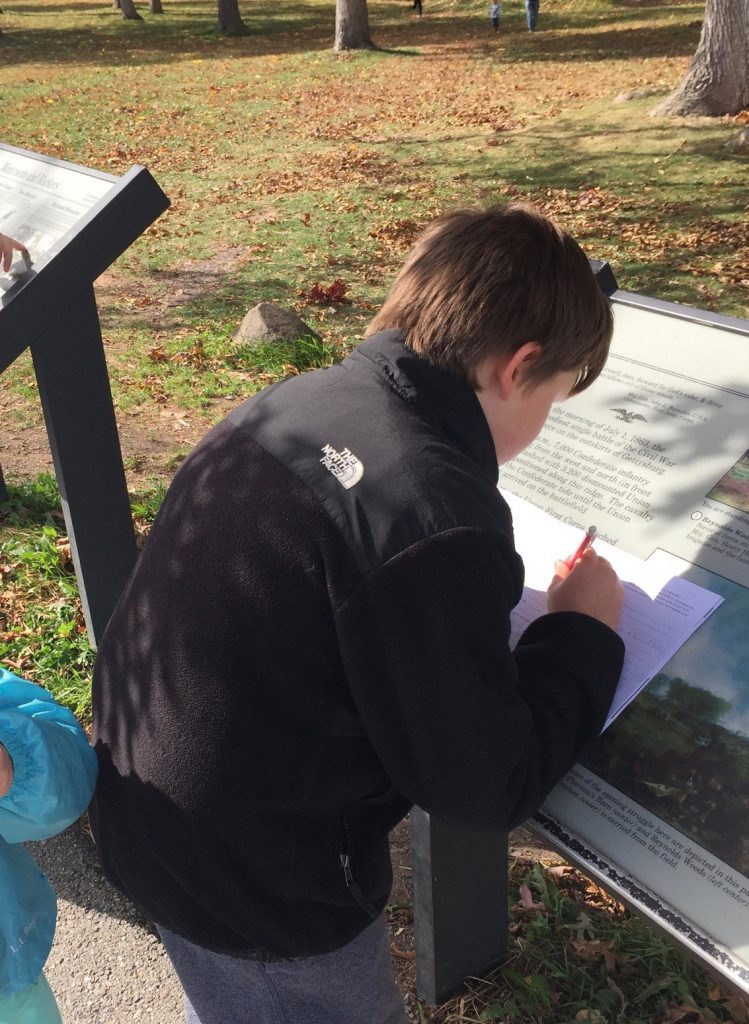 one of the first monuments. there are over 1300 statues and monuments. 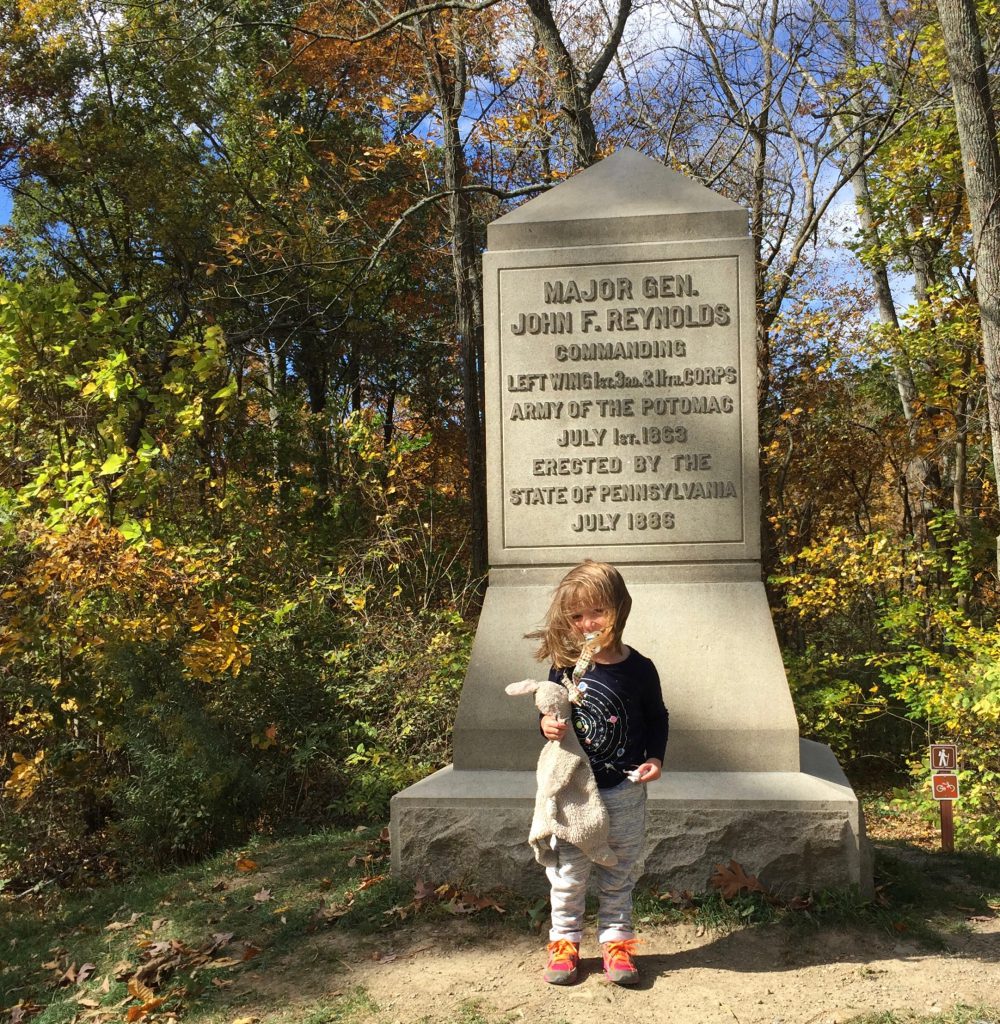 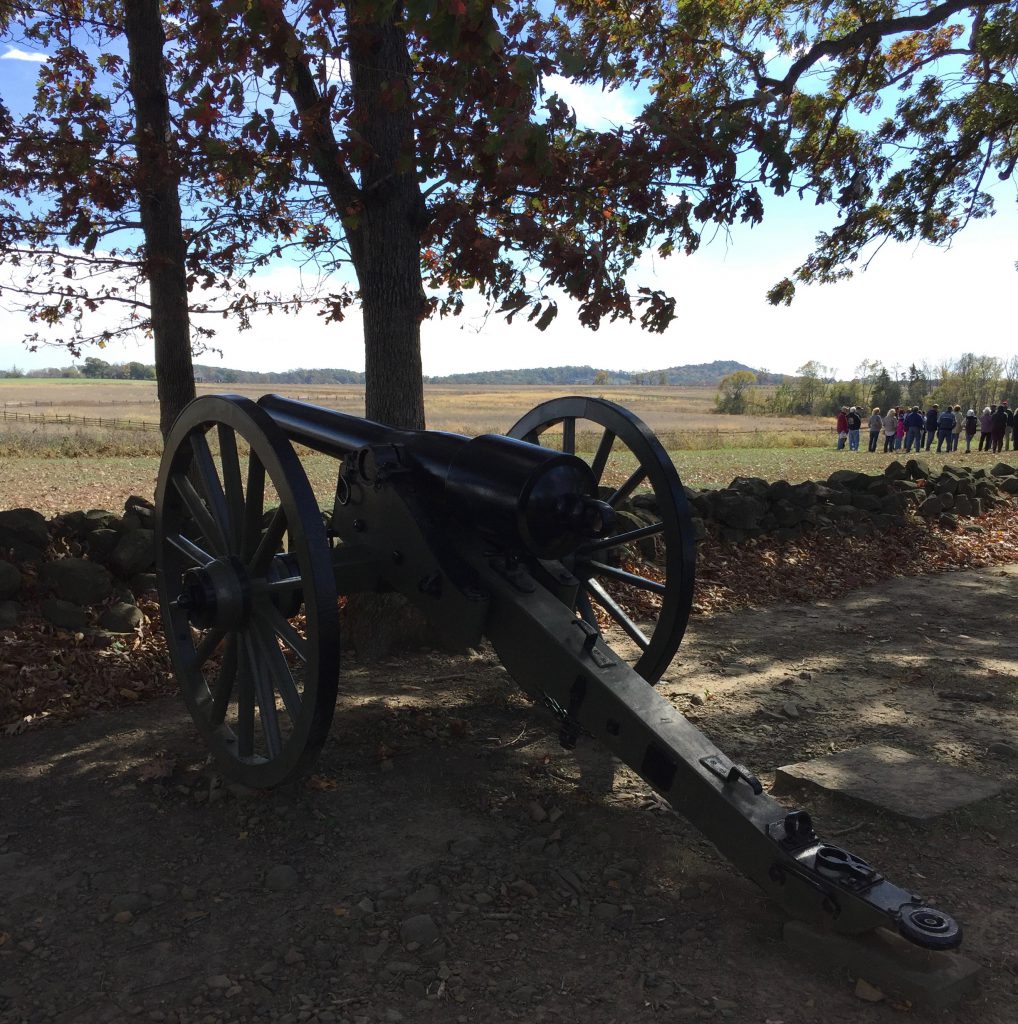 and a cannon selfie. 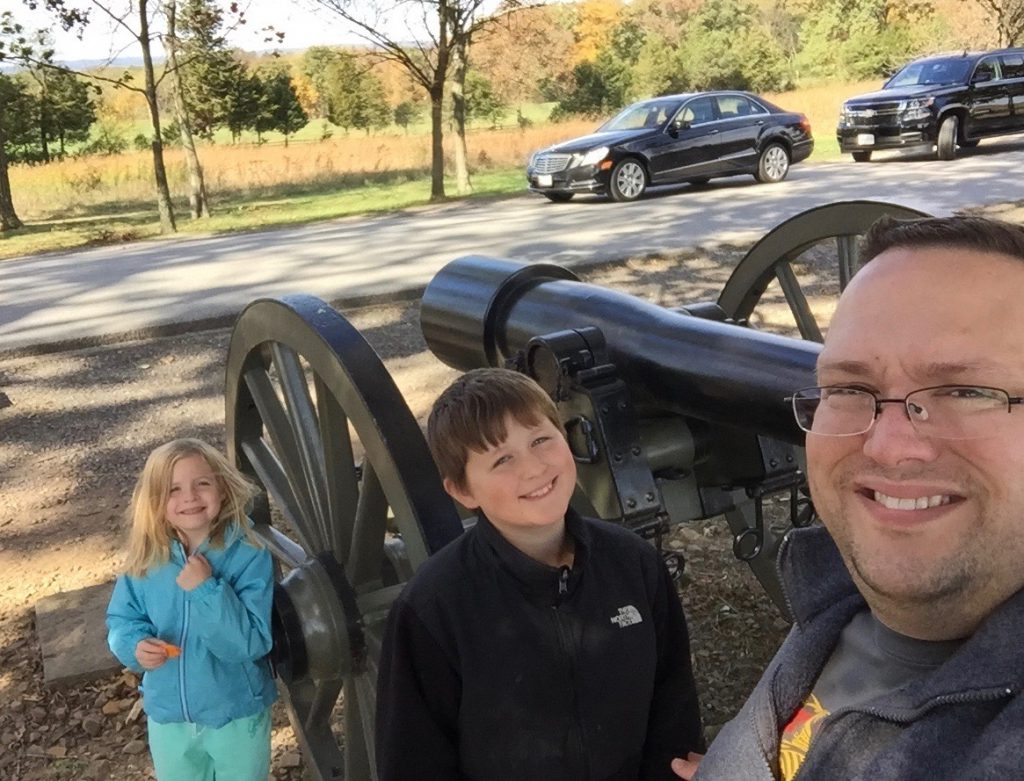 we obviously had to stop and walk around the north carolina memorial. (we skipped a few stops to keep the tour manageable for the tiny people). 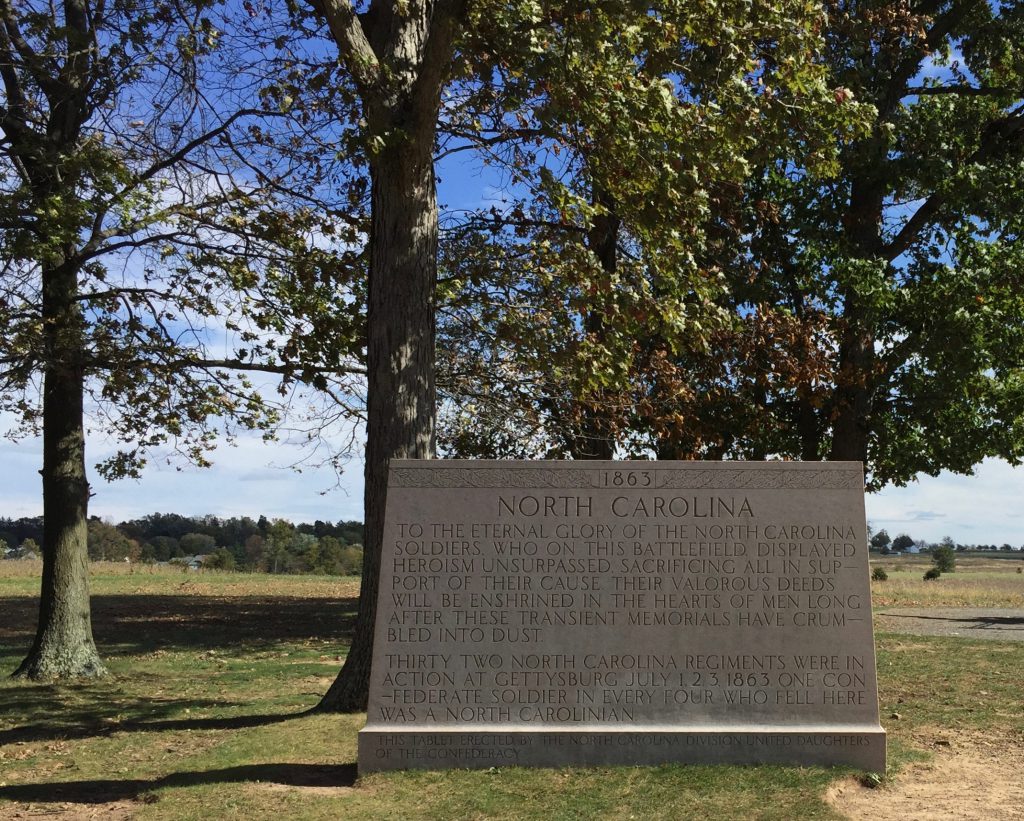 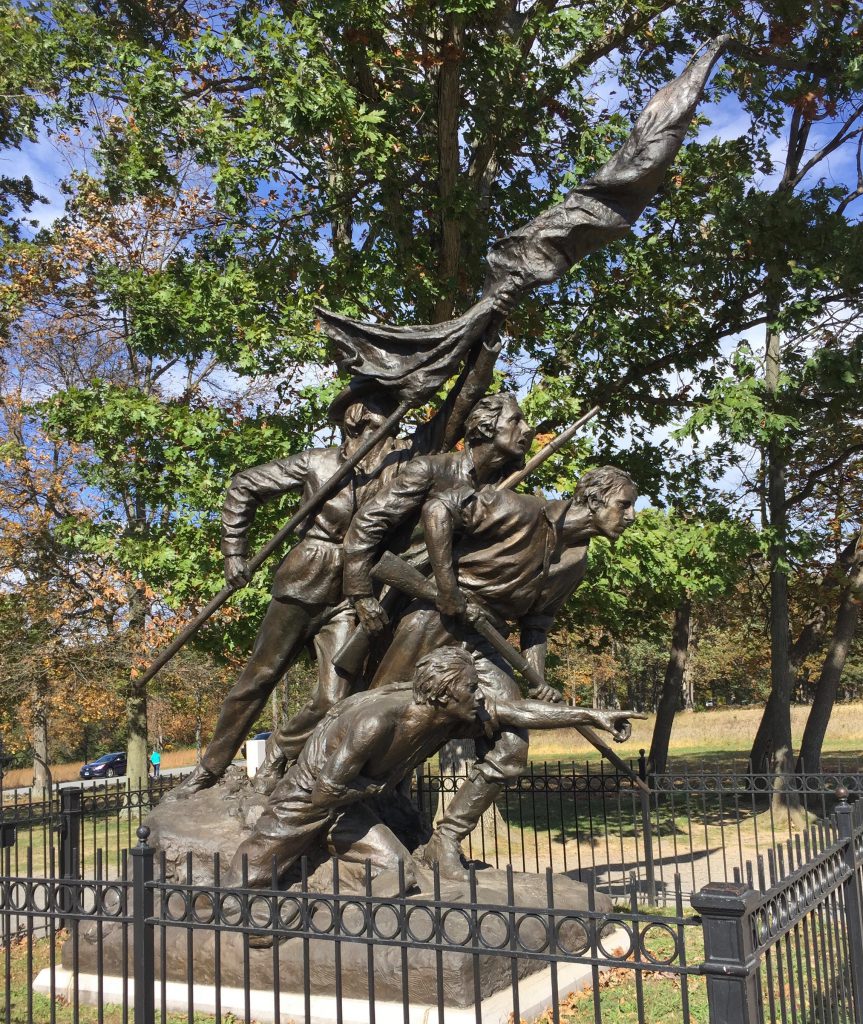 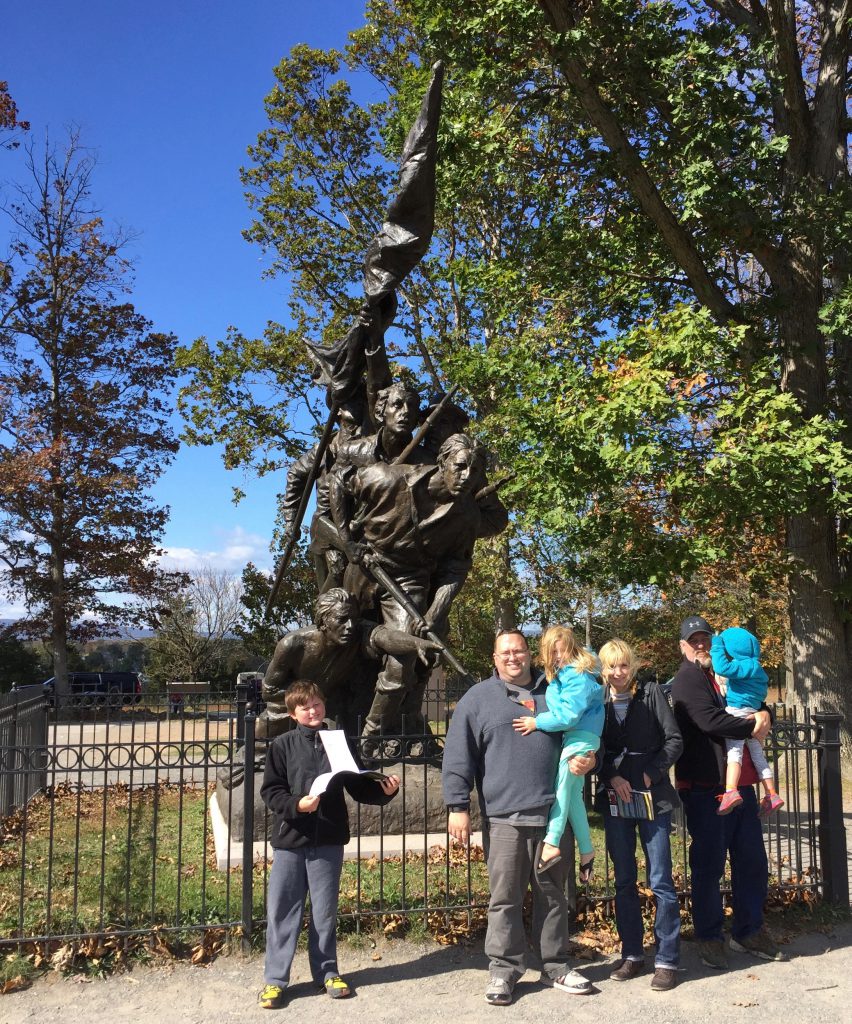 the virginia memorial was pretty cool. we just did a drive by of this one, for sanity’s sake. 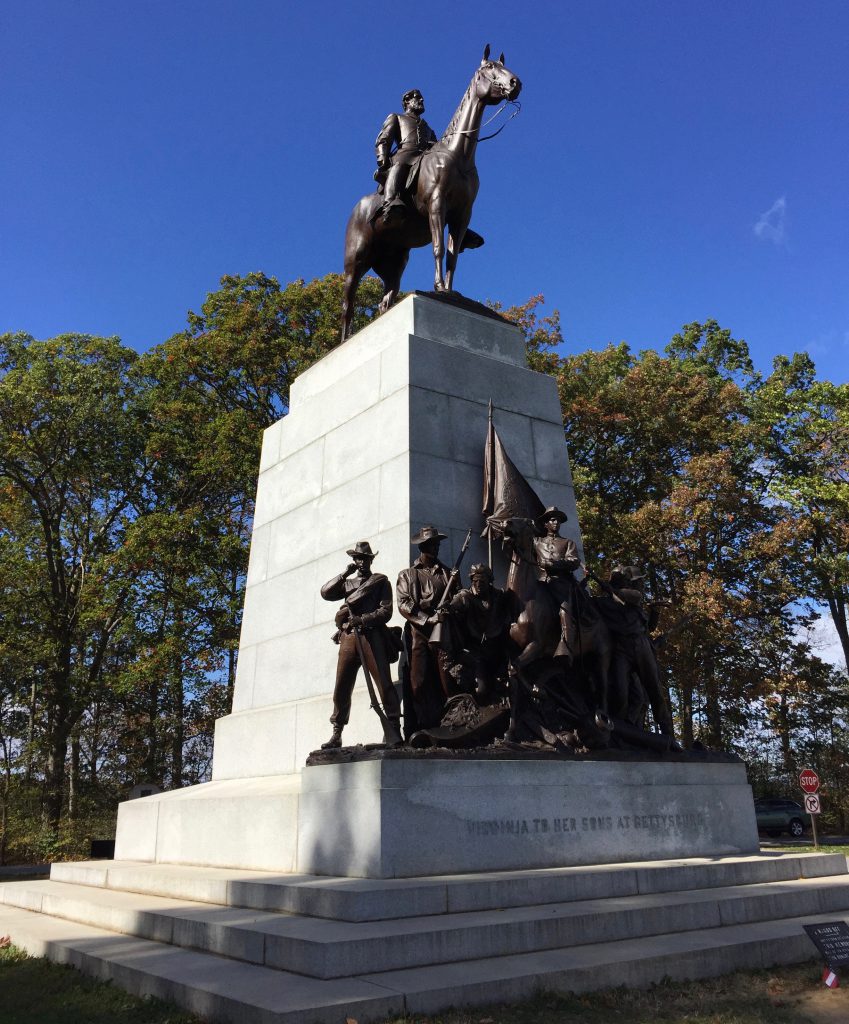 we spent the most time at little round top. we wandered around at the top in the tornado-y wind gusts before making our way down to do a little boulder hopping (a lid kid all time fave). there were monuments everywhere. 🙂 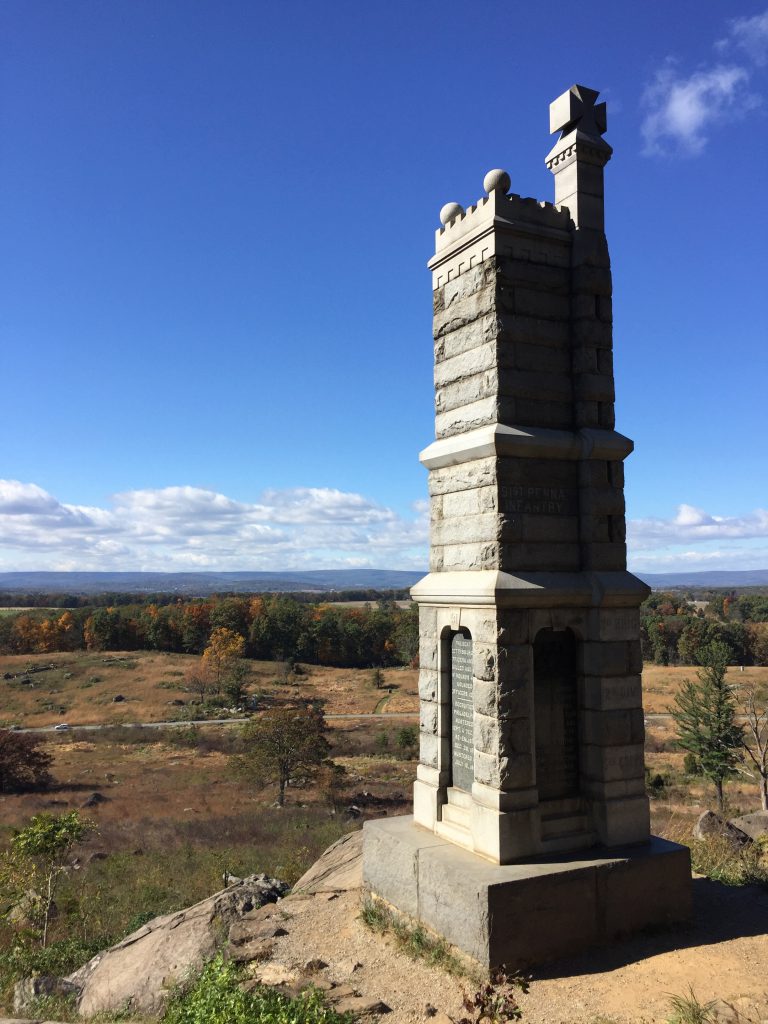 derek took this panoramic shot of the view from little round top, where the confederate soldiers would have been attacking from, while the union held them back from behind the big boulders. 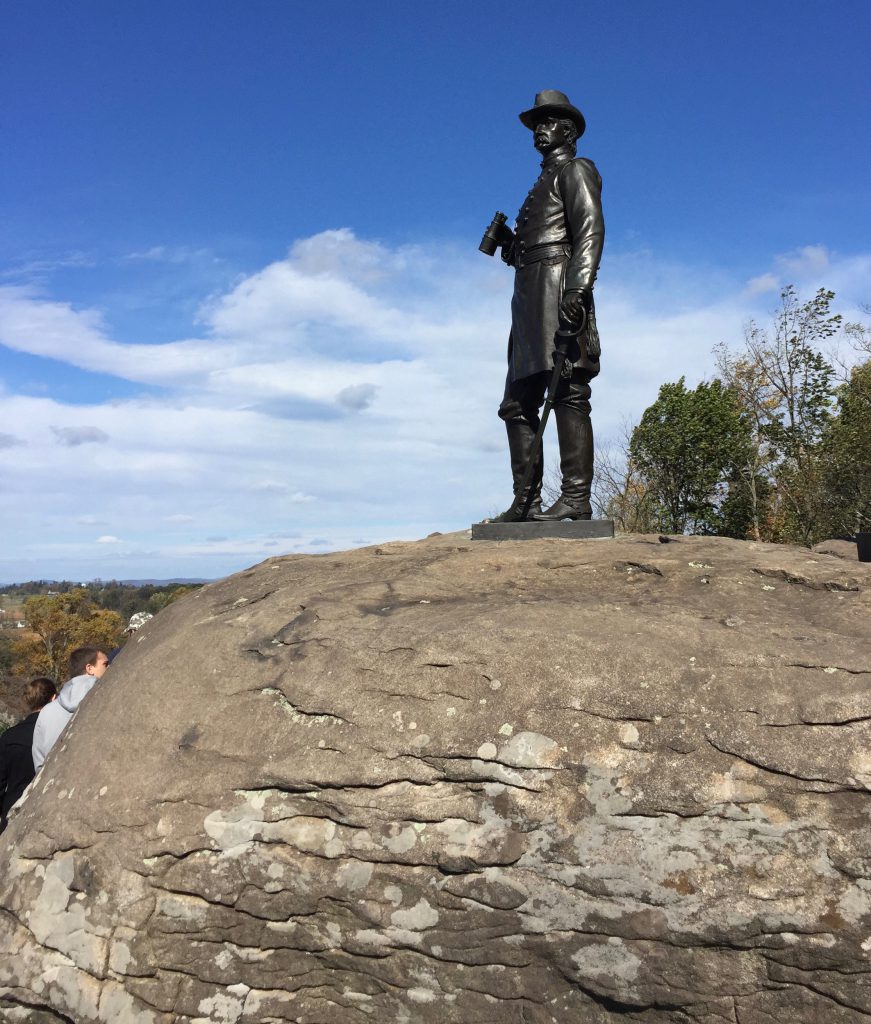 seriously. it was windy. 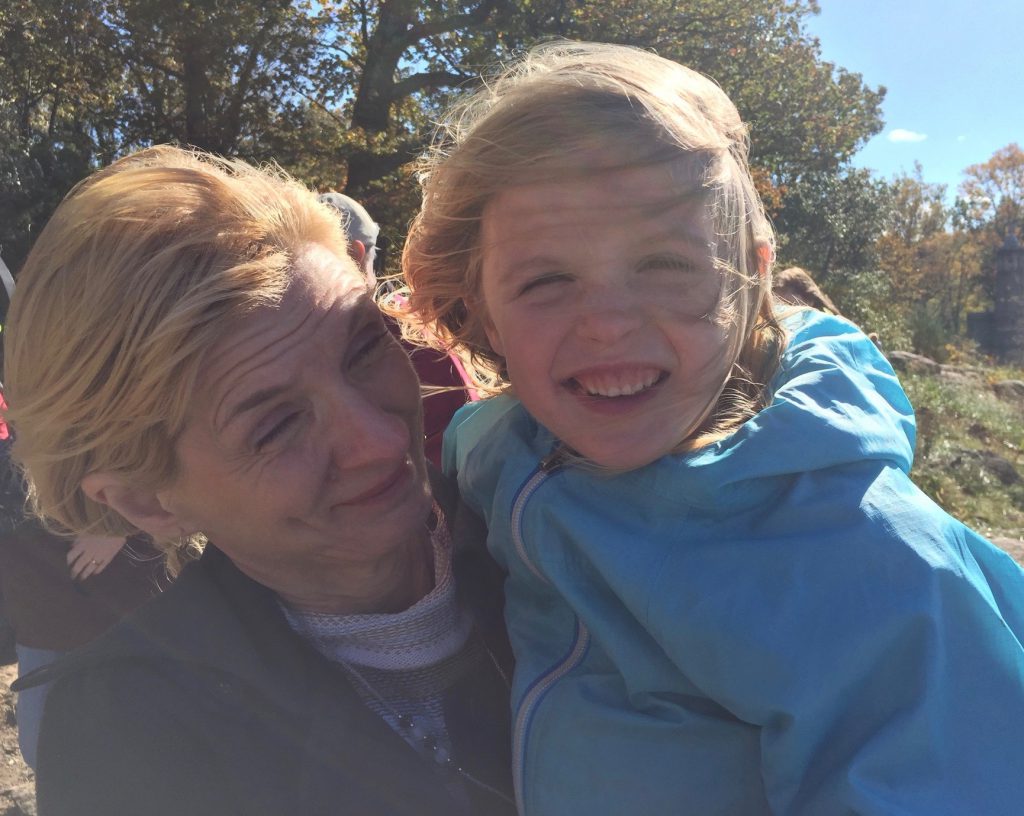 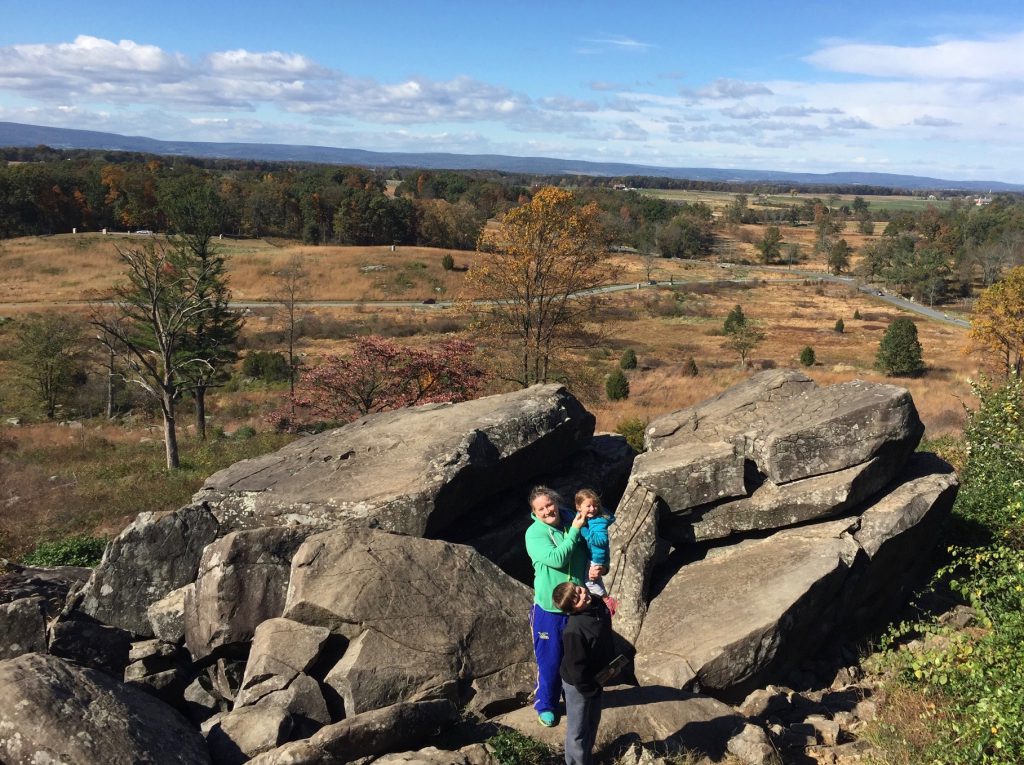 my view from the top. not panoramic. 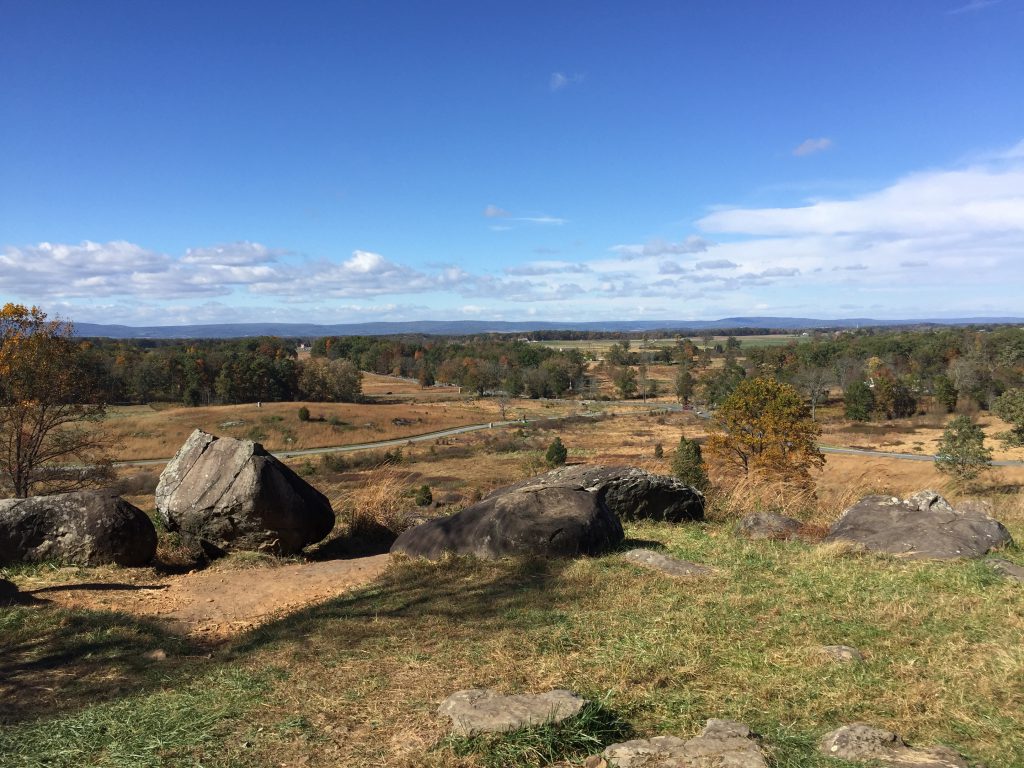 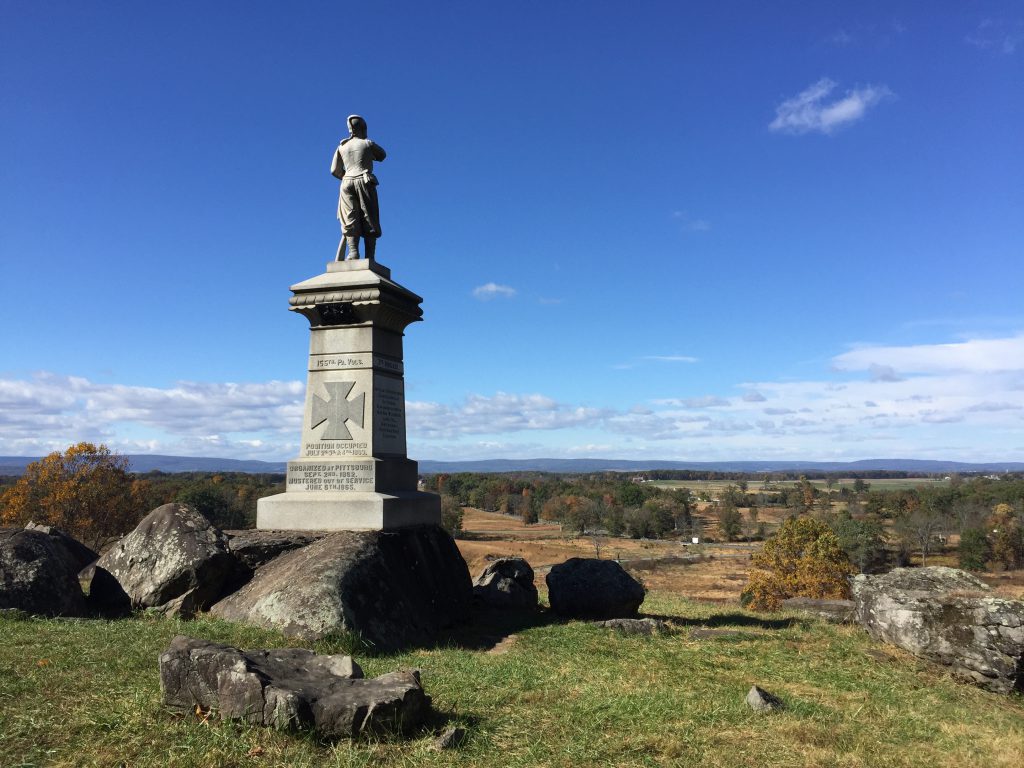 from there, we loaded back into the car and made our way to the pennsylvania memorial, the largest in the park. makes sense, i suppose, being that we are in pennsylvania and all. we climbed the stairs to the top, where it was even more windy. and it was that this location that the wind literally blew hazel over. and when she tried to stand back up, it knocked her over again. like the worlds best mom that i am, i laughed at her misfortune. 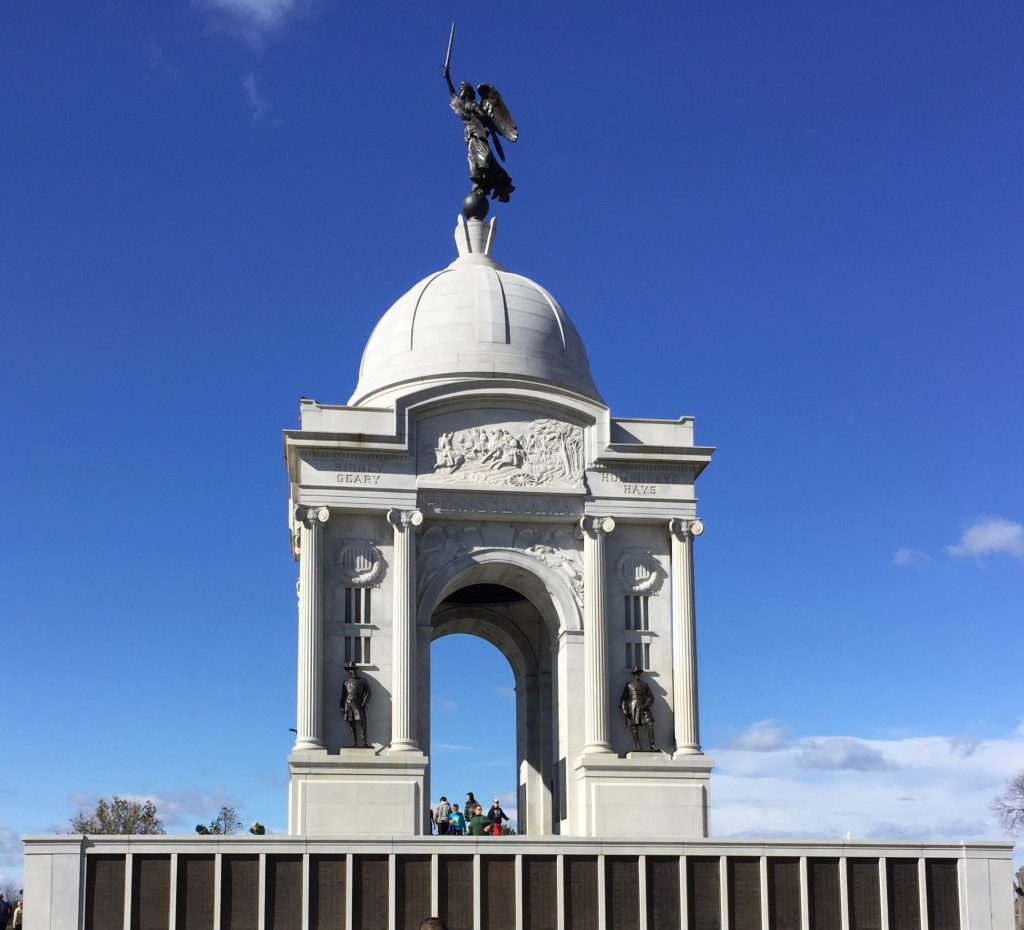 at the top, there were these little plaque sign things, pointing us in the direction of various other cities. 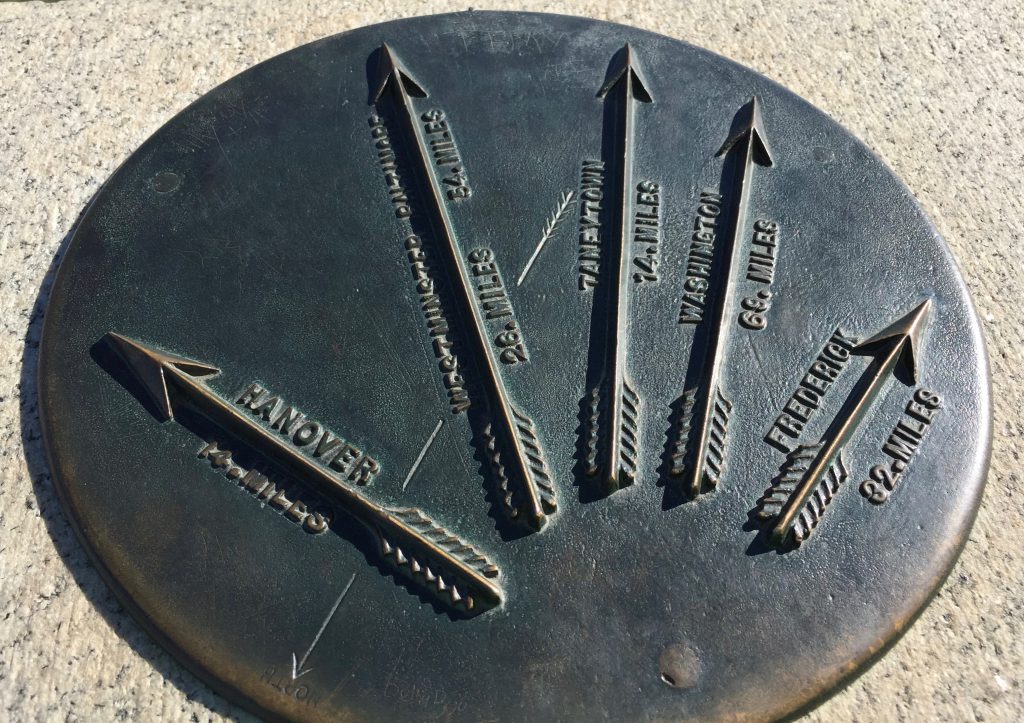 our final stop was at the gettysburg national cemetery. 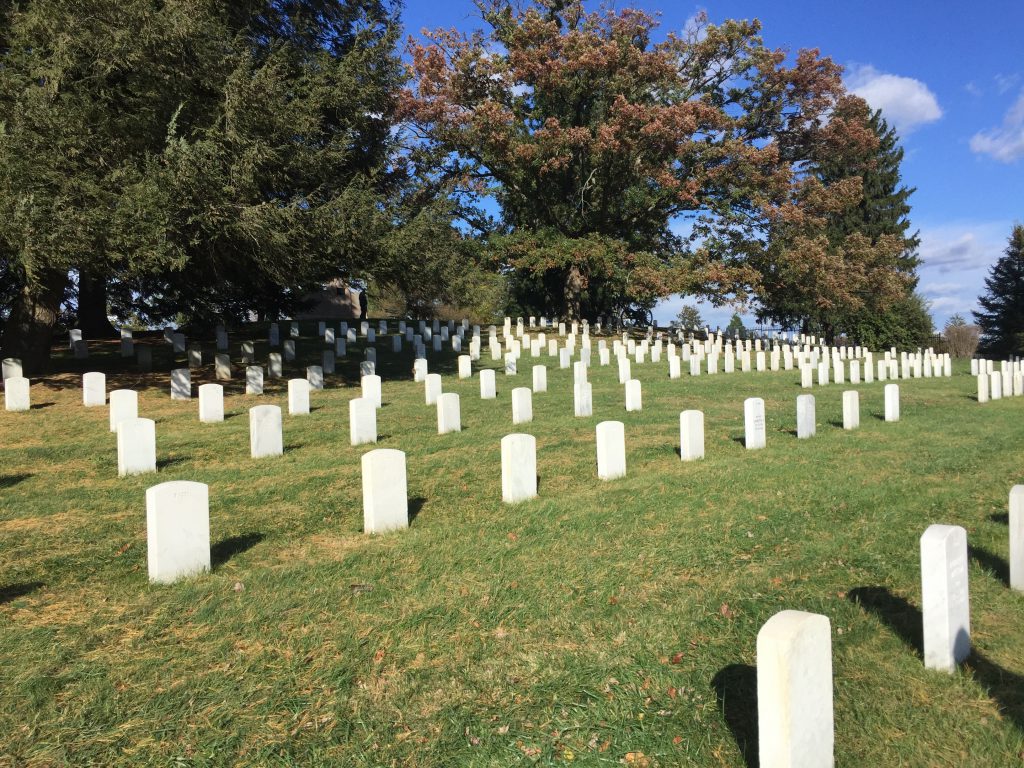 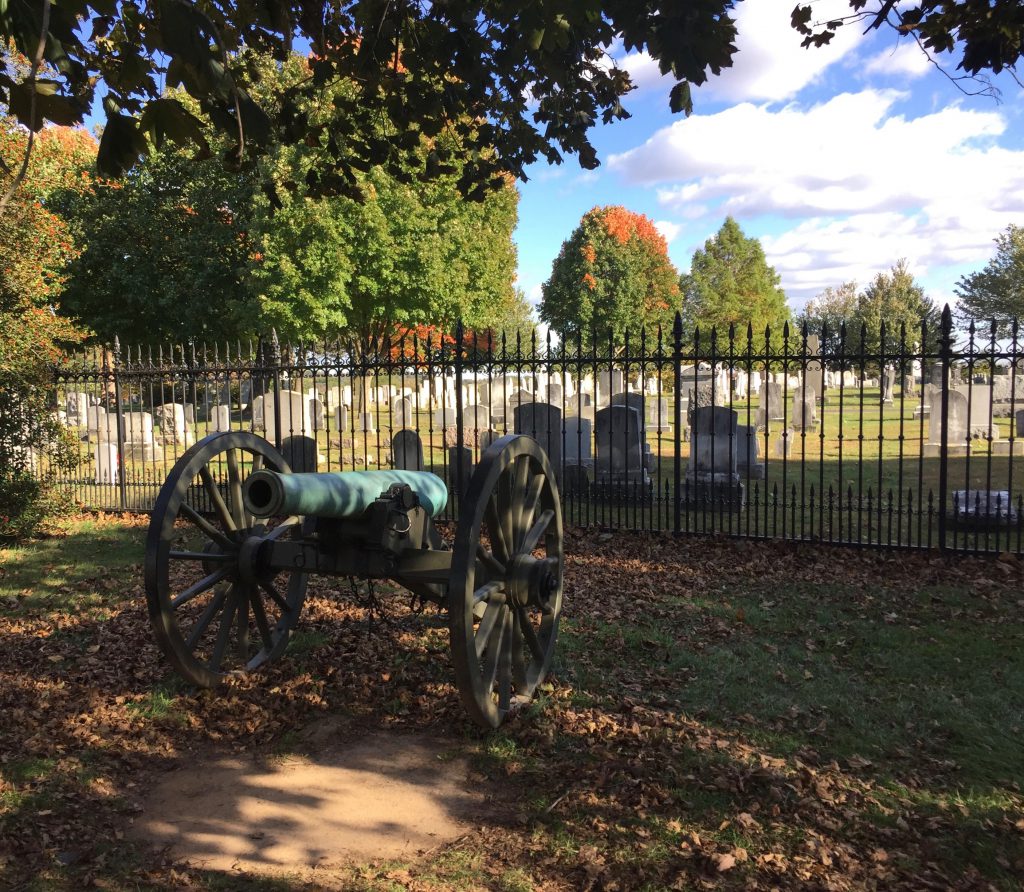 big monument. (i do wish i was able to spend more time reading the monuments and learning and stuff. but, with the lidkids and the weather as it was, we were a little rushed.) 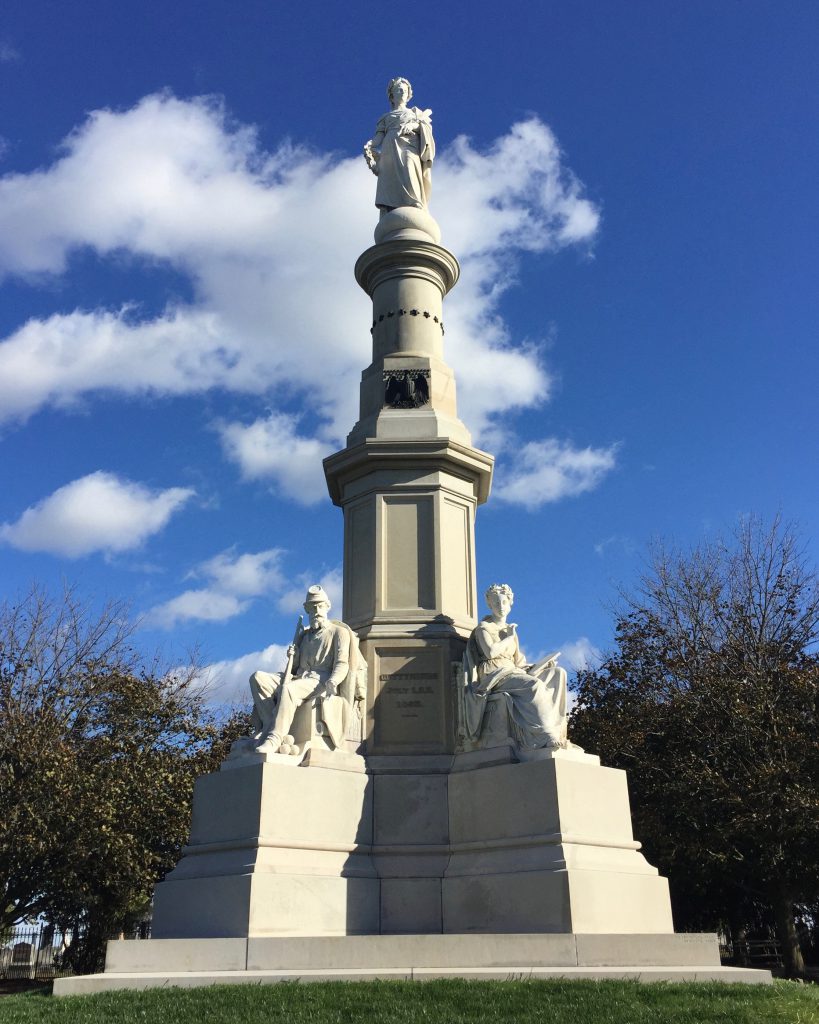 the location of the gettysburg address. 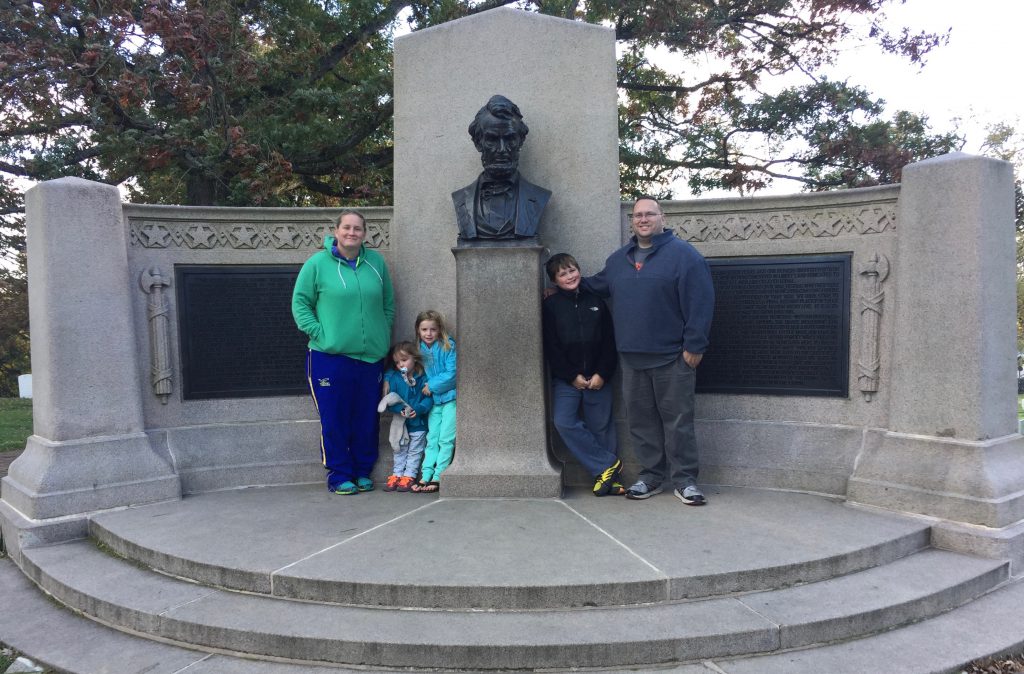 we went back to the visitor center so the kids could get sworn in as junior rangers. first up, ike, who got a really cool ranger who was very serious about the process. 🙂 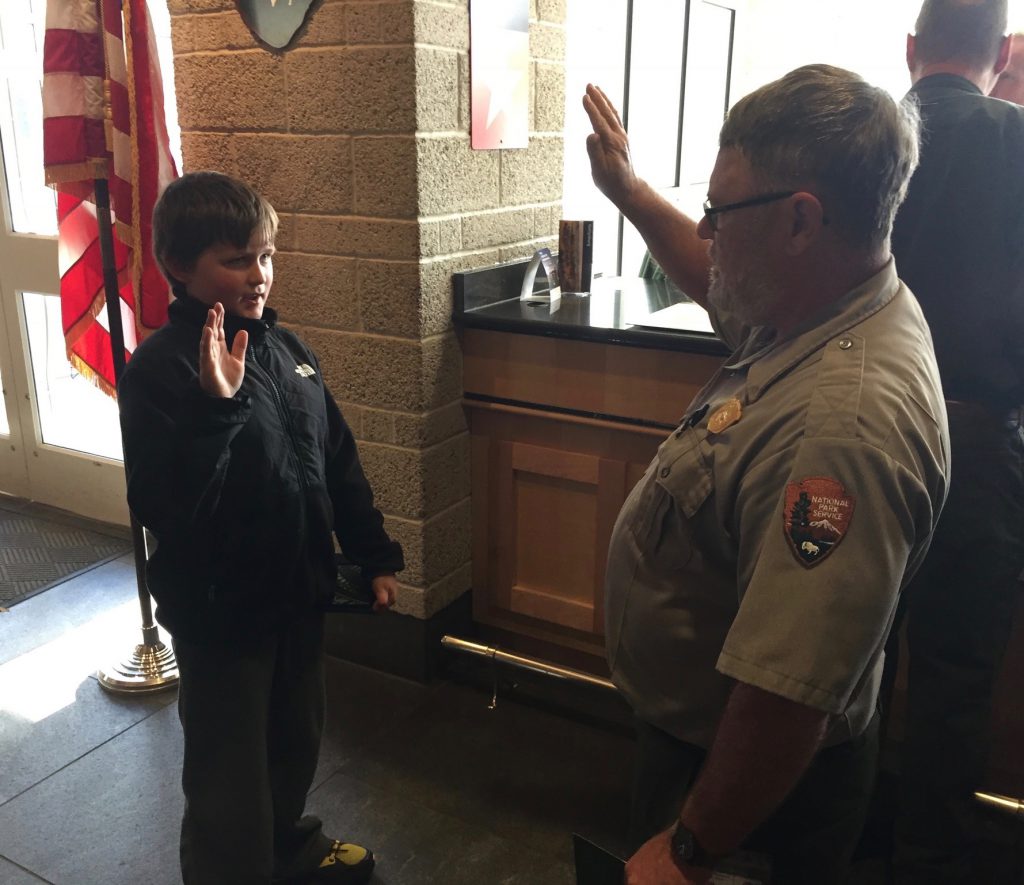 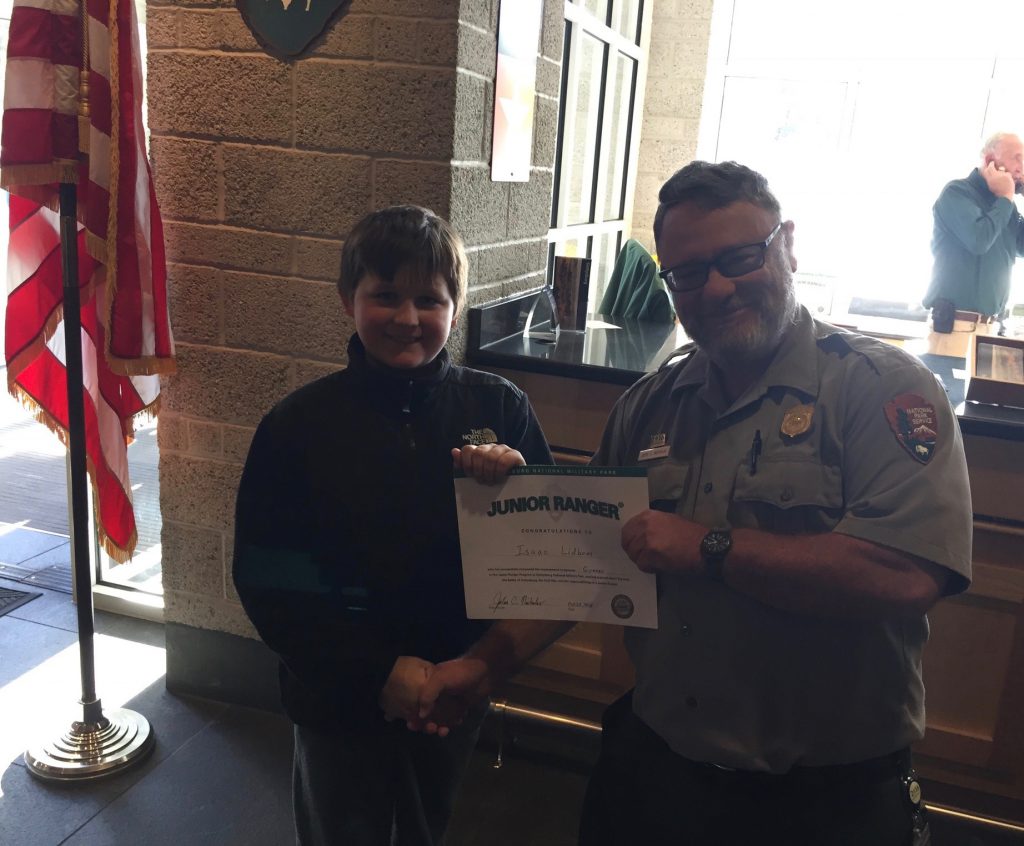 and then anna. her ranger understood that she was painfully shy and let her come behind the counter so that no one could hear her taking her pledge. derek stole this pic by faking a selfie. 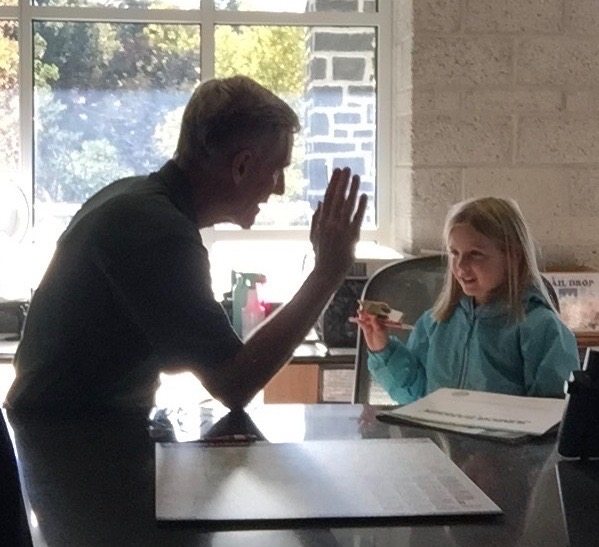 we were starving, so we grabbed a fantastic dinner at the “gettysburg battlefield fries and cafe”. it was a weird little place, but soooo good. 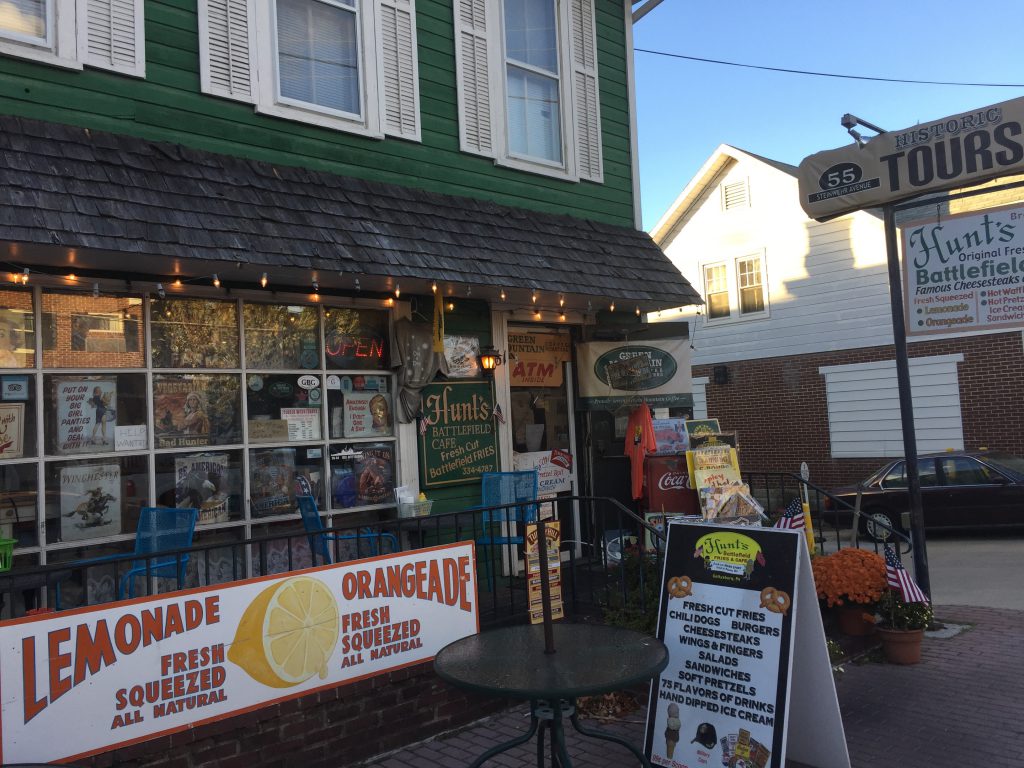 evidently, these are battlefield fries. a bucket full, at that. 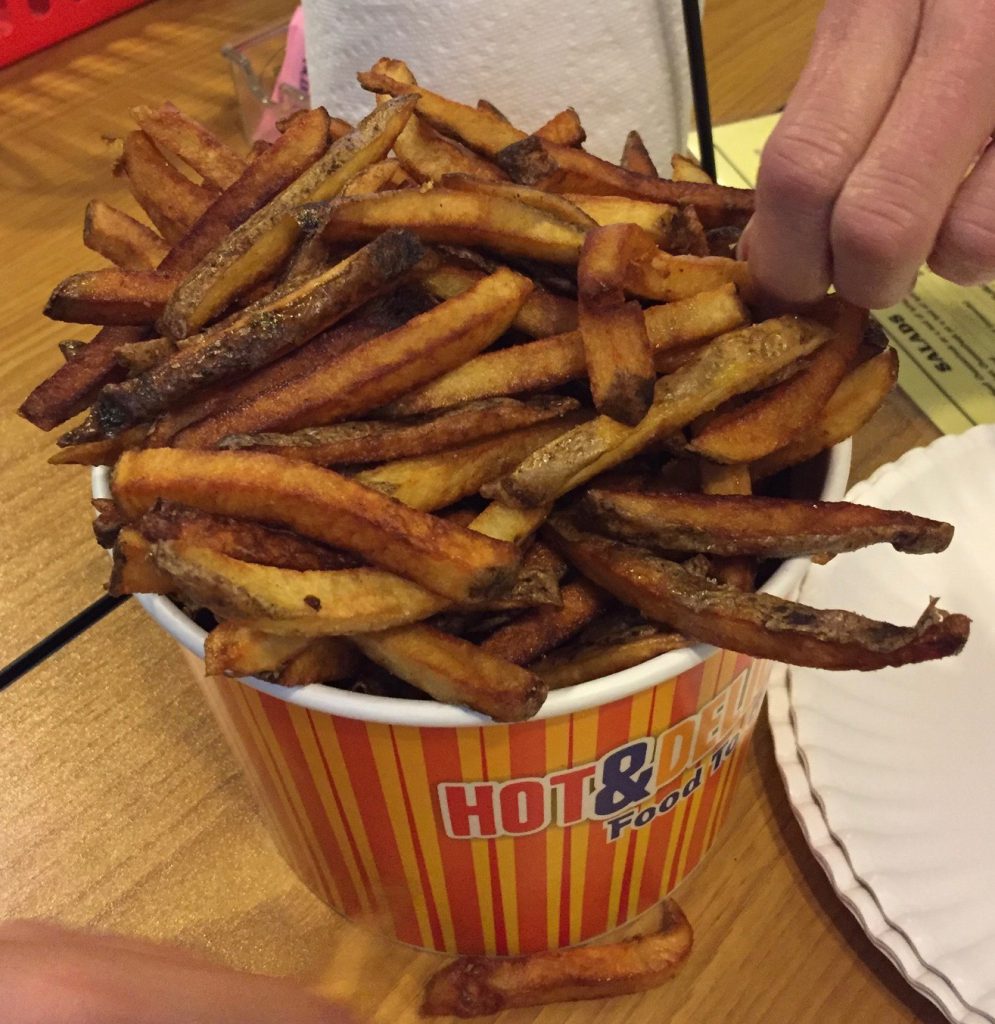 and i’ll leave you with this pic. of anna, gnawing at a chicken tender on a fork, while completely engaged in reading her kindle. doofus.

and. that’s the story of our day at gettysburg. the end.