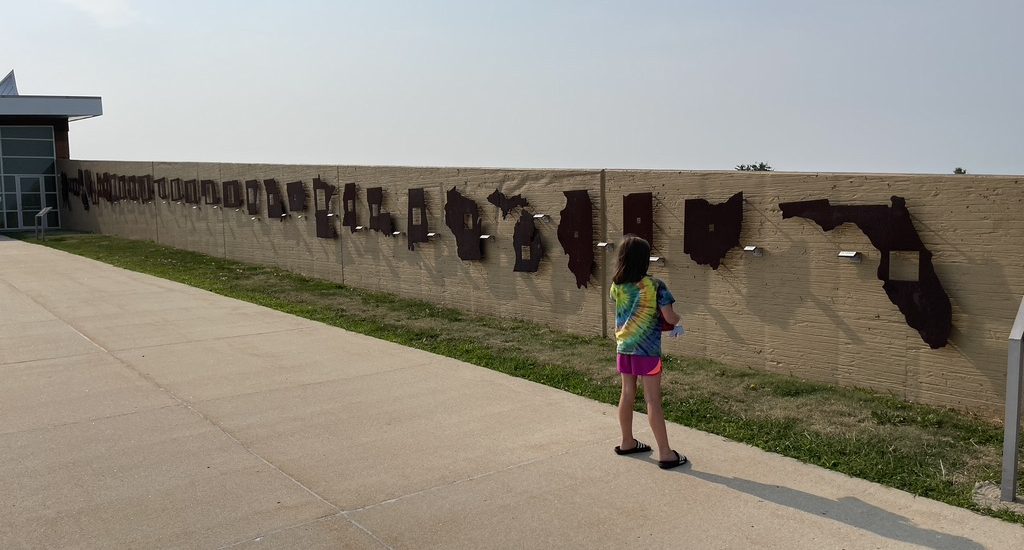 after rocky mountain national park, we stayed a few days in denver, catching up on laundry, groceries, and visiting a few friends. and then we started the long trek back home. originally, we had planned to take our time getting home, with several longer stops through the midwest, but as covid picked up, especially in the midwest, we decided that it might be best if we didn’t spend quite as much time as originally planned. not to mention, some of the things we had scheduled for were shutting down again. so, we hustled home, with layovers while derek worked and i found things to do with lidkids.

first up. lincoln nebraska and the homestead national monument.

just outside the museum part of the monument, theres an original one room school house, that would have served many purposes to the community of homesteaders in the region. they would have had (obviously) school there, but also weddings, town meetings, social events, and more. we stopped there first, because it closed earlier than the museum, and checked out the old textbooks, and wrote on the chalkboards, and bounced questions off the on-duty ranger.

then. back to the main visitor center and museum. homestead national monument does a good job of talking about both sides of the homestead act. that it provided massive opportunities for mostly white settlers as they claimed their “free” land. but that the free land was actually being used by native americans and the homestead act was devastating for those tribes. this photo gives an artistic representation of how much land in each state was settled by homesteaders.

this photo speaks for itself.

the museum inside was chock full of artifacts (possibly refabricated?) and information. the interactive displays kept the kids interested, and their junior ranger books did a good job of keeping them engaged.

outside, we got to check out a little one room cabin that would have been basically a mansion for a lot of homesteaders.

there were traditional quilt blocks on signs posted all around the monument property. this was one of my favorite parts. we saw the star near the school house and the log cabin next to the cabin. the corn in the background is just a little chef’s kiss from the state of nebraska.

the kiddos racked up another junior ranger badge and we were on our way.