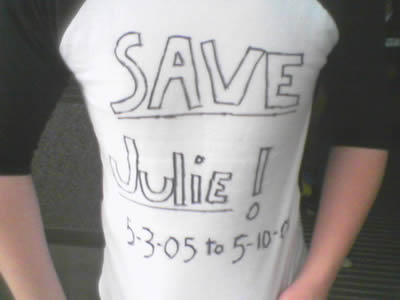 My sister Julie began a 5 day suspension today. She “slapped” her teacher.

It’s an absolute joke in very many ways.
First of all, she apparently had a pretty friendly relationship with this teacher (who will call Mrs. Corbelli for non-privacy purposes). She was joking with her on Friday and playfully (in jest) slapped her. Realizing the possibilities, Julie quickly apologized for her “slap” and Crazy Corbelli seemed to accept.

Well, I guess over the weekend, she realized that Julie was possibly a violent threat to her well being, because on Monday, she wrote Julie up for the alleged “slap”. She even attached Julie’s letter of apology that she had originally intended to “laminate and hang in her office”.

Julia Rogers (Batavia High School’s Assistant Principal By Nepitism), Paste-Eating Corbelli and Julie and my parents met today, to try and figure out if Julie can finish the year in this classroom (or if she’s prone to slap again).
Julia Rogers’ incompetence and indecisiveness resulted in: (surprise!) no decision and a “trial” with the superintendent next Monday — after the suspension will have been served.

So, as it stands now, my sister, who has not a blemish on her high school career, will go down with a “violent act against a teacher” suspension on her record, because of an unstable teacher, who wants to have fun in her class, but expects 16 and 17 year olds to figure out where her “line” is — and if they don’t she’s up for ruining their academic standing. (She’s allowed them to call her a “whore” in the past, so I wonder how Julie might have arrived at the conclusion that a playful slap would be well within the bounds of acceptable interaction)….
I haven’t been teaching long, but I have figured out that if you want to have a “fun” classroom, kids will cross the line. And it is completely unfair for me to pretend it’s ok and call a principal THREE DAYS LATER.

These are the teachers that infuriate parents and give the rest a bad name.

Ironically, yesterday, I had a student hit me in the leg when I attempted to steal an m&m from her. I think I’ll write her up tomorrow. After I get over the shock.