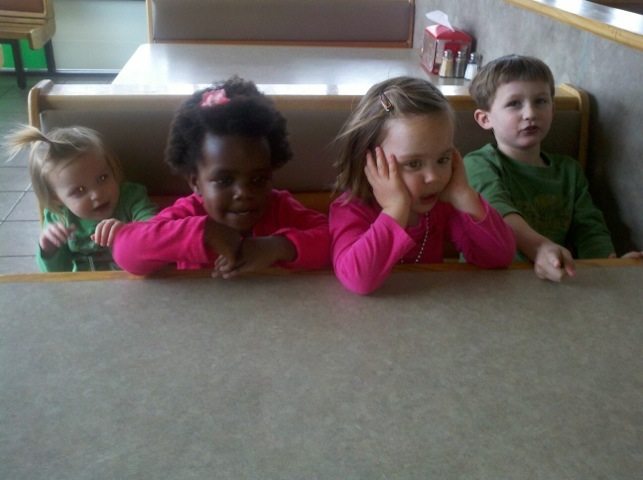 the weather has been pretty mild here in the carolinas this almost-winter… we’ve been out to the park twice in the last week.

i didn’t get many pics of the kids at the first park. mostly because it’s got a ginormous two story play structure that my kids seem to have very little fear of, so i spend a lot of time trying make sure i can see one or both of them. i did catch this pic of anna, looking like she was ready to brawl.

today, we went to the park with my friend heather, who is the parent and aunt of three of ike and anna’s friends, maya, livy and kessler.

anna, testing out the bridge.

(anna is much easier to capture a picture of. ike seems to be on the go. and he wandered off for a good amount of time with some other boys his age to throw rocks off a bridge. boys.)

ike, “telling a story” to anyone who would listen.

we went to (super) mario’s pizza afterward and heather managed to capture this shot of all the friends (minus kess, who was still working on his pizza, i think).

i’ve been feeling like my blog has been slack-tastic lately.
well, at least on the family front. i’m good at posting pics of things i make. so, i’m hoping to start blogging about the lidkids some more. especially poor anna, who will probably be really jealous when she grows up and sees how much i posted about ike and how little i’ve posted about her.

that said, the next post will be about something i made yesterday. 🙂