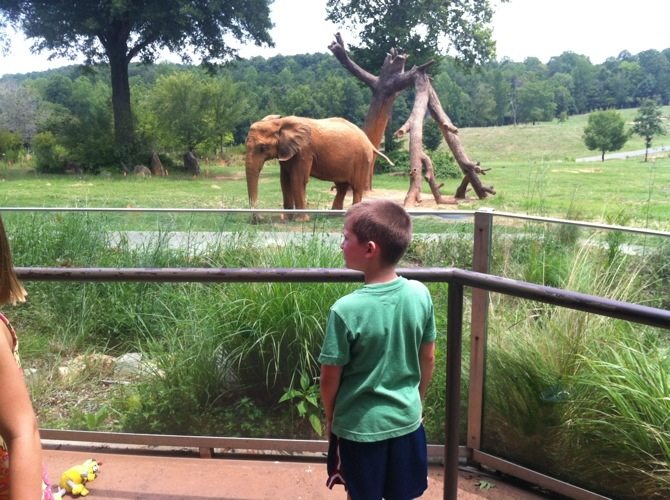 we’ve had zoo on our summer to do list last year and this year. last year, we never made it. this year, my old college roommate and hoops teammate invited us to go, and we really had no choice but to pack up and go. and that’s the story of what we did today.

we started in north america and the turtles and alligators and such. anna loved the turtles. they would swim up to the glass, like they were playing with you. 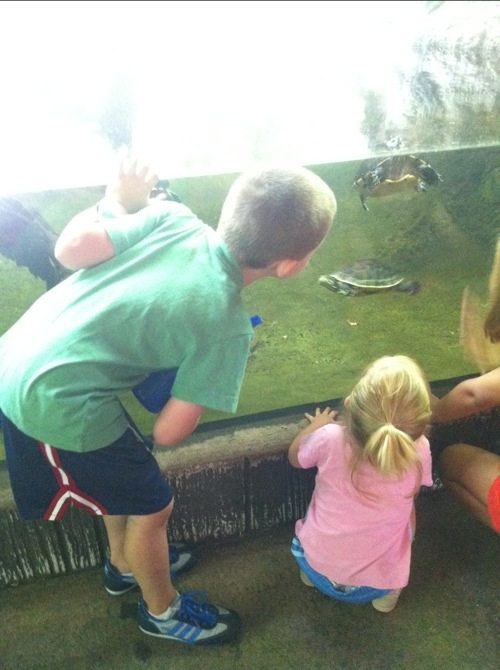 we passed the kidzone, and my climber boy couldn’t resist testing out some of the climbing apparatuses. 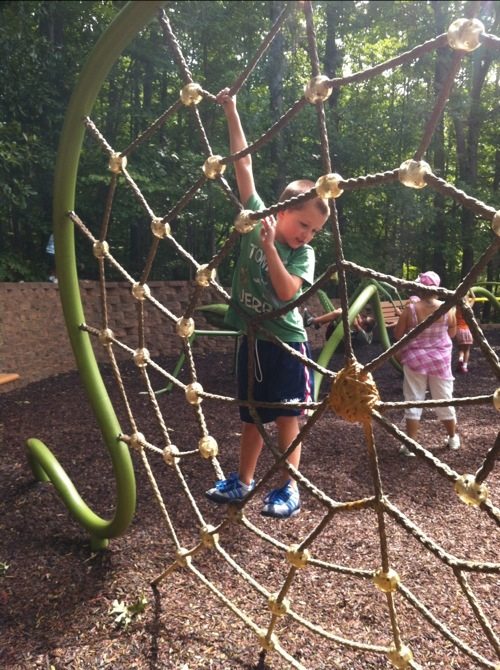 we took the tram to the junction plaza, skipping the long boring walk through the rest of the north america park. of course, there was a merry-go-round, and of course we had to go on it. 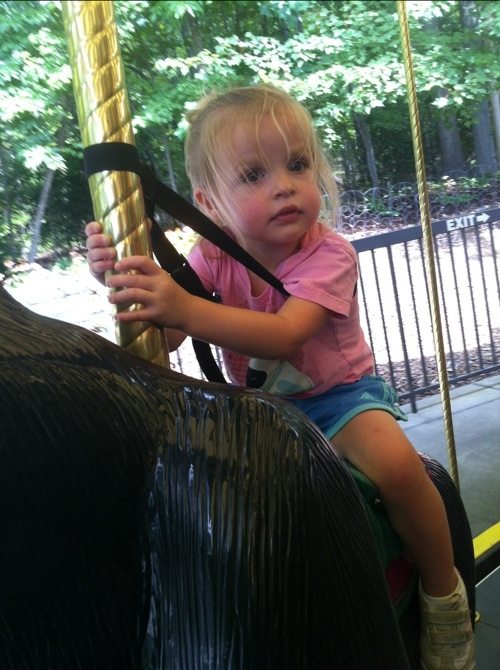 isaac had one of his meltdowns, and wound up not riding. so anna got to ride twice. and i got to glare at him each time we got around to his side. 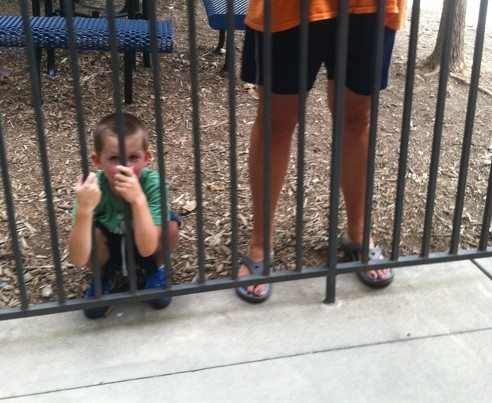 it was already 1130, so we decided to sit and eat our lunch, before we headed out for the african safari. anna ate a zillion oranges. 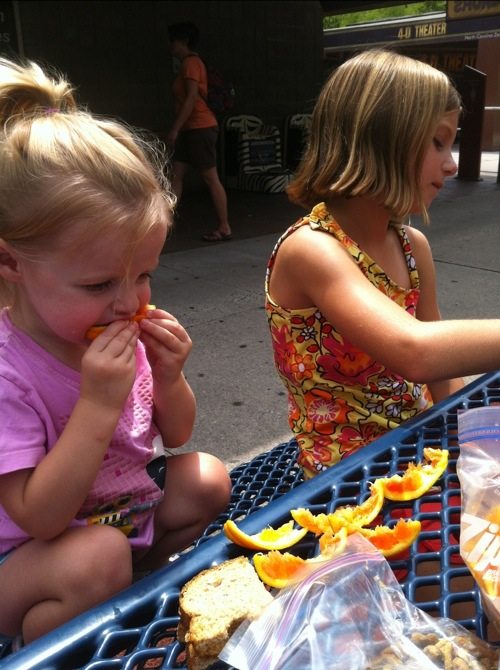 mandy’s younger daughter, kyrah, was my super-helper. she wanted to push anna the whole time, and i happily obliged. i need an older kid around here. 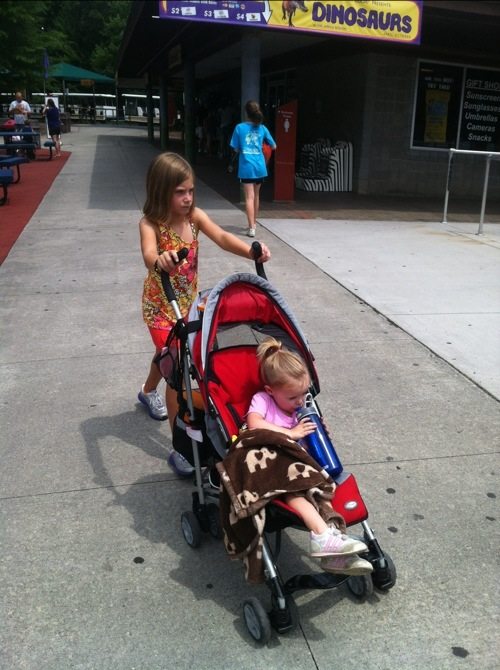 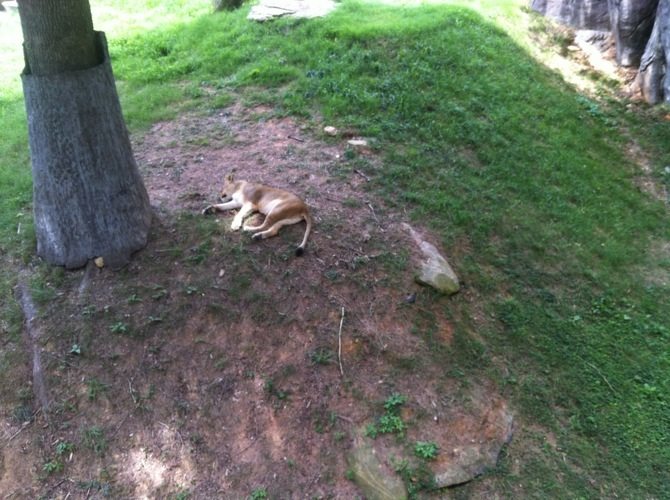 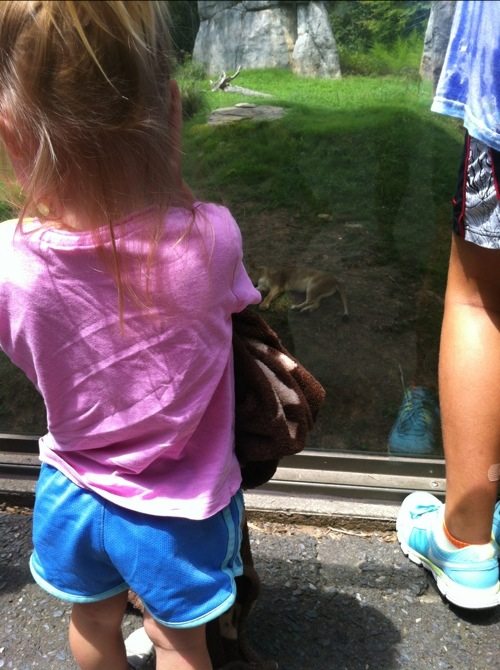 i tried to rustle up the four kiddos for a happy group shot. this was the best i got. seriously. the other pics are ridiculous. lots of pouting and ignoring and grumpiness. 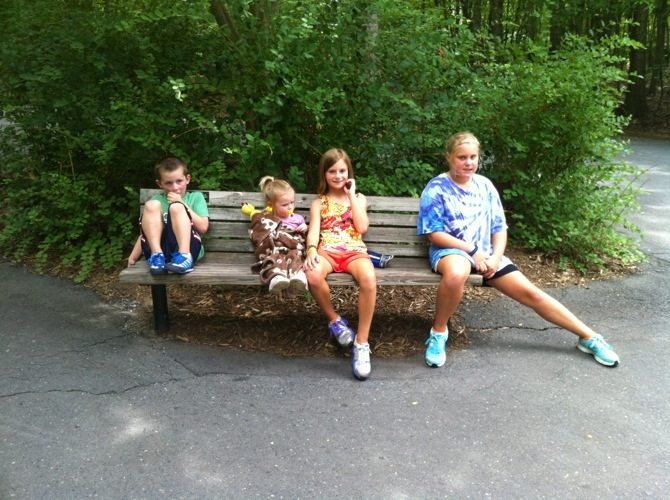 up until now, we hadn’t really seen much. the sea lion and polar bear exhibits were closed. the chimps and gorillas were napping and nowhere to be seen. the lions were just lying around. so, we were pretty excited when we strolled up to the ostriches and they were up close and doing something and we finally got to see some animals in action. 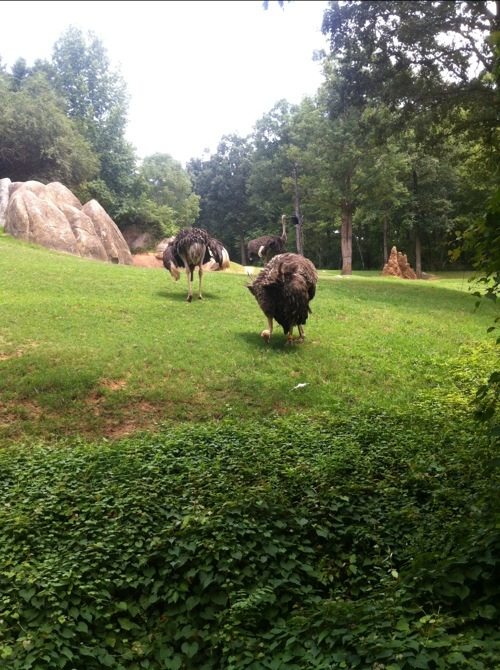 then, it kept getting better. at the next viewing area, we got to see the giraffes and zebras up close and personal. 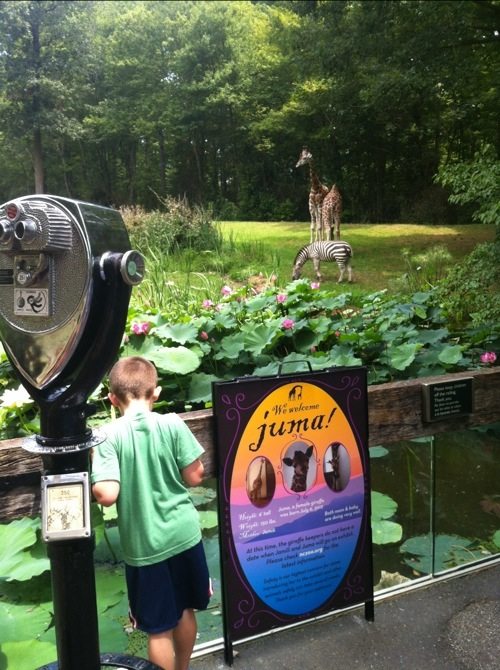 and then, even the elephants. so fun. 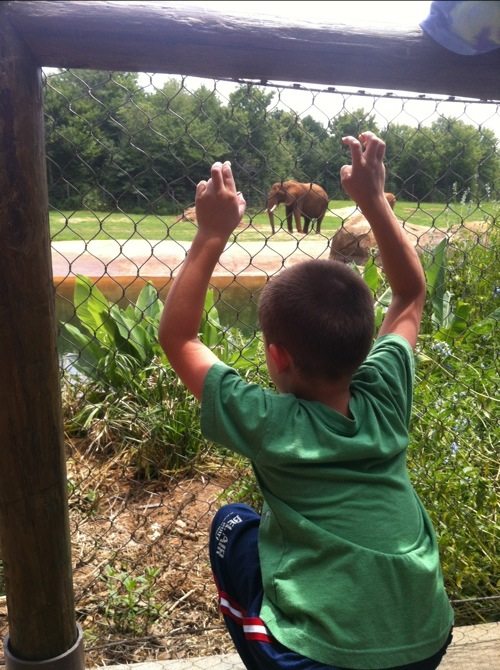 kyrah, checking in with anna. seriously. i need a seven year old. 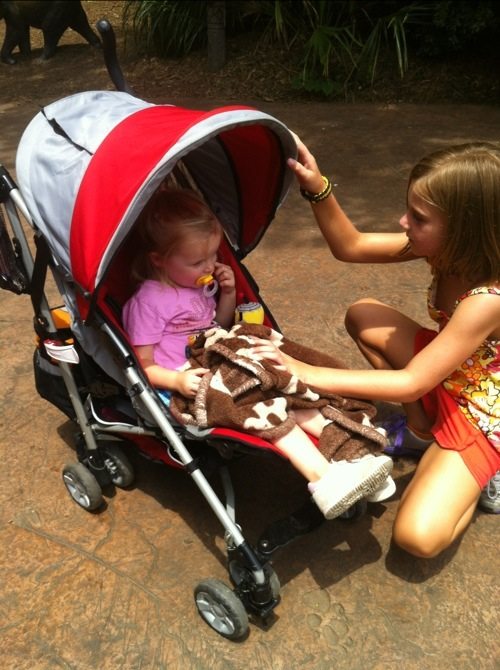 we found another spot, where we were even closer to the elephants.

then, naturally, we stopped to climb all over the brass rhino. 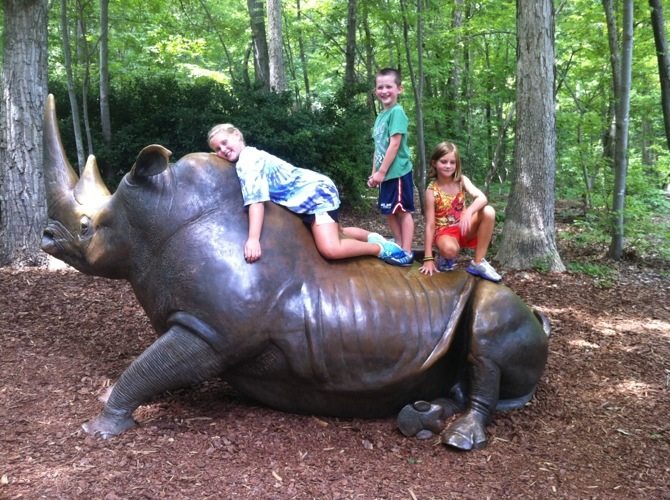 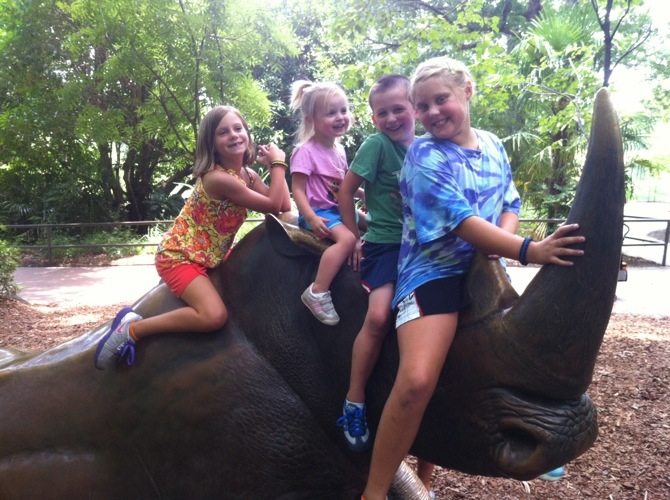 we road the tram back to junction plaza. pretty kyrah sat with anna. 🙂 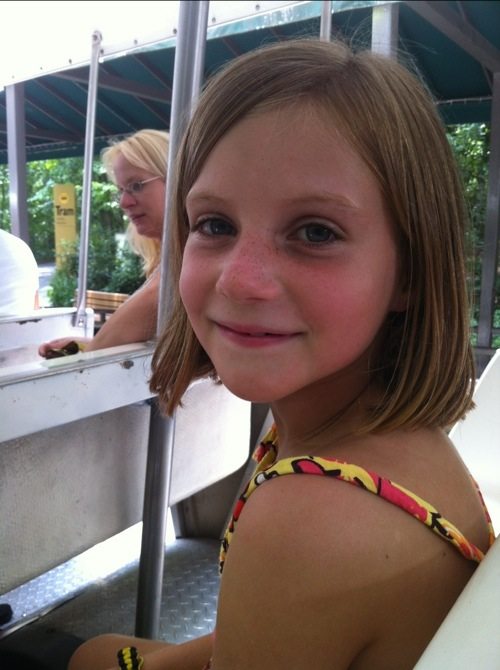 from there, we went to the beekeeping exhibit, and i snapped this pic of the queen bee. a six year old pointed her out to me. i’m so proud. 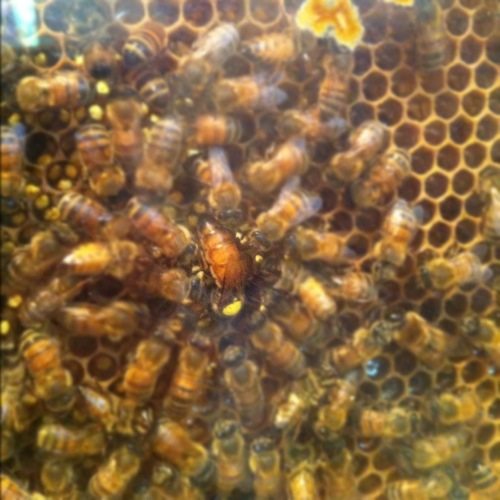 we went to the desert exhibit before calling it quits. the lidkids and kyrah and i took a tram back to north america and the playground, while mandy and her older daughter, kenzie took the long long walk to see the red wolves and bears and met us there.

funny story.
as we walked back to the tram, i noticed isaac staring down some nice folks buying ice cream. at first i thought he was coveting their ice cream. just as i got to him, the man with the cone turned and said “isaac!!!”. it was our pal steve and his son (and ike’s hero), harper. he was there with the fam (including THE kristin boone of kristin boone photography). they rode the tram with us and hung out at the park until mandy and kenz arrived on foot. 🙂

harper showed off his climbing skills… 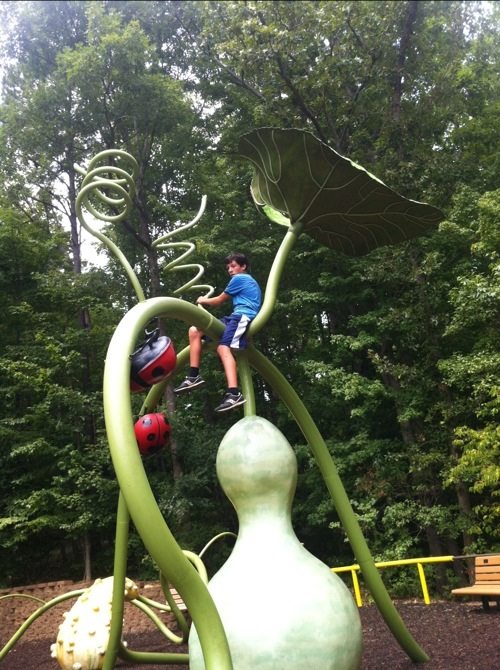 overall, it was a great day. it was hot and muggy and sticky. but, the kids did great. isaac never complained. i thought for sure the walking would get to him. but he was a trooper. even after getting a nasty blister/raw spot on his achilles tendon.

also, we opted for the year membership, so you’ll be seeing more zoo pictures from us in the next 365 days. 🙂