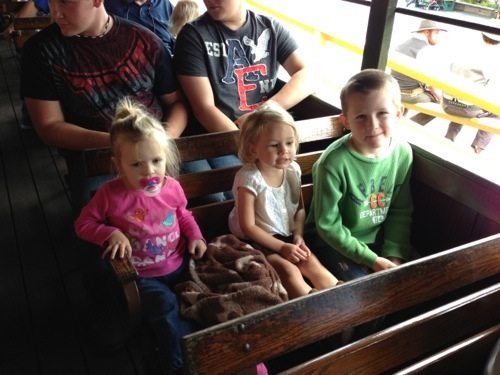 our pal graelyn is turning three soon. to celebrate, a set of her grandparents came to town and they all went to tweetsie for the day on saturday. oh. and we also got invited. it worked out nicely because derek has to work so much, and it gave him some time to work, without feeling guilty, while the kids and i spent his hard earned money on theme park fare, souvenirs, toys and ice cream. 🙂

we arrived to meet the birthday girl’s family, just as they were having lunch, so we joined them…

we loaded onto the chair lift up to the top of the mountain for some kiddie rides and the mouse mine railroad ride.

tried for a group pic at this spider. this was the best one. 🙂

riding the mouse mine train.

we shared a car with these rowdy folks (grae’s family – jess, daniel, ben).

towards the end of the ride, we stopped in the middle of a tunnel, where this was the provided viewing:

guess which kid burst into tears?? (answer at the end).

while ike and i rode some sort of tornado twister scrambler type spinning ride, the rest of the party hit up the deer park and then we made our way back down the mountain. we got to the bottom just in time to climb onto tweetsie for smoky ride around the mountain, with a couple of stops for a decidedly non politically correct reenactment of cowboys, sheriffs and “indians”.

the big kiddos rode together. 🙂

after the train ride, our friends got on the road home. we stayed for some photo ops. this was the best i got of the train. my kids are terrible photo takers.

my kids were melting down a bit at this point. if i weren’t going it alone, i might have forced the issue and made isaac hit a few more rides, to get our money’s worth. but, with anna in tow, and no one to hold her so i could ride some of the bigger rides with him, i called it a day. we went to the incredible toy store down the road and picked up some fun playmobil toys and then hit the road. it was super fun. and super tiring. and. that’s all.

answer. isaac. it was the five year old.