on our second day in sequoia and kings canyon, the weather cleared up, making a perfect day to make the long, scenic drive into kings canyon and do a little bit of hiking when we got there.

we decided to save the scenic overlooks and picture taking for the trip back up, so we could beat any crowds of people attempting to get to the same spot as us. (but once we got down to the river, i could lean out and get good shots of the surrounding scenery). 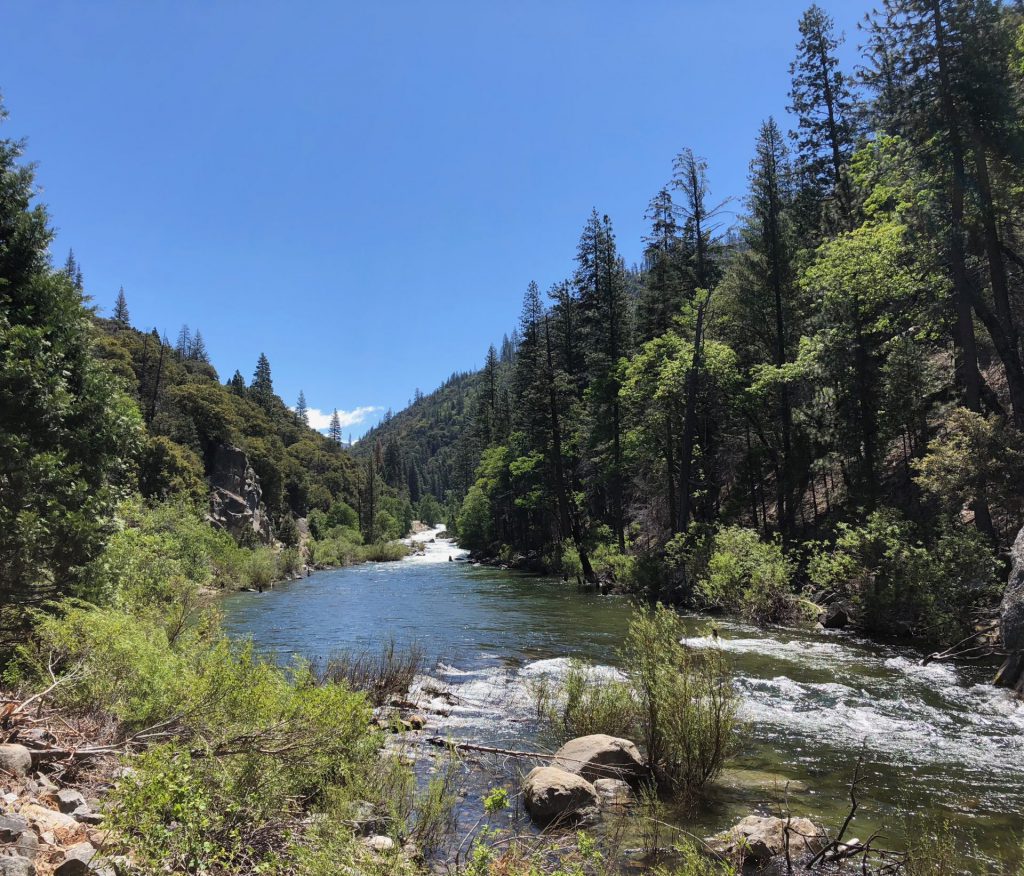 our first stop was grizzly falls. it’s just a little picnic area, with a super short walk up to the bottom of the falls. it was cold in the misty area close to the falls and hazel was not super happy about it. 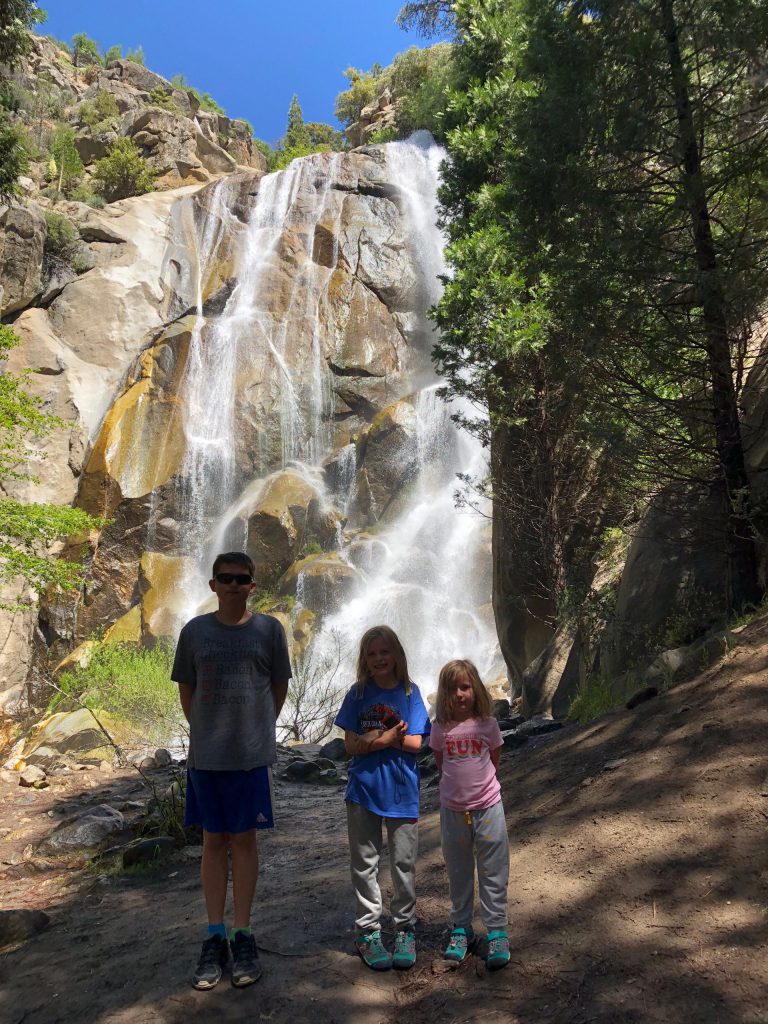 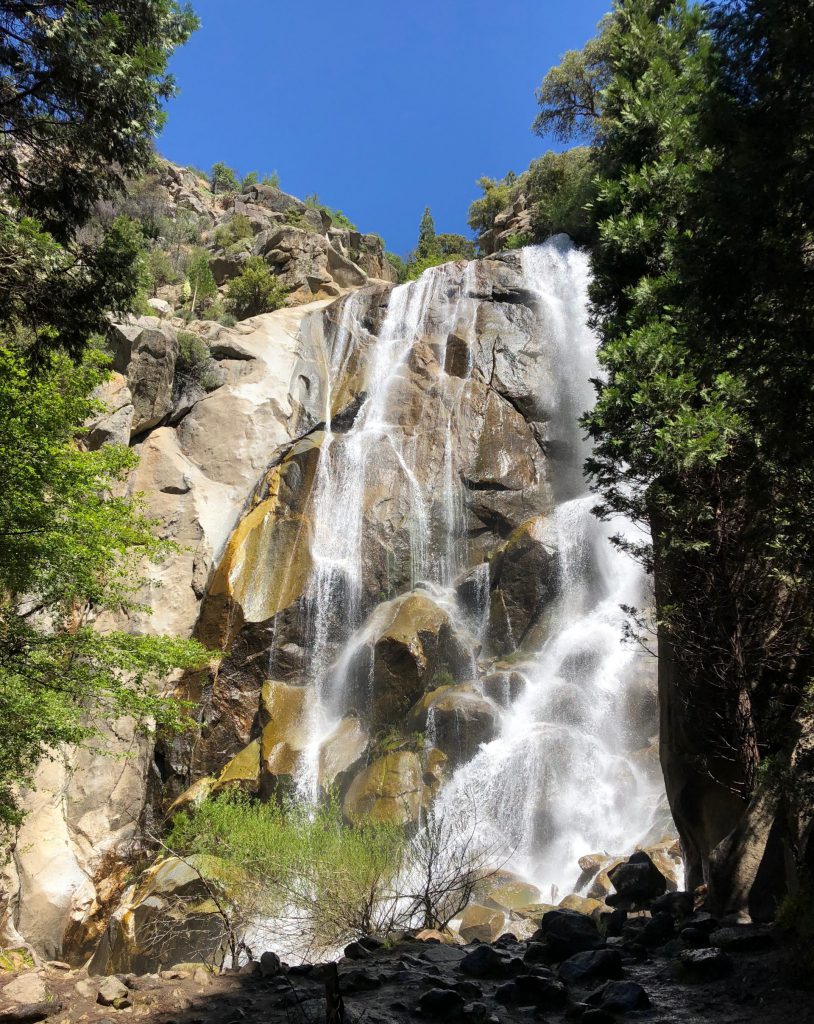 more river shots from the passenger side window. the scenery was breathtaking. 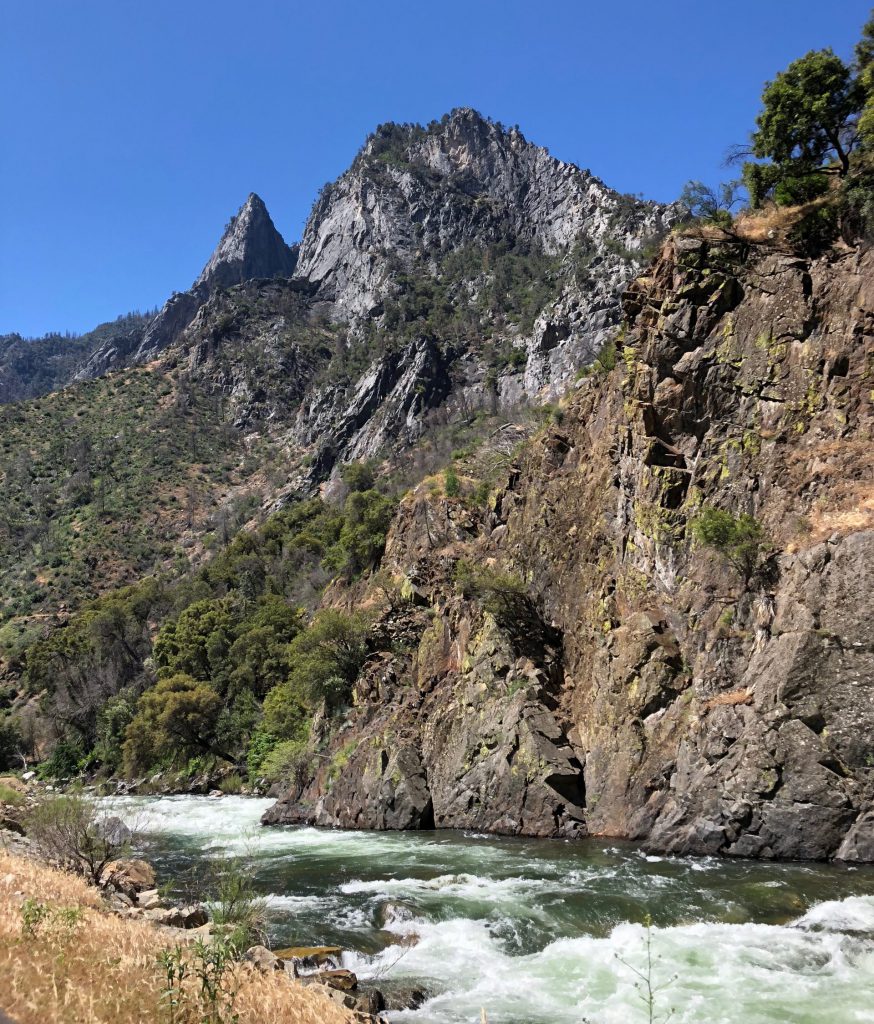 we stopped at the visitor center (shack) and got our necessary info for best hikes and things to do, and settled on zumwalt meadow, where there’s a 2ish (i think) mile hike around the meadow, with more excellent views. the first bit of the hike takes you along the river to a bridge, where we encountered a fun hollowed out tree that only anna was willing to climb into. 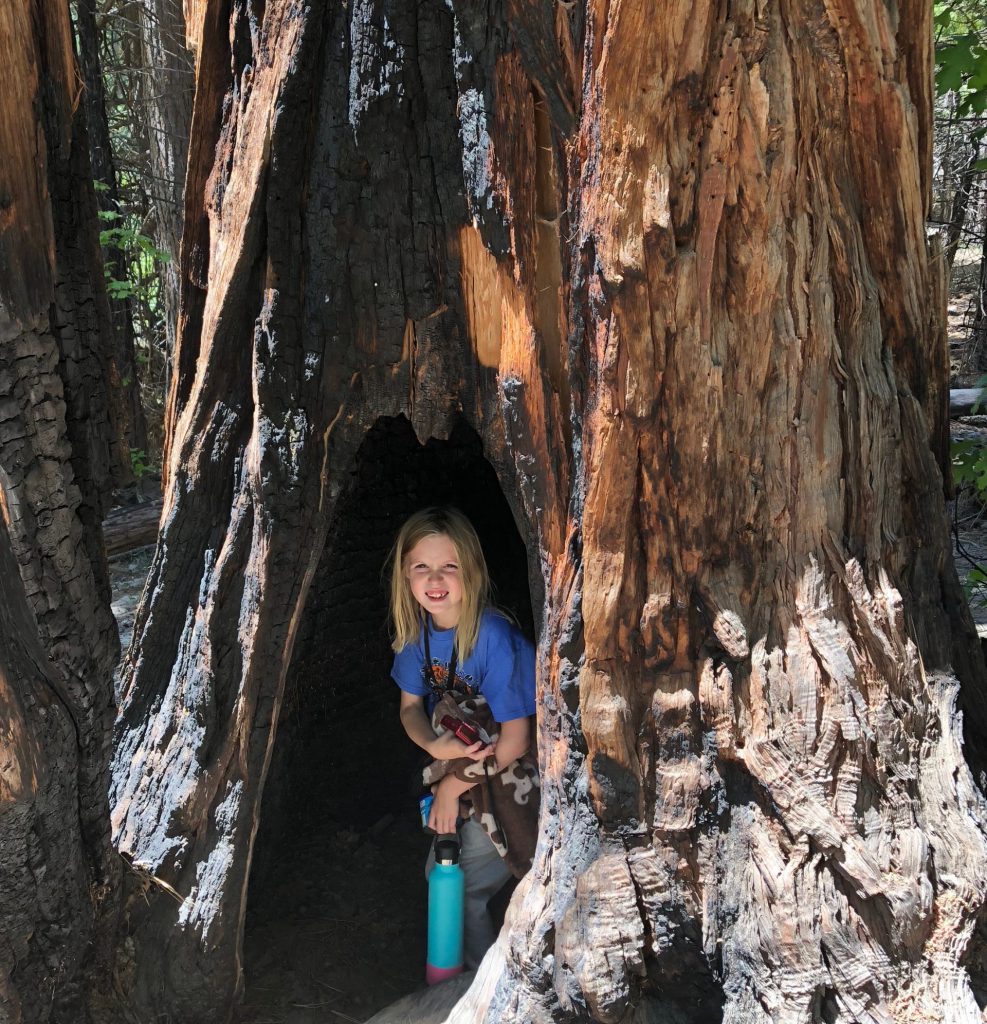 the bridge to the other side and all the good stuff. 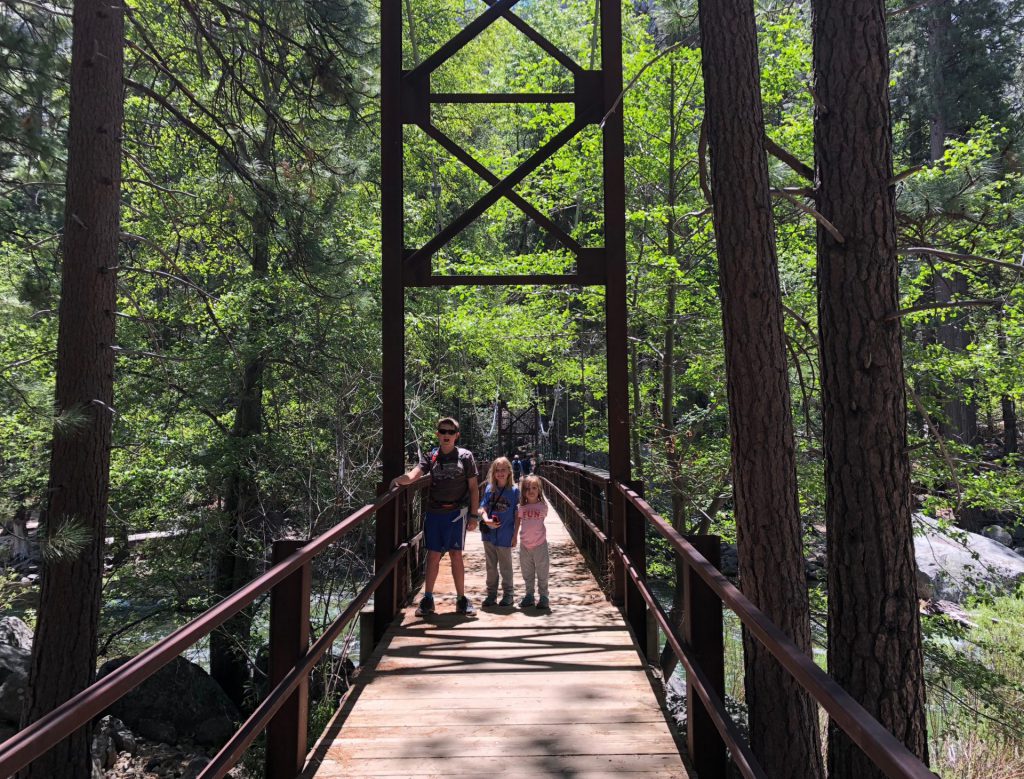 the hike takes you back along the river a little ways and before too long you pop out in a lush green meadow, where all of the fellow visitors are taking millions of pictures. your kids grumble about the people who are walking out into the meadow to get a better shot, despite the signs clearly asking you to stay on the boardwalk. 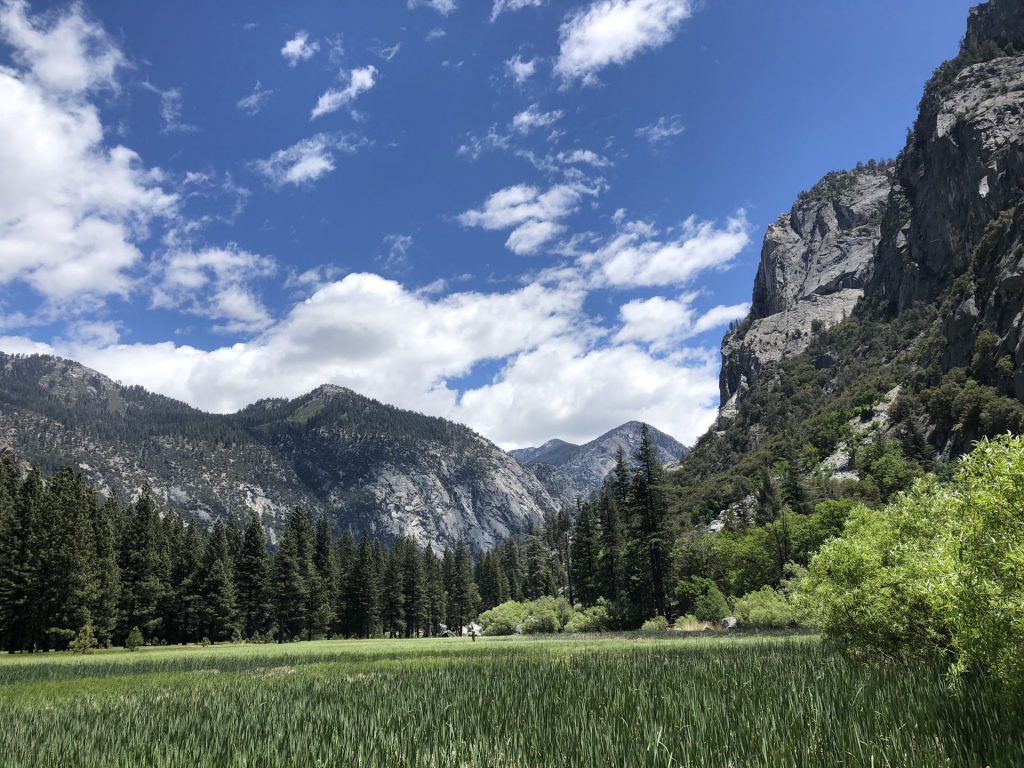 i joined the masses in taking a million pictures, even though they all end up looking mostly the same. 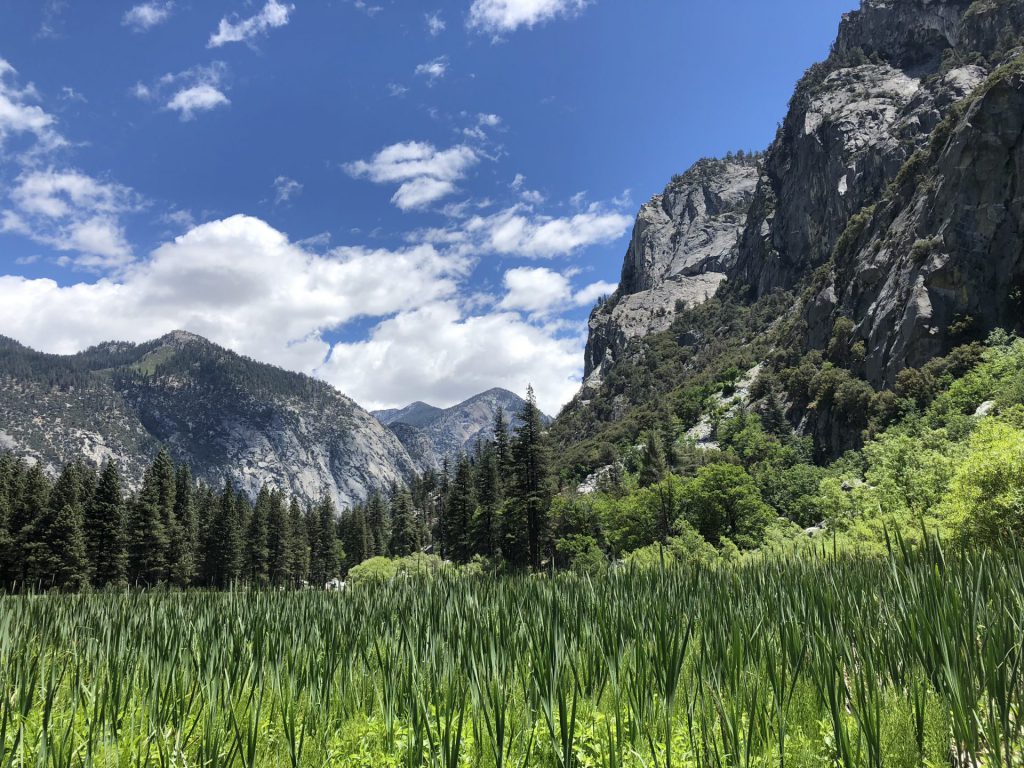 lidkids in the meadow (but safely on the boardwalk). you can see the trampled meadow behind us because humans are jerks. 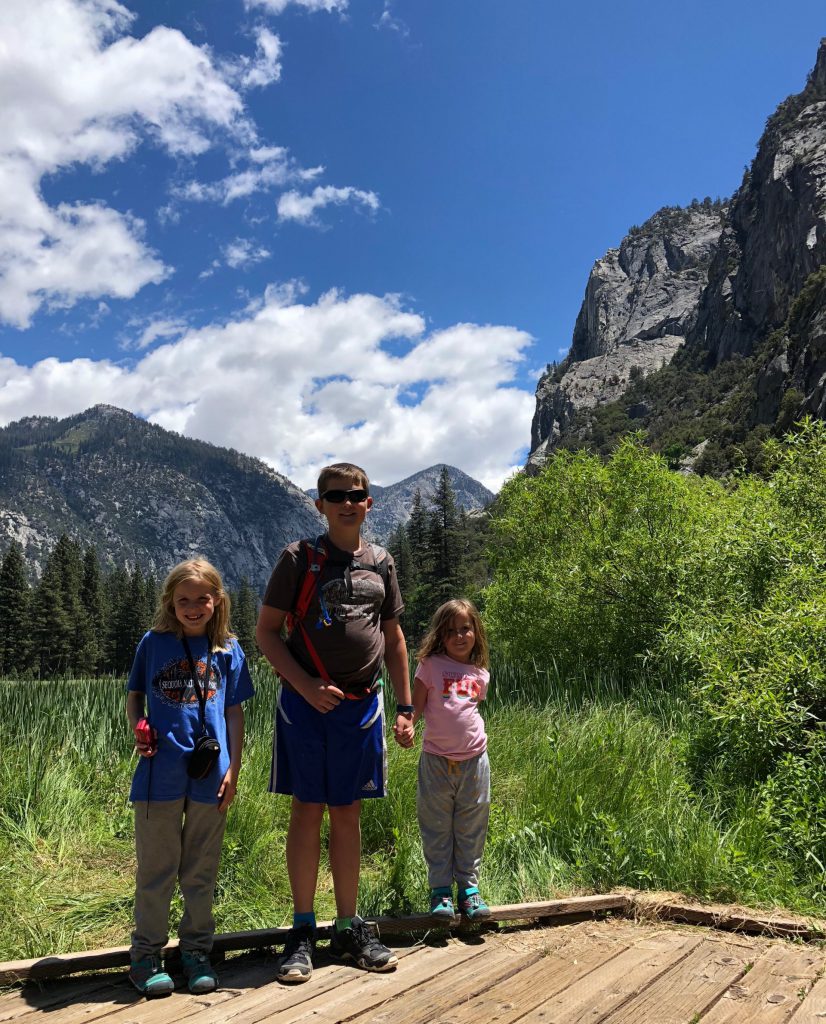 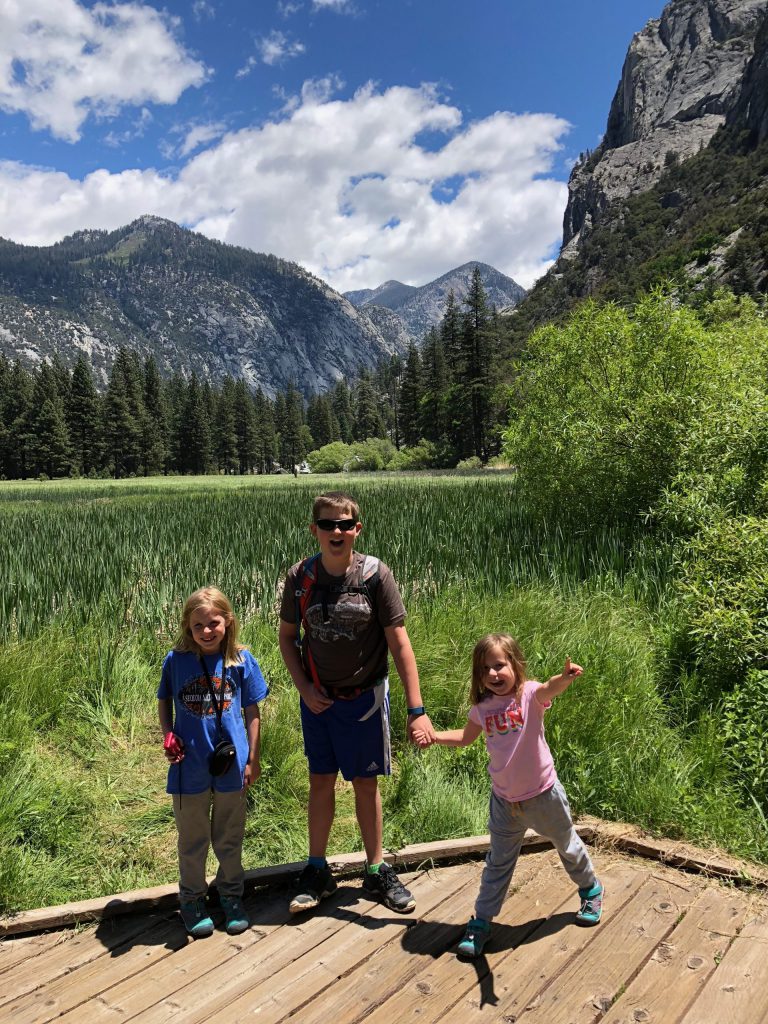 from there, most people just walked back to their cars and went to the next pretty spot. we walked on, and the trail was way less populated and we were back in our element. a few hundred feet away was another little spot to sit and take in the pretty meadow. 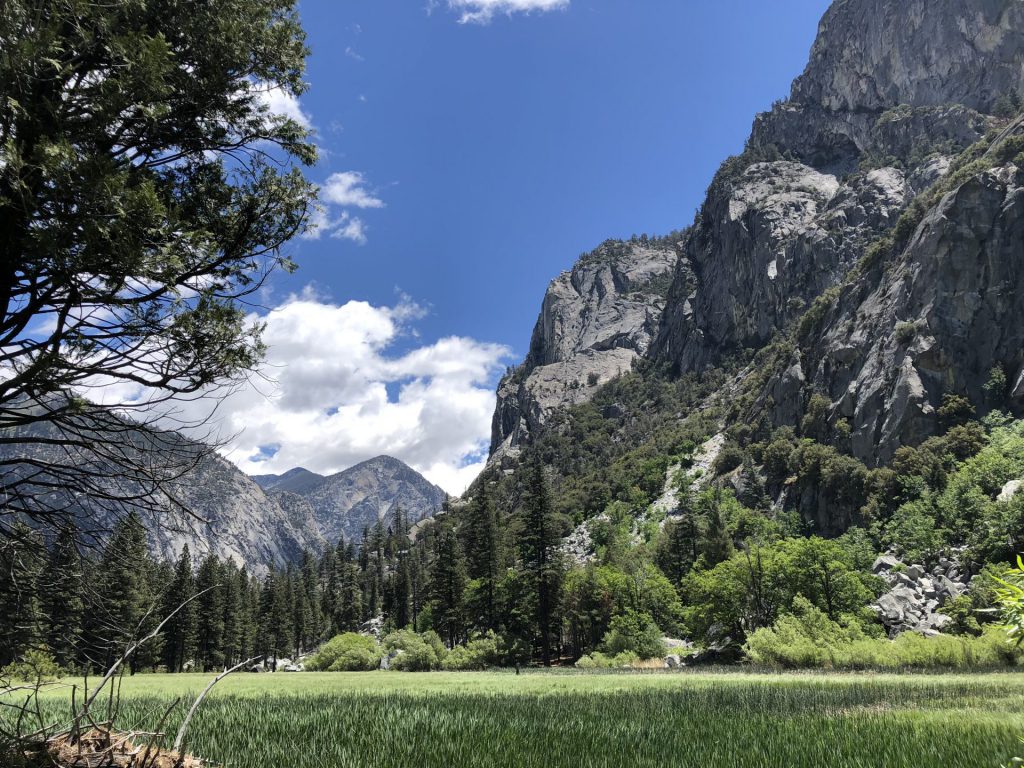 we sat for awhile and chatted with some fellow hikers about our travels (and theirs). 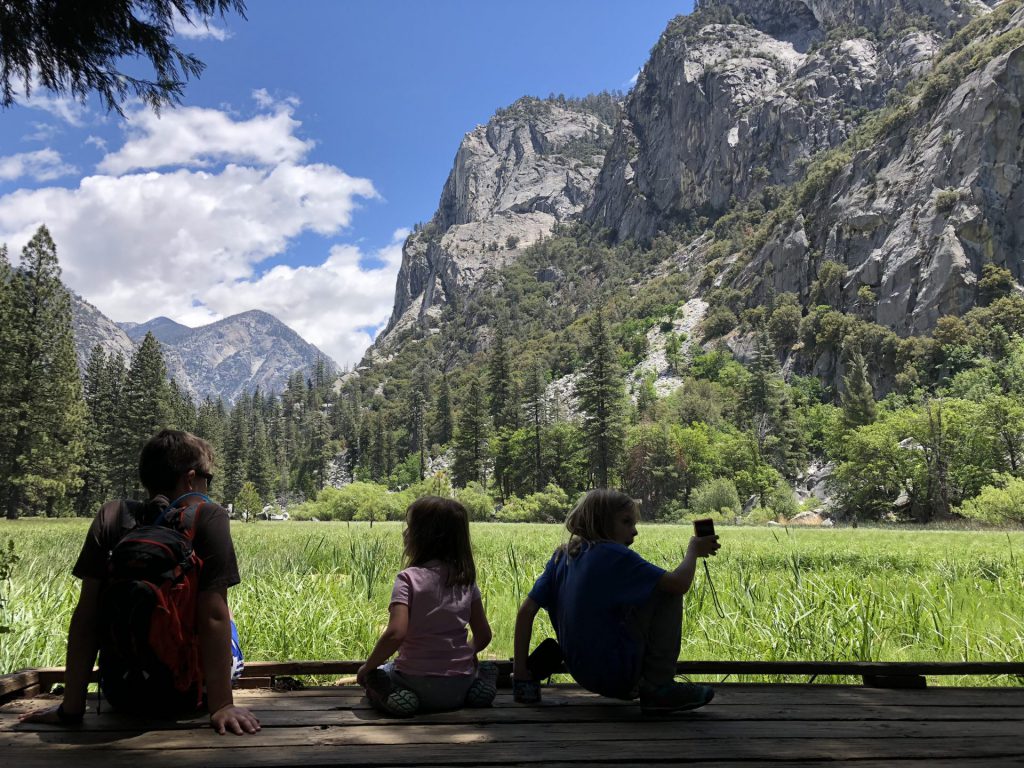 the rest of the hike followed along the river on one side and the meadow (obscured by trees) on the other side. 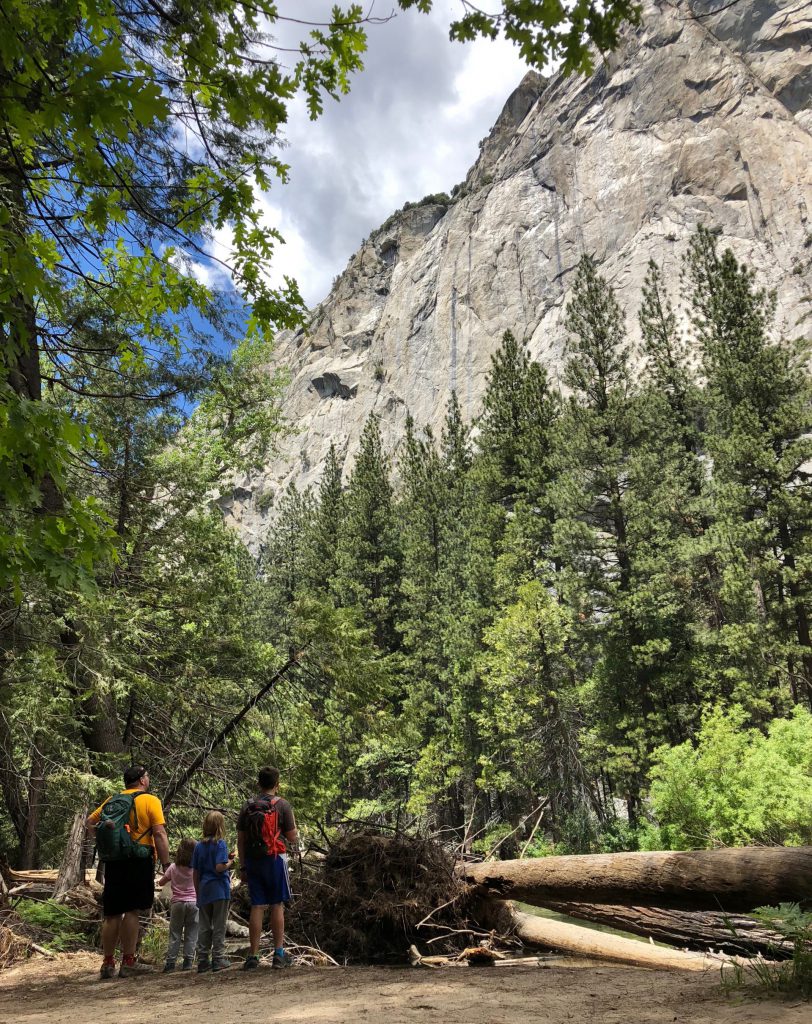 a friendly hiker offered to take a family photo. 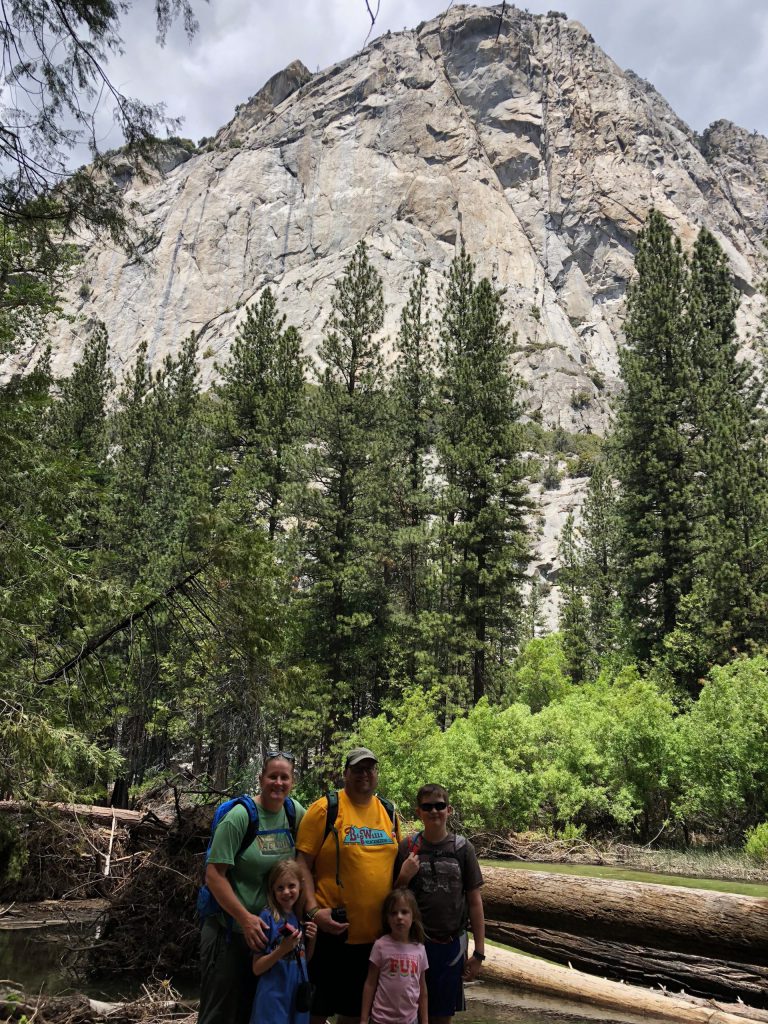 once we looped around the end of the meadow, there was a pile of rubble that we had to scramble and climb through along the other side of the meadow. the kids love a good rock pile. 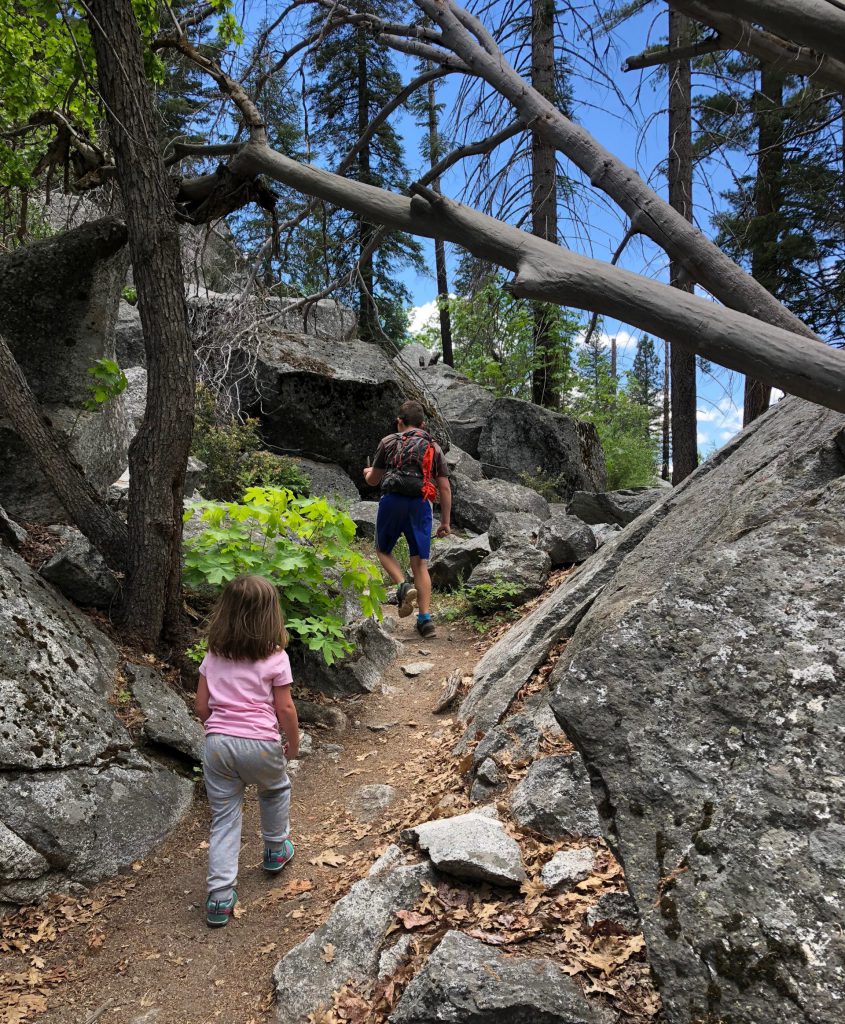 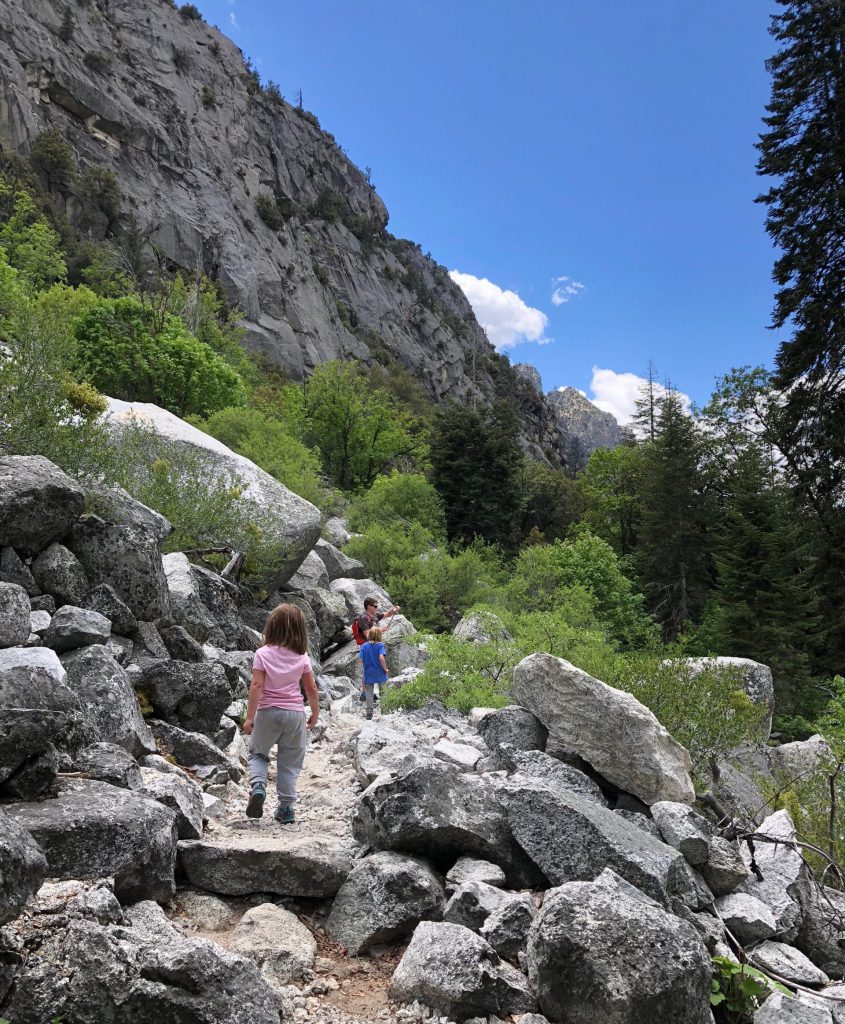 the two big kids found the perfect spot to stop for a snack. 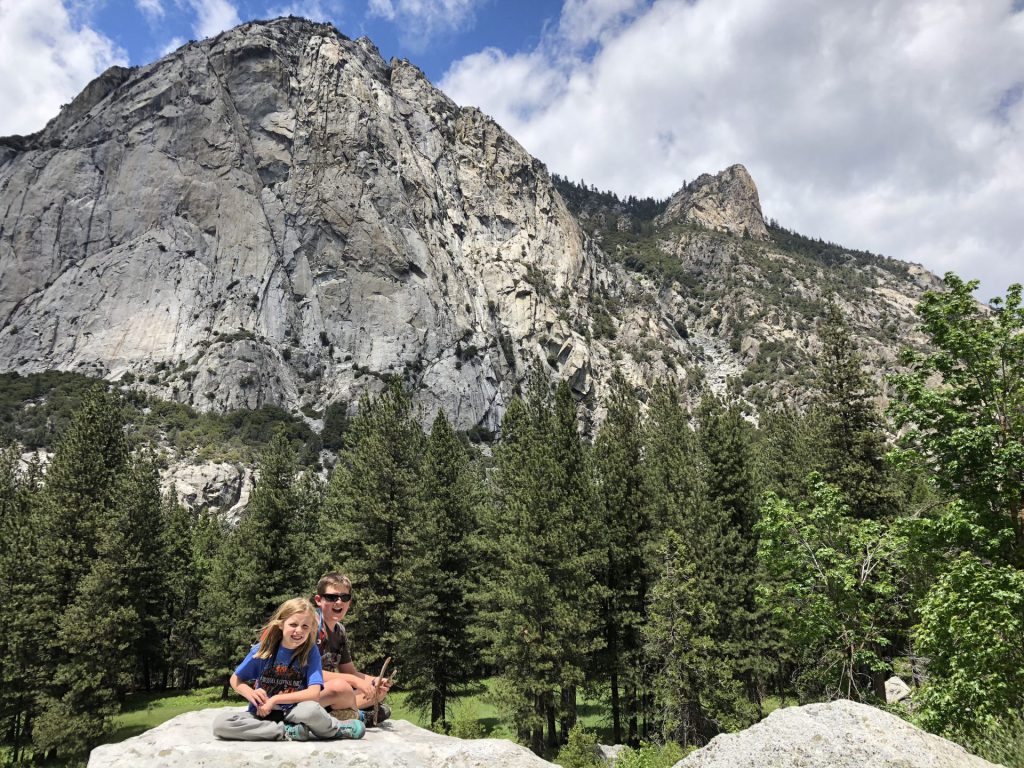 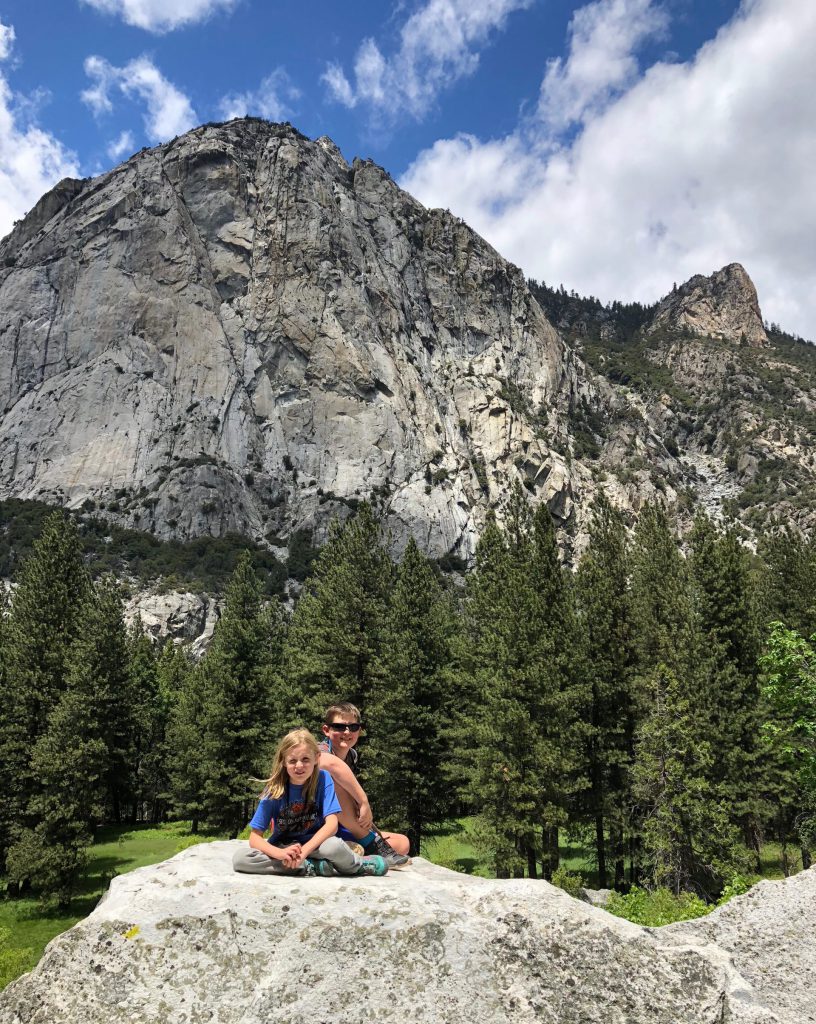 eventually, we worked our way around and back to the start of the trail. we stopped for more photography. 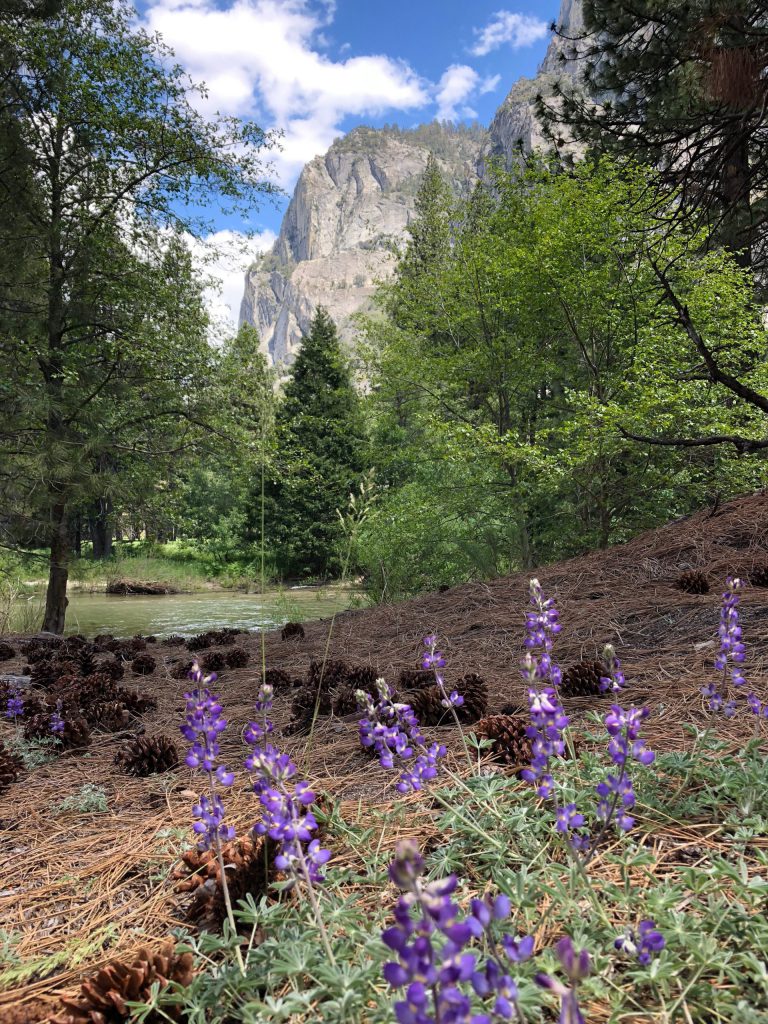 as i was going through pictures for this post, i realized that they all pretty much look the same. and that nothing can really come close to capturing what the scenery looked and felt like. but. still. here’s another. 🙂 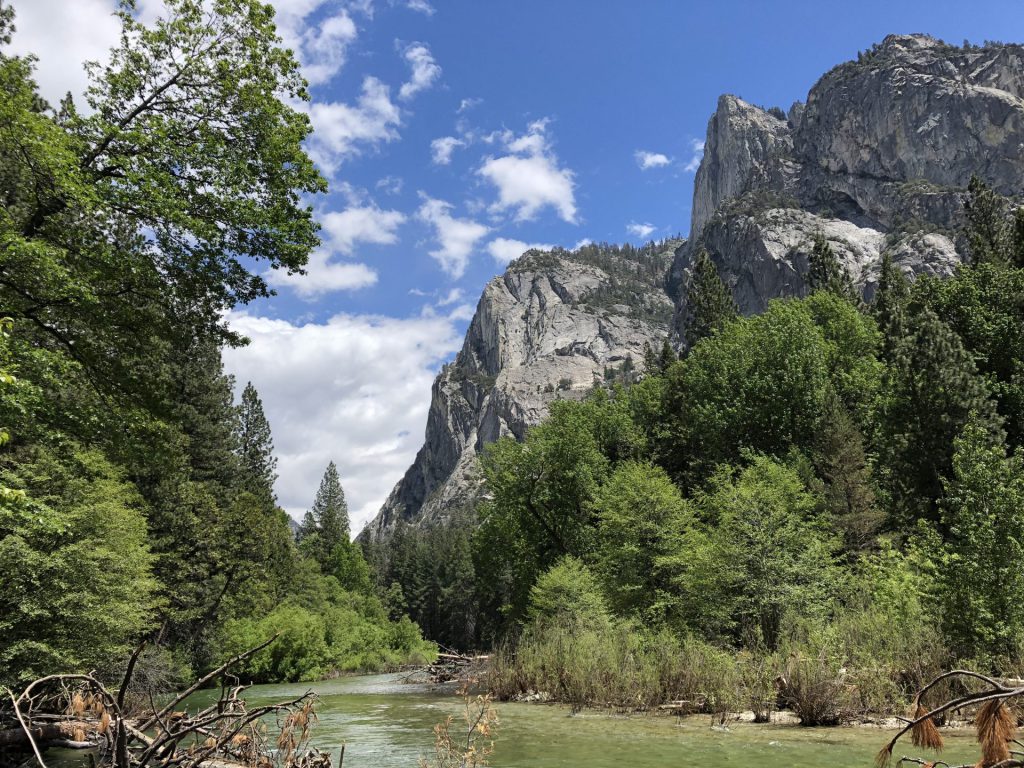 on the drive back up and out of the canyon, we stopped at several overlooks for some pics. 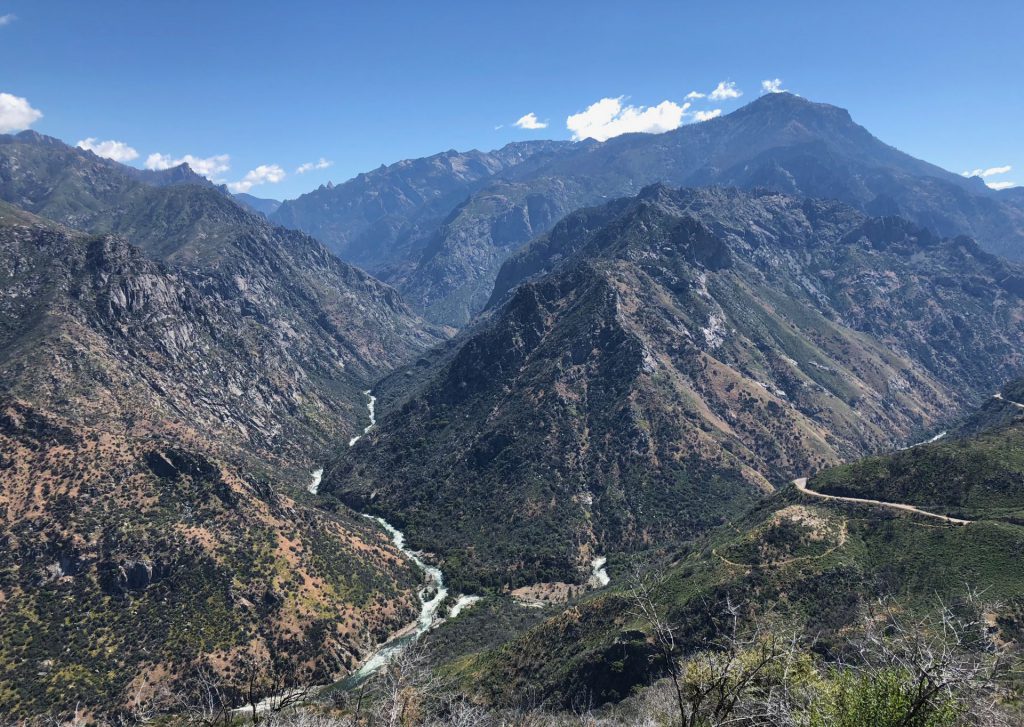 i realized i’m more of an “in the canyon looking up” sort of person than an “overlook looking down in”. 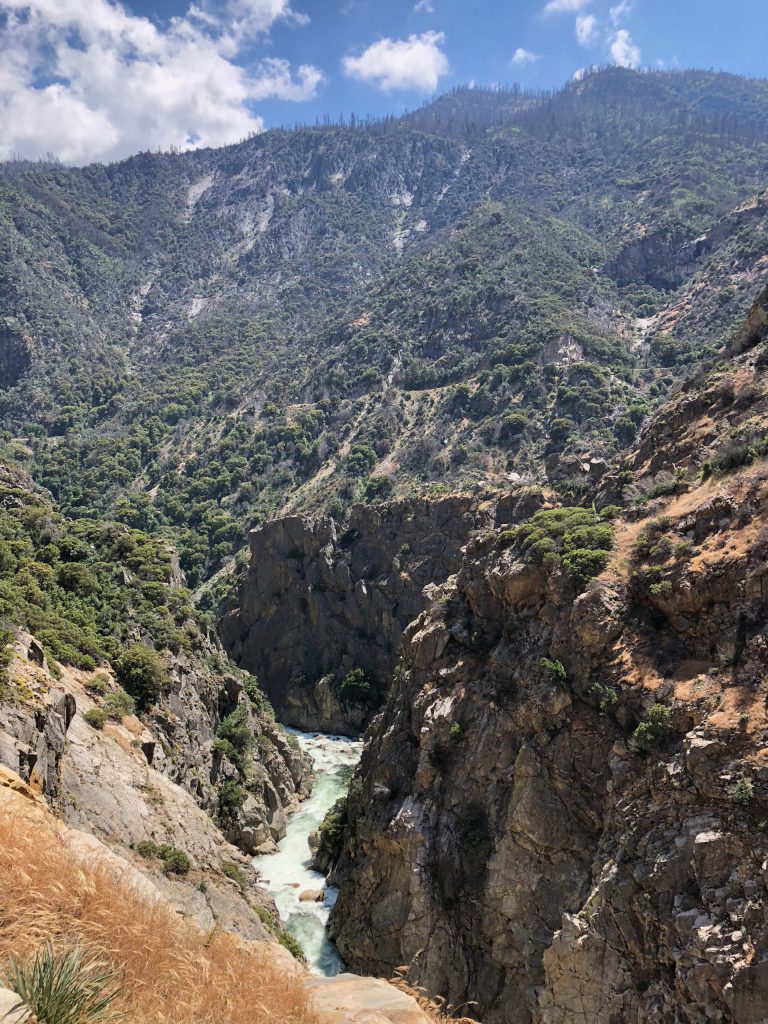 on the way back, we wanted to check out the grant village visitor center. we had heard there was decent internet there and thought it might be a place derek could work (there was NO signal at our campground). it was. and we ended up hanging out a bit to catch up on life (and instagram). then we drove over to grant grove to check out some more giant sequoias. it was our first look at these behemoths without fog, and we were in awe. 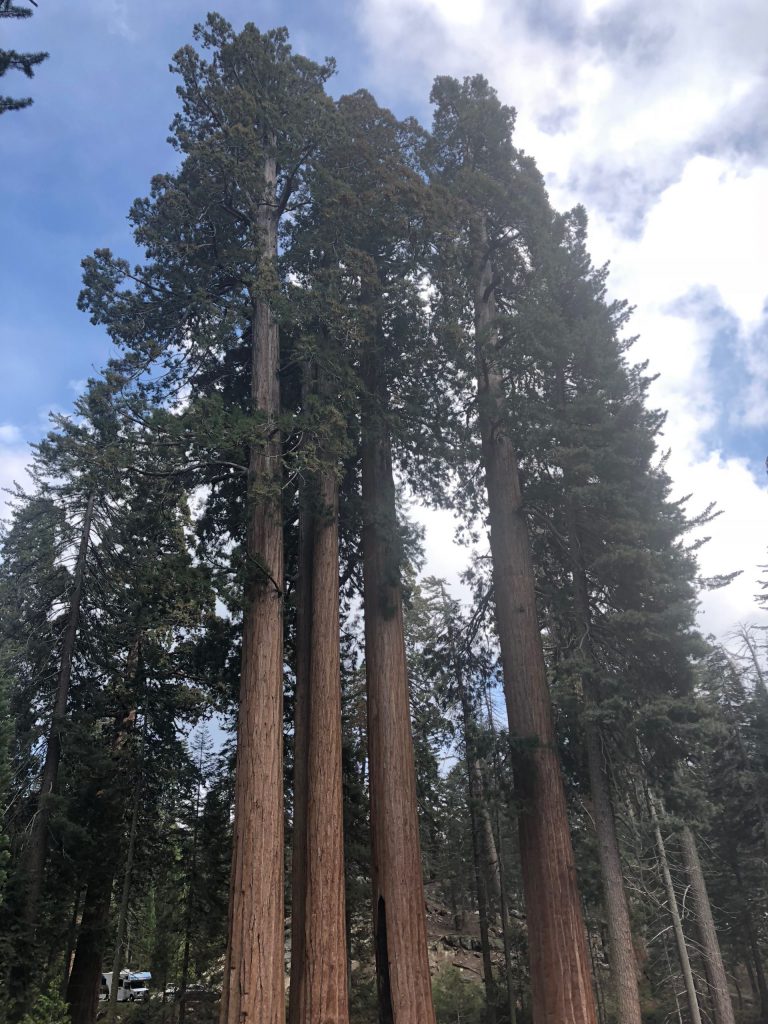 general grant resides in grant grove and is the second largest sequoia and has the largest circumference. you get a little sneak peak just a few hundred feet into the walk. 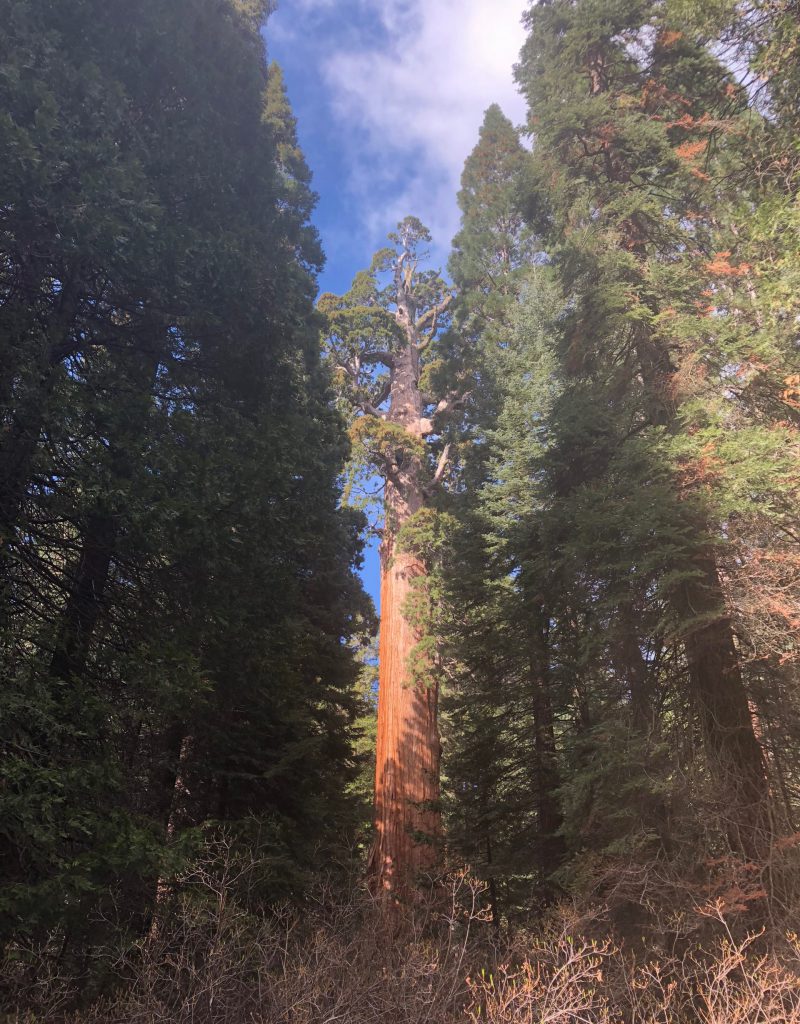 eventually we reached the actual tree and made several attempts to capture its magnitude. 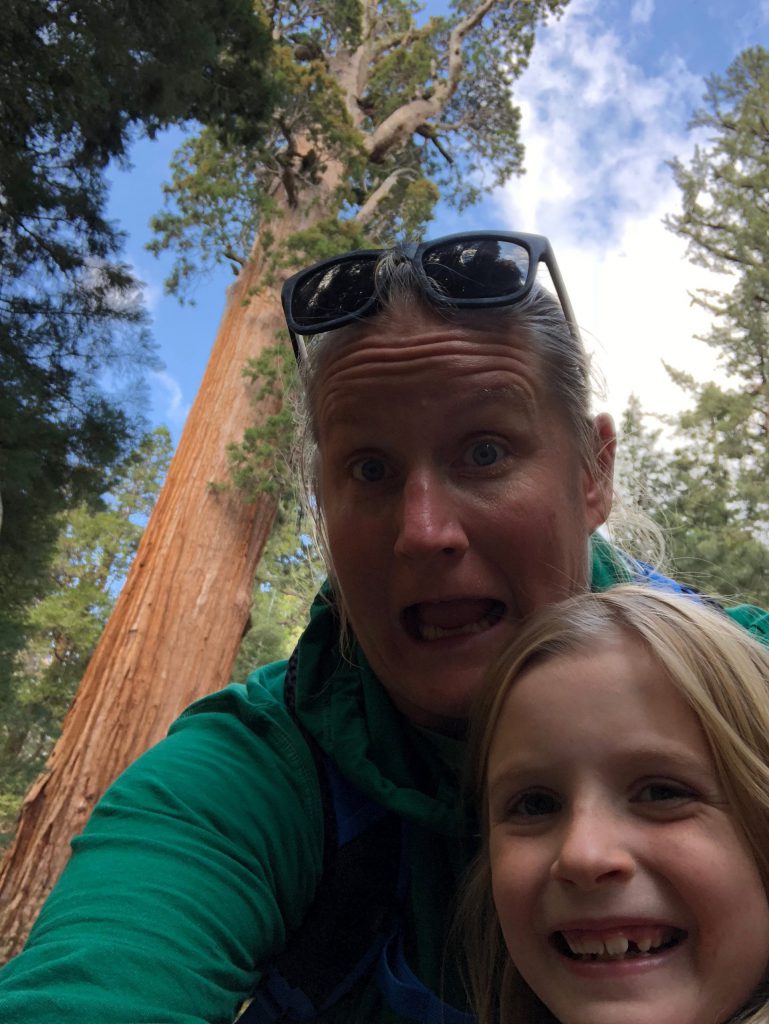 you don’t actually get to be very close up with these guys. their root system is pretty fragile and people trampling all over the ground above them is pretty damaging. also. they need to be proteced from the touching and picking and carving of bark. 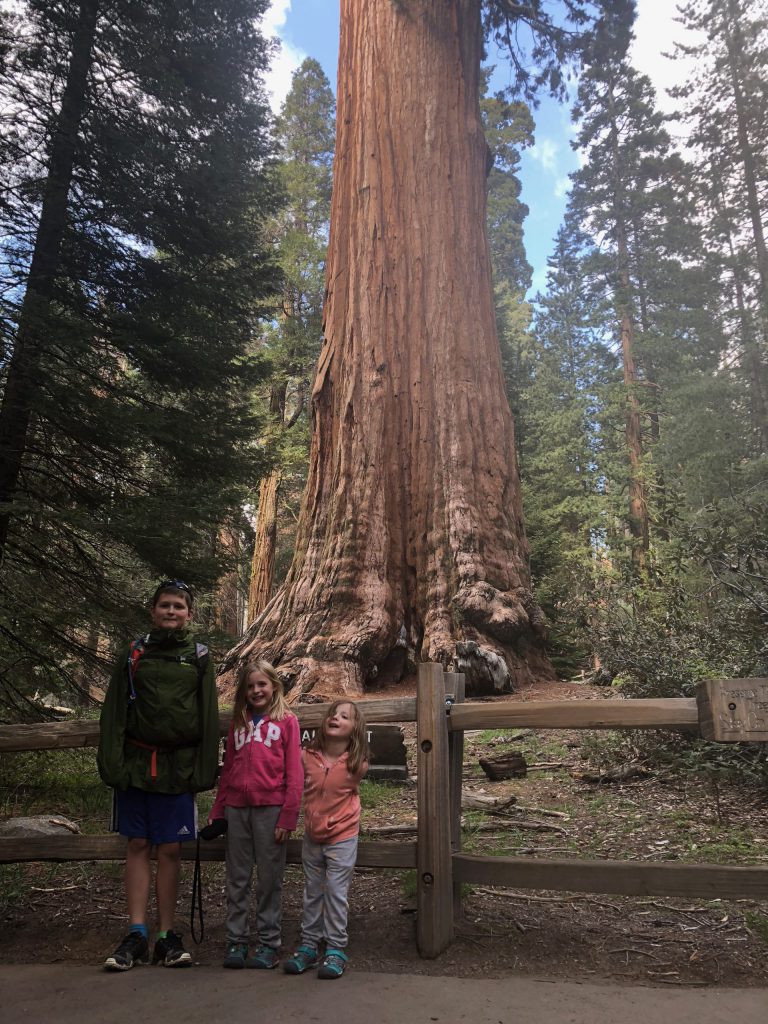 the rest of the “hike” (walk) took us through a long, hollowed out, fallen sequoia, which was a lidkid fave. they had a picture of the tree from the early 1900s and it looked almost exactly the same. these trees live for like 2000 years for a reason. they are tough! even after they die. 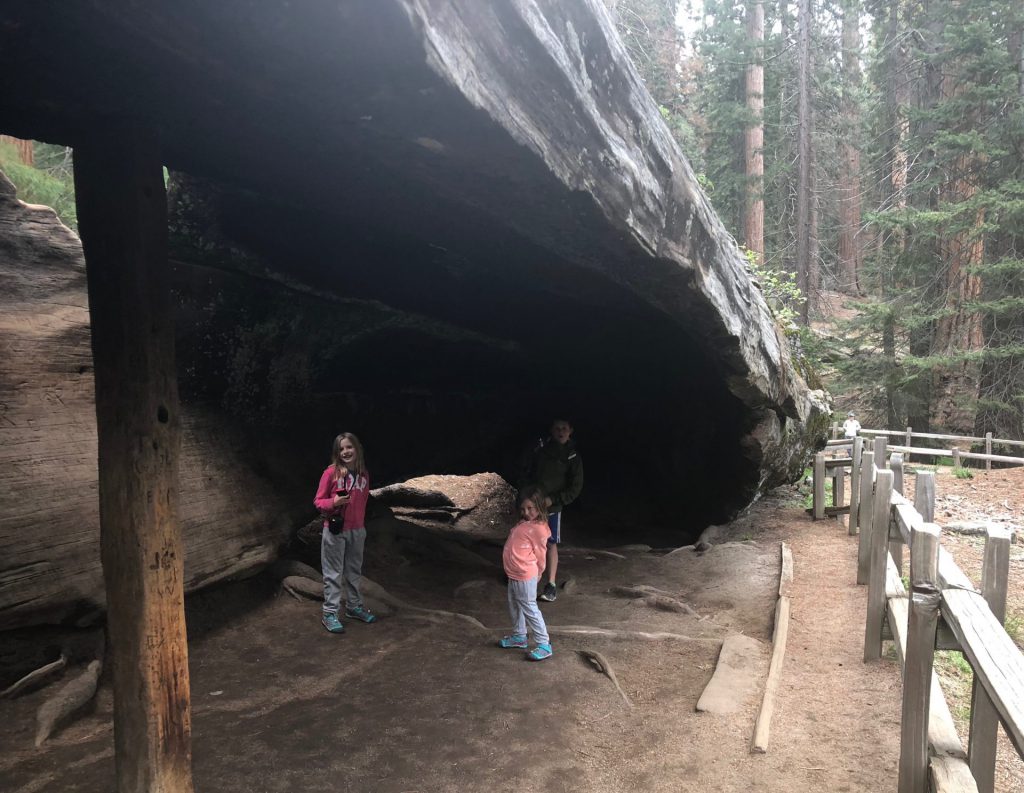 back in the parking lot, we checked out a group of four super tall trees in a cluster. which don’t look all that impressive in a picture. but they were. i promise. 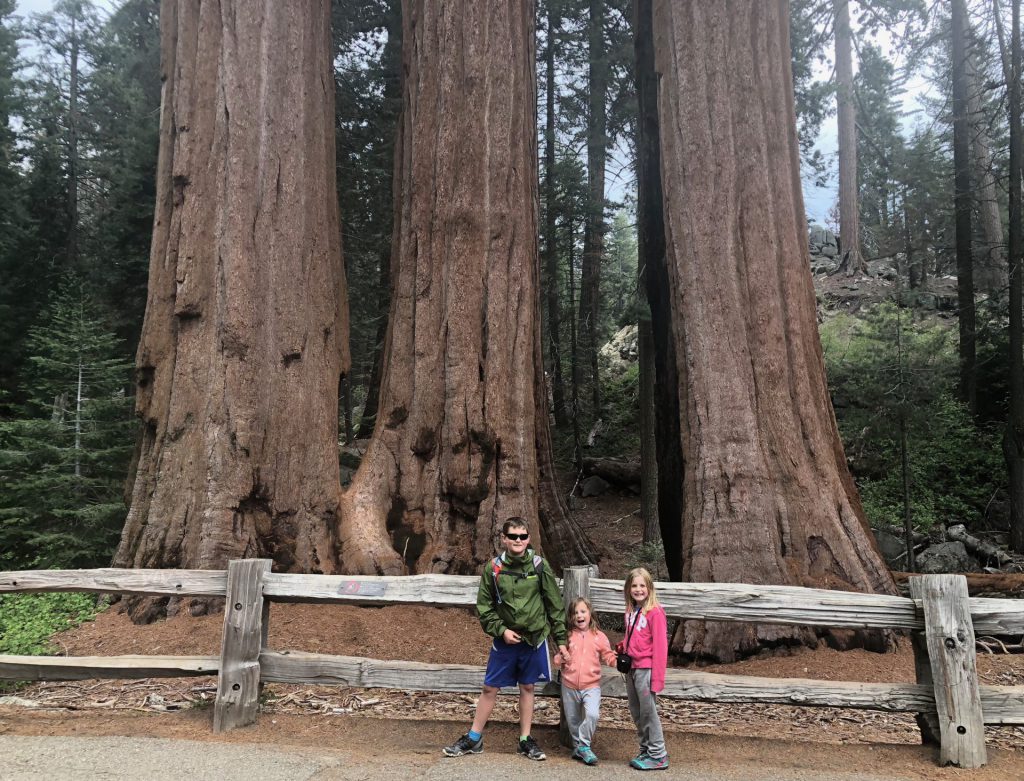 the drive back to our campground was about 20 minutes or so. we settled in to relax and gear up for our next day’s adventure…

One Reply to “kings canyon. scenic drive and meadow hike.”