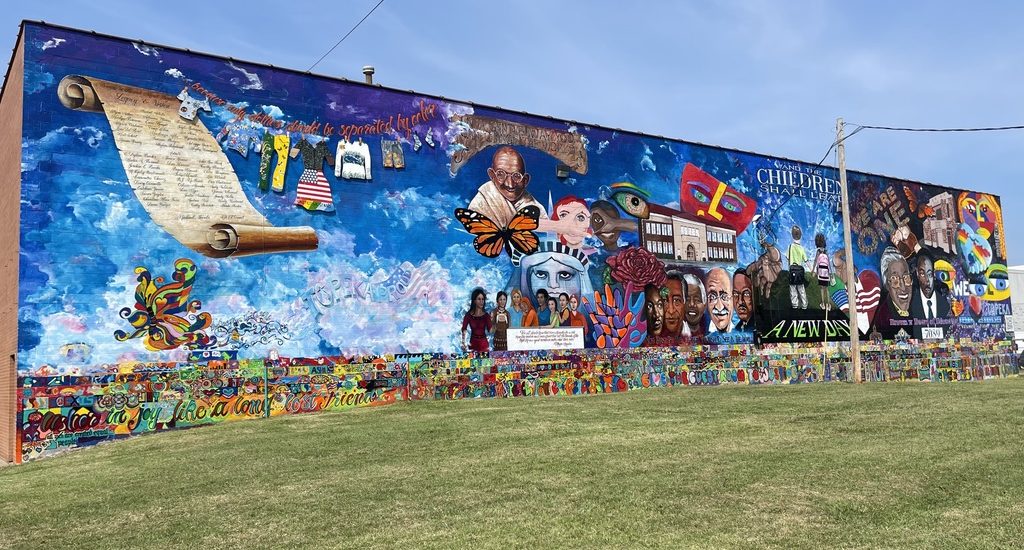 after our little stop in lincoln nebraska, we were headed to just outside kansas city, missouri next. the commute was only a few hours, so i stuffed in as much as i could on our travel day. so, after our morning at the quilt museum, the kiddos and i hit the road, with a plan to detour through topeka, kansas, to tick off another capital/capitol (future blog post), and then to visit the brown v. board of education national historic site.

the museum fills the halls and classrooms of the monroe school, which was where a number of students in the historic supreme court case attended. when we first walked in, we were immediately sent reeling back into what life would have been like for kiddos in a segregated school previous to the 1954 decision that is thought to have sparked the civil rights movement.

a lot of the exhibits were videos and recordings and very interactive, so i don’t have a lot of good photos. this classroom was set up as it would have been back in the day.

one of the most sobering exhibits was a little hallway/tunnel, where video clips of protests and speeches of anti-desegregationists were playing all around us on repeat. we stood there for a minute or so, imagining what it would be like for tiny kindergarteners being subjected to such hatred. how scary it would have been. and thinking about how brave they were. and their parents. for not backing down.

the kiddos worked hard on their junior ranger books, which is always a little hard when we are on limited time and we are trying to actually experience a place, too.

this ranger (who i snapped an unfortunate snapshot of) was excellent, and asked the kids lots of thought provoking questions and was super patient as they answered (or didn’t answer). we could tell he loved this place and was eager to teach folks about this history.

when we were done with the museum, we walked down the street from the school a bit…

…to check out this ginormous mural. i don’t think it’s technically part of the nps site, but it’s known as the brown v. board of education mural.

and then. off to the capitol…