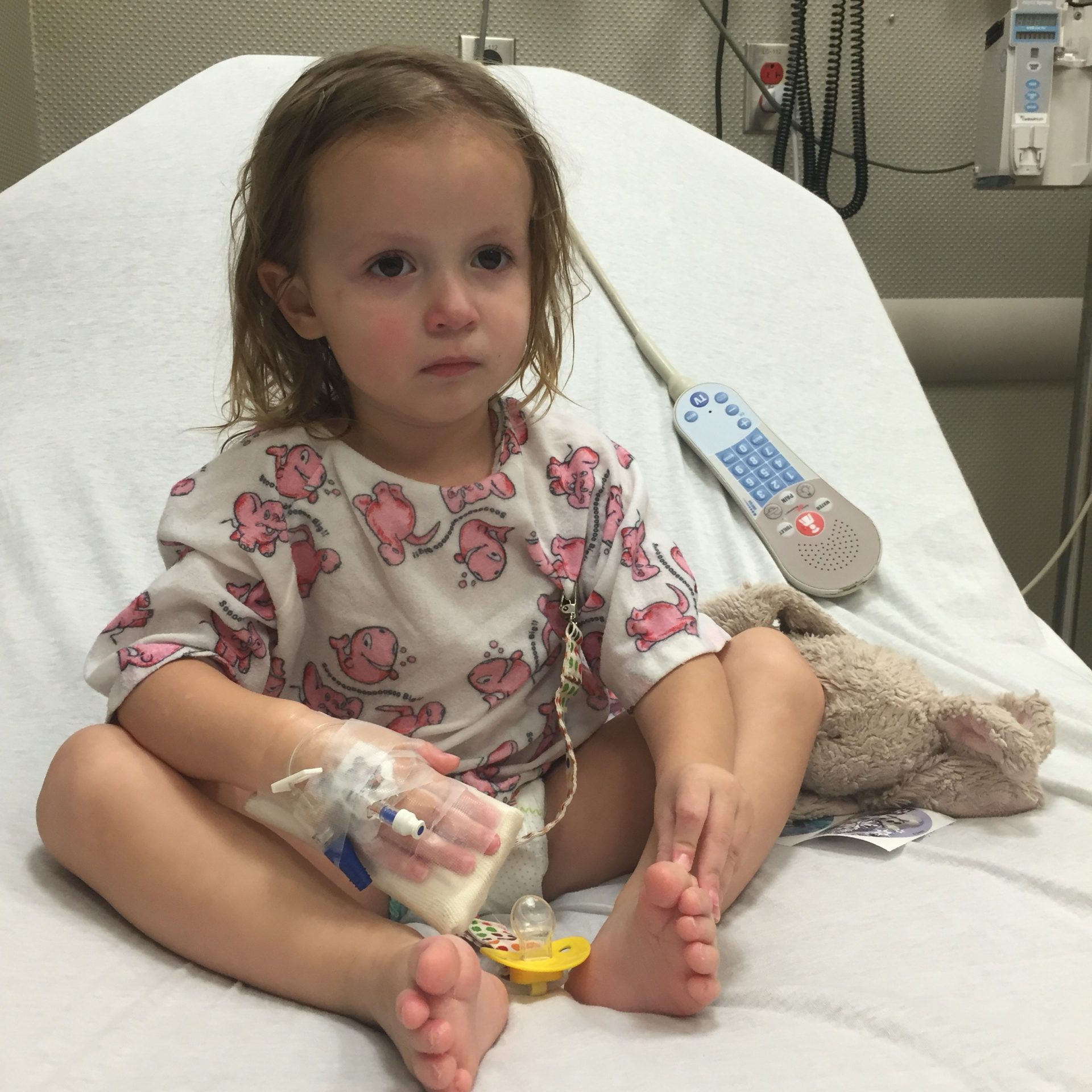 on the monday before christmas, hazel had a fever. we gave her some ibuprofen. and crossed our fingers that whatever it was would be easy, quick and not contagious. 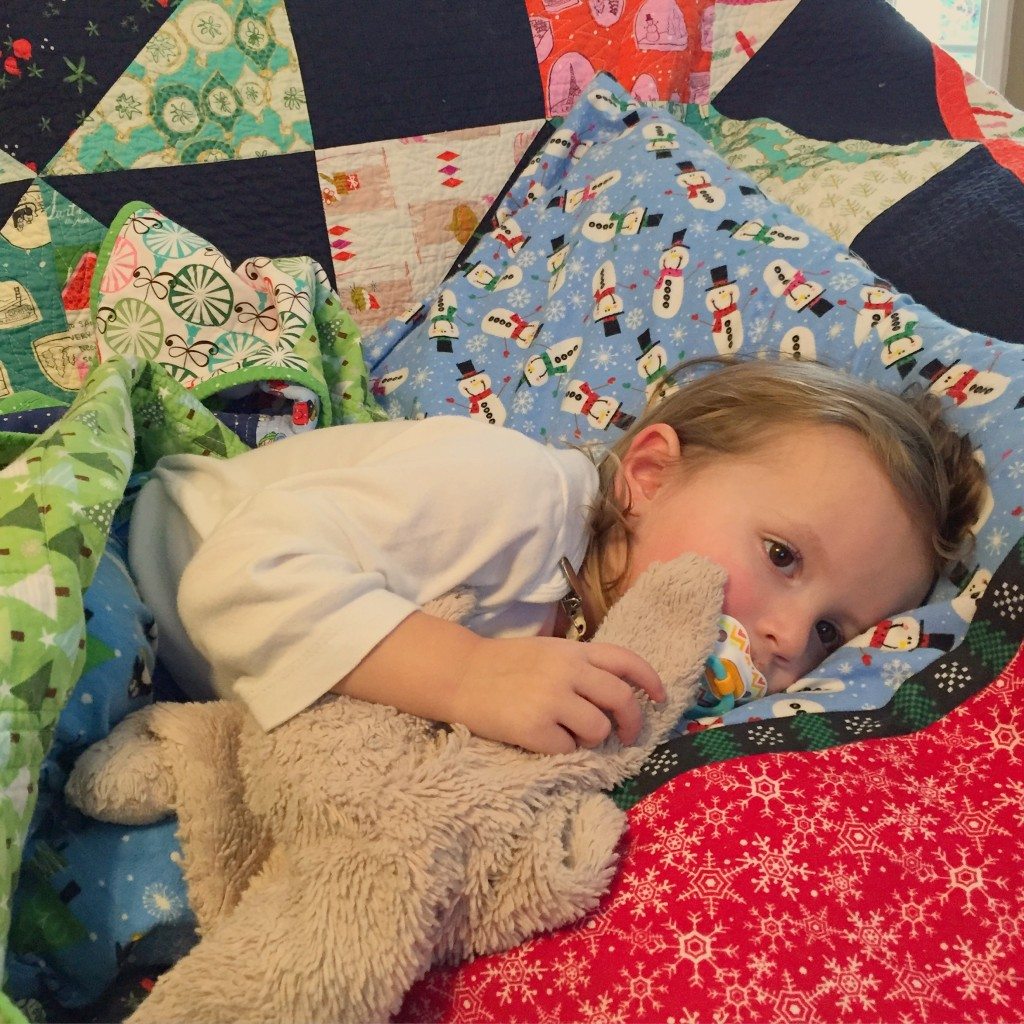 before she went to bed, her fever had come down and we thought it was just a fluke. hahahah. then, at 1:30 am, there was vomit. poor kiddo. she was up half the night. she threw up again at 6:30 but then seemed to perk up and feel alright. 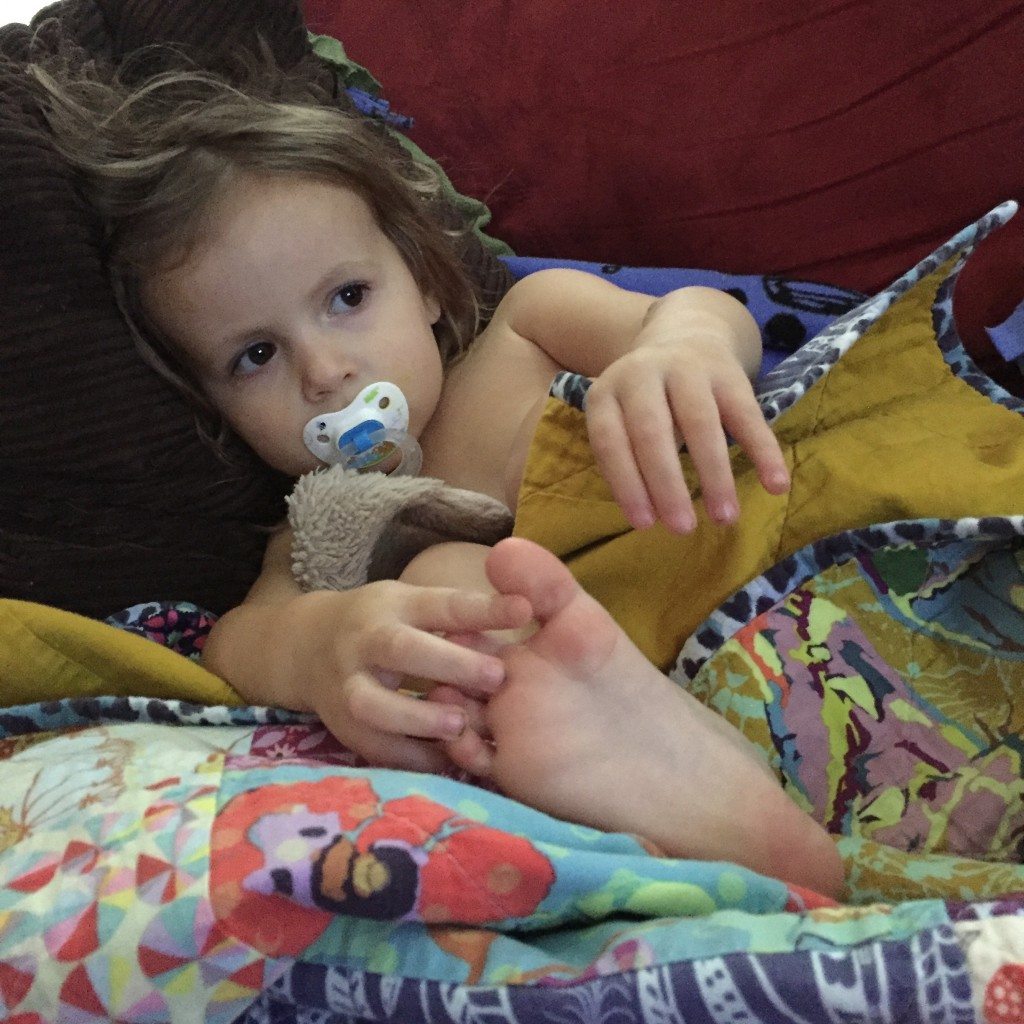 that is. until she took a nap and woke up with a balmy 105.5 temperature. we quickly drugged her, stripped her and began trying to cool her, while simultaneously getting our doc on the phone. they instructed us to go straight to the ER.

by the time we arrived, her temp was on the way down, but she was miserable. 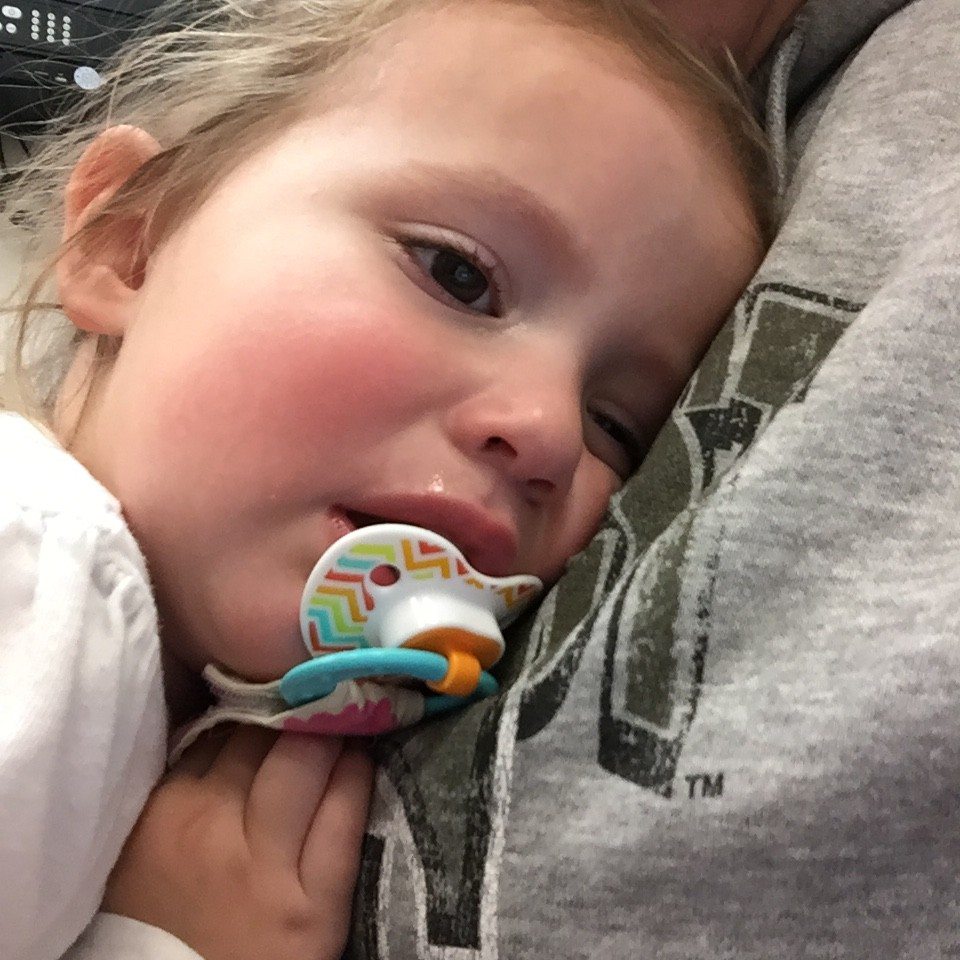 several docs and nurses rolled in and out, asking questions, poking and prodding. they said she had symptoms of a UTI, but since she had no history of them, it was probably something else. even after i mentioned a strange incident for a day or so before, where she announced that she was peeing, which i thought was out of the ordinary, since we aren’t even in potty training negotiations. the determined that she had a little GI bug and told us to continue the tylenol/motrin cocktail for fever reducing. i think they thought we were just overreactive parents. they gave her a complimentary popsicle and off we went. 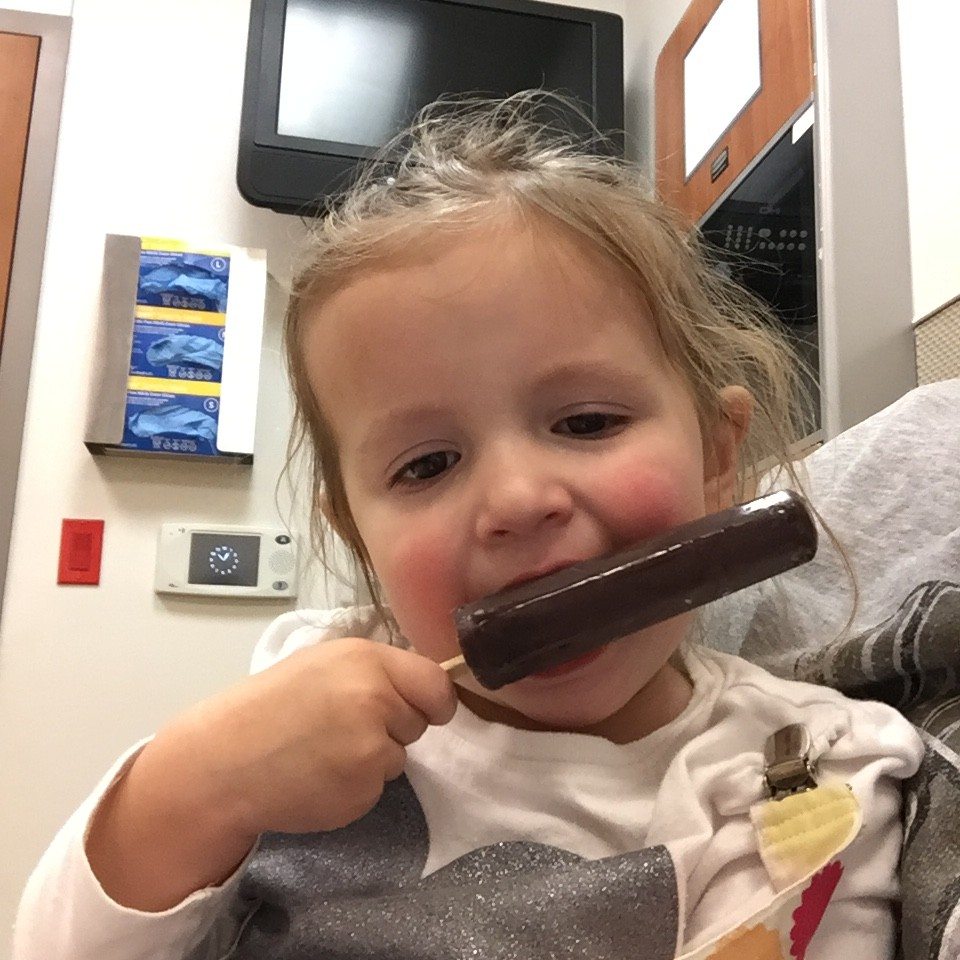 same day. after her afternoon nap, this was what i found. her fever spiked back up to 105.6, so we repeated the drugging, stripping and wiping down with a wet towel. 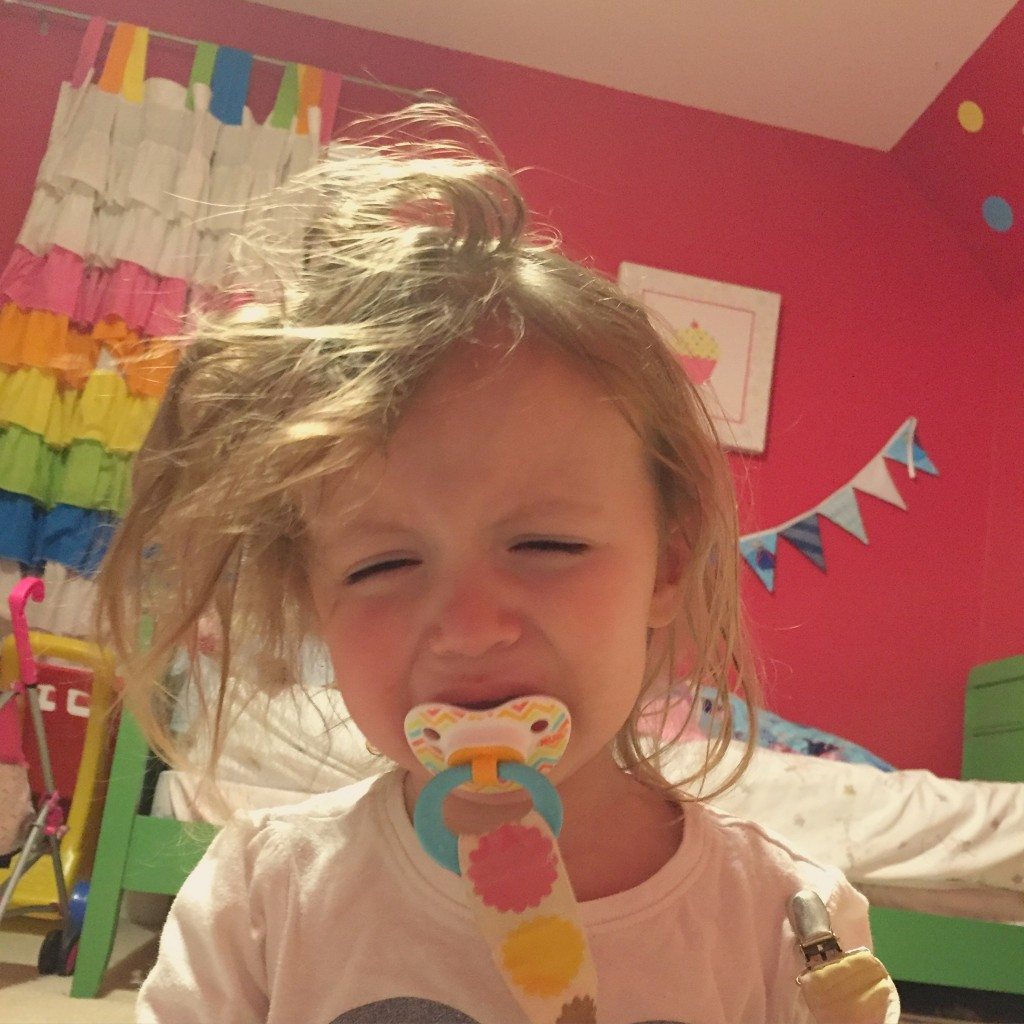 she mostly seemed to be doing better, so long as we didn’t miss any of the alternating tylenol or motrin doses. but she was definitely still tired. and even with the drugs, her fever stayed above 101 mostly. 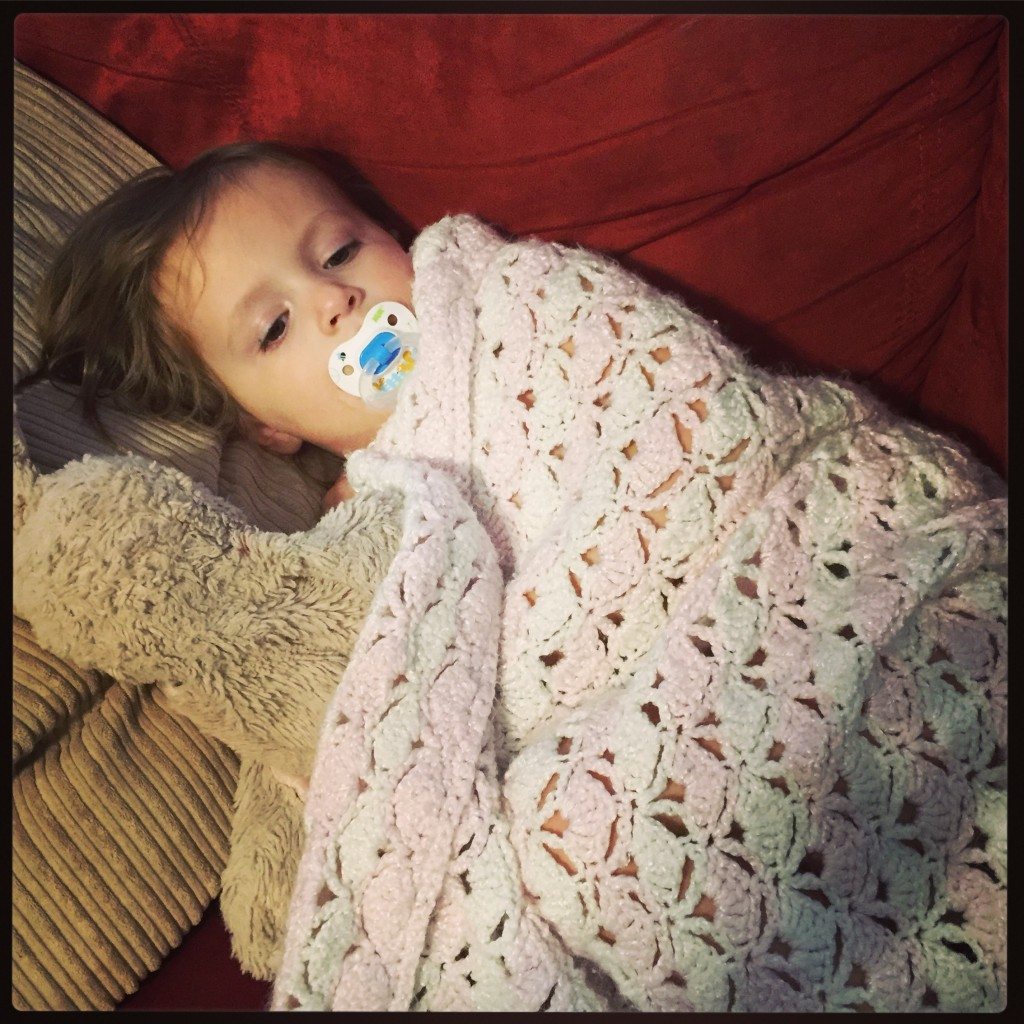 so, after another full day of high fever when the meds wore off and low fever when she was pumped full, we were back off to the doc. she was mopey and pathetic and miserable. 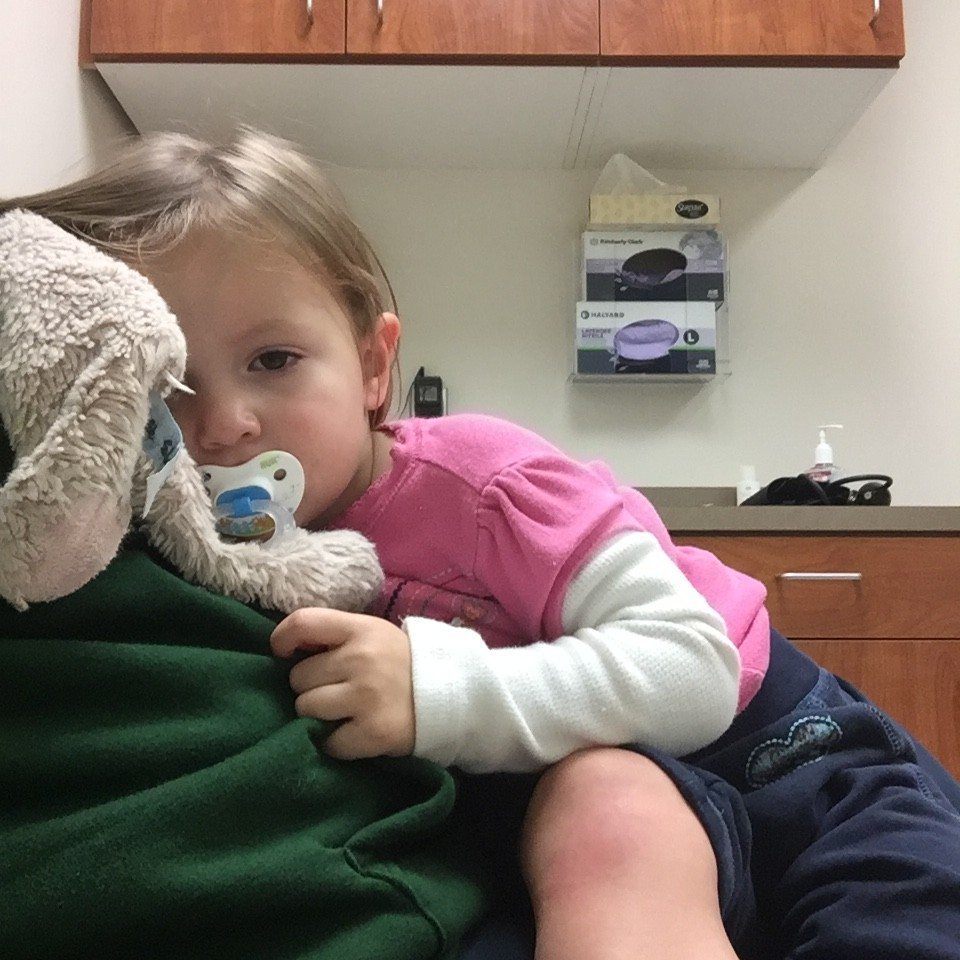 they swabbed her nose, and despite her symptoms not really being consistent with the flu, the test came back positive and we started her (and us) on tamiflu. we were pretty grumpy that it wasn’t caught sooner (by the ER) so the drugs would be more helpful. she seemed to perk right up and we thought we were on the right track. (also. side note. tamiflu was $130 per family member. i’ll let you do that math.) 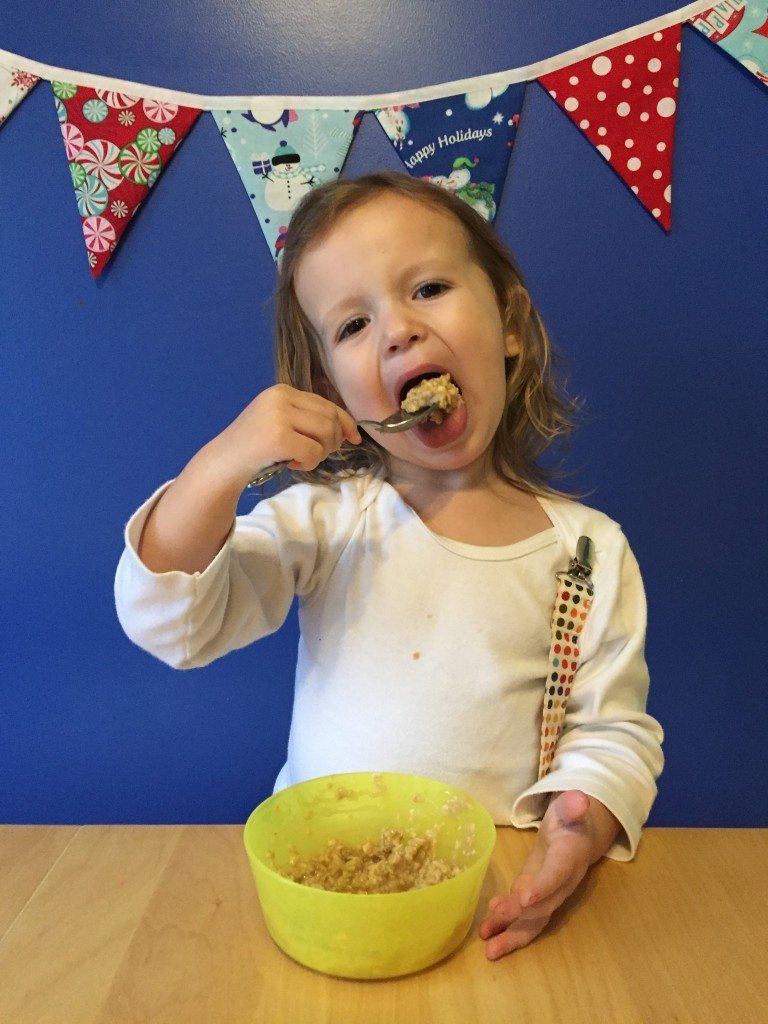 but it didn’t last long. her fever was still high. she was still achy and tired and miserable. but, we stayed the course. for christmas. and the weekend. 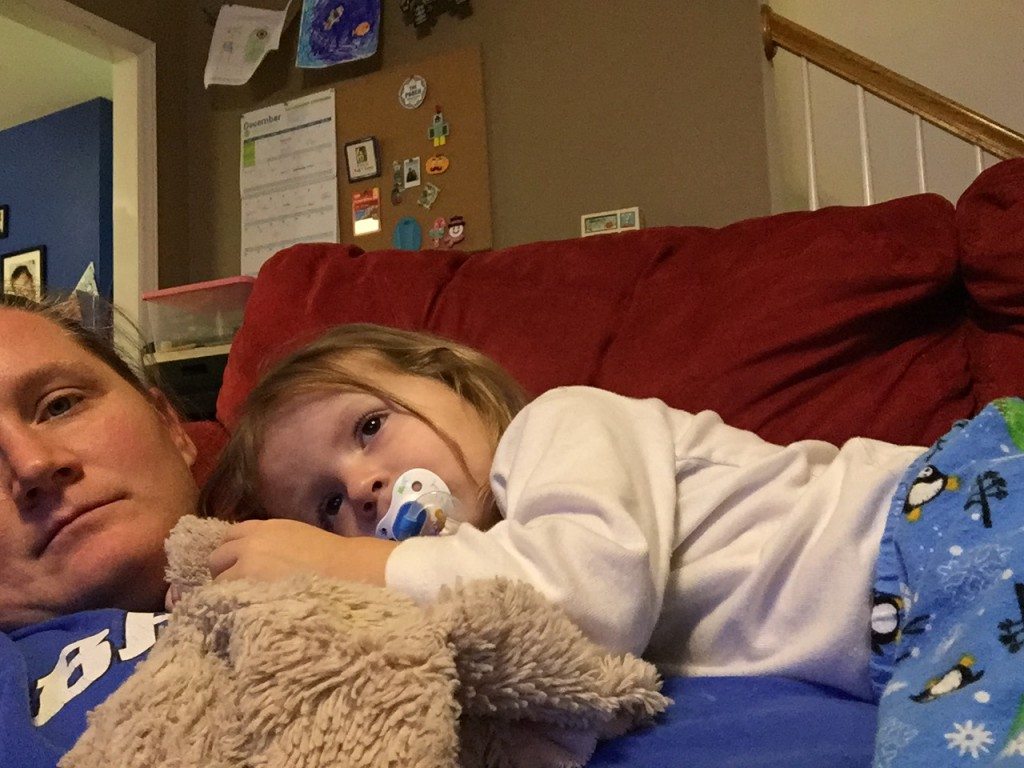 on monday morning, going on EIGHT days of high fever, we went back to the doctor. it was a long visit. we brought reinforcements. 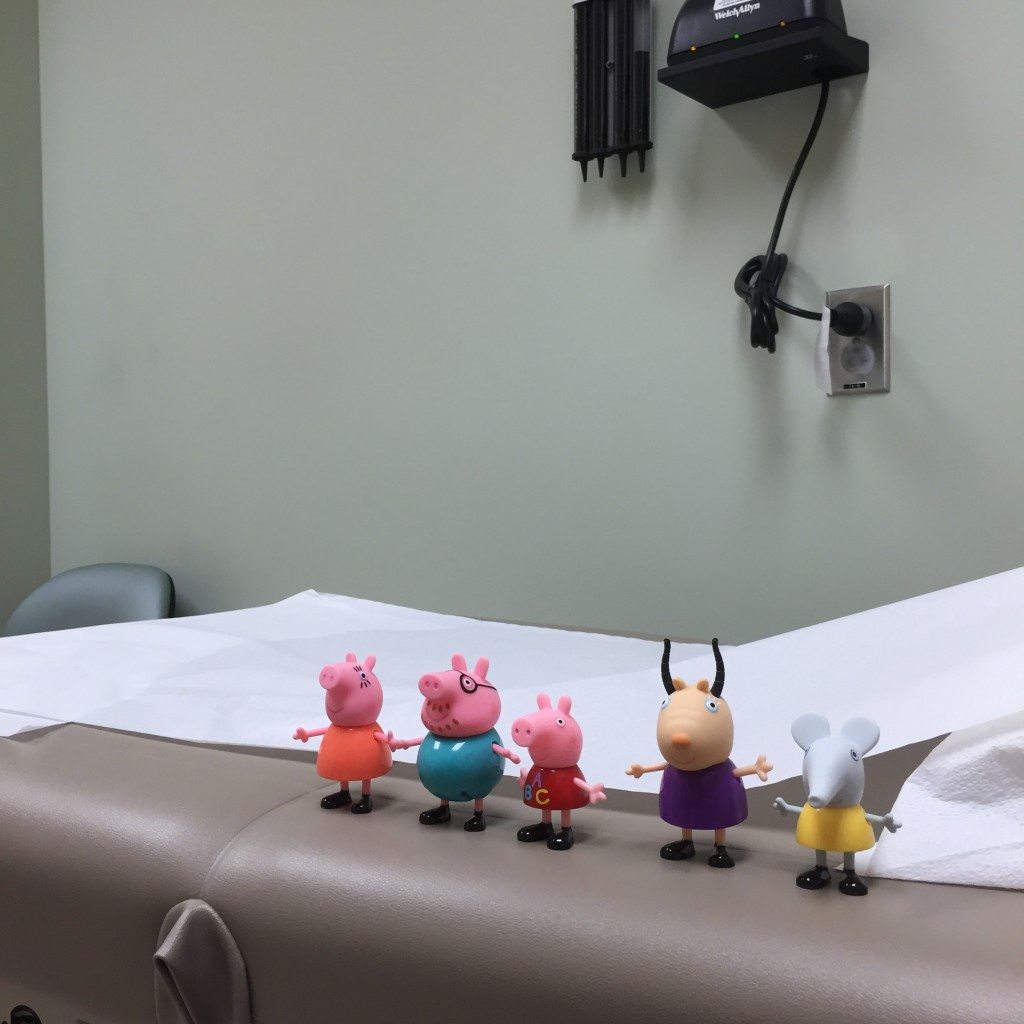 and then the real fun began. they attempted to get a urine sample at the docs office, to no avail. he called his doc pal’s at brenner’s to see what they thought we should do. and the consensus was that we needed to hit the ER again, this time armed with a doctor’s note with a list of things that needed to be done. so, off we went. again.

hazel needed a urine catheter, bloodwork, a nose swab and x-rays. it was the WORST. she screamed her little head off for the first three parts. and i had the unenviable job of holding her head and hands still while they performed all of the torturous medical procedures. after it was over, she looked like the saddest little trooper of all time. 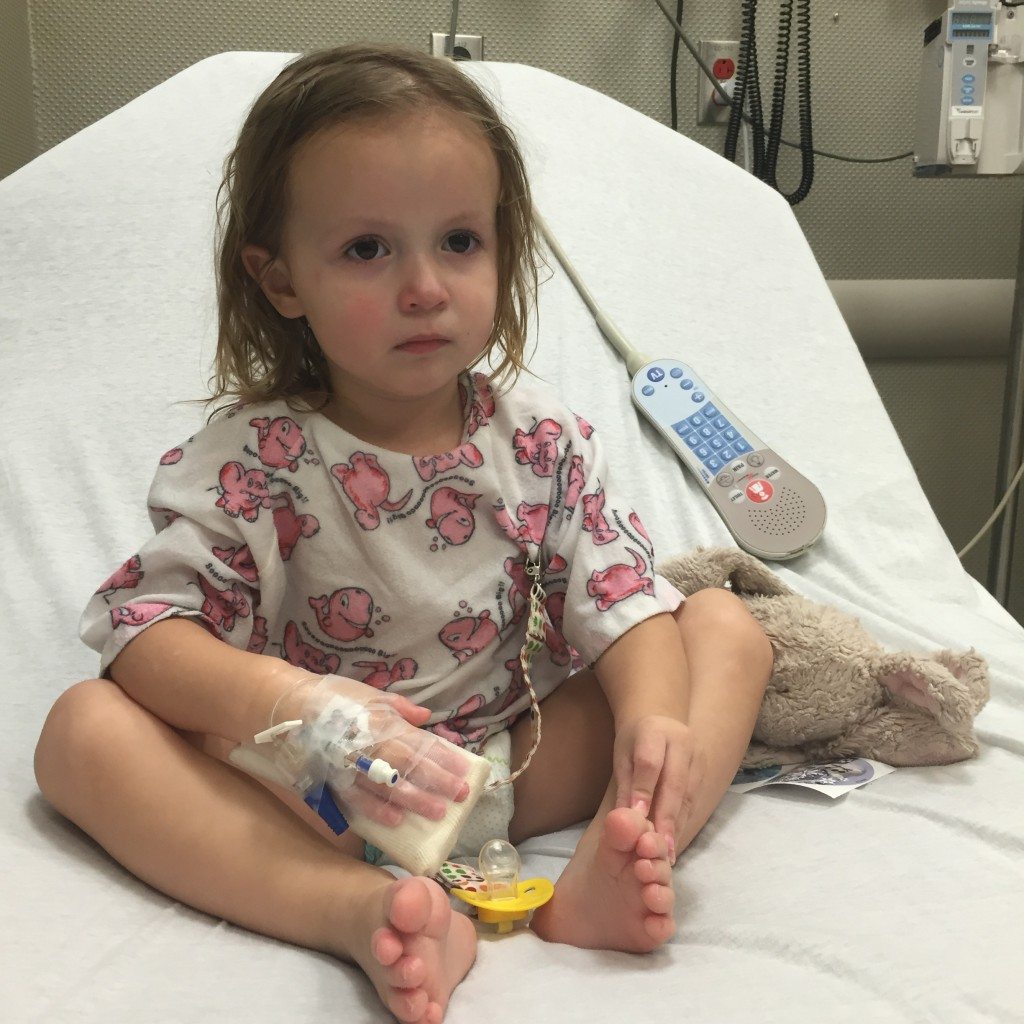 by the time she had x-rays, she was over it. she was just whimpering as they pinned her to the board. i had to stand behind a glass and lead wall, and it was the saddest. 🙁 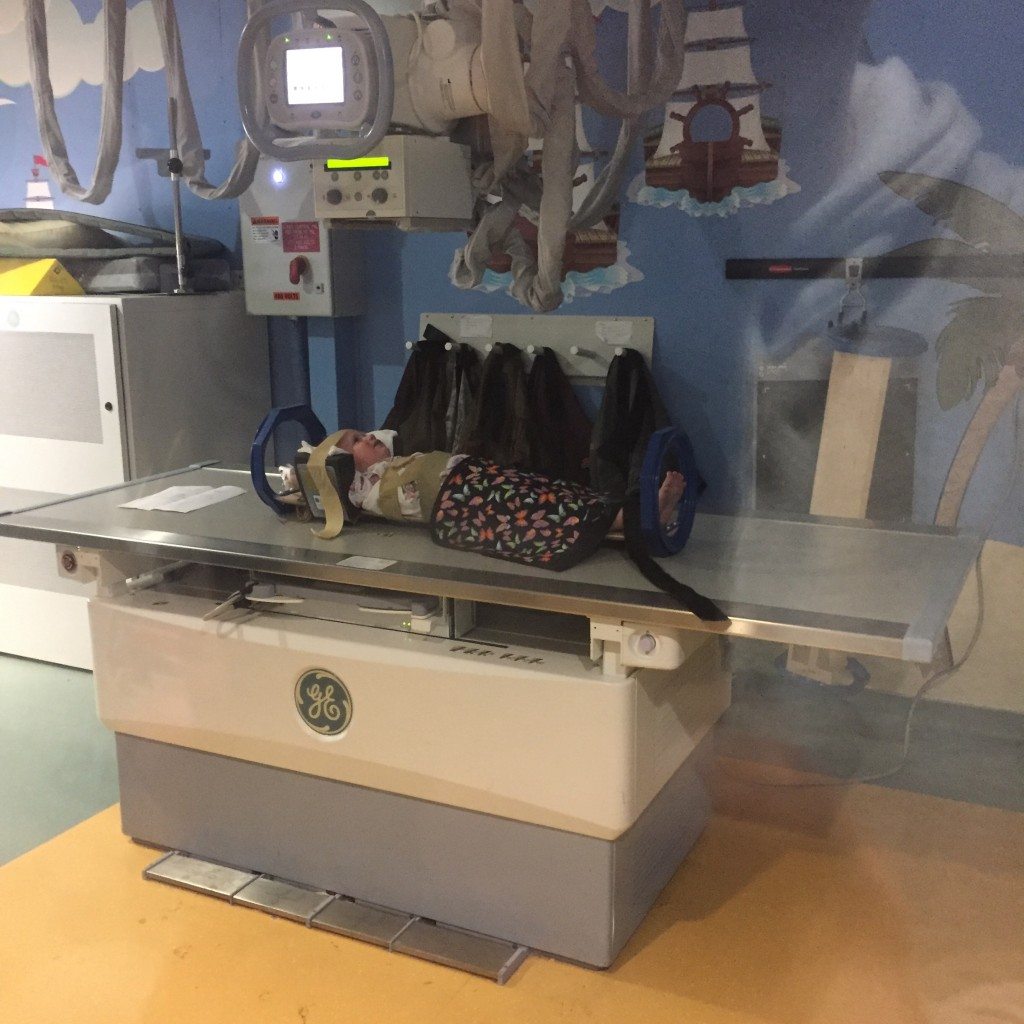 then, we waited. the test results would take about an hour. hazel was exhausted. and sweaty. and pathetic. so we snuggled. and slept. 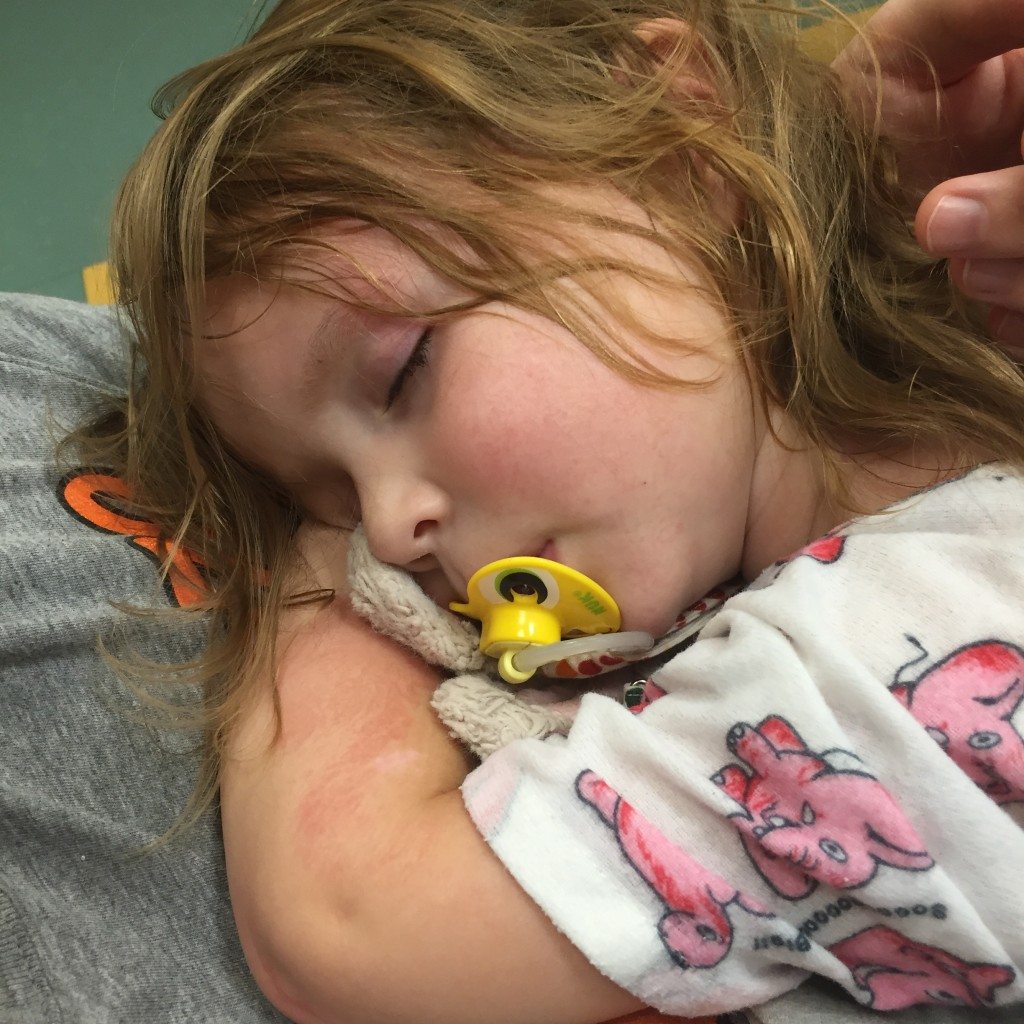 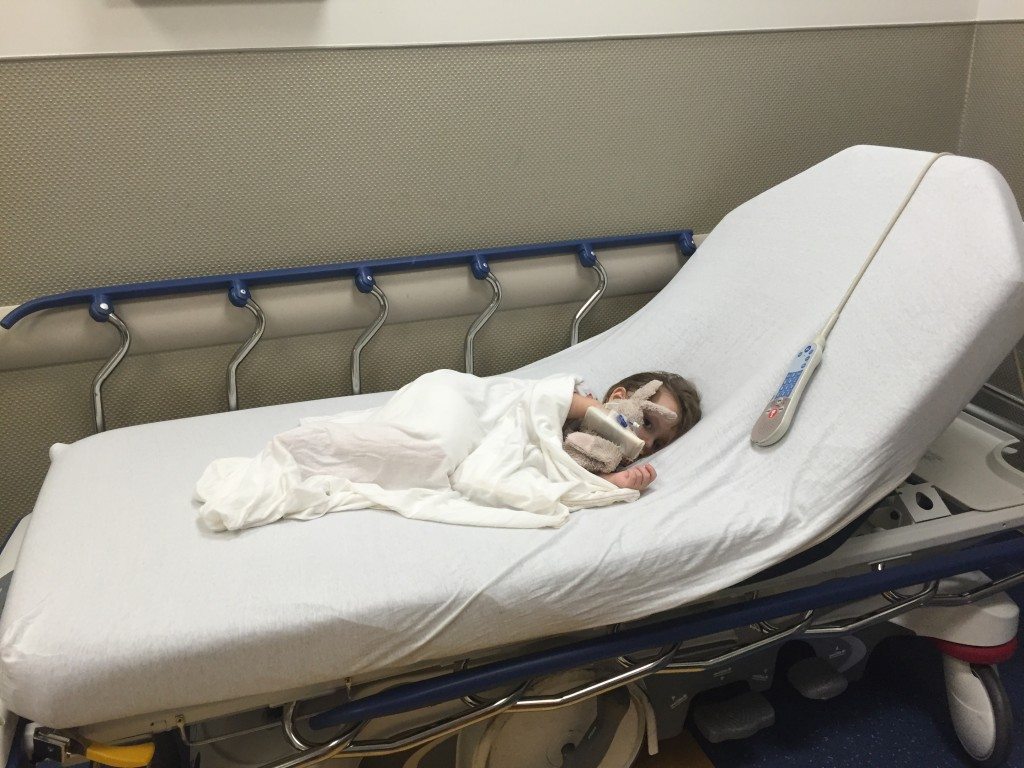 turns out. hazel had a UTI. the very thing the doctors ruled out on our first trip because she “didn’t have a history of them” (which is not the same as an actual medical procedure to check for one, in case you’re wondering). anyhow, now we don’t know if she ever did have the flu. none of us picked it up and there were never any symptoms of it. so we basically spent a ton of money, had a quarantined and miserable christmas, and let our kid suffer for eight days, all because of some idiot ER doctors.

anyhooooo….
we started the crazel on some antibiotics and took her home. she conked out after her long exhausting day, but within 12 hours, she began to perk up and 24 hours later and her fever was gone and she was back to the old crazel. 🙂 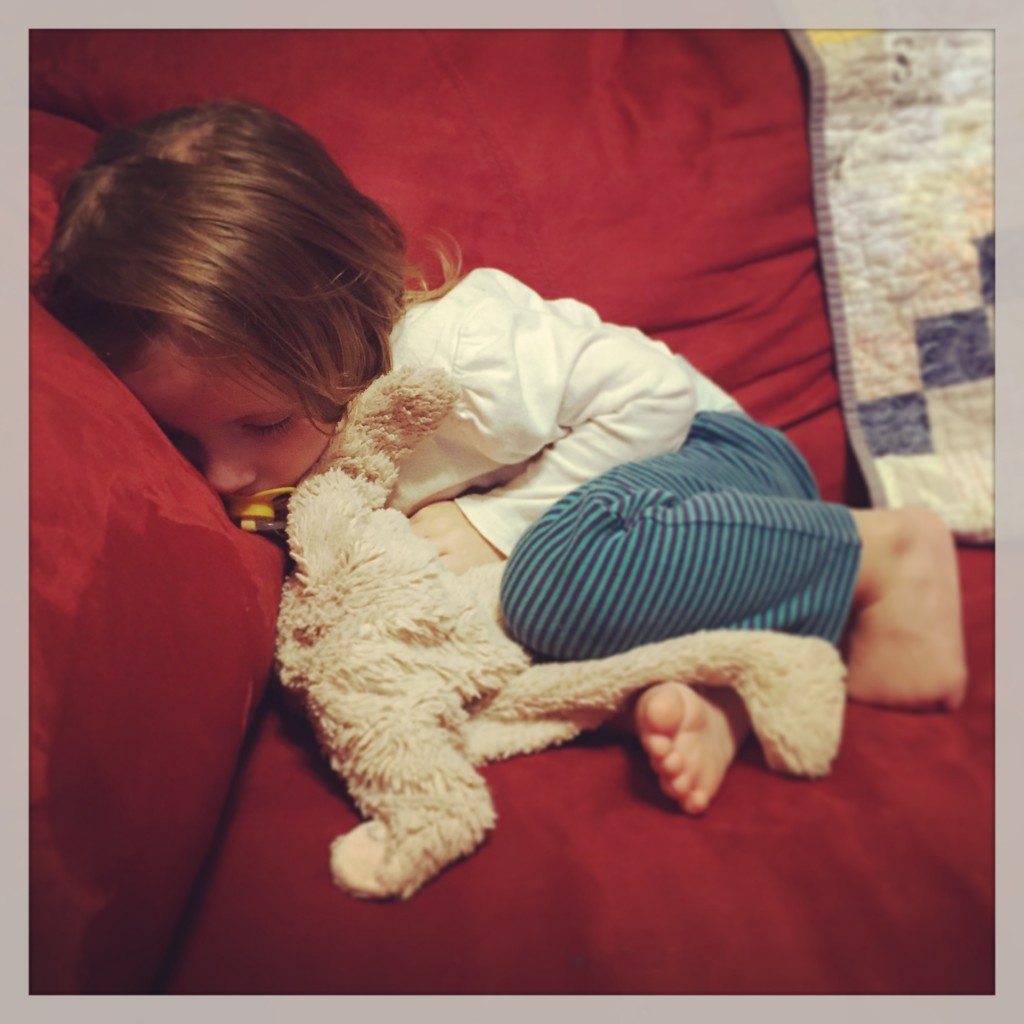 we are thankful she’s on the mend. but pretty frustrated with the process to get there. next time, i will be the crazy mom who demands tests. now i know how those moms get to that place. thanks for reading our saga.

3 Replies to “adventures in misdiagnosis.”