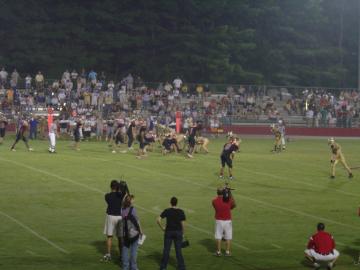 Yesterday, we had the school’s first pep rally of the ’04-’05 school year. It seemed a little disorganized, but maybe it’s just that I’m a teacher and the last one I attended was my senior year of high school.
Then, Derek and I went out to the Forbush Falcons/Elkin Bucking Elks football game. It was interesting. Again, it didn’t have the same feel as when I was at Good Old Batavia, but it could just be my difference in years. There was one obvious difference: Smoking is an accepted activity at a North Carolina High School Sports Venue. It’s probably not a battle worth fighting, I guess.
Anyhow, we left with a couple minutes to go, but Forbush was ahead 20-7, and Elkin was on the verge of their first loss in 22 straight games. Go ‘Bush.

9 Replies to “Falcons vs. Elks”