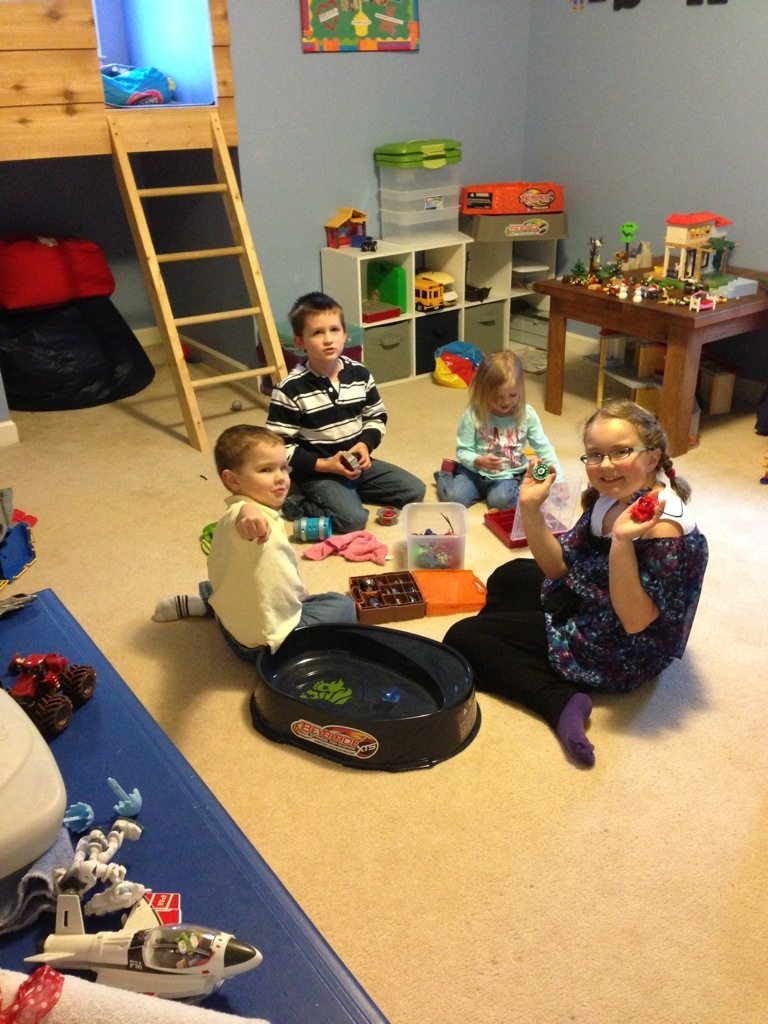 not a lot going on around here. it’s january. cold. boring. blah.

we’re in the full swing of keeping our extra little buddy in the afternoons. he’s so cute and fun. both of my kids love him and i think he really likes hanging with us. he especially loves the chickens and collecting eggs.

a lot of “don’t break the ice” has been played. i have always teetered on the edge of goodwilling that game, and i’m glad i haven’t. at this point, i would even replace it, if too many pieces were lost or if it were to break.

this is my favorite picture. he said “this is the first chicken i’ve ever caught!”…

in other chicken news, we’ve been getting about 4 or 5 eggs a day. so, that’s exciting. we’ve given some away already. full disclosure. i’m working my way towards eating them. they are a lot different than store eggs. and i think it’s mental on my part. but, i can only have them scrambled. something about the over-easy runny yolk is a little too much for me.

now that my (our) afternoons are a little more busy (i doubled up the number of school car pickup lines i have to sit in per week). and my alone time with anna has been cut into. i try to be more intentional with our mornings. so, rather than let her aimlessly roam the house, while i keep up with stuff, i try to do things with her. like paint. even if the set up and clean up is three times longer than the amount of time she paints.

same thing for ike. he’s had a little bit of an adjustment coming home to strangers (at first, now they’re buds) in his house. so, we stopped by his school for lunch and brought wendy’s. (i would bring chick fil a, but his class eats lunch at 1045!! chick fil a starts serving lunch at 1030 and is 15 minutes away. if i add in the walk from the car, the signing in, and so on, i’m not sure we could pull it off. maybe he would like breakfast?).

i’ve tried to streamline things around here. and that’s helped my craziness. for example. i make all of ike’s lunches on sunday night. then, i just pull one out in the morning. shove some ice packs in and we’re good to go.

aaaaannnnddd… here’s a picture of the knuckleheads from one morning when they were up at like 6 am (a pattern that i’m not too happy about) and anna held a flashlight for isaac to read to her. cute. even though it was 6 am.

on tuesdays, we also pickup our new buddy’s older sister for a little while. anna thinks she’s awesome.

yesterday was a snow day. i was looking forward to a nice quiet day of just me and anna (i don’t keep any kiddos on friday). but, the weather and the south had other plans. a light dusting closed all the schools and isaac would join us. and render our day decidedly NOT quiet. so, we got busy with play-doh.

my old college roomie, mandy, and her girls came over to hang out. that was fun. and crazy. i worked on a cake, to be blogged about later. we played with chickens. and ate leftover frosting. and played the wii. and decorated lucy. the world’s best dog. (except when she runs away or eats chickens or bark incessantly at pedestrians).

my last bit of news is that, since i only really have from 730am-noon with anna, i’ve decided that she should spend any of that time at the gym. which pretty much meant that i needed to go in the morning. the very early morning. the part of the morning that is still pretty much night.

and i’ve started taking spin classes. they are intense. but, awesome.

and i’m down 14 pounds since, well, some point. i had a little lull around christmas to just after new years. like most americans. only a whopping 27-ish to go. or more, ideally.