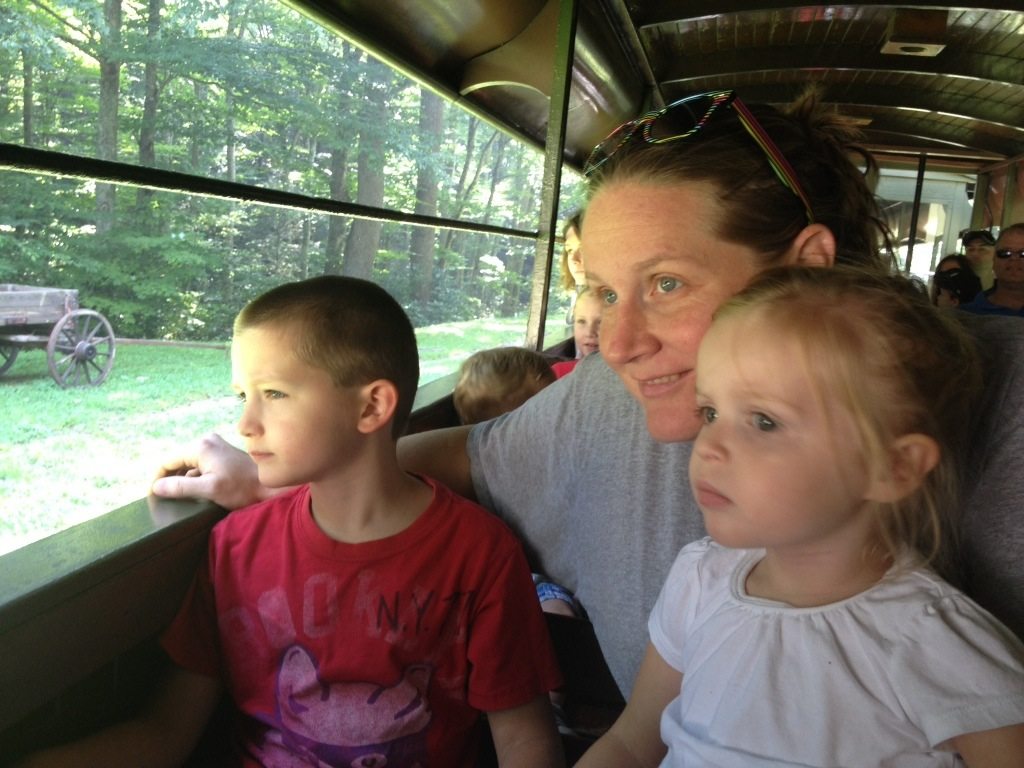 derek’s parents invited us up to blue ridge village for a labor day weekend in the mountains. it was good timing, because isaac’s first week of school was a little rough. for him and me. and, we didn’t accomplish as many items from our summer to do list as i had hoped, and this little excursion would cover a few…

we picked up ike from school on friday and headed straight to banner elk. the grandparents were already there and we just hung around blue ridge village for the night.

on saturday, we headed out to tweetsie railroad. i had bought tickets in june, for when thomas the train was there, but we were rained out. the weather was iffy this time, but we went anyways…

on the way in. not sure why i didn’t bring a stroller.

first things first. we hopped on board tweetsie for the ride around the mountain. and took what is my current favorite pic of me and the terrible twosome.

following along on the map.

the ferris wheel. the most talked about event. and then both kids wussed out.

we also drove some fun little race cars, but i couldn’t get good pics. anna was a horrible steerer. just an fyi for 13 years from now.

then we loaded up to head up to the tippy top of the mountain for some other adventures. and yes. we rented a $5 stroller and let our big kid ride in it. #allstarparenting

chairlift pic of ike with derek.

and of anna with me.

then we waited for an unbelievably long amount of time to ride the mouse mine mini train ride. ps. it’s creepy in the mouse mine.

anna got to ride some littler kid rides. ike was bummed to be suddenly gigantic.

finally, off to the deer park petting zoo.

the baby goats can escape through some of the slats and get preferential treatment by the patrons. so cute.

then. it got exciting. there were some raindrops. and the forecast looked bad. and we were planning on a late lunch with derek’s parents. so we headed to the chairlift. just as i was seated with anna, lightning struck and they announced that the chairlift was closed and i was the last car. close one. about 20 yards from the bottom, the rain really started coming down. derek returned the stroller and went to the car. i dragged the kids through the park in the rain. and met him at the entrance. and off to lunch we went.

on sunday, we went to the outlets for a bit, and i bought some stuff for the baby. specifically, a “baby’s first christmas” outfit. duh. and then we went to the mast general store. the kids were grumps.

we mostly hung out in the room for the rest of the afternoon. anna learned about jenga. she’s not very good.

derek’s parents watched the kids while derek and i went out for a fancy date in the mountains. we went to jackelope’s view. it had a lot of folks way more dressed up than us. and a great view. if it wasn’t slightly cloudy and overcast. :). and mostly delicious food. and a super nice waiter.

that’s pretty much the end. we rolled out sunday around noon or so. and back to real life.