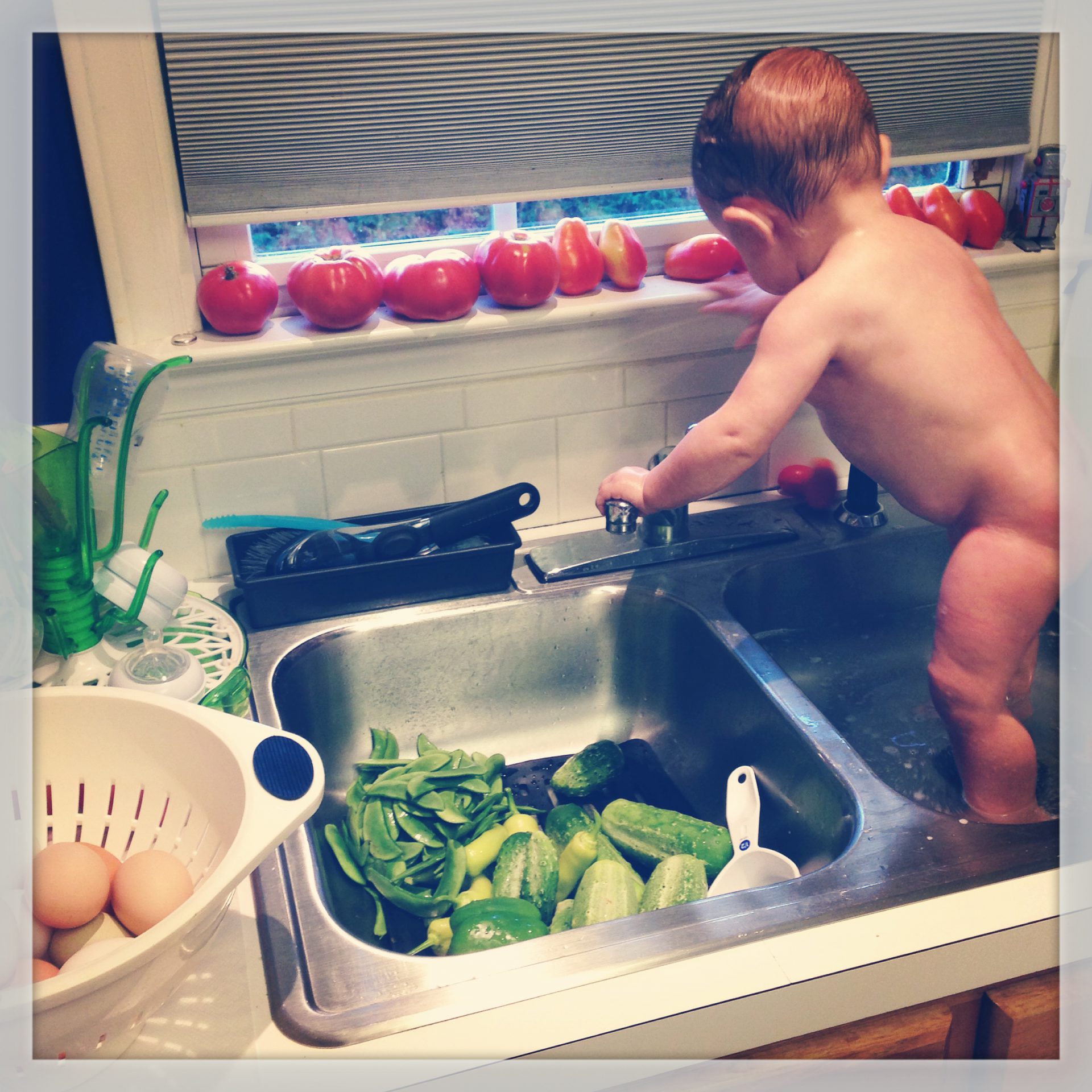 other than our beach trip and our ny trip, we haven’t been doing much this summer. it’s way harder to do things with the treacherous trio that i had ever imagined. i think their age difference plays into that. but, mostly, we just hang out around the house and such. here’s a photo filled post to prove it.

girl bath time. (hazel is pretty much done with sink baths because she tries to kill herself the entire time).

lucy bath time. (derek’s parents were keeping her while we were in NY, so i wanted her fresh and clean for them).

my friend angie got a new puppy. we raced over to visit her. anna was in heaven. if i weren’t already on the brink of insanity, i would almost want to get a puppy.

stair climber. (we put a gate up approximately 14 seconds after this picture).

so. i spend time and money on gardens and herbs and such on the deck. and they all die. and i swear i’ll never do it again. and then. you know. parsley and pretty flowers just randomly grow wherever they feel like.

example of time/money being wasted. my artichoke plant seems to have been overtaken by some tiny little black bug. i’ve left it for now. we’ll see what happens.

i haven’t posted much anna art lately. but, here’s one fun drawing she made. she tells me that it’s a picture of lucy with her standing behind lucy and also with her pretending to be lucy.

derek’s grampa had a 95th birthday. and party. and a photographer was hired. and all of the kids, grandkids and great grandkids were there. in blue shirts. and it was hot. and we hopefully managed a decent pic or two. i think we attempted every permutation of people possible. like a wedding.

the cake had to wait until after picture time. anna scooted right up with paw paw.

the jumperoo makes hazel fall asleep. everytime. sometimes i take her out and lie her down. sometimes i leave her. if i leave her, when she wakes up, she immediately starts jumping again.

we haven’t had the chickens out much since tina fey was violently murdered by our idiot dog. but anna loves them so much, so we’ve been letting her get one or two out to play. our new favorite is chickensarahpowers.

remember that thing about hazel being done with sink baths. here’s the photo evidence of her craziness.

she wanted all of the veggies to join her.

happy girl about to play with all of the play doh colors.

so…
that doesn’t get me fully updated because there’s a zillion pictures on my phone.
and approximately 1/2 of them are of isaac’s floor, taken by anna.

anyhooooo…
that’s all.
we are so boring.

One Reply to “random summer happenings.”