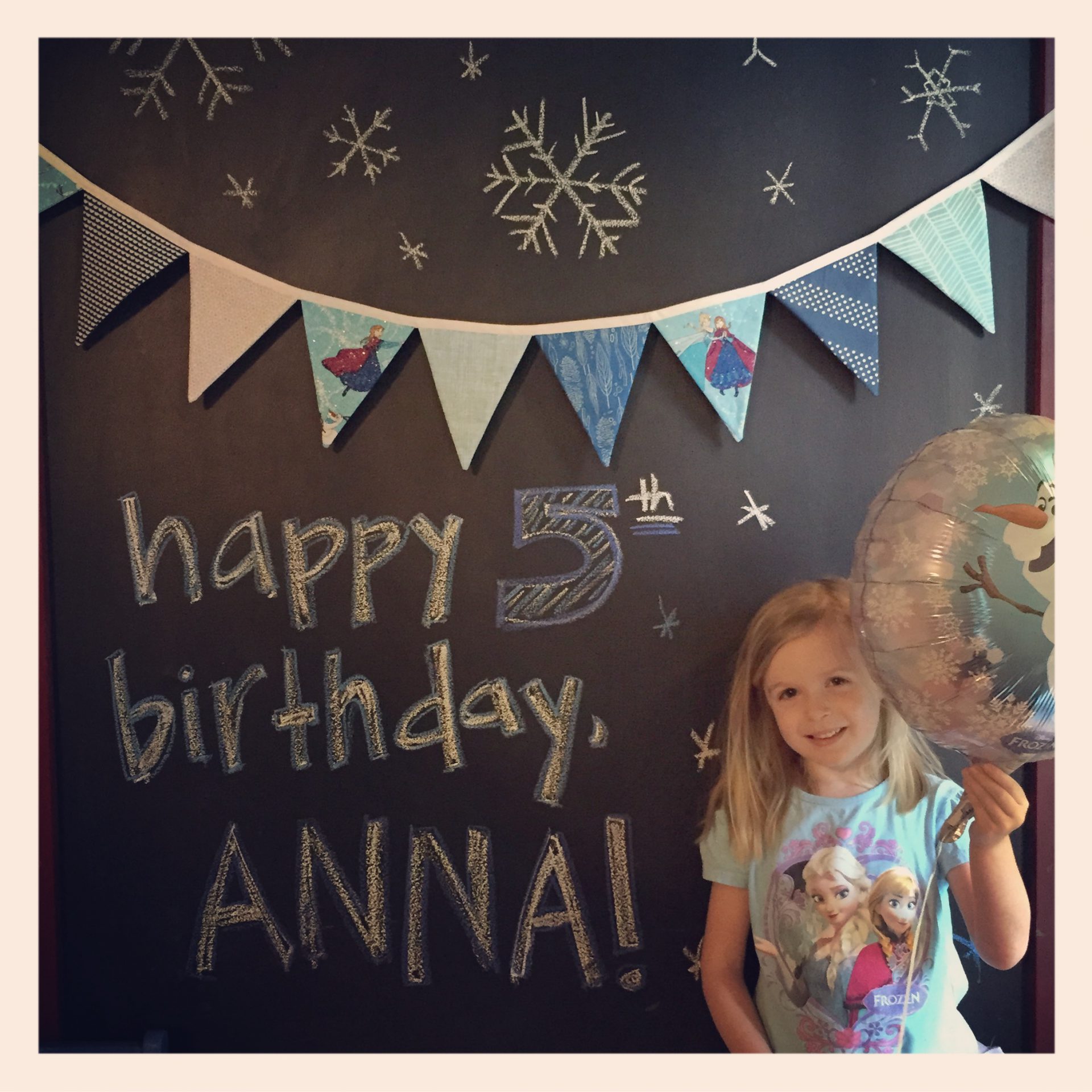 on friday, may 8th, the anna baby turned five. 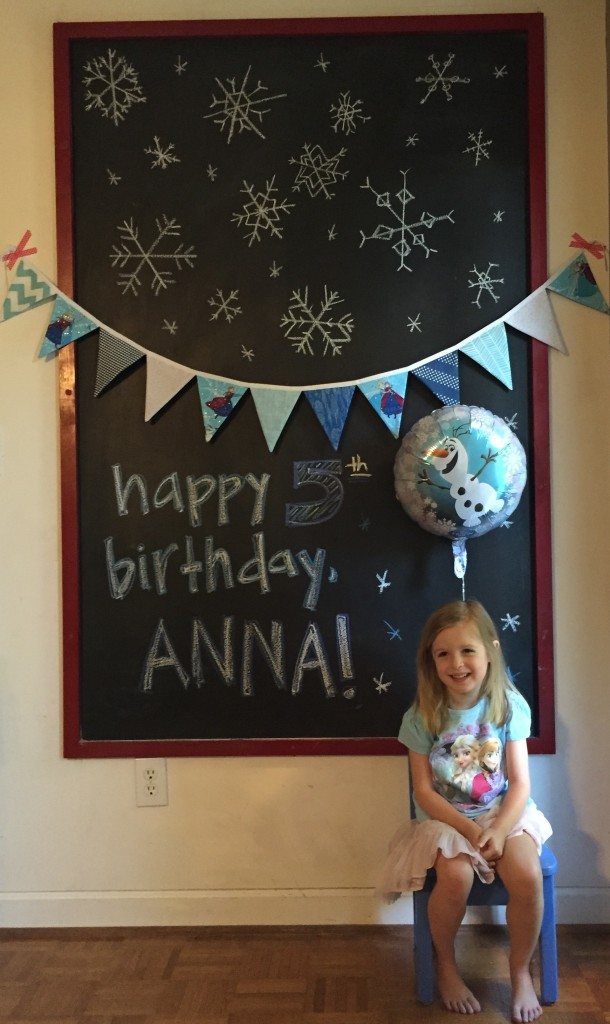 we kicked things off with a frozen themed photoshoot in front of the big chalkboard. 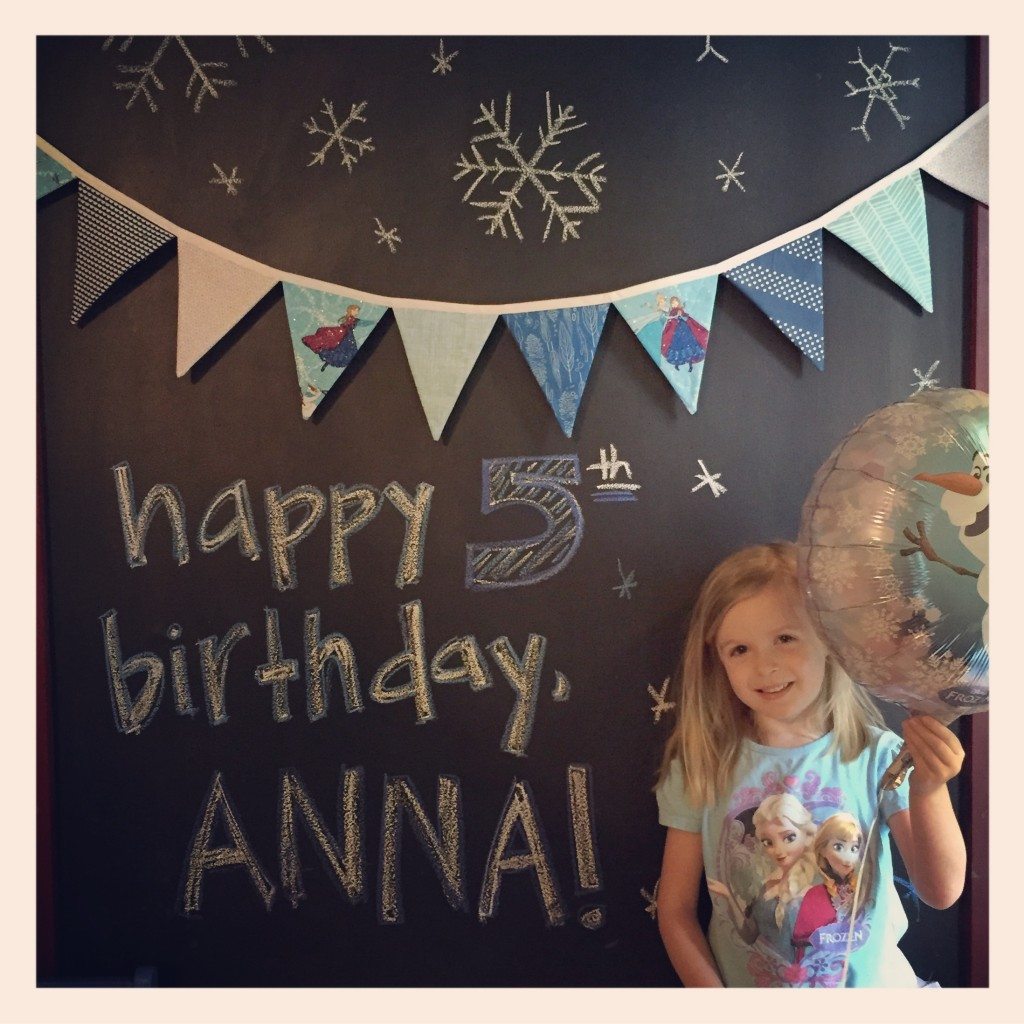 and then an oatmeal breakfast complete with a birthday candle. 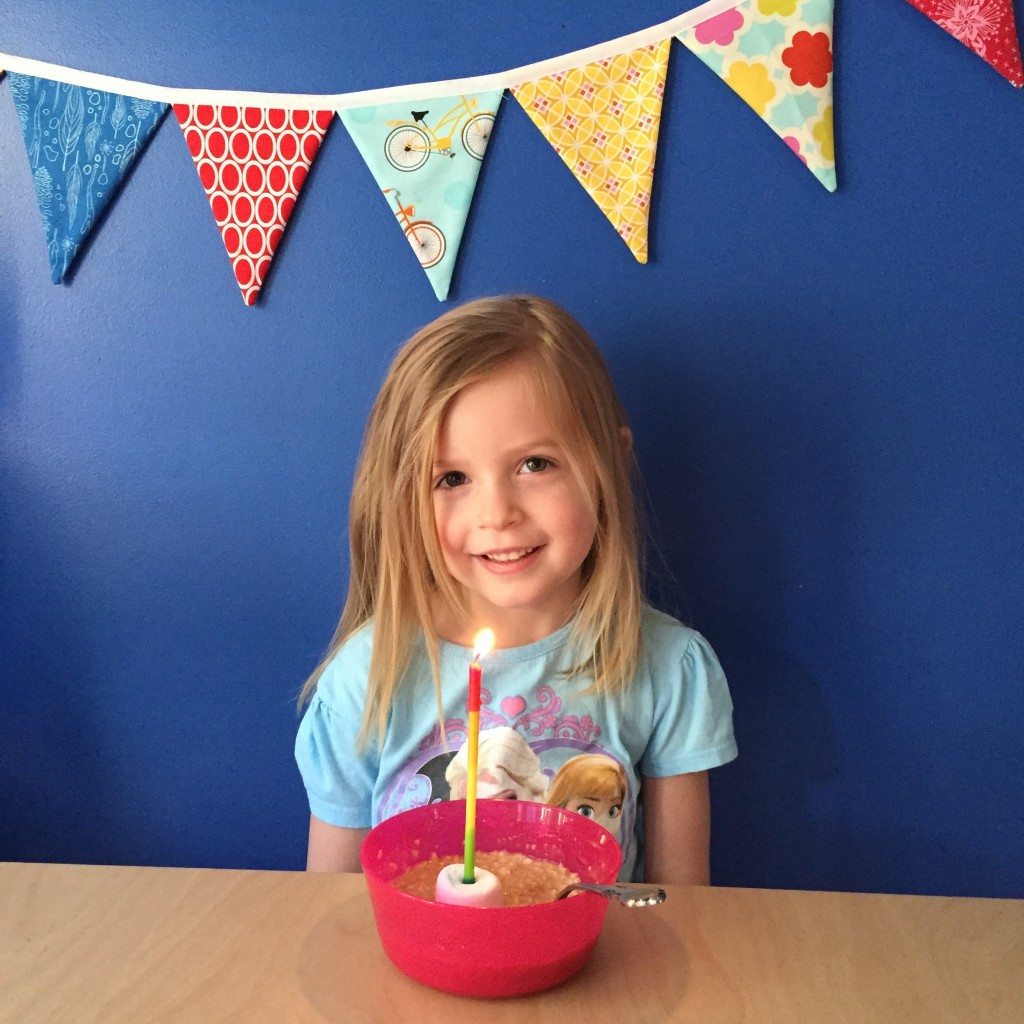 at school, she had a little birthday celebration, complete with gramma stopping by to read knuffle bunny and a rousing version of the happy birthday song. 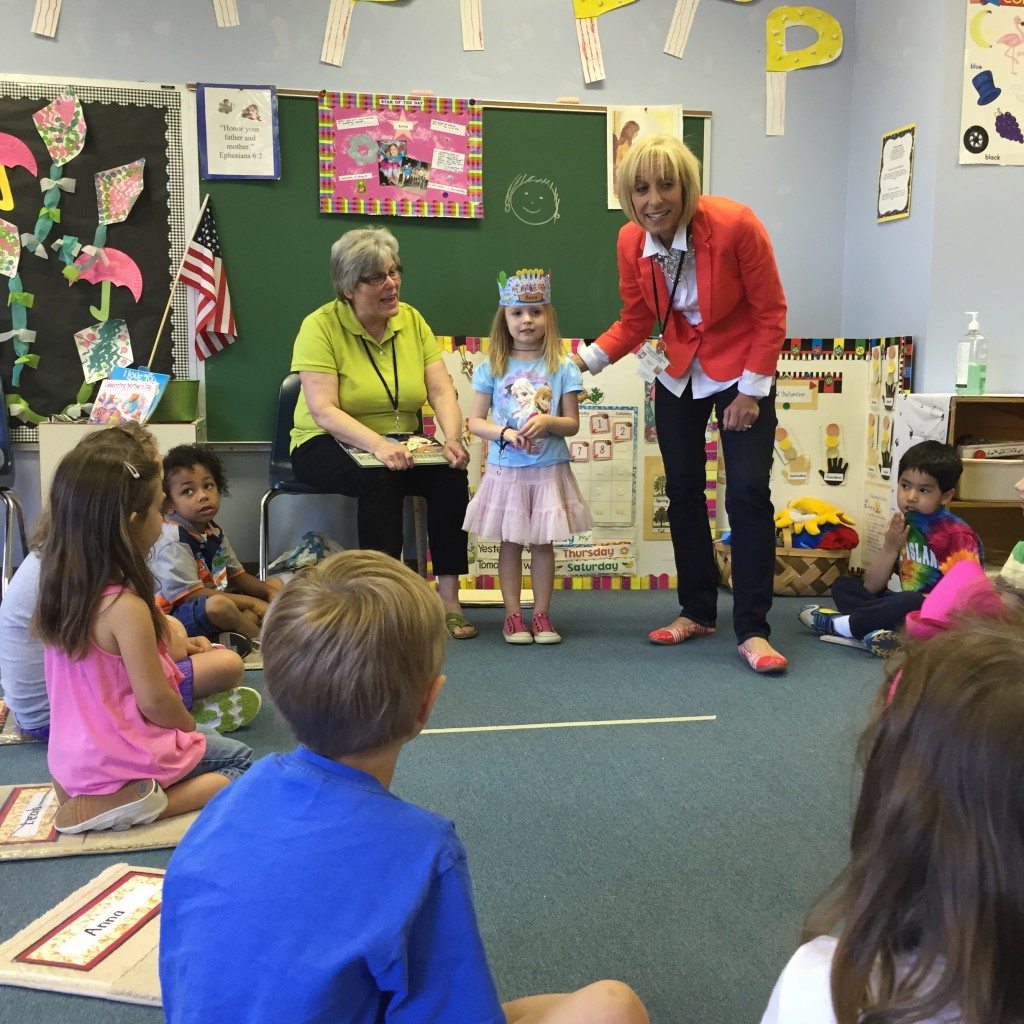 i slaved over a delicious batch of frozen themed cupcakes and anna chose doritos as her favorite snack. it was also mrs. lichtefeld’s birthday, so another mom brought in fruit, to tone down the processed sugar overload that i supplied. 🙂 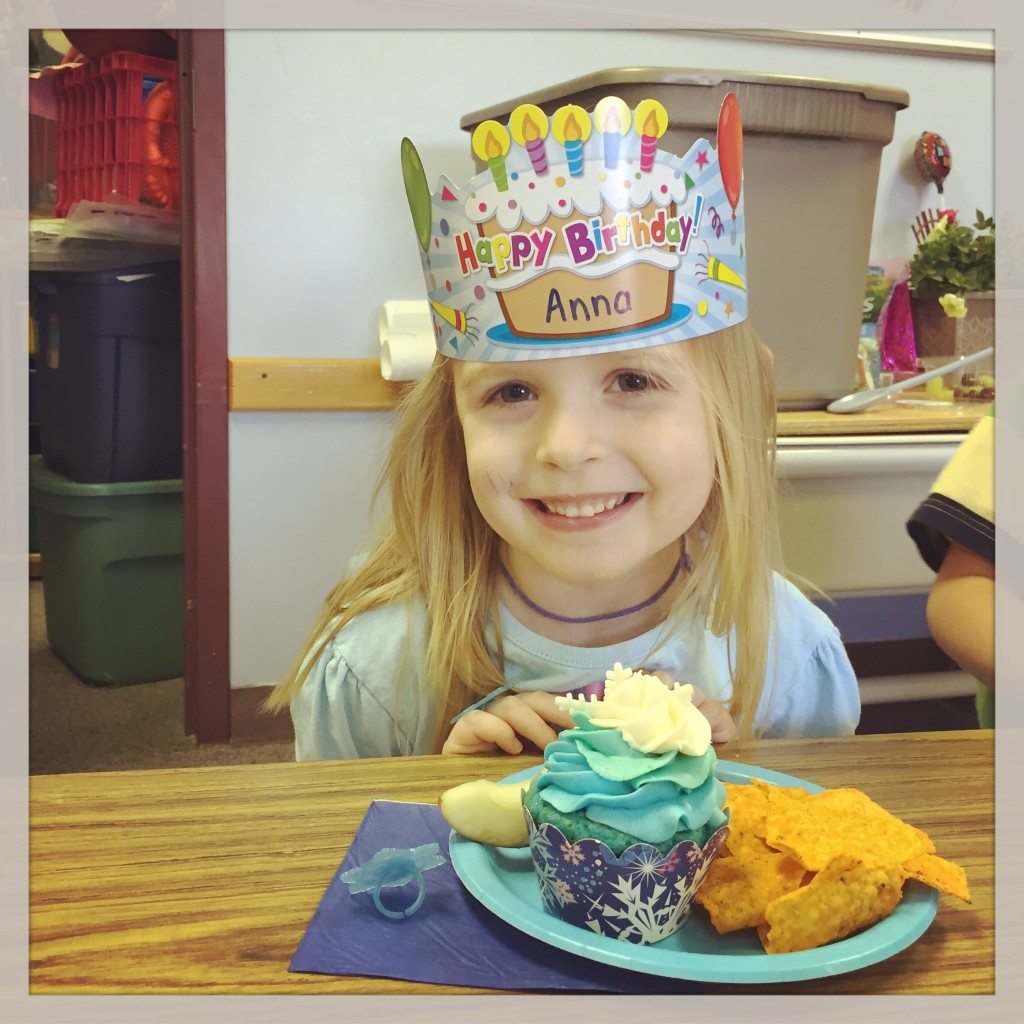 i left anna to run to isaac’s school for field day and she and hazel got to spend the afternoon with gramma. then, just as gramma left, anna’s teen bff, natalie showed up. they ate pizza and played outside and played with the dollhouse. then, they snuggled up for a movie before heading to bed for a sleepover. 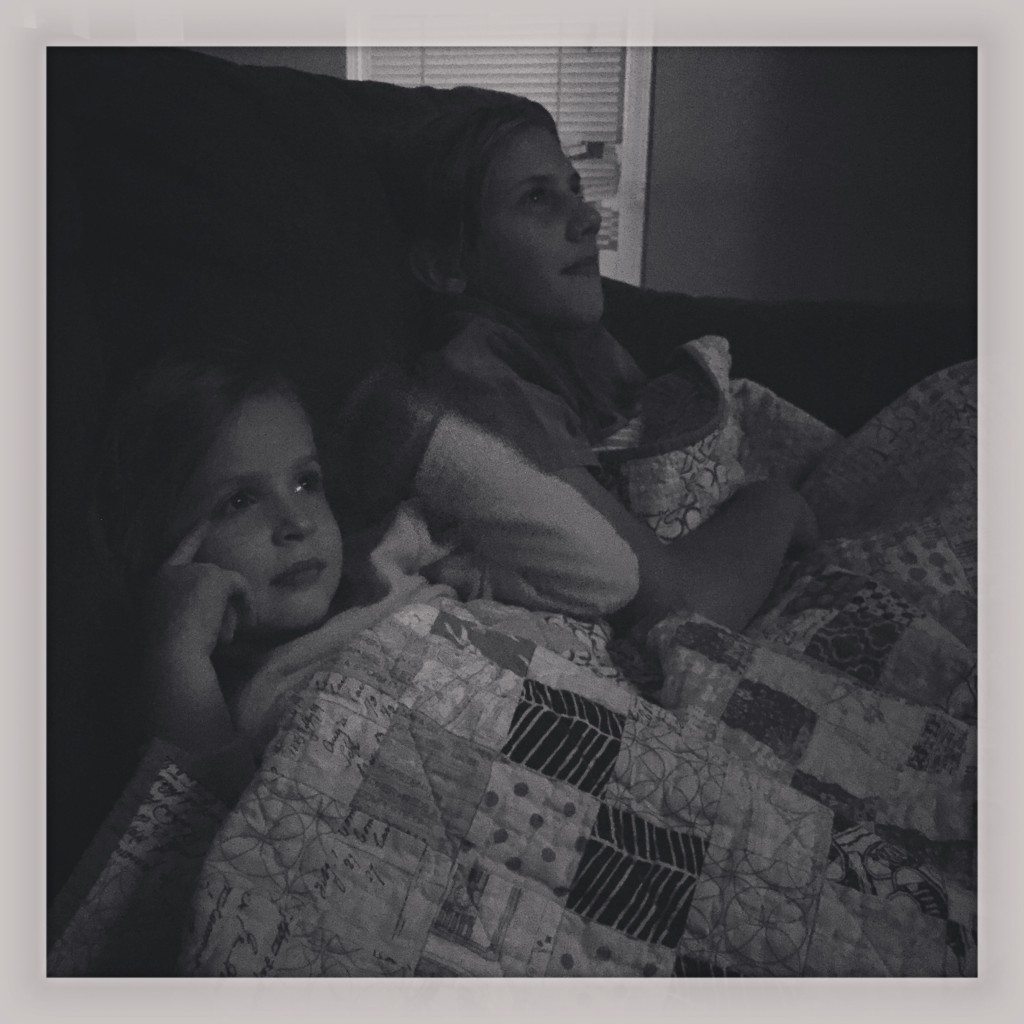 now. a bit about theannababy.

she’s loves to read, write and draw. in fact, she’s a fantastic artist. she’s just starting to sound out words, with the help of isaac. she’s not too shabby at math, either.
she’s a strong willed, spirited little thing. sheesh. when she gets an idea about how things are going to go, she digs in and fights tooth and nail until the end. we’re working on compromising and not always getting your way. it’s a long and tough road, i suppose.
she can be the sweetest little person you’ve ever seen. always asking for one last “hug-kiss-snuggle”. although, that might just be a delay tactic, too. ;).
she loves to garden, especially with gramma. as evidenced in this blog time and time again, theannababy loves loves loves the chickens.
she and isaac have a love/hate relationship. they sure can press each others buttons. she definitely likes to play with hazel, who until now has been decidedly less opinionated, although that seems to be changing. she loves to pick out matching sister outfits, which are oftentimes ridiculous.
her favorite thing in the entire world is princesses. mostly elsa. and frozen. but, any disney princess will do in a pinch. she likes to read about them. watch movies. draw and color them. we have barbie sized, doll sized and little tiny figurines with clip on dresses of most of the princess. it consumes her (our) life.
she’s turning into a little person from a baby so very fast and i’m so excited and so sad all at once.

anyhoooo…
i might add to this later, but i really want to post about the PARTY tomorrow, so i wanted to get this in tonight, before the massive undertaking of blogging about the epic frozen extravaganza. 🙂