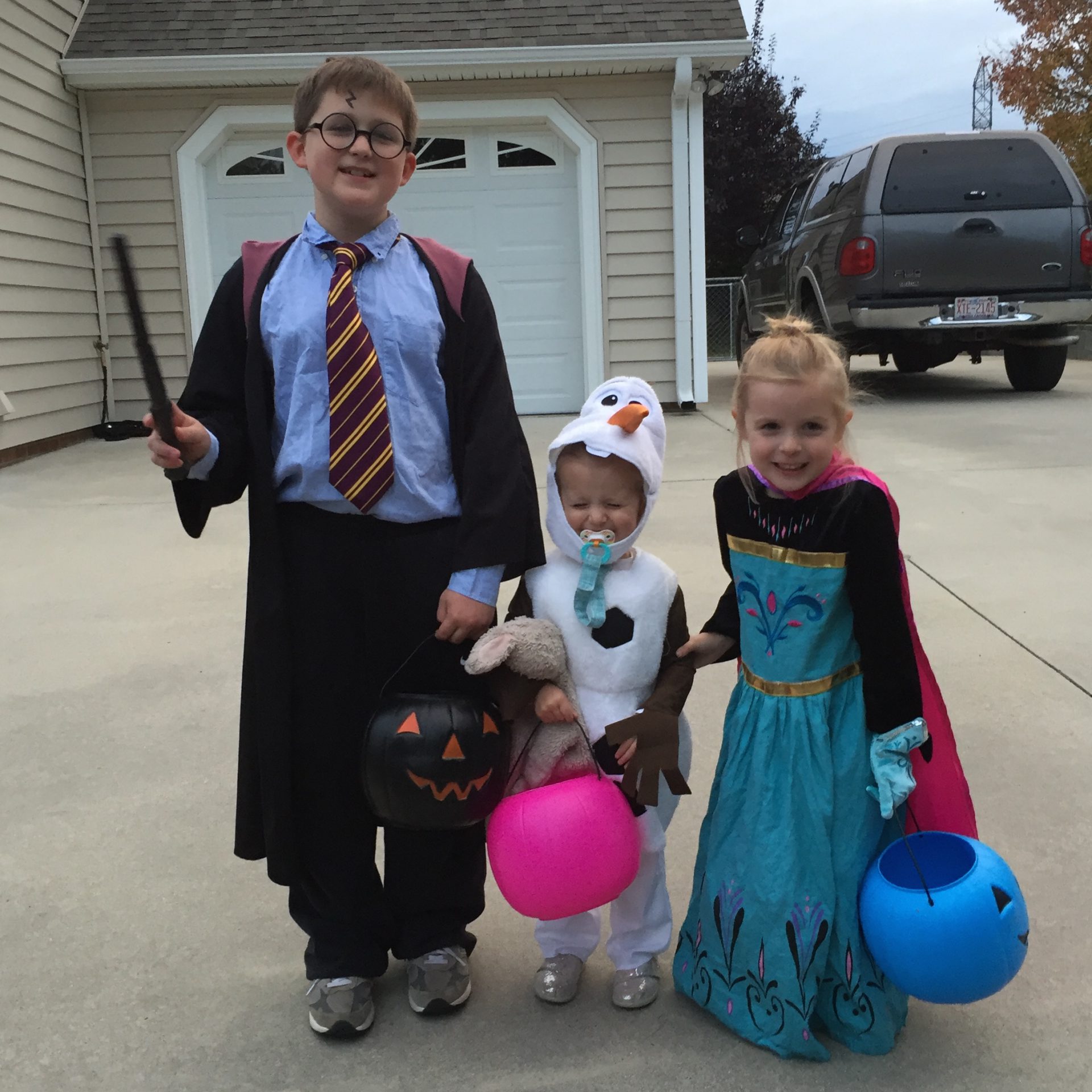 yesterday was halloween. obviously.
and it was a saturday. so we had all day to get worked up about it.

all along, the plan was for isaac to be harry potter. hazel would be olaf. and anna wanted to be a mix of darth vader and a princess. we just weren’t sure if it would be elsa or sleeping beauty. then, as we tried on costumes, there was some waffling.

anna thought maybe it would be fun to have sister dragons. 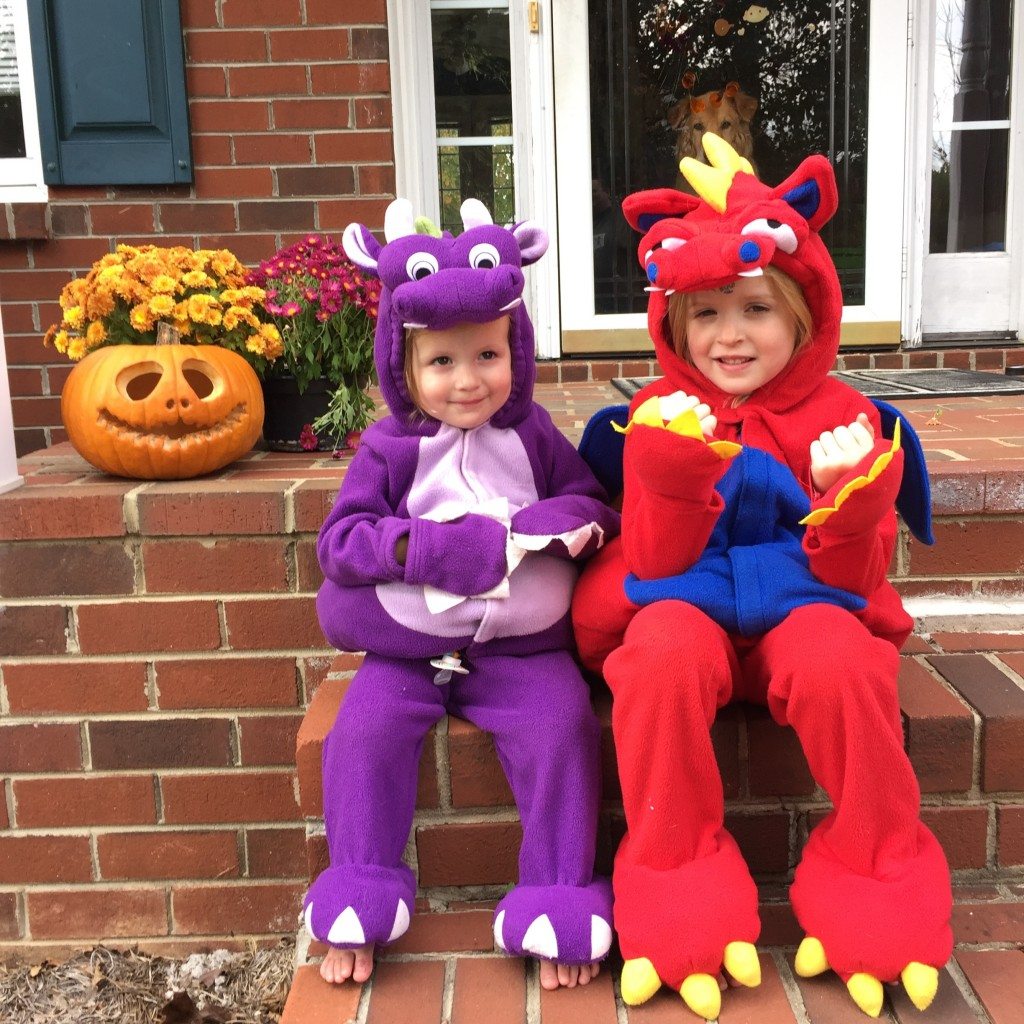 then, not. hazel kept talking about being foofa (old anna costume) but would switch to brobee, which we don’t have and in the end, i was pretty worried should wouldn’t like anything, because she wasn’t a fan of headwear.

anna decided to be JUST elsa, with no darth. hazel finally obliged and went with olaf as planned. and ike was harry potter.

but, first things first. some friends from school came over for a little pregame living room picnic. the younger kiddo is in isaac’s class this year and i’ve gotten to know the mom thanks to room mom duties/fiasco. they were actually at the old school before this year, and we were acquaintances, but it took the nerd class for us to get to know each other better. 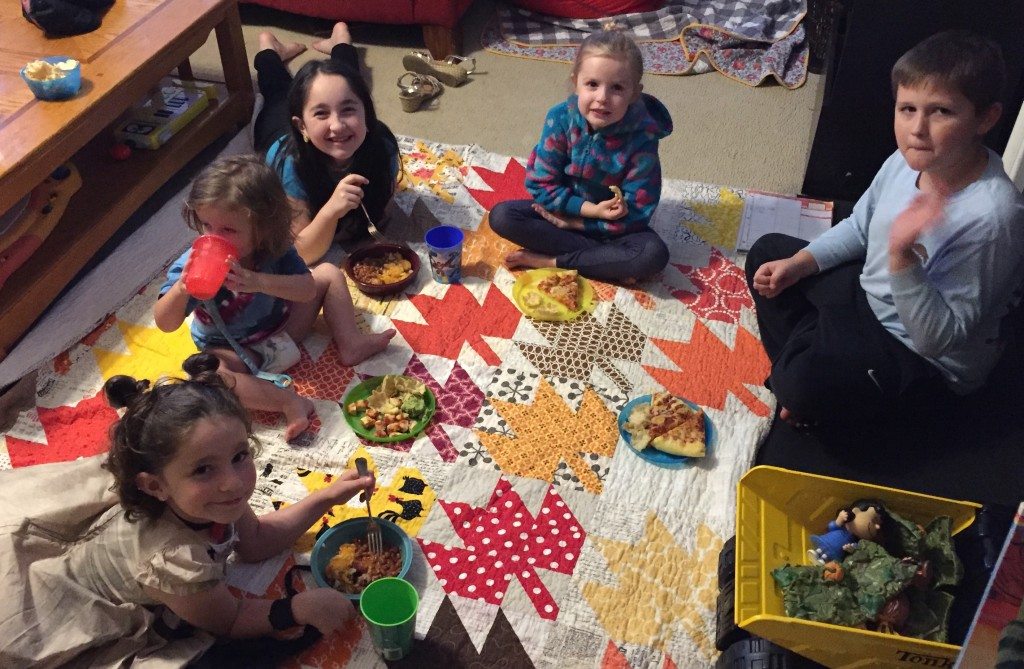 anyhow, after dinner, there was a whirlwind wardrobe change and we were on our way. but first, a photo shoot, of course. 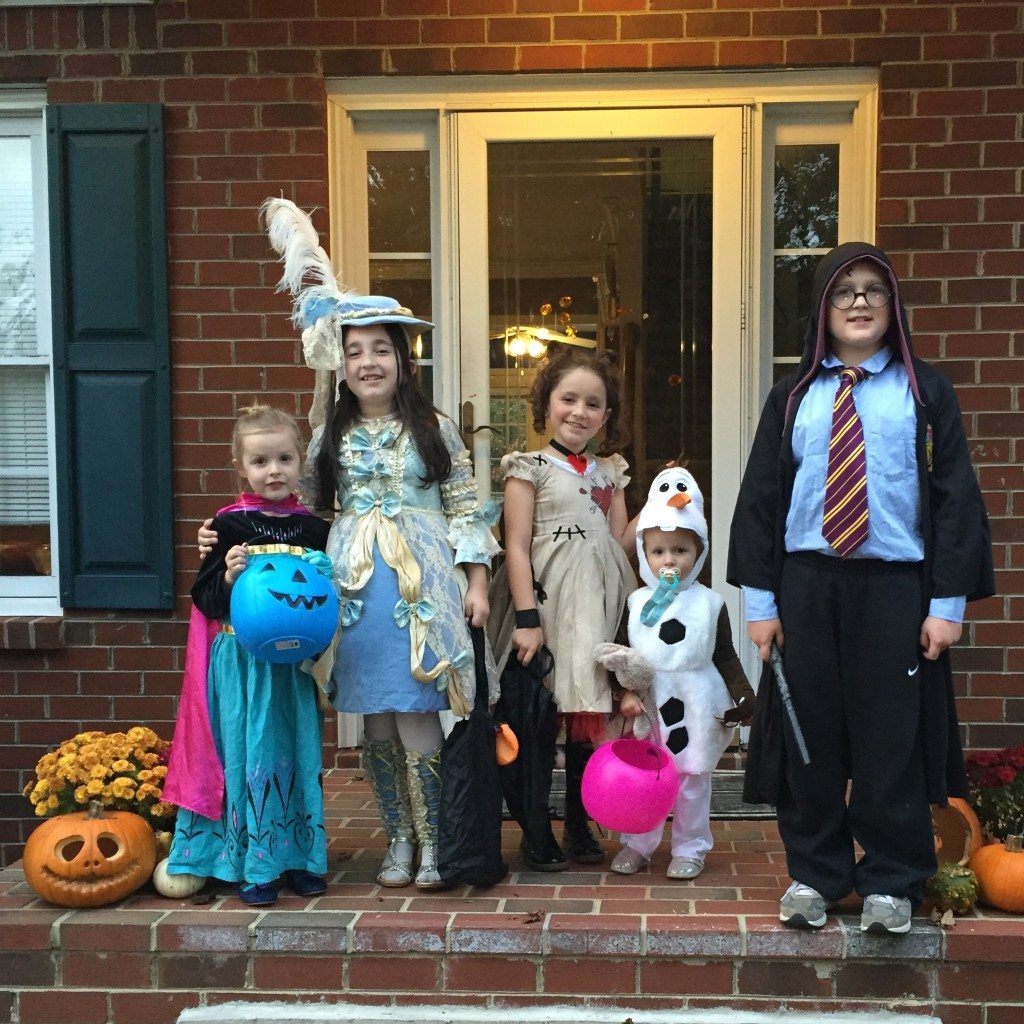 the older daughter of our trick or treat friends took to hazel like a little mom and was very patient in escorting her around, teaching her the ways of asking random strangers for candy. hazel picked up the skills easily and gladly wore her olaf head, once she discovered it’s magical powers to give her candy. 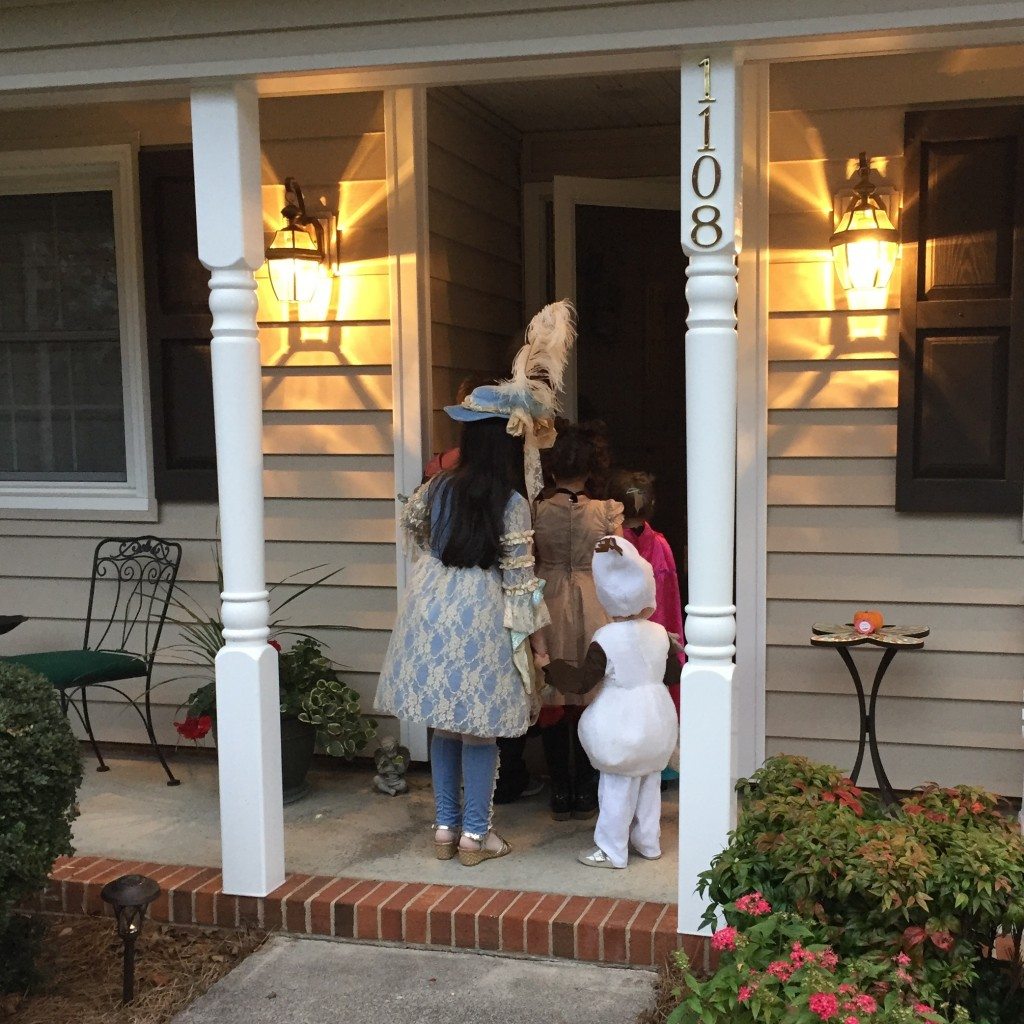 i realized i never got a shot of just my kiddos before we left, so i stopped in this super pristine driveway for a quick pic of potter, olaf and elsa. hazel and that smile. 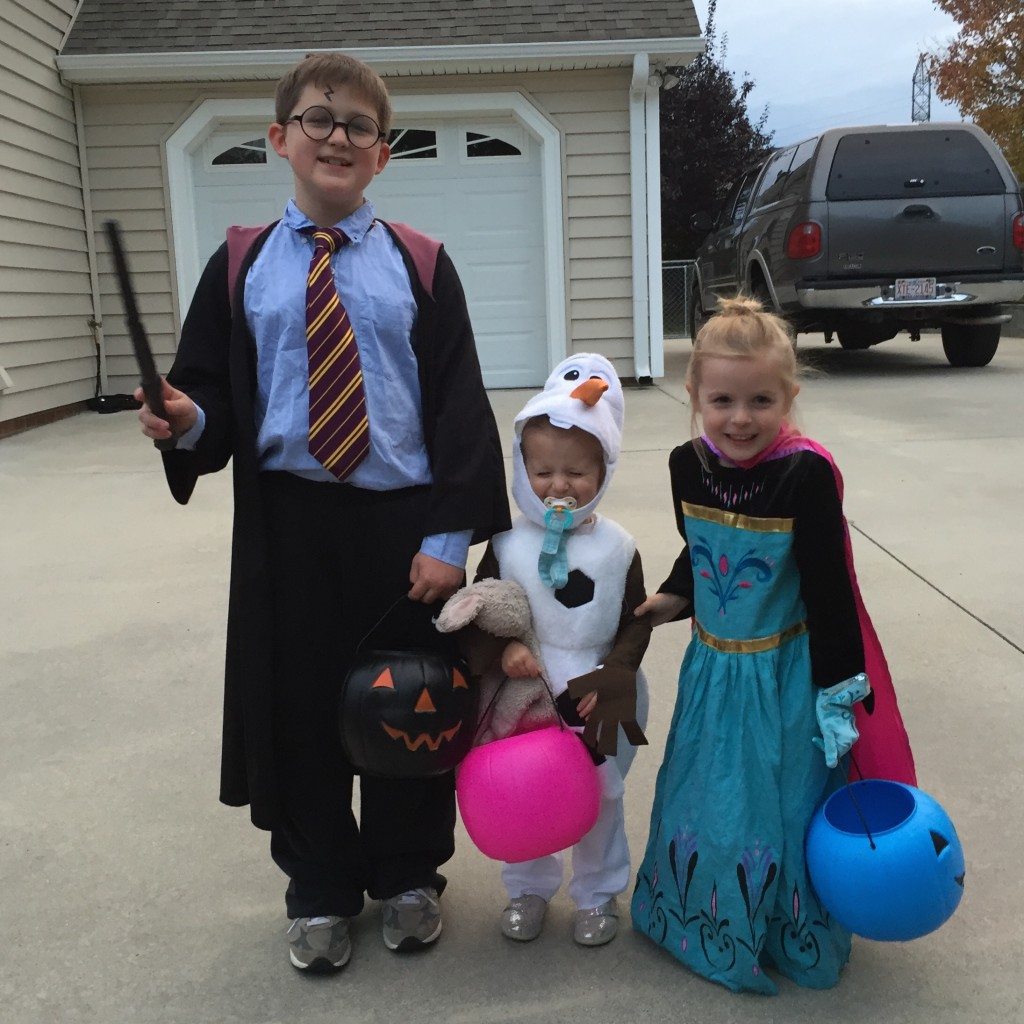 close up of the boy who lived. 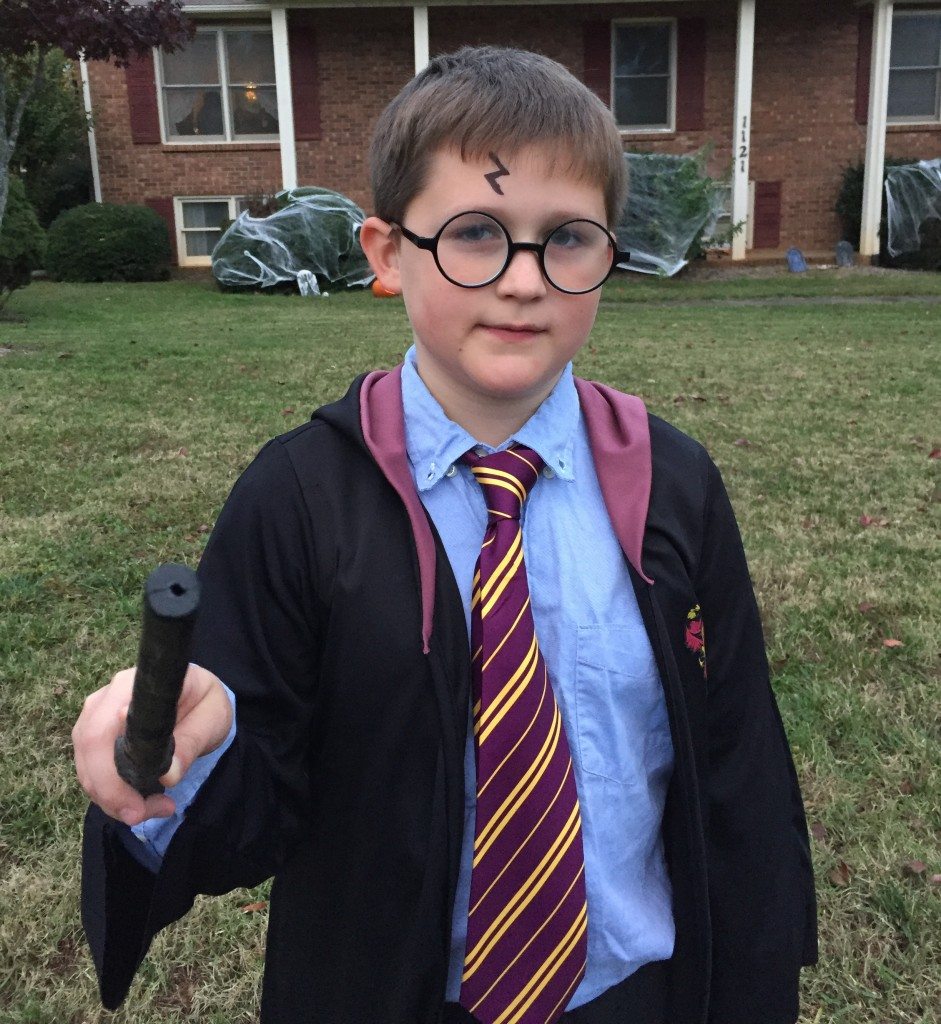 and the (giddy) ice queen. 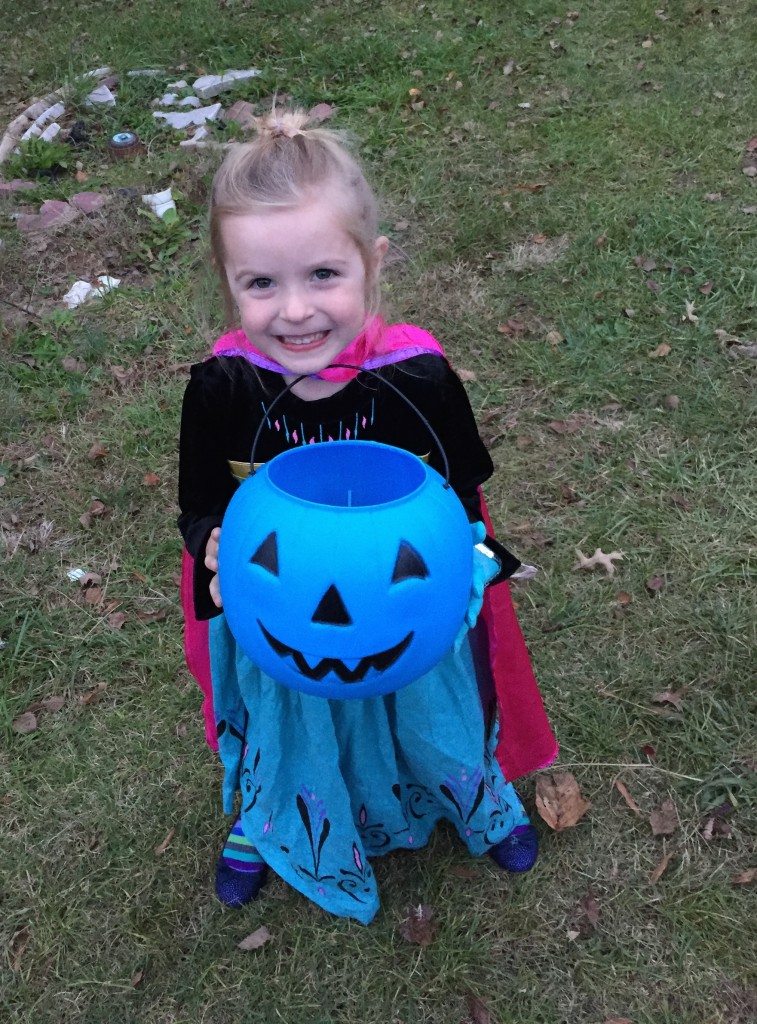 hazel was a trooper, marching up to each house, but after awhile, she just dug into her candy and let the big kids do their thing. 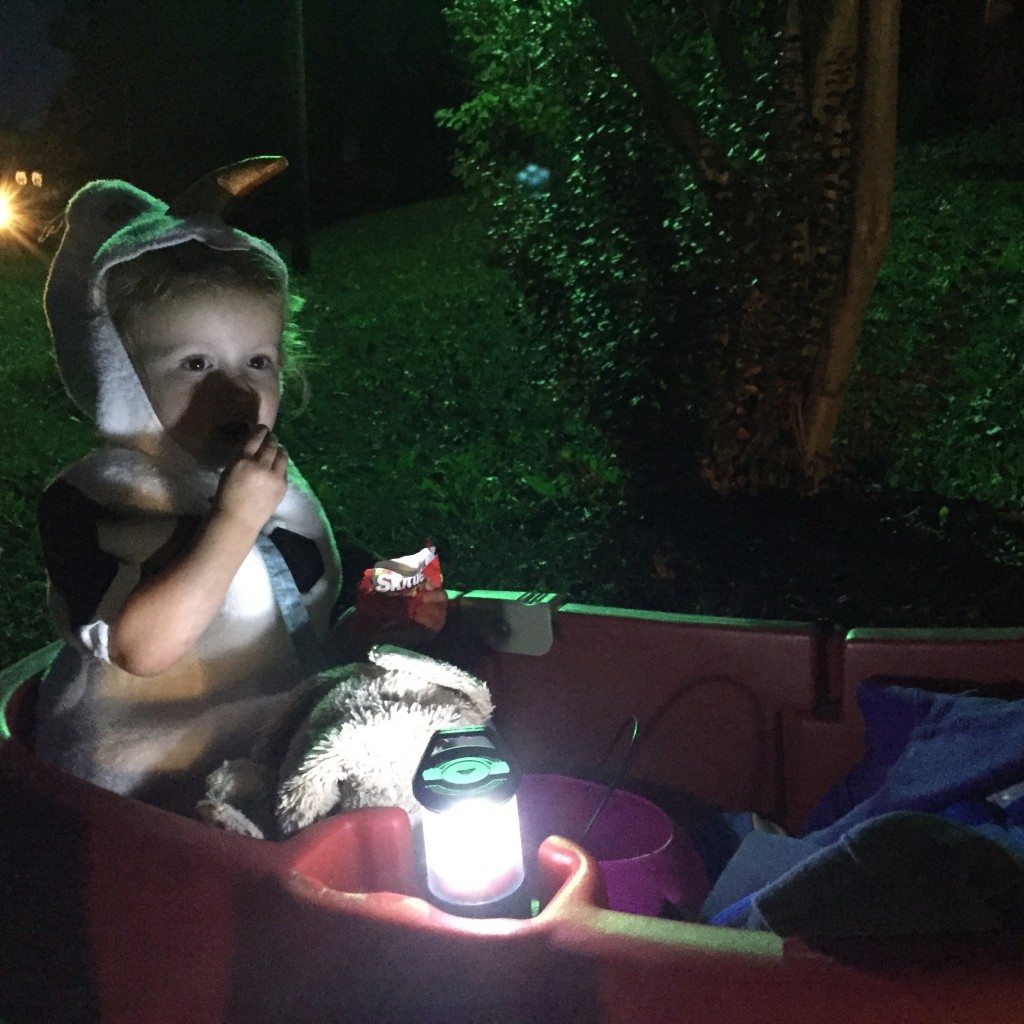 there were lots of spooky houses, but this one was the scariest. the older kids were a little tentative and anna vetoed it completely. 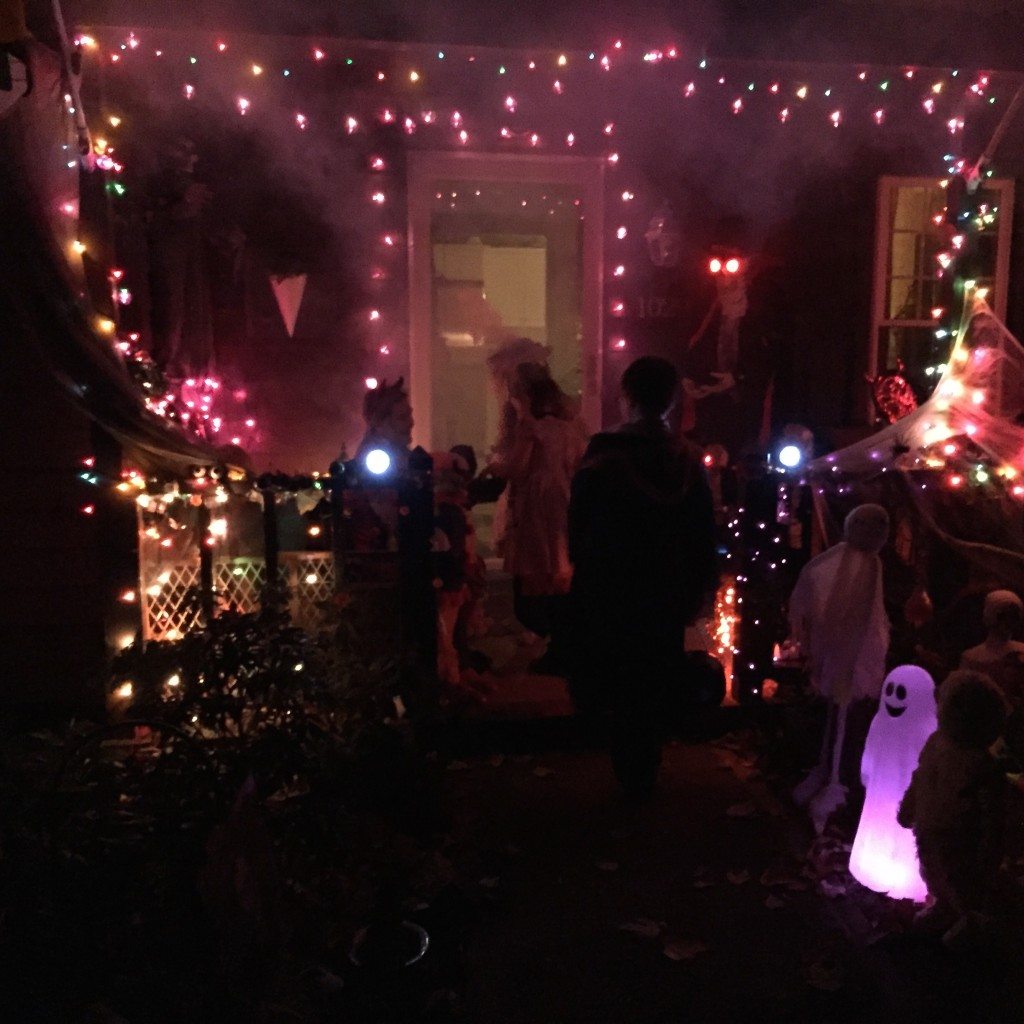 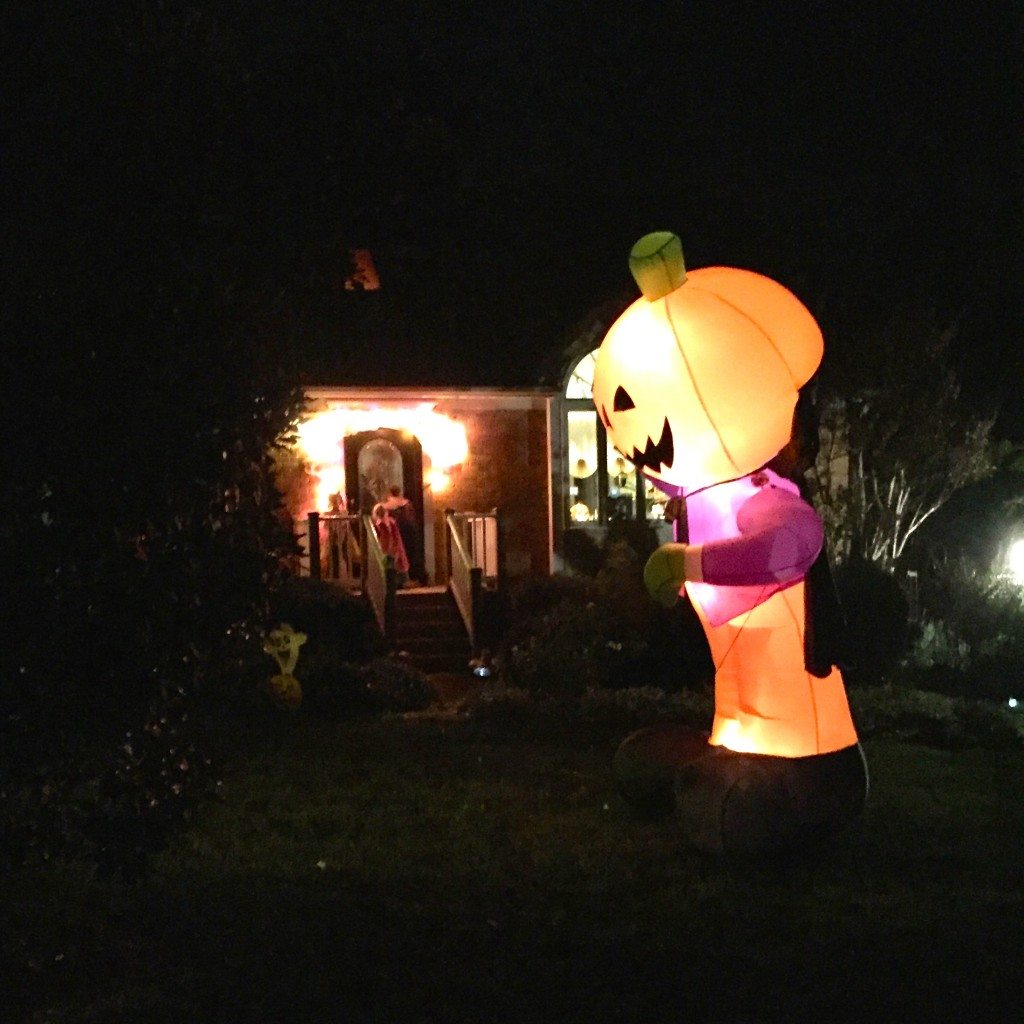 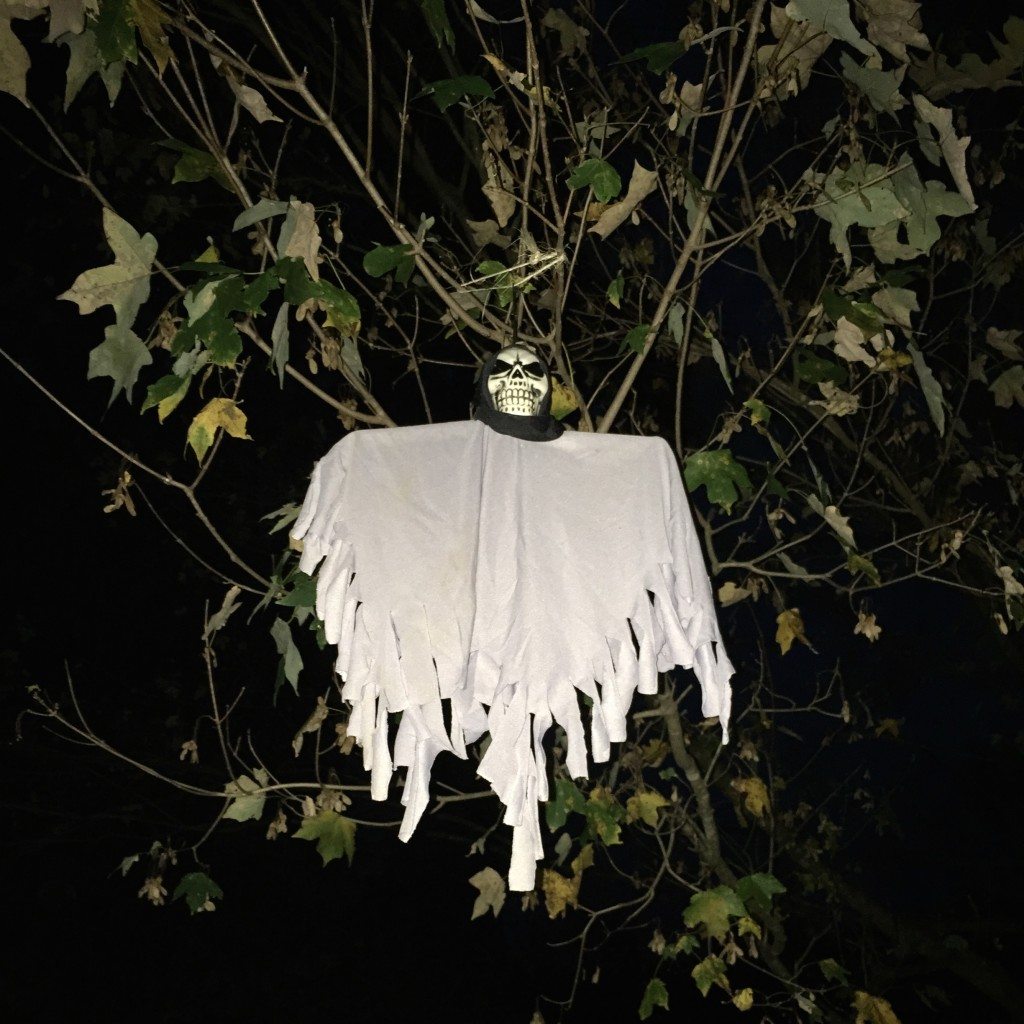 allow me to rant for a second. if you decorate your house with all manner of fall/halloween/pumpkin decor, and the path to your front steps is a steep hill, and you turn all of your lights on, you’d better answer your freaking door and hand out some candy. you’re lucky i didn’t run home for some eggs after watching at least 3 kids fall down your hill on the way back from NOT getting any candy. jerks. ok. end rant.

after about two hours, we finally arrived home, where the unloading and trading and negotiations commenced. 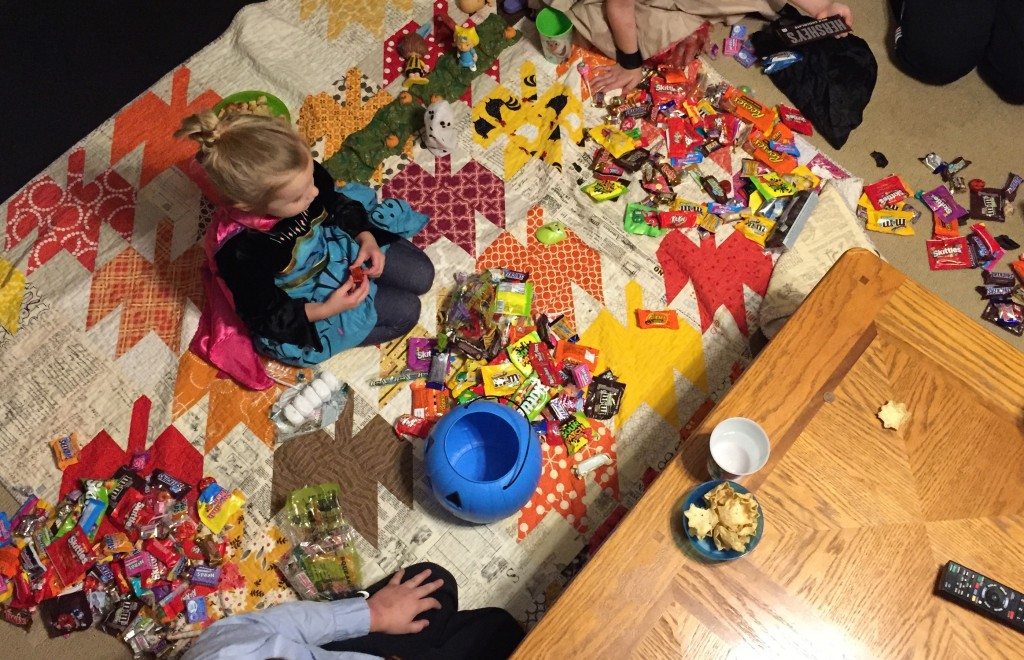 we pretty much let them have a candy feast for a half an hour or so, while we watched the great pumpkin for one final installment. hazel got crazy loopy and ran circles and giggled and twirled and drooled and ate as much candy as possible. anna quietly consumed the most candy, while everyone else traded and talked. and isaac stuffed himself and then this:

(then, he threw up. obviously.)

finally, everyone crashed from the sugar high and we all piled into bed. it’s “fall back” and we were supposed to get an extra hour of sleep. or something like that. tell it to isaac who was talking to me about something at 3:37 in the morning.