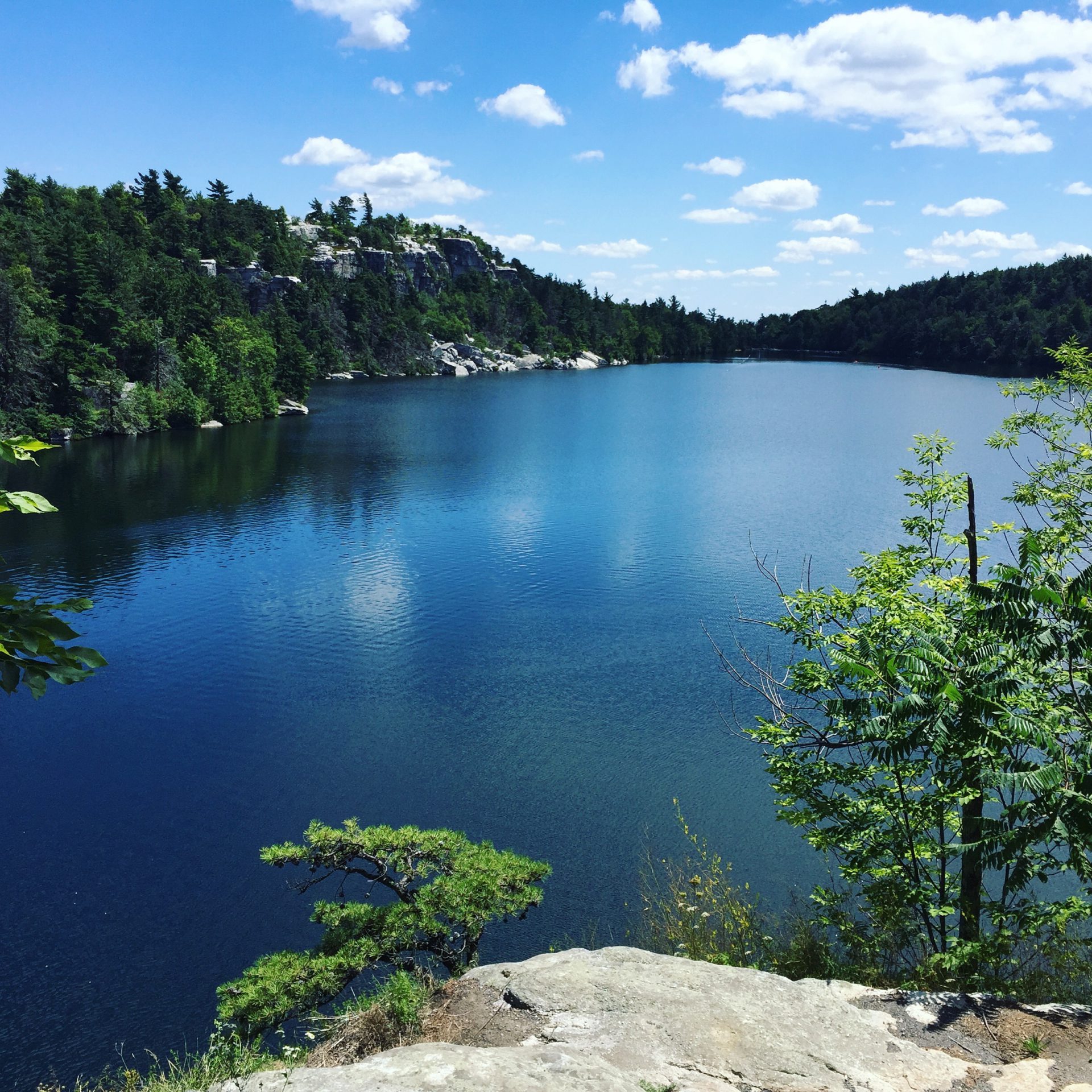 our third week in accord (and our last week in new york state) started off with car trouble, as mentioned in the previous post. so, we were stuck to the campground, while derek handled overseeing the repair of our trusty steed.

on sunday, since we had a late start getting to the pool, all of the umbrellas and tables in the shelter were half-heartedly claimed by various towels and floaty toys, despite there being no actual bodies to be associated with each area. so, we claimed a delightful sunny spot on the hard concrete. i love people.

later that night, still campground bound, we took a bike ride out a trail that derek had scouted on a previous trip with the kids. at one spot, we were able to climb down a bank to a little stream. it was moving pretty quickly and the only kid who wouldn’t be swept away was ike, and only if he scooted along on his butt.

meanwhile, the girls and i moved rocks to try to change the water flow of the stream. you can see it, just behind isaac. it was crazy, as the water got faster and faster, the size of the rocks it was able to sweep away. 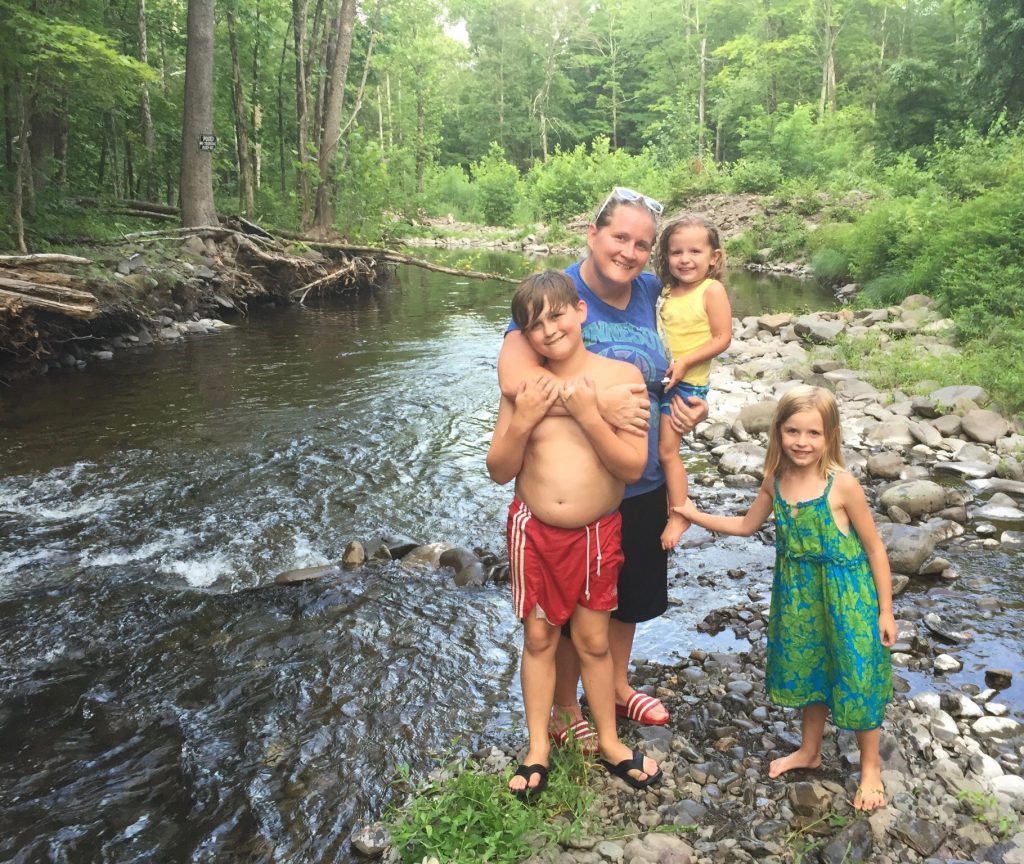 the next day, we were lazy bums, while derek rode to meet the van to be towed to a honda dealership. hazel has suddenly become obsessed with thomas the train, so we made some “tracks” with washi tape and got a good amount of playtime out of that. also, yes, i do realize she’s very grubby. 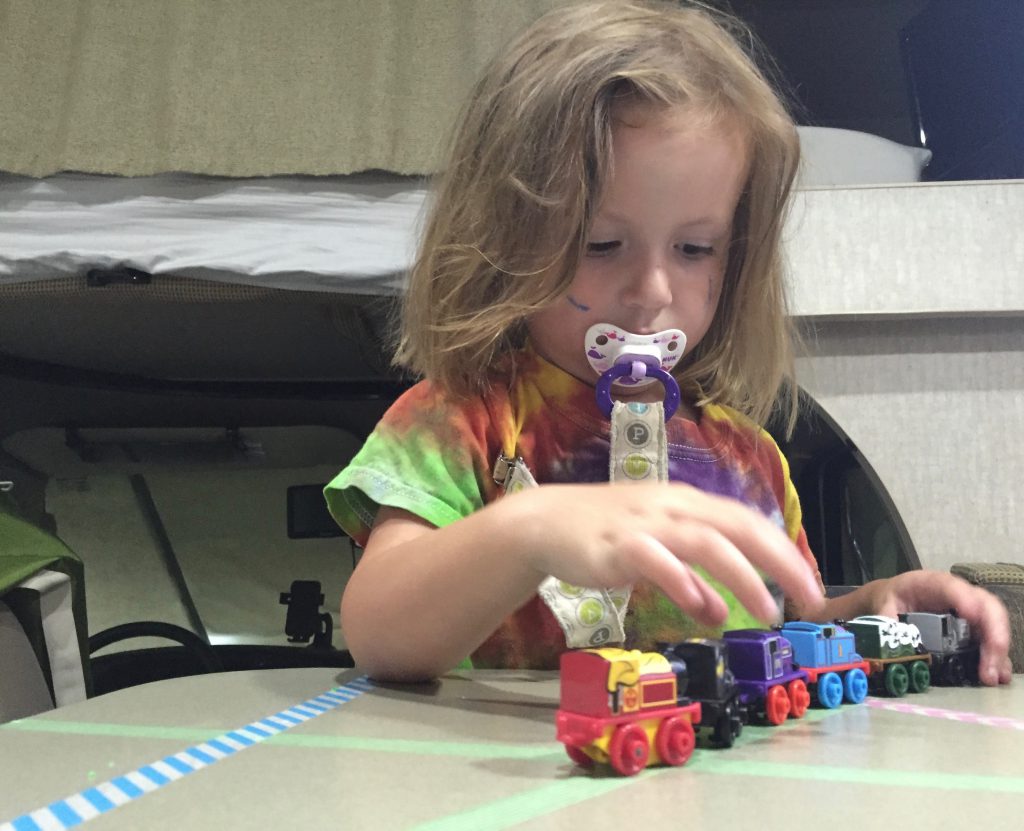 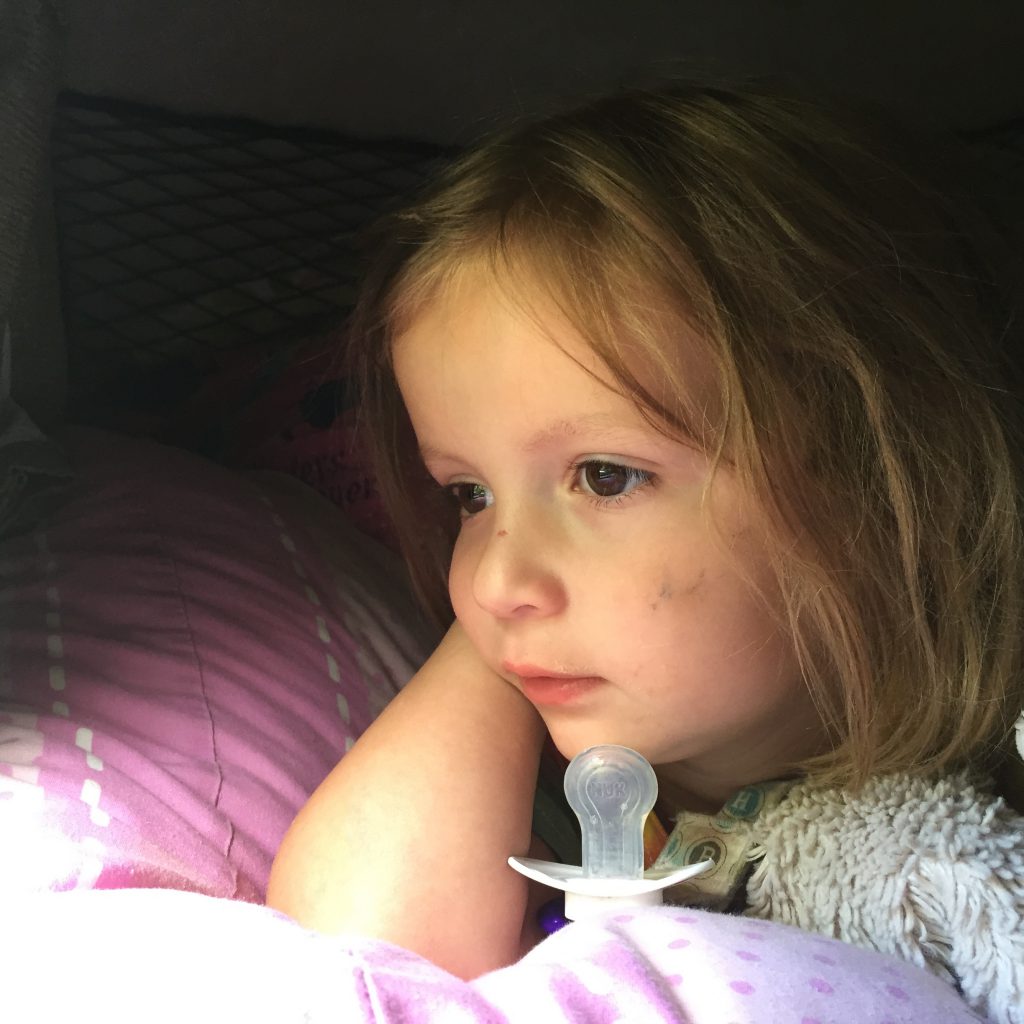 anna and a giant roasted marshmallow. (a poor purchasing decision – they don’t roast the same way and they throw of the proper marshmallow:chocolate:graham ratio in a s’more). 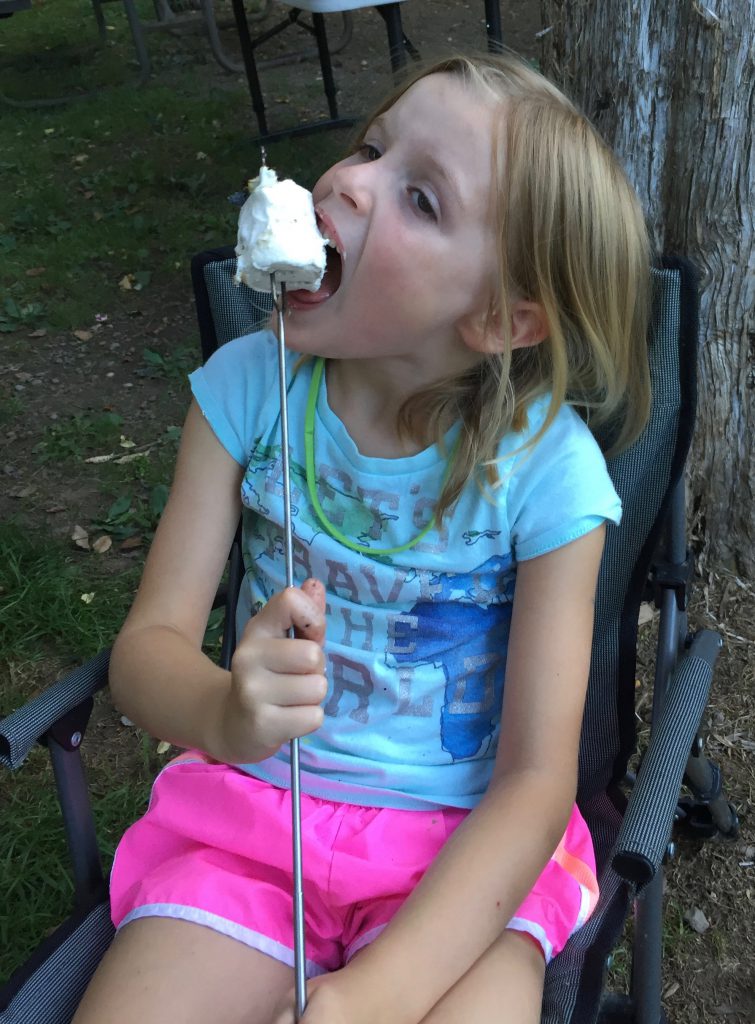 after a few lazy days while our car was on the mend, we returned to minnewaska state park, where there’s a lake at the top of the mountain, with a little swimming area for the general public. 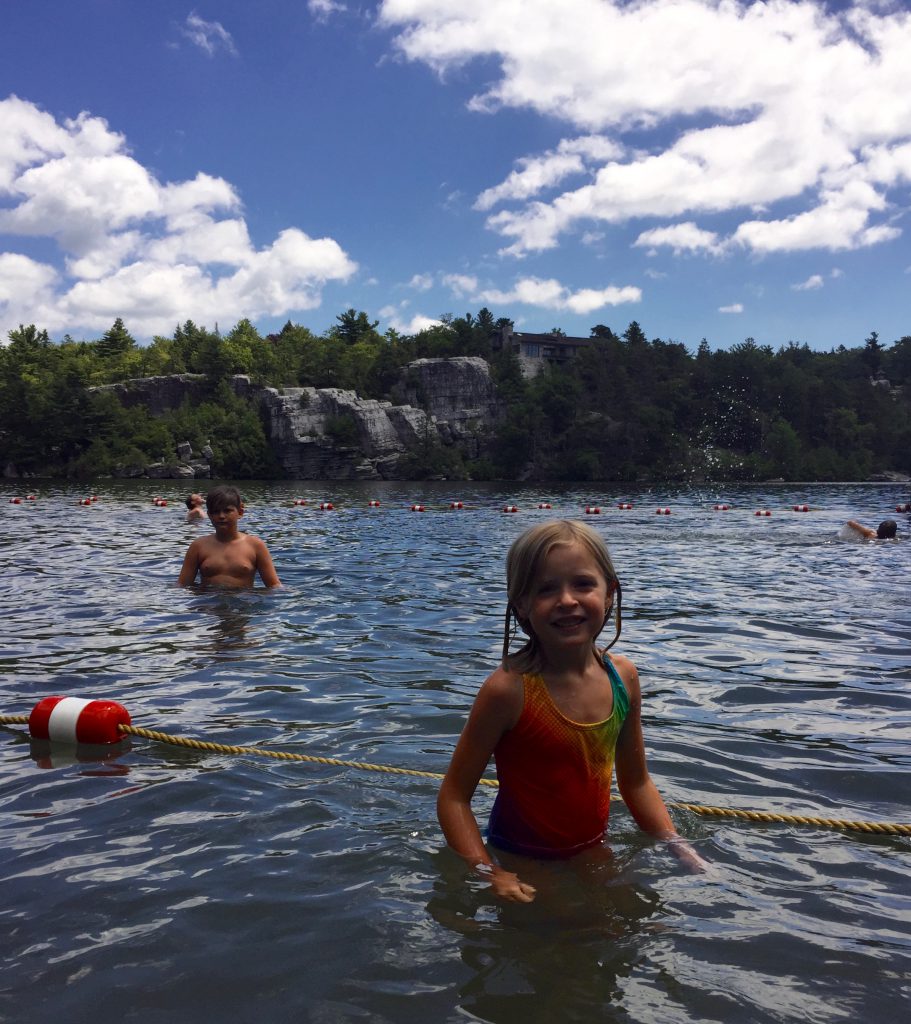 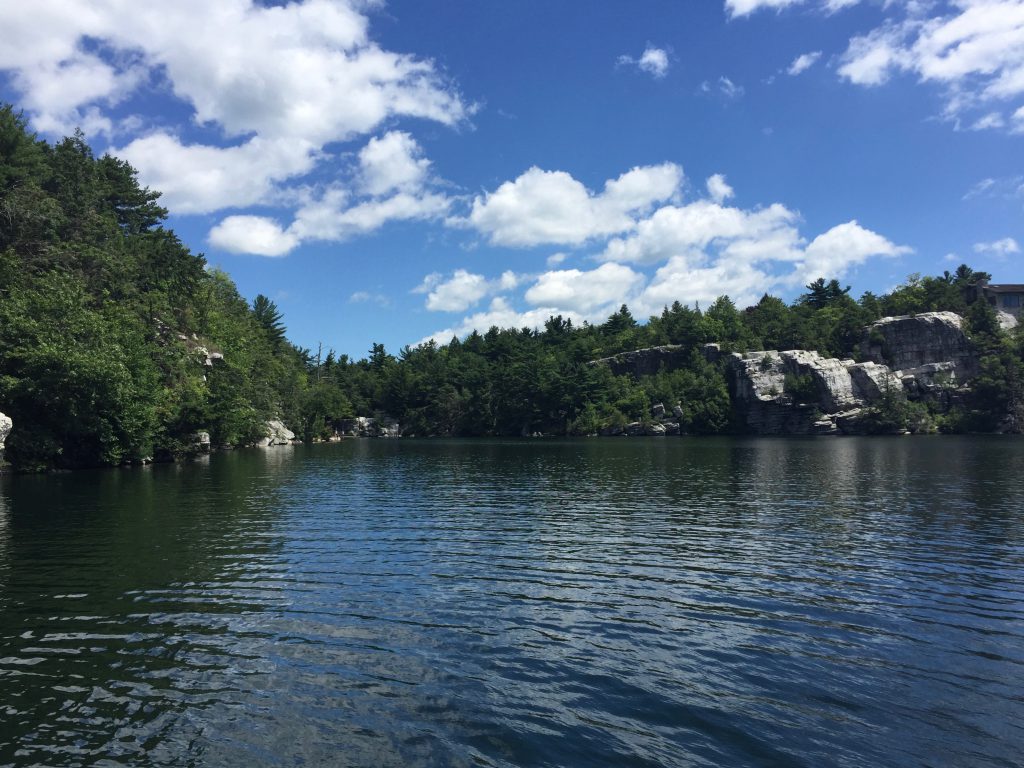 it got deep pretty fast, but it was marked off to keep the tiny folks safe. isaac worked his way out further and further until he was jumping into the 12 foot deep section. some cropping makes this pic look cooler than it was. 😉 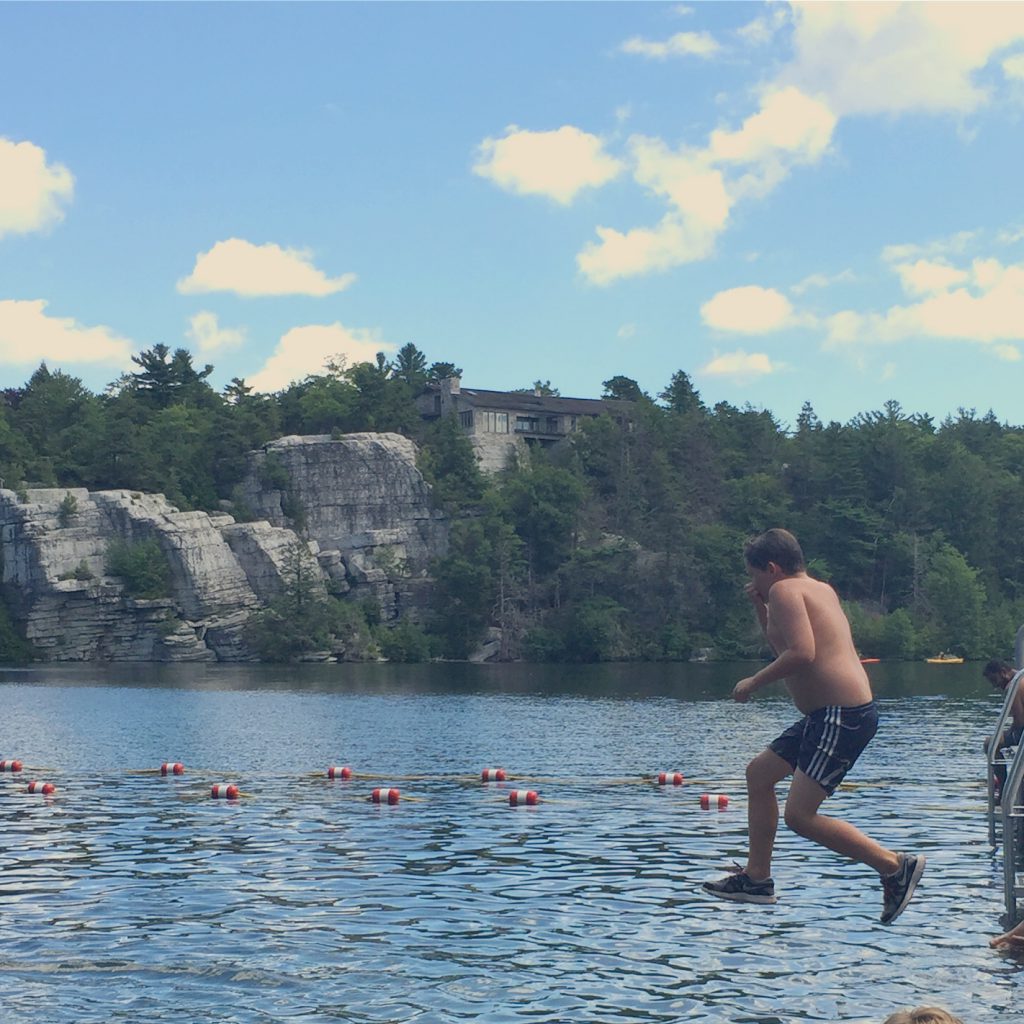 the girls were happy to play in the shallow section. the water was cool but not as cold as i would have thought for a mountain lake, so everyone was happy. 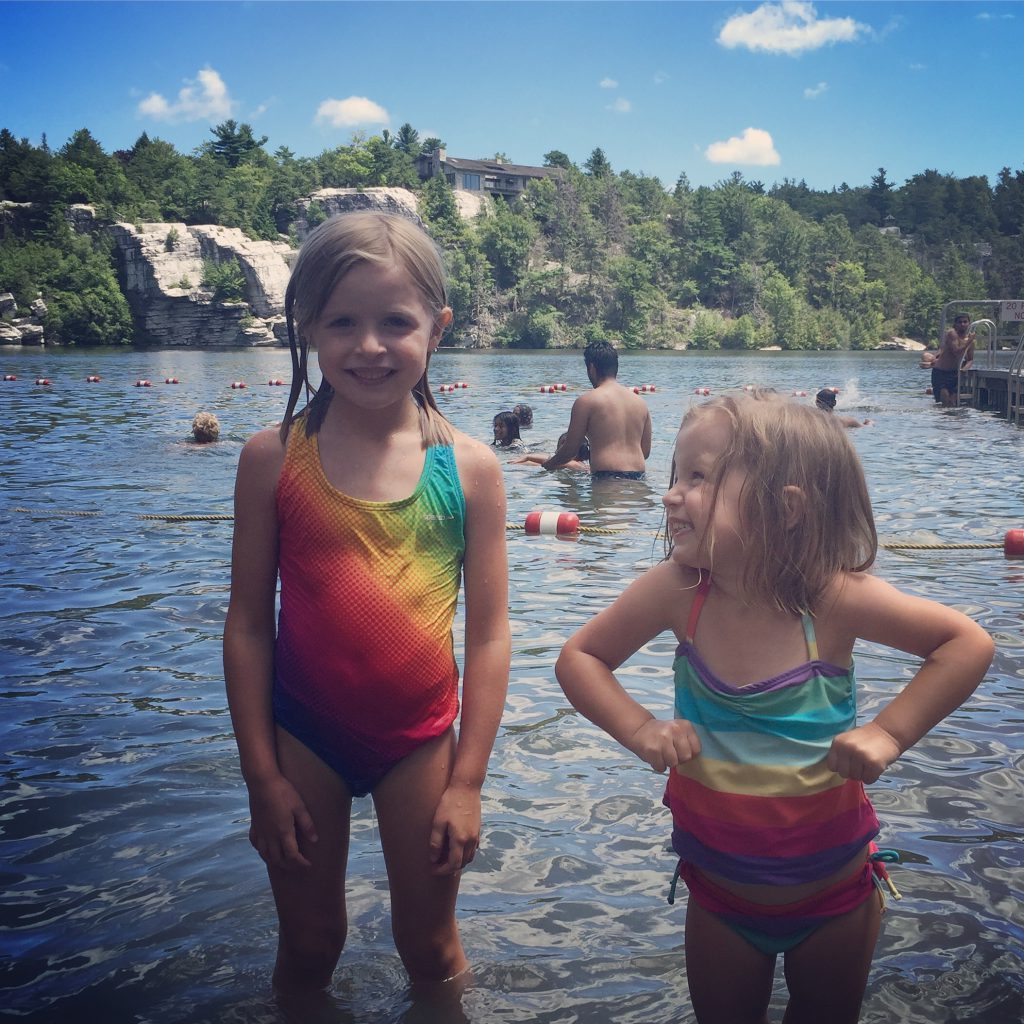 on the walk out, we explored a few overlooks, and found this great view.

back in the parking lot, we saw this fantastically restored old vw bus. it had some cute artwork on the back and i’m definitely in love with the color. 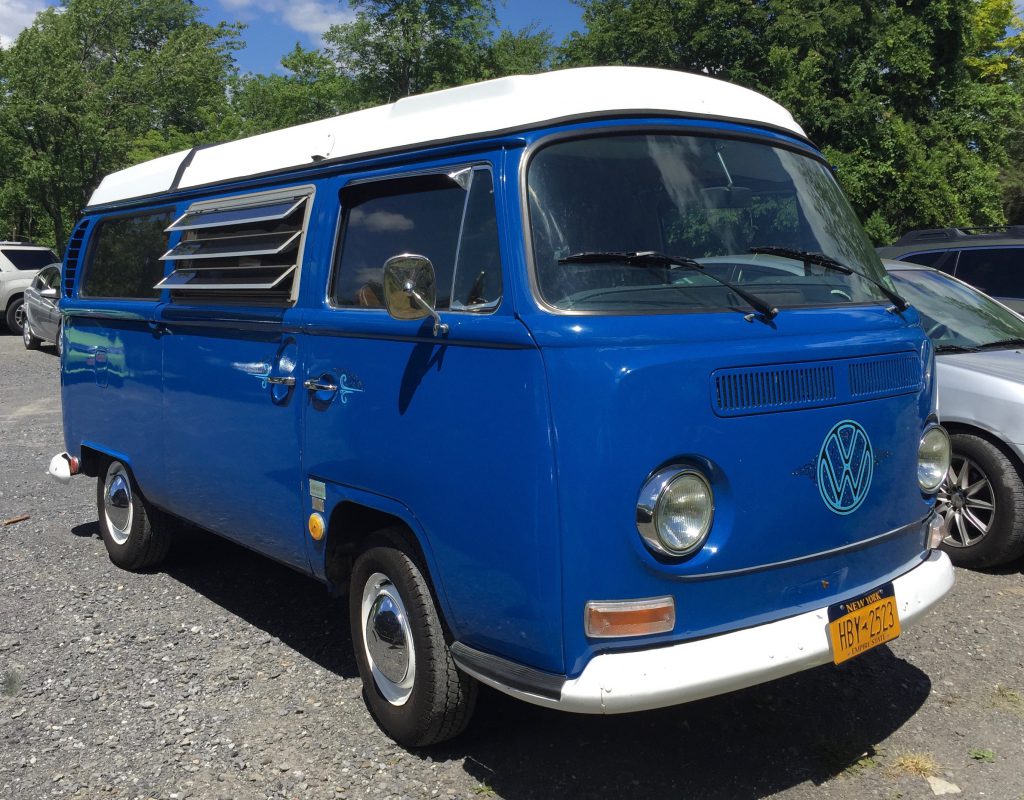 on our first night in the area, we ate at the kerhonkson diner. then, we drove past it a million times over the next few weeks. finally, we decided one last visit was in order, before we split town. 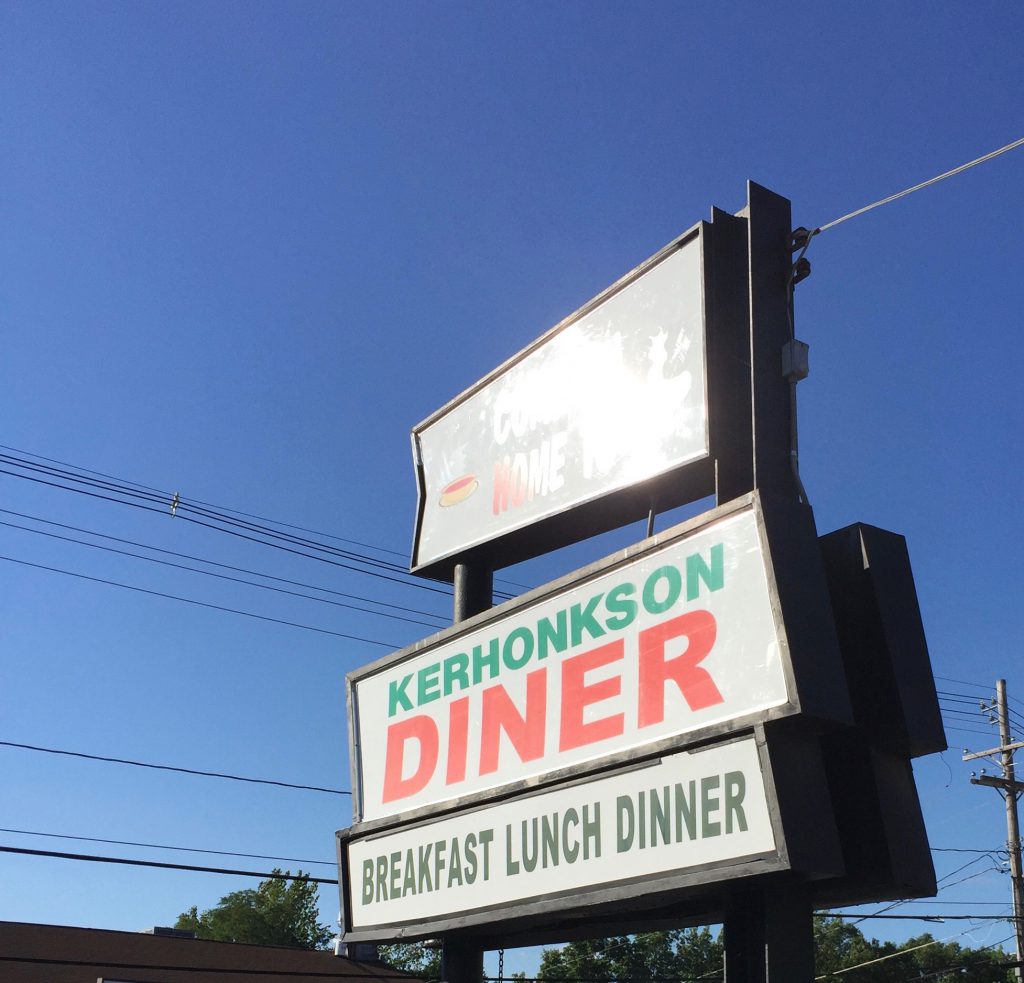 anna stuck to her guns and ordered the spaghetti and meatballs again. disaster. 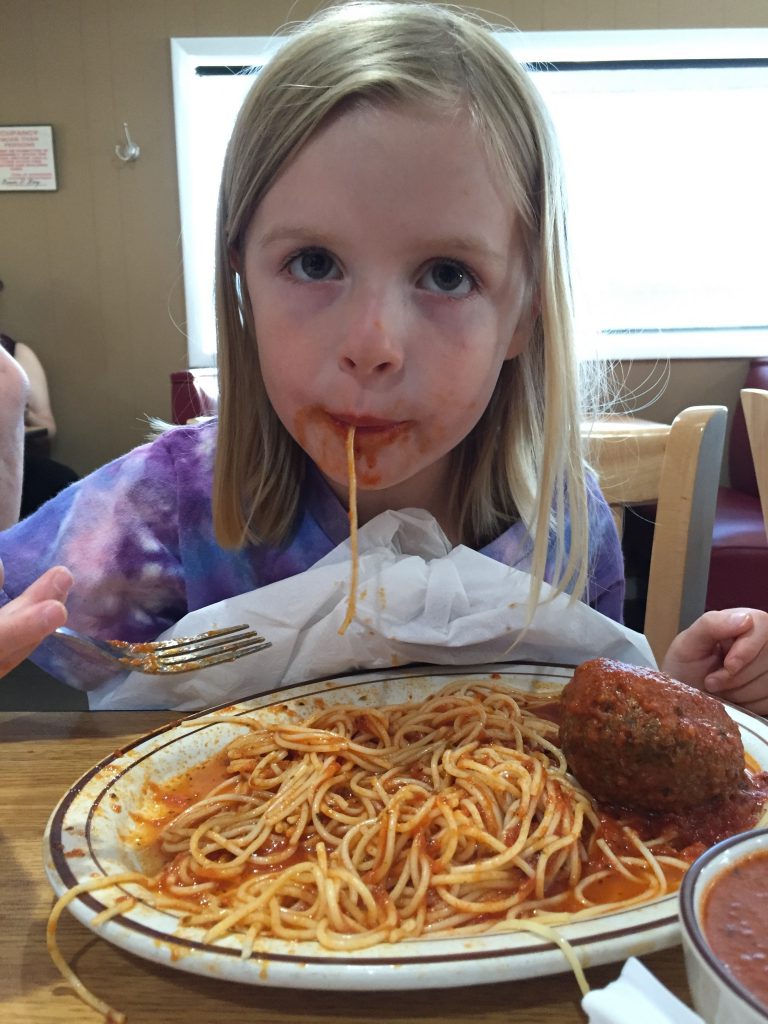 during a “grocery” trip to walmart, and despite our limited storage space, derek bought this thomas the train “playground” for hazel. she was in love. and it has provided HOURS of entertainment. not just for hazel but the other two kiddos, too. 🙂 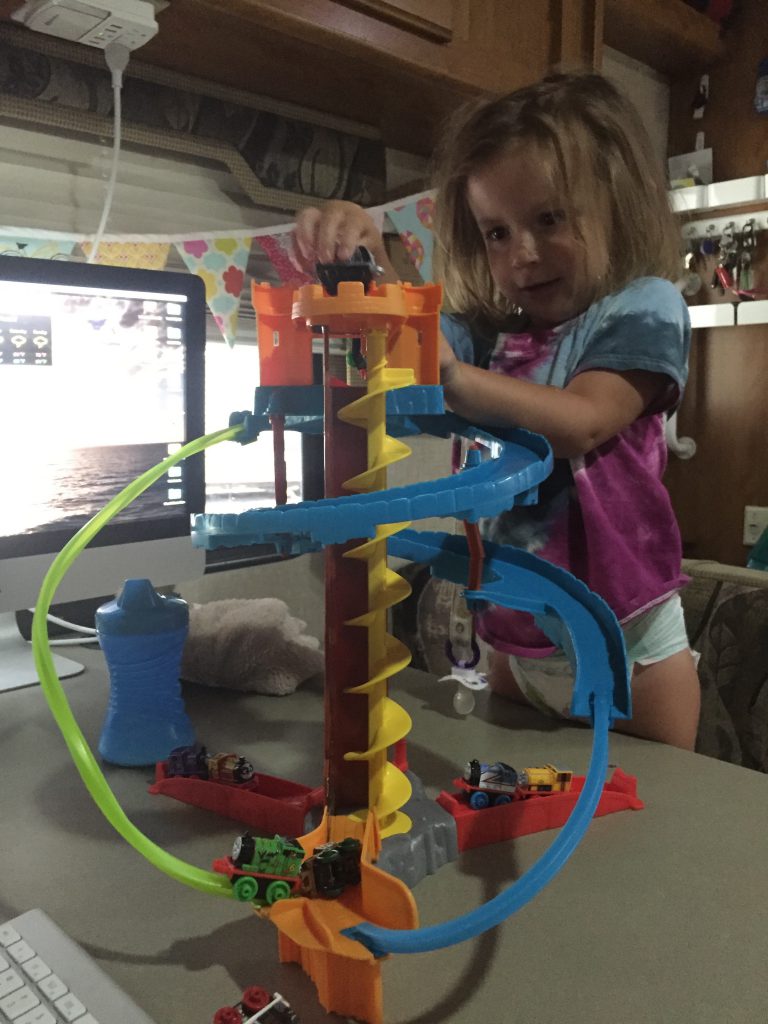 on our final day in the area, i loaded up the kids to head to poughkeepsie. we picked up some pizza and went to a park along the hudson river. (this was all by accident, when our first restaurant option fell through and we stopped at the first place i could find after that. then the childrens museum parking lot was full, so we had to park down the street at the park. can’t complain.) 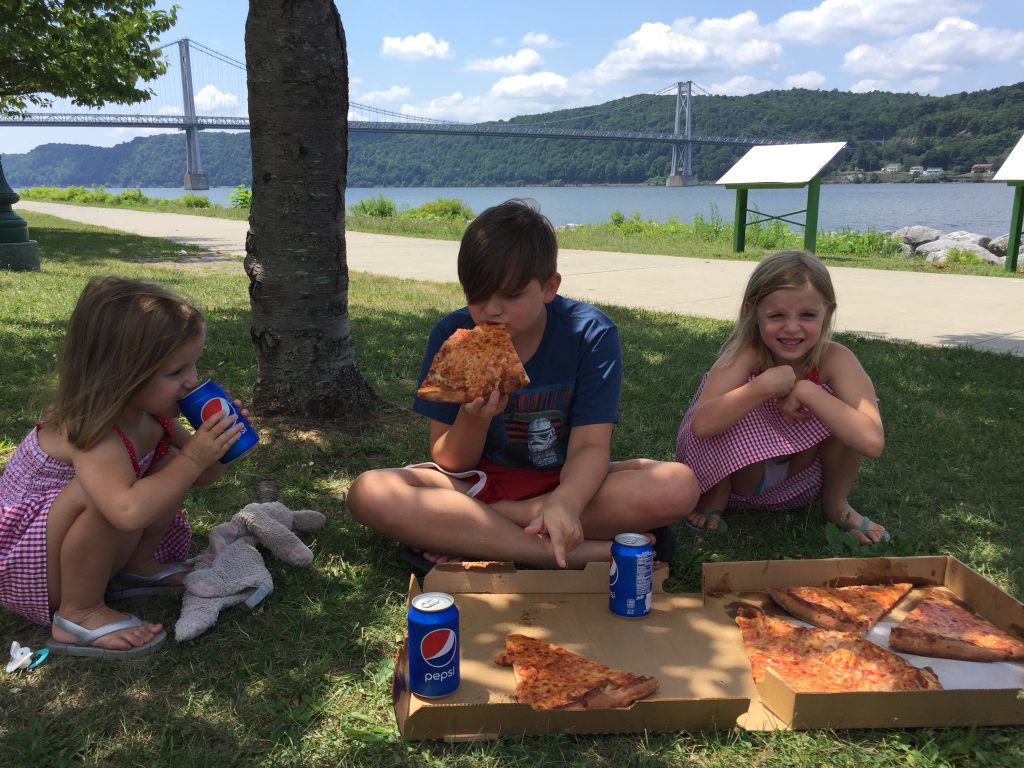 i had a hard time getting everyone to participate in photo opportunities. 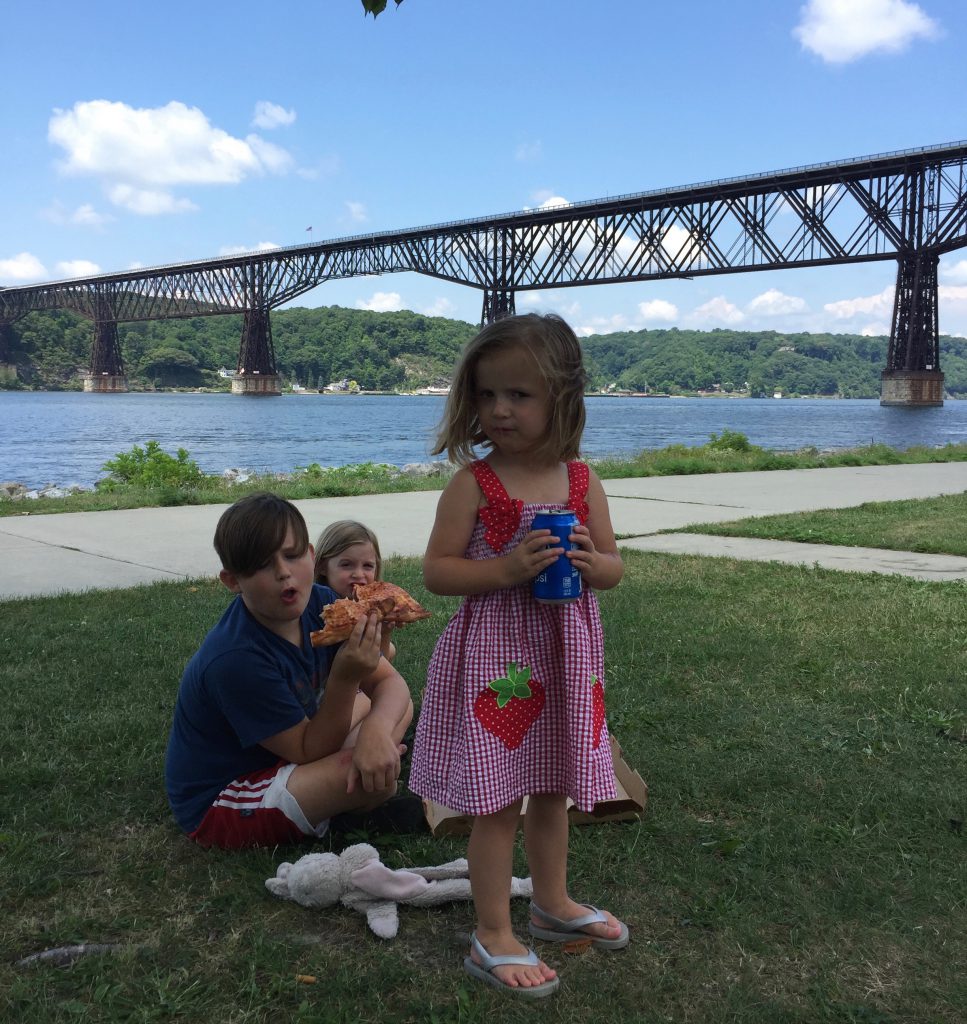 except anna, of course. (this is the same bridge we had walked across last week). 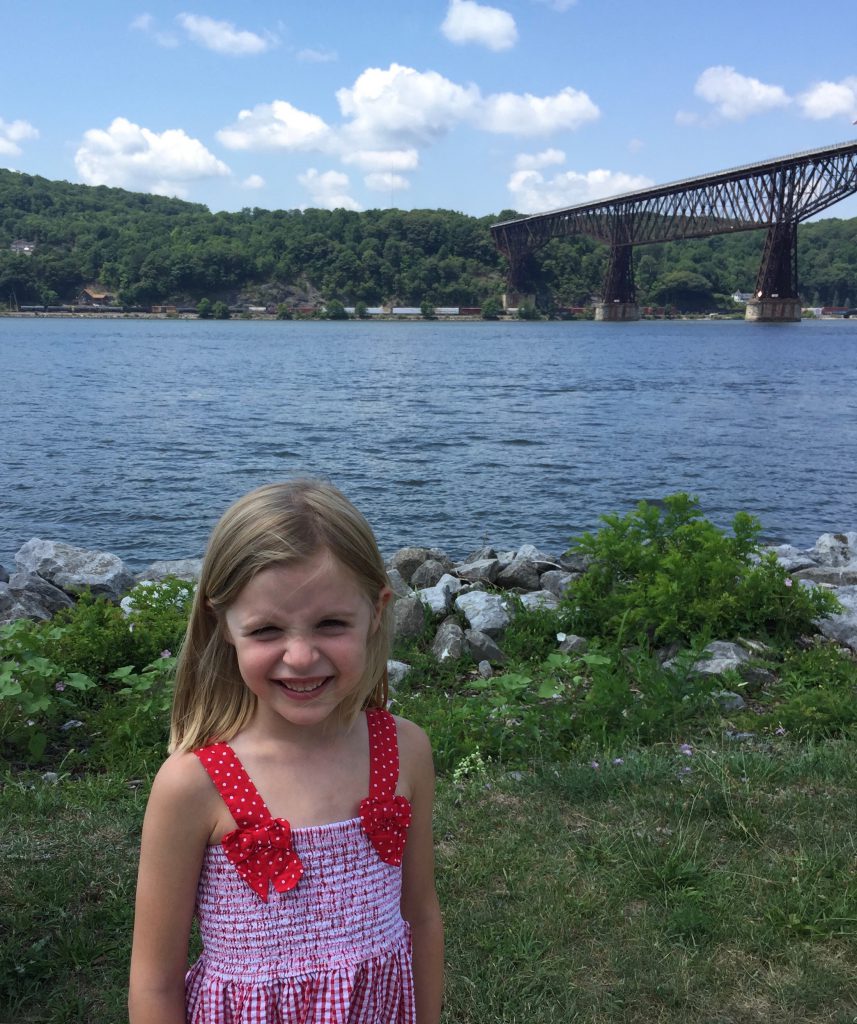 inside the childrens museum, hazel settled in at the train table. 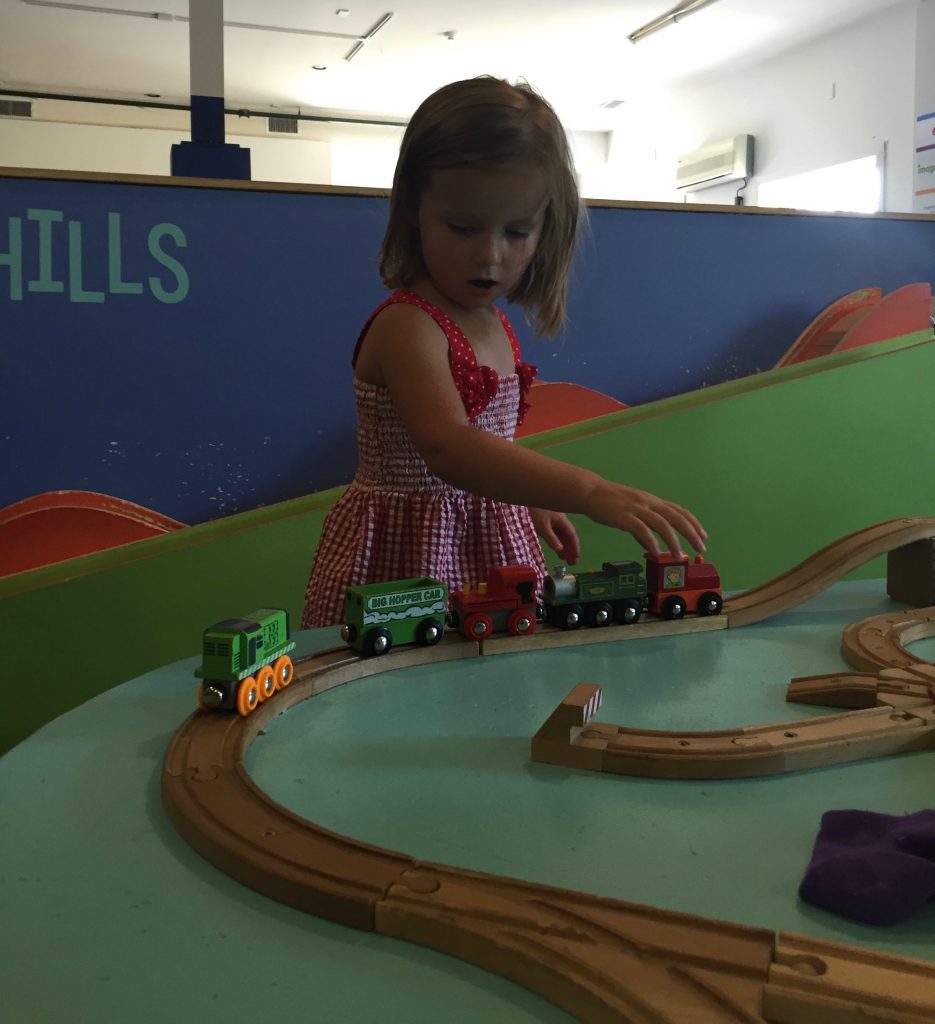 the other two disappeared into a play structure type thing, but popped out every now and then to play with (harrass) hazel. 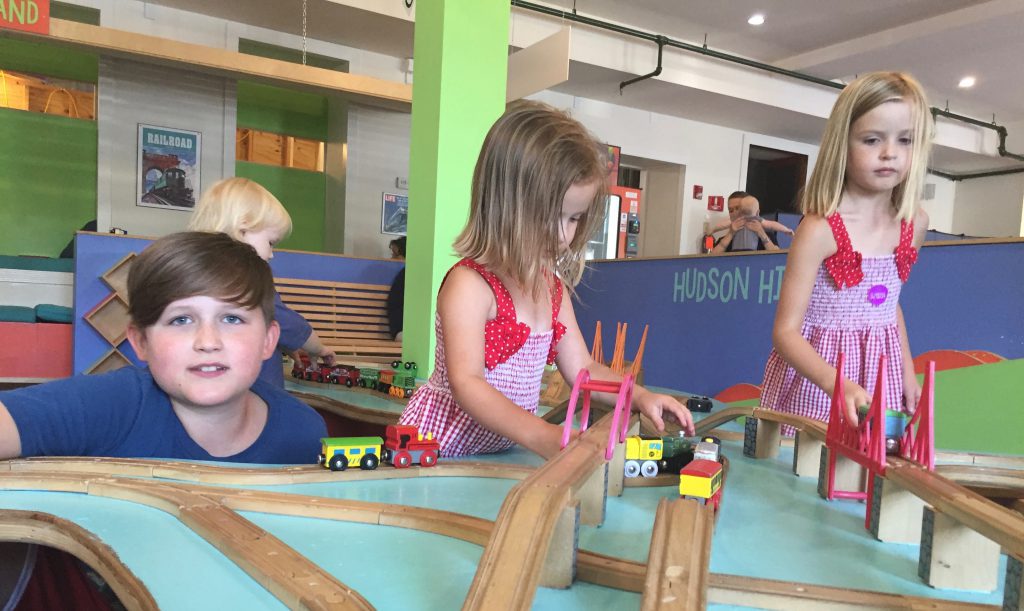 after another kid walked by with a firefighter jacket on, hazel informed me that she wanted to go to the firetruck and wear a fire coat. so, that’s what we did. 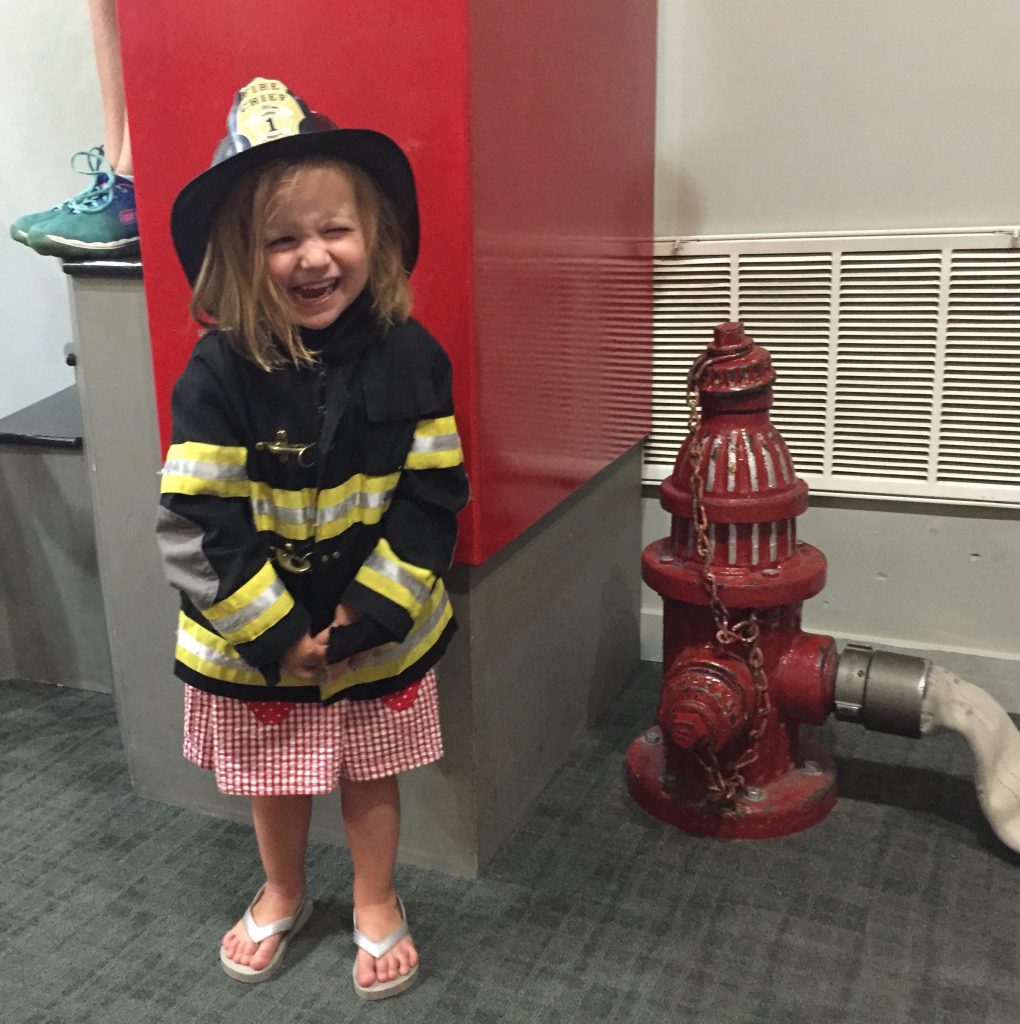 and these two actually played nicely for a few minutes at the “takeout restaurant” exhibit. 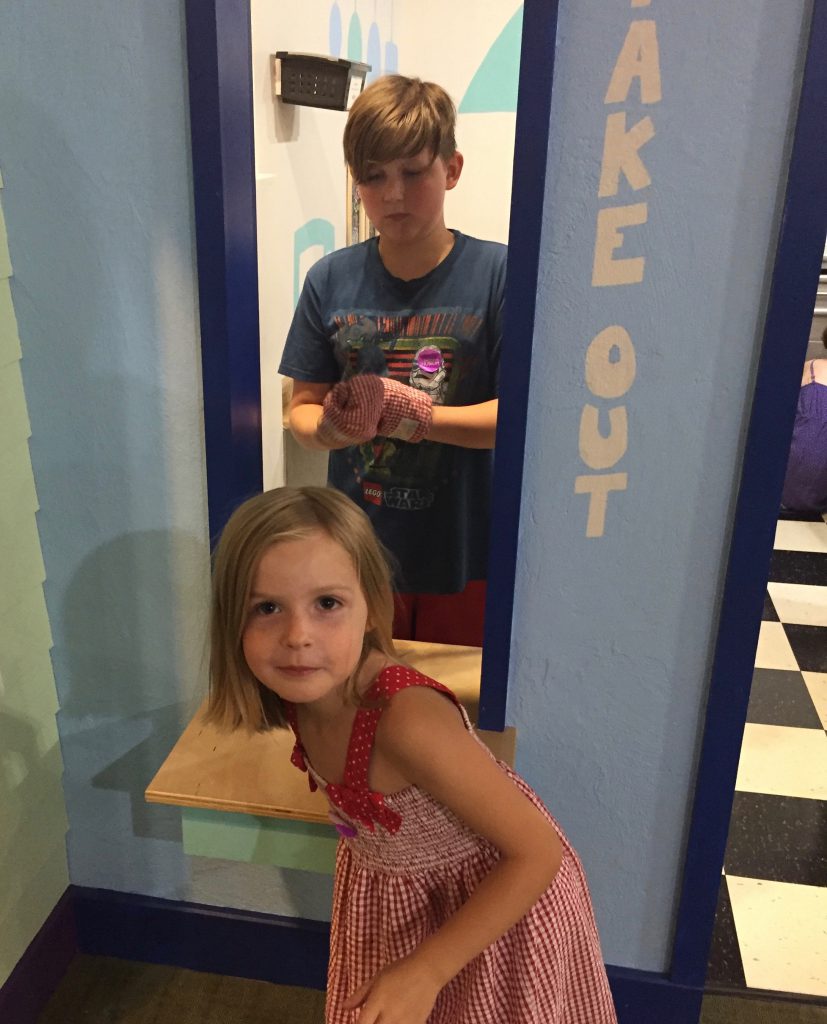 back at the firefighter area, the three lid kids loaded up to take a pic. 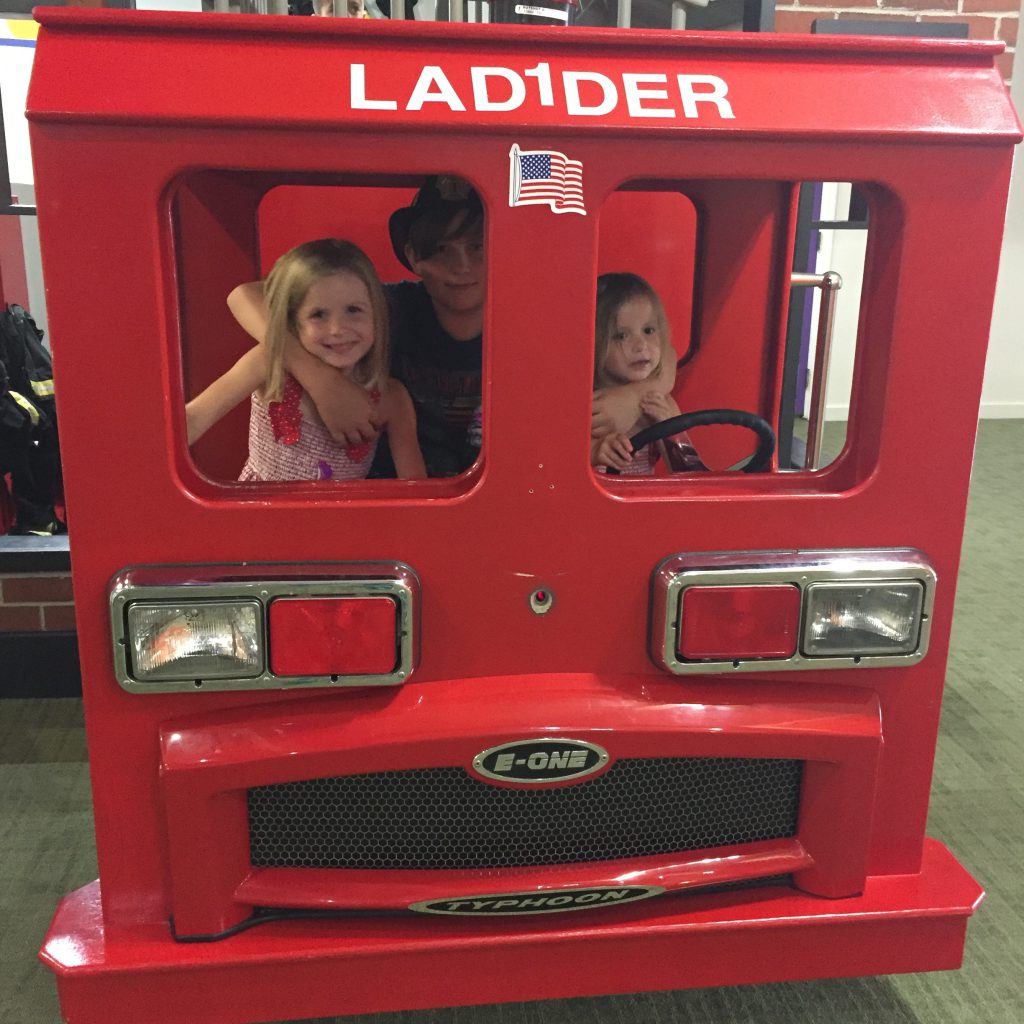 on the way out, the kids were more agreeable to a riverside photo. mostly.

obviously, we stopped for ice cream on the way home. 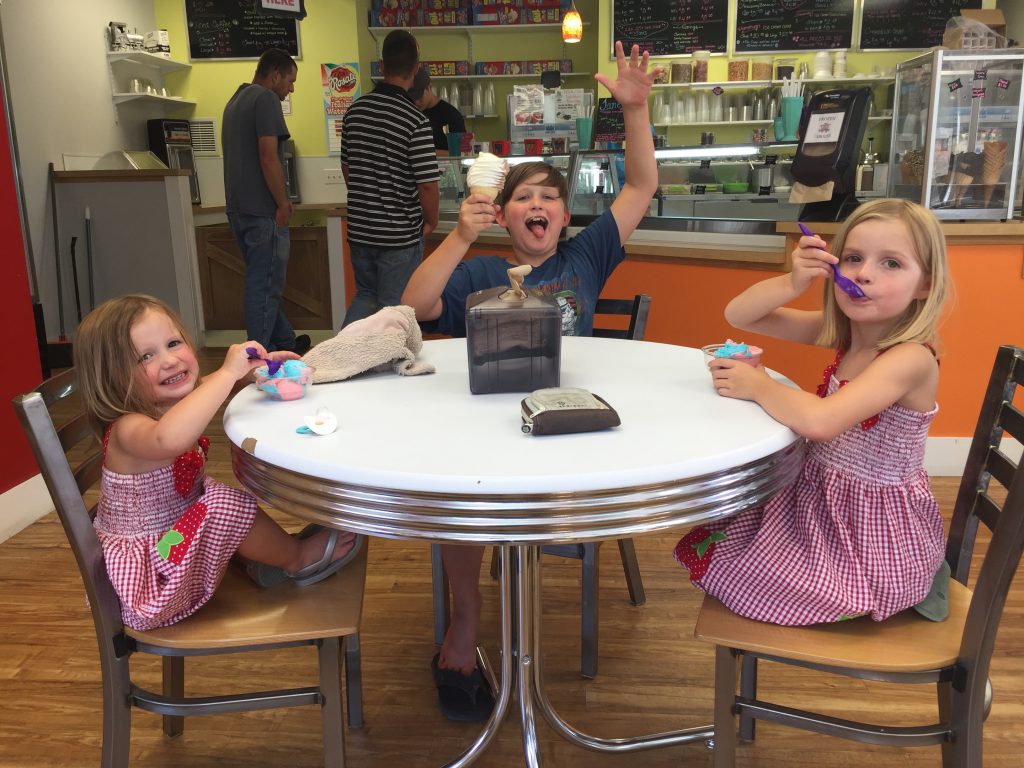 that night, we attempted to use up the rest of our firewood. i found a workaround to the giant marshmallow dilemma. i just pulled the roasted part away from the melty inside and used that for the s’more. 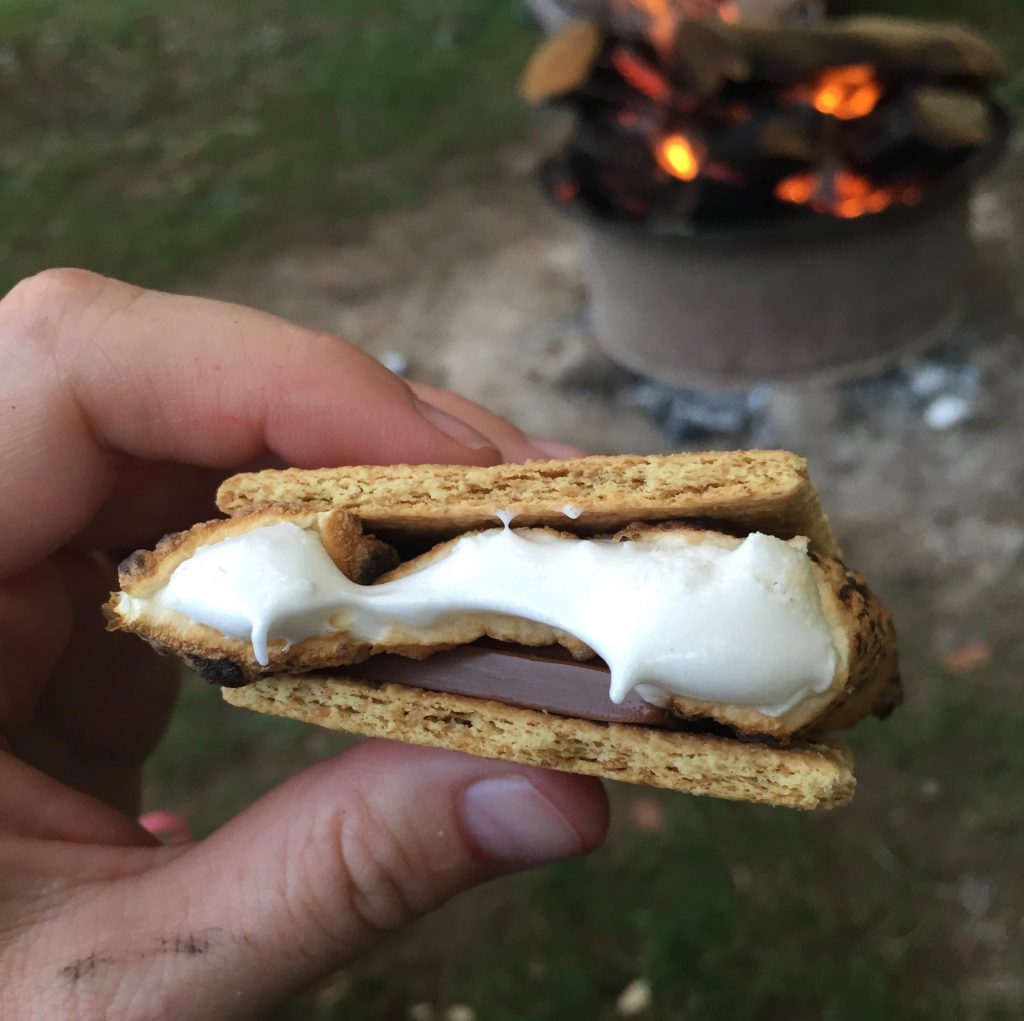 anna did not, and it made for a sticky mess. 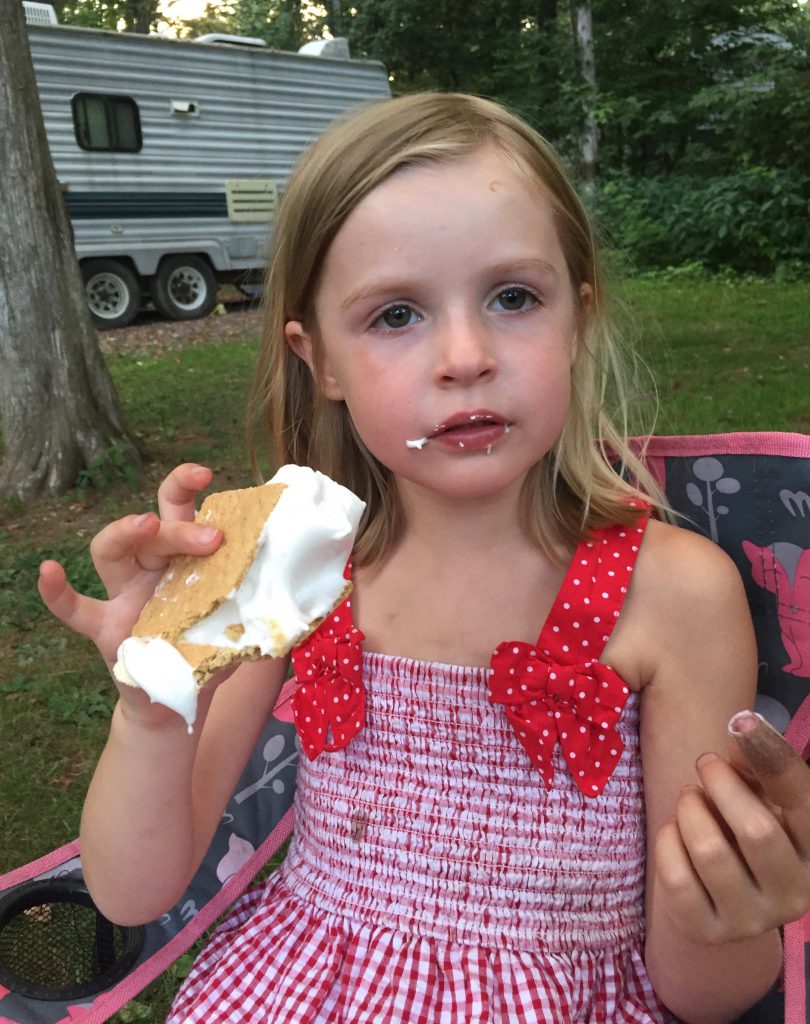 finally, we were ready to depart. we learned a valuable lesson in accord. three weeks is too long to stay in one place. well, especially in a place that doesn’t have much nearby. everywhere we went was a pretty good drive for us. also, the campground was mostly annual members, which meant there were a lot of locals who feel like they run the show. i wasn’t a big fan. anyhow. off we went…

the girls and i stopped in kingston for breakfast. they ordered the “olympic” to split between them. hazel mostly handles the carbs and anna, the proteins. 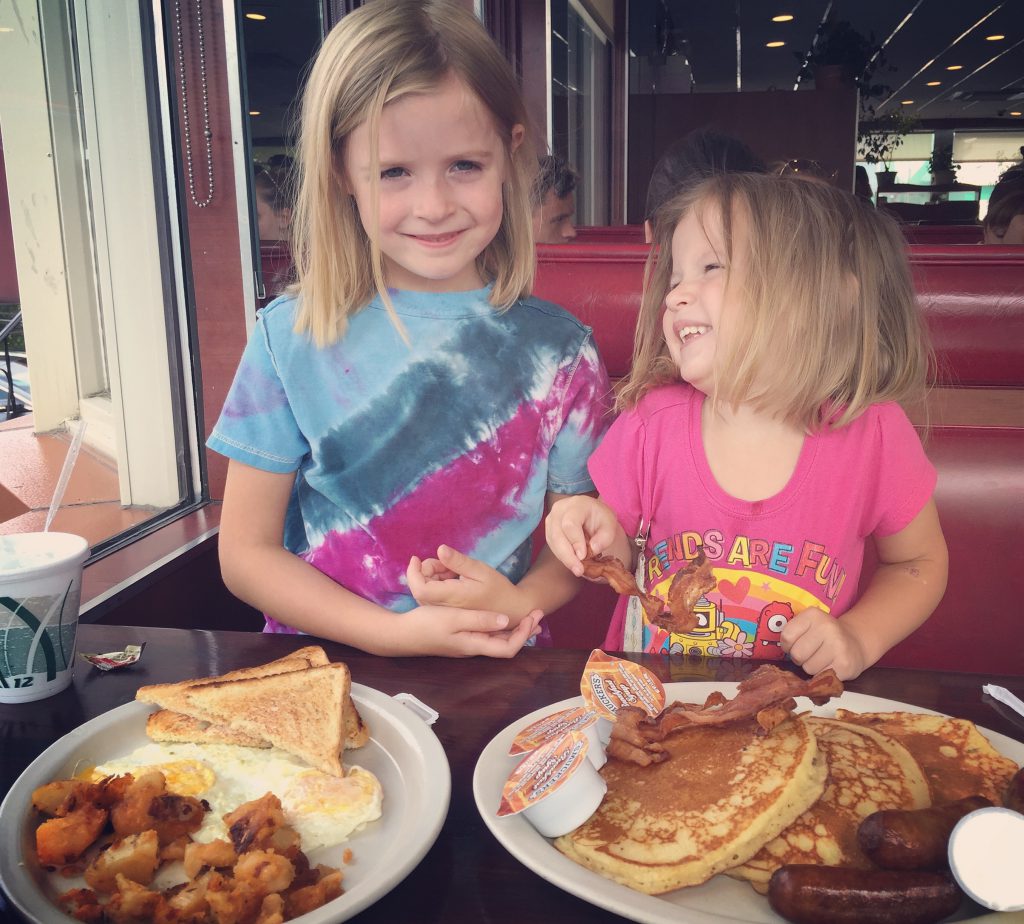 we arrived at our next location, sturbridge, mass, in the afternoon. then it got crazy. we tried for over an hour to get level at our first site, before finally giving up. the office folks kindly sent us off to a different site, in the back, in a row of tightly packed giant motorhomes. we couldn’t even put out our awning. the next day, we scouted the sites being abandoned by weekenders and laid claim to a great (level) spot, next to the office, lake and beach. so we moved again. 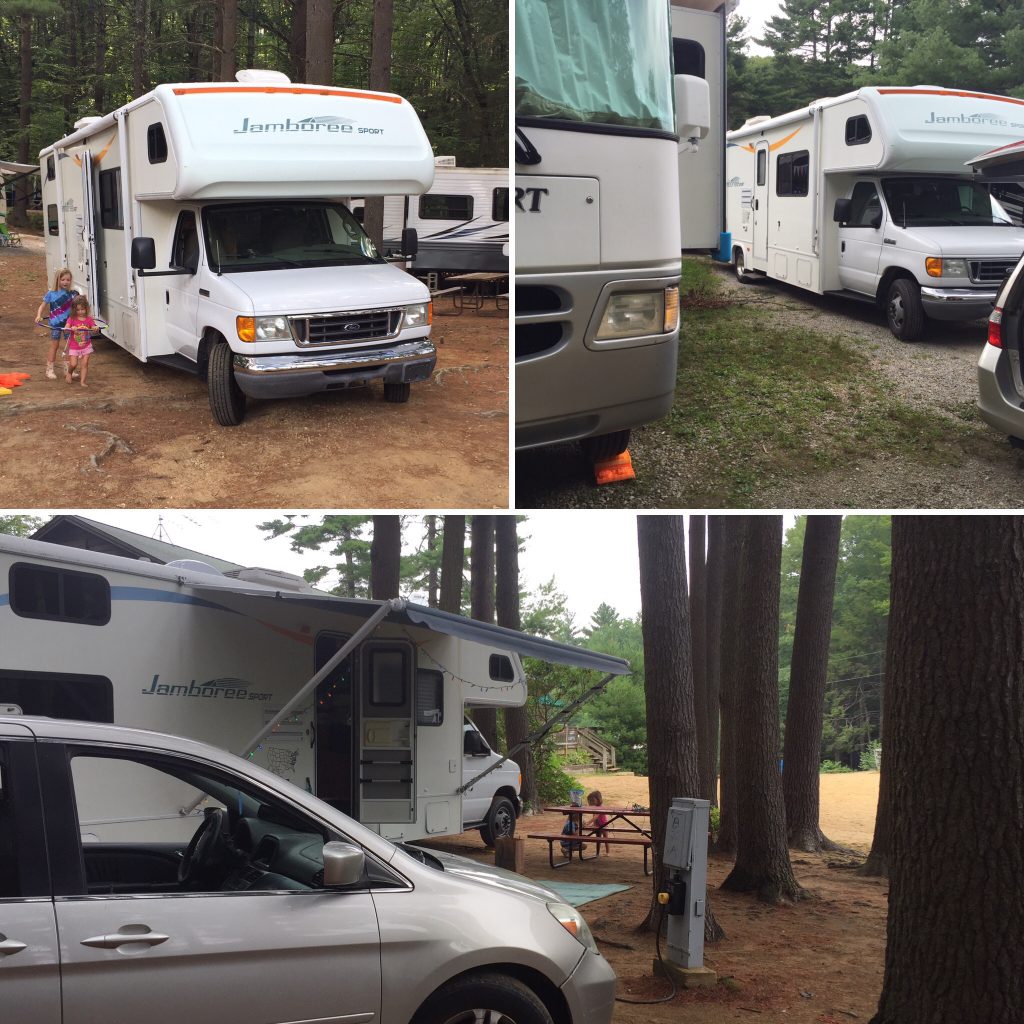 we are all settled in and ready for our massachusetts and new england adventures to begin. 🙂