for our spontaneous one day stay in albuquerque, i was faced with a pressing decision. free science museum OR petroglyph national monument. since we had already seen a bunch of petroglyphs at three rivers and had just visited a national monument the day before, i figured the kids wouldn’t be super excited about petroglyph that soon. so, the science museum it was. and i the decision was a good one. explora science center was one of our favorites.

we started off in the water room. the lidkids love messing with water currents. then a giant school group rolled in, so we made a quick escape for a less occupied area. 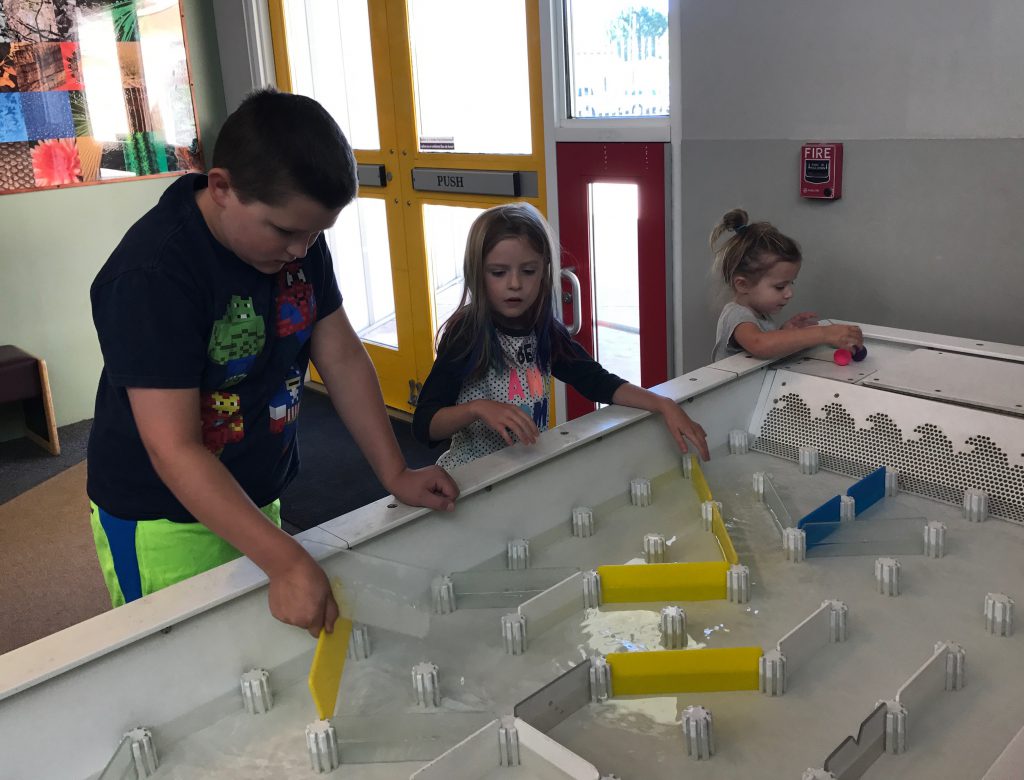 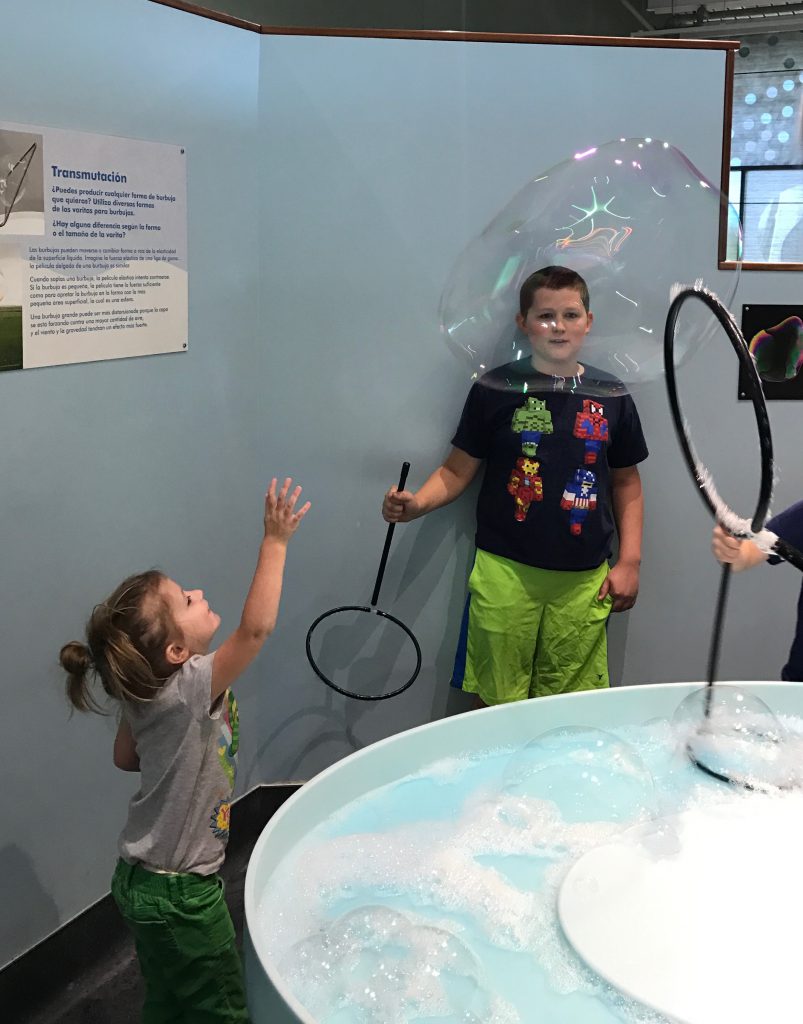 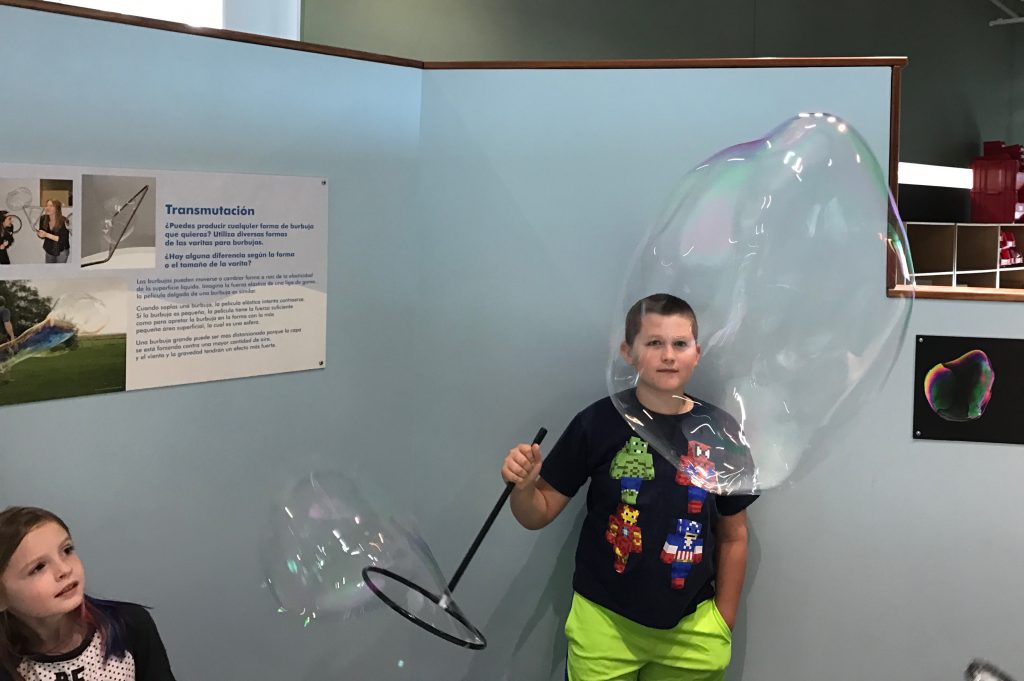 then hazel happened upon the bath-type bubble area and she was hooked. 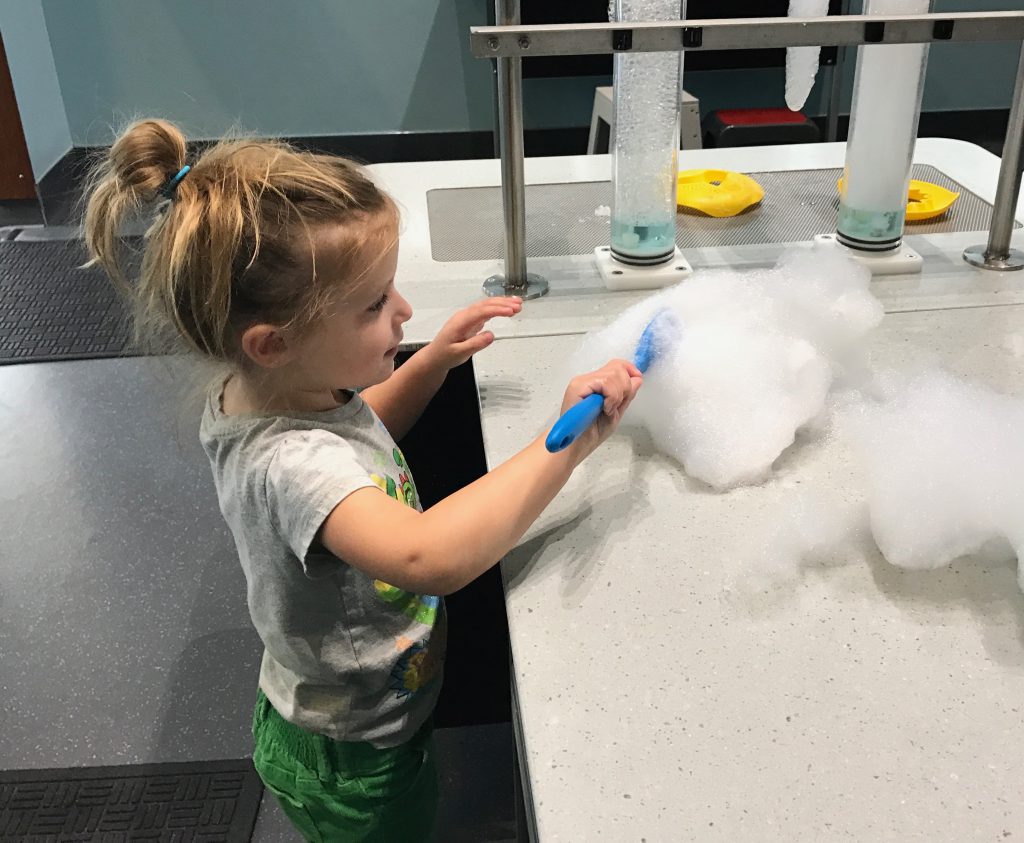 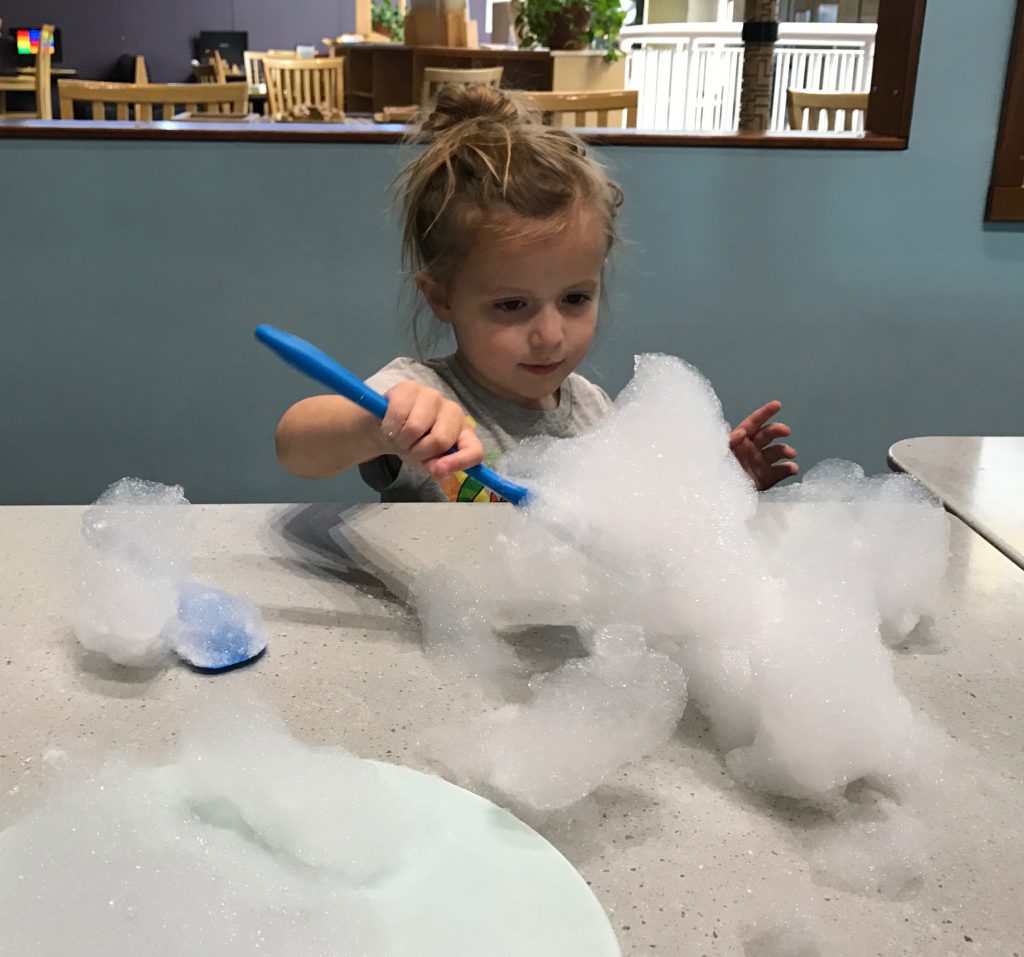 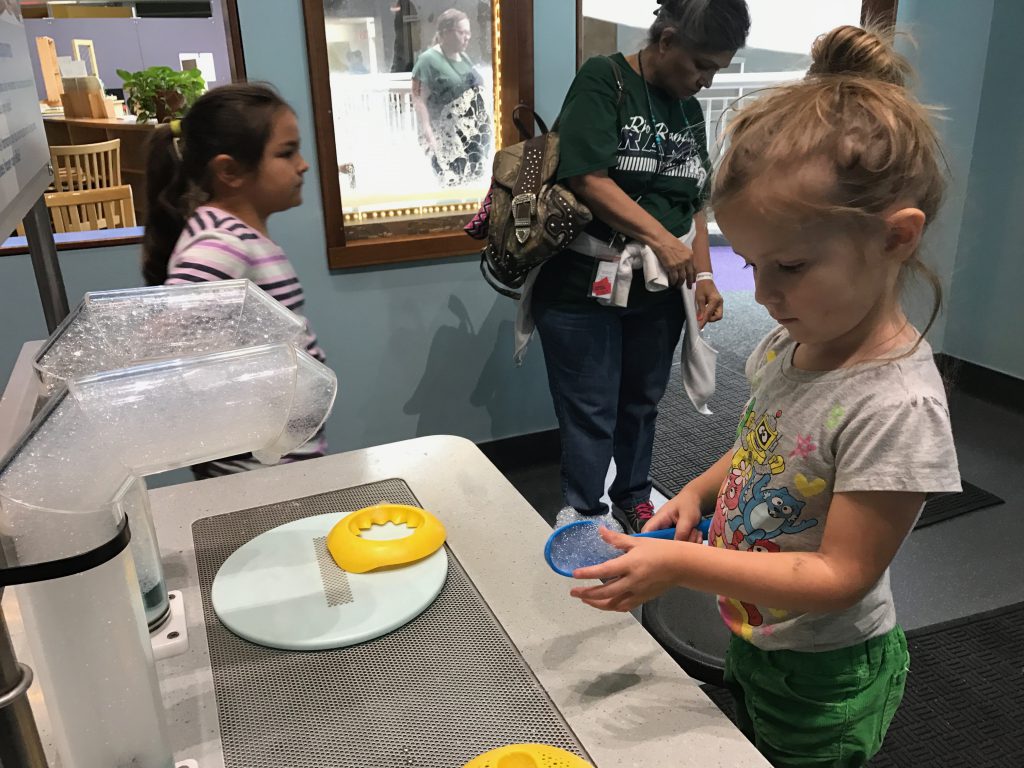 anna tested out all of the exhibits. she can’t be limited to one sort of bubble making. 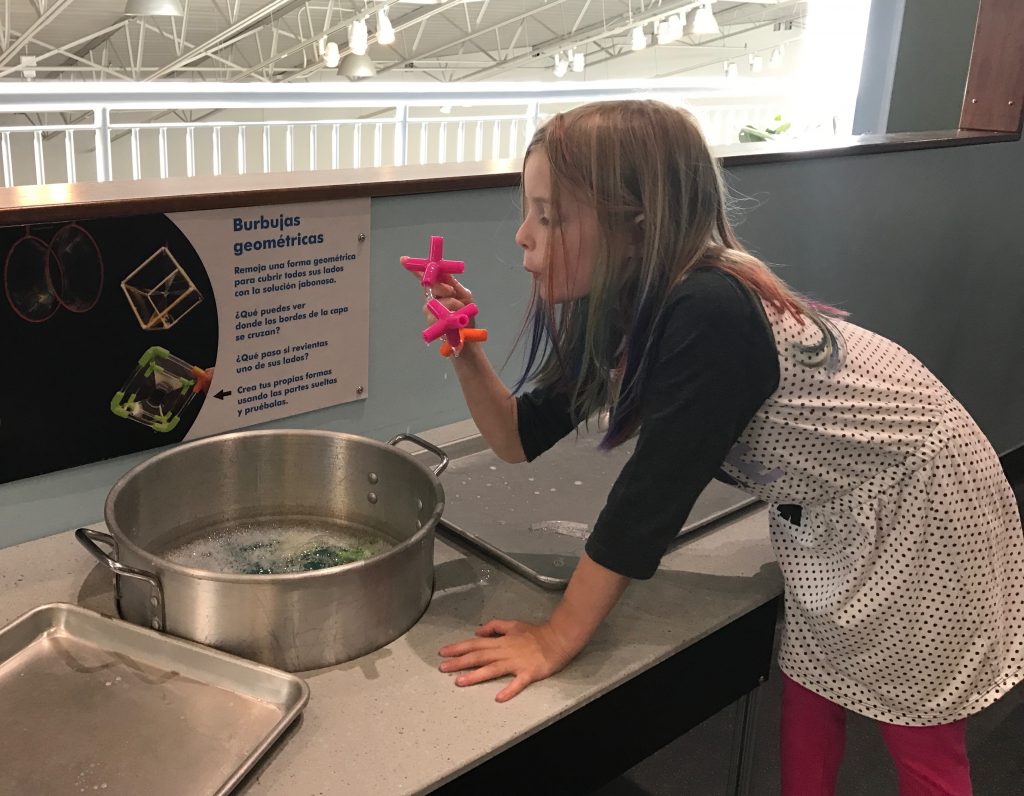 then. another giant school group rolled in. and it was complete chaos. so, we left for a bit, to try some block games and puzzles and wait for them to clear out. when we went back in, the giant bubble making area was foam. the foamy area was depleted. and we decided to find a new spot. 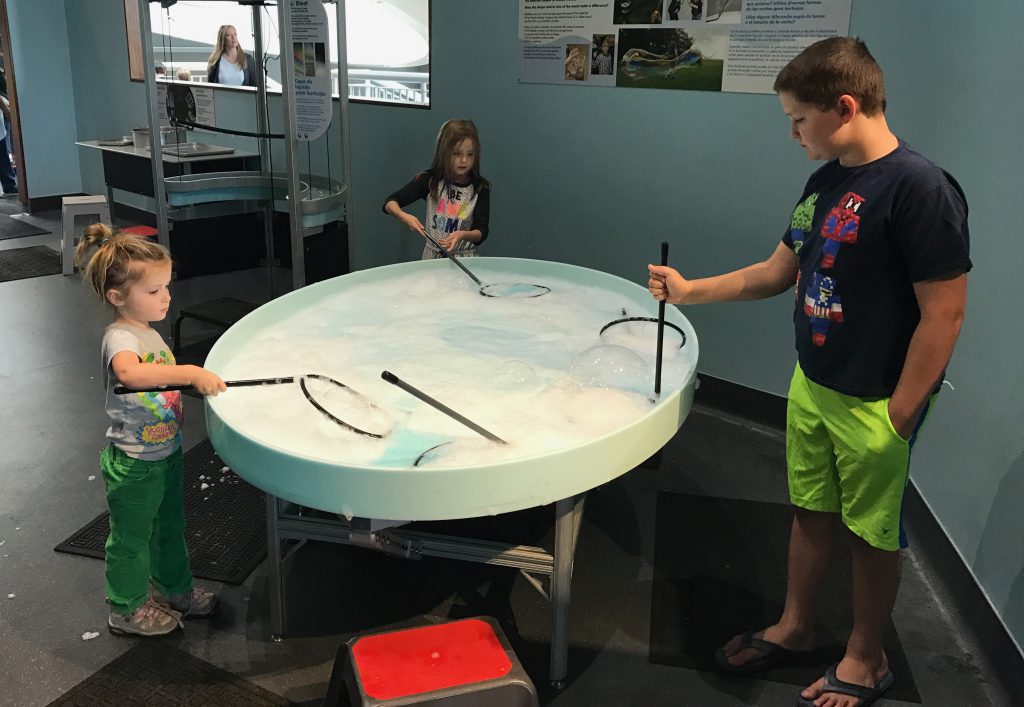 there was a really cool sound wave/vibration area, but for some reason i didn’t take any pictures. i think it was because it was sort of maze-y and my kids were running in all different directions. isaac made a song on a giant music box like apparatus, with movable pegs to strike the little xylophone keys (called a comb, i have learned through derek’s internet research). hazel banged on drums. we made patterns in salt with different frequency vibrations. and strummed violin strings. and then we went onto the deck…

the kids loved it. there was all sorts of giant building materials and a really long conveyor belt. the view of the sandia peak in the back was pretty sweet too. 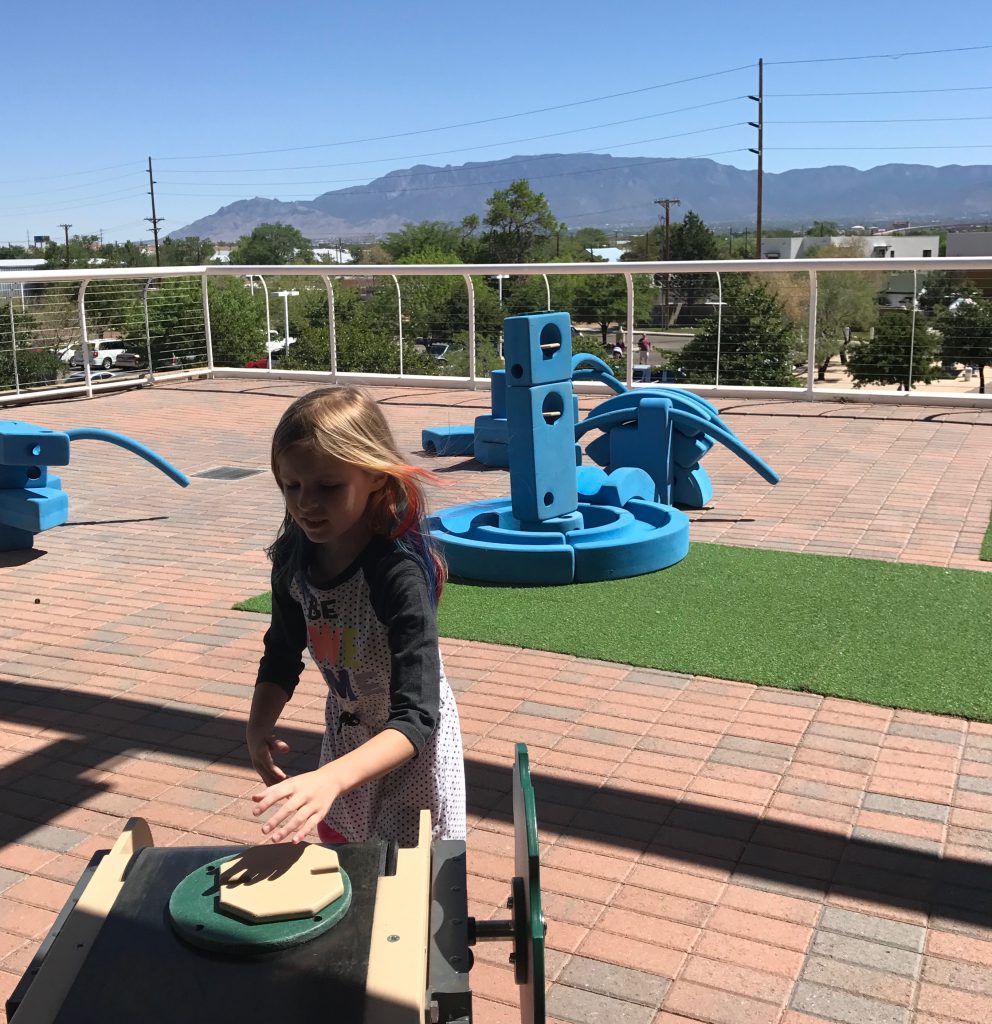 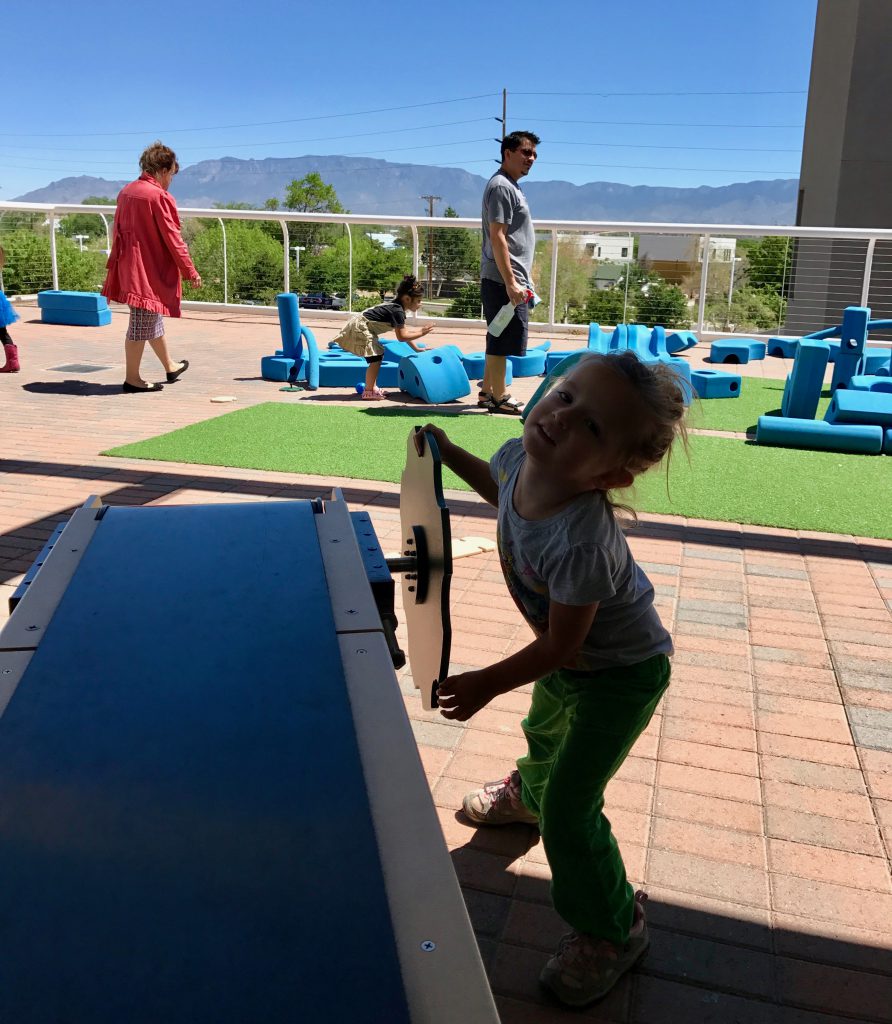 anna and a few other kids worked really hard on a house, made from giant notched plastic planks. isaac and hazel worked on a cool foam structure. and then. a raucous school group rolled in, trailed by a handful of indifferent parent chaperones. the place was ripped to shreds within seconds. some kids ransacked the foam structure, using the longer pieces as swords as the ran around hitting things (and strangers). other kids hopped onto the conveyor belt. and some brought the houses that anna and friends had been working on to ruins. anna and hazel handled the destruction well. but isaac, i looked at him and i was sure i saw steam coming out of his ears. he stomped over, almost in tears, demanding to leave. i try really hard to remind him that we came for free and this is a special day for those kids and we can come back any day and this is their only chance and remember how you behaved when you were in public school on a field trip and it doesn’t matter because what you build will be taken down sooner or later and so on. but, it’s no consolation. and i don’t blame him. field trip groups are the bane of our little home/road/unschool existence.

so, back inside, we found a sparsely populated room and took up residence. the windy room. bernoulli balls. 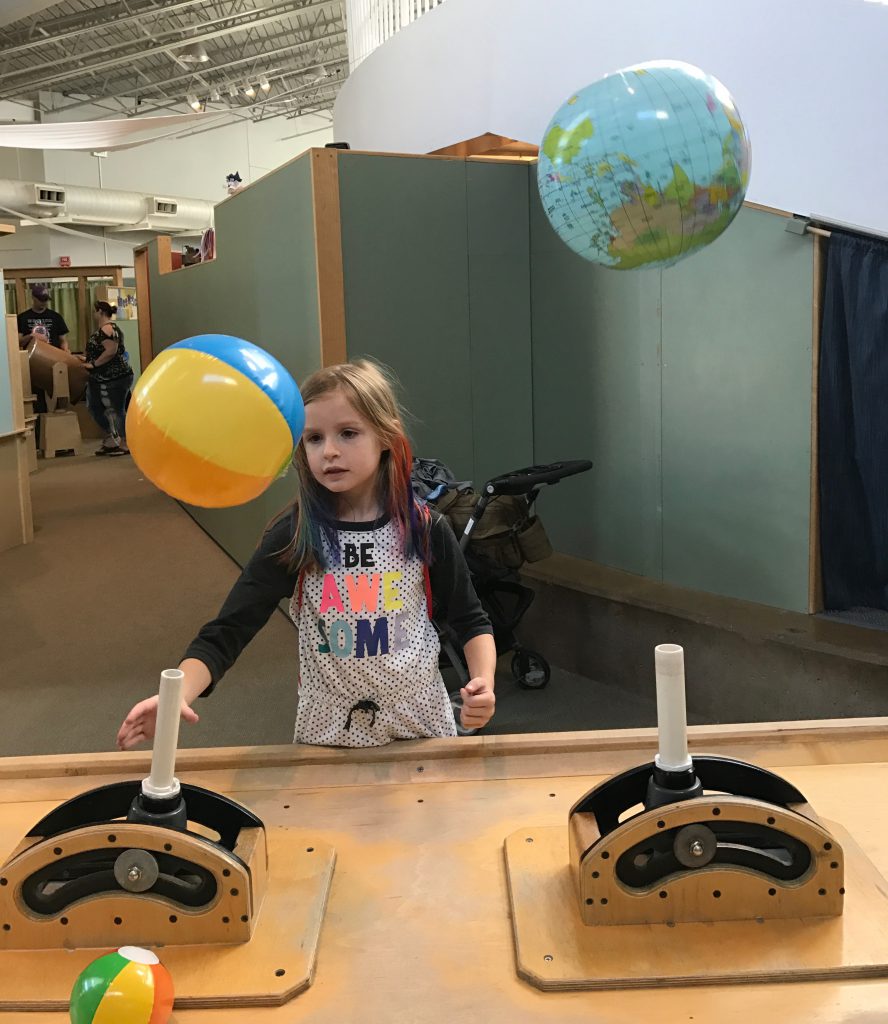 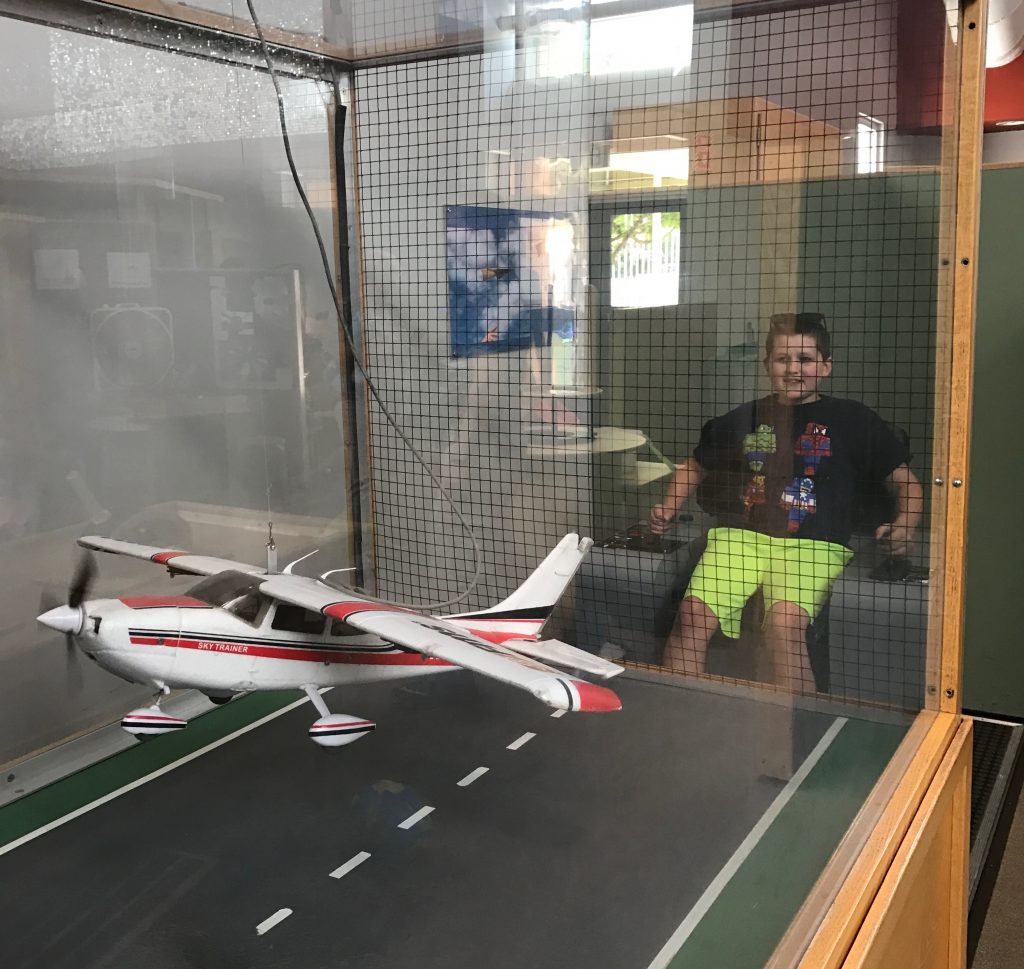 a brief break in a little cave under the stairs with cool lighting. 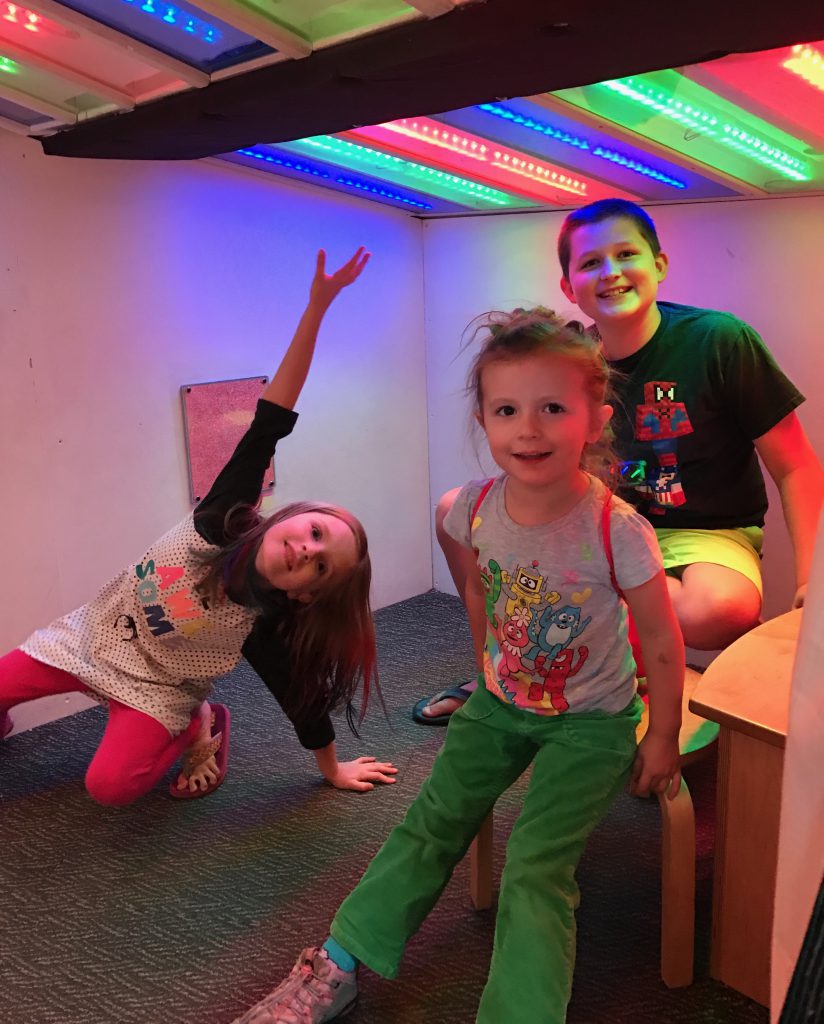 while isaac worked intently on a wind powered car with another boy that he befriended, anna moved over to make a filmstrip for the zoetrope (another derek research find). it’s the little wheel that spins, with slits in it, and it makes the picture look like it’s moving. except anna drew random pictures, so it mostly induced seizures. 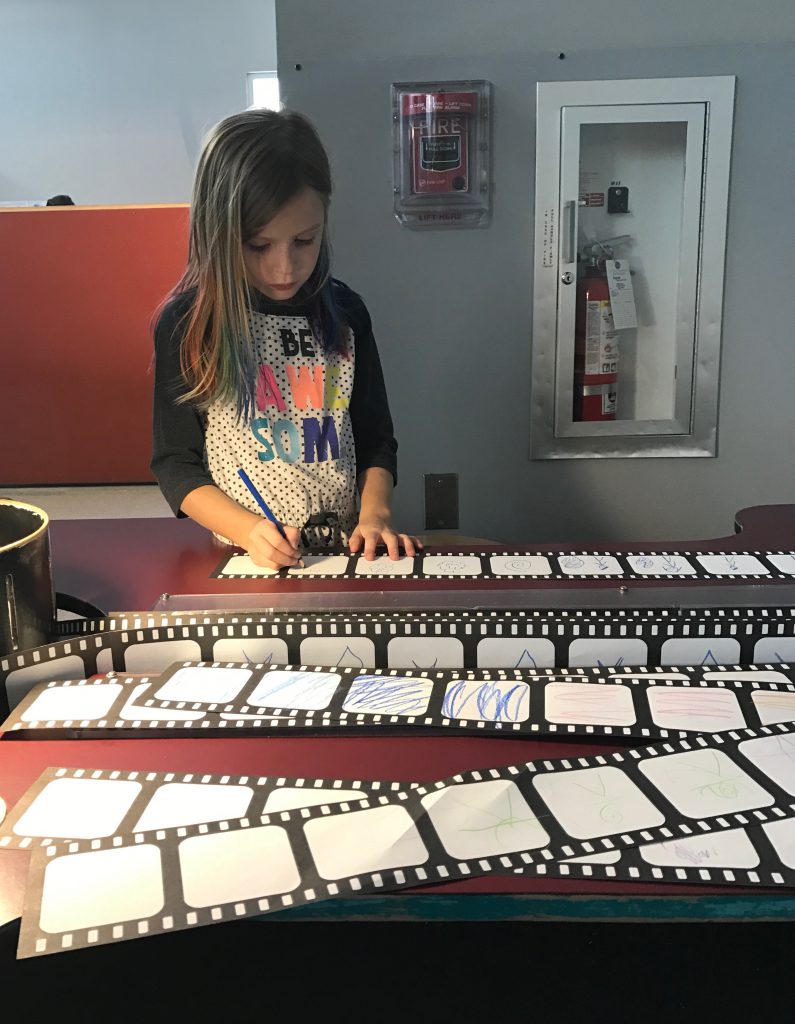 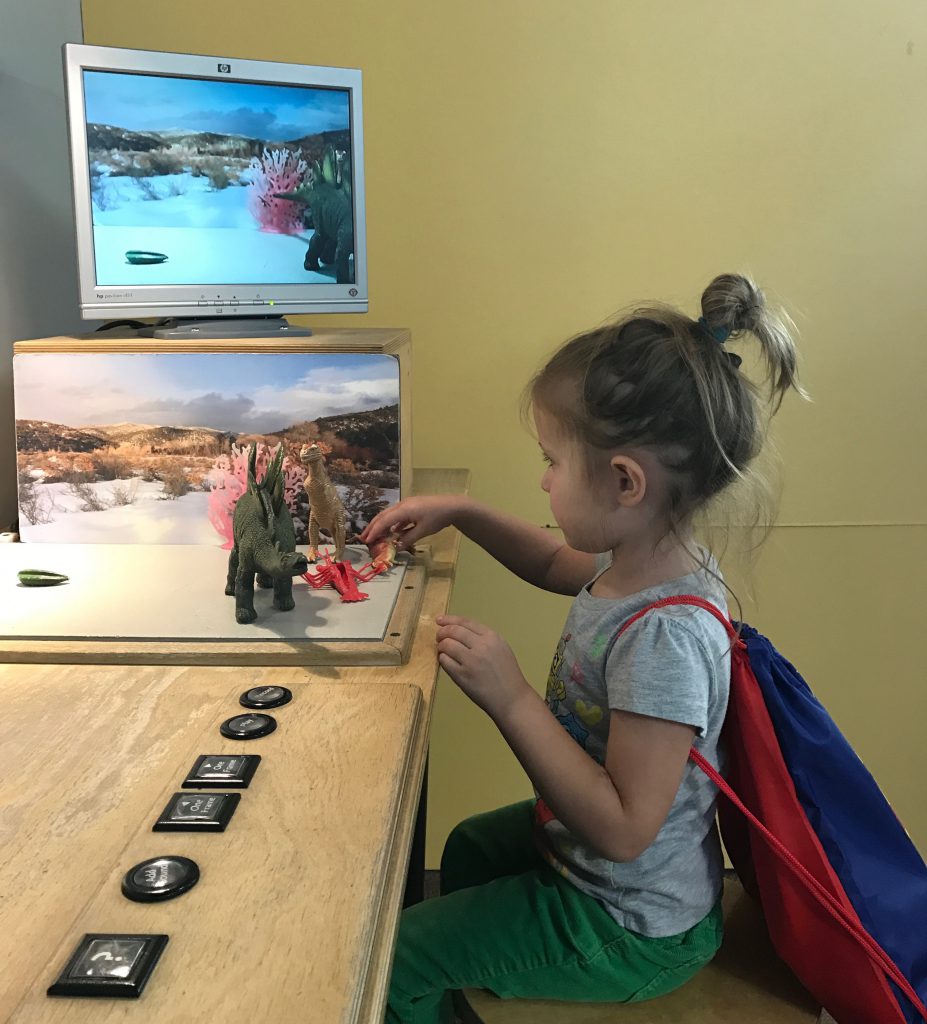 and then. hazel found her favorite spot. the really cool train “table”. which was more like a train cubicle, where the trains wrapped in and out of the wall. 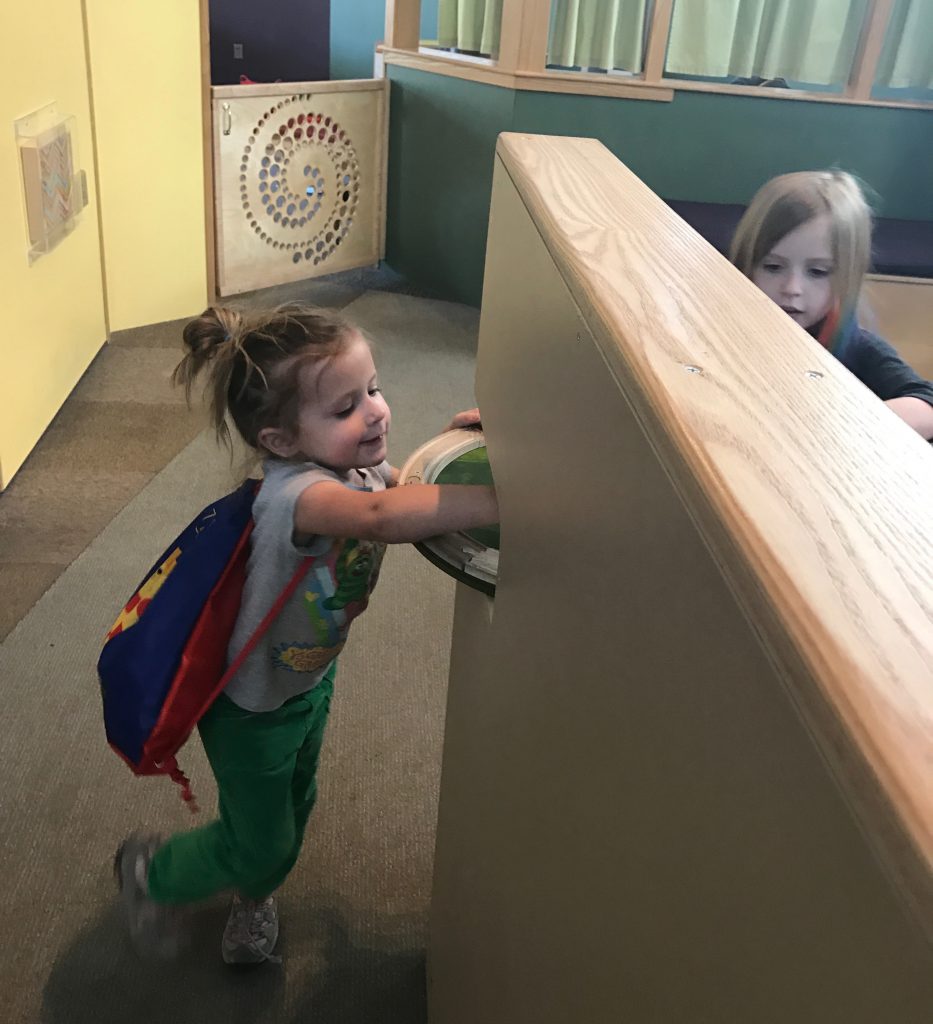 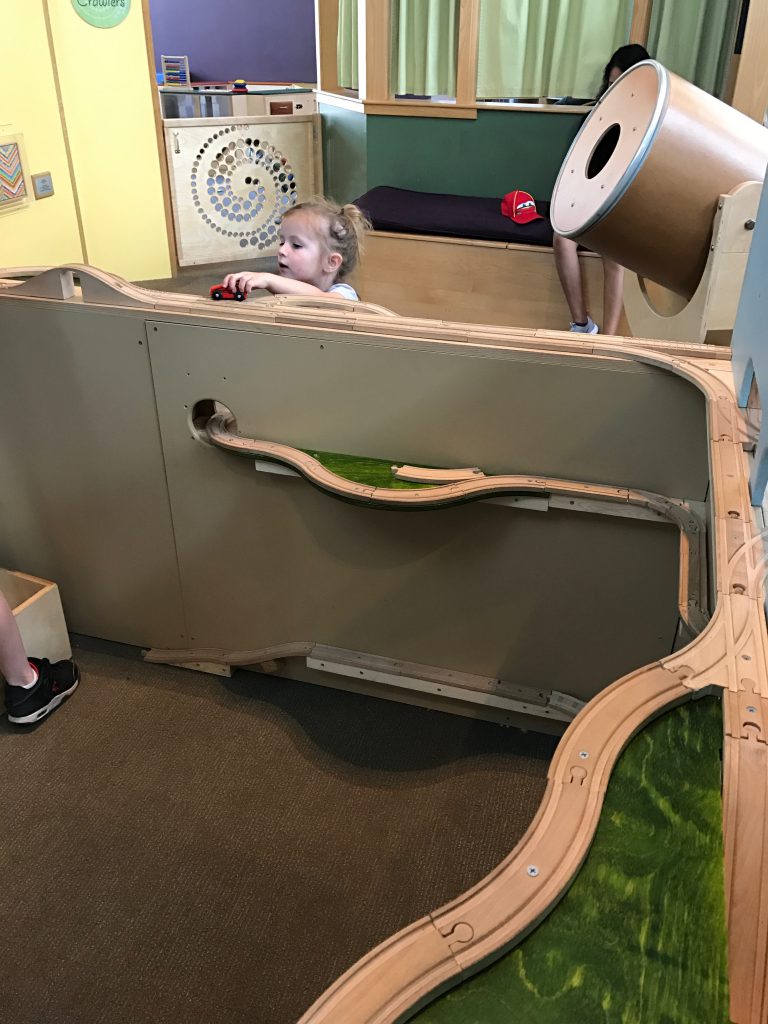 they were a little short on trains, so she was happy with just one, but we had to be careful of this little guy, because he was very intense and very quick to incorporate our little engine into his string of trains. 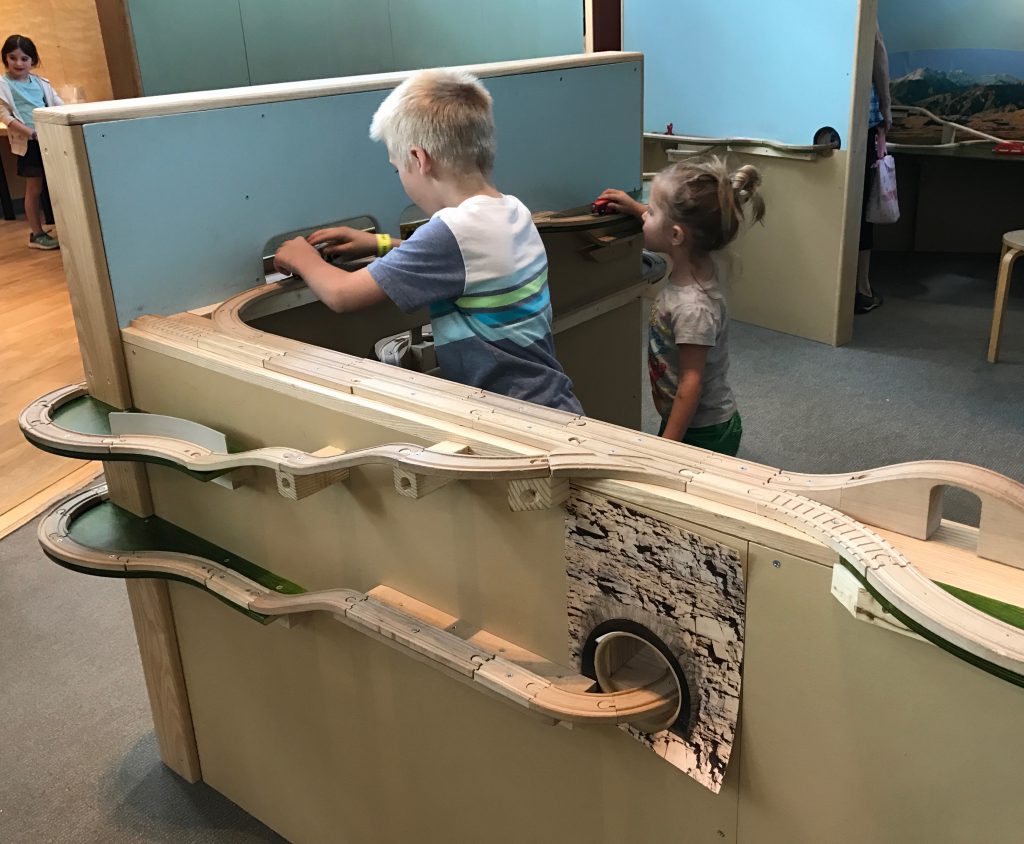 on the way out, we stopped for a few minutes at this big ball maze thing. always a lidkid fave. they could watch it for days and days. 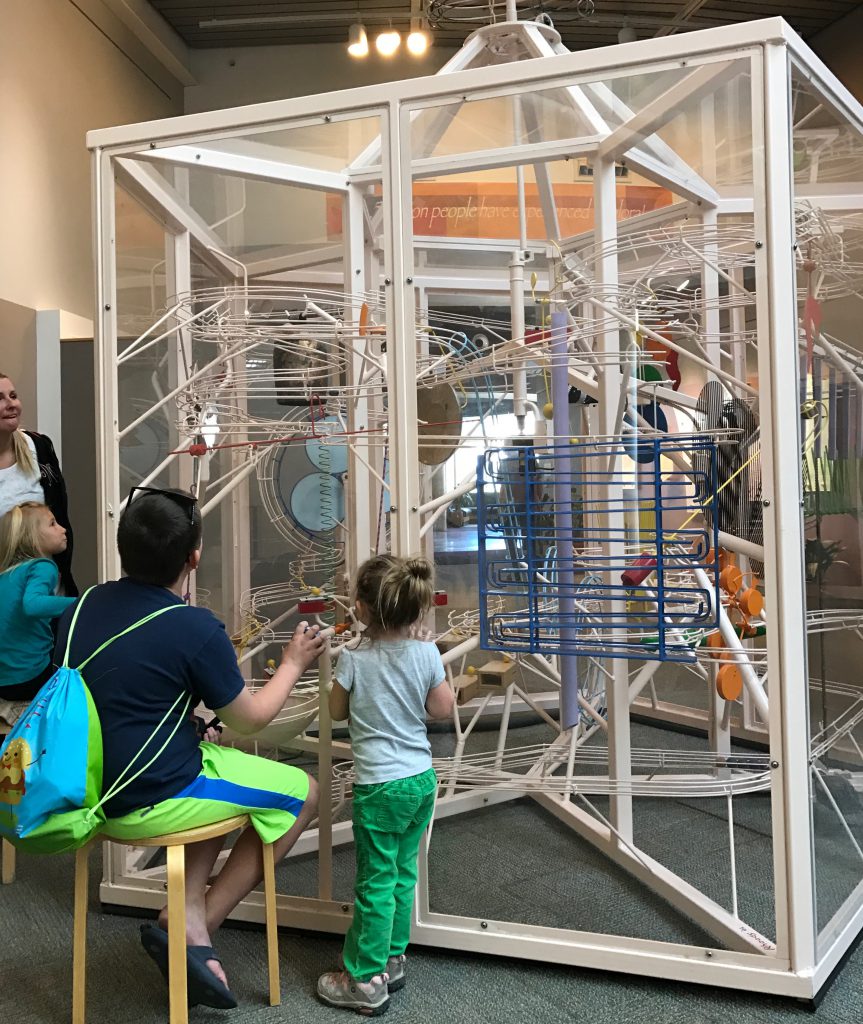 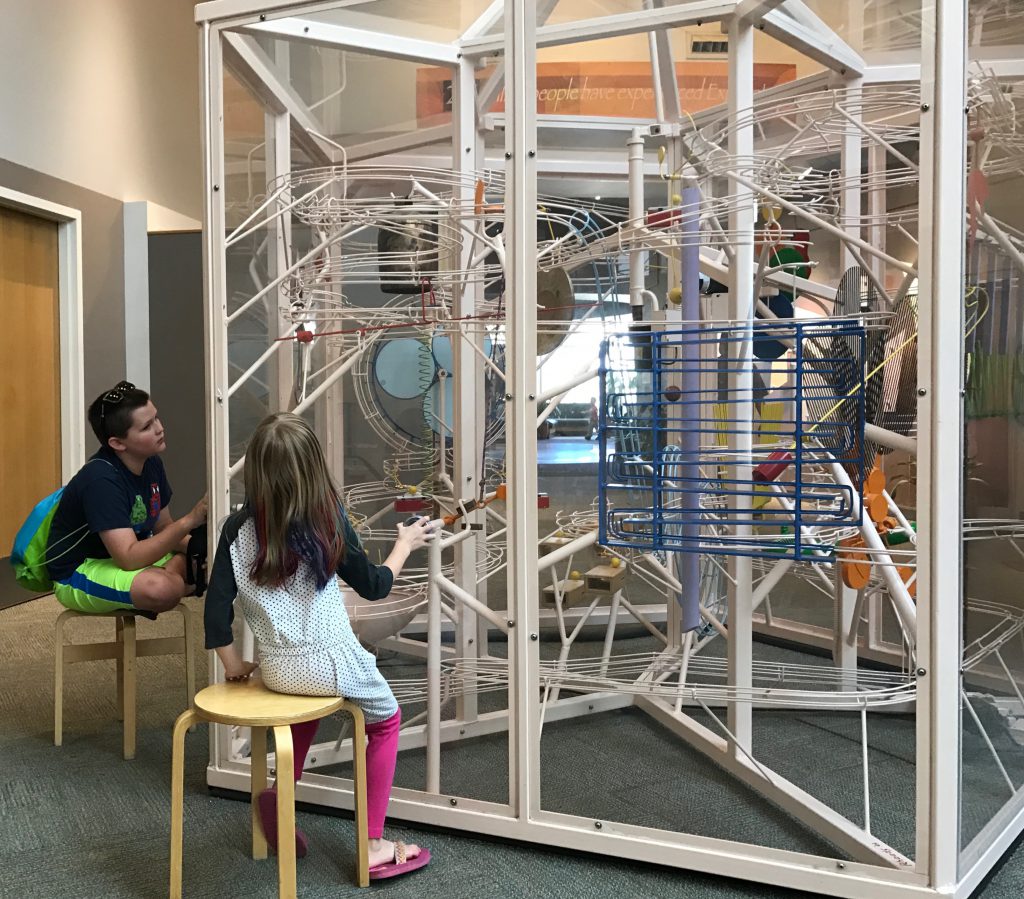 nearby, someone had made a pretty good marble run and hazel had to test it out, while anna and isaac were mesmerized by the ball maze contraption. 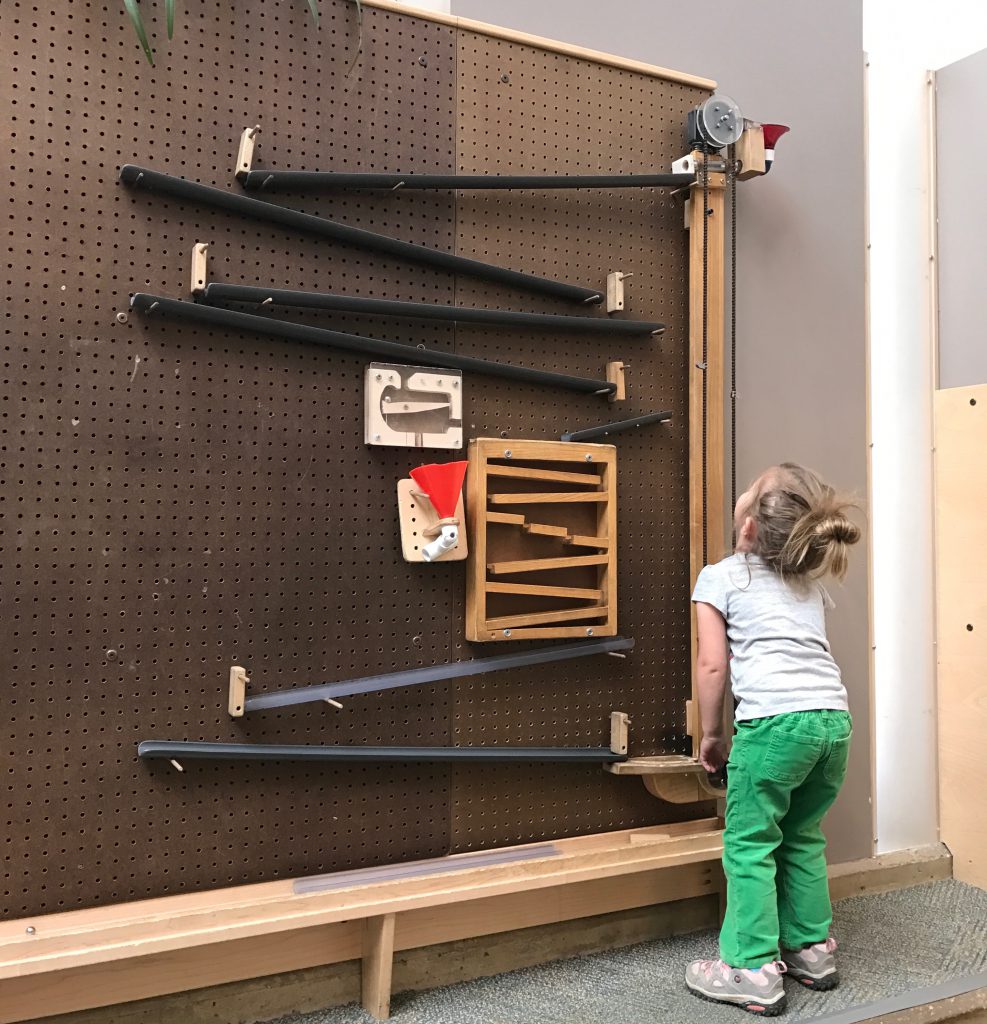 we were starving, so we grabbed some absolutely terrible hotdogs from a vendor across the street, who preys on moms of small, tired, hungry children. and then we rolled back to our sweet campsite spot at the walmart parking lot. when derek was done working, we visited rei for a few necessities and non-necessities. and then we decided to drive around ABQ to find notorious filming locations from (the best ever tv series of all time) breaking bad.

our first stop was twisters, which was the “los pollos hermanos” owned by gus fring. weird story. there was an ostrich in the lot next door. a really dirty, kind of mean looking ostrich. also, when derek opened his door, there was a pair of dirty boxers in the parking lot. gus wouldn’t have approved of that. 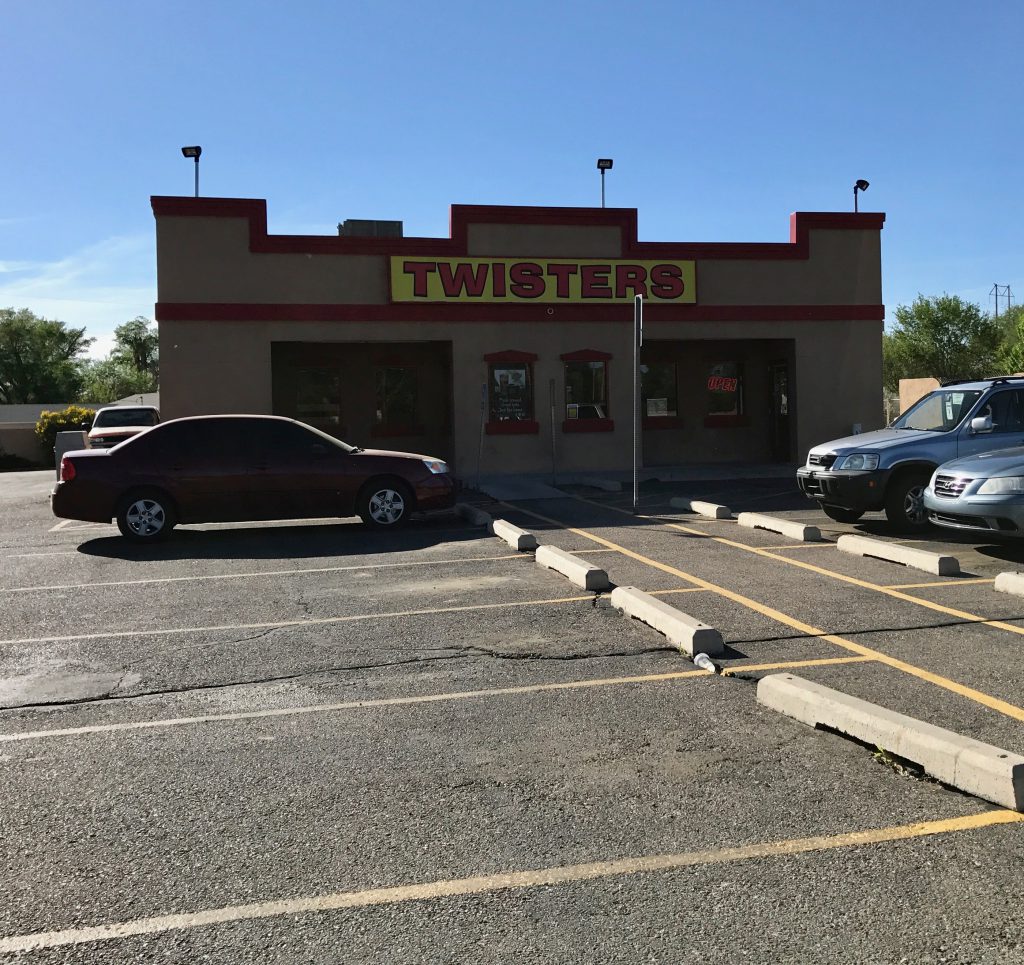 just inside the door was this homage to the show’s fake fast food establishment (and drug running cover). 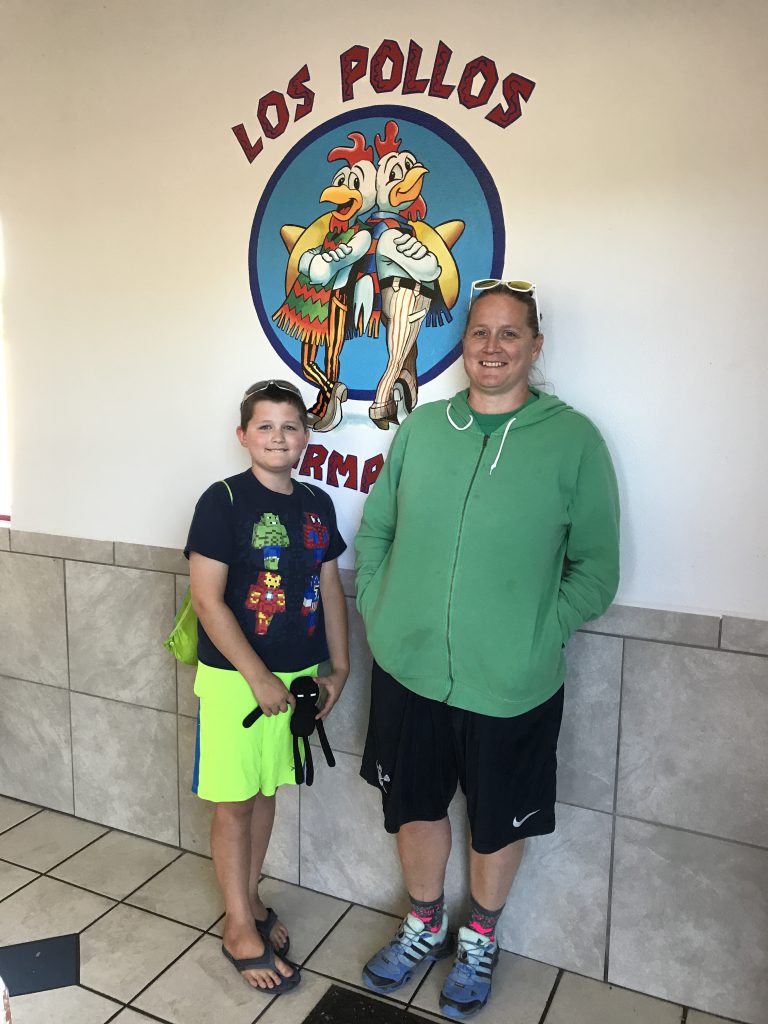 we actually went in to eat. and i sat in walter white’s booth. obviously. they were playing an episode of breaking bad on a big tv, which is hardly family friendly programming. they really embrace their place in cinematic history. 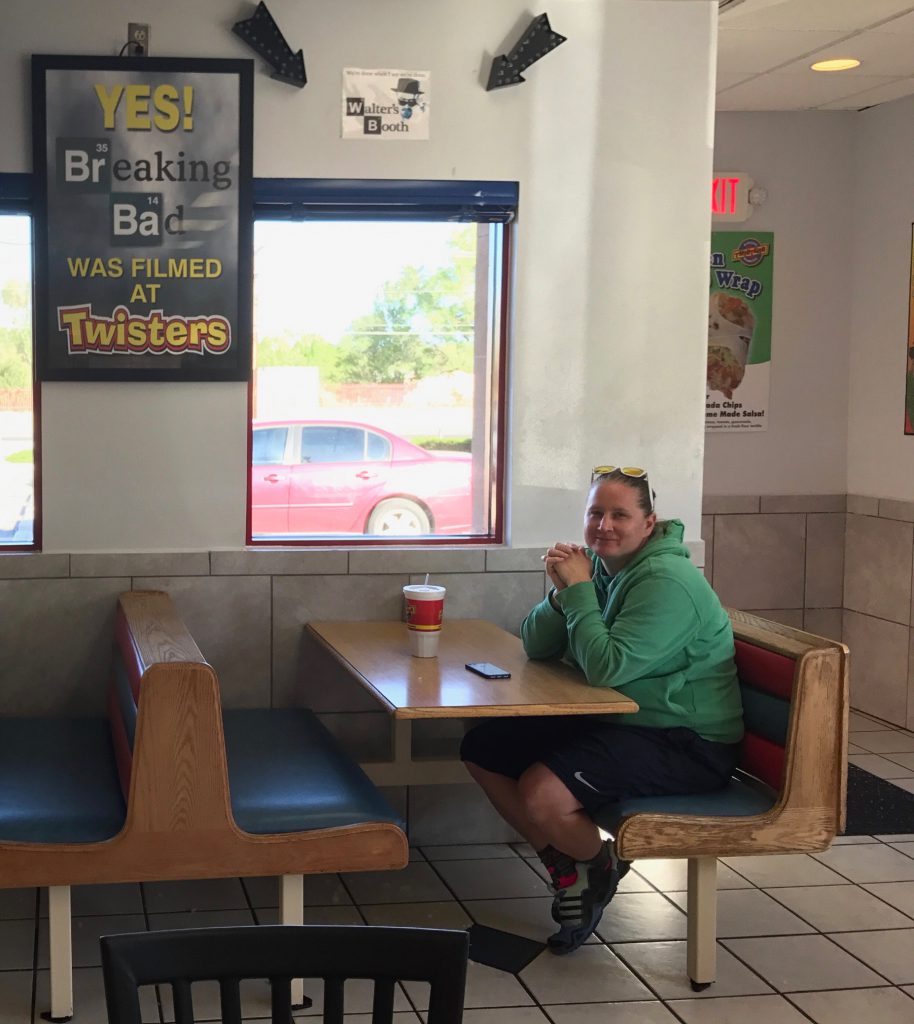 from there, we drove over to a section of town that had a few spots. first up, was the carwash. we did a quick driveby photoshoot. 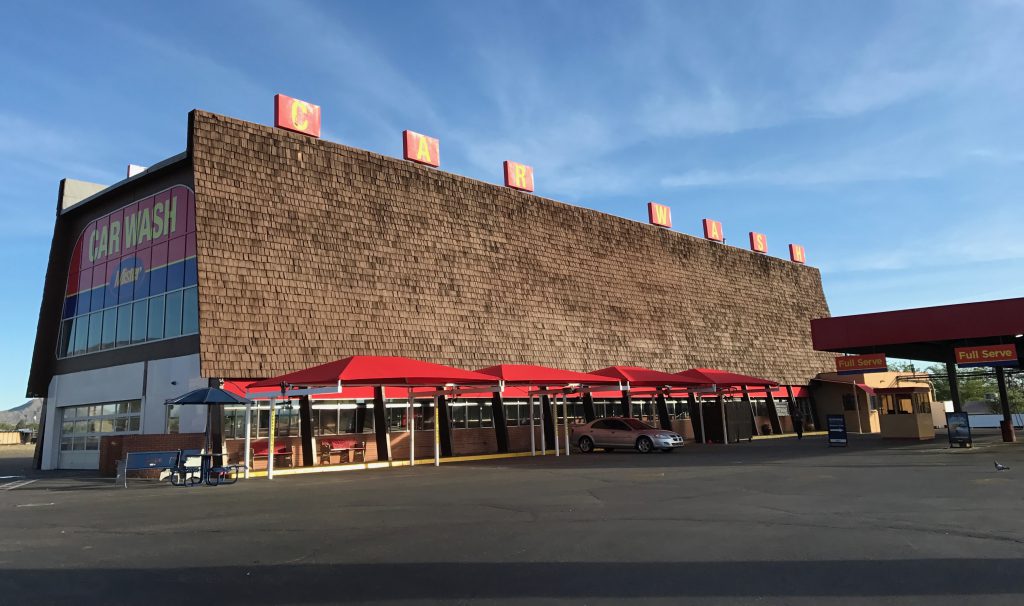 and then on to walt’s house. word on the street is the people who own the house are pretty grumpy with their new found fame. i suppose super fans throwing pizzas on their roof to recreate famous scenes could make them that way. but they have beefed up their security and surveillance systems and if they are home, i guess they are pretty confrontational. thankfully, they weren’t home, and we did another drive by photo. (side note: i don’t feel THAT bad for them. i’m sure they were sufficiently compensated and no one held a gun to their head. then again, i’m sure they couldn’t have predicted the show’s popularity). 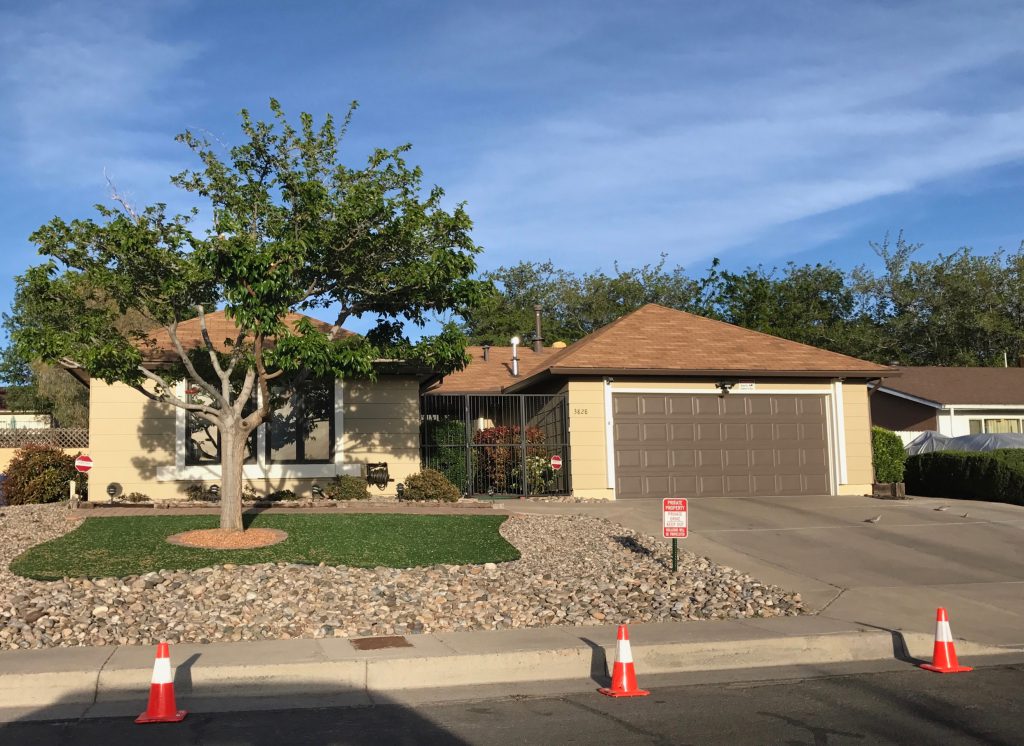 we decided not to go out to hank and marie’s house or the park where mike takes his granddaughter (or any of the other zillions of spots on the google map someone made, marking the filming locations of notorious and some obscure scenes). back to the camper. where i looked up “better call saul” scenes (the breaking bad prequel) and happened upon a similar google map marking the locations. and was grumpy, because we were right near chuck’s house when we were at the science center. and our walmart campsite was next to the mall where gene works at cinnabon. maybe next time….

One Reply to “albuquerque day (explora and breaking bad).”