on our second full day at yellowstone, we took it pretty easy. derek had to work, so it was just me and the three kiddos, so we decided to hit the junior ranger station closest to our entrance and then stroll around the artist paint pots boardwalk and take in some geothermal activity.

the junior ranger station is pretty cool. they have a program every half hour, mostly all day, so the kids were able to knock out that part of their junior ranger requirement pretty easily. (the adult programs are often over their head and frustrating). also, there weren’t many people there, unlike the other visitor centers. 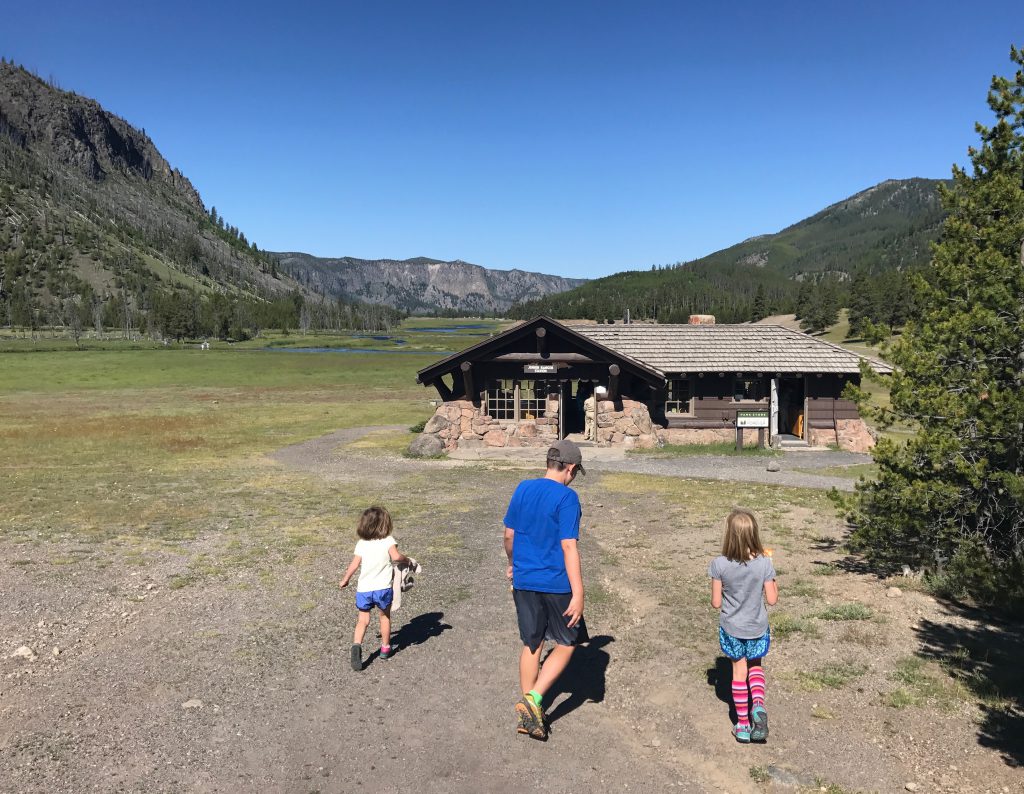 the program we went to was call “bug me” and was all about insects. it was very hands on (no real bugs) and all three kids were willing to participate. 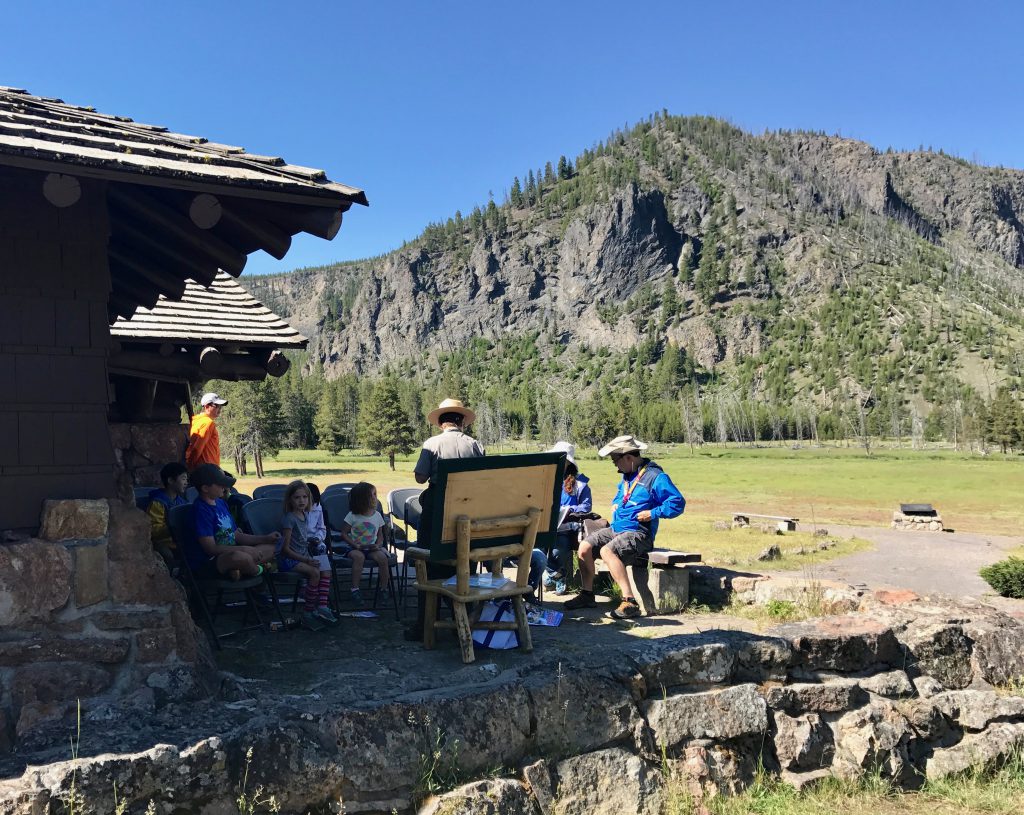 hazel was able to put all of her cards in the correct columns. 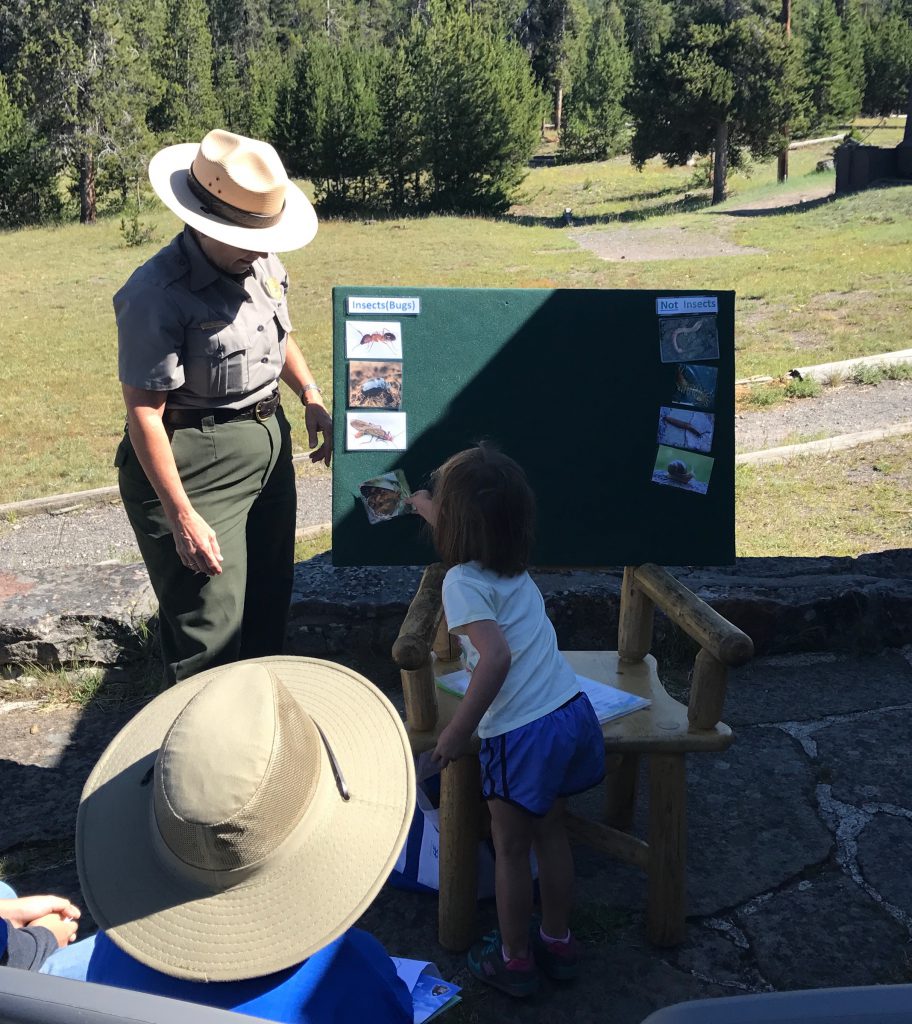 isaac too, even though i would have gotten one of his wrong. he knows more about bugs that i realized, talking about 6 legs and 3 body sections and that millipedes have flat bodies. 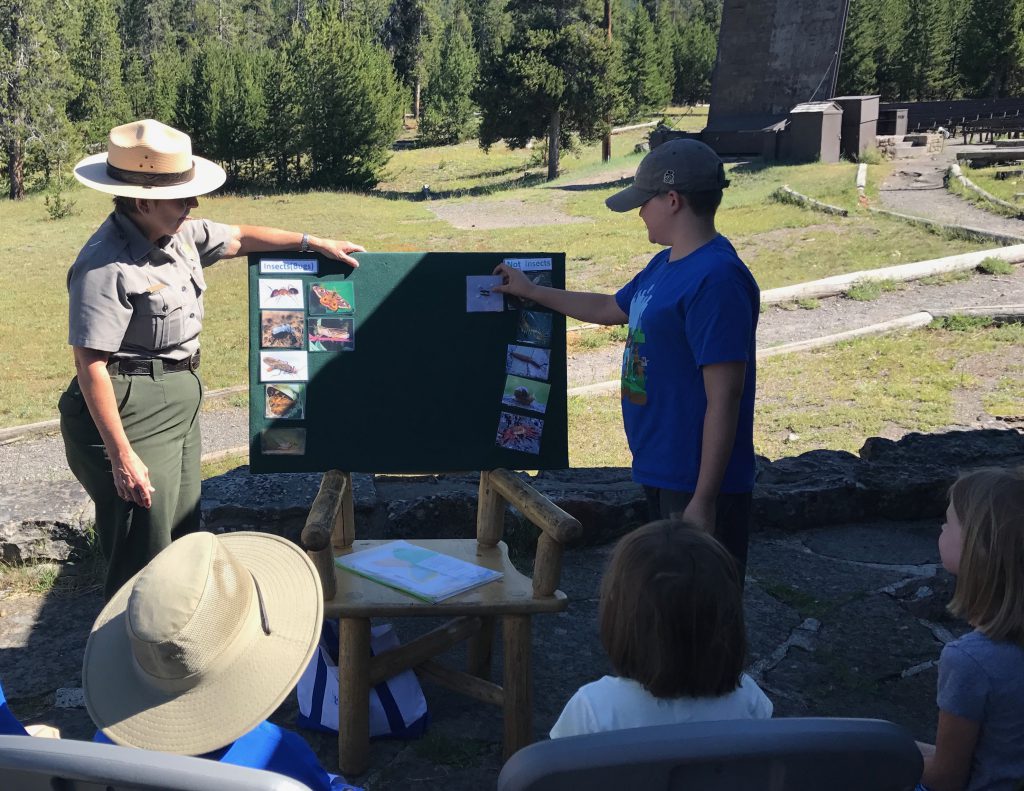 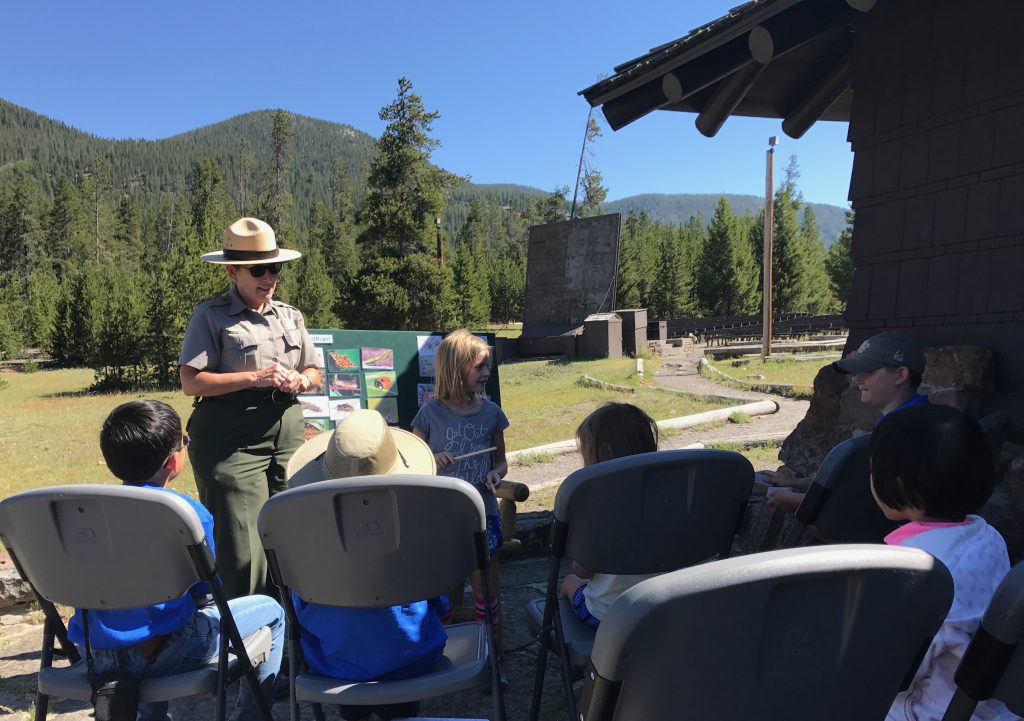 once we were finished and all signed and verified, we started to head towards the artist paint pots. but first, we (i) decided to stop at a parking area for the gibbon waterfall. this is the view of the river stretching out past the falls. you have to stroll a little bit down river to see the view of the falls. 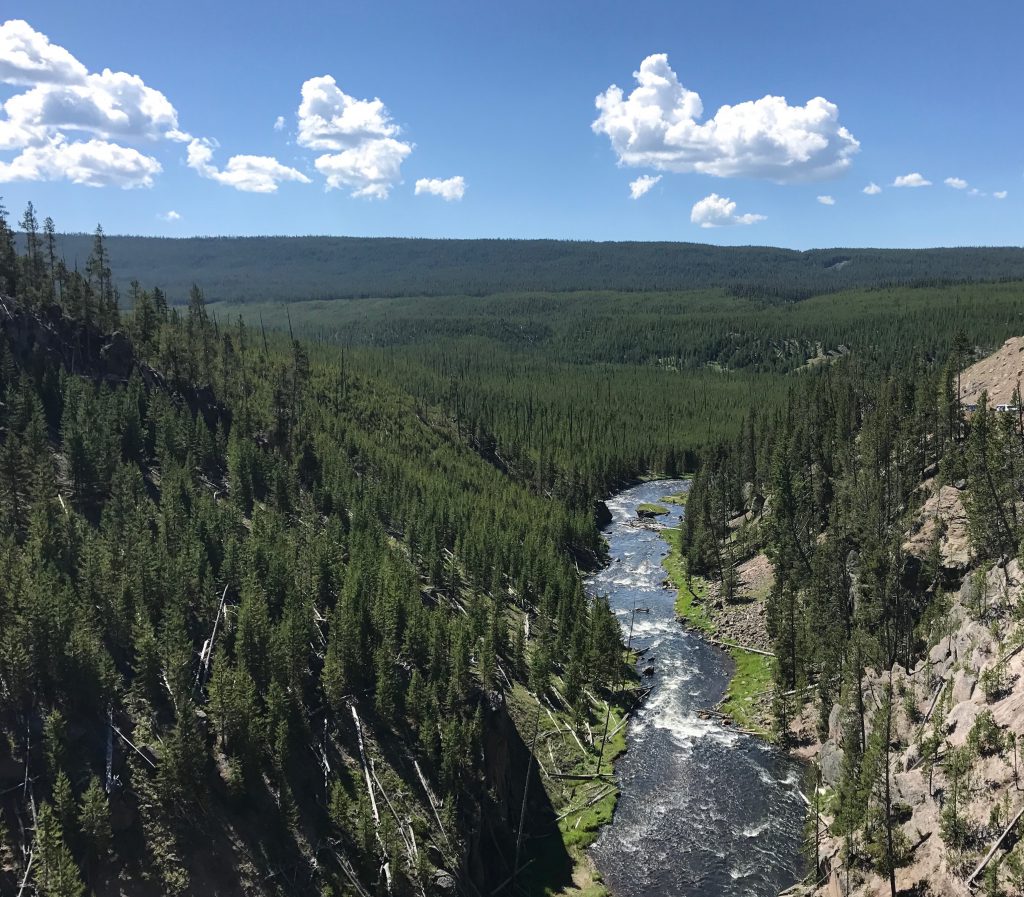 it was alright. again. just a waterfall. with sooooo many people fighting for parking spots to view it. 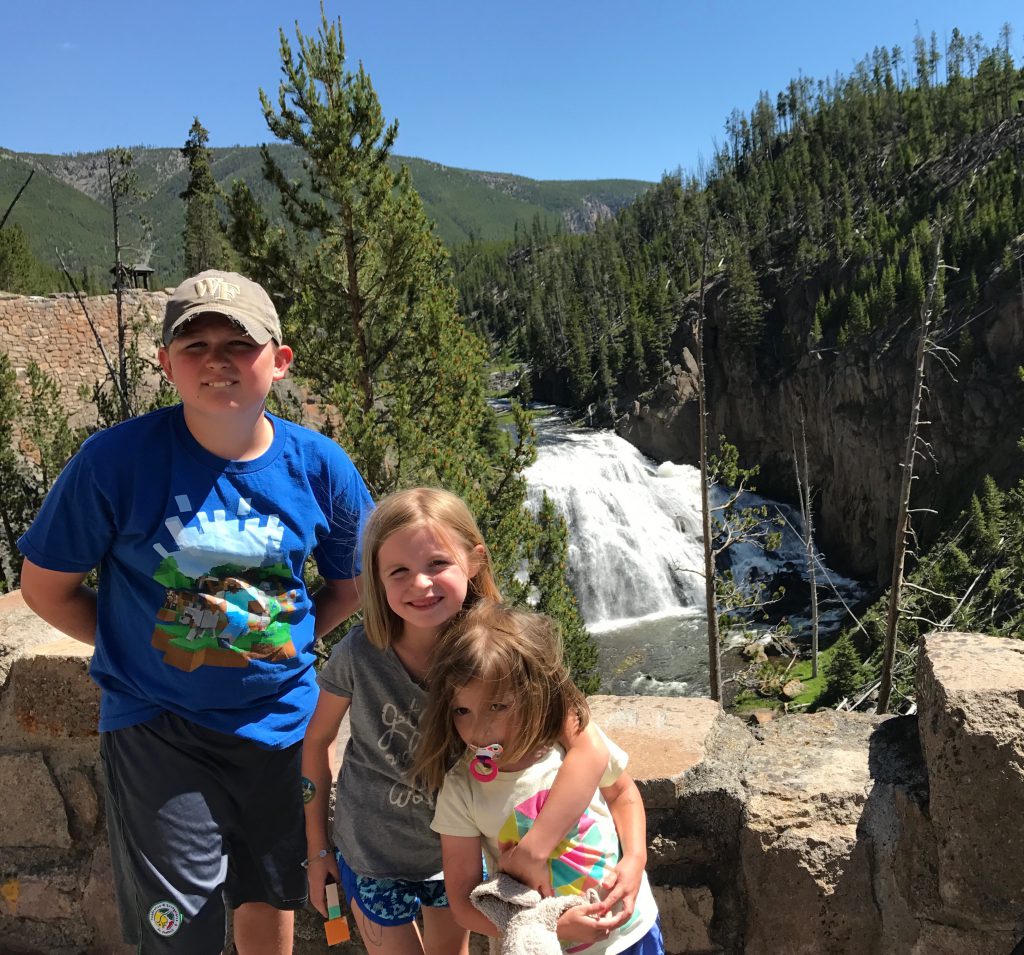 i mean. it’s pretty. i guess thats how it works in a national park with roads that go right up to things and no one has to do much walking or hiking to get to the cool stuff. 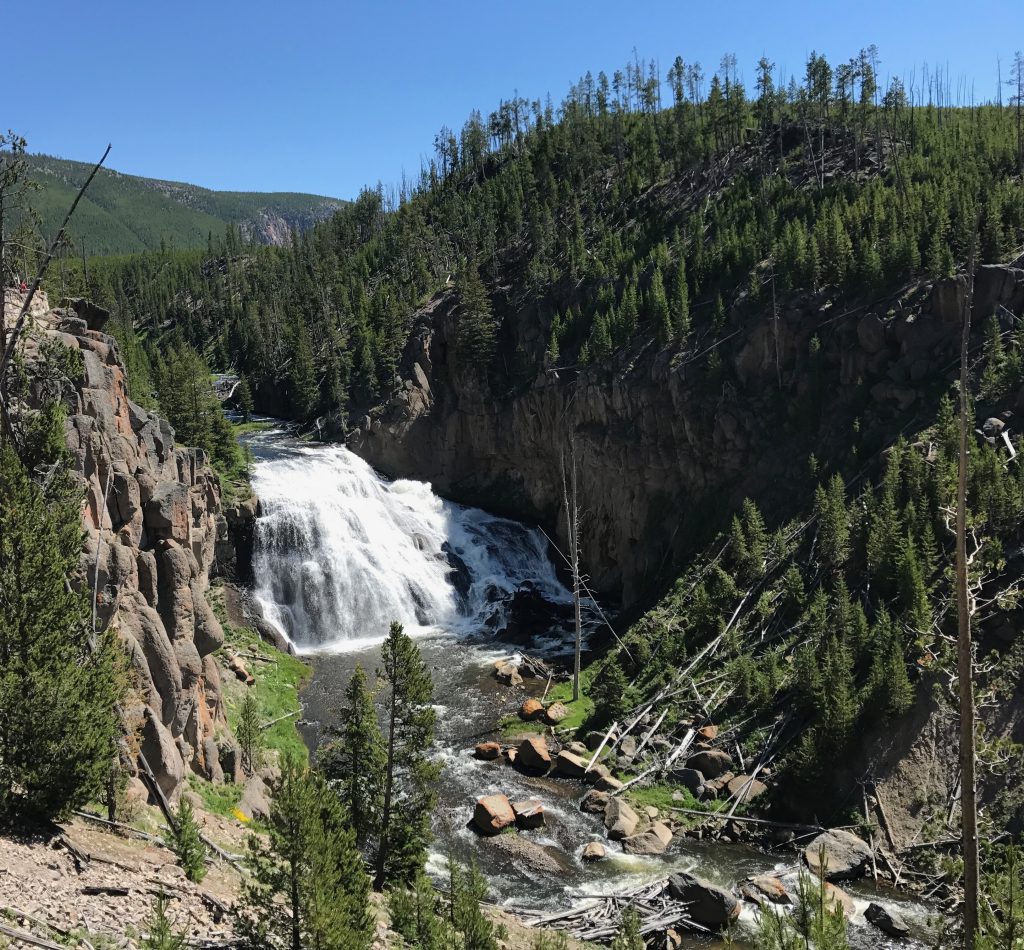 a small slice of the crowds. 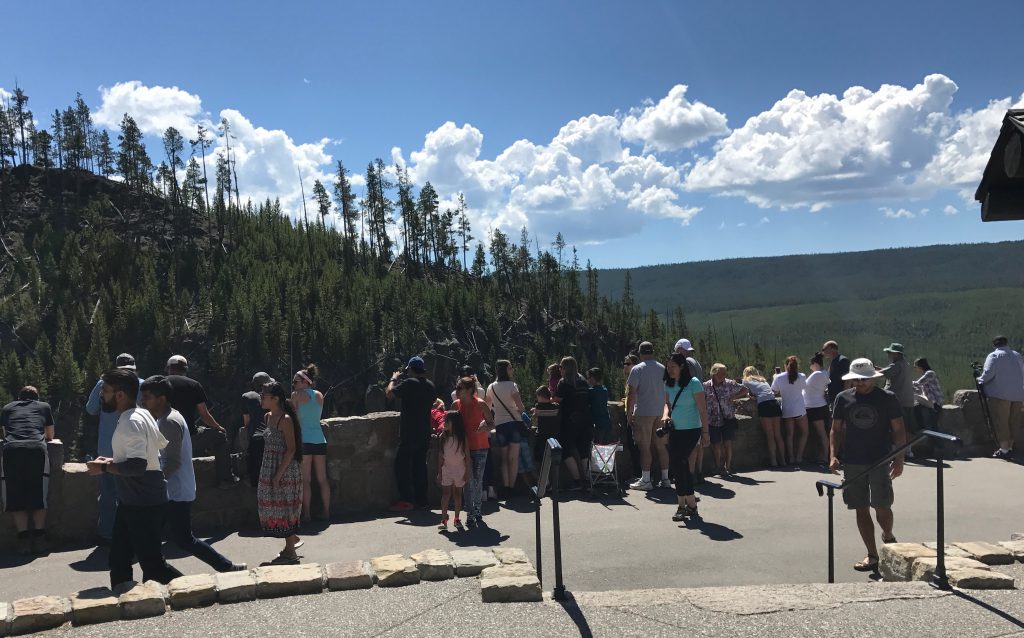 finally, we got back on the road. and made it to the artist paint pots. where we drove around the parking lot several frustrating times, trying to find a spot. people are crazy. i watched as the car ahead of me put it’s signal on to take a spot that someone was backing out of. as the person backed out, and blocked the car in front of me for a split second before it pulled away, another car zoomed down the row and took the spot. it was serious business. eventually, went down the road a bit and parked on the side of the road and walked in. off to the paint pots. 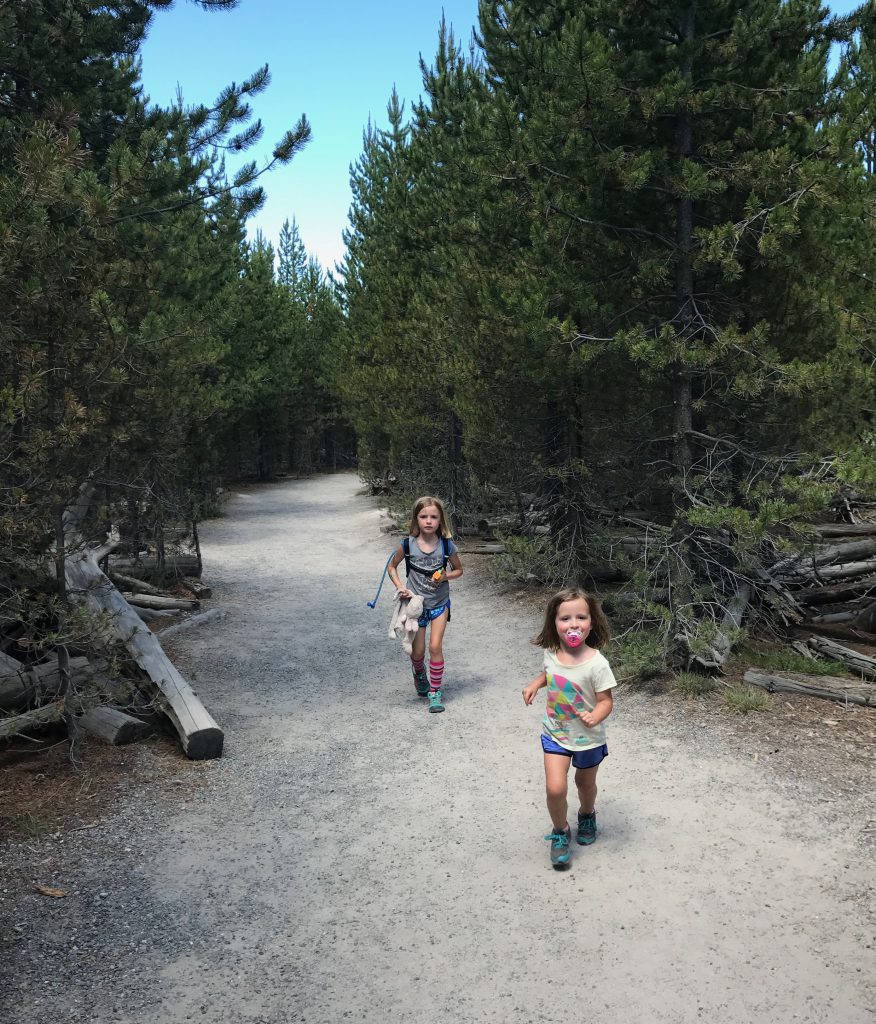 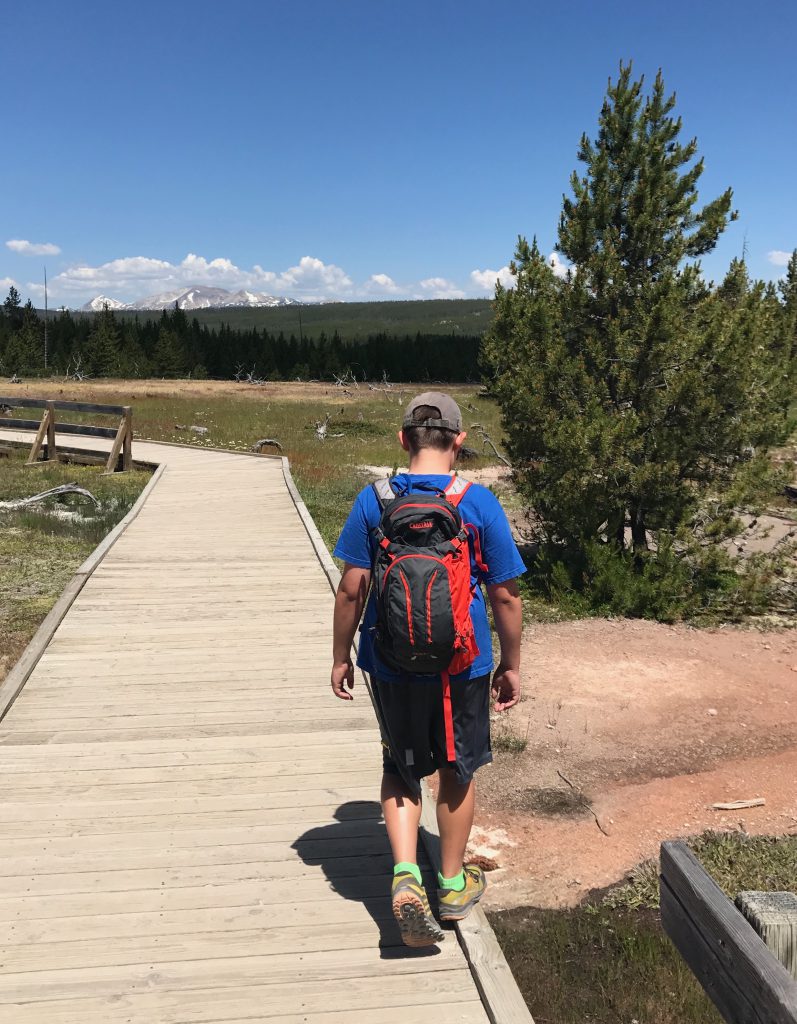 the kids were grumbly when we came to some stairs, after yesterdays stair heavy stroll around mammoth hot springs. but they survived. 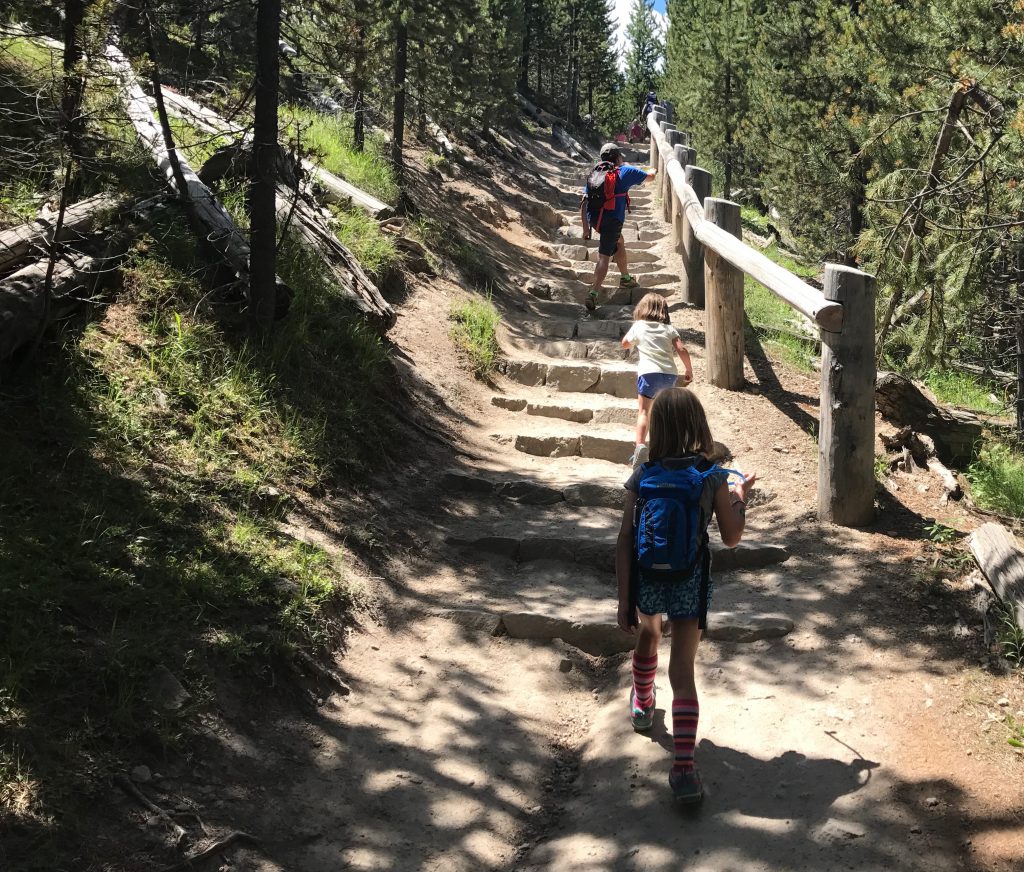 the first thing we got to at the top of the stairs was this bubbling mud pot. the pictures don’t capture it great. but the sunken in part was thick mud, that was bubbling and gurgling and sounded like bodily functions. and isaac said it smelled like ham. it was their favorite part. we stood and watched for awhile, laughing at the sounds. 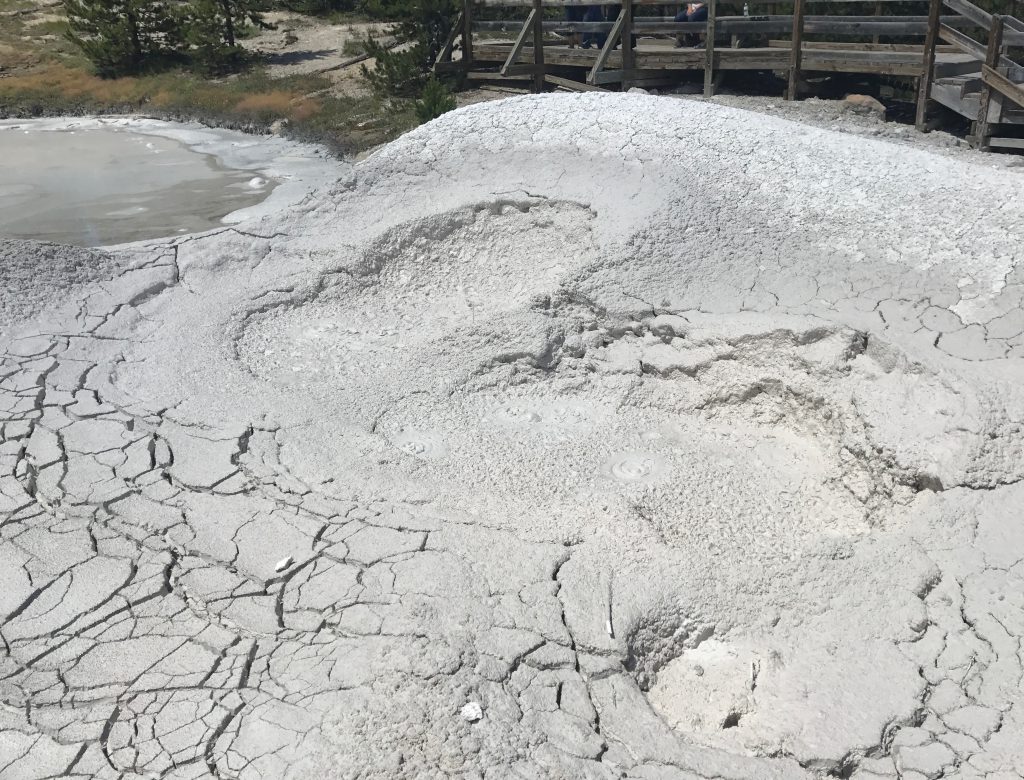 the rest of the walk along the top was mostly cool for the views in the distance and down across the entirety of the paint pots area. 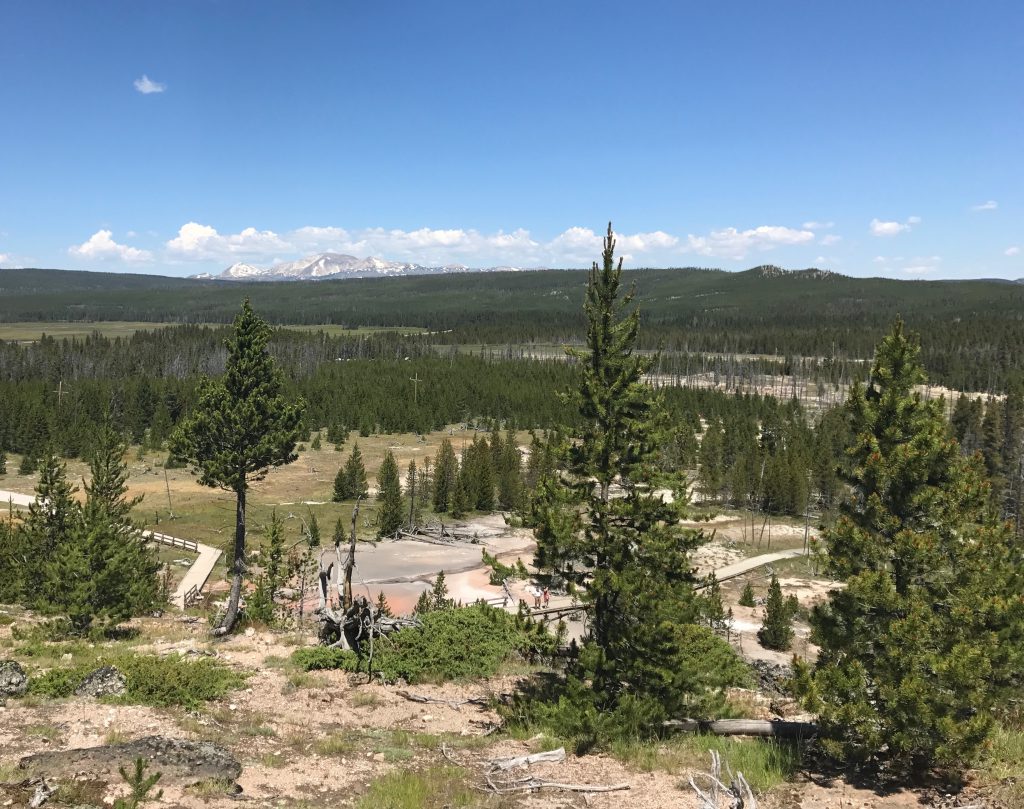 the orange parts are deposits left by the hot springs as the water travels down the hills. 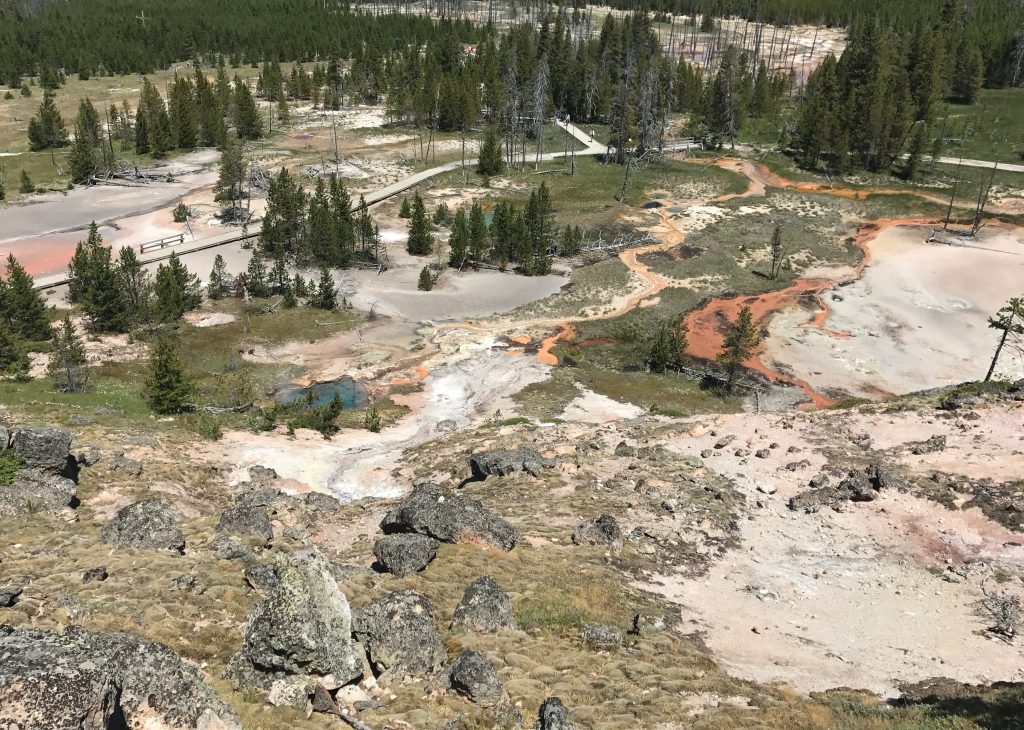 i took a pic of the kids at the top but for some reason it was black and white and by the time i had fixed my phone settings, more folks had moved in for photos and my kids were over it. so, one more pic of the side of the hill is all you get. 🙂 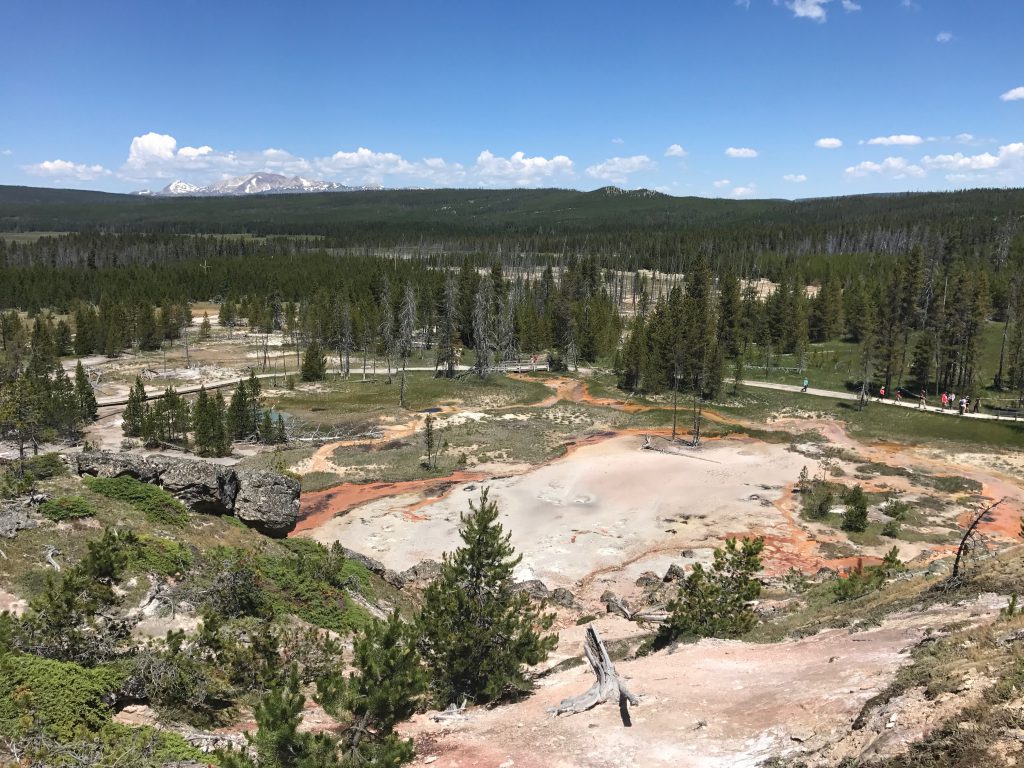 on the way back down, we got a good view of this cool clear spring and an ever erupting geyser in the background. 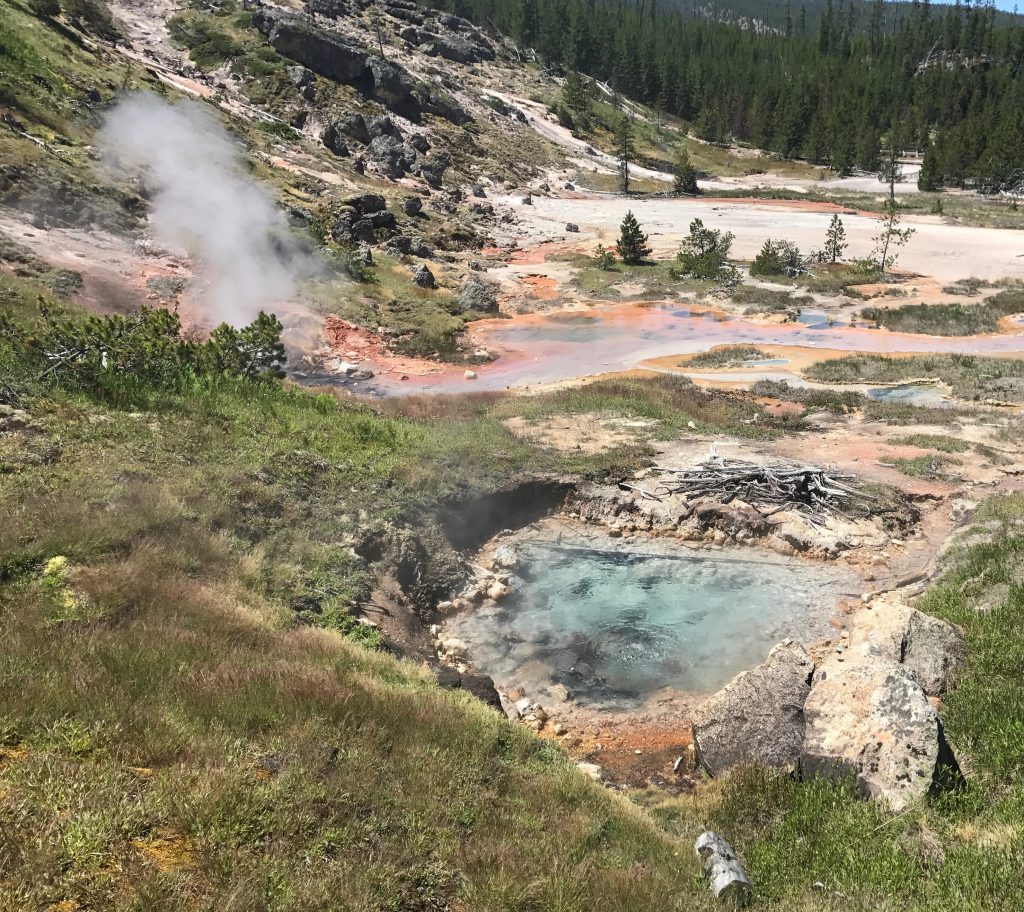 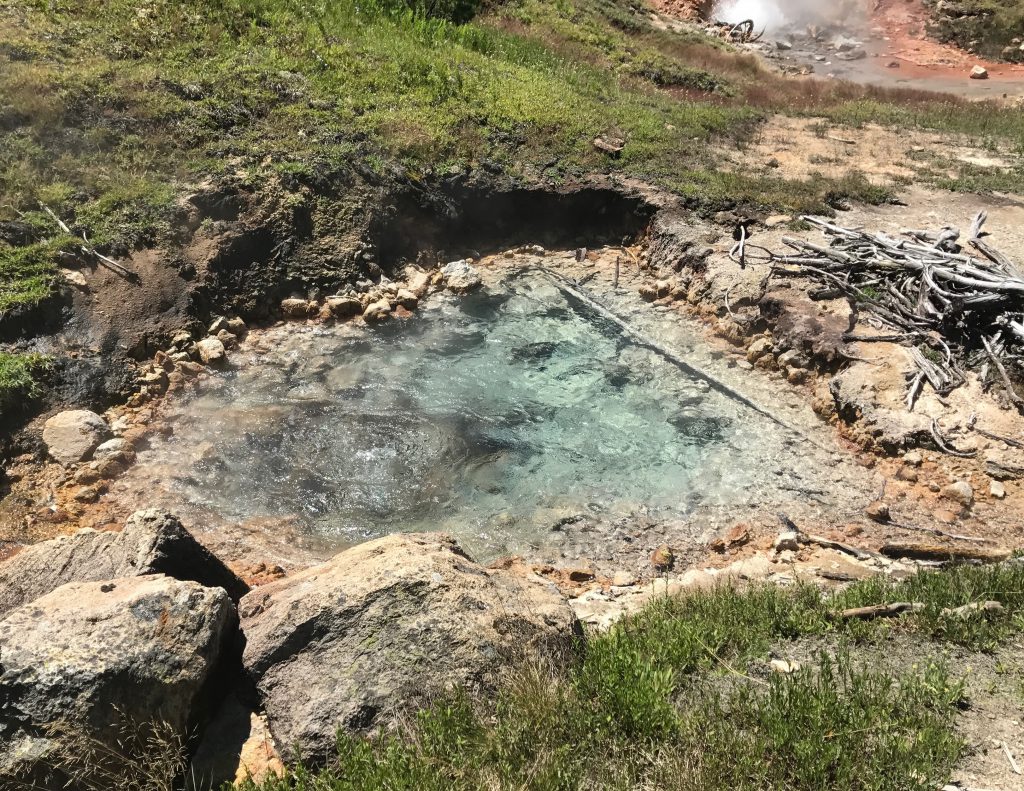 and the “blood geyser” because it turns the rocks around it blood red. 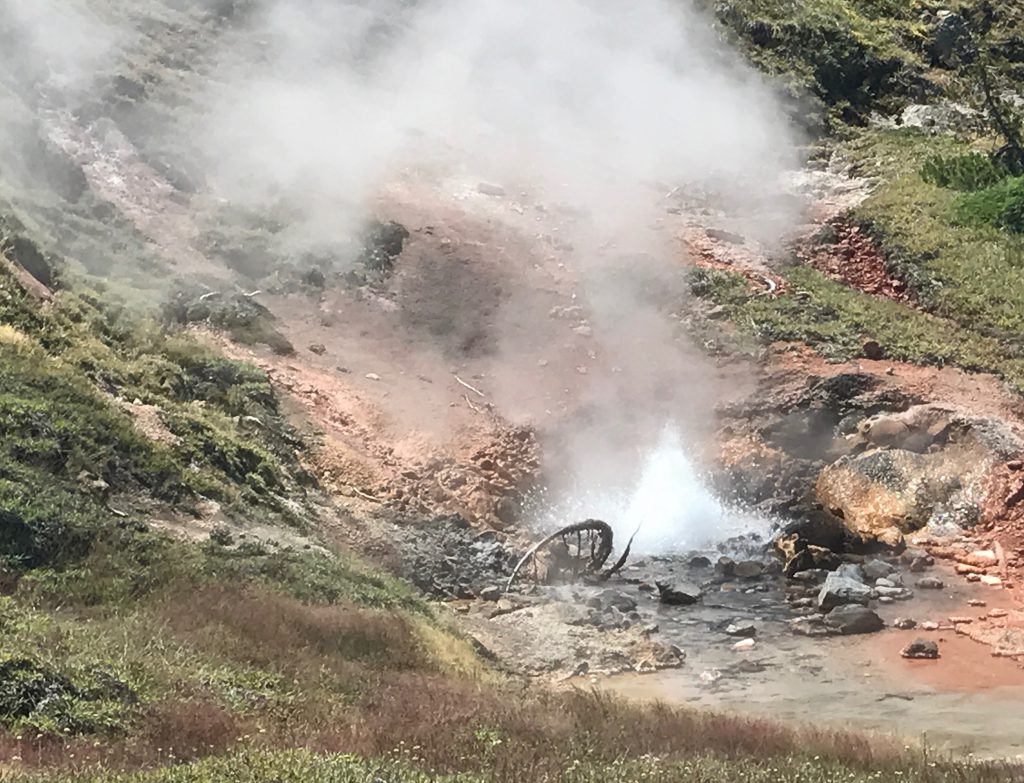 i joked about going back up to see the mud pots and both older kids yelled NO! at the prospect of the stairs. but hazel wanted to go back. i reminded her of how much she hated the stairs and cried about being tired, but when we got to the parking lot and she realized we hadn’t gone back, she burst into tears, crying that she wanted to see the mud pots again.

anyhow, we loaded up, drove to the campsite, and had a super chill afternoon. and geared up for our busy fourth of july excursion back into the park…

One Reply to “yellowstone.junior rangers and artist paint pots.”