when i found out we were returning to the general vicinity of zion national park, i had high hopes for lots of epic adventures. but, while we were there, we first made the executive decision to head home to nc at the end of our stay, and then amended that to leave about a week sooner, making it pretty hard to squeeze in all the adventures i had hoped for. i settled for one last hurrah for myself, an alone hike to observation point, for a fantastic view looking out across zion canyon.

i woke up super duper early, knowing that finding parking would be difficult otherwise, and arrived at the park while it was still dark. i took a bathroom selfie before catching the shuttle to the trailhead. 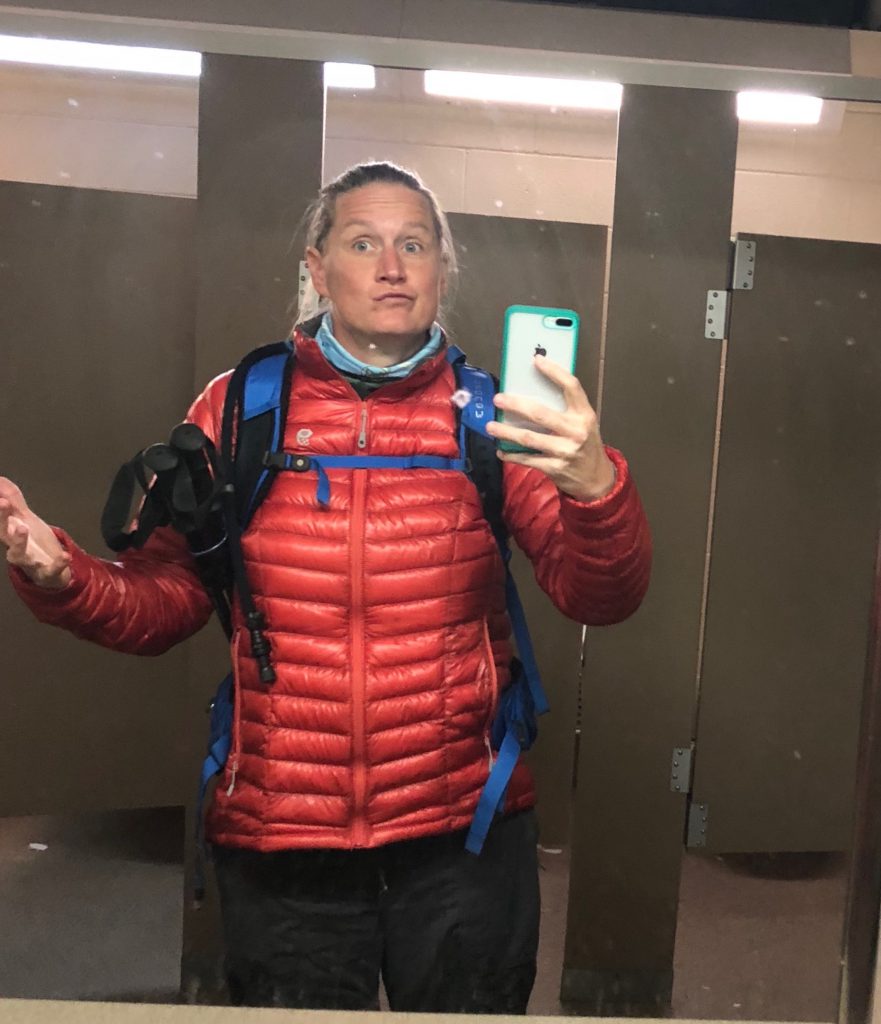 the hike is about 7.4 miles and 2700′ of elevation change and full of switchbacks. 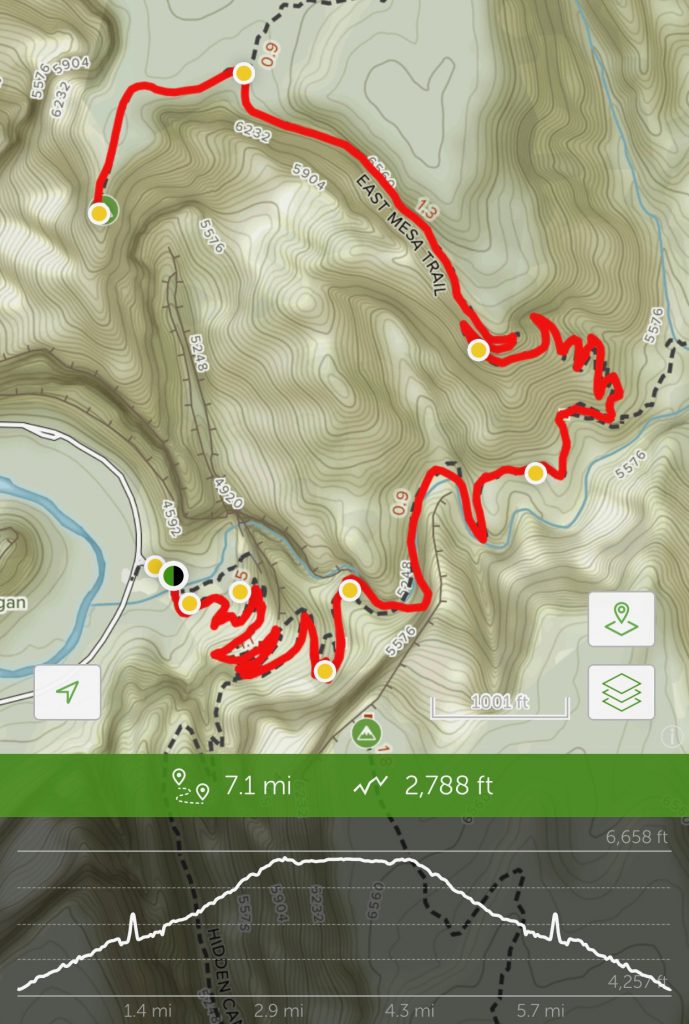 as i hiked the first bit, the sun slowly rose and lit up the canyon wall opposite of the trail. 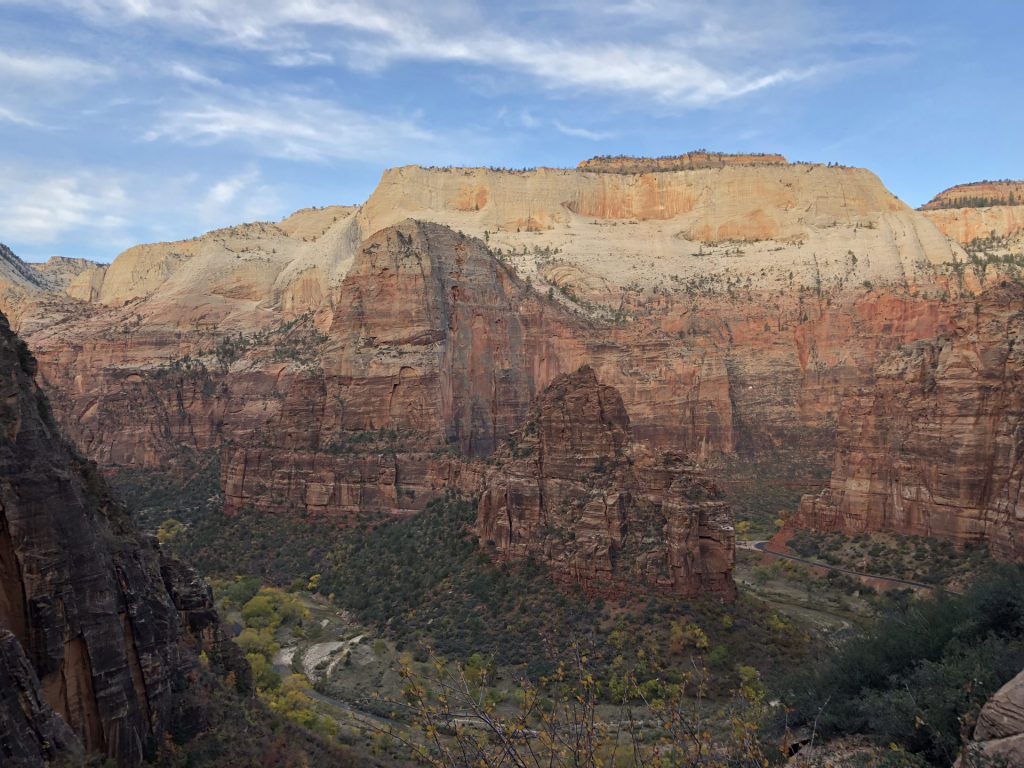 i kept stopping for pictures, knowing that when i got back they would all look the same. but it was a good excuse to catch my breath. 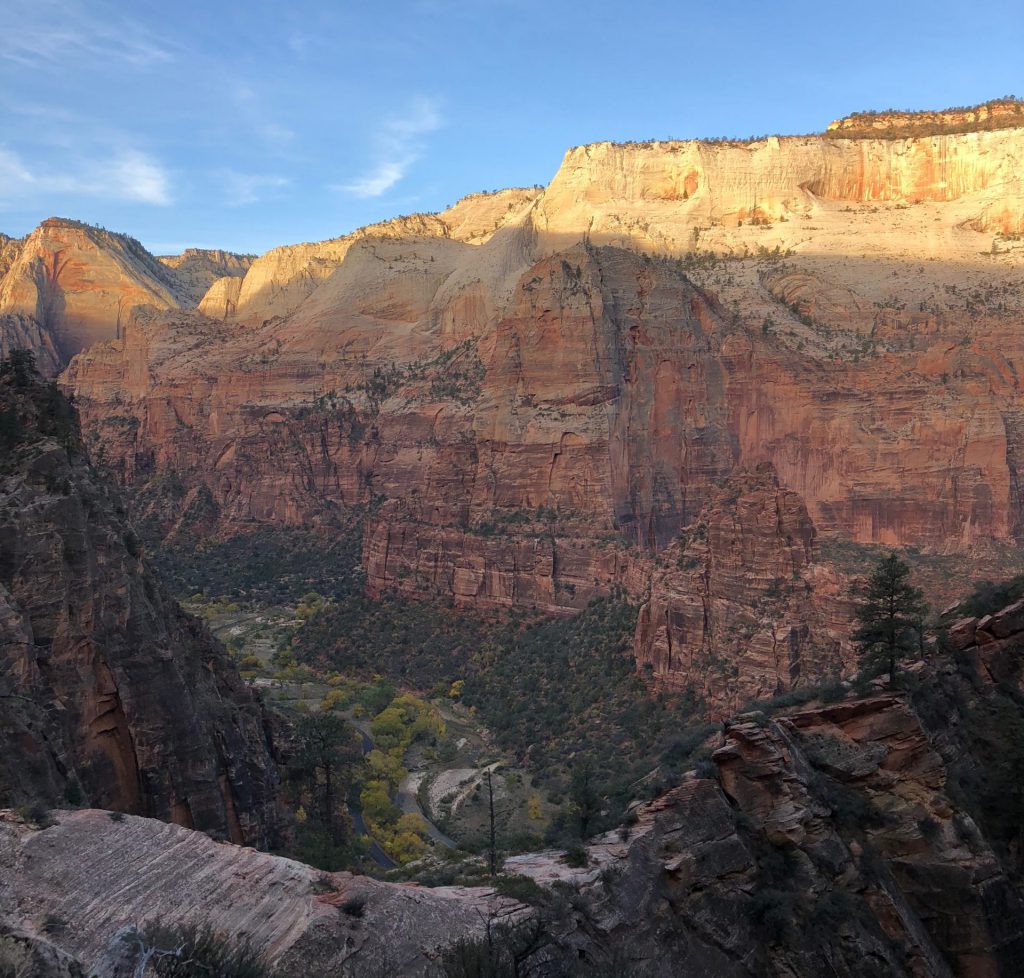 the coolest part of the hike was about 1.5 miles in (i’m guesstimating) when i reached a little slot canyon area. 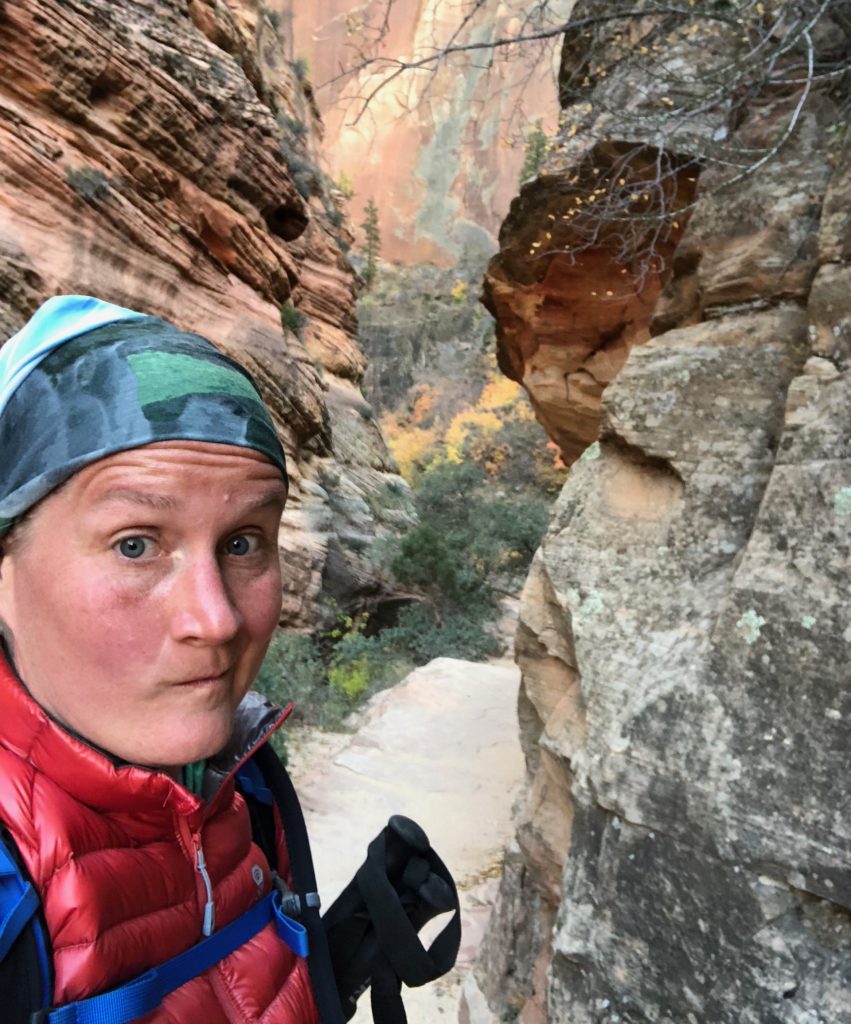 the fall colors also made an appearance. 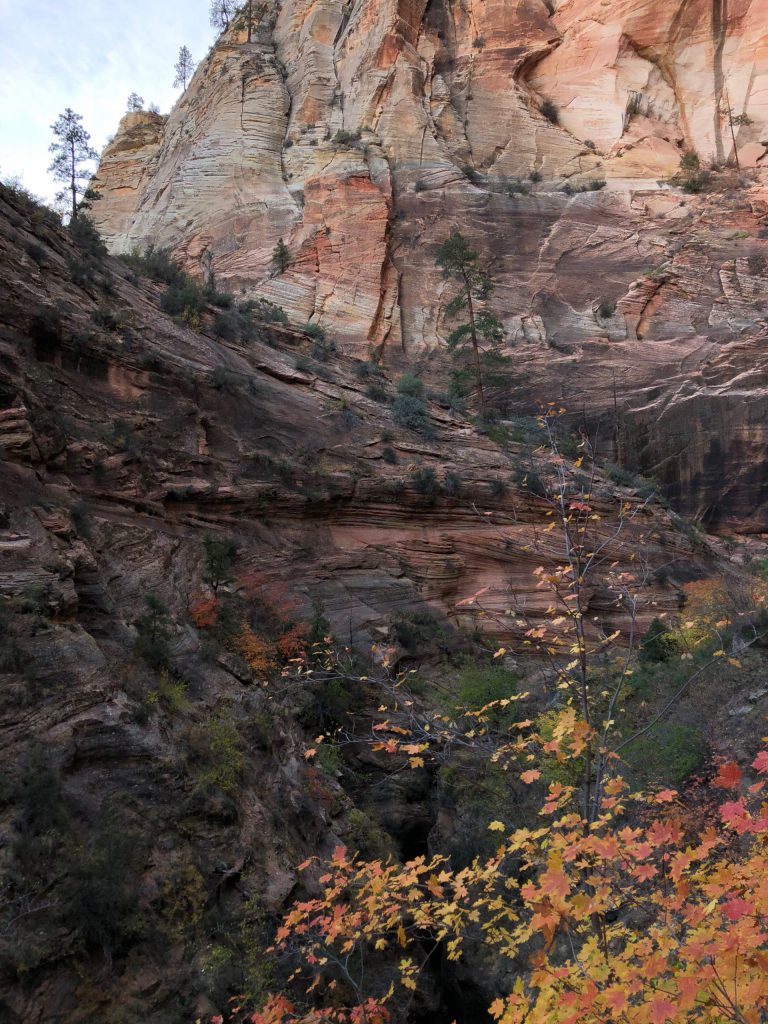 the slot canyon was also cool because it was pretty level, a pleasant respite amongst the switchbacks. 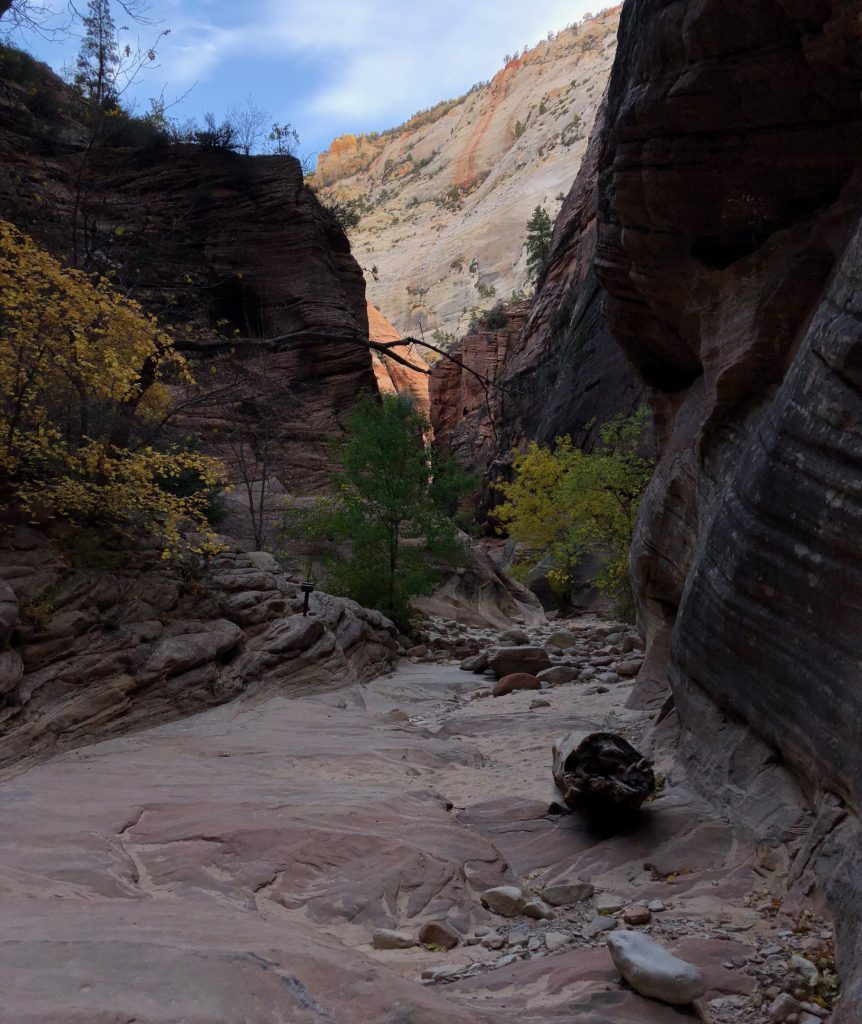 the water that carved out the canyon, hard at work. 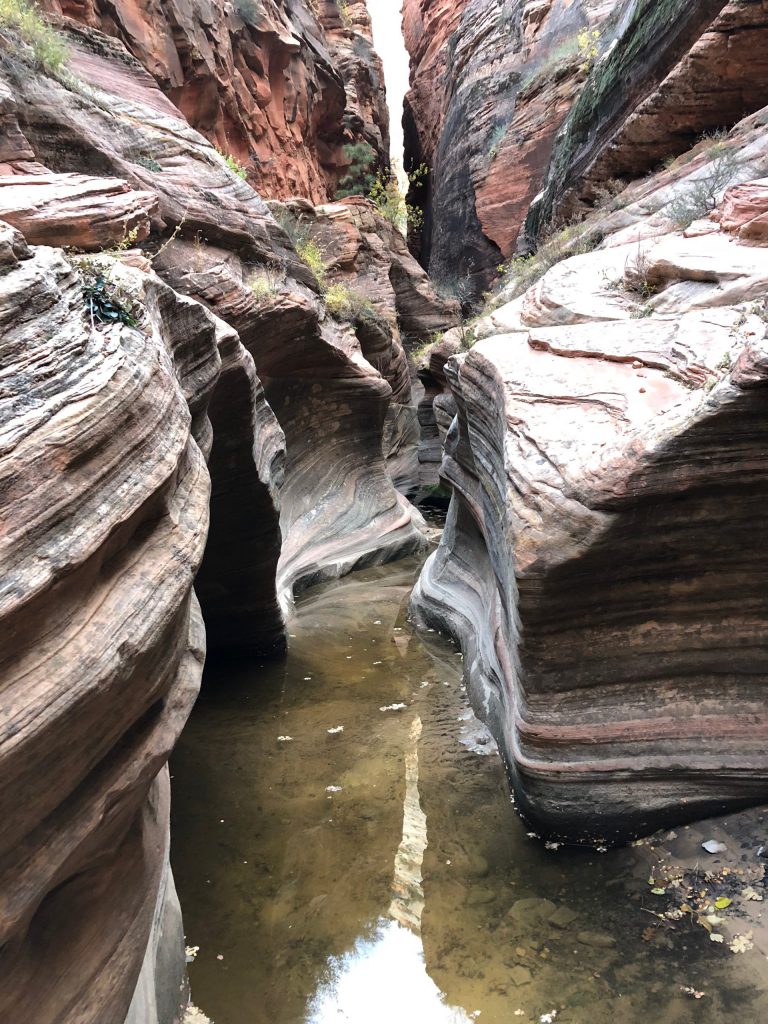 i kept waiting to roll an ankle, as i gazed up at the giant rocks around me, instead of down at where i was stepping. 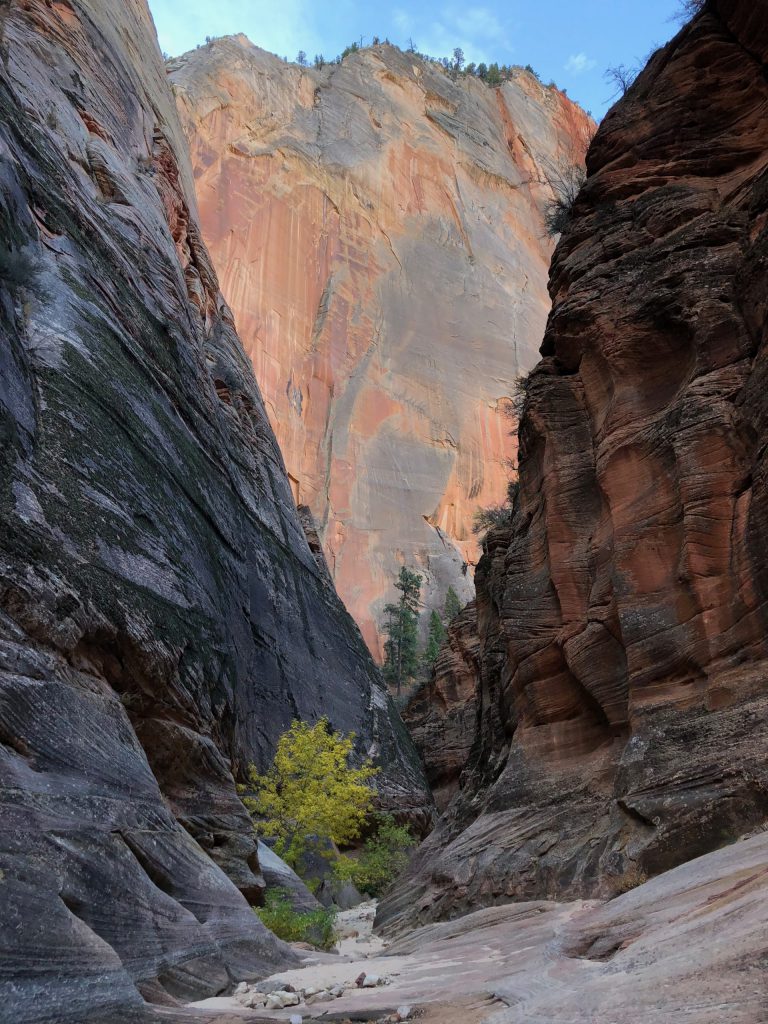 after a pretty brutal set of not very scenic switchbacks, i came around a corner to this fab view. the trail at this point was pretty wide, but dropped straight off into the canyon, so it was a little unsettling. 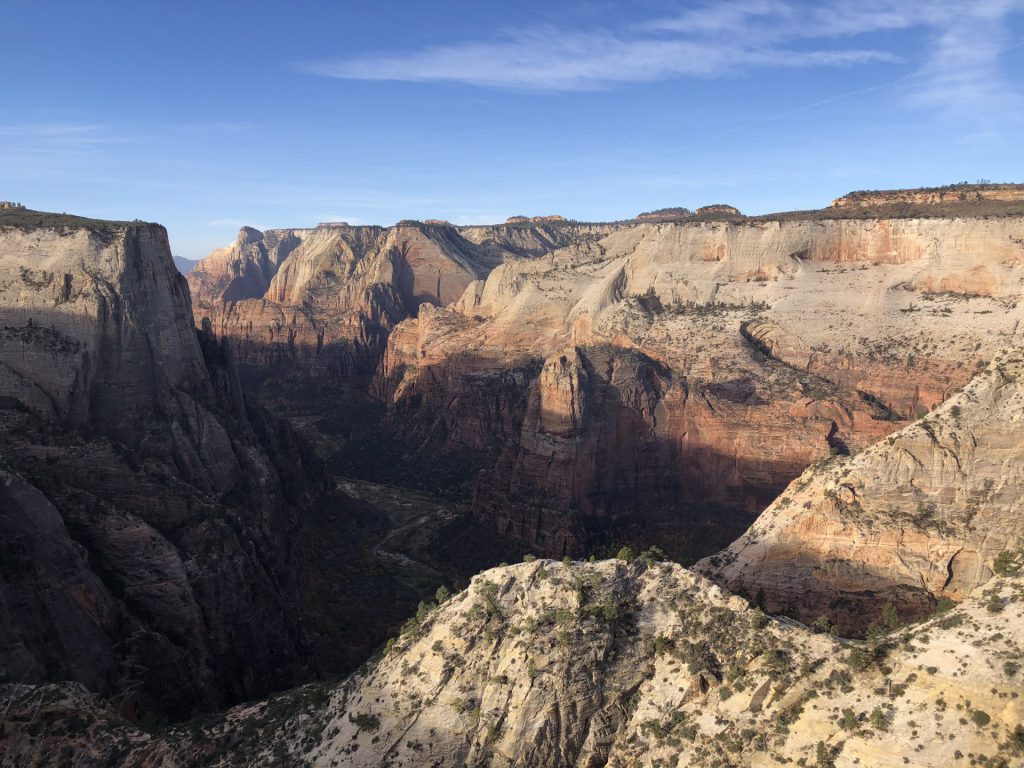 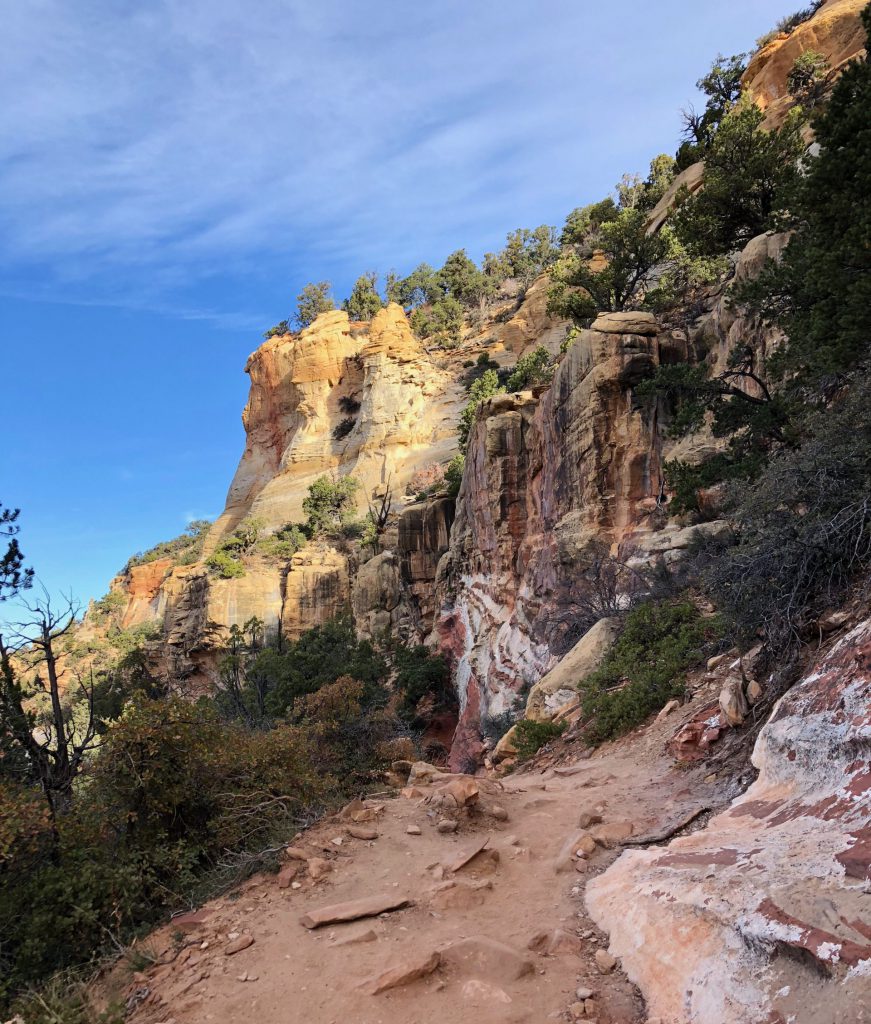 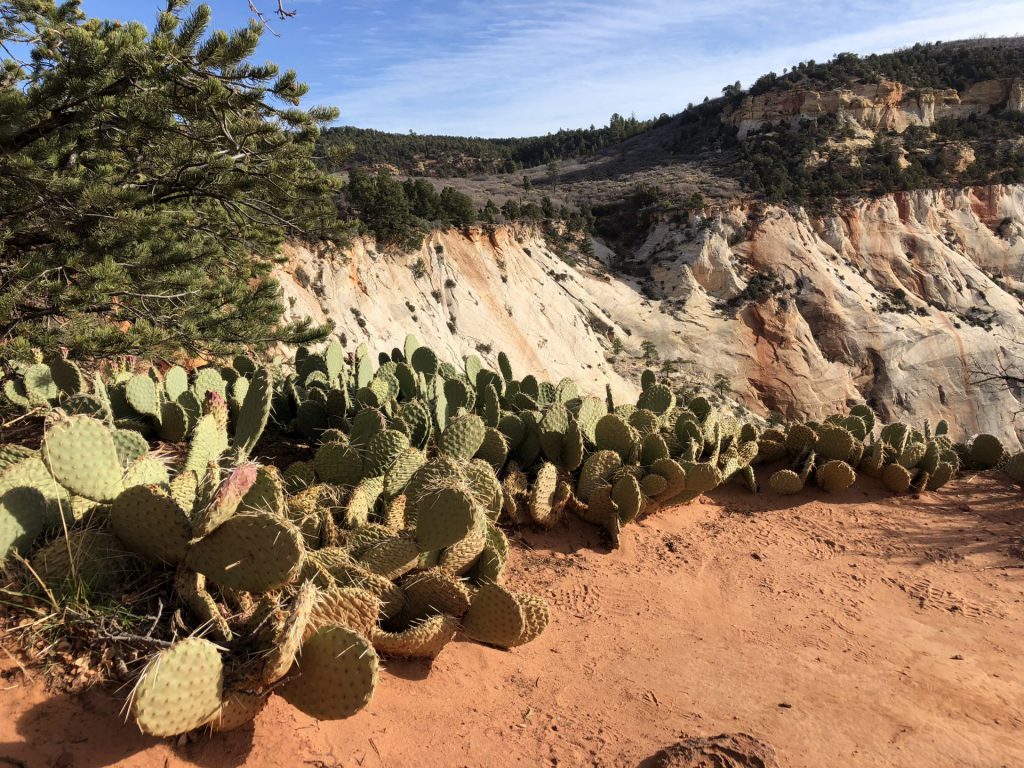 finally, i was at the top. the observation point. i observed. 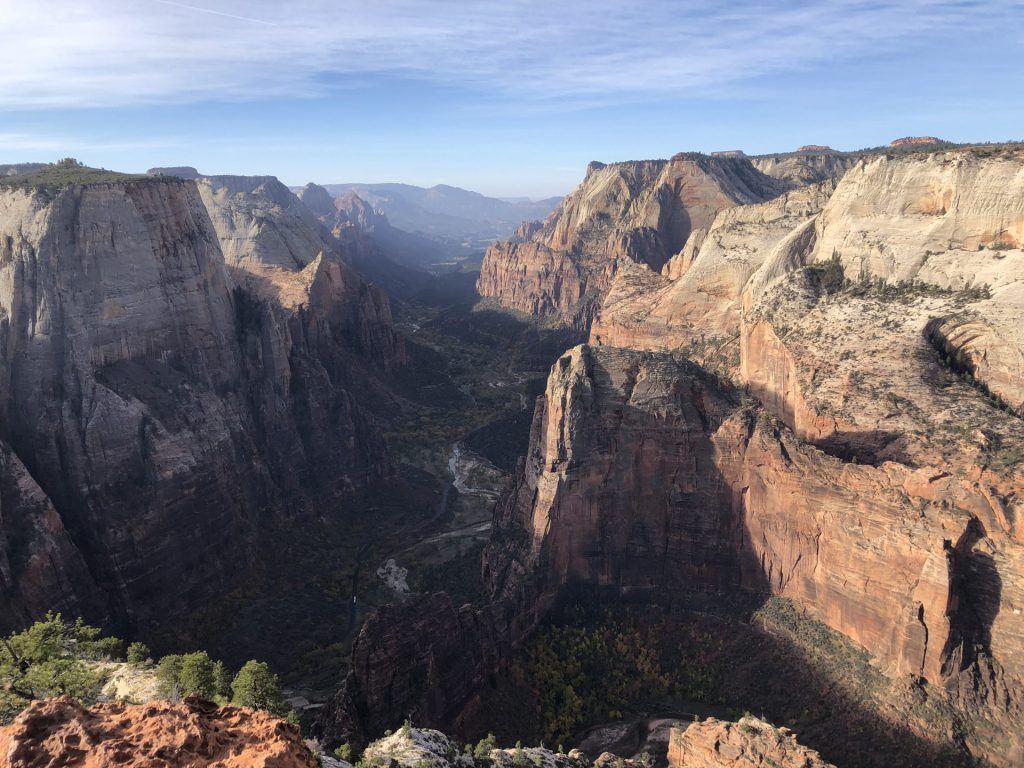 a friendly fellow hiker took some pics for me. 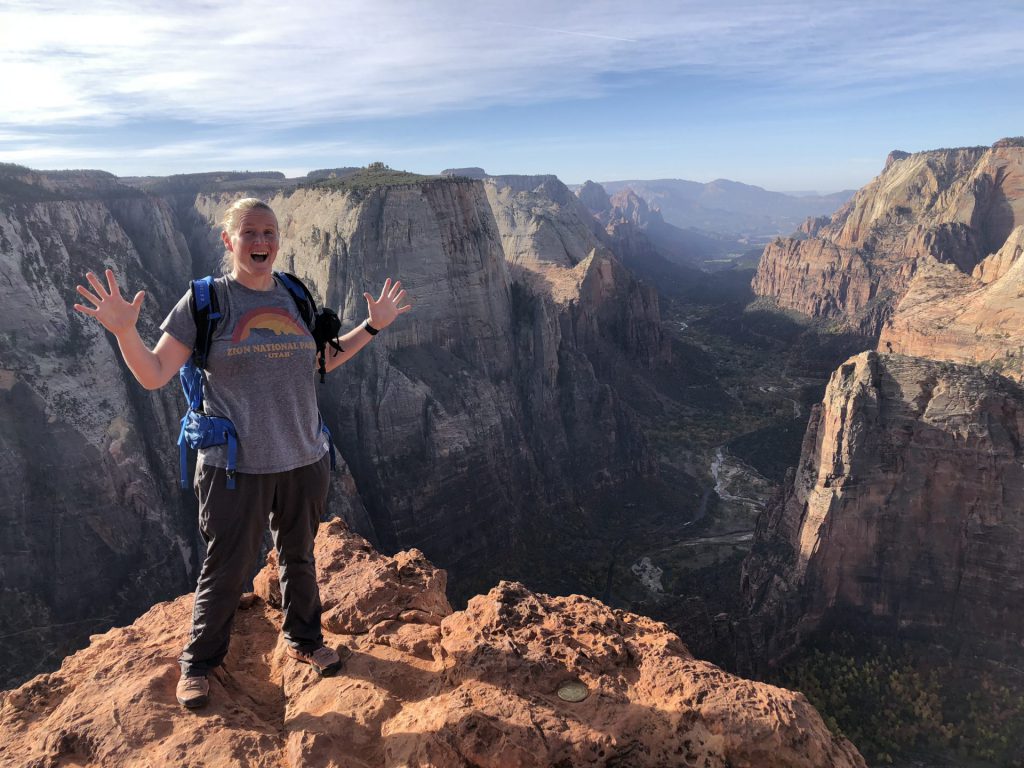 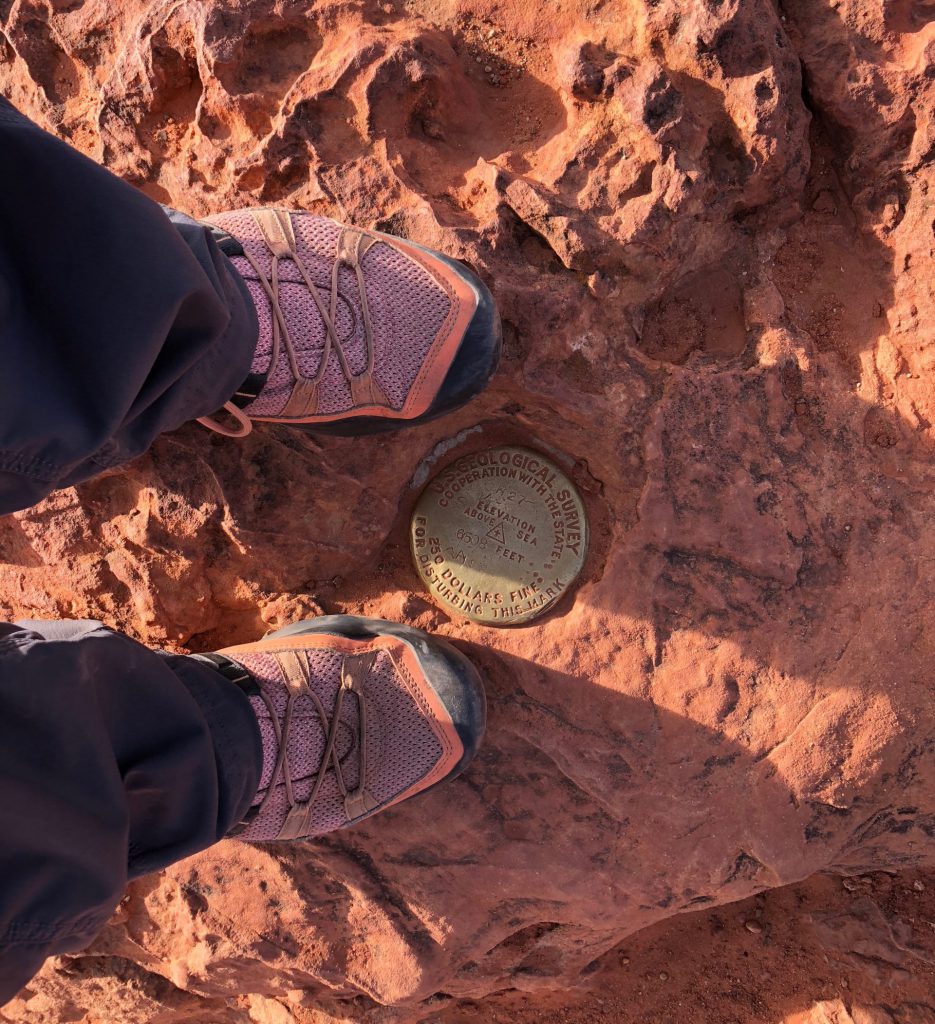 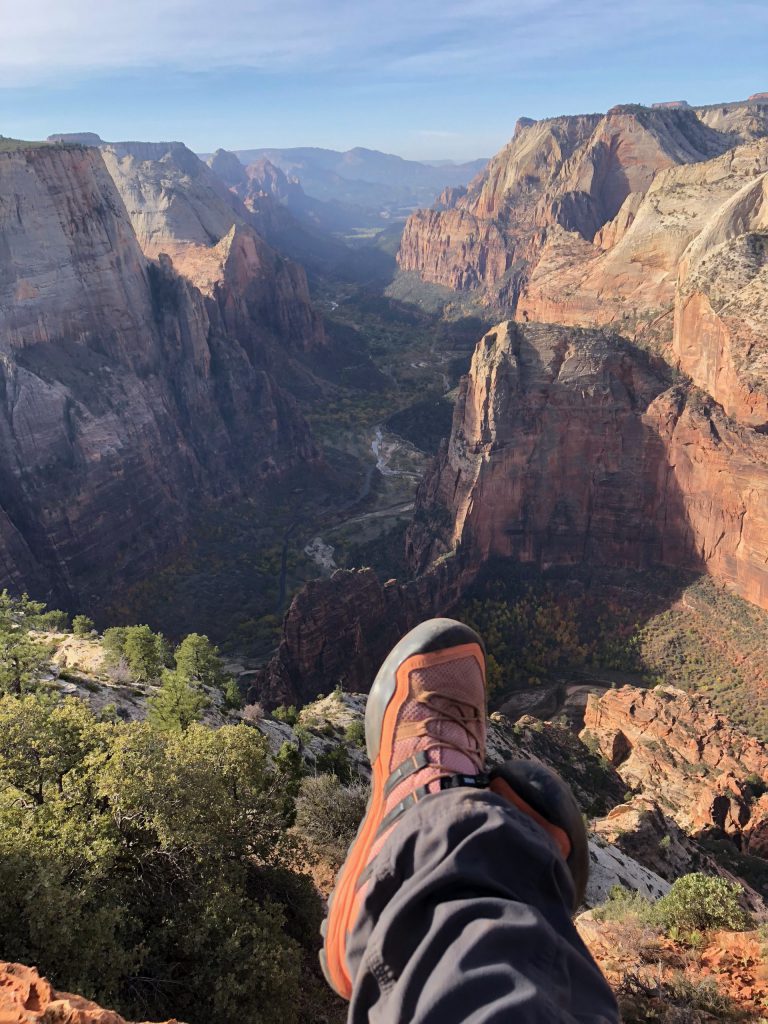 just another observation. that spot in the very middle of the pic is angel’s landing, a hike i did last year, and considered doing again, before deciding on this one. 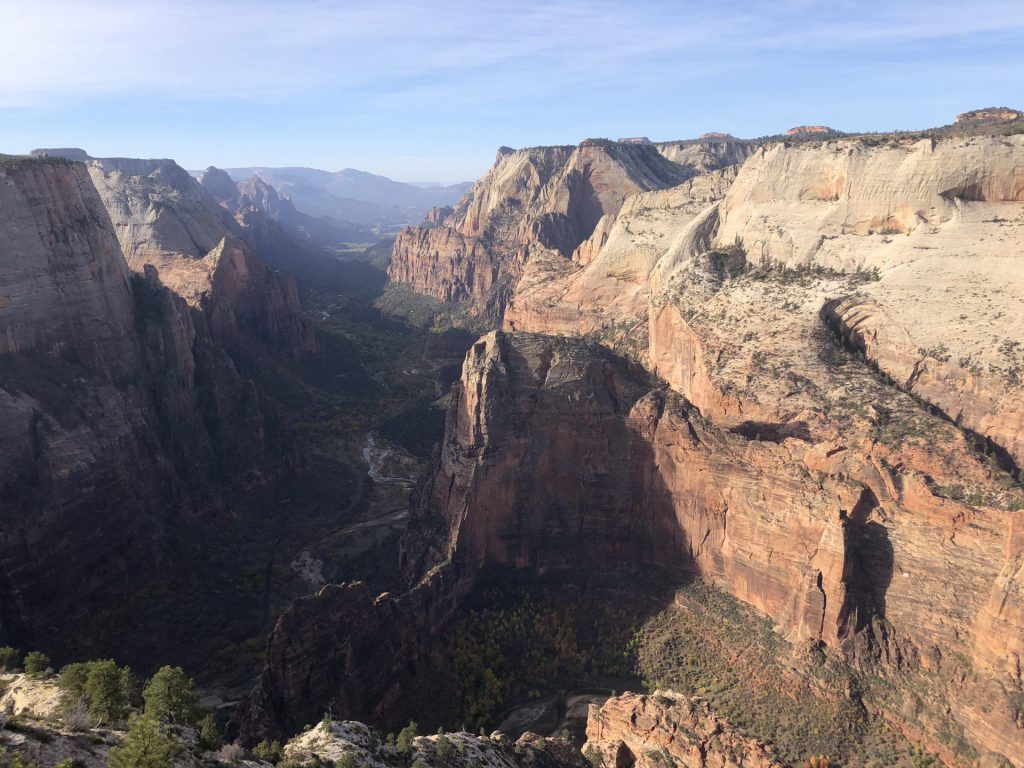 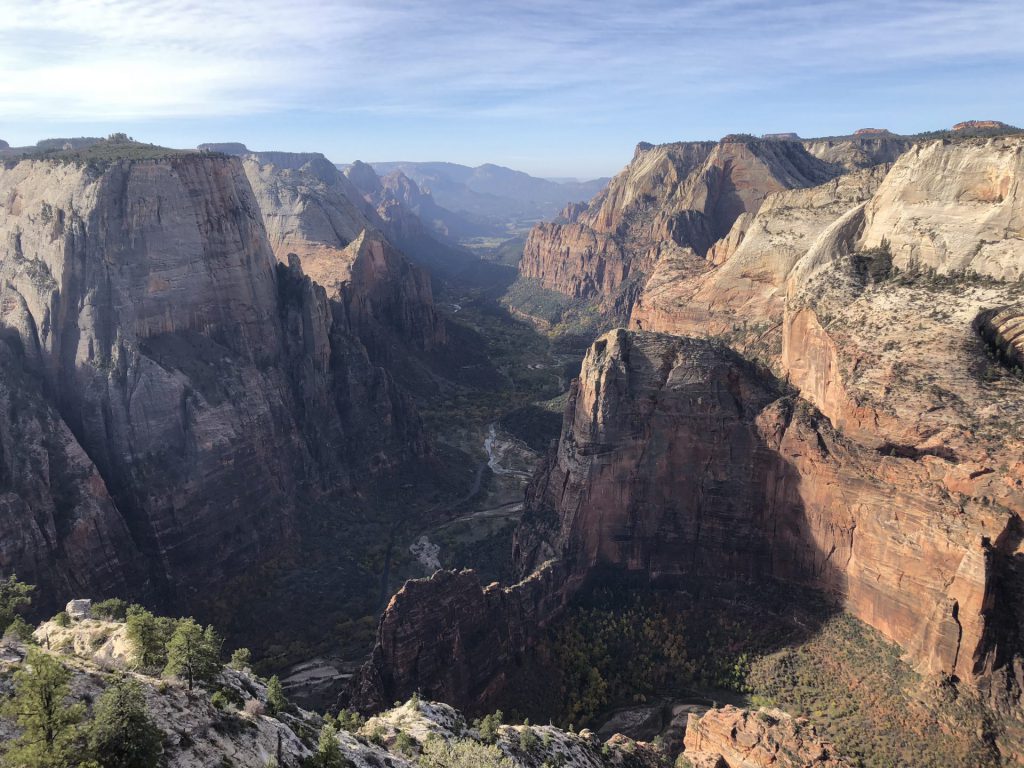 i exchanged a few more photos with my new friend (who was waiting for a crew of his who i had passed a LONG time ago on the trail). 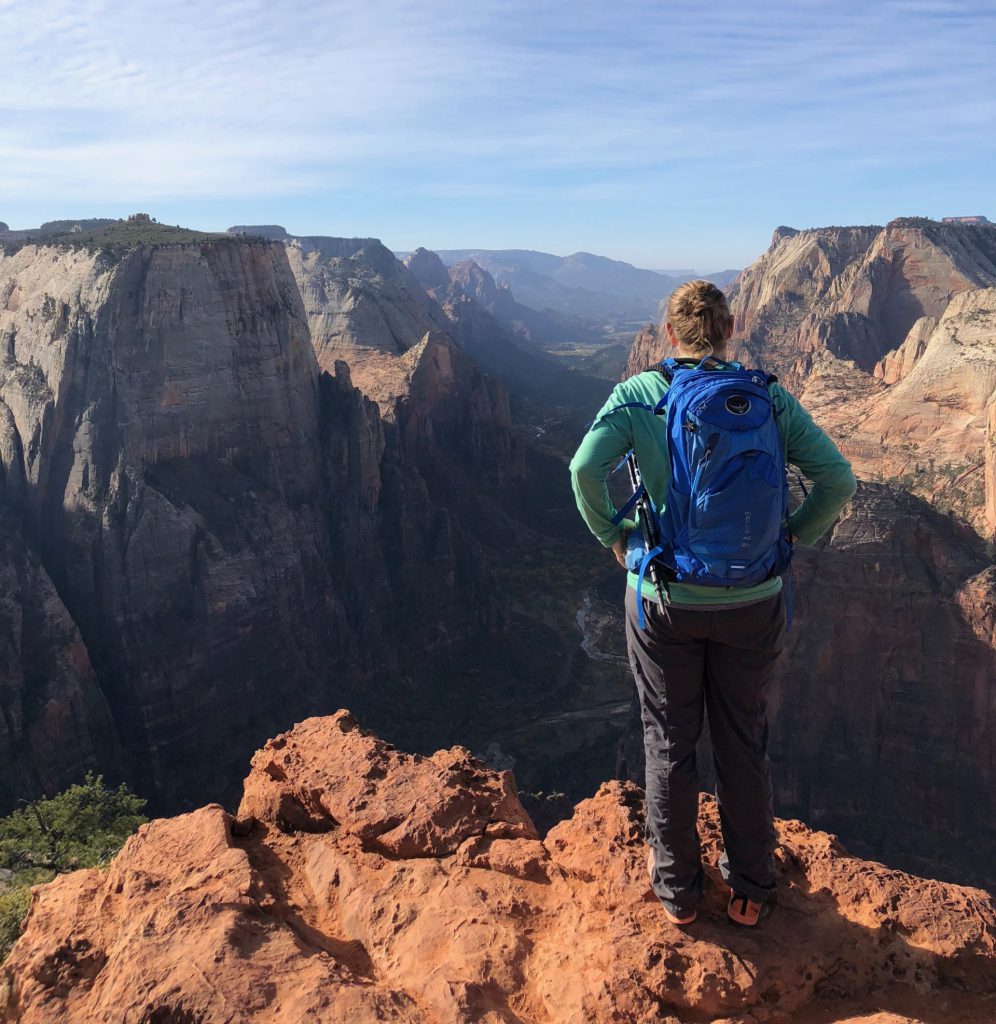 i’m basically dying i think. i was actually pretty pleased with myself. i passed several people and didn’t get passed by anyone. i made it up in under 2 hours and finished the whole hike in 3:30. 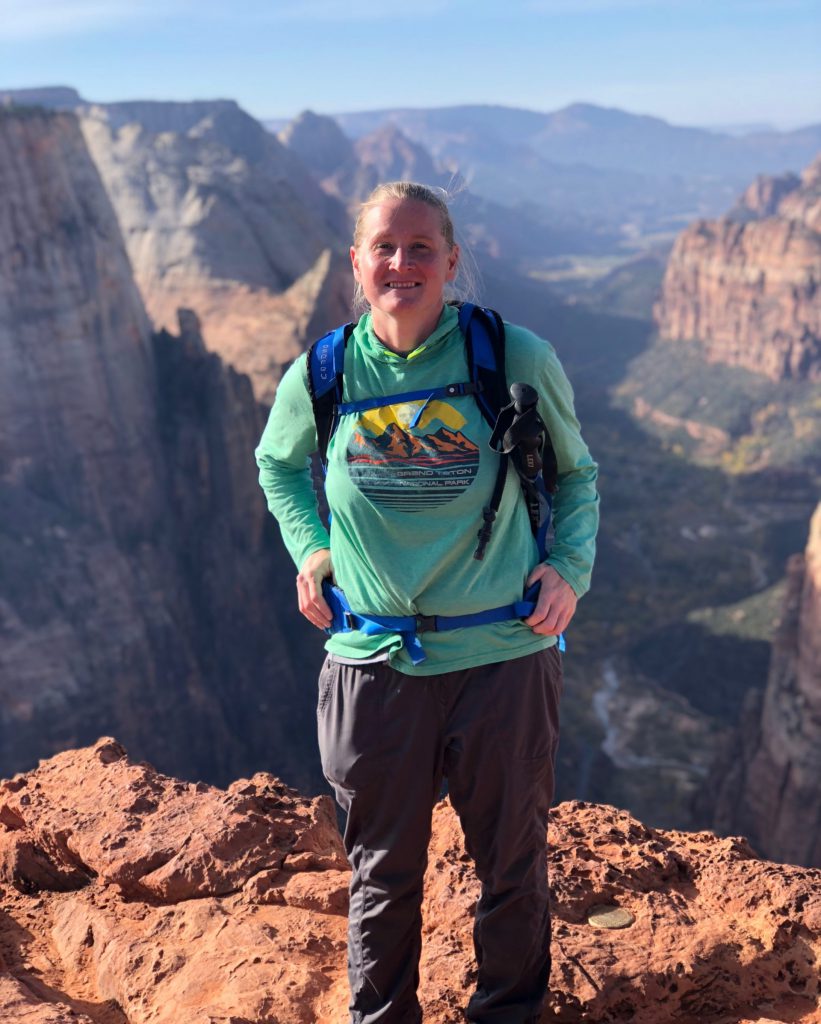 i had some snacks and then made my way back down…. 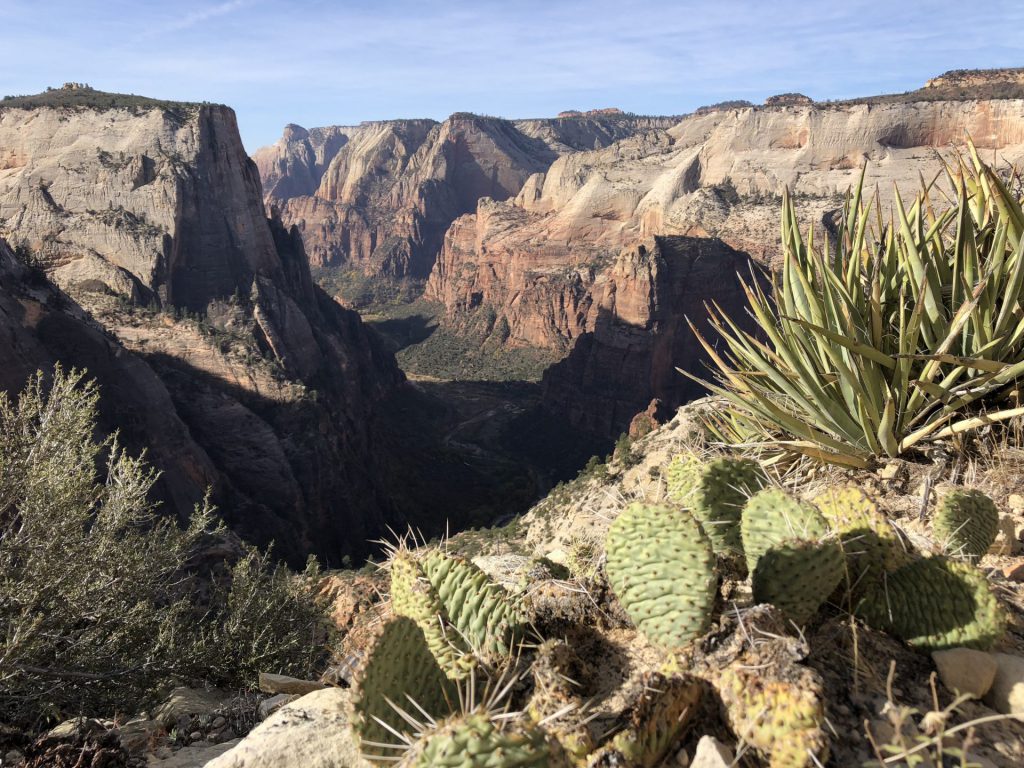 my old friend, the slot canyon from the other side. 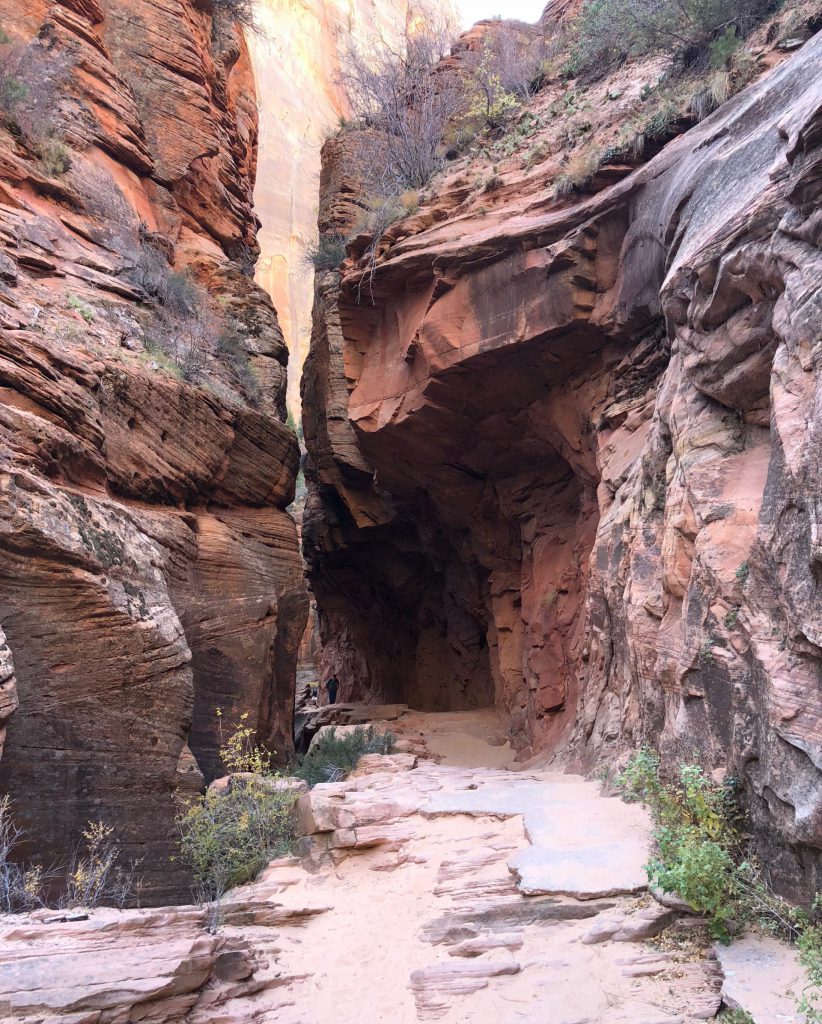 one final pic, a side by side from one year and one day ago, when i hiked angel’s landing. i intentionally wore the same outfit, to showcase my weight loss. at this point, there was probably about a 40 lb difference, thanks to the keto diet. 🙂 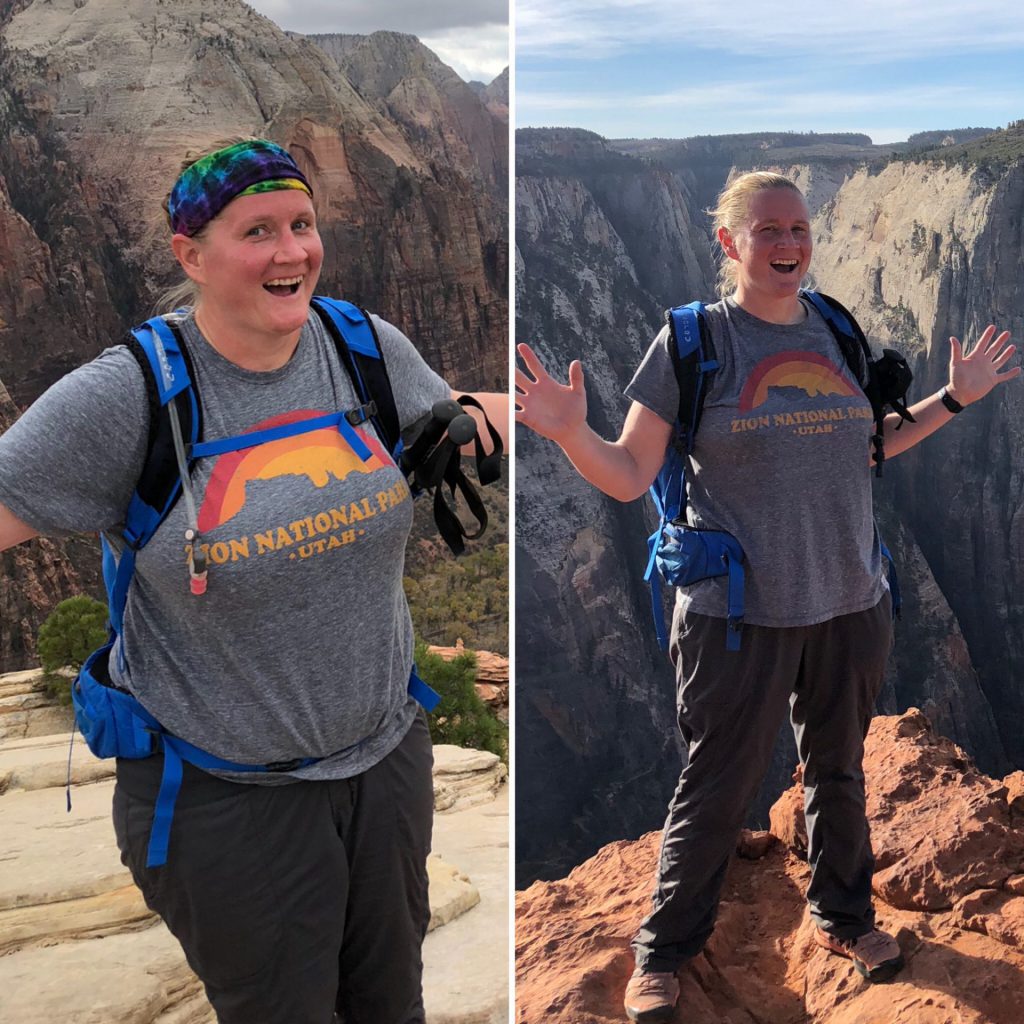 and that was my last hurrah. as i type this, we’ve been home for four weeks, not really doing much in the way of adventuring, and missing these red rocks and the desert.