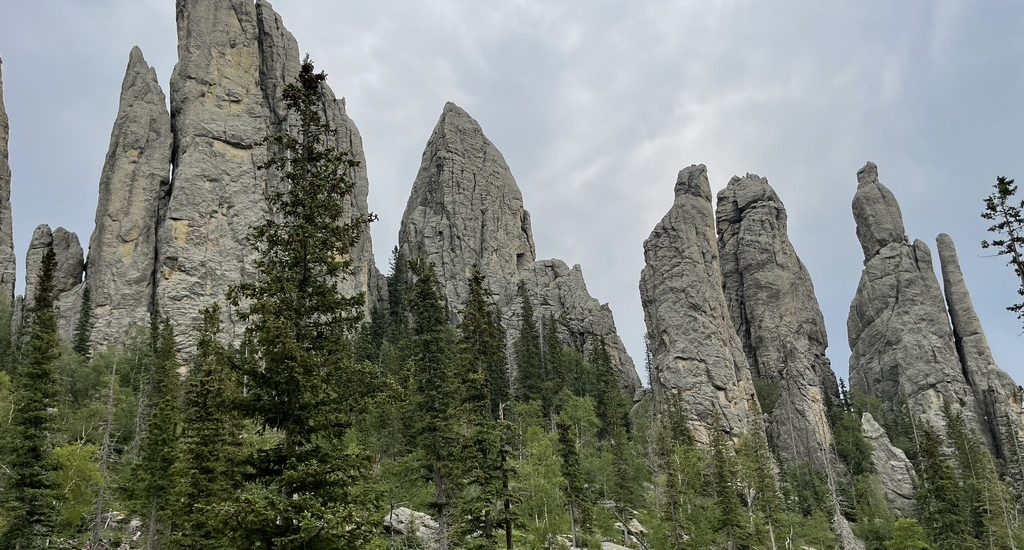 when we booked our time in custer, south dakota, i knew it was close to wind cave, badlands, and mount rushmore, but i had only vaguely heard of the black hills. despite its gloomy sounding name, it turns out, the black hills are completely amazing. we got a little taste of them on our drive to mount rushmore, but on our fourth day in the area, we set out to get the full experience.

on the way, we drove through hill city, home to the recently crowned worlds largest smokey the bear statue. obviously we had to stop.

we drove along the needles highway, which winds amongst the strange black hills rock formations. we stopped at one area where a tall, narrow rock juts into the sky, with a tiny sliver of a hole in it, giving the appearance of the eye of a needle. nearby, there was basically a boulder playground, so we climbed around for a bit, before loading back up and squeezing through a tiny tunnel to continue on.

for our official black hills expedition, we chose a very short, but steep hike to the cathedral spires. it was only 1.6 miles out and back, but with 500′ elevation gain, it was a nice little workout.

the views were lovely and we took lots of breaks, but pretty soon there was much grumbling.

with much cajoling, before too long we were in the middle of the catheral spires area. the aptly named spires towered all around us as we passed along the luscious green landscape. it felt like scotland meets another planet.

we had planned to spend a bit of time exploring, but it started to sprinkle a bit, so we took some mandatory family photos, and started to head back.

on the way back, we spotted a family of mountain goats on the side of a hill. we stood to watch them for a bit and attempted to zoom waaaaay in with our phones to get a good photo. there were two adults and two babies. it was a really cool wildlife sighting. then some other folks came along and trampled their way towards them and began calling them, so we took that as our sign to leave.

leisurely stroll out. this is right before derek sustained a random back injury slipping on some loose rocks.

we trudged on, derek uncomfortably shuffling behind us. back down all the up we had previously traversed. it was way less strenuous, but slightly more acrobatic, to go down.

we all survived. avoided the rain. all was good again in the world. also, can you see how happy ruby is to be able to go on adventures with us? she’s a state park loving doggo.

lots of beauty, both in the far away (and super tall) scenery, and the up close floral friends.

on the way back to camp, we stopped at a little fort type thing, related to the gold rush era. the clif’s notes (sarah’s notes) version is that we had given this land to natives. then gold was discovered. so lots of european settlers flooded the area illegally. so the us government set up a fort that half heartedly served to keep people away.

finally, later that evening, we completed our “custer state park” day with a drive around what is supposed to be a fantastic loop for wildlife viewing. we put the seats down in the sube, piled in with snacks and dogs and cameras, and set out to see all the wildlife.

and then we drove and drove and drove. and saw nothing. not a bison. i think a few prairie dogs. no deer. nothing. until we took a little detour down a side road, where we saw numerous pronghorn antelope. i think we saw at least six or seven different little gatherings of them. they were cool, and better than seeing nothing, but we were definitely a wee bit disappointed.

either way, it was a great day in custer state park. 🙂