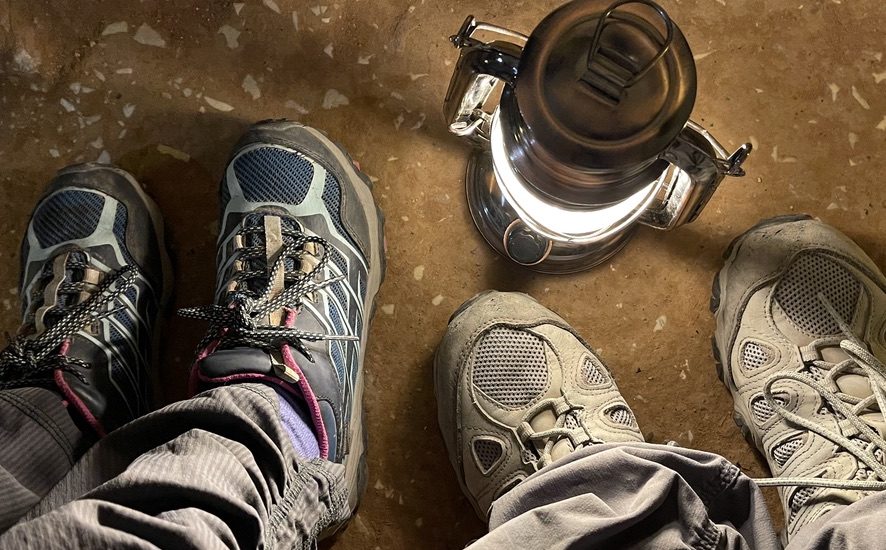 with all of our “must do” items in custer checked off, we had a few days left to fill with any bonus activities. anna and i had been scouting a 10-ish mile hike to black elk peak, so we got up bright and early on a very dismal and foggy morning and drove over to the trailhead. as we were unloading and getting ready for the hike, a ranger drove by and reminded us that half of the loop to the peak was closed, so we would have to do an out and back hike on the open part of the trail. we nodded that we knew about this, and then she told us that it was opening the next day and maybe if we came back then, we might have better weather and views from the peak.
anna and i reconvened and decided she was right. we drove back to custer and then made the spontaneous decision to drive out to jewel cave national monument to see if we could score tour tickets. (the method for ticketing was the same as wind cave). we were able to get a pair of tickets for a historic lantern tour at noon, and some tickets for derek and anna to come back later for an easier (back injury friendly) tour that evening.
we went back to camp to regroup and then back to the park for to meet up for our tour. it started at the original visitor center for the park, and then we hiked down to the cave entrance and the lantern tour began.

this cave was a bit more of a tight squeeze than any other we’ve been in (not counting the lava tubes with our friends in utah). there were a lot of steep, narrow, twisting, winding staircases and ladders. and it was very dark. so much more fun.

anna did a great job. but it was really hard to get good photos.

our ranger was so great. she knew so much information and definitely made the tour much more enjoyable.

jewel cave is named for the various calcite (and other? i don’t know) formations that adorn its walls. we only got to see this more chunky layered version, but deep in the cave system, there’s impossibly fragile and intricate structures, glimmering and shining and untouched. but, these chunky crystals were pretty rad too. and prolific.

at one point, our ranger put anna and i in the lead, and gave us a series of instructions and told us when to stop and wait for others. it was a strenuous section of climbing and we were pretty winded when we stopped, but we got to have a long break while everyone else caught up. but it was also super creepy, because other than our lantern light, it was pitch black.

we had a fantastic time on this tour. we agree that it’s one of the cooler things we’ve gotten to do in our travels. and as an added bonus, before we left the cave, a bat swooped through the room, giving us the full blown cave dwelling experience.

it flew by and before we knew it our time underground was up. we milled around outside for a bit, exchanging photos with some folks we met on the tour.

and then we hustled over to the visitor center so anna could get her badge and we could get the car back to derek so he could go on his tour. of course we had a few extra minutes for anna to practice squeezing through a tiny cave sized hole to see if she has a future as a spelunker.