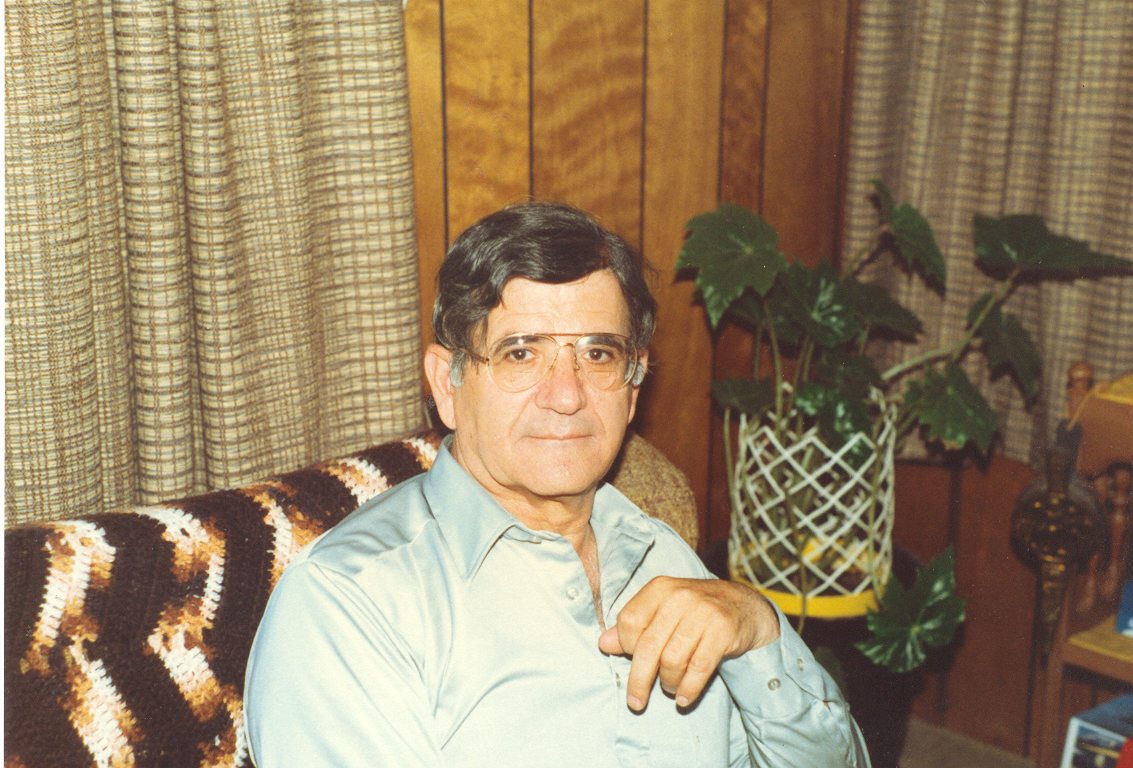 yesterday morning, i got a call from my dad in florida, telling me that my grampa had passed away.  he’s been battling alzheimers and other medical problems in these last few years, and had been in the icu for the last couple of weeks after a heart attack.  he never fully recovered.  thankfully he was alert and awake some of the time and all of his brothers and sisters and children got a chance to see him one last time.

i was hoping he’d recover from this and we would try to get down to see him one more time, knowing that his time was short.  unfortunately this never happened.  the last time i saw him was when isaac was 8 months old.  so about 3 years ago.

last night, while i lied in bed (wide awake, despite having the worst two nights of sleep of my life the previous nights), i began to think of all the memories i had with him.  at first, i thought, with him in florida for the last 20 or so years and me in ny and nc, i wasn’t going to be able to come up with many, but i was wrong.  there were so many.  so, excuse my poor writing skills, but i’m probably just going to blurb them all out in an english teacher’s worst nightmare.

growing up, he lived right down the street from me.  i vaguely remember sitting in the backroom of his house, coloring pictures that he brought home from work (xerox) that he had made for us on his fancy pants copy machine.  he was a big fan of crappy beer.  or at least that’s how i remember it.  he allowed me my first taste of beer when i was very young.  it was not good.  i swore it off for life.  or for a few years anyways.  :).  he had a nice little beer gut to go along with this habit.  he swore it was muscle and he was able to tighten it up and make it rock hard to prove his point to his unbelieving audience of grandchildren.

whenever we got cuts, he insisted on putting iodine or some orange-y, stinging medication on our wounds.  i’m not sure if he really thought it would help or if it was just a deterrent to our whining.

being 100% italian, made for gramps being quite covered in body hair.  he also loved to walk around shirtless.  we called him gorilla gramps among other hairy monikers.  for most of my childhood, i also called him “peter grampa”, to distinguish from my other grampa.  (note: i also called my gramma, his wife, “peter gramma”).

he was always preaching the value of money and investing to us.  and books.  and learning.  and school.  he gave us a dollar for every A we could produce on our report card.  🙂

ever since i can remember, he’s worn hearing aids and has had terrible hearing.  and selective hearing.  :).  we were always yelling things at him.  repeating things.  making grand arm gestures to explain.  he would eventually just learn to nod, even if he didn’t understand, so that we stop yelling and dancing.  🙂

he had the best voice.  it sounded like moose from noggin/nick junior.  so soothing.  🙂

he was always willing to load up a car full of my cousins and take us to mumford museum.  more commonly known as genesee country museum.  i think he had like a giant family pass that never expired.  we went all the time.  he would pop the trunk and load us up with trucker hats and sunblock.  he was very insistent that we were not going to get skin cancer.  when we left, he always bought us an old timey gift from the store.  i vividly recall some confederate money that was my pride and joy at a young age.

at some point in my childhood, they did what most yankees do and decided to split time between florida and new york.  in the summers, they would come up and stay in a camper at skyline campground.  i actually have no idea where skyline campground is.  it’s like a mythical place somewhere 10 or 15 minutes from where i lived.  i like  it that way.  we would go out there for a day or the weekend, depending on how many kids were there and just play and play.

then, one summer, they stopped coming up and made florida their permanent home.  this was ok, though, because my dad was there too and i went down every summer for a few weeks or so and got to see them then.  one summer, i remember sitting on the floor, playing cards and board games with my cousins, listening to tapes of irish drinking music that my gramps played.  we giggled and sang, giggled and sang.  he enjoyed it as much as we did.  when i got back home to ny, he mailed me a dubbed tape of the songs.  the best part was, he didn’t use a recordable cassette, he just picked an unwanted one from his collection and scotch taped over the little holes to make it recordable again and put the irish music over that.

one summer, i learned that the salvador dali (artist) museum was in saint petersburg.  i told my gramps i was interested.  despite the high cost of tickets, he took me and let me walk around and look at all the creepy art.  he loved learning.  and loved that i wanted to learn.

at some point in all of this, he bought a library of books.  literally.  i think a library was closing or something and he bought a room full of books.  literally.  the walls were covered in shelves and the entire room, from floor to ceiling was books.  everytime we would go there, he would let me pick one out to take home.  there were lots of books about wars and art.  that’s all i remember.  i wonder what ever happened to them all.

my gramps and gramma were always at each other’s throats.  in a good way.  i think.  well, i hope.  i remember one day, she was nagging at him (i know it was nagging, because he told us grandkids).  as he stormed out the door, he yelled back, “ok RUTH!!”.  ruth was the name of my gramma’s mom.  his mother-in-law.  i hardly knew her, except that when we went to her house we had to stay in one room and she was really scary.  so, this obviously struck all of us as hi-lar-i-ous.  gramma.  not so much.  🙂

after i got to be about 14 or 15, i stopped going to florida in the summer.  when i got to college, he insisted on paying for our books.  all of the 10 grandchildren had this offer on the table.  even when i got a small scholarship that paid for my books, he insisted that i still send the receipt and he’d reimburse me.  sweet.  considering i was totally broke in college.

after i graduated, he was so proud of me.  consumed with my career and how much money i made.  how successful i would be.  cute.  then i quit it all to be a teacher.  he was still proud. kind of.  then, i became a stay at home mom.  i’m not sure he ever knew about that.  it’s probably a good thing.  🙂

around the big boom of the internet, my gramps began to dabble in cyberspace.  this would not be good.  everyday i received 10 or so email forwards.  he typed me emails of continuous non-sensical punctuationless craziness.  then, he would eventually get crazy viruses.  and i would get lots of spam.  he would call and ask me for help, because his computer would lock up all the time.  he couldn’t print.  he couldn’t close windows.  etcetera.  after i married derek, we made a road trip down and derek did his very best to clean up the computer and write him detailed instructions on how to do the 3 or 4 things he was trying to do.  gramps was so excited.  he tried to give derek $200.  🙂

well, that’s about all of my memory dump.

i’ll end on this.  the best part of my gramps.  he started losing his hair when he was like 13 or something.  ok.  not really.  maybe late twenties though.  he opted to go with a hair piece.  growing up, i never noticed.  i thought his perfectly swooping to the side, salt-and-pepper hair was his own.  i never noticed that it was slightly askew when he put on his trucker hat.  or that as he got older, the hair around the edges got lighter and thinner.  finally, rumors started spreading among the cousins and someone let me in on the secret.  ahhhh! it all made sense, but we were NOT to talk about it with my gramps.  so, we stood by as his hair piece got more and more crooked. his real hair thinner and thinner.  one day, he sat me down, and very seriously informed me that he wore one.  i kept a straight face, pretending that this was the first i had heard of such things.  towards the end, i saw a picture of him on facebook and my cousin’s wedding, and i guess he finally gave up and went sans fake hair. but more noticeable in the picture was how old he looked all of a sudden.  small.  frail.  tired.  old.  (bald).  i knew his time was short.  and i was sad.  i will miss him.  i miss the memories.  i guess that’s how it goes. 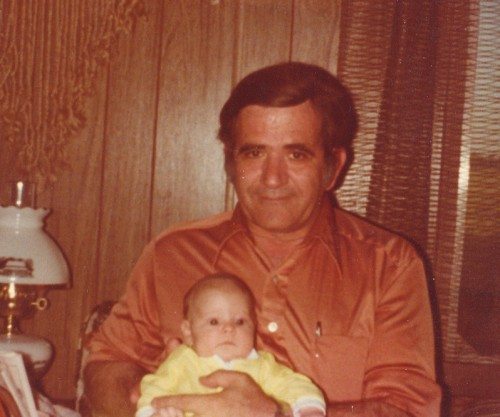 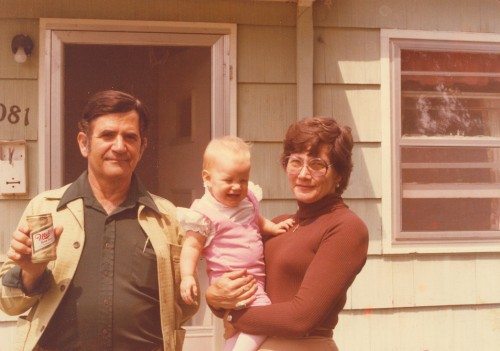 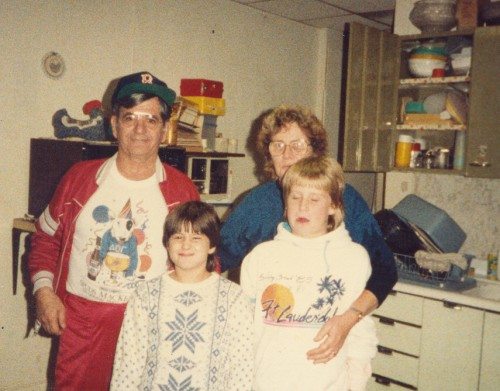 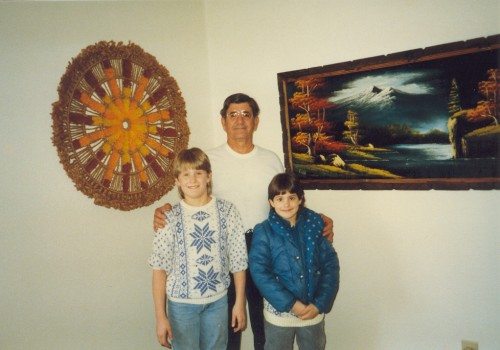 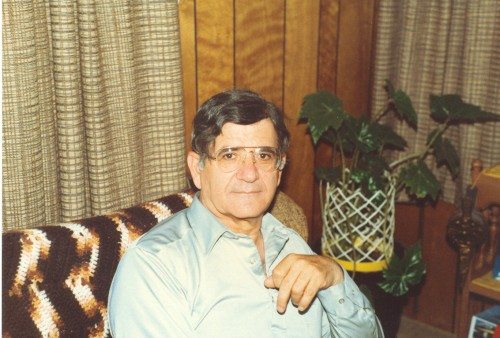