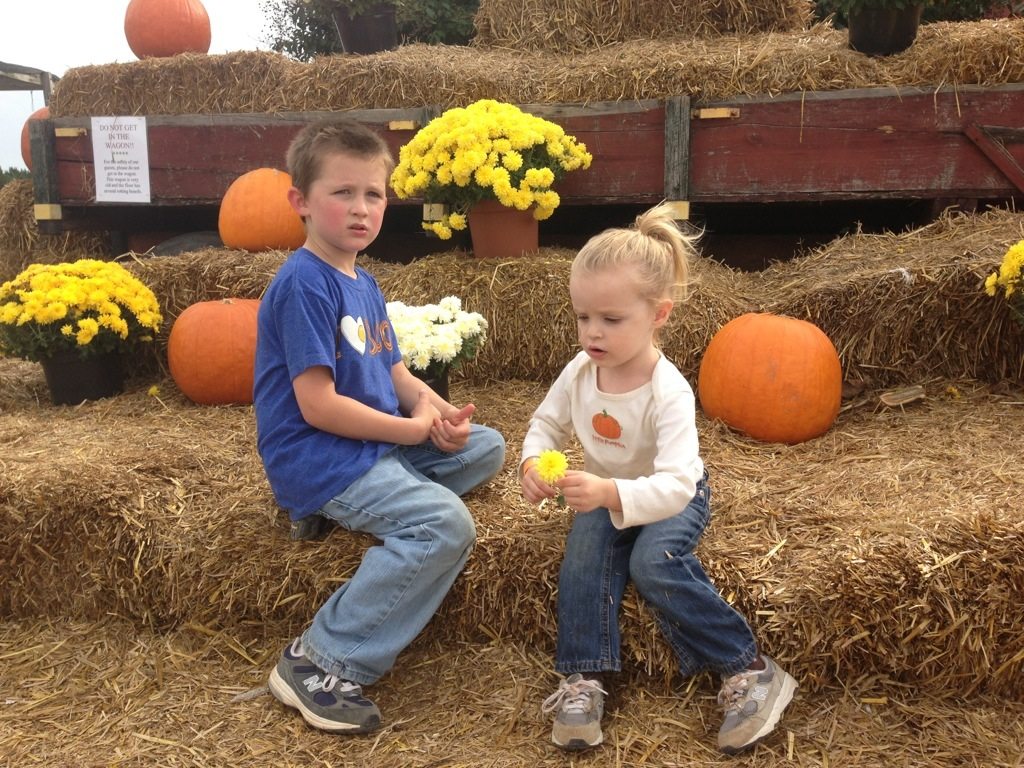 yesterday, we made our annual-ish trip to patterson farms for some fall time fun. and i took exactly one jillion pictures to document it.

last year, the eating situation was disastrous. we waited in line for like an hour for some terrible hot dogs and hamburgers. so, we decided to eat on the way this time and spare ourselves. so, we stopped at a barbecue place in davie county. with a big pig sign.

when we arrived, we immediately began perusing the winter squash collection.

of course, we used the autumn props to try to get a cute pic of both kids. and ended up with this:

after we had paid, but before we made it to the gate, we were suckered into forking over more cash to ride the cow train. it was actually super cute and the kids loved it.

apparently something was funny.

finally, we made it to the entrance. but first, some quick obligatory pics with the creepy pumpkin growth chart.

first up, the petting/feeding zoo.

then, face painting. isaac wanted nothing to do with it. anna, however, was a quite willing participant. she sat completely still while our face painting associate decorated her with some fall fashion.

a pumpkin of course!

after anna was so heroic in her face painting efforts, isaac agreed that a hand painting would be acceptable and this ghost was applied.

the thing the kids talked about the most on the way was the corn pit. every time we stopped for something else, there was a bit of grumbling that we weren’t at the corn pit yet. so, finally, we went…

it did not disappoint.

we brought home approximately 50 corn kernels in our clothing. i just found some in the laundry this morning.

i was even allowed to get in on the action.

this year, they added a corn maze. a maize maze. ha! i’m lame, i know. anyhooooo, it was an extra $4 a person, so ike and i went alone, figuring anna would not be impressed. it took about 15 minutes to complete, using checkpoints and a passport with questions helping us to navigate. it was fun. once.

then, some playing. first, the horse tire swing.

and an exceptionally cute boy if i do say so myself.

the monkey girl on the ark.

back to the entrance. pumpkin discussions.

isaac pushed anna down and she bumped her head. so, he had a bit of a timeout. when he returned, we tried for a cute picture, which, as you can see, would not be happening.

so, we bought some (an extra large bag) kettle corn and left.