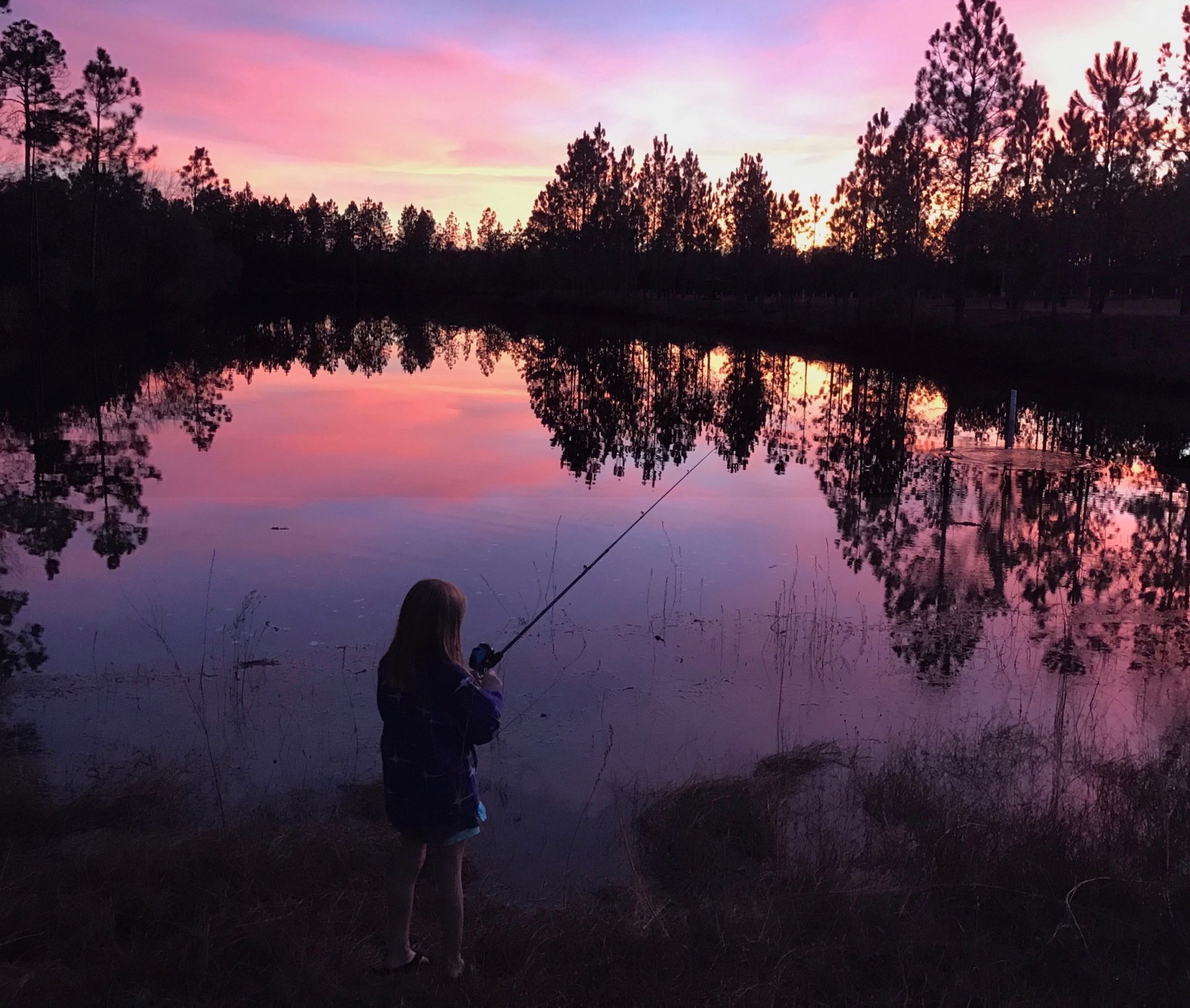 so, i left off with our crew heading to jacksonville, florida to retrieve our camper. the long days of traveling have been rough on hazel. she made it all the way to jacksonville, but fell asleep on the three minute drive from the rv storage place to the walmart parking lot, where we planned to spend the night. (i transferred her from a safe carseat to the couch, if there’s any concerned child car safety experts out there). 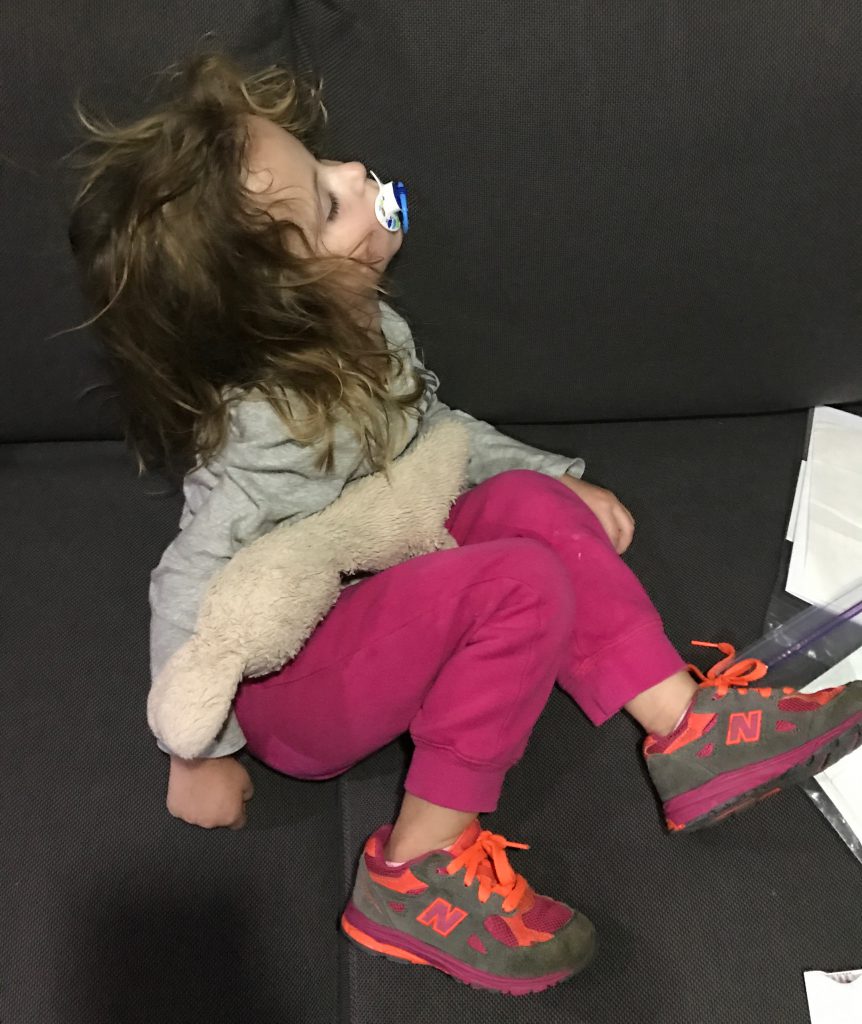 it wasn’t as warm as i would have preferred it, being florida and all, but it’s still a very nice change of scenery from blustery gray western new york. 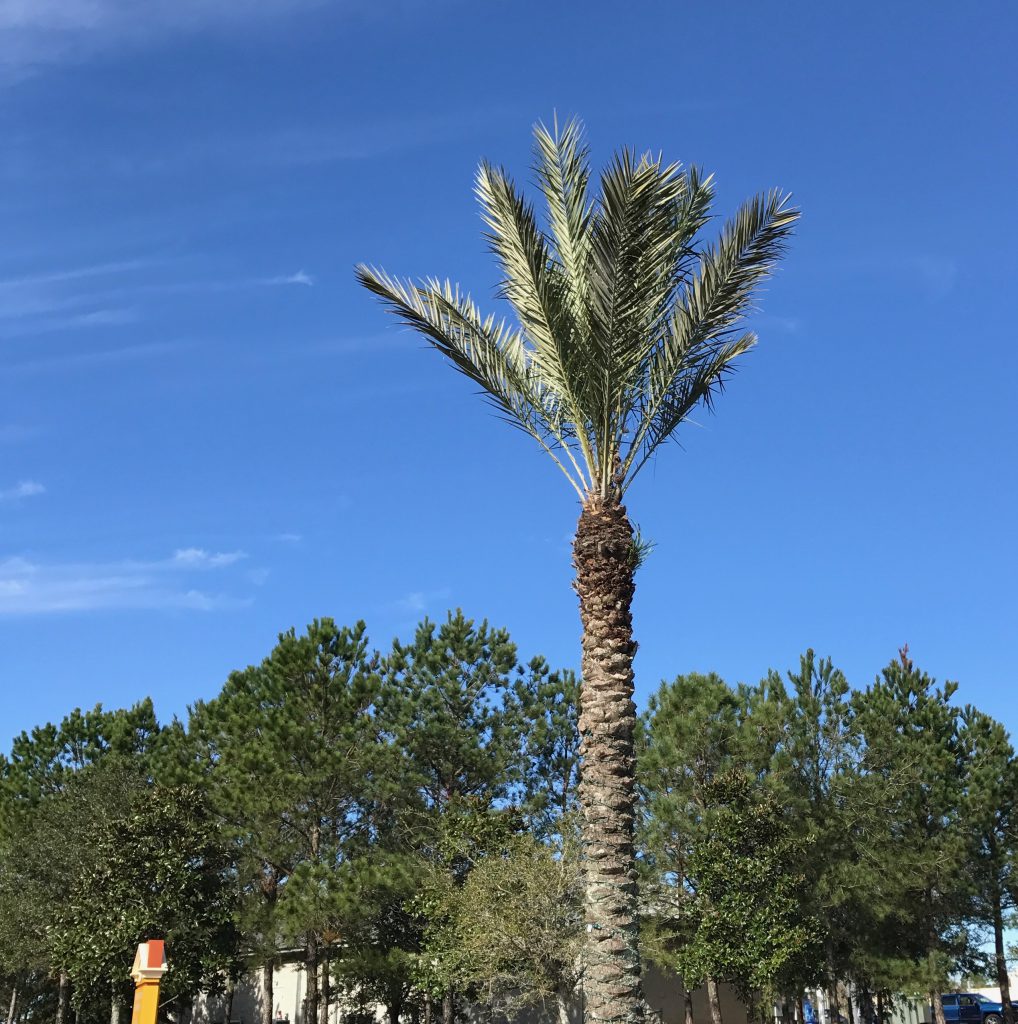 the next morning, i hit up the florida dmv (tax collector) along with 50 or so of my closest fellow floridians. i got my florida driver’s license, completing our family’s “move” to florida. 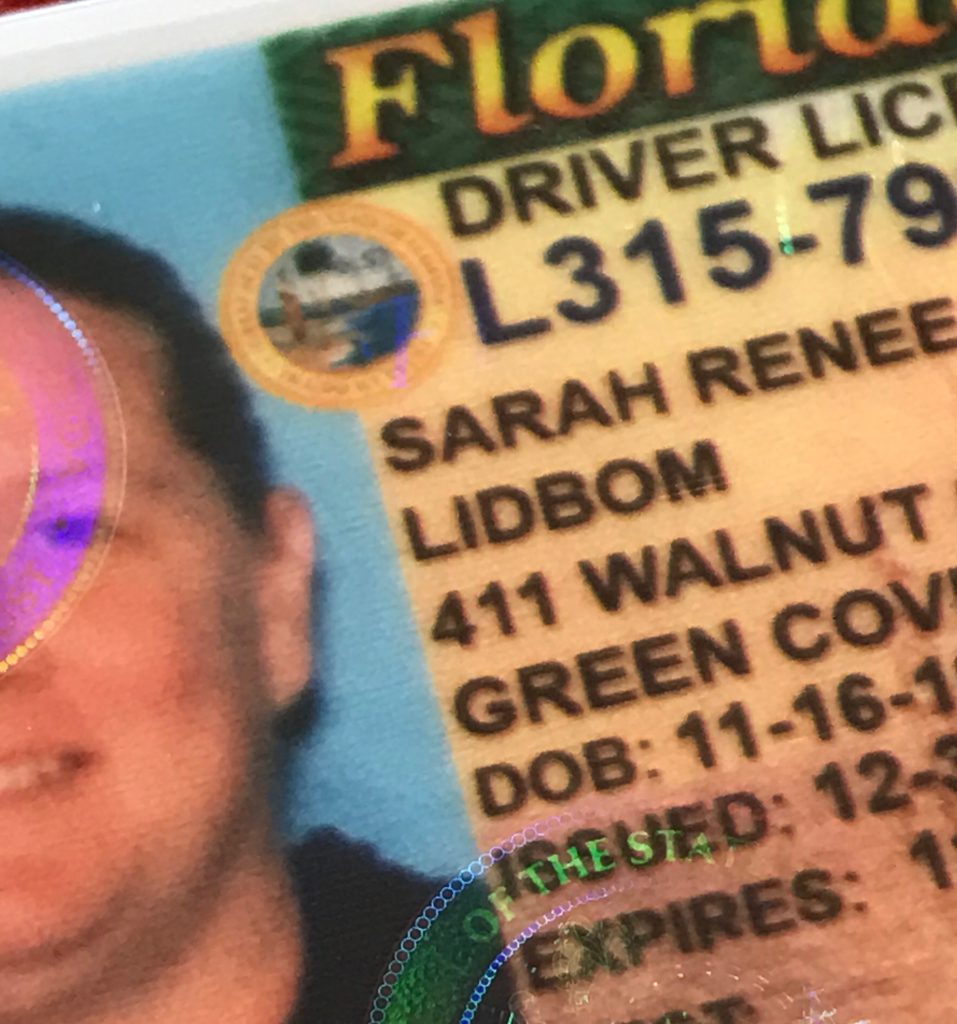 after we completed our transition to floridians, we began our (slow) trek west. somehow, we managed to get a good hour and a half ahead of derek, so we detoured for a nice long lunch at a local mexican establishment. we love mexican. 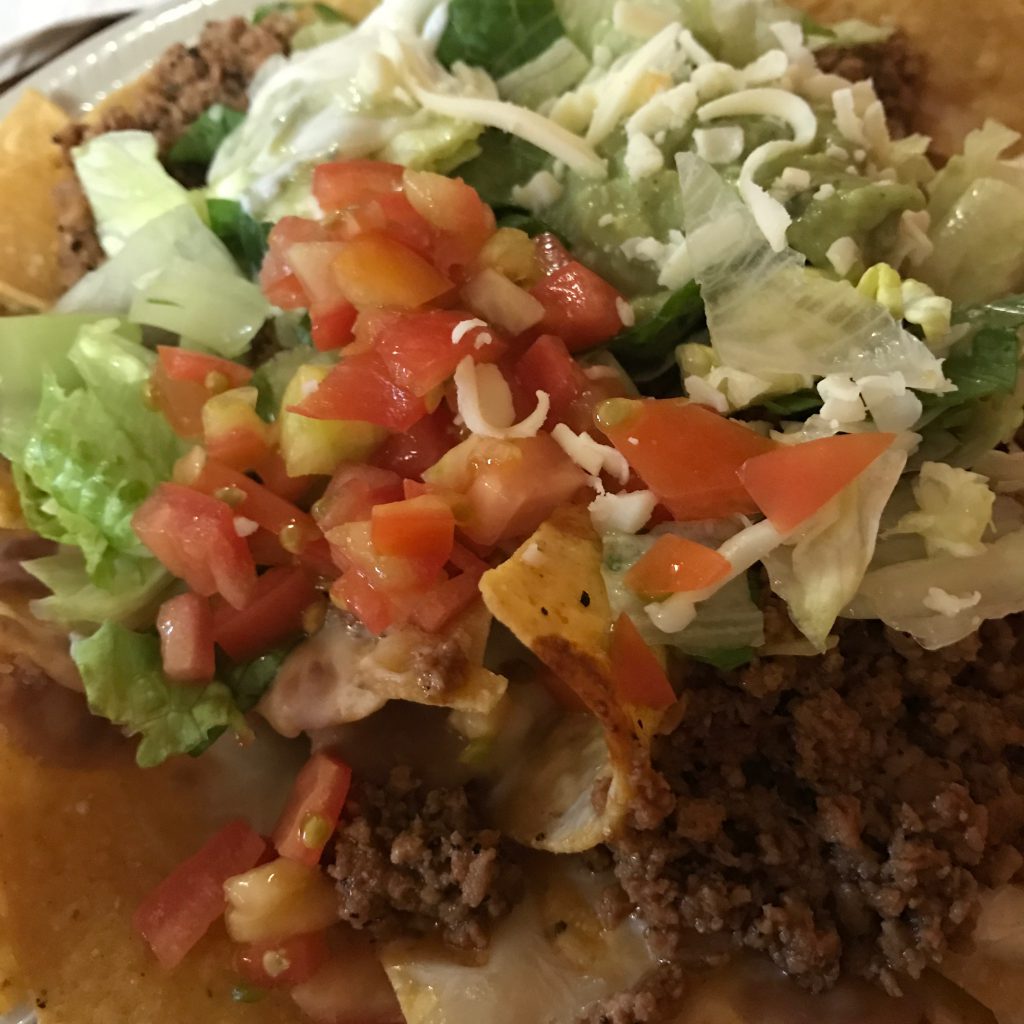 we also detoured into tallahassee, to check out a state capitol building for our collection. we parked and found our way to the front of the building, only to learn that this is the old building and is now a museum. so, we took an obligatory pic and then walked through the back door to the back of the new capitol building. 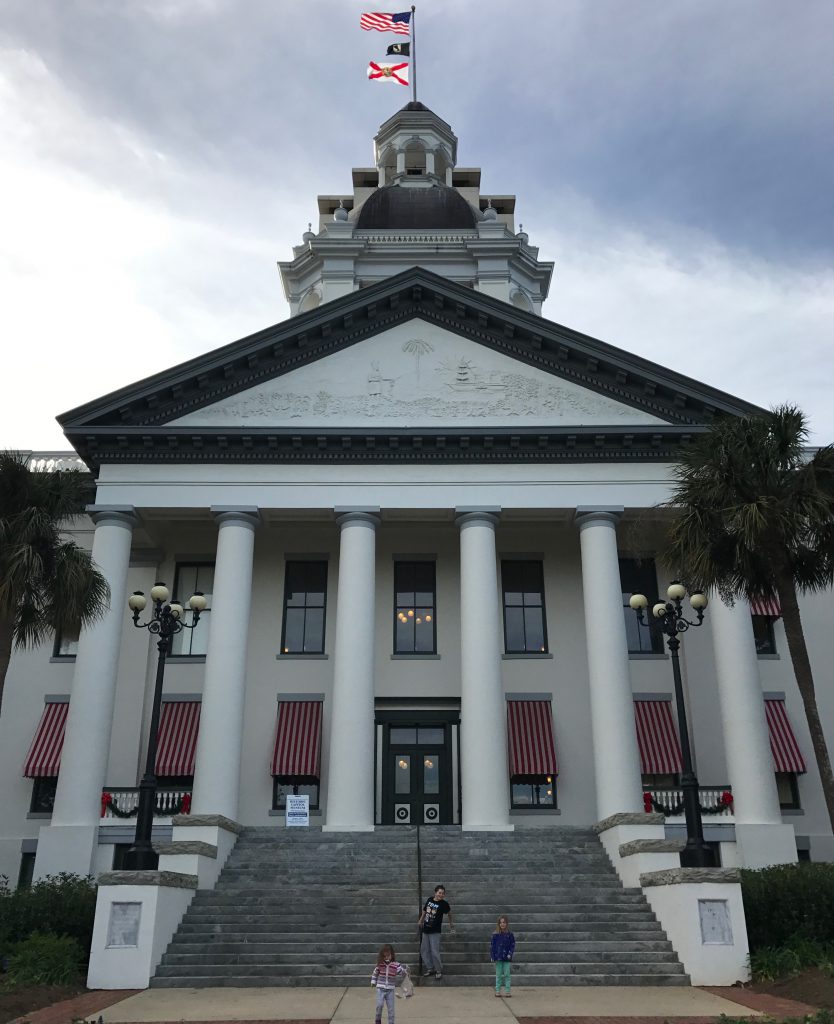 we went through security and rode the elevator up 22 floors to the top, where you can observe tallahassee from all sides. 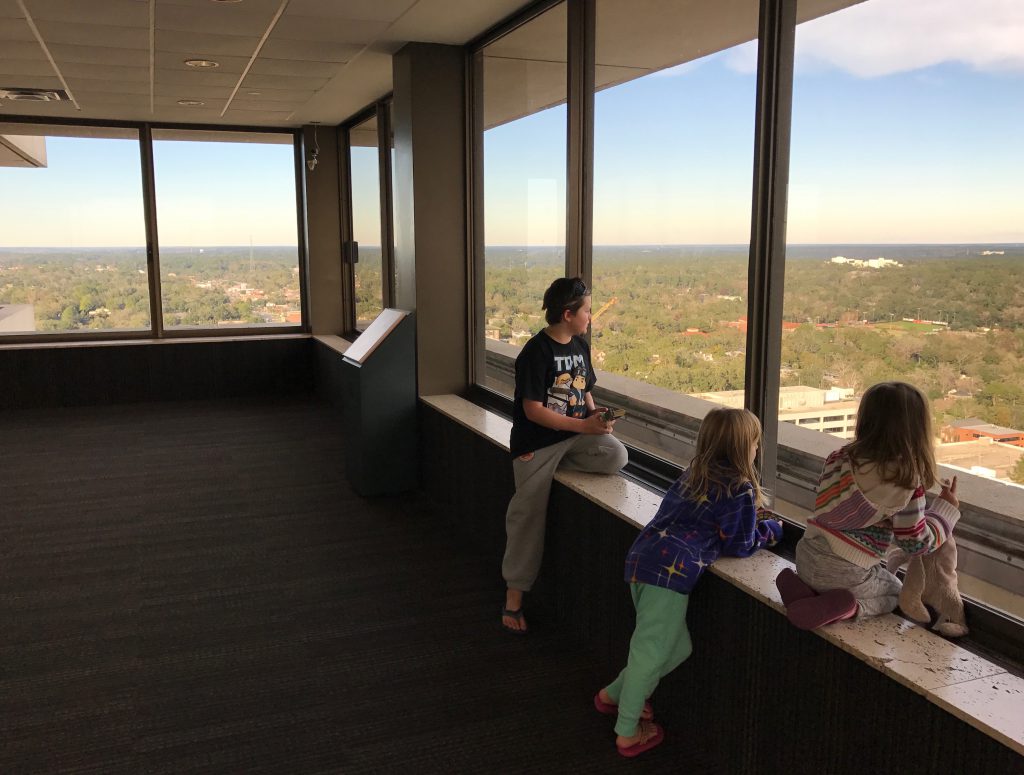 then, out the front door for some pics of the actual capitol, which is decidedly different that all of the other buildings we have visited. less cool architexture, for sure. but, a nifty dolphin statue and fountain. 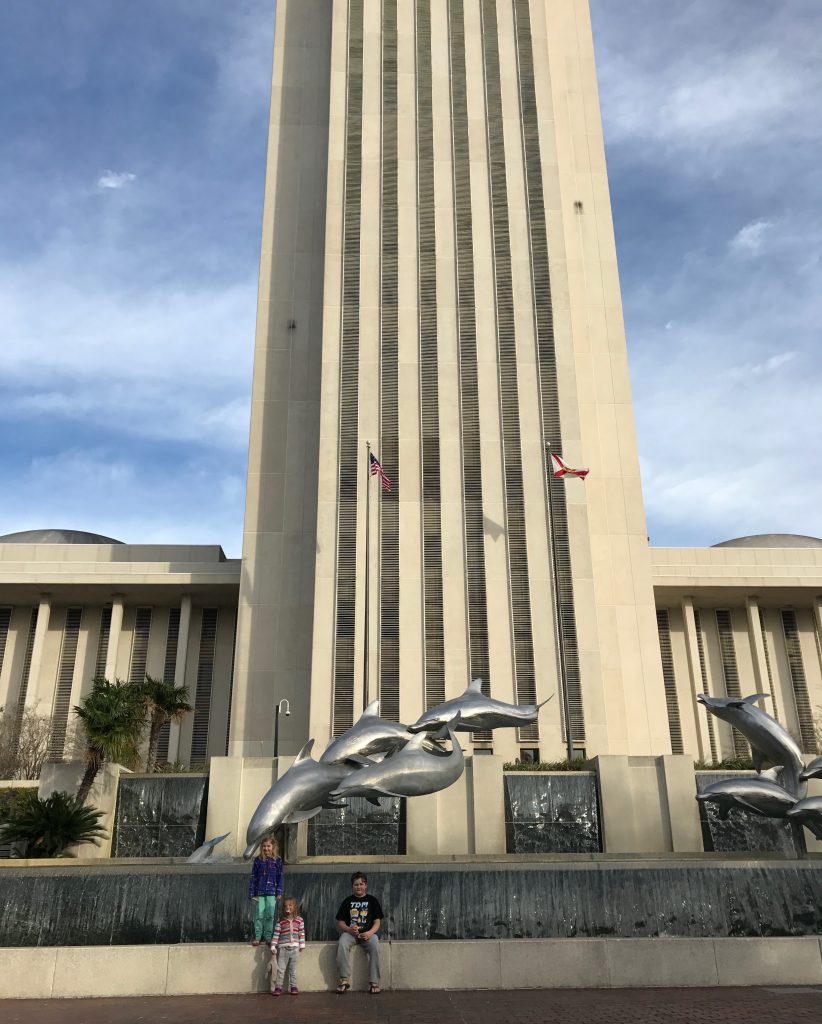 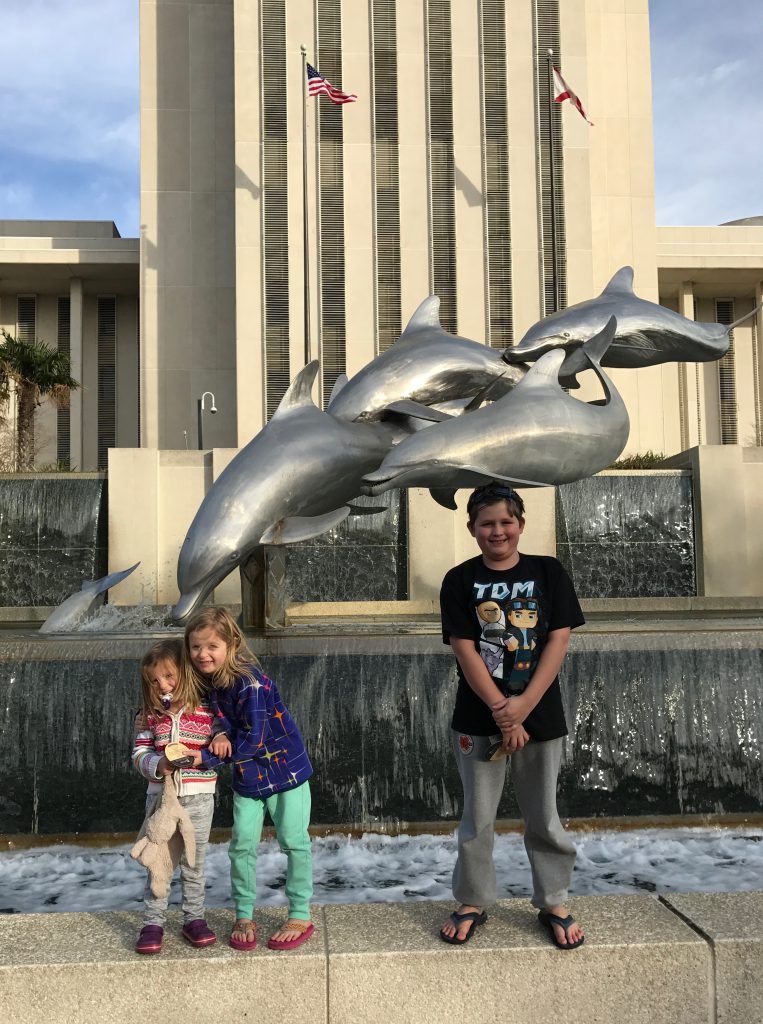 finally, we arrived in fountain, florida, our home for the week. it’s between pensacola and tallahassee, about an hour north of panama city. mostly, it’s in the midde of nowhere. we settled in and the next day (new years eve day), the big kids finally got to tear into their new christmas lego sets… 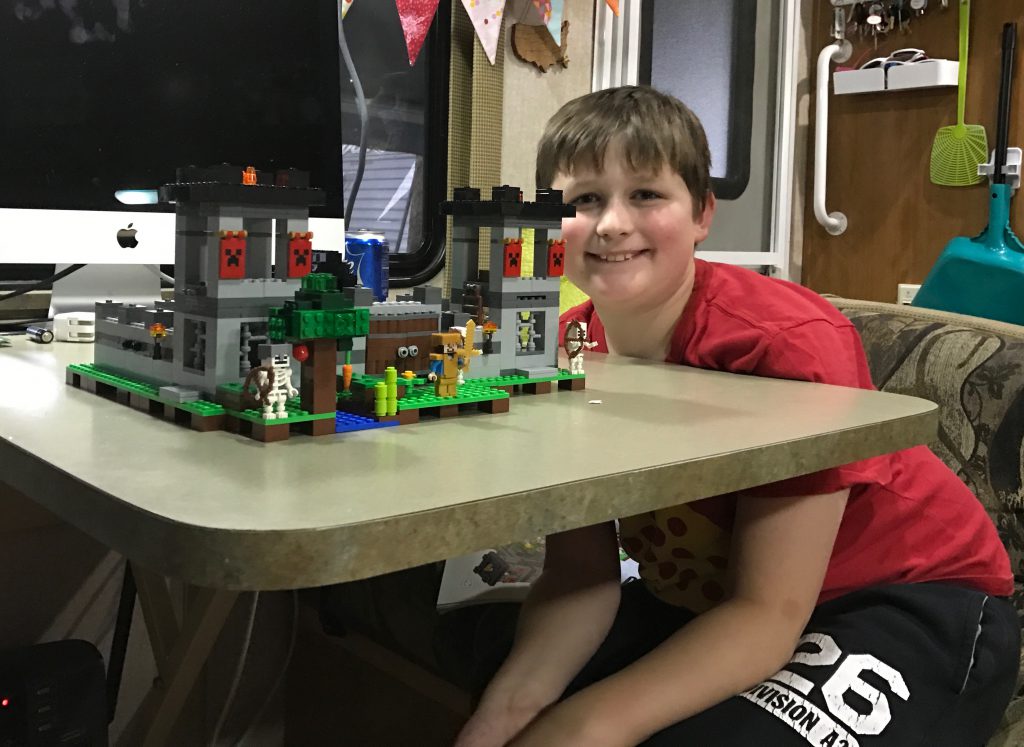 our new years eve “party” was pretty uneventful. derek went to the closest grocery store option – a piggly wiggly express – and got us some random junk food. we are actually in a new time zone, so our internal clocks are completely bonkers, but the kids and derek stayed up until 11 central/12 eastern, but hazel and i were done by 9. 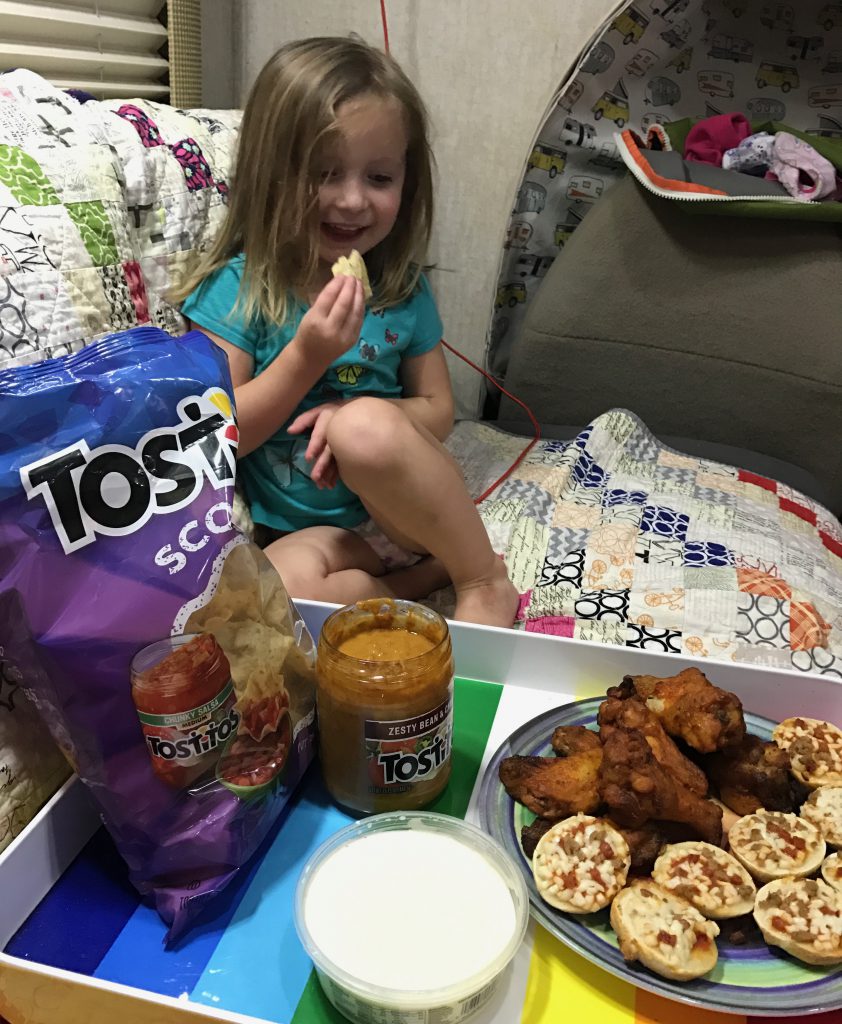 i was worried that our limited space would make it hard for hazel to play with her trains. but, she’s cool with it. we just have to make sure there’s no tall structures near the bathroom door. 🙂 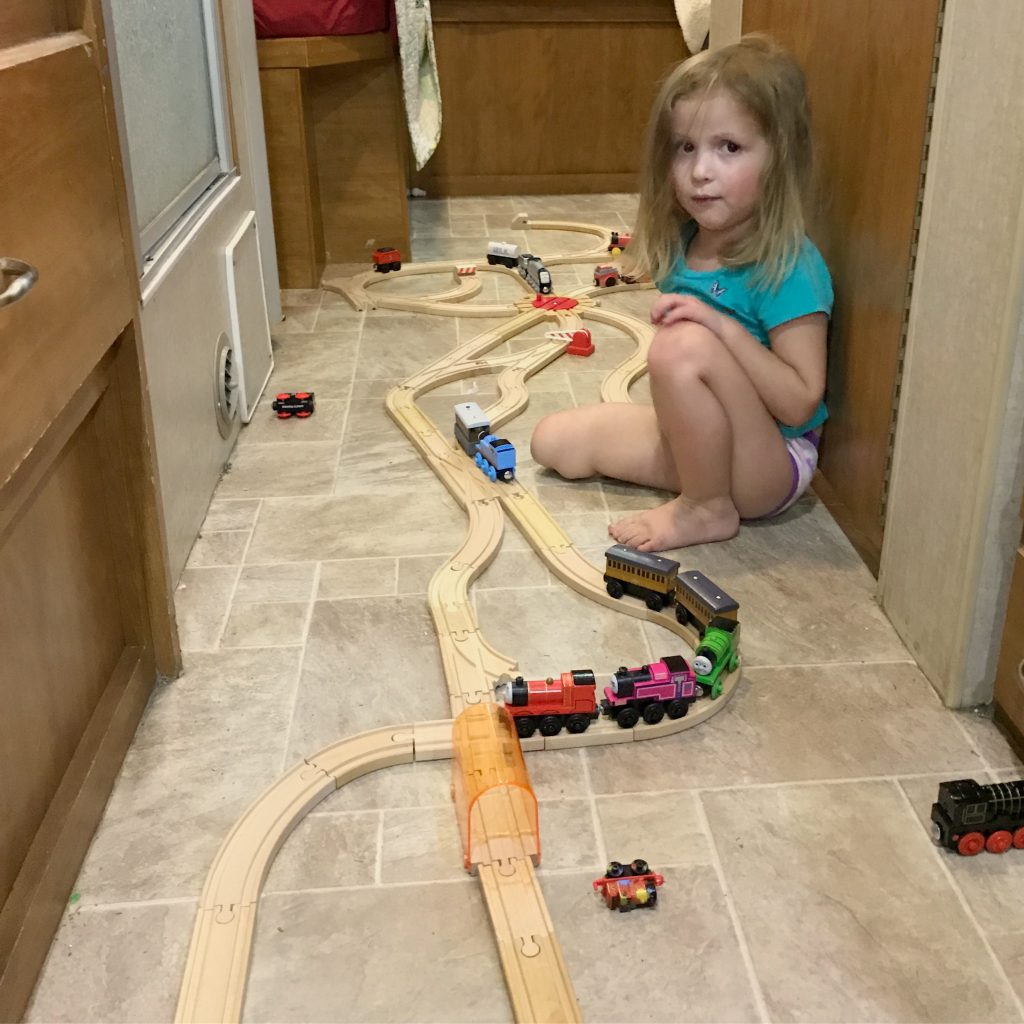 a completely insane thunderstorm rolled through one night. thankfully, there was no damage. 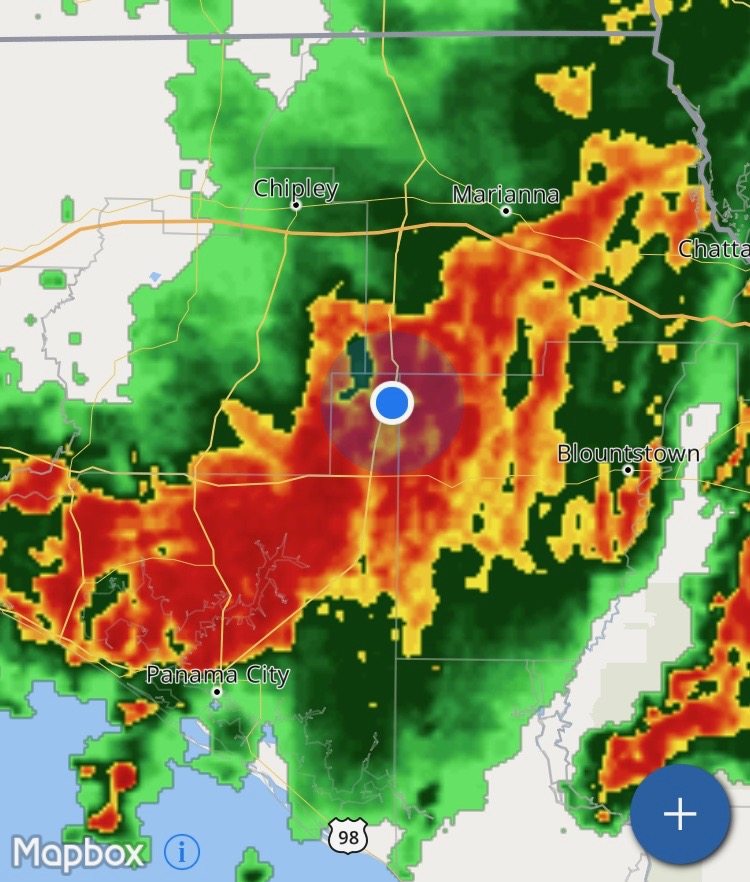 and then, we began school. backstory. we have been unschooling. which is basically trying to “learn from life”. but, there have been some significant behavioral issues emerging in one of the lidkids, so we decided that a bit of structure was necessary. so, we started doing a few things online and trying to establish a bit of a routine. but, the self-directed thing wasn’t working great either. a lot of frustration and whining. so, i caved and bought a few curriculum items. i was nervous about how things would go on our official “start” day, but i couldn’t have been more surprised. both kids knocked out their work and then had a great rest of the day (mostly). 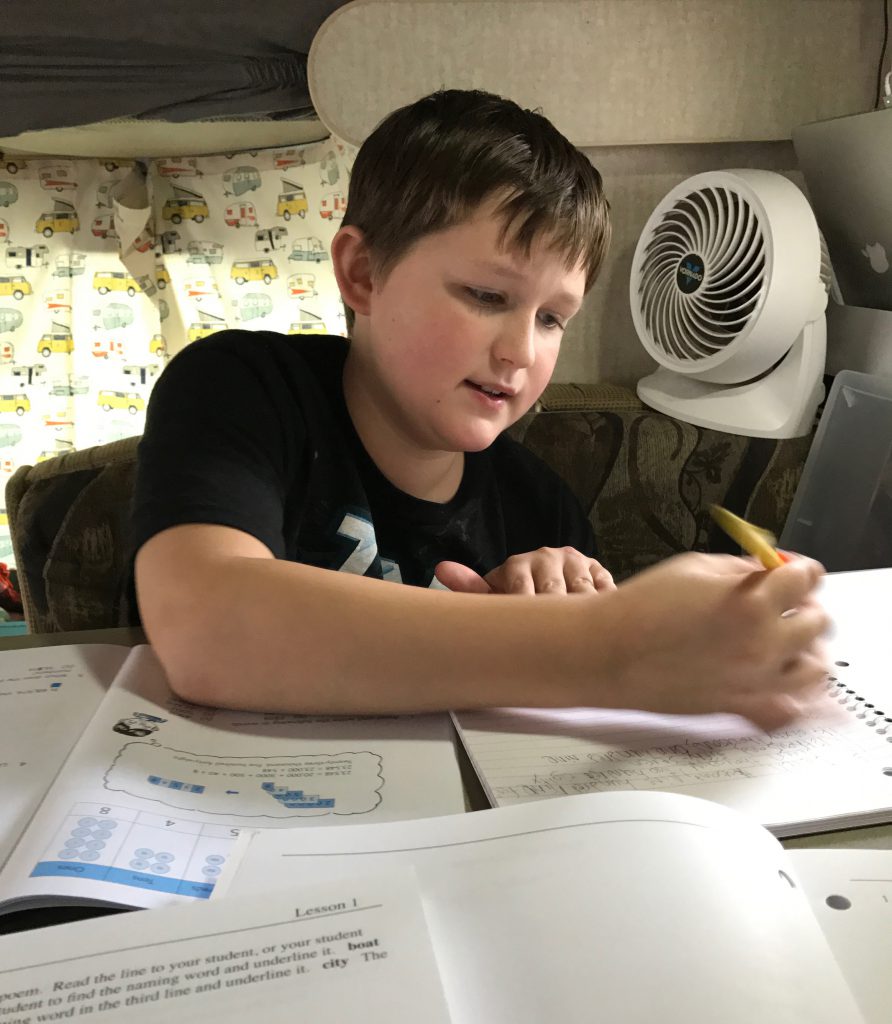 we had a bit of excitement the next morning, when we awoke to a puppy taking refuge under our camper. she was scrawny and hobbly and flea ridden but soooo friendly. we gave her some water and bread, which she gobbled up ravenously. then, the campground folks came by to get her. i’m hoping they found her a home and didn’t end up taking her to the humane society or anything. she loved anna. 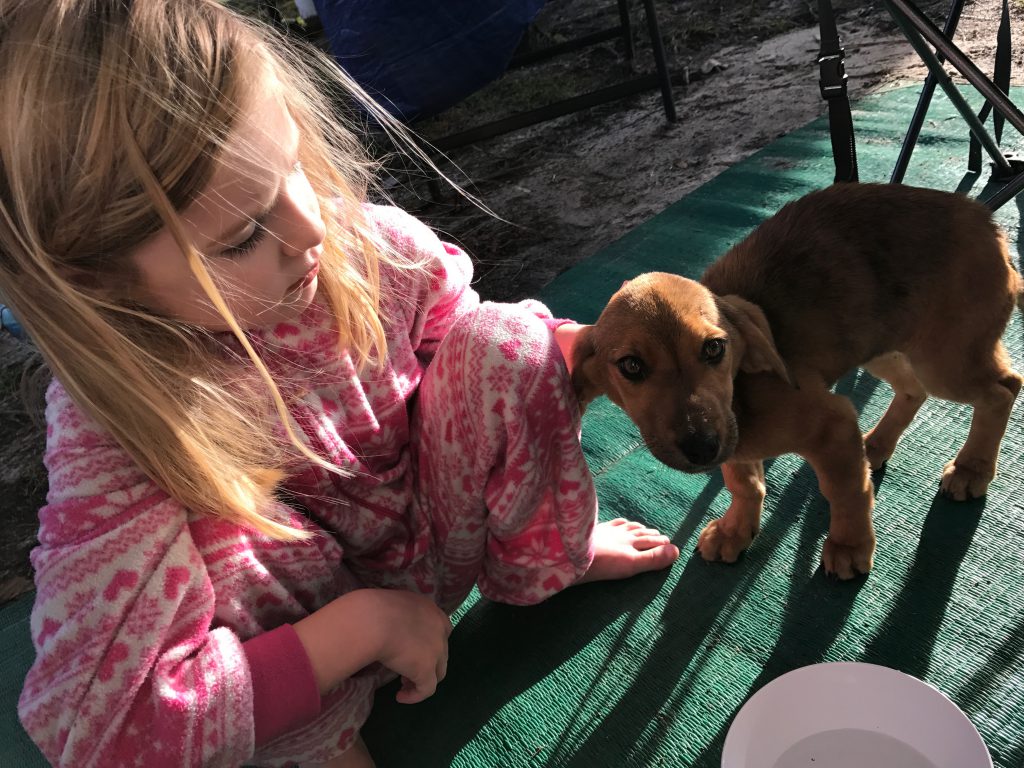 derek took this great shot of anna, during a fishing expedition. 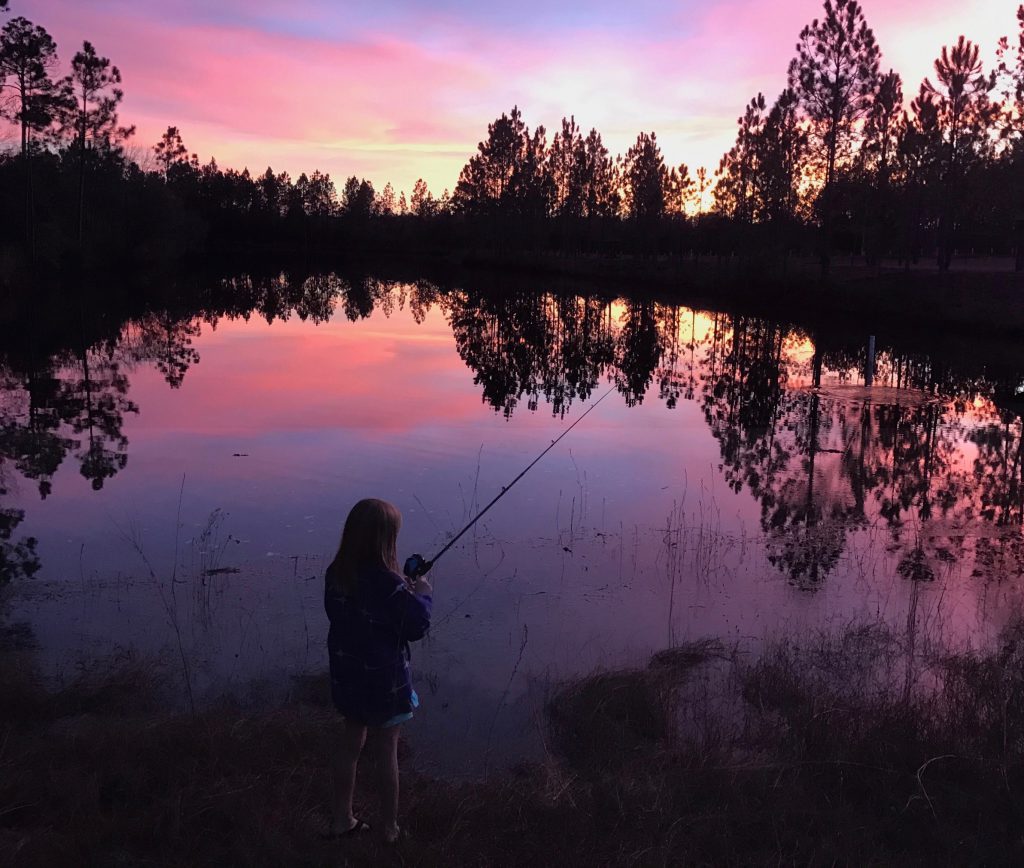 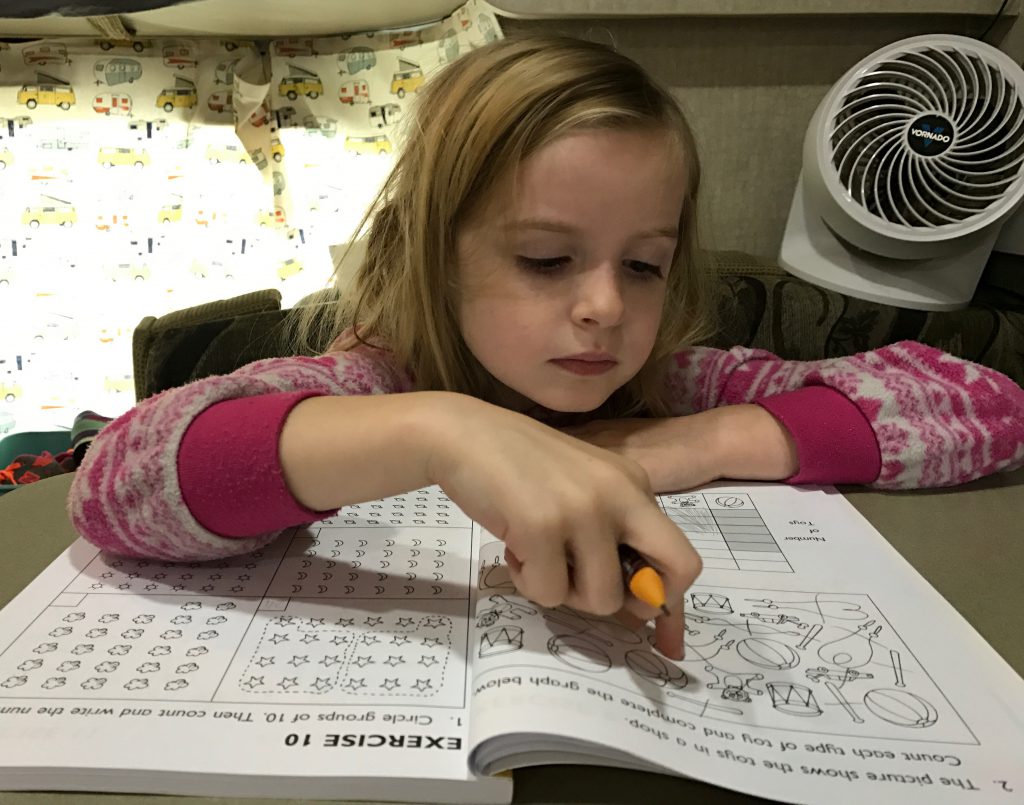 and painting. this is a picture of me, with boogers dripping from my nose. or so hazel tells me. 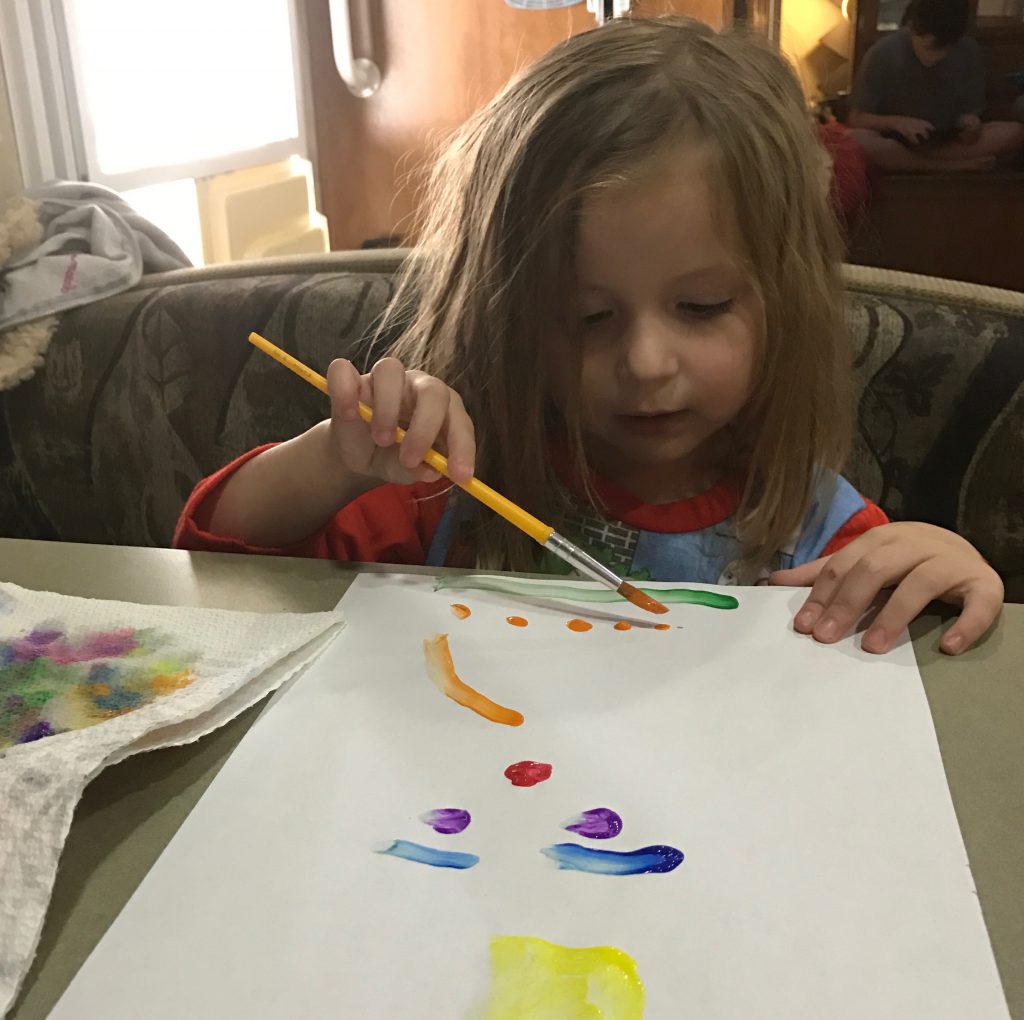 yesterday afternoon, anna disappeared into the back with her ipad and art kit, and emerged several hours later with pages and pages of drawings she had made watching “how to draw” videos on youtube. here are some of highlights. 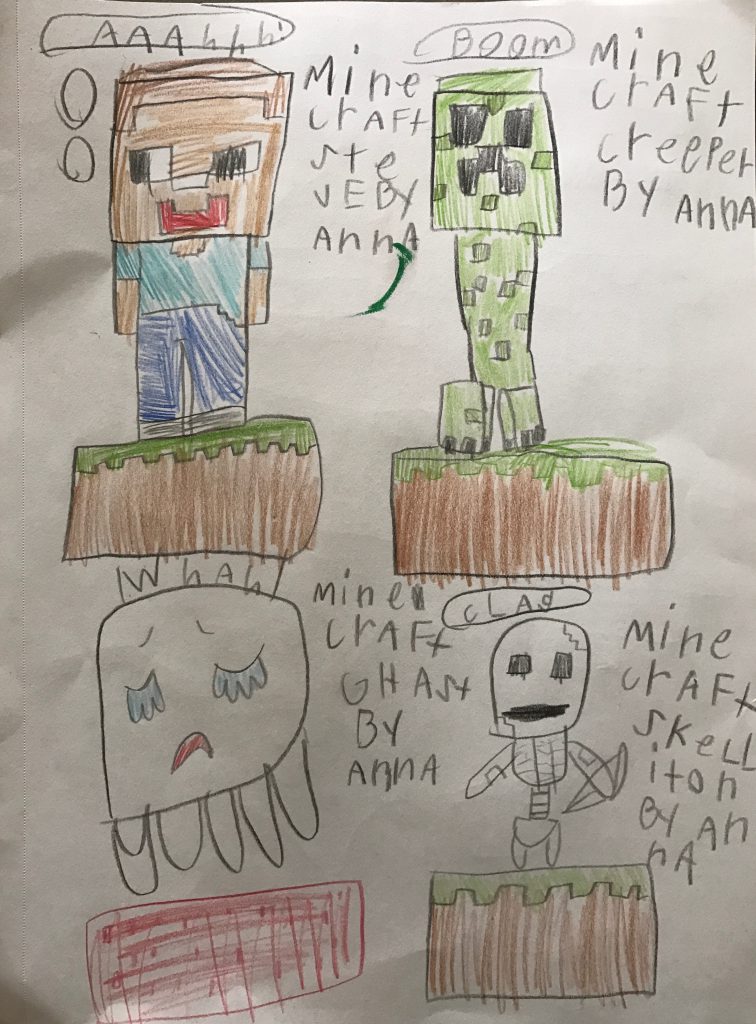 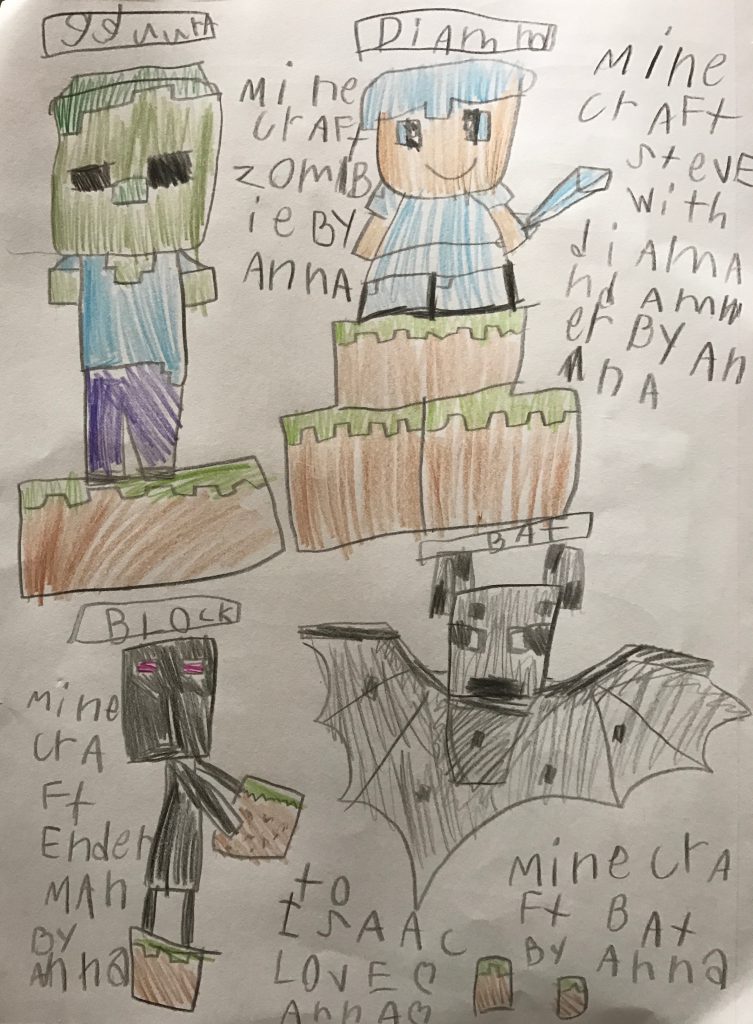 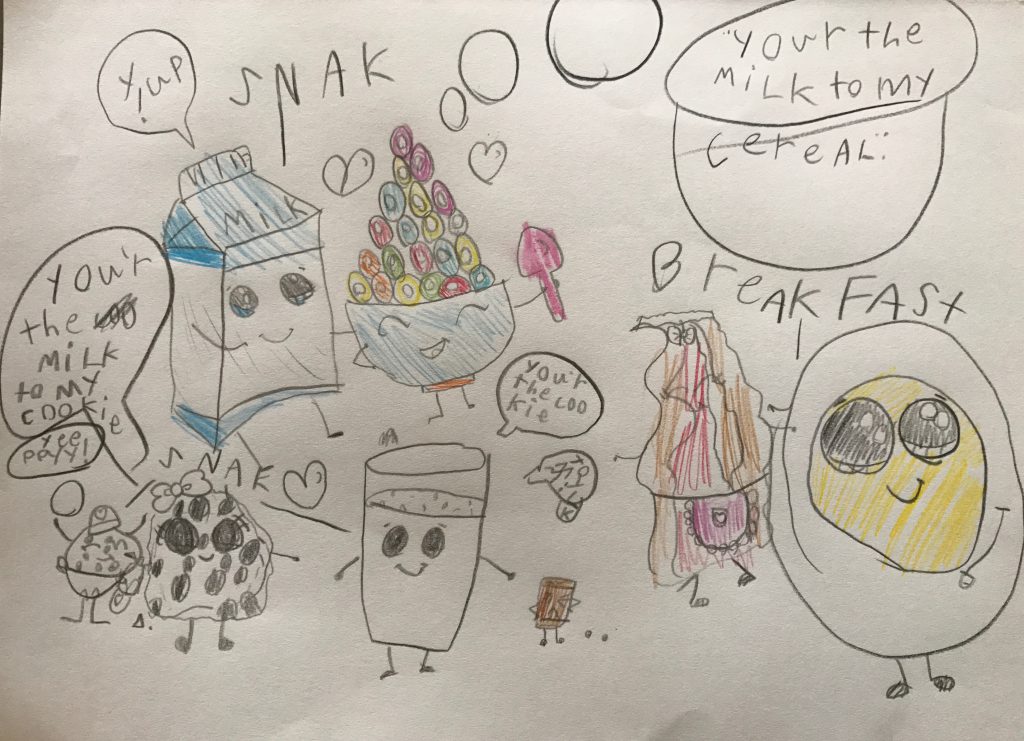 so, that’s the downtime of our last week. i have a couple of posts coming detailing our adventures for the week. but, for now, i have to turn over the computer to isaac, so he program/play minecraft.

tomorrow we head out to pensacola, where we are staying for a couple of weeks at a state park that is right on the gulf of mexico. so, prepare yourself for like 14 straight beach posts. 🙂