when we moved from death valley to lone pine, and started researching things to do in the area, both derek and i were pretty excited about checking out manzanar national historical site. but then we were planning to leave early, so we had to cram it in on the afternoon before we left, after derek got off work. thankfully, it wasn’t too far from our campground and we still had enough time to get in the big parts. 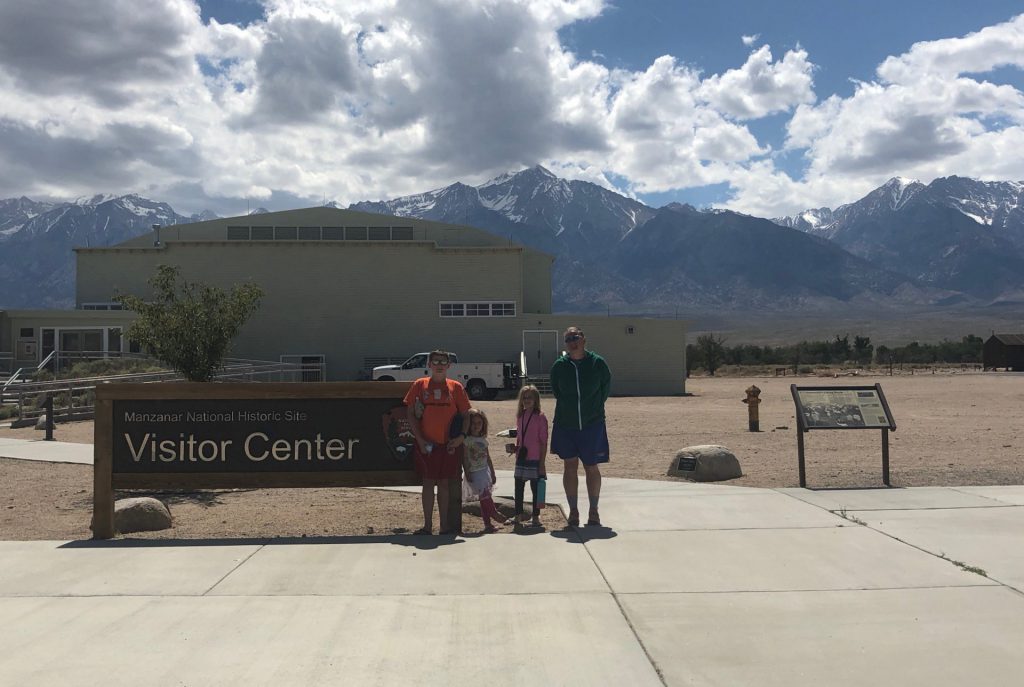 basically, manzanar was the location of one of many japanese internment camps during world war II. after the japanese bombed pearl harbor, hysteria in america set in, and we forced all japanese americans along the coast into what were basically prison camps. i think around 120,000 people passed through them in total. 10,000 or so in each one. most of manzanar was taken down after the war, but this replica shows what it would have looked like in the 1940s. 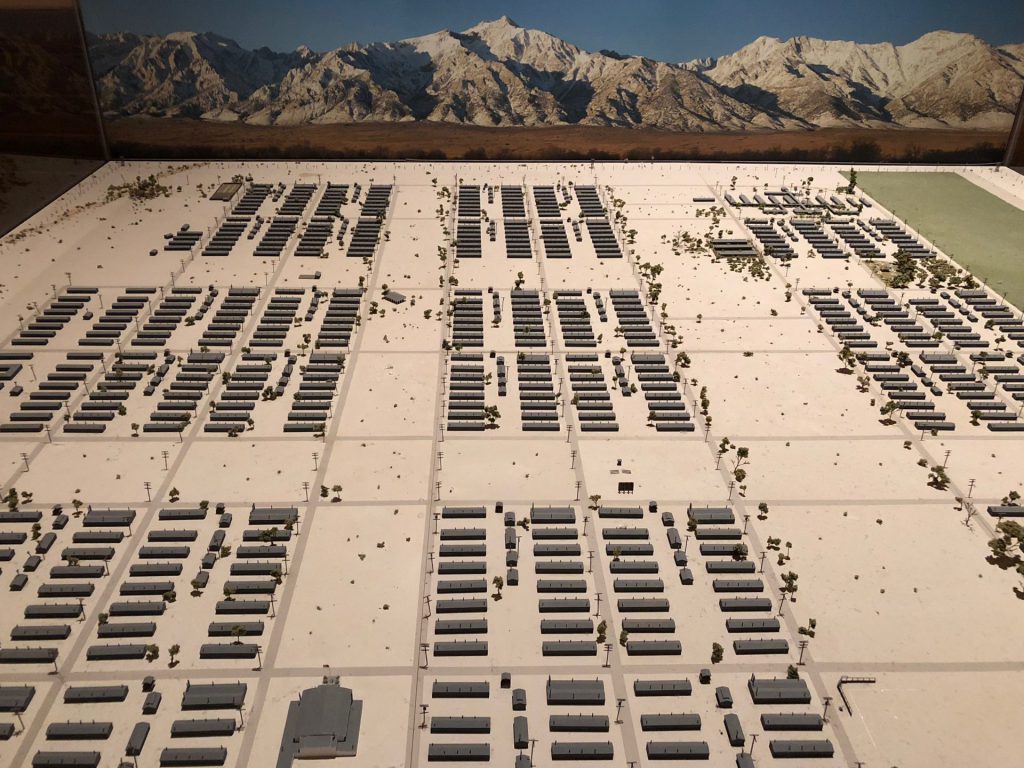 for their junior ranger badges, the kids had to select a replica ticket like the ones assigned to japanese americans as they were herded into camps. the ticket they chose told them about a particular prisoner and took them on a bit of a scavenger hunt throughout the museum to learn more. 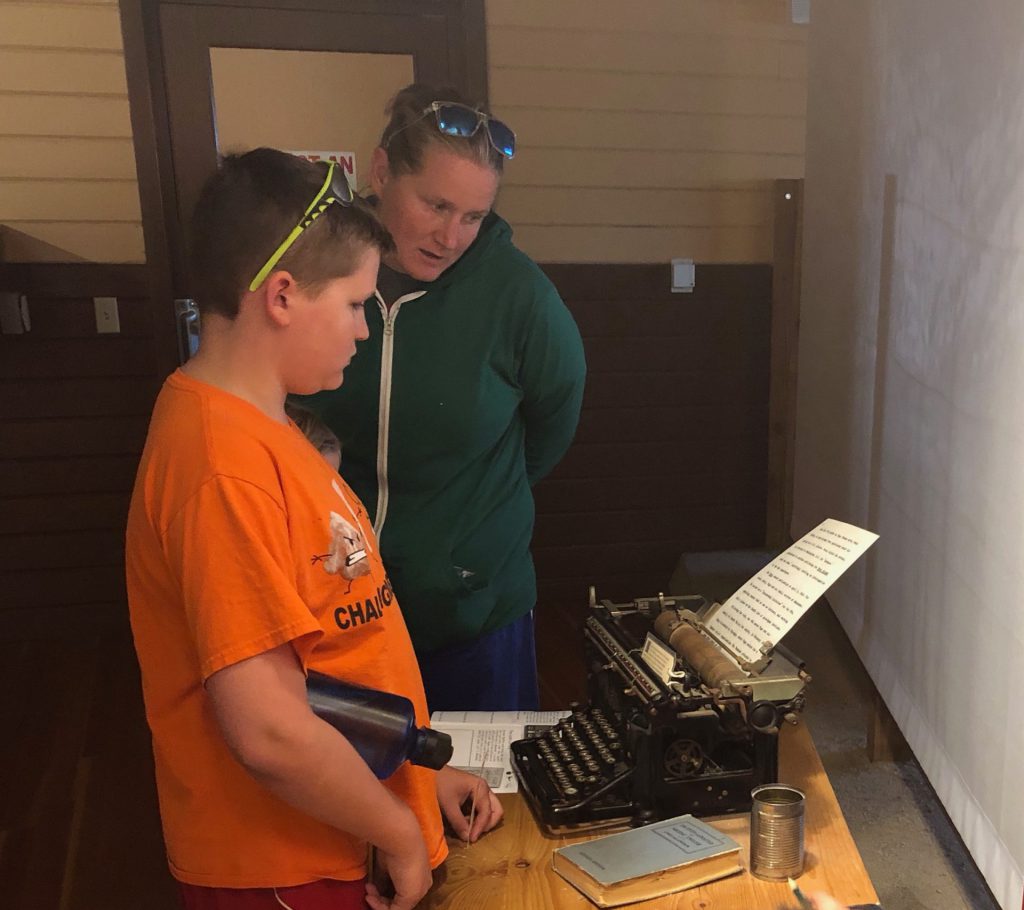 hallway of portraits and quotes. it’s amazing to me how gracefully these folks handled this ridiculous injustice and even how they look back upon it. 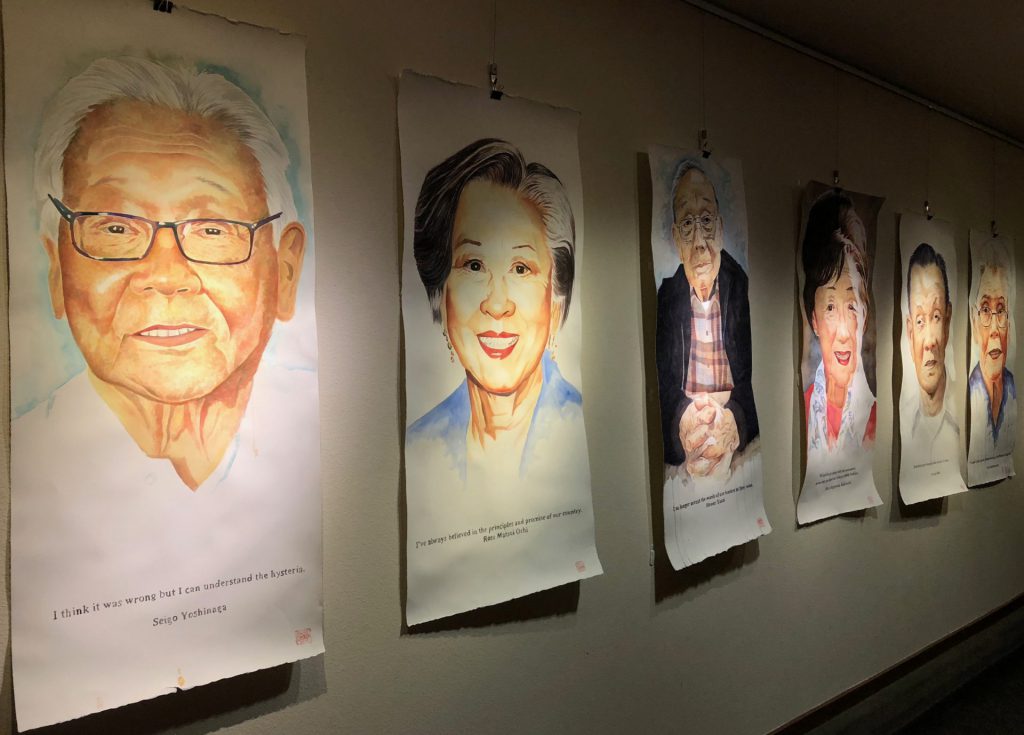 even though internment camp life seemed hopeless, the residents made it beautiful. the women built gardens. the men made this amazing furniture from fruit crates. 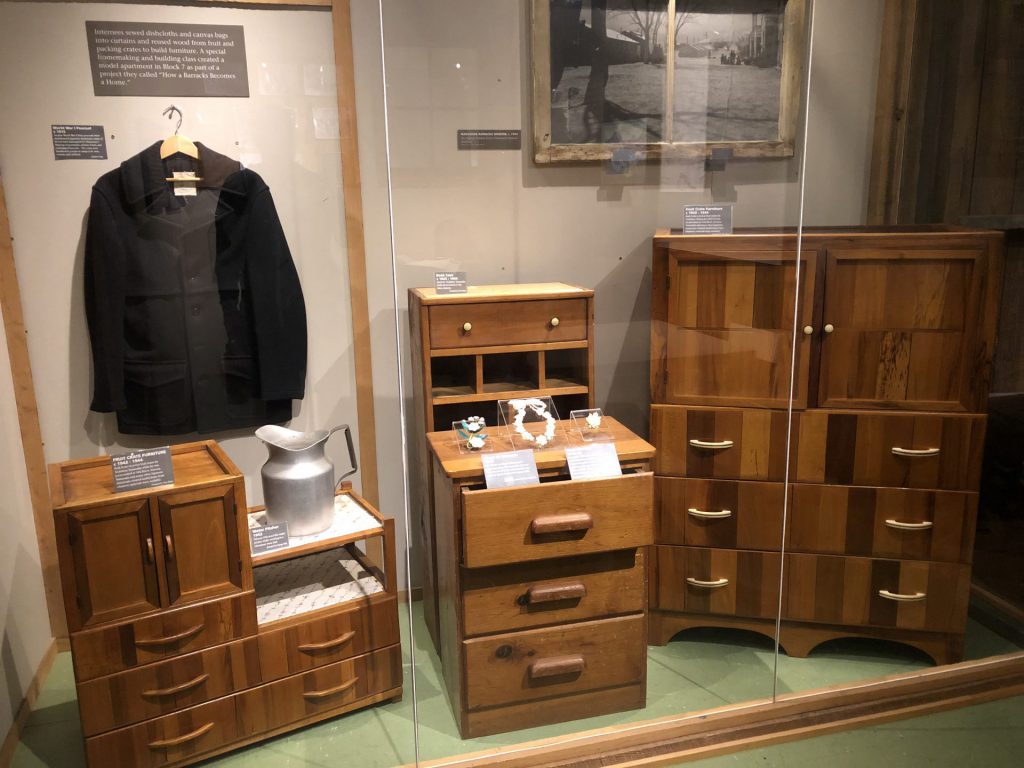 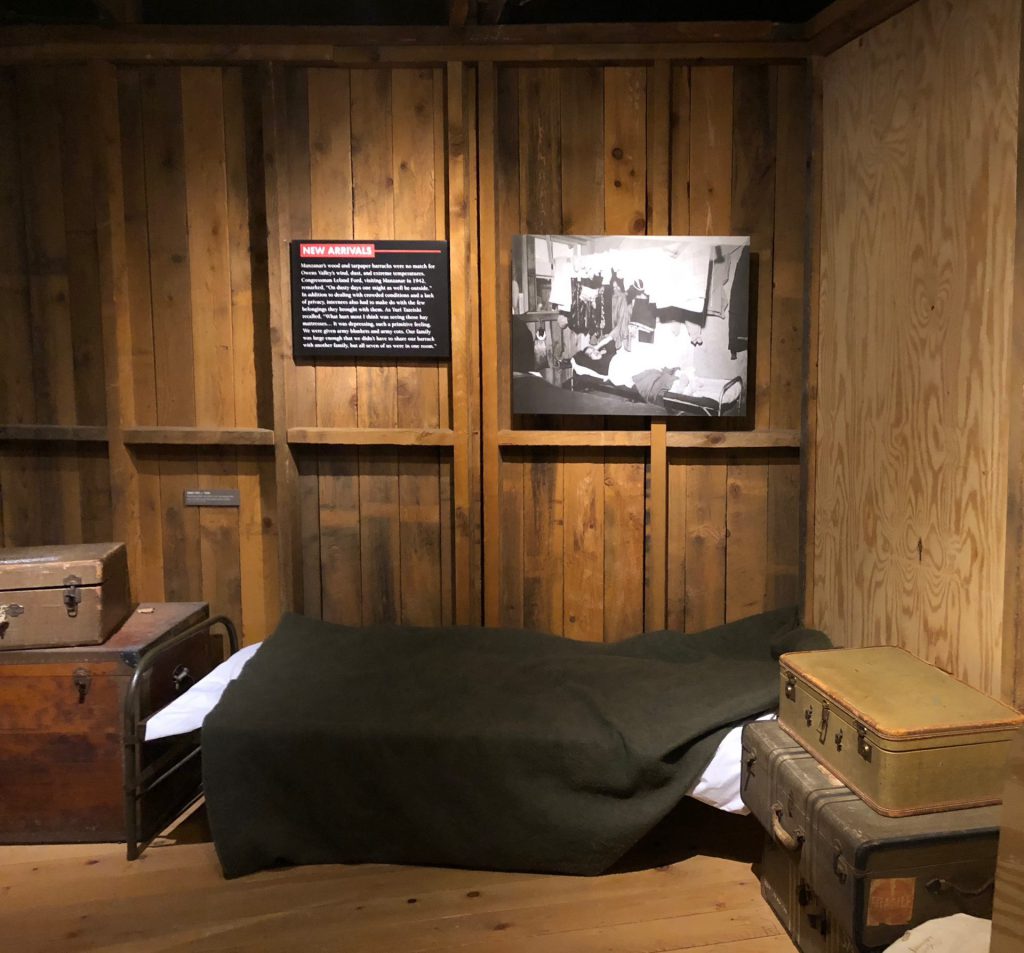 the most sobering. a list of names of the people who lived in the camps. 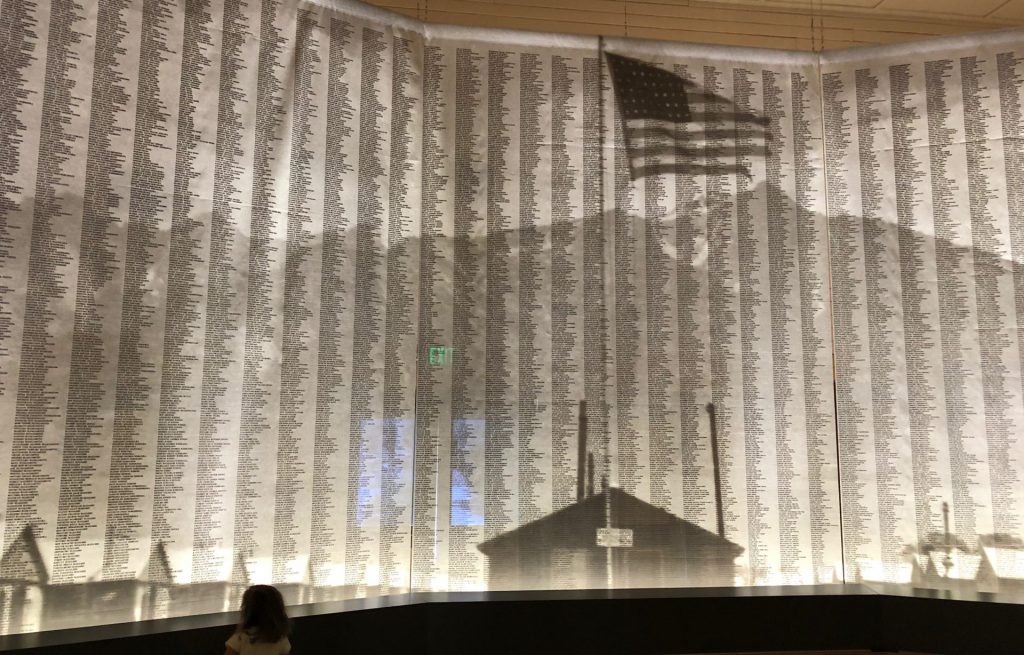 and a very poignant quote about how america tends to operate. (then, and now, comparing pearl harbor reactions to 9/11). 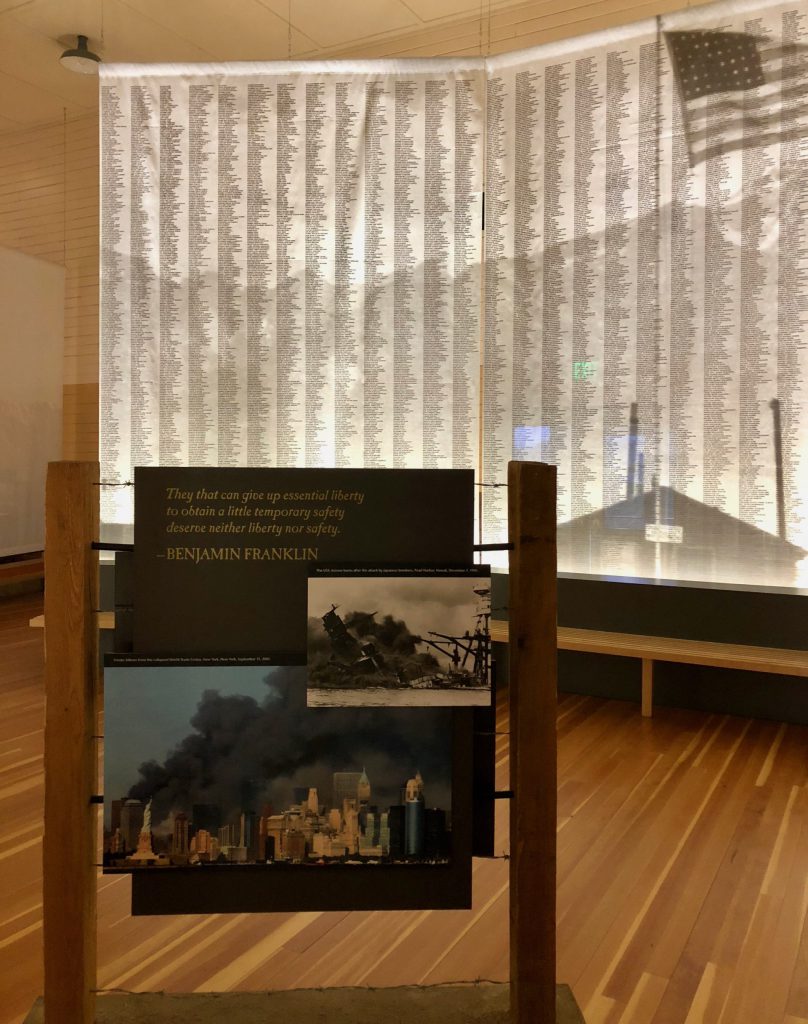 after the (fantastic and beautiful and informative) visitor center museum, we went on an auto tour of the grounds. 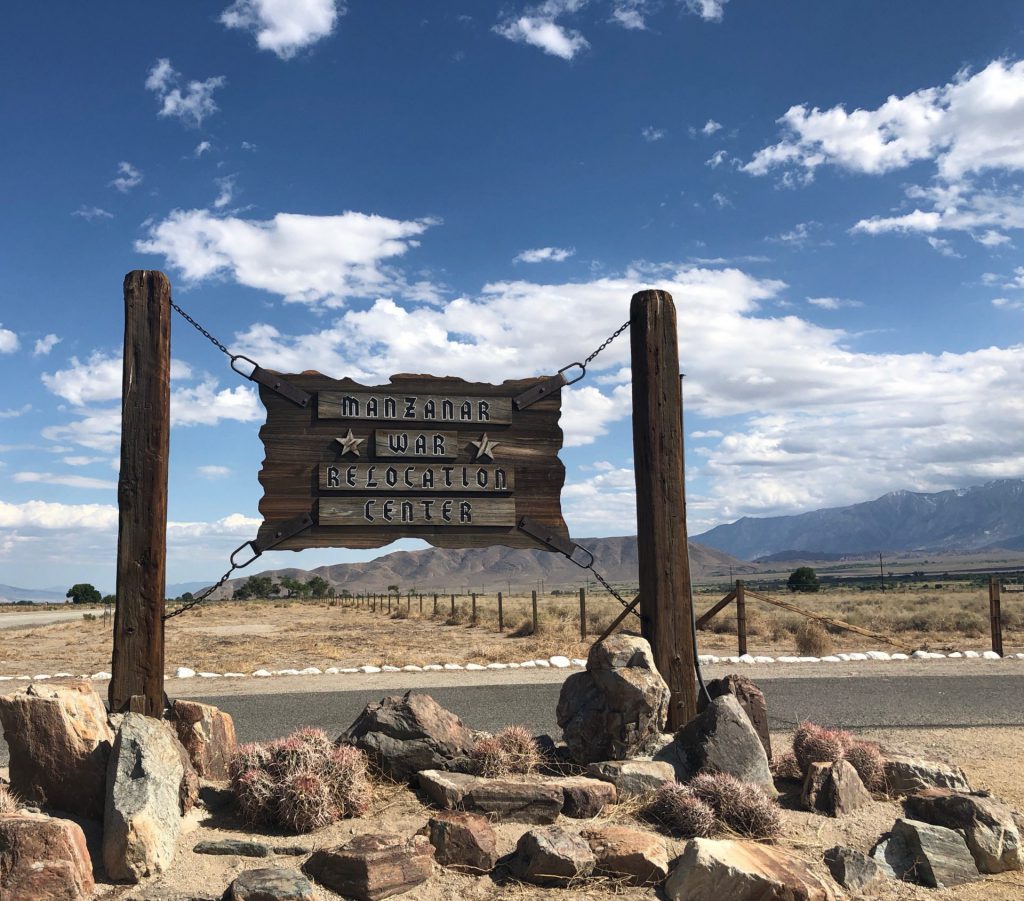 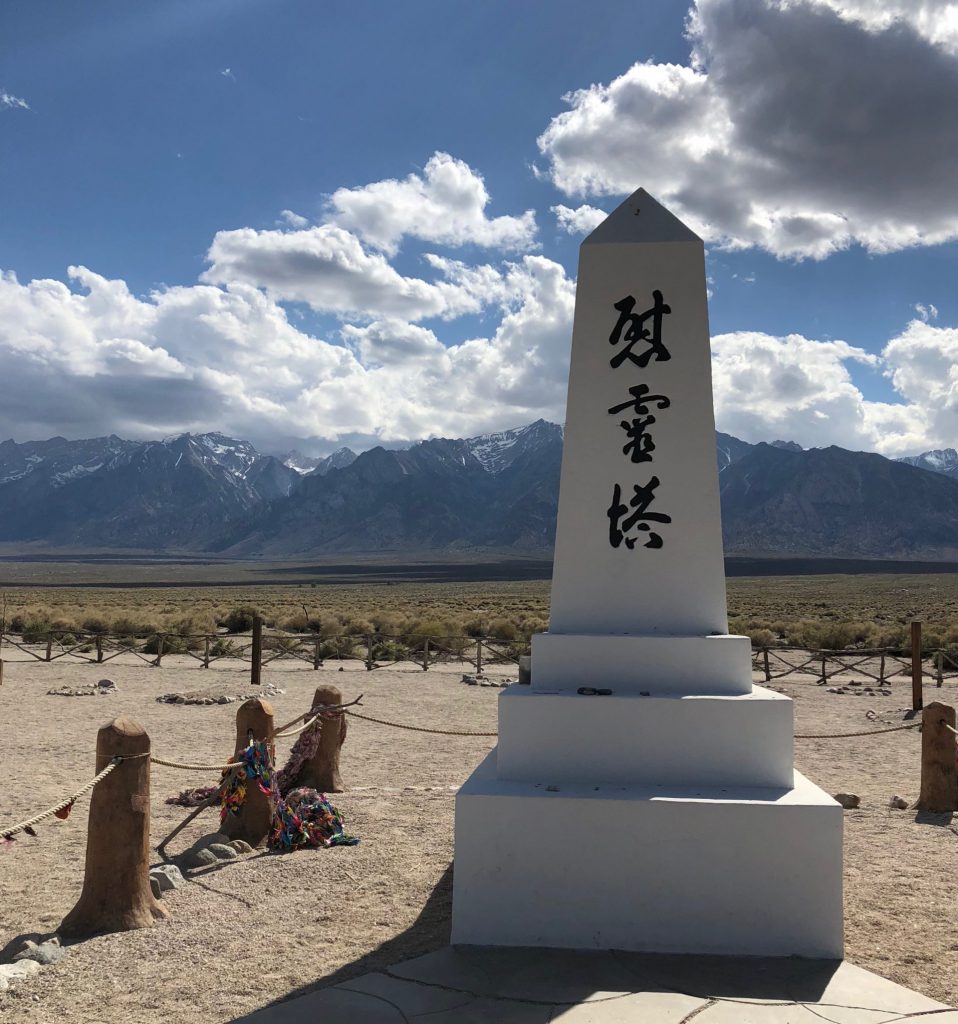 these clusters of origami were everywhwere. so fun. 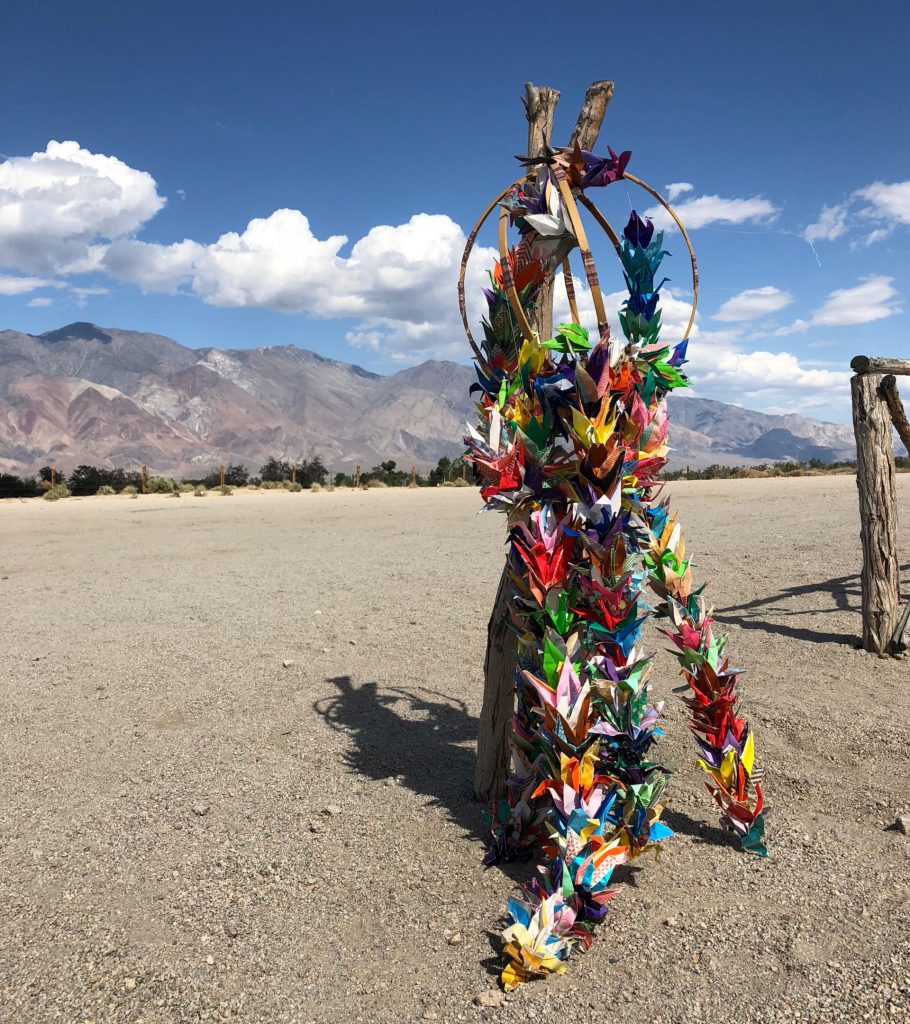 back at the visitor center, the kiddos raced to wrap up their books before the park closed. 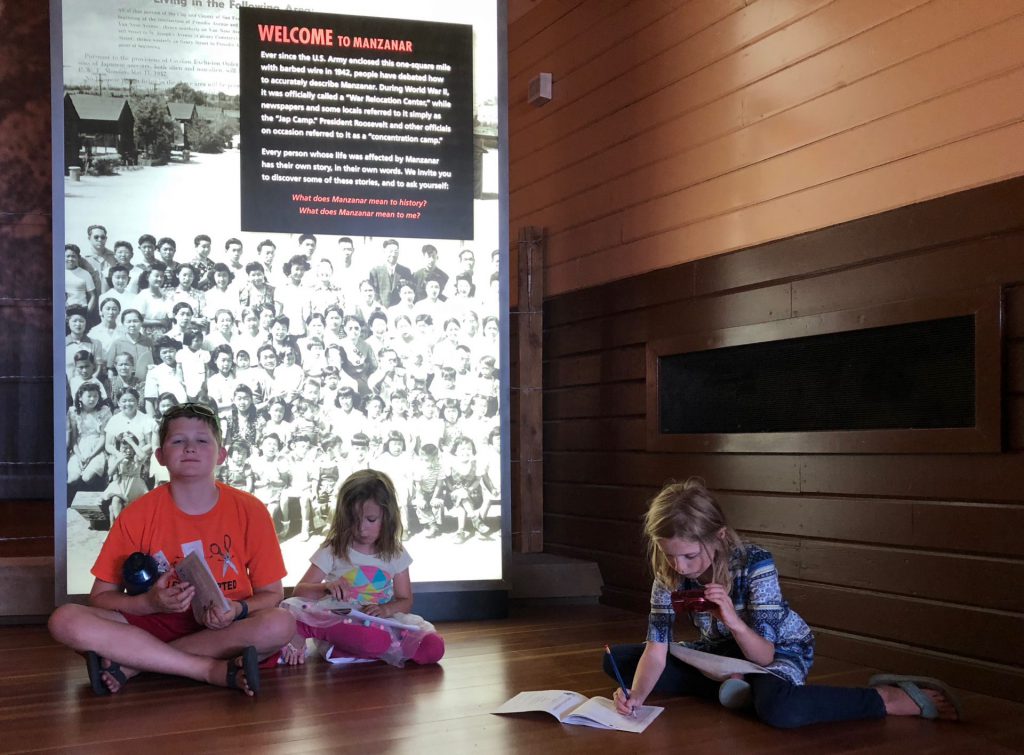 and it’s official. btw, the rangers here were awesome. so nice and helpful.

my only regret is that we didn’t have more time to fully explore this place. maybe when we come back to this area, we can give it some more attention. it definitely has stuck with me, thinking about what it would have been like to be ripped from your life and sent to a camp, just because of your nationality. even anna told me, “whenever we go to a place like this, i always try to imagine what it would be like to be a kid back then” and i think it really affected her.

anyways…
the next morning, we packed up for a long travel day. and like always, we needed to kill some time so that we would arrive at the same time as derek. sooooo, we stopped for lunch. and then hit up the cesar chavez national monument. 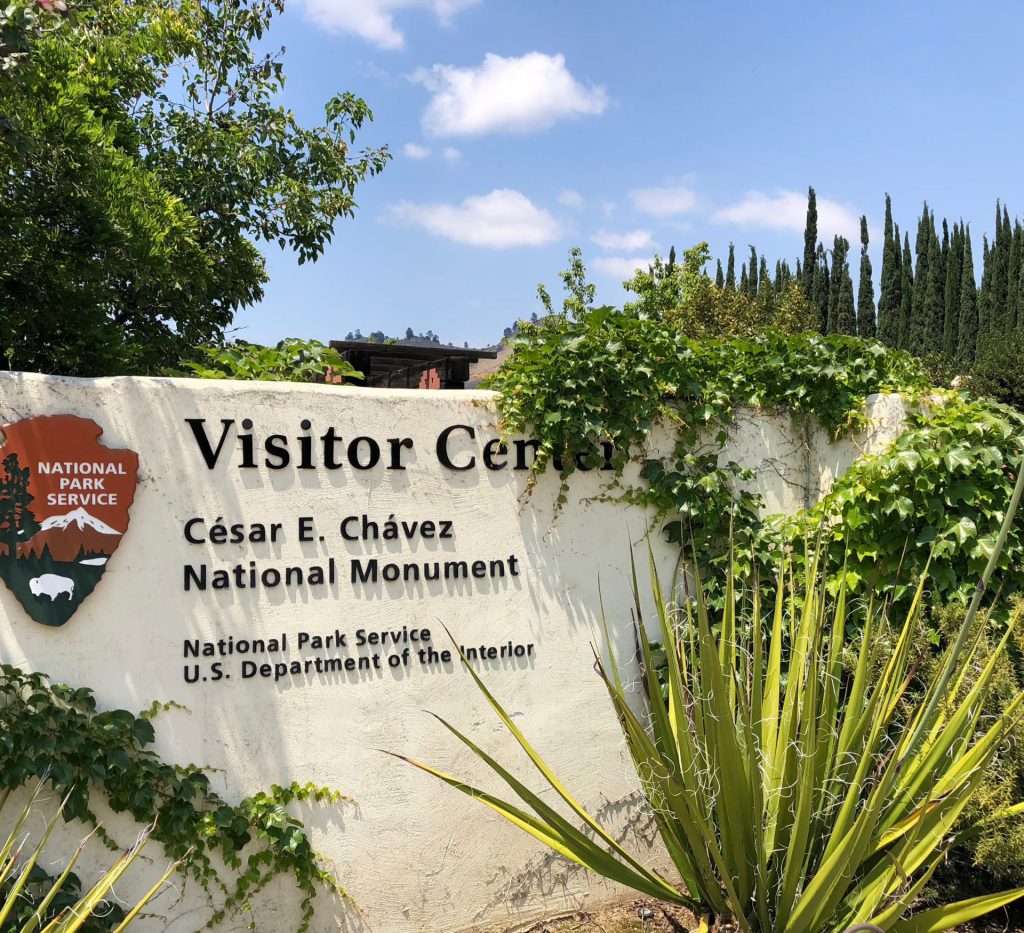 i won’t lie. i didn’t know much about cesar chavez before all of this. and i think it was all a little above the kids heads. but they worked their way through and hopefully retained a little. 🙂 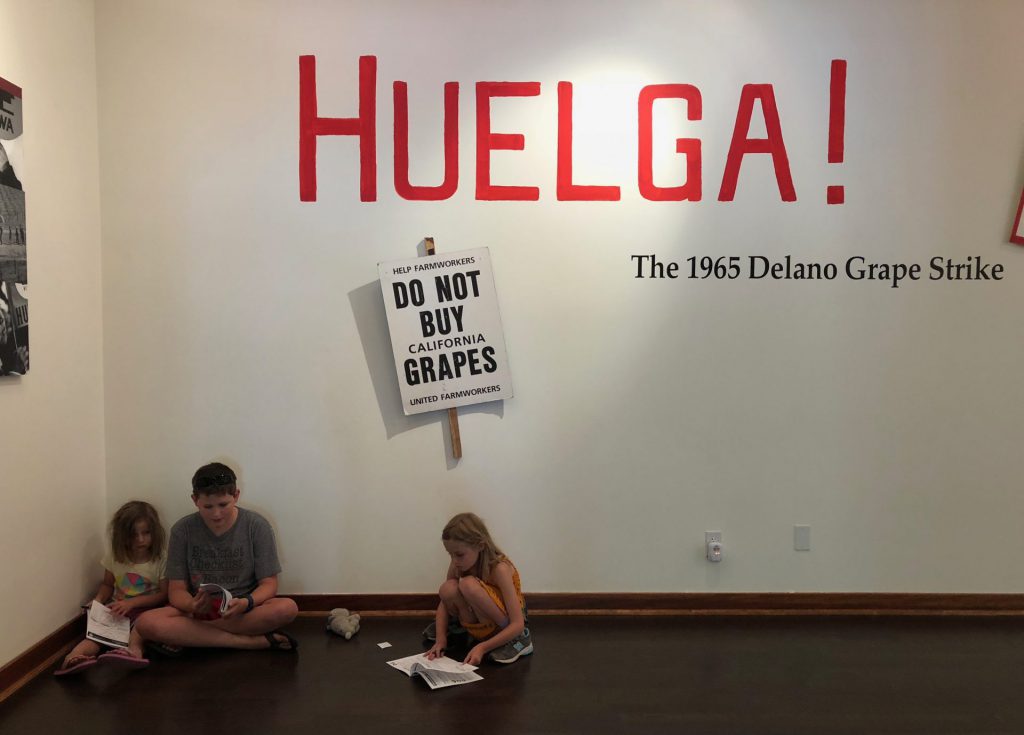 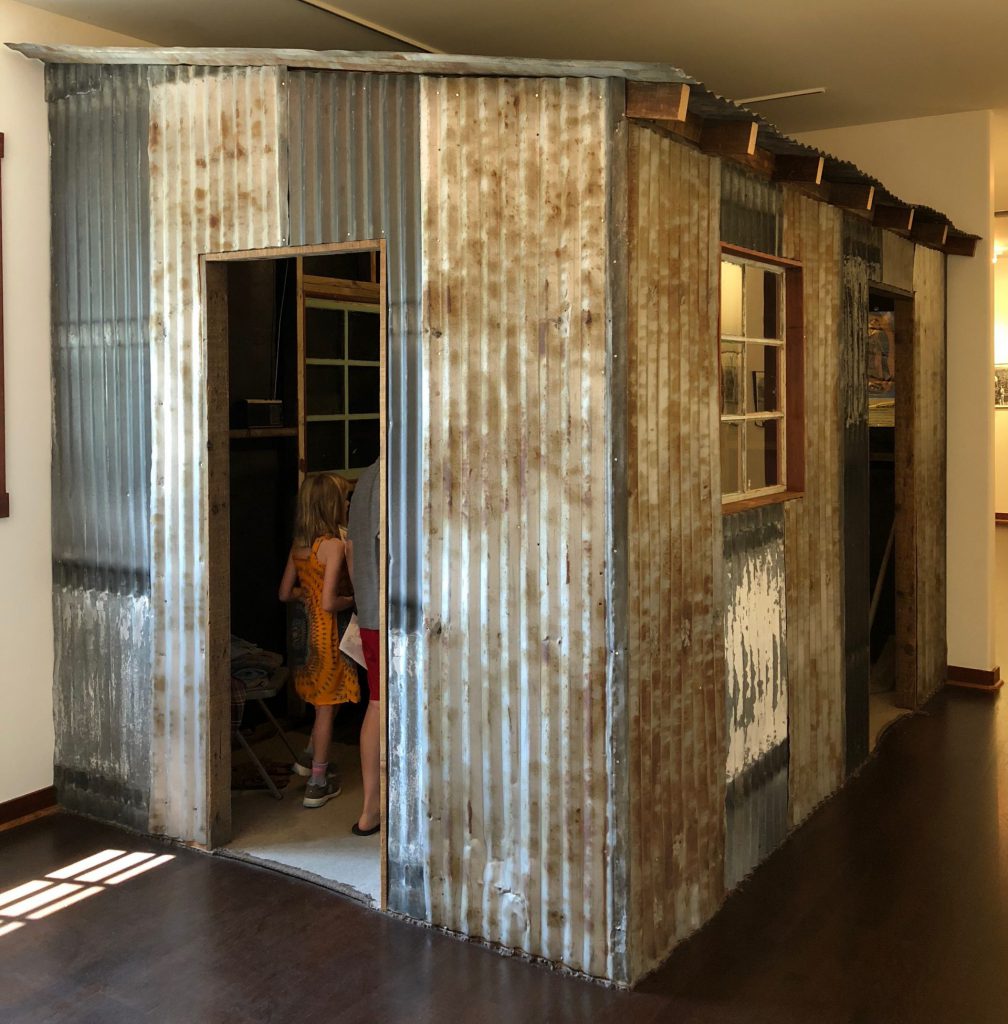 taking it all in. 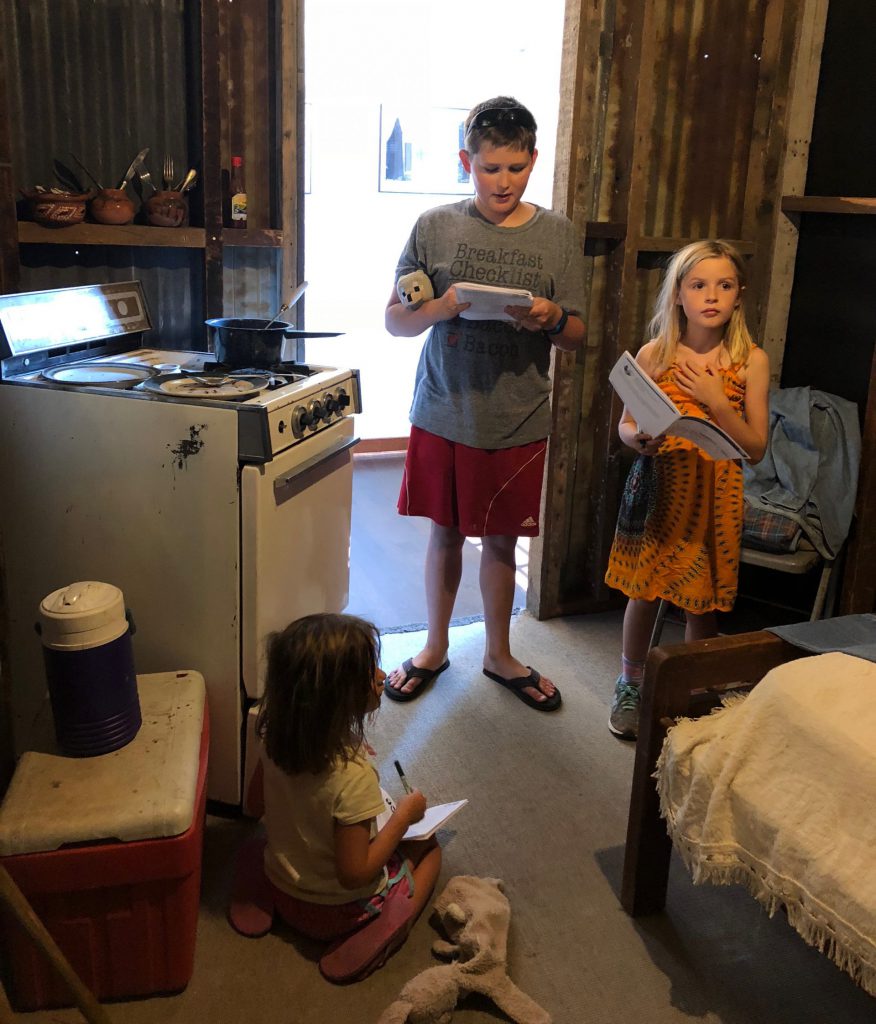 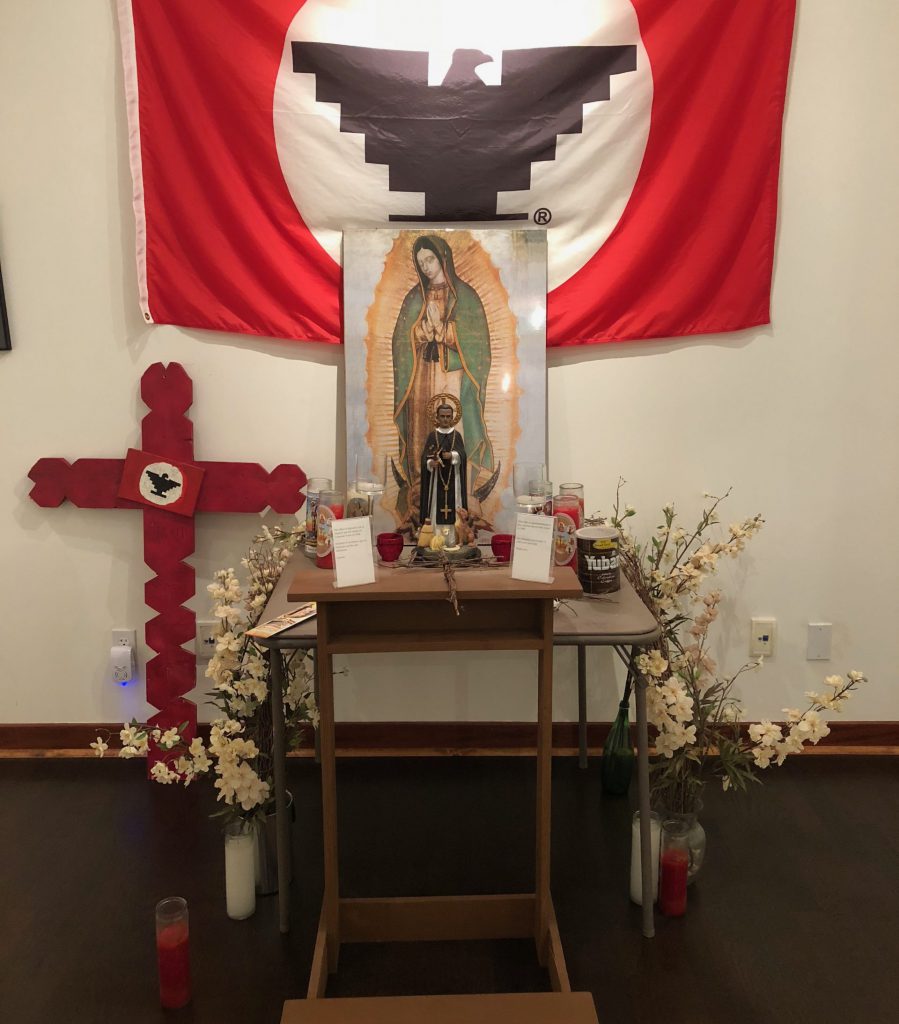 basically. cesar chavez was a leader in the movement to create better working conditions for farmers and for civil rights for latino americans. he bought a bunch of land in the area for their headquarters. now it’s part national monument, which consists of the visitor center and museum and memorial garden where he and his wife are buried. the kids had to do a scavenger hunt in the garden for a junior ranger activity. anna thought these prickly pear cactuses were cool. purple with yellow flowers. and yellowish green with purple flowers. 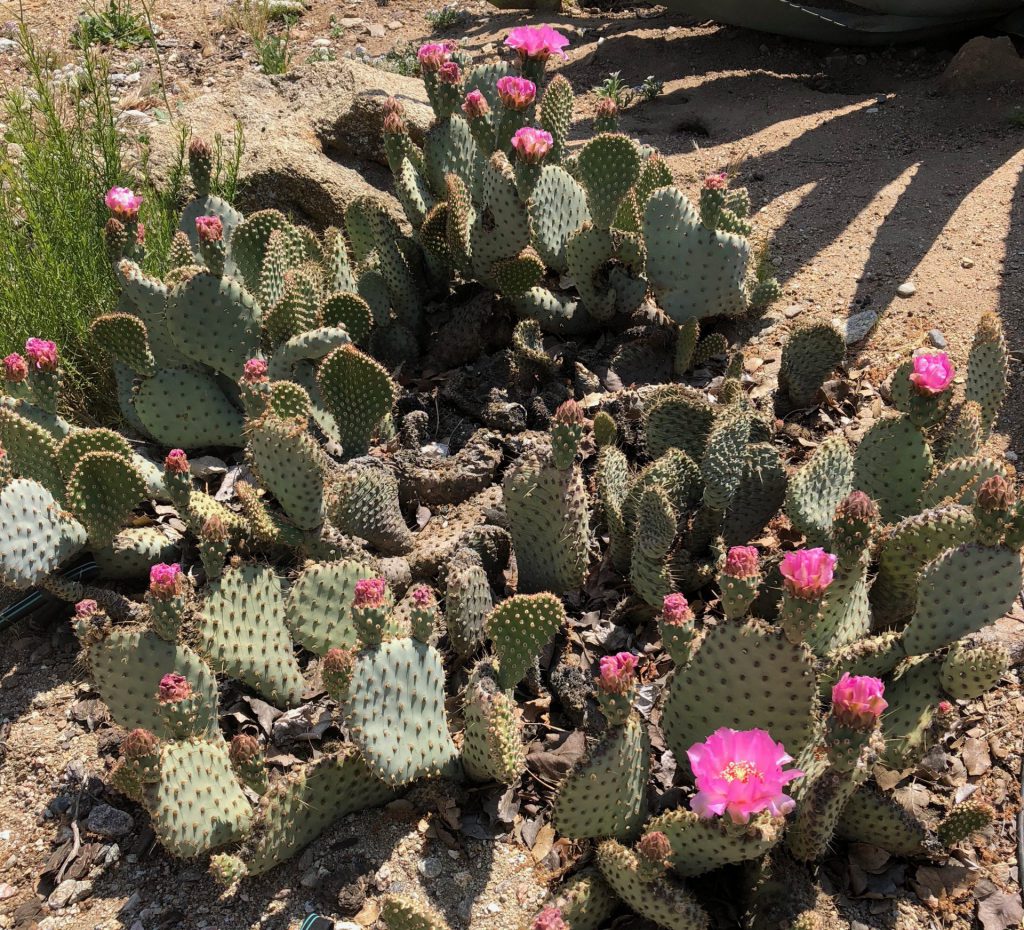 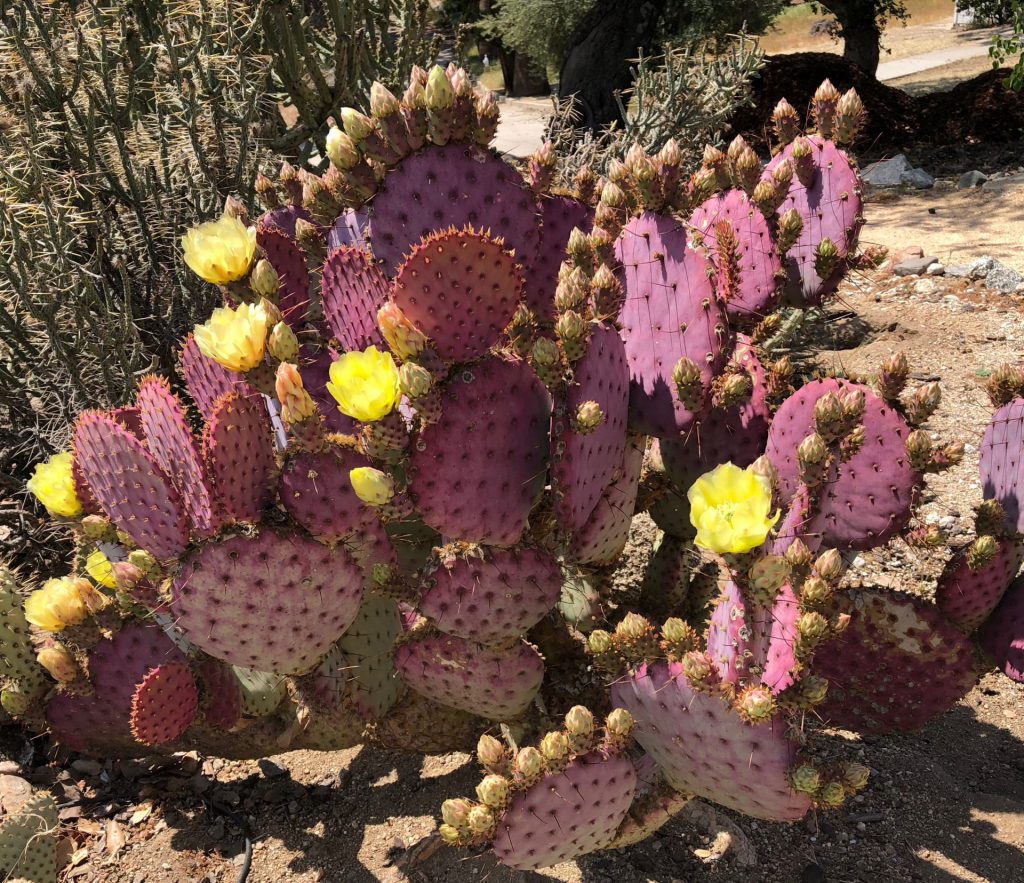 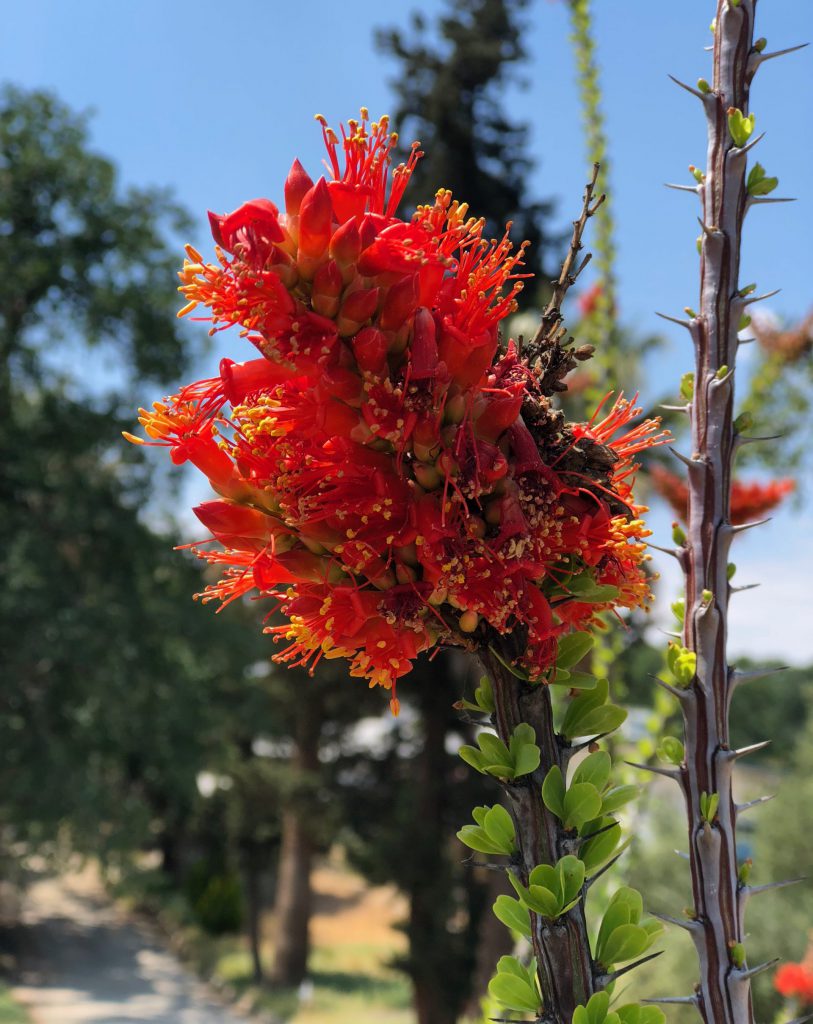 the actual burial spot of cesar chavez and his wife. 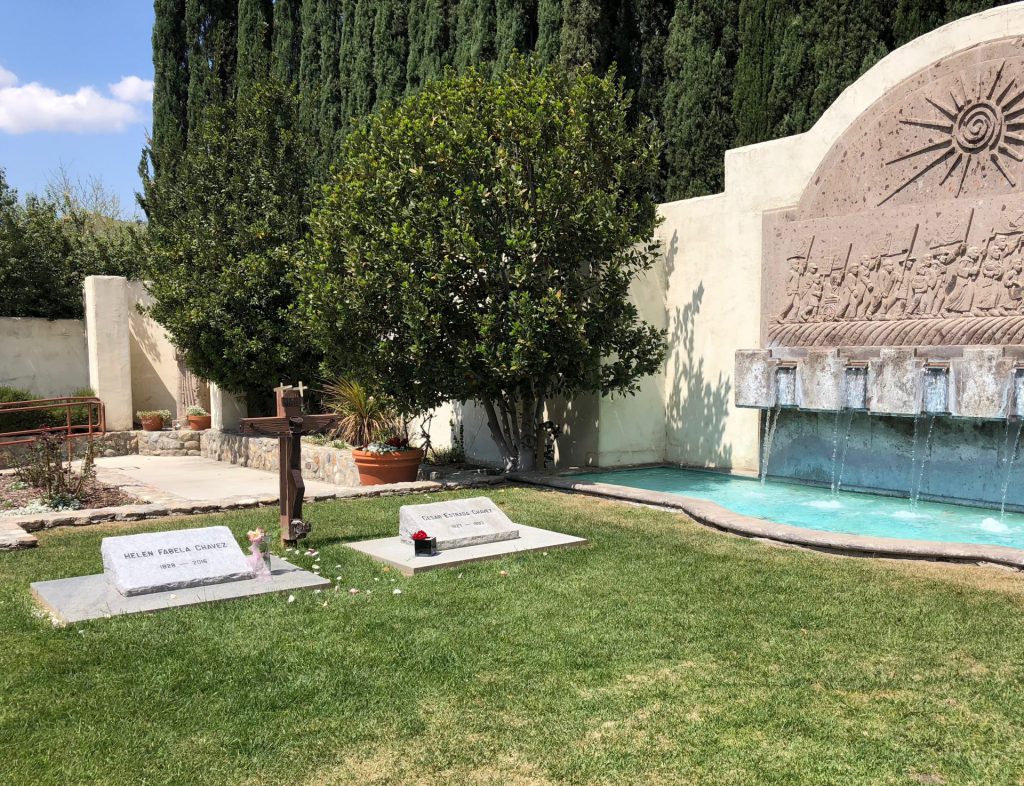 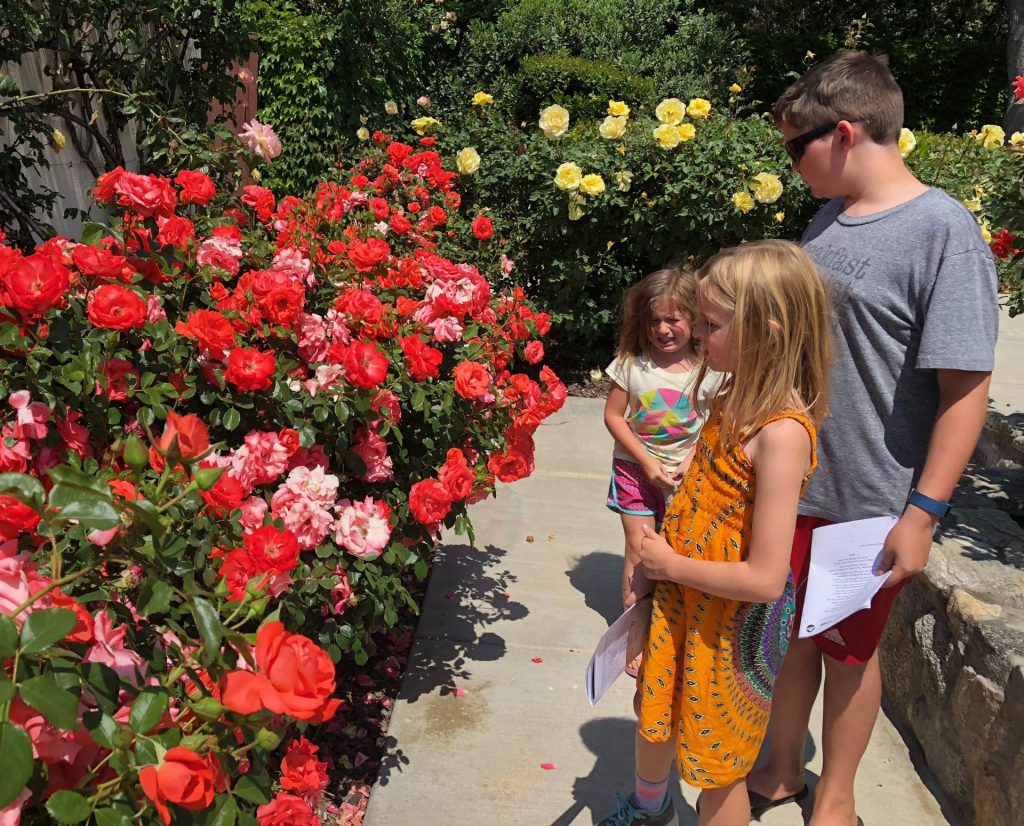 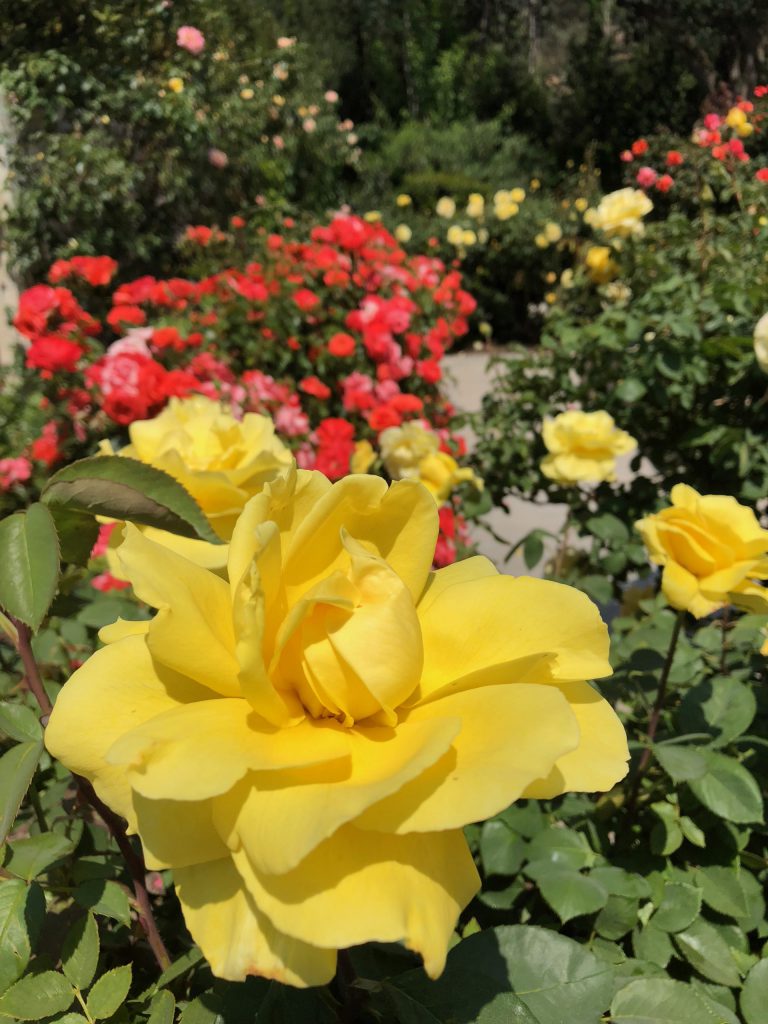 back inside, we raced to finish up the junior ranger books. and of course take fun pics. 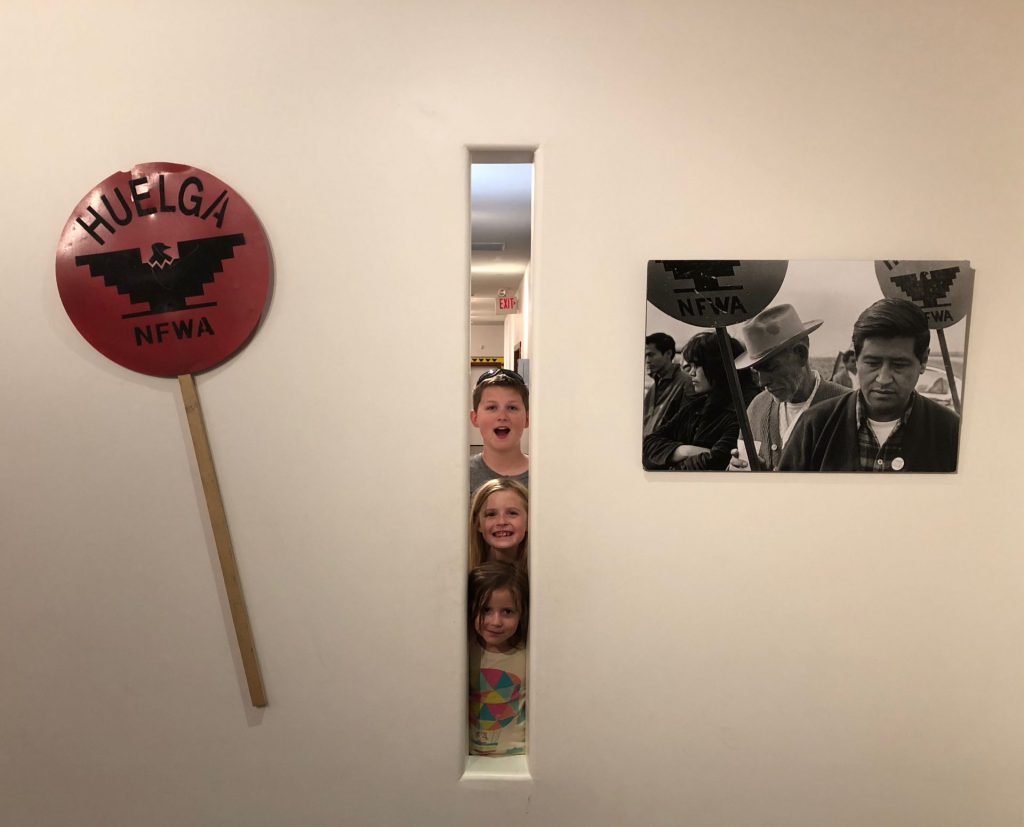 this is my favorite thing ever. at manzanar, we learned that it was decades later when the us finally apologized to japanese americans for the atrocies of the internment camps. and just who was the president then? why, ronald reagan. so, it was pretty cute when anna drew ronald reagan as her “hero” in the cesar chavez junior ranger book. (don’t worry, isaac chose youtube sensation, dan tdm, so i’m still only an ok parent). 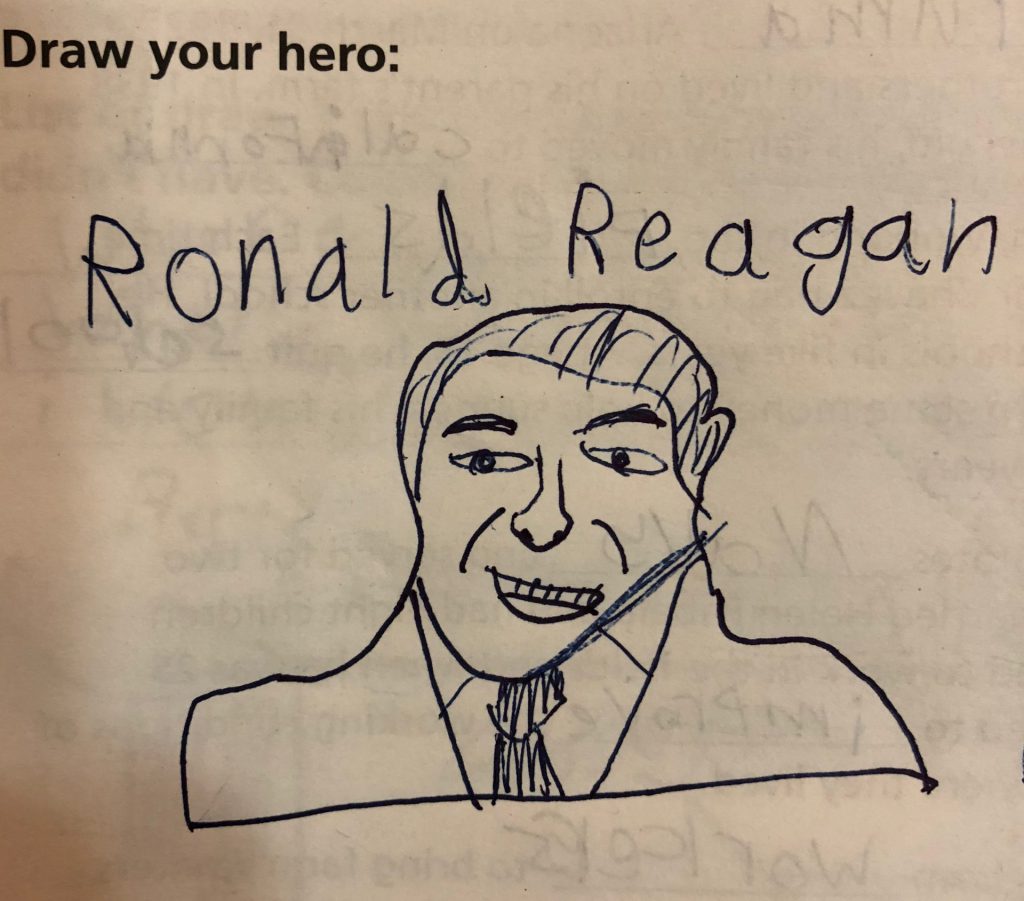 after we were all sworn in, we made one more stop, just down the road, to the tehachapi loop overlook. basically, it’s a big loop in the railroad track as it climbs/descends a grade that is too sleep to take on straight. and if the train is over a certain length, it will pass over itself. we hoped for a train, but only waited for 10 minutes before giving up. it’s hard to make out in the picture, but it’s back there somewhere. 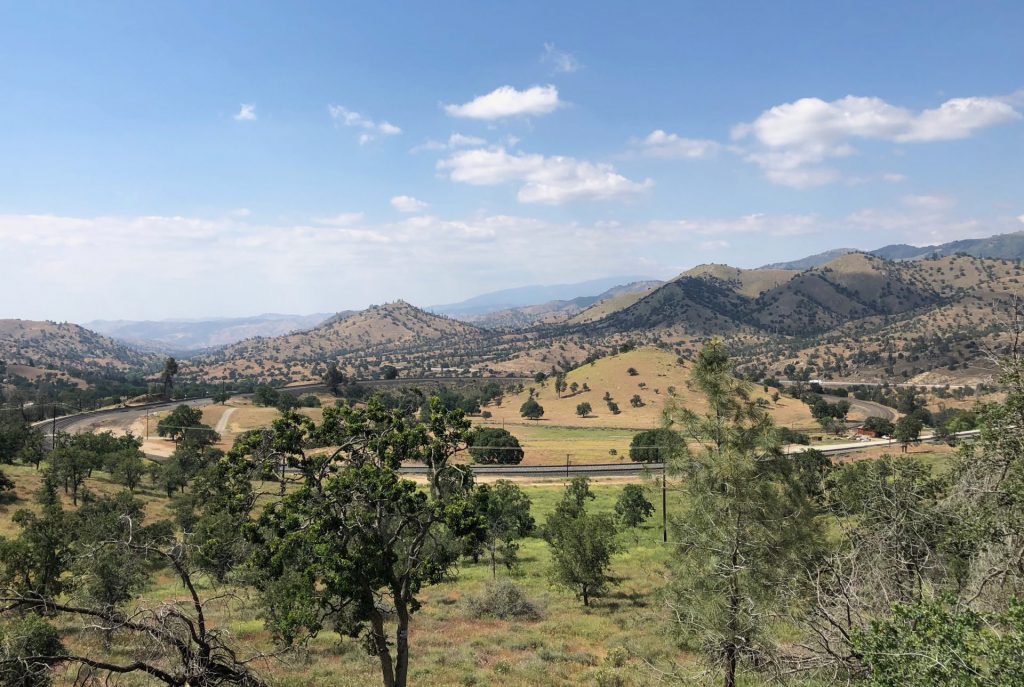 this train enthusiast was a fan. 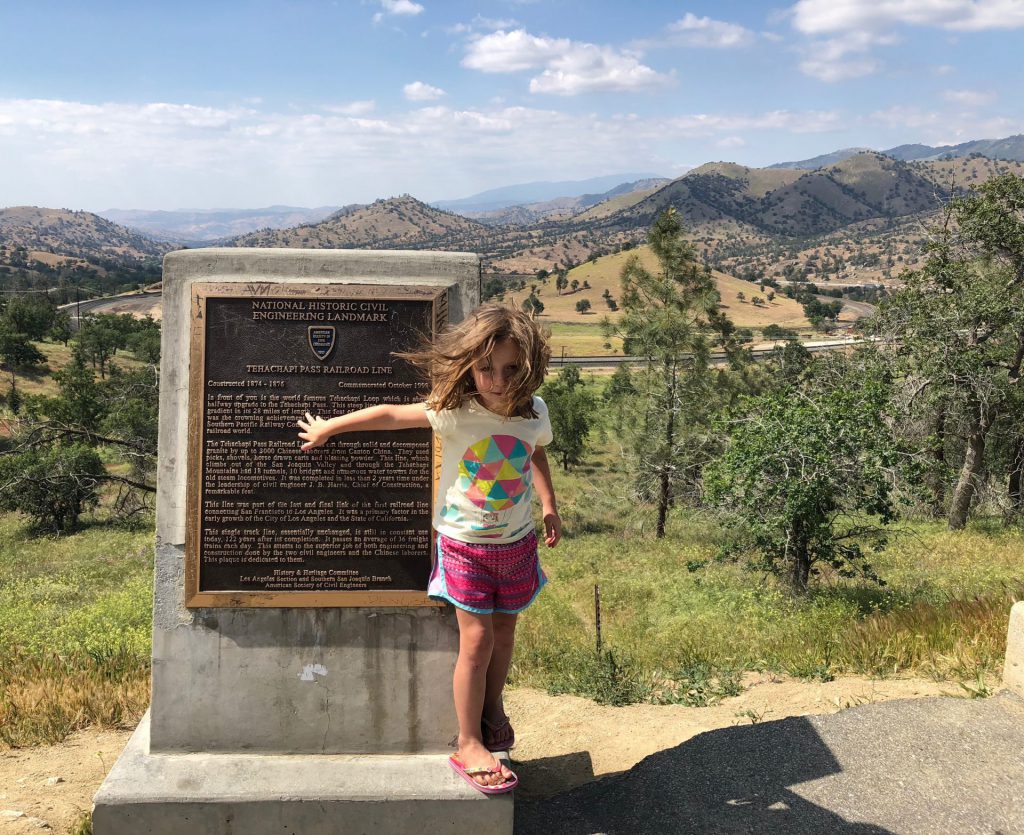 aaaaaaaaand. that’s the end of our national park service educational weekend and travel day.
we continued onto bakersfield, and i’m all caught up. (not counting the actual bakersfield time. sigh).
we head to possible no mans land internet-wise for the next little bit, so see you on the other side.

One Reply to “manzanar and cesar chavez field trips.”