anna and i love to go on little side tent camping adventures. so, when we were able to figure out a two day trip to santa cruz island, we were super excited. but, we knew it would require a bit more preparation and planning and gear and such. armed with our brand new backpacking packs, we set about cramming all of our gear into them. shouldn’t be too hard, right? 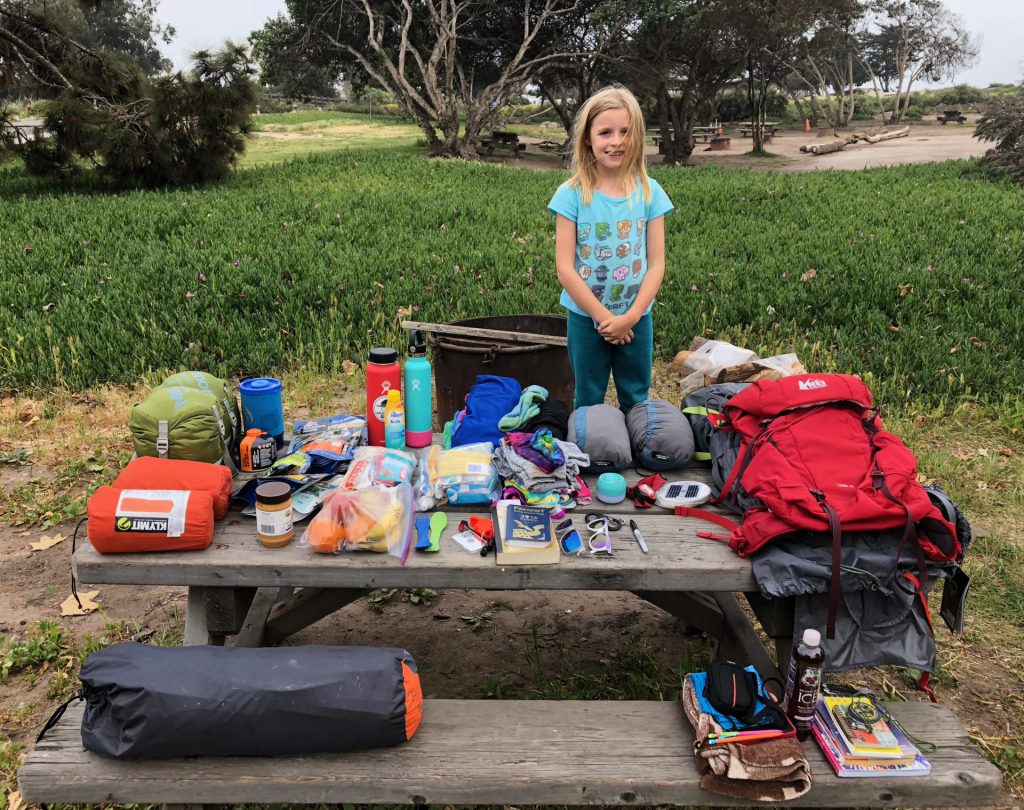 once we were packed up, anna took a little test run with her pack, to make sure it wasn’t too heavy and that all the straps were properly fitted. 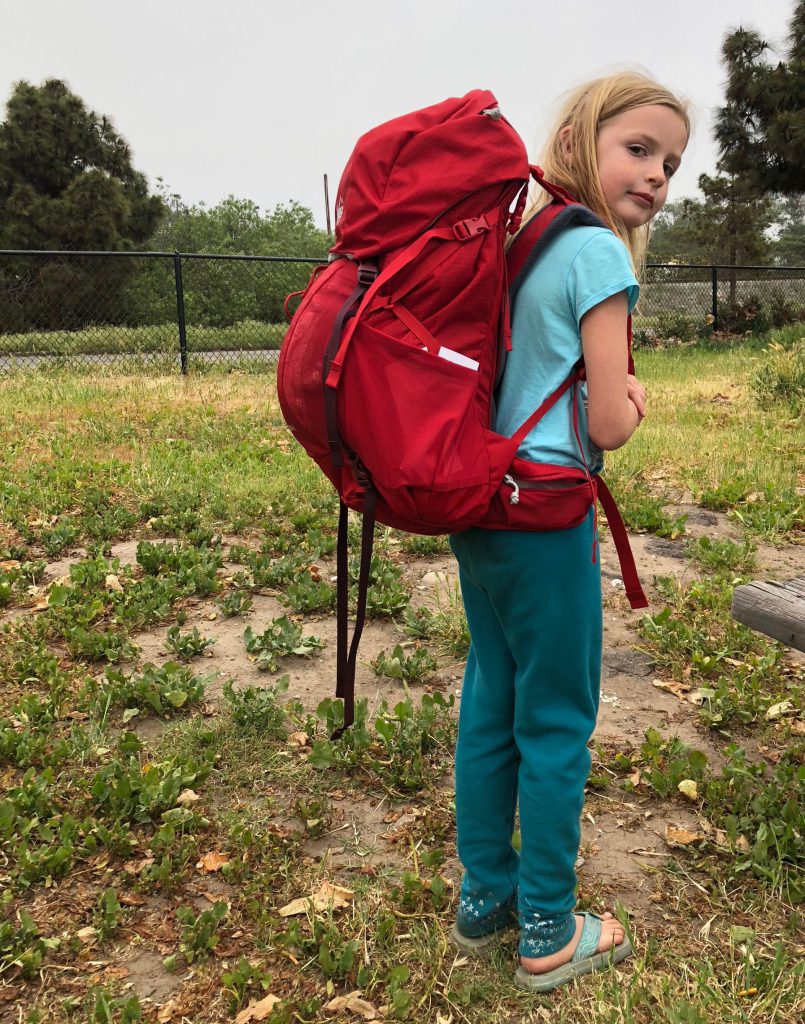 the next morning, we were up bright and early and ready to head to ventura to catch the 9am ferry. the weather was overcast and chilly and we were a little worried about our trip, that we would be miserable and cold and night and that the views wouldn’t be great. but we bundled up and crossed our fingers. 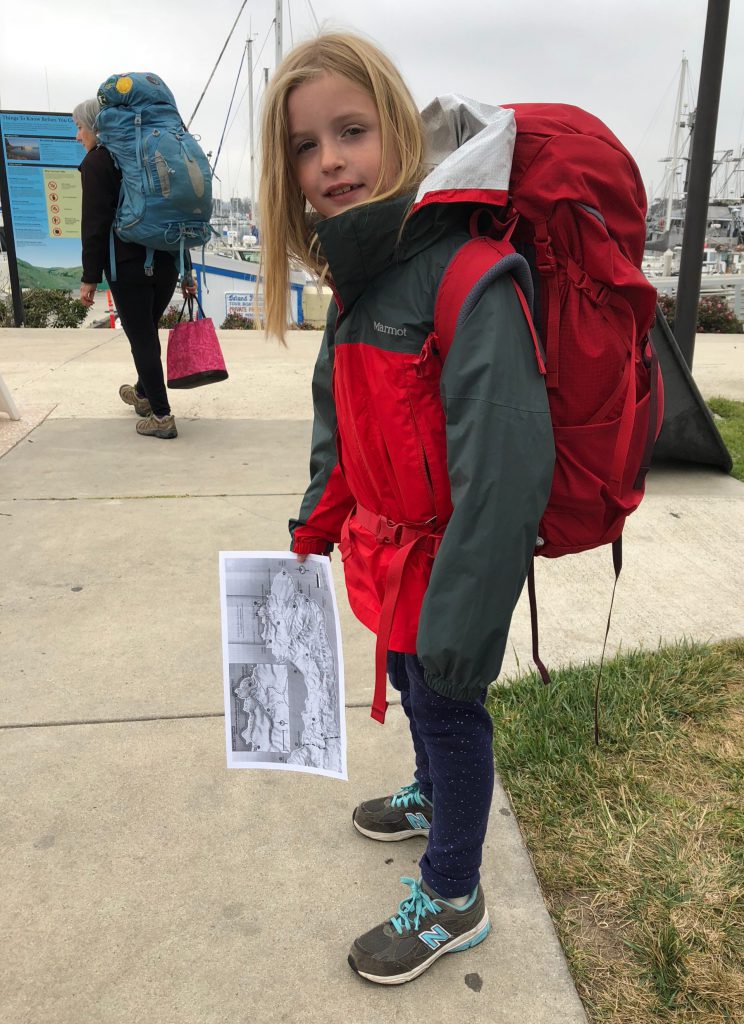 the ferry ride was mostly filled with day trip visitors to the island. so we stopped to check out a bit of wildlife, like these lazy sea lions. we also stopped to retrieve a balloon from the ocean, and the captain informed us that each of their boats pulls about 200 balloons out of the water per year. so, good job humans. 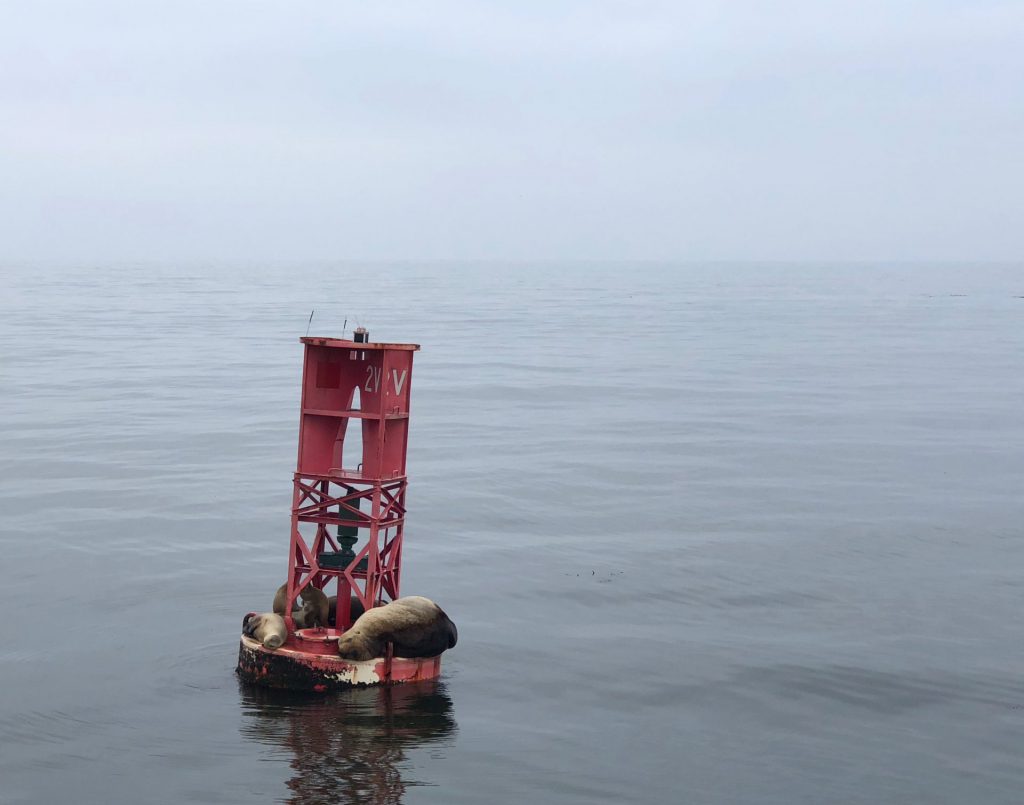 anna and i were bundled up, behind the captains cabin(?) to try to stay warm, but i ventured out to take a picture of the island as we approached it. so foggy. 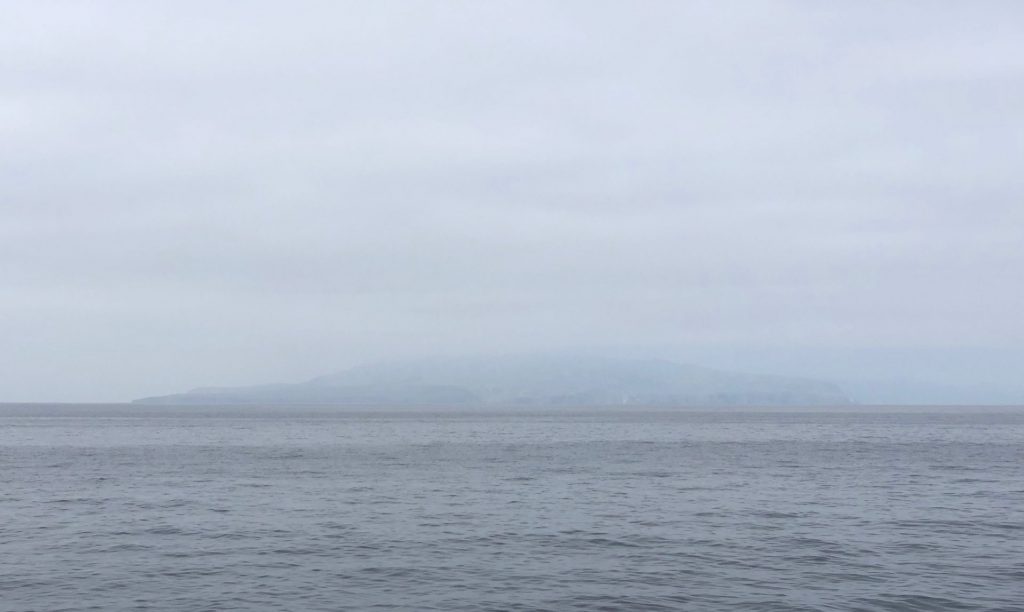 a few minutes later, though, everything changed. the sky cleared up to a lovely blue and the island came into view and everything was perfect. 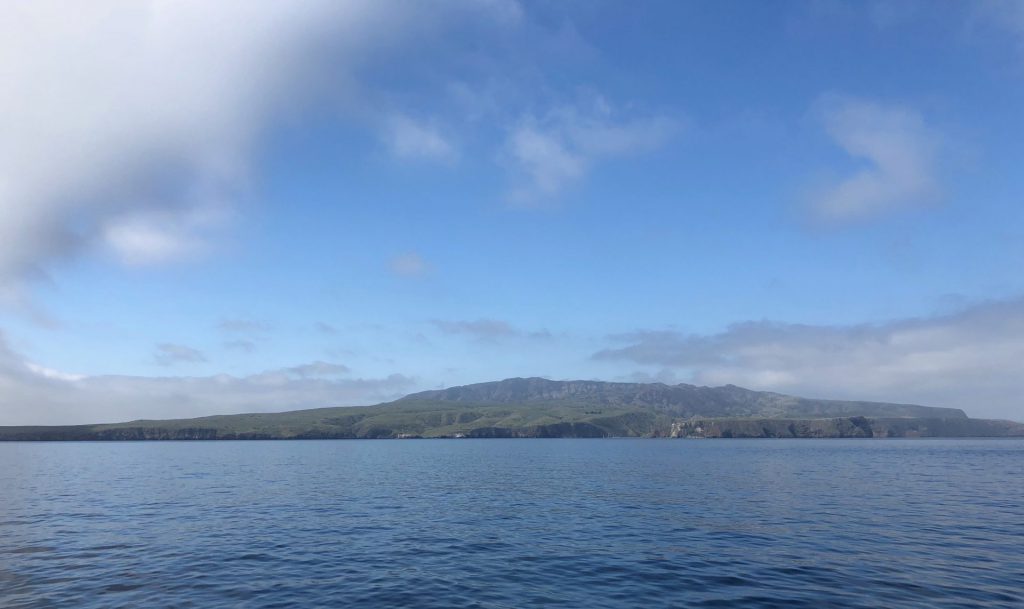 this kid was stoked. 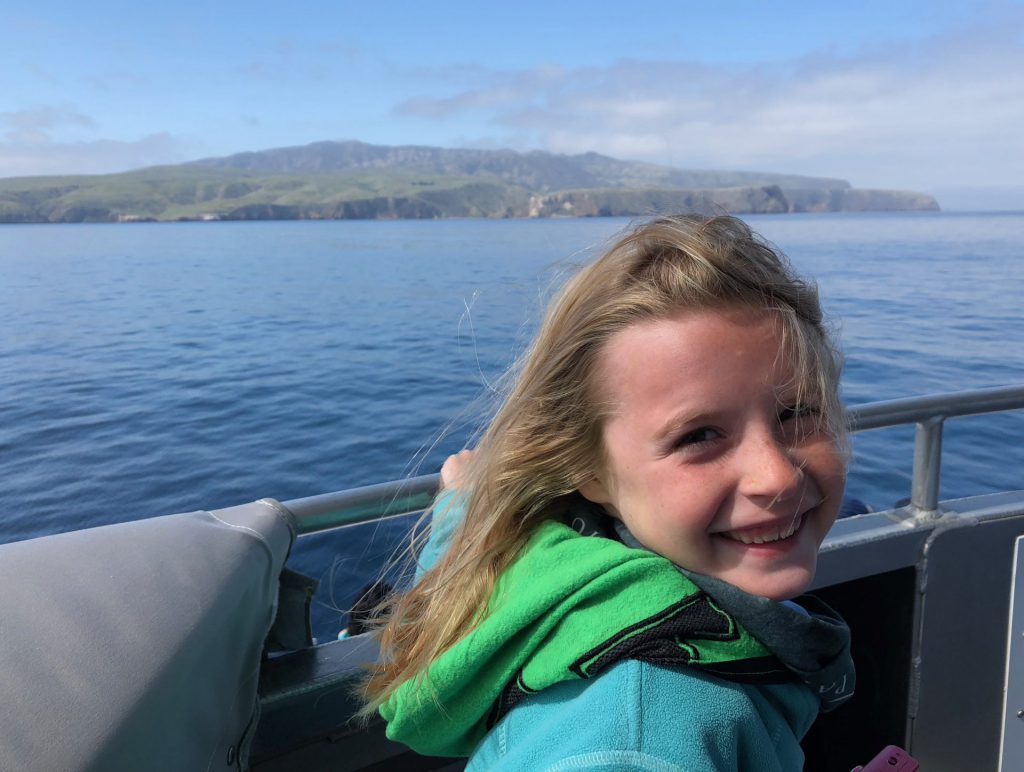 once we reached the island, we made the pretty short hike to our campsite. anna started strong, but it’s pretty clear we are going to have to build up her strength for longer hikes. 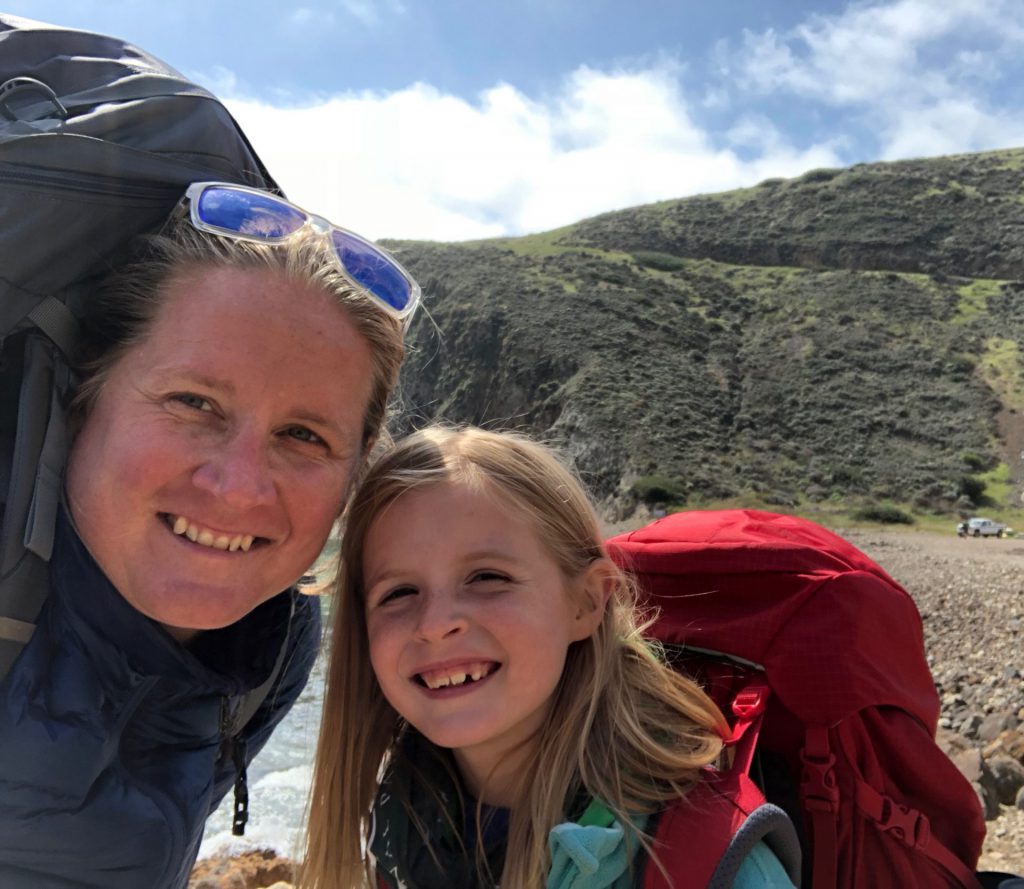 the first bit of the hike to the campsite takes you through the remains of “scorpion ranch”, leftover from about a century ago, when a family still owned the island and used to for sheep ranching. a lot of the buildings still remain, as well as a fleet of rusted out farm equipment. 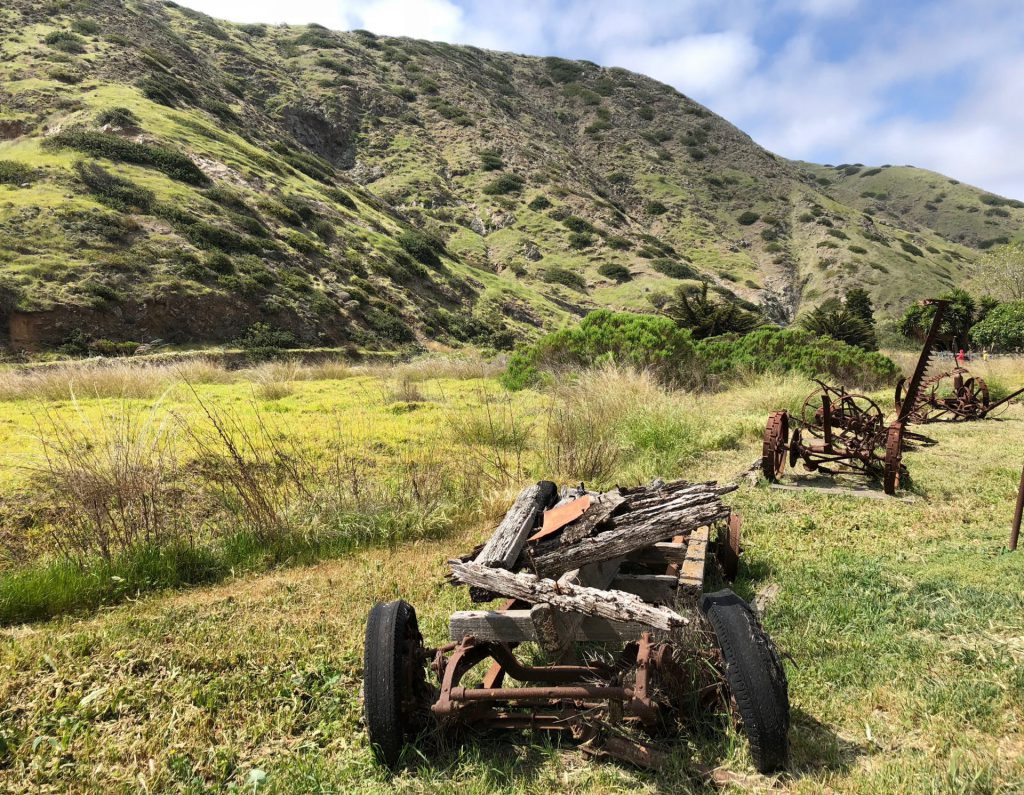 we finally arrived at our campsite, thankful that we chose #8, making the walk pretty short, and got set up. the campground only had a handful of people, one of the benefits of weekday camping. 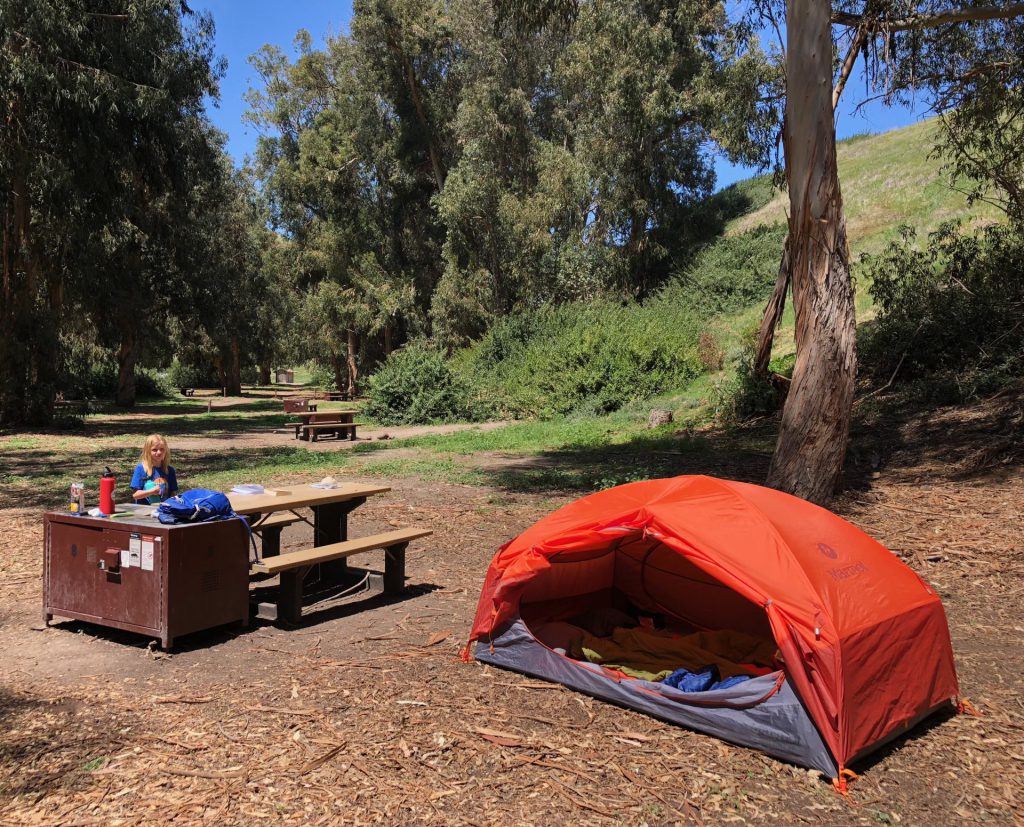 after a little bit of lunch (anna was excited to test out some camp meals), we climbed a hill that was next to our site, to see what the views might be. they weren’t spectacular enough for us to make the climb ever again, but it was nice enough for some photos. 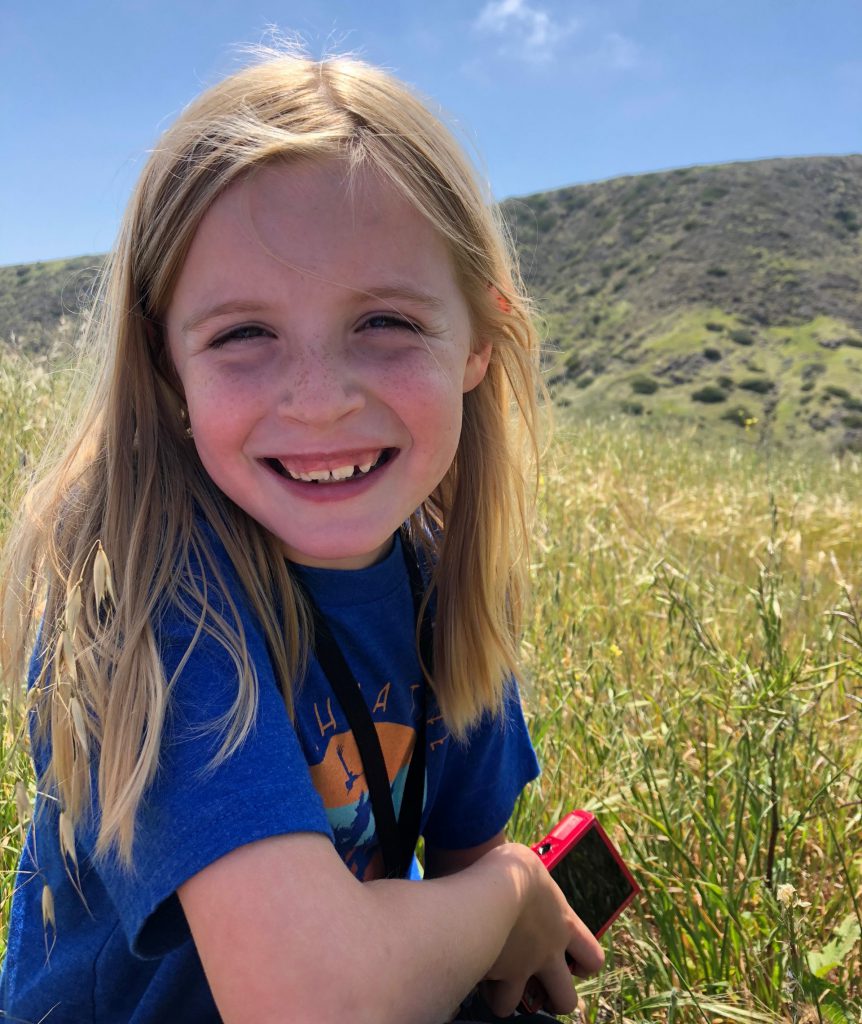 the canyon leading out to the water behind us is where the ferry dropped us off and we hiked in. 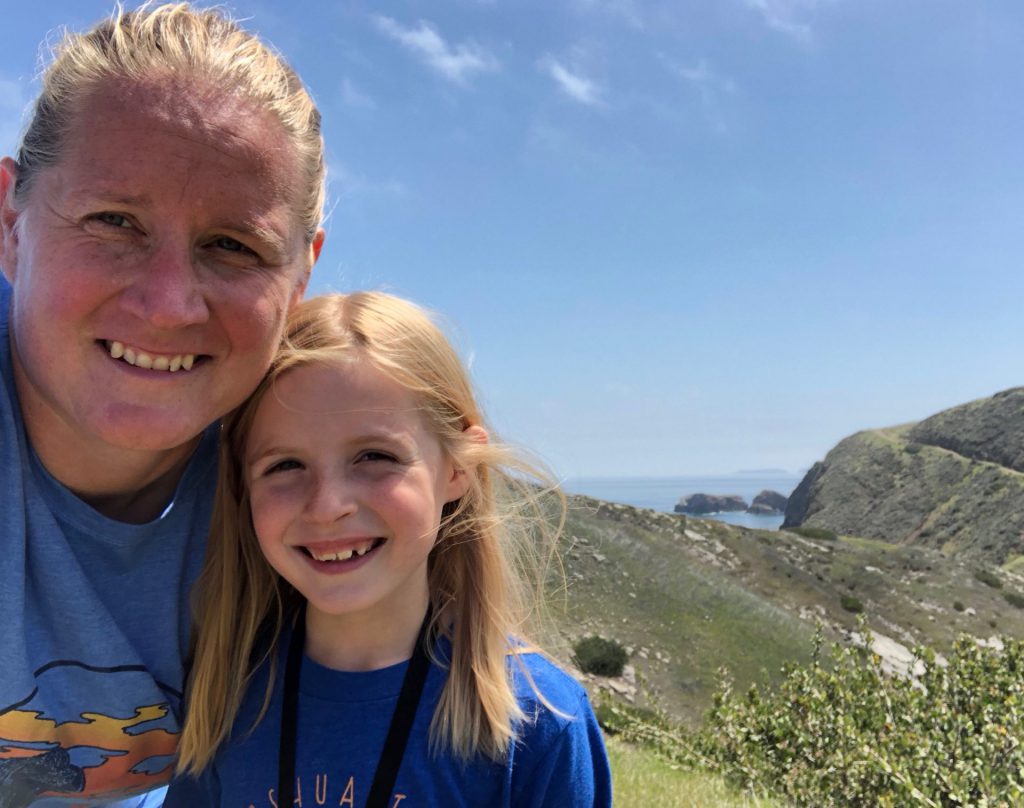 the scorpion ranch campground is home to quite a few friendly little island foxes, who are prepared to get into an leftover food, or your backpack, or your tent. but they are pretty cute, about the size of a cat, descendants of the mainland grey fox and only found in the channel islands. 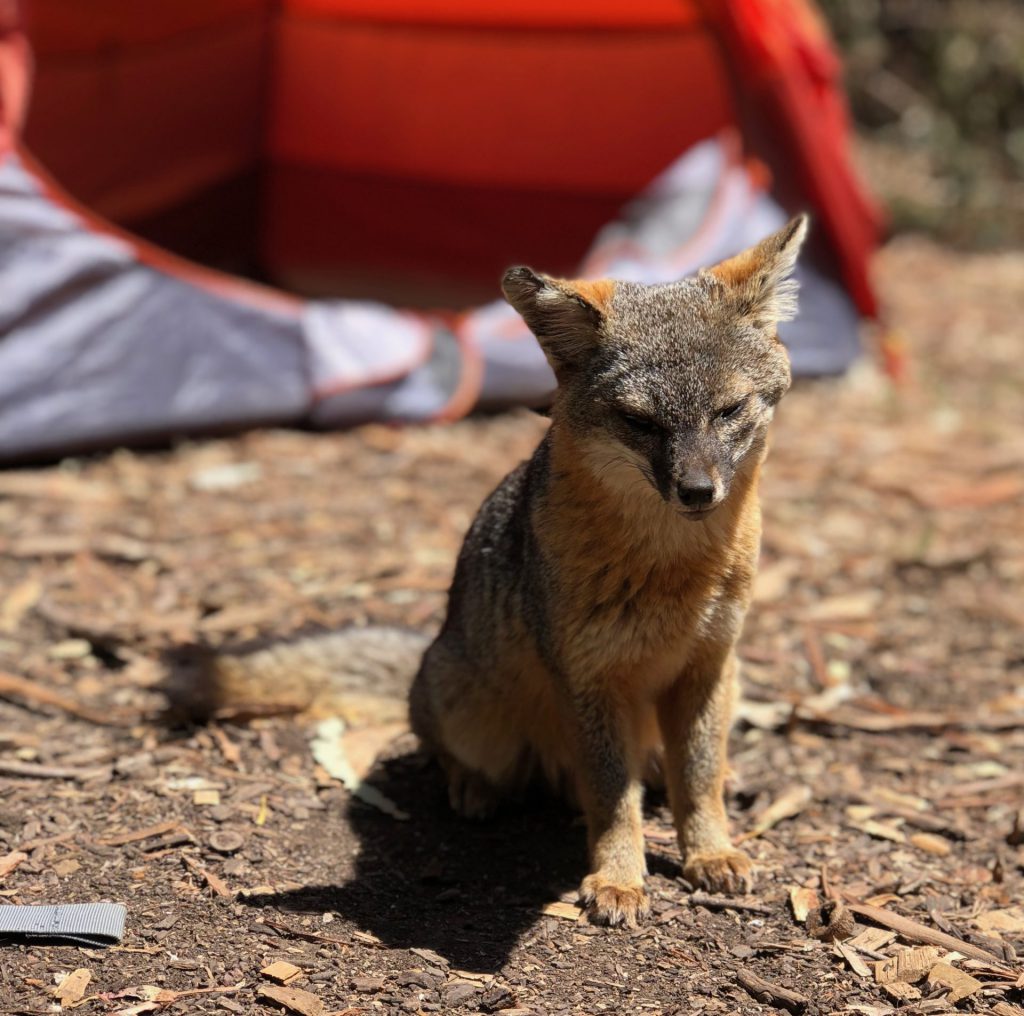 at this point, we had a good bit of afternoon to kill, so we decided on a two mile hike to cavern point, to take in this view. 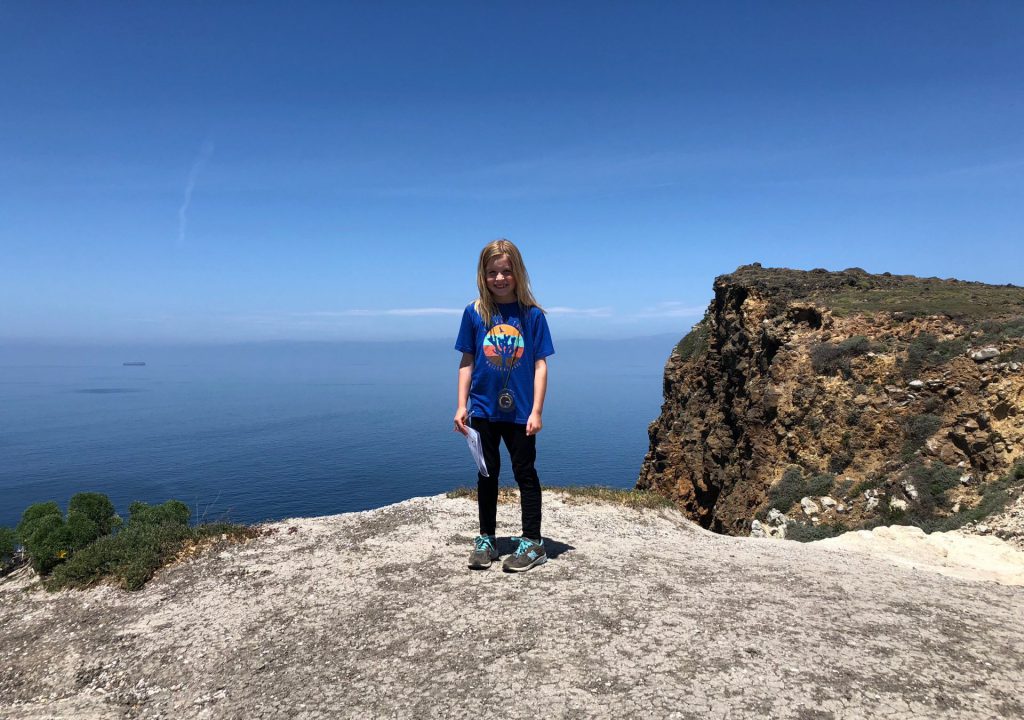 we stopped here for a break, where anna could work on her junior ranger book, and i could take 500 pictures of the view. 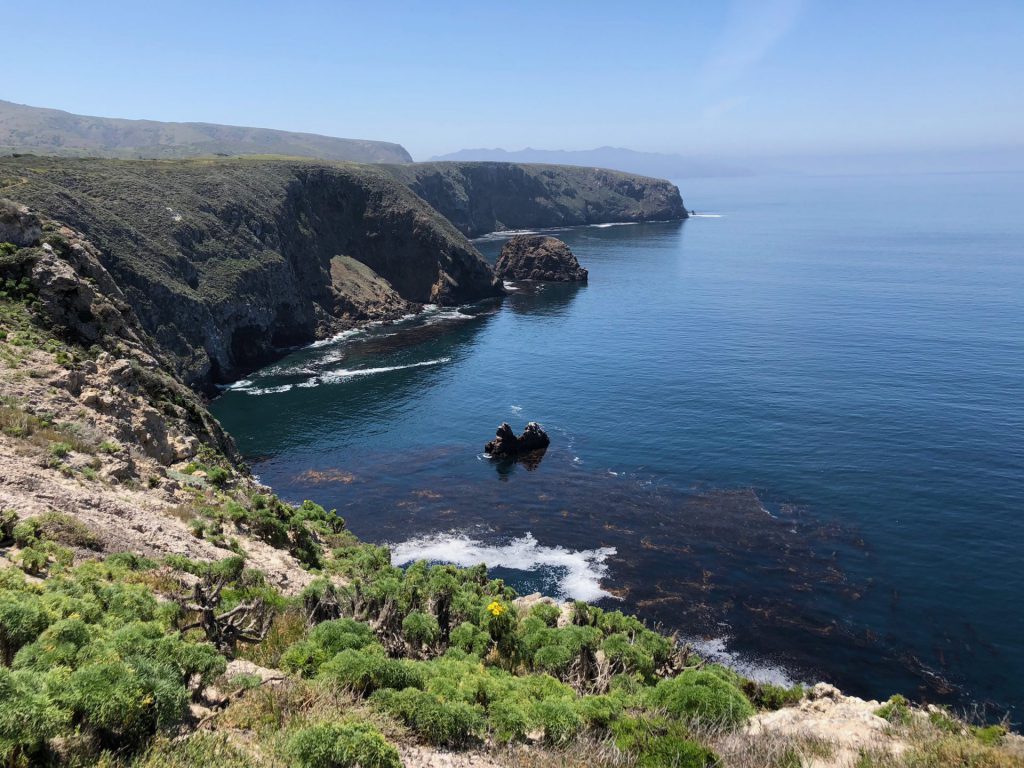 from cavern point, the hike took us back around to the bluffs overlooking the cove where we came in on the boat, with anacapa island off in the distance. don’t worry. between the two of us, we documented it well. 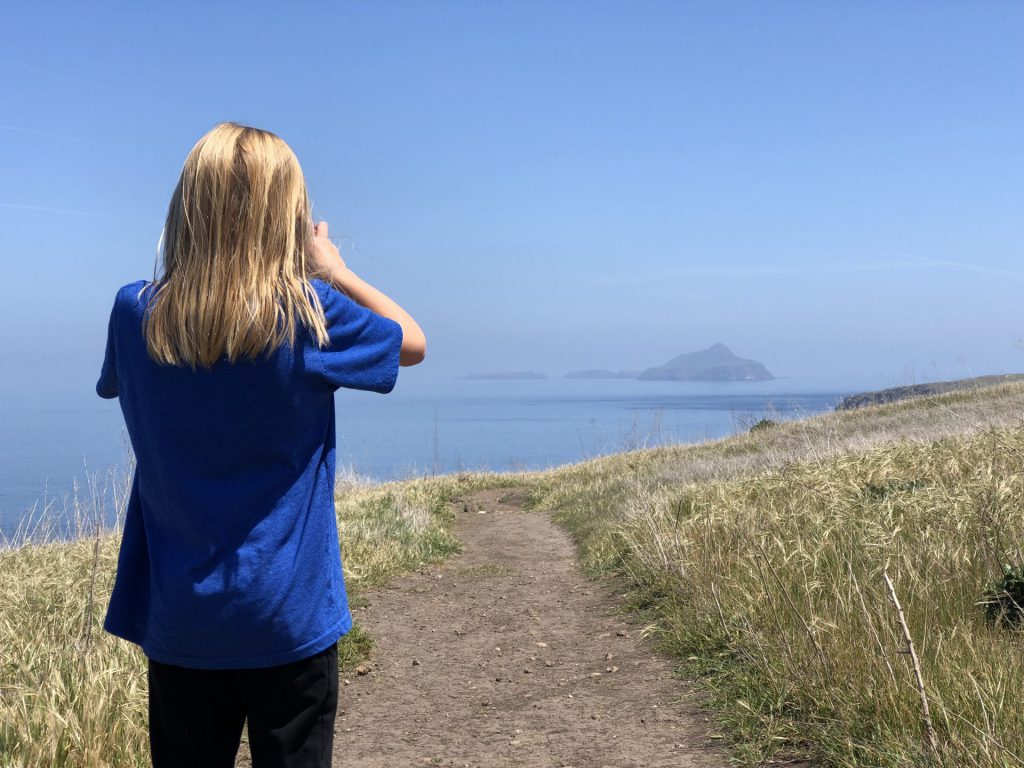 spring flowers are blooming all over the island making everything even prettier. 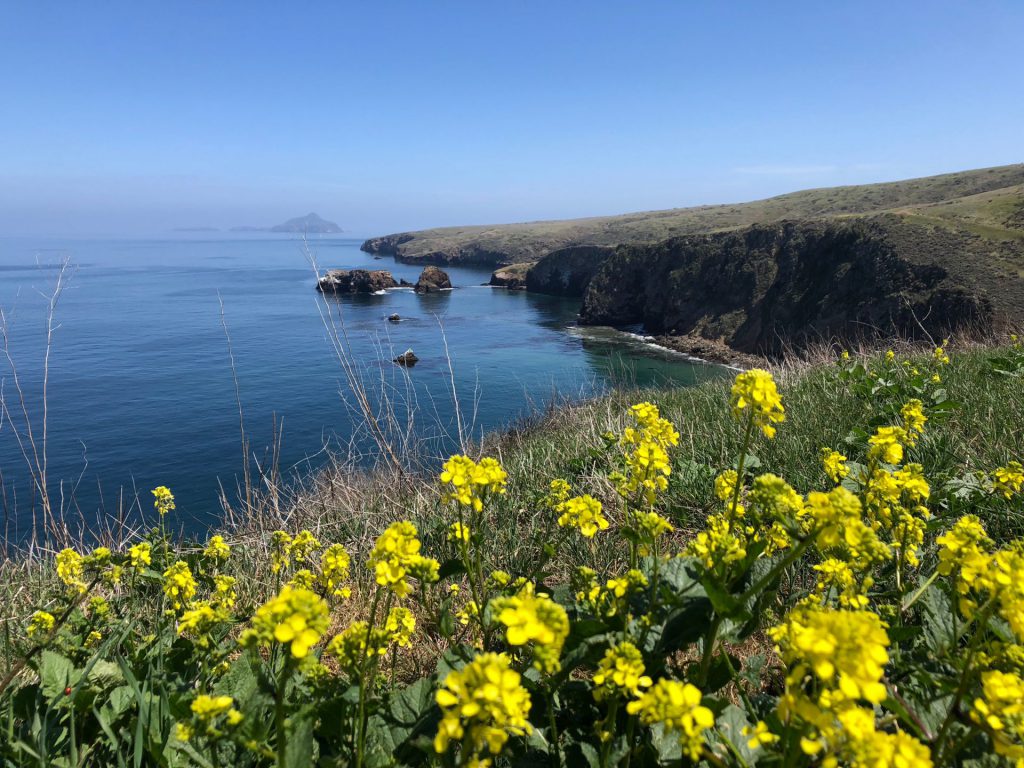 our little scorpion ranch cove from above. 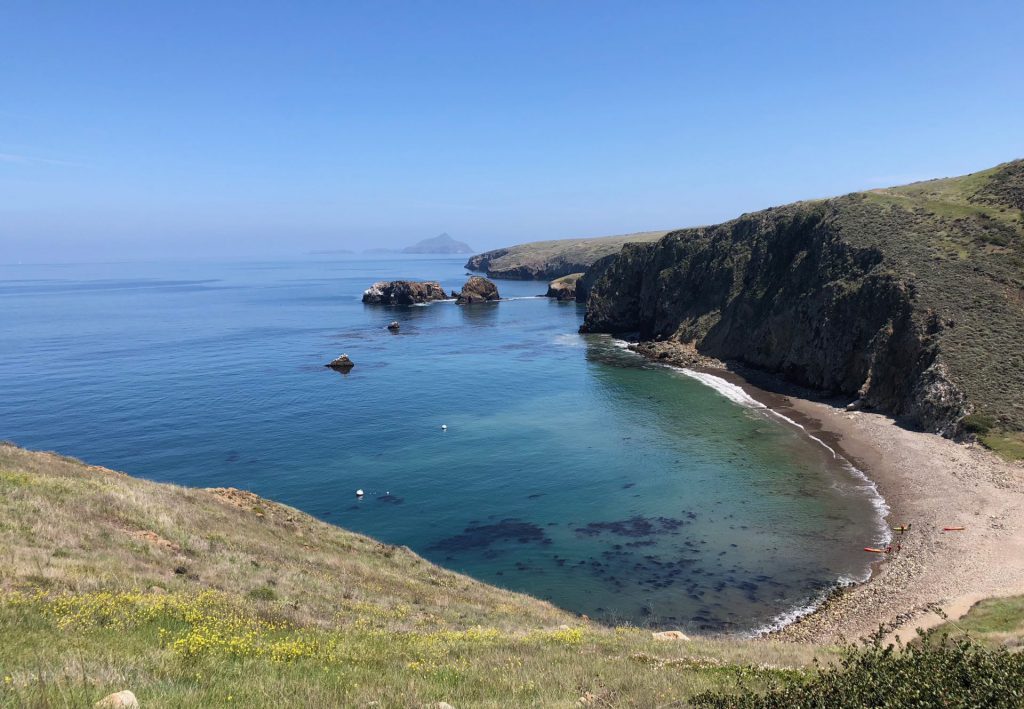 the hike brought us down and around to come out near the visitor center, so we strolled around a bit and learned more about the ranch. 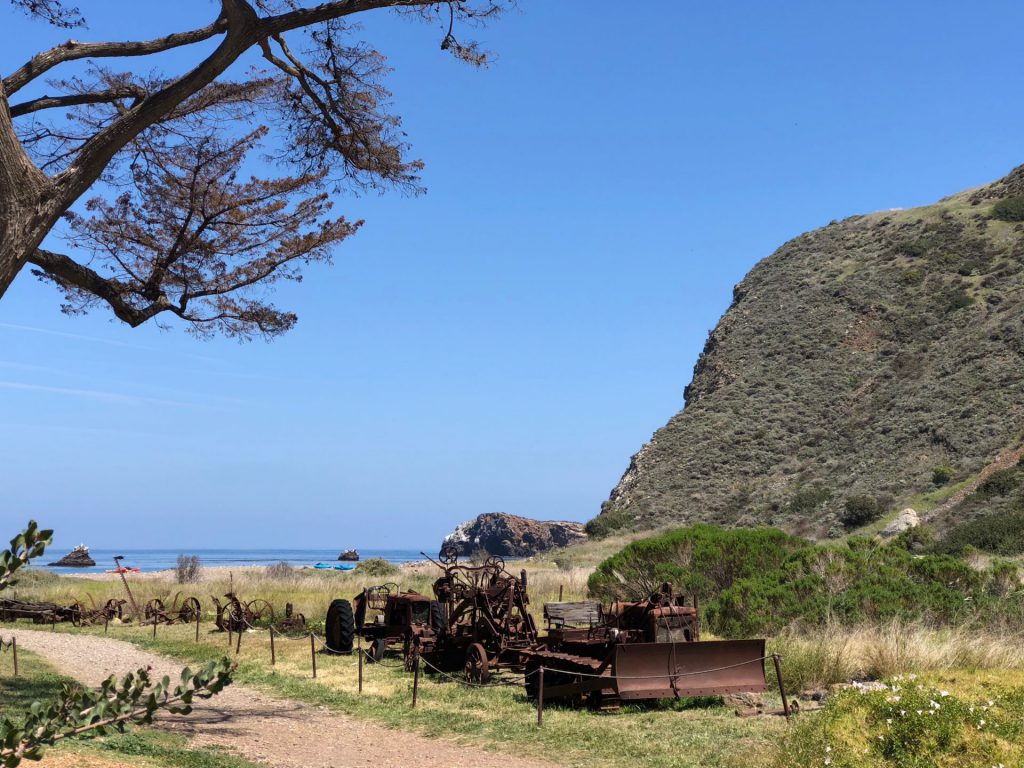 inside the visitor center, there read about chumash and ranch life and then recent efforts to return the island to its natural state after the introduction of non native species of plants and animals. (those cute little island foxes were on the brink of extinction not so long ago). 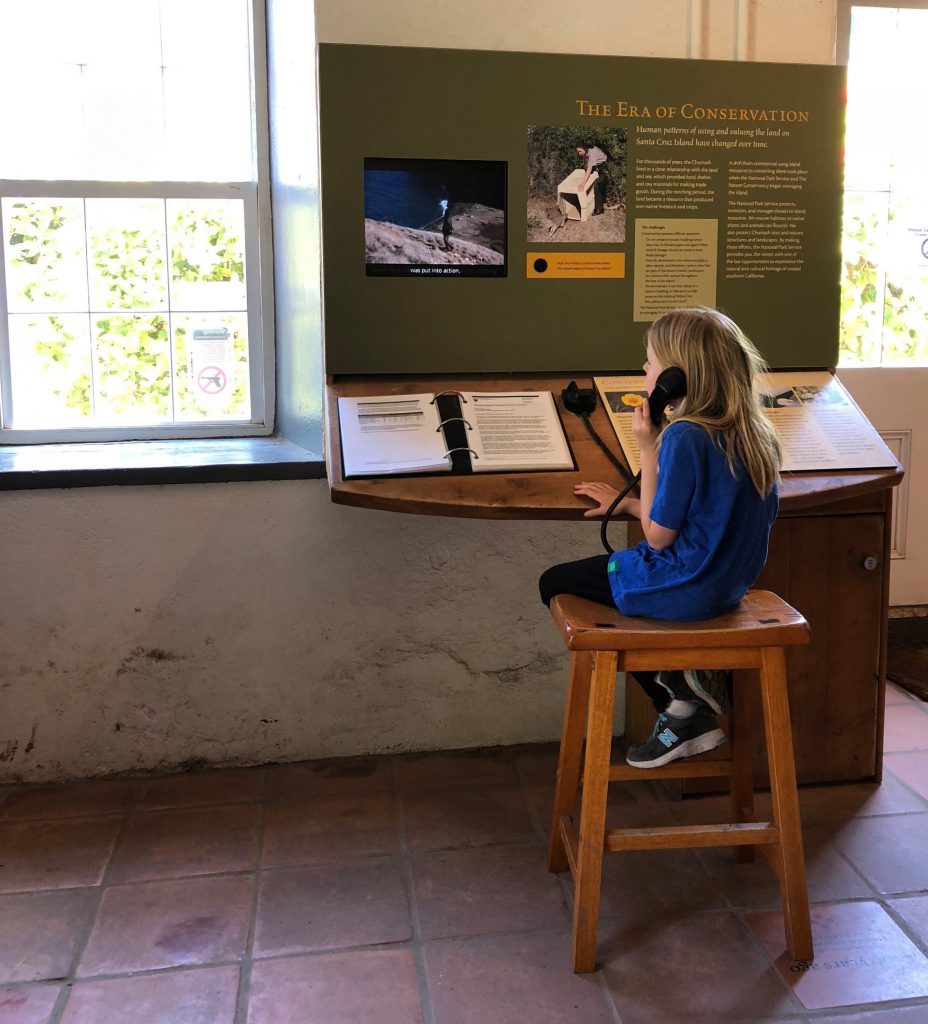 to end our hike/excursion, we walked over to the beach, because it was the only place on the island we could get a cell signal. i let everyone know we were safe and sound. and posted some cute instagrams. and we chatted with day trippers waiting for the boat back to the mainland. we also tested the water. results: it’s cold. 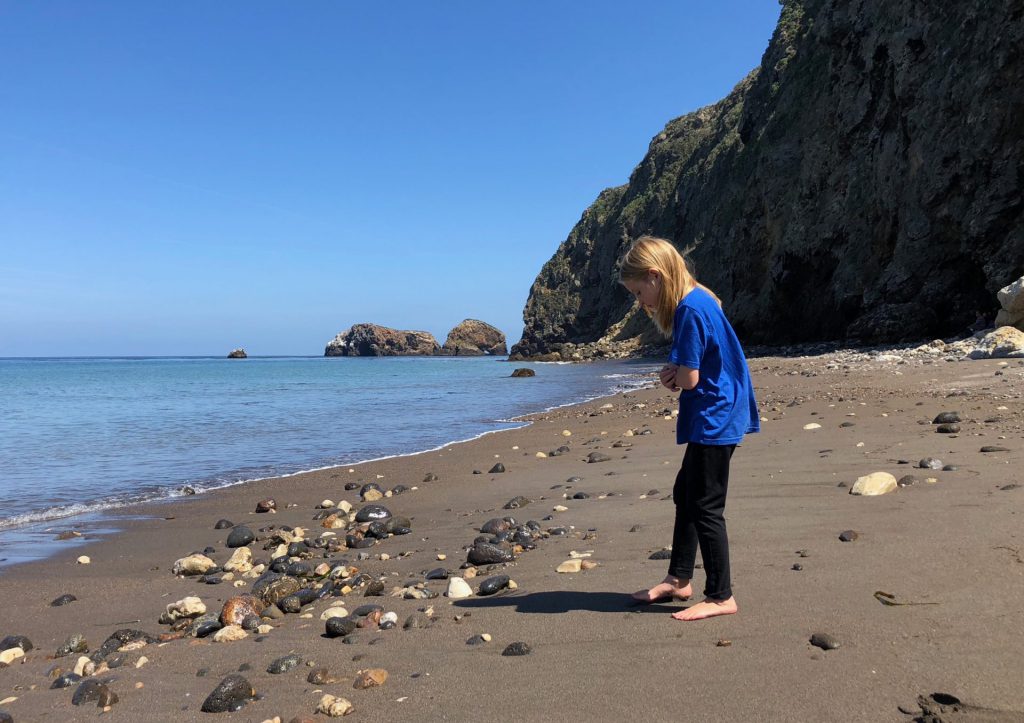 back at camp, we had a little dinner and then cuddled up in our tent. since campfires are not allowed on the island, when the sun starts to go down, it gets very dark and very chilly pretty quickly. we read for awhile and were fast asleep by like 9. stay tuned for part two of our adventure….

One Reply to “tent camping on santa cruz island.part 1.”