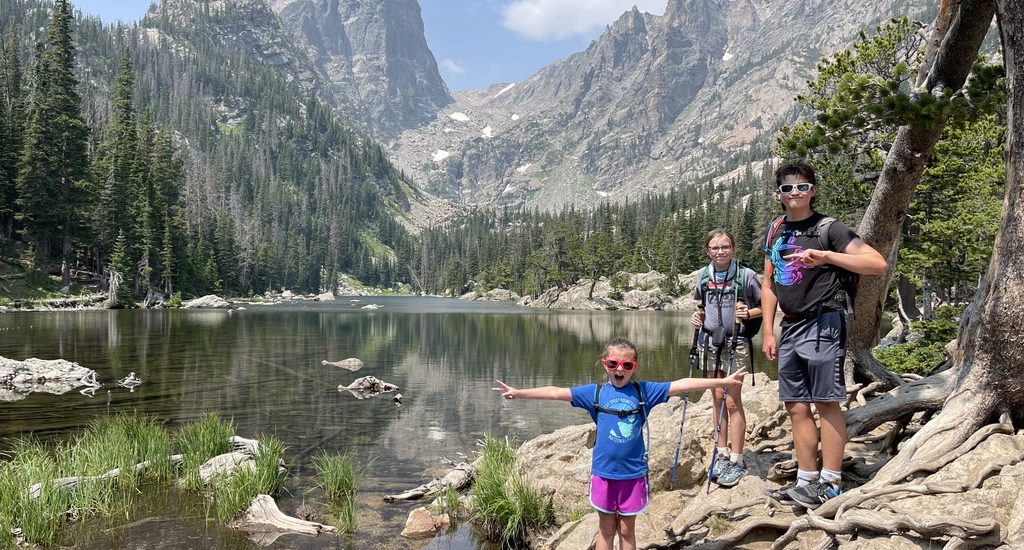 i wasn’t kidding. after our 5.6 or so mile hike to mills lake on our first day, we turned around and hit the trails again on day two. the grandlidboms were set to arrive that night for a couple of days, so i wanted to cram in all the things i could before they were here. the weather was absolutely perfect that morning, so we chose the hike to emerald lake, which is best viewed under clear and sunny conditions.

once again, we packed up snacks and waters, loaded up on the shuttle bus, and made our way to the trailhead. the hike starts in a pretty popular area (bear lake), and the first stretch is paved and steep, so it was stuffed with slow moving folk, who i would surmise were likely to turn back before long. once we were past the masses, it wasn’t long before we arrived at the first of three lakes on this trail, nymph lake. the trail wraps tightly around it, so we stopped for many a photo op.

then the trail ascends steeply for a bit. and it’s narrow. and very echoey. so while we shuffled along with fellow hikers whom we could not pass, we were inundated with obnoxious folk shouting into the void. after the steep climb, we continued over streams, through meadows, and finally arrived at the second lake, dream lake.

after dream lake, it was smooth sailing for just a bit, so let me take a moment to document just a snippet of what it’s like to hike with children. we reached this cool meadow boardwalk. hazel started walking out so i could take a picture of her. when she turned around and realized anna was hot on her heels and was also going to be in the picture, she was furious. so i had to call anna back, so hazel could have her time to shine, and all was right in the world (of hazel) again. those babies of the family. sigh.

the last stretch of the hike is no joke. lots of stairs and scrambling. and lots of rest breaks.

the kiddos hung in there and we made it to our final destination. emerald lake. not too bad, right?

the girls and i stripped off our socks and shoes and dipped ourselves in, to varying degrees. it was definitely chilly, but tolerable enough that anna went waist deep.

we ate all of the snacks and bribe treats and rested up. there were a lot of other hikers at the lake and it wasn’t as majestic as the previous photos make it seem. people yelling and hopping around. people jumping in and scaring off a family of baby ducks. and the banks were steep, so it meant a lot of people awkwardly navigating around and over each other.

but lots of people also means lots of folks willing to exchange photographer duties, and we scored this great family pic.

on our hike back, we detoured a tiny bit off the trail to scramble over to a waterfall. it was pretty cool, but hard to capture in a pic.

we hustled back, and i apparently didn’t take many photos. as i think back to this hike, i remember a general vibe of grumpiness as we hiked back down. i do know that isaac just put his airpods in and cranked his music up and ignored our family. teenagers. fun.

when we got back to the trailhead, we were pleasantly surprised to happen upon a little herd of elk, which included some juveniles. they were pretty close by and hung around for quite awhile, so we were able to get some really good views and photos.

the total hike clocked in at around 3.2 miles with 700′ elevation gain. like the mills lake hike, the altitude (10,125′ at the highest point) was our biggest concern, but it seemed like, with lots of breaks and water, we were doing ok with it.

that evening, we drove into the little town of estes park, to meet up with the grandlidboms who had just rolled into town for a couple of days. we had dinner at a burger-y type place and then walked around, finding a dairy queen for the lidkids usual post hike bribe ice cream.

on our way home, we spotted a herd of elk, grazing along the winding river in the meadow near our campground. so lovely.