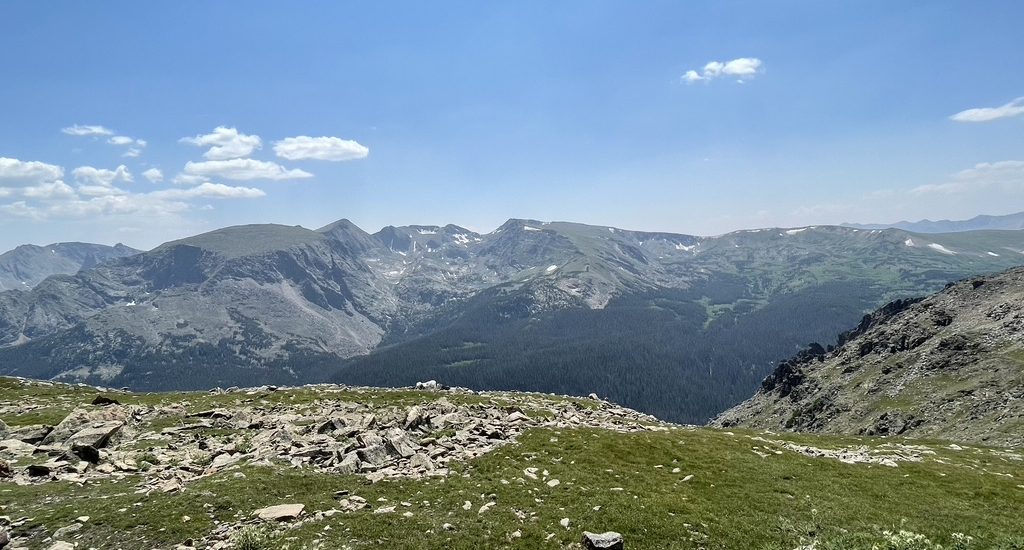 our big planned rocky mountain national park event with the grandlidboms was a drive along some of trail ridge road, aka: the highway to the sky. the road crosses (winds) through the park, maxing out at 12,186′ elevation, with breathtaking views in every direction. we fired up one of the guided tour apps and piled all seven lidboms into a minivan and we were off….

we stopped at several pulloffs, where we saw lots of strange alpine wildlife. pikas and very hardy plant life, to name a couple.

the vastness of the views is hard to capture in a photo.

lots of stops for views.

after we made our way up and over the continental divide, we found a pullout with a picnic area and had ourselves a proper lunch feast. hazel opted for traditional picnicking on a blanket.

on the way back, we saw two mooses. moose. meese. one was pretty far off, and had a baby nearby that i never could quite make out. the other was much closer, a female, grazing just off the road.

the girls hopped out to play on some scrambly boulders for a bit, but there were a lot of other scramblers, so we didn’t stay long.

after our drive, we went over to the grandlidboms little tiny cabin for dinner. i tried on my new socks that iin the massive gift shop at the highest altitude visitor center in the us. ruby was glad to have us back and glad to hang out on the back deck of the tiny cabin.

after dinner, the grandlidboms followed us back to our campground (with a bit of strategic carpooling, thanks to all of the weird rules and passes and parking situations). we had a campfire and s’mores and celebrated our last night with them.

in the morning, they left for another spot in colorado, and we decided to lay sort of low and drove over to the junior ranger headquarters. we had scoped it out on the trail ridge drive and it seemed pretty cool or at least something the kiddos wouldn’t grumble about.

on the way, we had the best moose encounter we’ve had to date. about 50 yards off the road, down in some deep grass and brush, a HUGE male was making his way along a little stream, grazing and generally ignoring the growing crowd of people creeping on him. i got these photos from the road with my iphone, so as to not be charged and rammed by a moose, but so many other people were much more aggressive and annoying.

at the junior ranger headquarters, we checked out a little explorers bag, filled with binoculars, magnifying glasses, thermometers and other kid friendly items for examining the environment. then we set out on a little half mile hike, armed with our tools, ready to do some scientific method. towards the end, we ran into a ranger who was giving a little talk on animal scat (and just handling it with her bare hands like it was no big deal). the kids were intrigued and maybe slightly grossed out. and when we were done, the lidkids were all sworn in and issued badges and the latest junior rangers of rocky mountain national park.

that afternoon, we strolled around estes park, searching for the perfect RMNP t-shirt for me (it was a fail), before i lost my patience with humans (tourists, specifically) and we went back to camp.

in the evening, derek took the kids over to the meadow near our campsite, so they could swim and frolic, while he got his fishing fix. they had a blast. they even had a surprise visit from some deer. and i didn’t mind just chilling with ruby and no other humans for a bit.