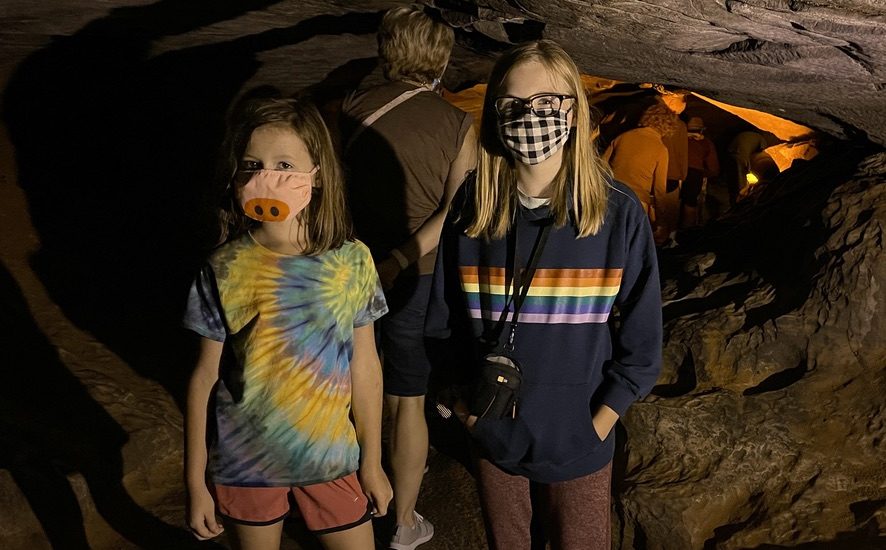 whelp. here we are. our final destination on the epic (not so) post pandemic summer road trip. after our time in st. louis, we rolled the lidbom rambling road show on over to kentucky, where we had a tour booked at mammoth cave national park.

after wind cave and jewel cave, i was anticipating a low key experience, but when we got to the visitor center, we realized that it was decidedly not low key. it was teeming with visitors and the parking lot was stuffed full. the visitor center was massive and we had to purchase our junior ranger books.

the girls worked on their ranger books (isaac opted out) while we waited for derek to arrive in the rv and then for our tour to begin. isaac was almost willing to go on this hike, until the ranger that was leading it was giving our little introduction and safety talk, and went quite a bit overboard regarding the danger and terror of this tour. isaac freaked out and bailed, leaving us to eat the cost of his $20 ticket. needless to say, we were a bit frustrated.

he went back to the visitor center to wait, while we went on the two hour, two mile “historic modified tour”. down down down, into the darkness.

aside from scaring isaac out of going on the tour, our guide was pretty great. we learned about the history and geology of the park. it was crazy how different this cave was from the previous two. the passages were wide and cavernous and we mostly shuffled along with our fellow tour counterparts in giant herds, grumbling about the number of people who were not wearing masks (despite the rule that there were no exceptions). we crossed a bridge over a “bottomless pit” which was not nearly as dangerous or terrifying as it was made out to be.

our favorite part was the “fat man’s misery”. the wide cavernous path suddenly shrunk way down and we had to file into a narrow, winding passageway, that would definitely be a tight squeeze for larger folk. like way larger. none of the folks on our tour got stuck. and it was not nearly as claustrophobic as it was made out to be.

after the fat man’s misery, we filed into an amphitheater, where our ranger told us all about the enslaved men who discovered much of the caves routes when they were used as tour guides in the 19th and early 20th century. he then prepared us for the final leg of the tour. we would pass through a room with a tall opening that extend up infinity feet. or so it seemed. there was a spiral staircase built next to it, and this would be the final boss level we would need to complete if we wanted to be above ground again. spoiler alert: it wasn’t as bad as it was made out to be and everyone made it out alive.

our loop popped us back out near the front and we all shuffled back out. we were bummed, because it was a cool 50something degrees down below and it was scorching hot and muggy above ground. but, i guess we had to come out some time or other.

the girls got sworn in as junior rangers one last time (on this trip) and like that, the trip was over. you know. minus the drive home and all.