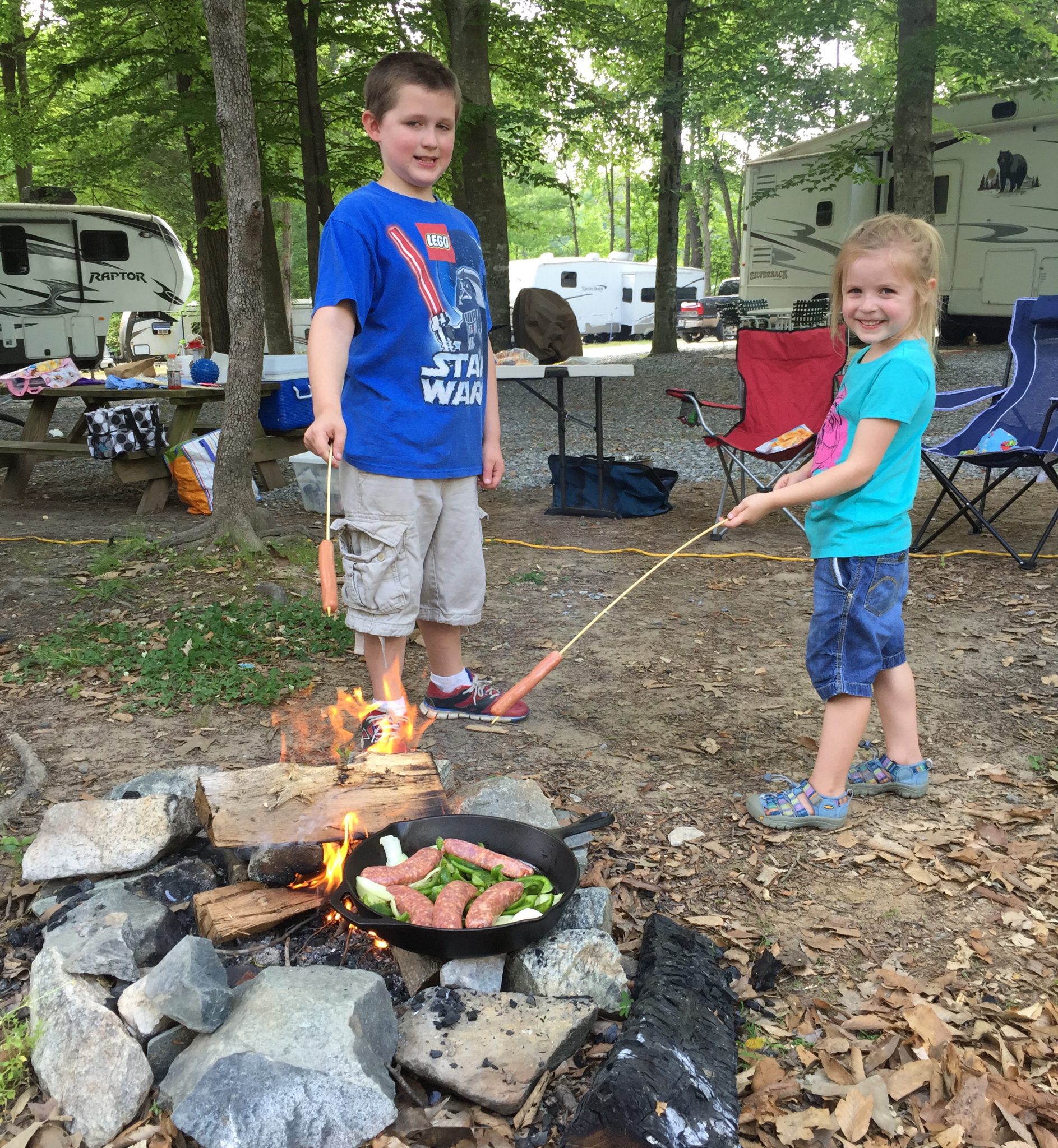 last fall, we attempted a family camping trip. (in a sweet circus tent). it was a little tough with a tiny, semi-mobile, terrible sleeping hazel, but we still had a lot of fun, so we decided it was time to give it another go.

this time, derek bought a super easy tent to set up (and take down. and dry out if it rains). we found a more open spot for the very mobile, much bigger and busier hazel. and we set up shop.

by the time we were all settled in, it was time for dinner, so derek got to work preparing italian sausages.

the kids went with the old standby. hot dogs.

hazel had her first not-cut-up hot dog in a bun. she’s a big kid now.

after dinner, derek took the kids to the lake to fish a little. derek’s dad bought anna this super cute little fishing rod.

anna was way more interested in fishing that i would have anticipated.

anna and the dad.

back at the campsite, we stirred up the fire for some marshmallow roasting. and by “roasting”, i mean “slight warming so as not to get any brown or tan or off-white”.

after hazel went down, isaac and anna snuggled under a blanket and were actually nice to each other for a few brief moments.

then. there was a very long night. hazel woke up at 2 am. and really didn’t sleep much after that. fifteen minutes here and there. some of the time, she just wandered around the tent, playing. i managed a few good stretches by dragging a chair into the tent and holding her. it was horrible. and it’s not like she was going to sleep in, because at six am, the bright sun shone straight through this roof, and we were all up and awake. hooray.

so, i pressured derek to hurry along with the coffee…

then derek took isaac fishing and i took the girls to the playground.

they attempted to color, but then we realized there were approximately 18 wasps hovering around us, so we made a quick departure.

back at the camp, hazel took a nap, while anna and i played quietly with figurines. or maybe i dozed off while anna played. i can’t remember.

derek came back with a dripping wet isaac, who had decided it was warm enough to swim in the lake. he and anna had lunch and derek took them back out to swim. i waited for hazel to awaken and when she did, we had a dorito picnic.

then we headed out to find the older kids and dad, stopping to feed doritos to the geese. super bi-polar geese. they were hissing at us, as they followed us around hoping for more doritos. geese are terrible. but don’t tell hazel that.

we took the kiddos for ice cream and then headed back to hang at the campsite. i gave hazel a good wipe down. she was as grubby as they come. look at this fresh baby-wiped face.

we had dinner. and then just hung out mostly.

we made the executive decision that one of us would take hazel home to sleep. we wouldn’t be able to function with another night like the first. after much deliberation, it was determined that derek would be the lucky winner of a good night’s sleep. :). so we packed up a lot of our camp and the baby and off they went.

the older kids and i packed some snacks and a blanket and headed over to a giant field where they were playing maleficent. anna really wanted to go. isaac didn’t. anna fell asleep. and isaac made me stay until the end. we were the only two except for a couple of pot smoking teens that rolled in for a little bit.

the second night of sleep wasn’t terrific, but it was a million times better. when we woke up, i packed up while the kids played. we went over to the rec hall area and had a delicious breakfast and waited for derek to come rescue us. and then he did. and like that, our fun family camping adventure was over.