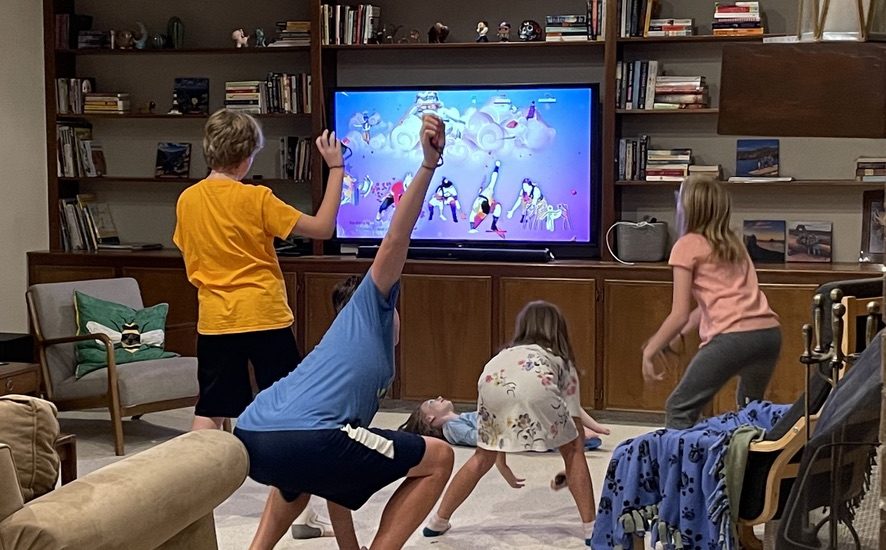 well. our epic summer road trip had to come to a close eventually, and we rolled back up to the stupid new house in early/mid-august. we had originally planned to spend a bit more time on the road, but as covid cases began to turn the midwest red, we scooted through that area a little more quickly. it was probably for the best though, because the rest of august ended up being a little bit crazytown.

first of all, while we were on the road, we hired a guy to remove our popcorn ceilings. i won’t go into the long and frustrating ordeal, but basically, the entire house was covered in popcorn ceiling powder when we got home. derek’s parents had already spent 20 or so total hours cleaning it up, and i spent at least another 40. it’s stuck in the carpets and crusted onto toys, furniture, musical instruments, etc. i may or may not have had a borderline mental breakdown over it. here’s some of the photos i snapped. the kids rooms and toy room were by far the worst.

we were very exciting to catch back up with old friends, and wasted no time in doing just that.

we happened to make the drive home from kentucky ON derek’s birthday. such a lovely birthday activity, right? we postponed his celebration until the following weekend, when his parents could join us, and we could have sufficient time to bake up a delicious girl-decorated cake.

i spent a million or so hours unpacking the camper from our trip, so we could prepare it for the winter. so much laundry. and finding places for all of our road trip accumulations. i enlisted the help of isaac in assembling the collection of mini fake lego sets we picked up to commemmorate our stops.

so. this school year is a big one. if i wasn’t just trying to get my blog caught up, i would probably devote a whole post to it. but, alas, i’m behind, so here you go.

the two big lidkids are going to school! public school. during a pandemic. they are both pretty excited, even if one of their faces doesn’t seem like it. isaac is in 9th grade at reagan high school and anna is in 6th grade at the brand spanking new lewisville middle school. they felt like this was a really good year to transition, especially since the district has been mostly virtual for the last 18 months, but also because all of their classmates will be in their first year at a new school.

here they are on their first second day. they start an hour and a half apart, so no cute back-to-school family pic this year.

the pickup and dropoff lines were slightly insane in those first few days, and i was worried that i was destined to spend four hours in my car every day. it’s a little better now and we have found some work arounds. 😉

anna and i thought it would be fun to make a side by side comparison of her with the same backpack she had in her brief experience with kindergarten and this year. it’s still massive. but it needs to be. check out these school supplies. that was a whole other ordeal. we purchased all the items on the district list. then received a different list at open house. and then anna changed teams between open house and the first day and got another list. so. much. fun.

this kid is not in school. she started out pretty excited to have me all to herself. we celebrated with a tiny funfetti pancake breakfast.

but, things took a turn when she realized that i wasn’t going to spend the entire time entertaining her. and that the time that i would normally do other things and she would play with siblings was now REALLY boring. she let me know how she felt about it. we actually didn’t start school right away, so i could get settled in with our new routine. she found other ways to educate herself.

in an effort to make our home more functional for this stage of our life, we began our first bigger home improvement project in the stupid new house. i have hated the wet bar in our living room since day one. it has always been a makeshift computer area (with circulation obstructing seating) and charging station. we store a few things in the cabinets, but otherwise it’s a stupid waste of space. i have wanted to make it into a more functional office type space, and now with the kids in school, it was even more important to give them a space to do homework, charge chromebooks, and the like. so, we began the destruction. stay tuned for updates.

no blog post would be complete without a gratuitous amount of ruby photos. she was so happy to get home, where she has a number of possibilities to sleep lazily, and isn’t restricted to the back of the rv couch. not to mention, free reign, all day, patrolling the yard versus leashed walks at our discretion.

lastly. some miscellaneous august happenings. i returned to sewing (posts to follow) and a did a bit of easy cupcake baking for my pal jen’s birthday.

also. it’s finally football season again (preseason to be exact). and we couldn’t be more excited. and back at home, hazel was happy to be reunited with some favorite activities. play doh and perler beads (not shown) to be exact.

anna got busy filling my fridge and walls and windows with notices and announcements. she has an entrepreneurial spirit. too bad i can’t afford her services. lastly, in august, the boy was finally able to be vaccinated. we couldn’t get him squeezed in before the trip, and didn’t want to do it in two locations (or risk severe reactions) while on the road, so as soon as we got home, we got him his first jab.

there you have it. crazy august.