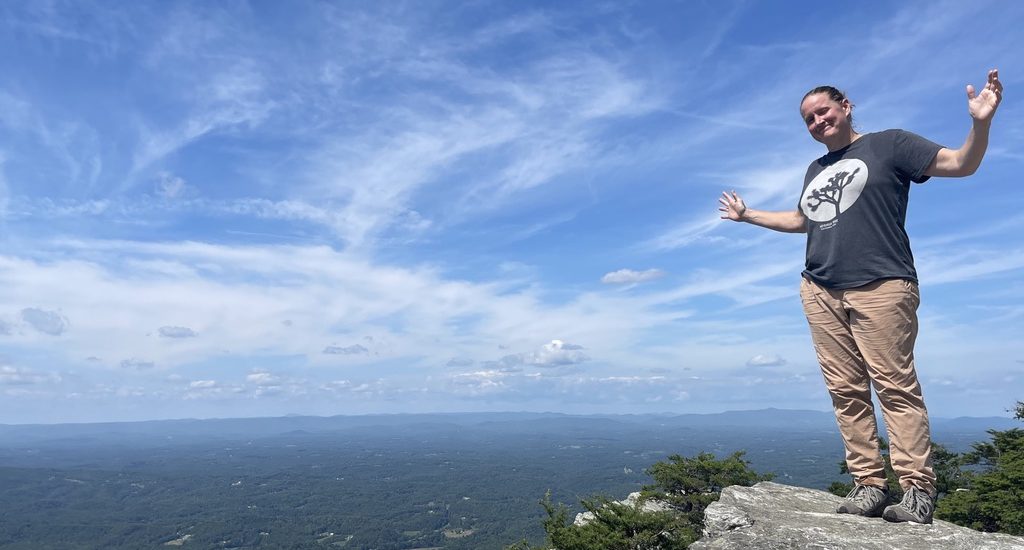 september was a really hard month. we had a close friend who lost their son to suicide. it is the single worst thing i have ever watched someone have to go through. it has cast a sadness over everything.

before all of this, anna and i had ourselves a perfect saturday. first, we hit up the cobblestone farmers market, along with a new friend who was camping in our driveway in their rv. we partook in camino bakery for sweets and coffee, listened to some fun music, and purchased all manner of local provisions.

that afternoon, we cruised up to hanging rock to hike to moore’s knob. we hiked this same hike in january in the snow and it was much nicer. unbeknownst to us, beneath all the pretty packed down snow was a trail made of rocks and ruts and misery. we eventually trudged our way to the top, for the pretty views, and then marched back down, vowing to never do that trail again.

isaac got his second covid shot. which would come in handy shortly.

and. we finished up the little office area where the bar was. well, not really finished. we couldn’t get the desk and table that we wanted, so i moved my sewing desk out to become the computer desk, and we ordered a foldable table for now. the bookshelf used to be in my sewing room, but it was where all the homeschool, craft, and school supplies are kept, so it makes more sense in this area for now. we just put down vinyl peel and stick tiles, because eventually we will replace all of the flooring, and this was the cheapest option. so, i present to you, our hacked up school and office space which is still a thousand times better than having a wet bar.

hazel has been having a tough year. she really misses isaac and anna and is pretty lonely. anna has tried leaving her notes, sometimes with promises to play. she doesn’t love doing the actual school part of homeschooling and prefers to just play all day. we sometimes kill extra time in our day with a big pancake breakfast, complete with sprinkles and powdered sugar. mostly, we are just trying to figure out how to survive this year together.

september brought the kickoff to the football season. hazel made herself a magformers helmet. derek got me my very own josh allen jersey. and we settled in for the first game, which was a disaster, and i can only be in good spirits about it now, a month later, because the bills have dominated every game since and are looking fantastic.

in related news, i added to our bills fan gear, by “crafting” this no sew fleece throw blanket. i picked up the fleece while we were in western new york this summer, and found the red and white gingham down here to match. now we all fight over who gets this one. (we have another older one). also, in craft related updates, i went to a workshop with our driveway rv friend, where i learned a bit of embroidery. i picked up this little coral reef sampler and i have been working on it diligently. until i got to that one green seaweed leaf and now i hate it and might never finish. (i have three leave to go).

one morning, i woke up with a sore throat. no big deal, i thought. just allergies.
the next day, i felt worse, but just like a cold. i took an at home covid test, just to be sure, and it was negative. no big deal, i thought. just a cold.
that night. i felt awful. so bad. and the next day too. i slept a lot. fever. body aches. chills. a little bit of intestinal issues. ;). headache. stuffed sinus. cough. this sucks, i thought. maybe i’m just a big wuss and this is how i handle colds now that i’m old.
the next day, i was a bit better. still not great. but derek had booked a covid test at the pharmacy the day before, so i went ahead and took it. assuming it was just a formality.
on the fourth day, i was great. still a little cough-y and stuffed in my sinuses. but no other symptoms. then, i noticed i couldn’t taste or smell a thing. so, i took the at home covid test again. and it was positive. the next day, the results from the pharmacy test confirmed this.

so. we called the schools. turns out, since isaac was vaccinated and had no symptoms, he was not required to quarantine. but anna had to quarantine for three weeks, from the first day i had symptoms. she was furious. she really likes school. virtual school is no fun. and she was going to be missing some good stuff. for the first week and a half, she did a lot of baking and painting. and hazel was so glad to have her home.

but virtual school really was the worst. it’s not like last year, where there were meetings and lessons and stuff. she just gets assignments and we were pretty much on our own. there was a lot of frustration and tears, but we muddled along. i can’t imagine how someone who is not a stay at home mom, who has not had experience in the different softwares and programs, and who is not a former teacher might handle all of this. of course ruby made for a great study buddy.

speaking of ruby. she’s really the best most cutest and i apparently took a million pics of her in september. mostly sleeping and snuggling. and one with her turtle friend in our driveway.

and that’s september. onto fall….